I made it out to the barn a little after 10 due to needing to gather supplies for the bathroom remodel. And OMG, the bathroom is going to be awesome and due to a reader, who is also Amanda’s student and has joined HCWE, we think we have a line on the countertop!!! (Thanks so much T and S!!!) We will have more on that after Monday morning, which is when we are meeting up with the person who is helping us. I will have an update on the bathroom tomorrow. The weather was awesome and the footing in the outdoor was great, so Flambe and I decided to ride outside in the sun.
Ashke was soooo good. No spook. No snort. He just walked next to Kat on a loose rein as we warmed up around the outside of the arena. Kat has been having some issues with learning to relax at the beginning of the ride, and having Ashke next to her for the first little while is a great help. We had finished walking in one direction and turned to go in the other when Flambe asked if a trot was okay. I said of course and asked for a trot.
Have you ever seen the video on FB with the gray horse in the jumping ring that makes several circuits of the arena in a dolphin leaping motion?
That was Ashke, but instead of leaping forward and kicking out in a fifteen to twenty foot arc, Ashke was doing that in about five foot increments. It felt like he was trying to canter in place, but with some loft. 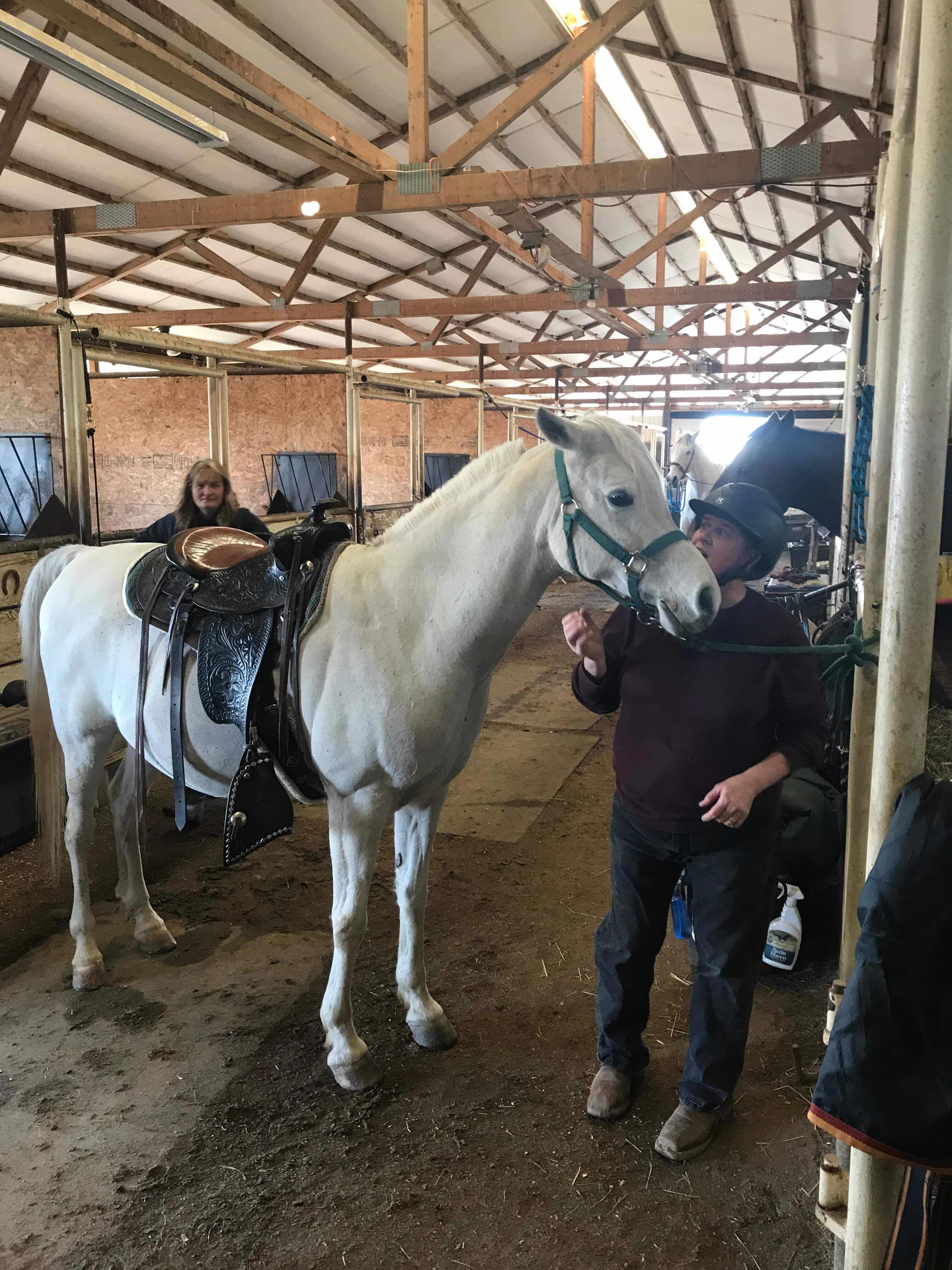 I got him stopped and looked over at Amanda. Her mouth had dropped open. I looked back at Flambe and said, “I think we need to go work on some stuff without you and Kat.” We moved away from them and started working on our trot serpentines. See, Beau was in the arena with us. He is an Oldenburg-Arabian (I think - some kind of warm blood Arab cross) and he and Ashke each other. With a passion. I think Ashke was puffing up his chest in response to Beau being in the arena. He settled as soon as I asked for some work.
We worked trot serpentines and I concentrated on keeping my hands still and asking for the change of bend with my legs. He was responsive and I could really feel the change through his body as he moved from one half circle to the next. I added in leg yields, which are progressing, and then some half-pass at the trot. The half-pass is getting better too and he felt like butter between my aides.
We took a small break, talking to Amanda in the center of the ring. Beau and Ashke took turns pinning and snarling at each other. It was the funniest thing I have ever seen. One would pin and glare, then their ears would come up and the other one would react.
I started my canter serpentines with the change through the walk. Again, Ashke was really good. He was listening and not offering the change. I set him up well and got a couple of nice flying changes, then asked Amanda to watch. The second time, I didn’t shift my weight or my shoulders and locked him up through the hips. He was trying to change but I was blocking him. Amanda said “the first one was really good.” And I said, “and the one that wasn’t was entirely my fault.” She said “yep. Hard to change if you are blocking his hip.”
I played a little with the canter half-pass, circling around in the direction of our bend, then the third time, I asked for the change, which was smooth and easy. We then did the canter half-pass to the change to the half-pass in the other direction. I was careful to ask properly for the change and although the change in bend wasn’t immediate, he was able to give me that movement better than he had on Thursday night. Then we did it again, and that time was immediate and when I requested.
He’s so freaking smart.
We finished with transitions within trot and his medium trot is really getting good too. My plan at this point is to ride Intermediate A this year, and practice the obstacles with flying changes during the speed round. That way, we can pick and choose which obstacles we do the flying changes on, and I can transition to trot if he is feeling tired. It will also help him develop his strength to do them. When we could have 50 changes in an EOH round, I would rather err on the side of developing as he is ready rather than pushing him. 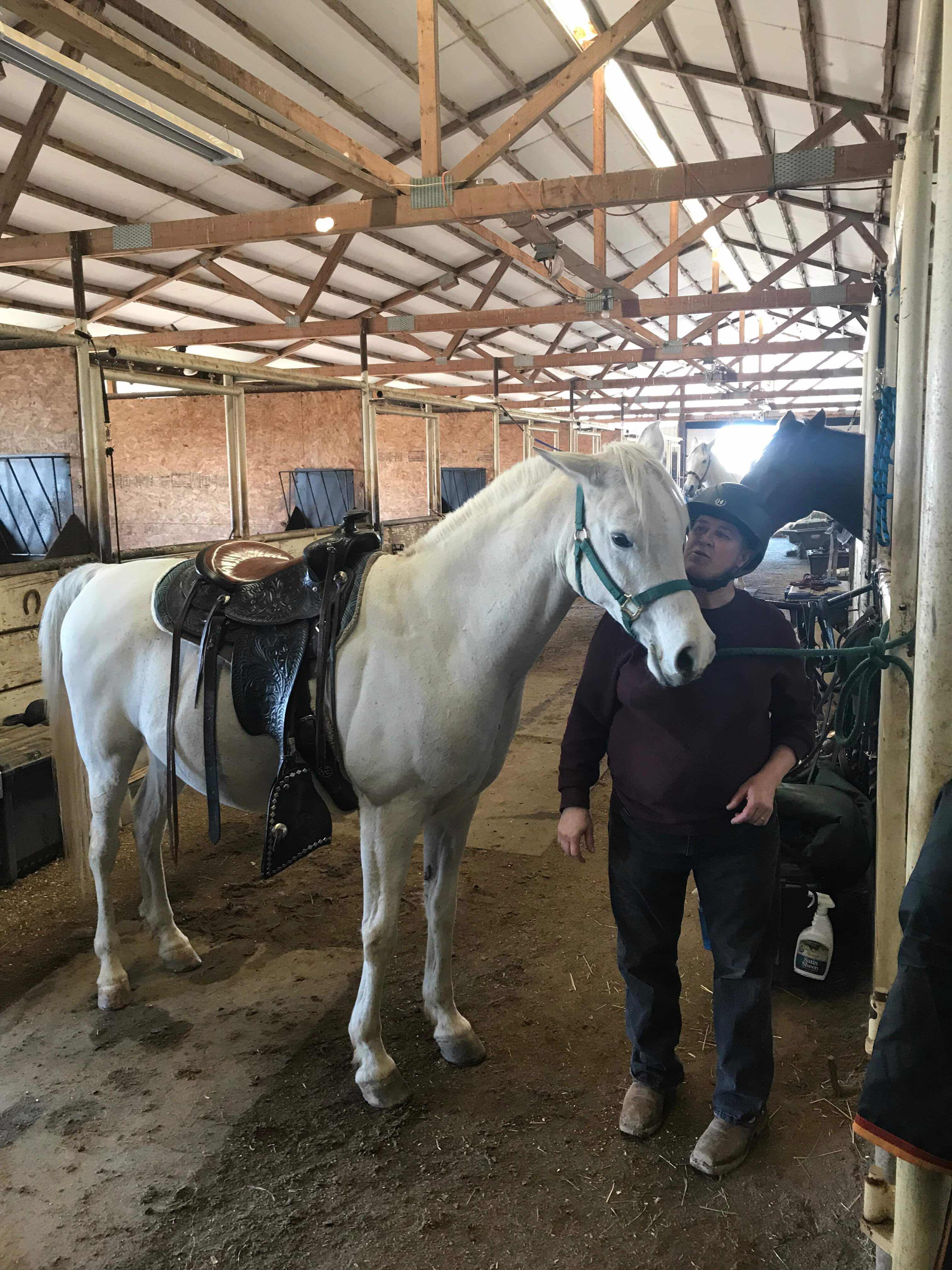 Not impressed with my shit