Tuesday was spent at Disney. Tristan was absolutely convinced that Disney was for little kids and that he was going to be bored out of his mind. It was awesome to have him say “that was so much more fun than I expected. I had so much fun.” 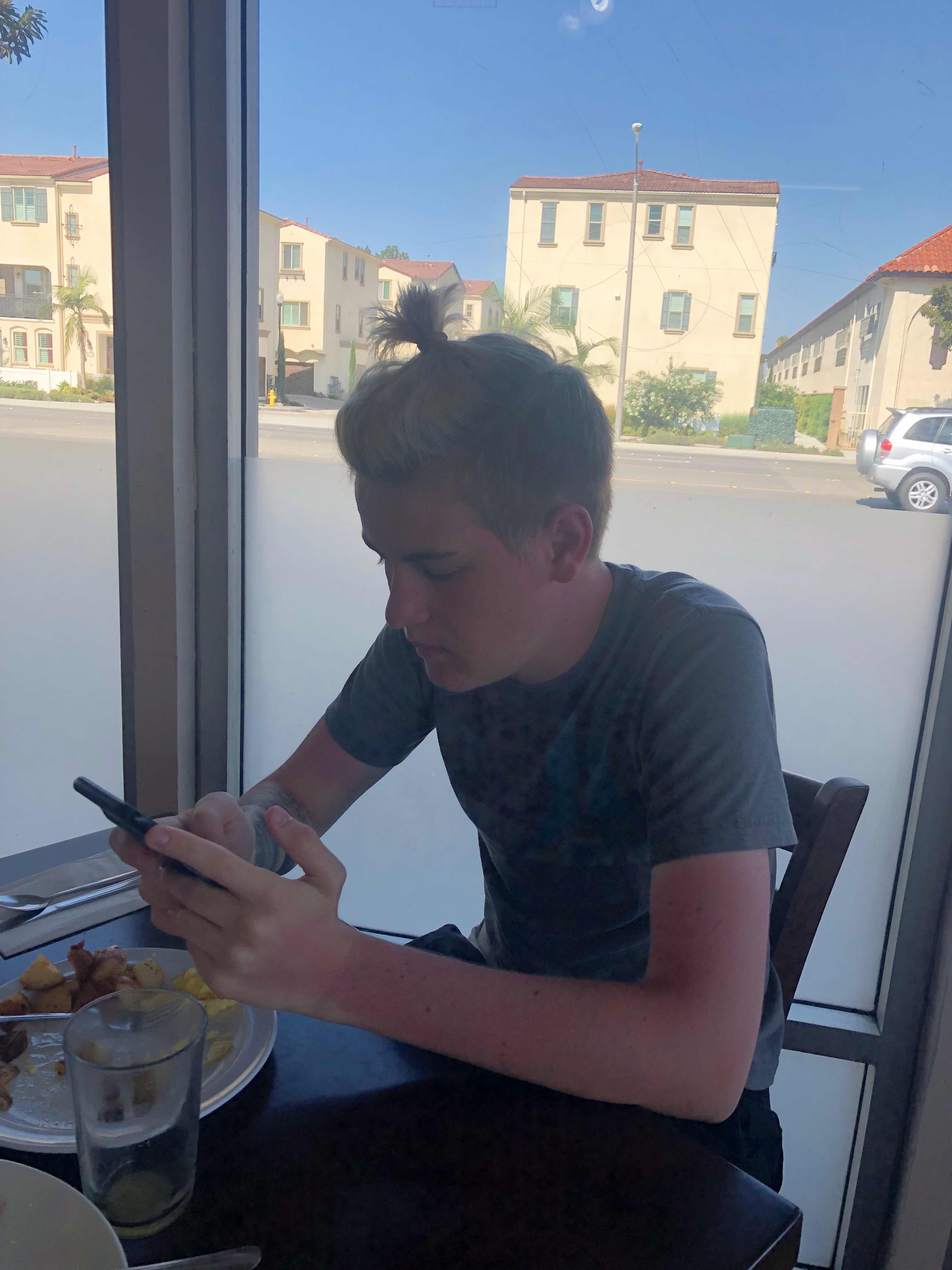 Sporting the man bun at breakfast. He liked it because it put so much volume in his hair when he took the rubber band out.
Breakfast was at Portos. If you are ever in Anaheim, check it out. 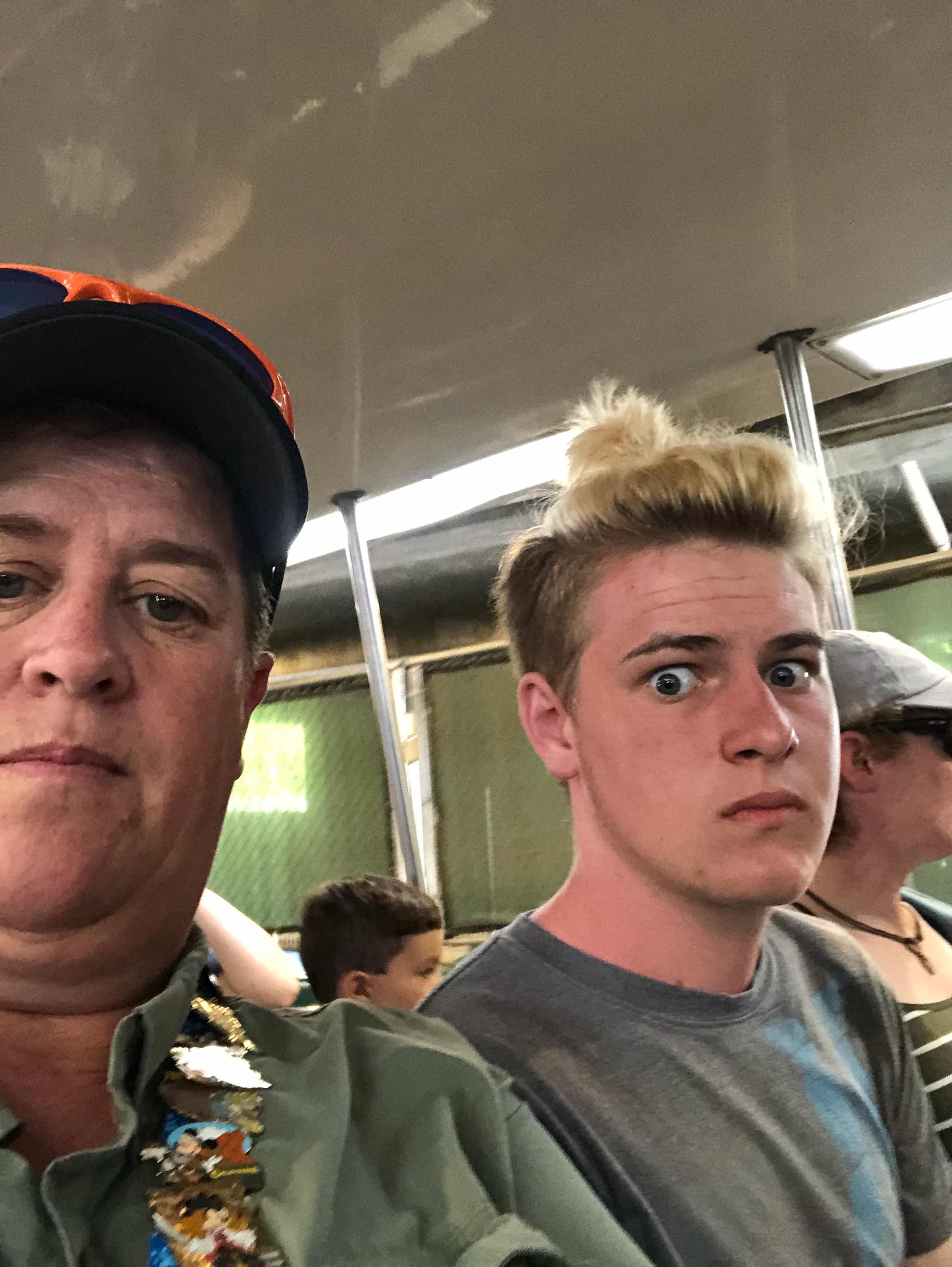 On the tram heading for the park.\
He was not expecting me to take the picture.
If you ever go to Disney, you must get the fast pass and use the Disney app. I was able to check in with the fast pass from wherever we were in the park without having to go to the ride, first. There is no other way to do the park. I checked Tristan and I into the Star Wars Tour as soon as we were in the park. The App gave us a ride time of 4:45 for the ride and it was 11 in the morning. It told me I had to wait an hour and a half to set my next fast pass, so in the meantime we wandered into Frontier land. We walked through Tarzan’s treehouse, then found ourselves at the Big Thunder Mountain Railroad. There was no line, so Tristan and I jumped on it. The line moved quickly and we got to ride the best roller coaster in the park, according to Tristan. 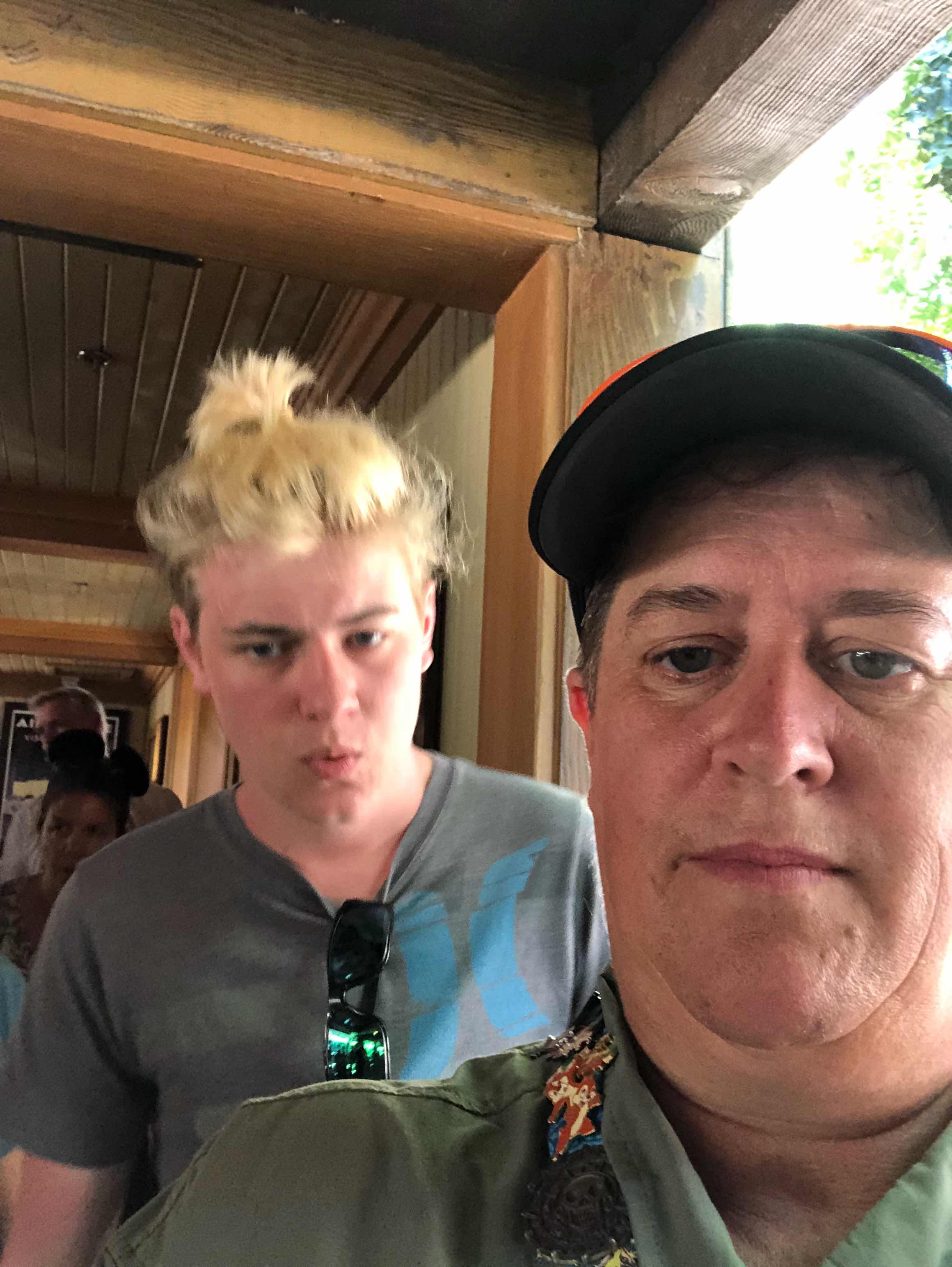 In the line for lunch, which was ok. 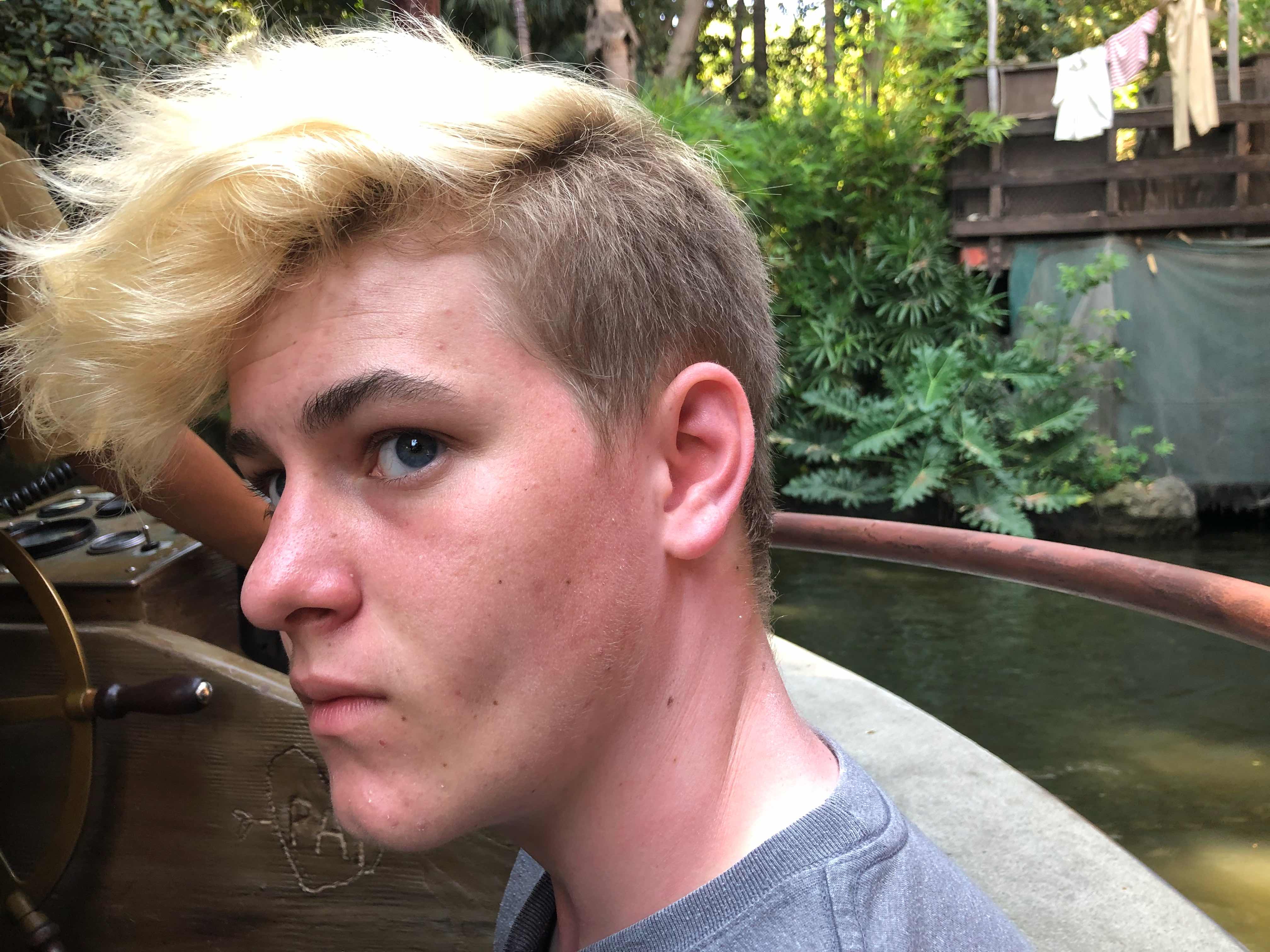 After lunch, we did the jungle cruise, which was entertaining, but mostly because the woman acting as the guide for the cruise was pretty punny. 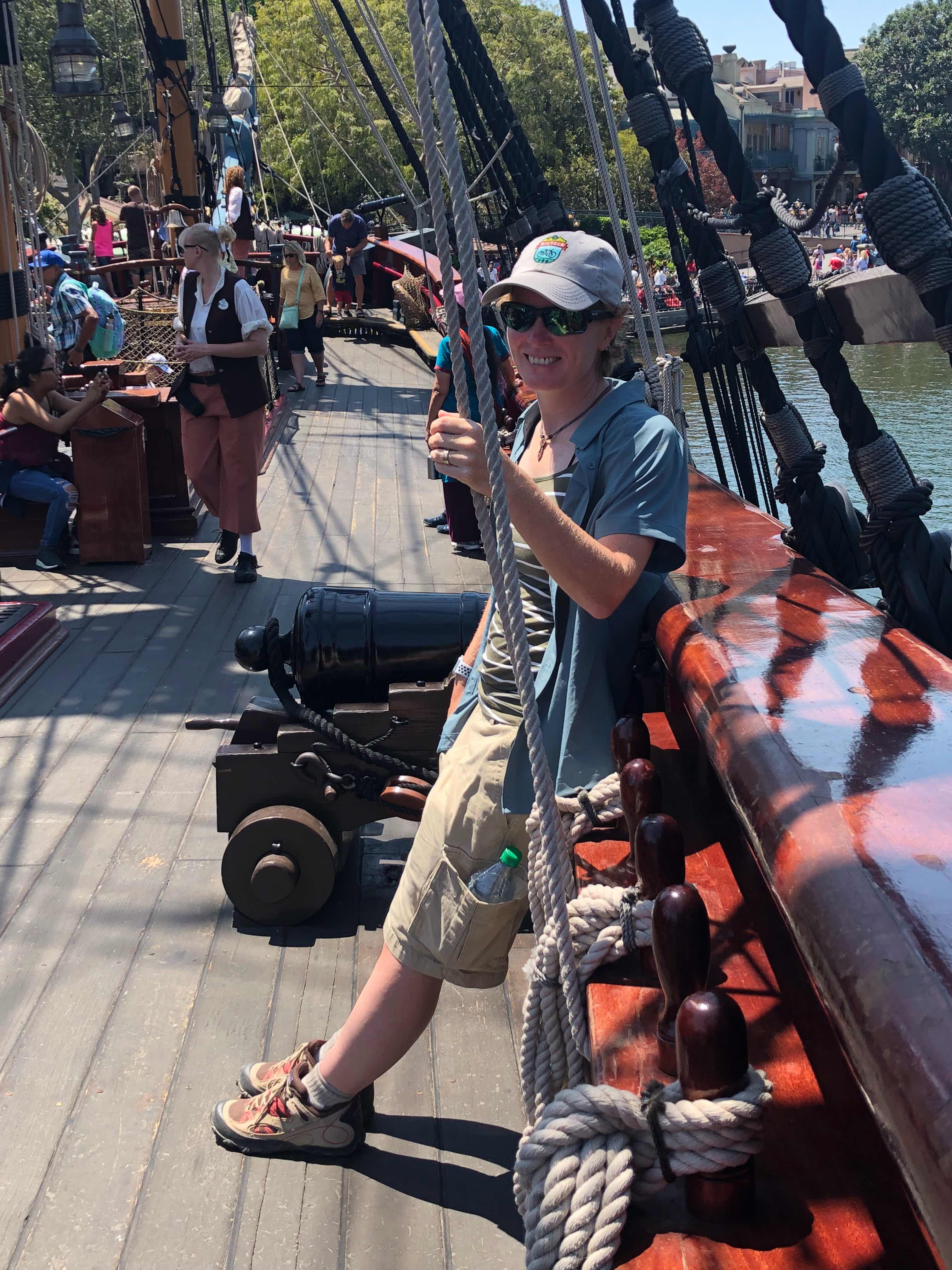 After the cruise, we did the Columbia, which is a British Man O’ War.
To Tristan, it looked like a pirate ship, so pirate ship it was, 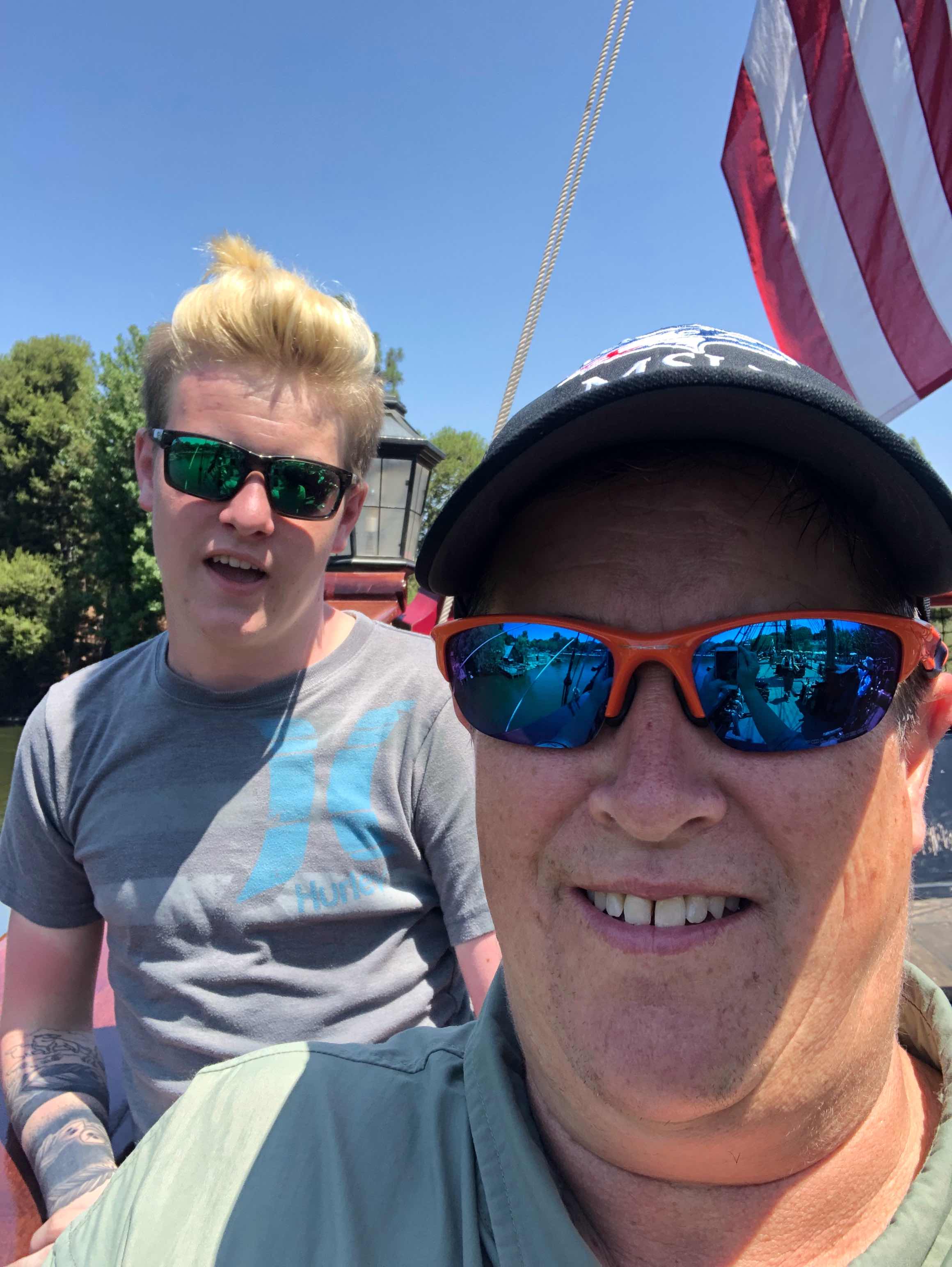 Watching him go from man bun to floof was pretty entertaining. 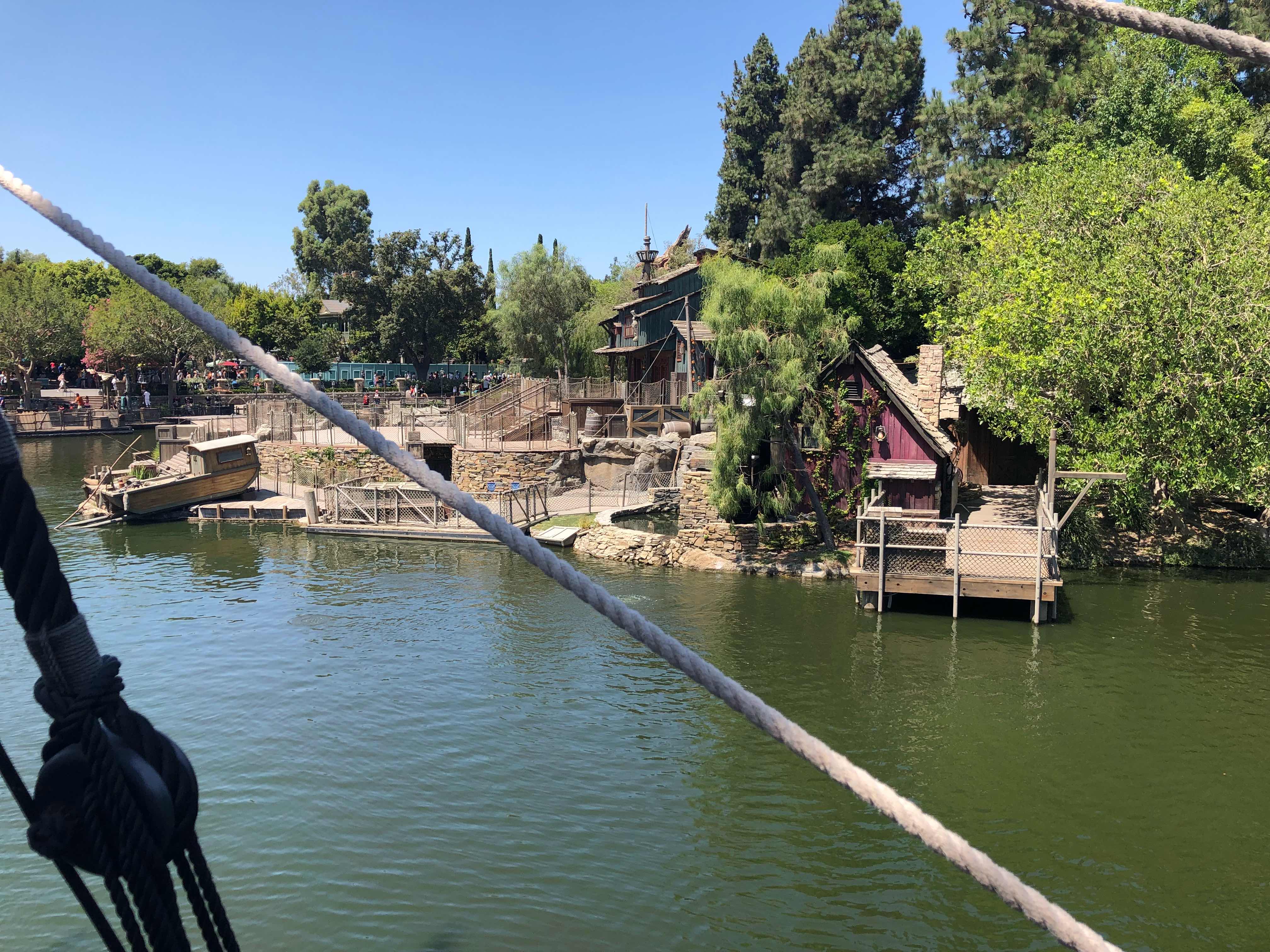 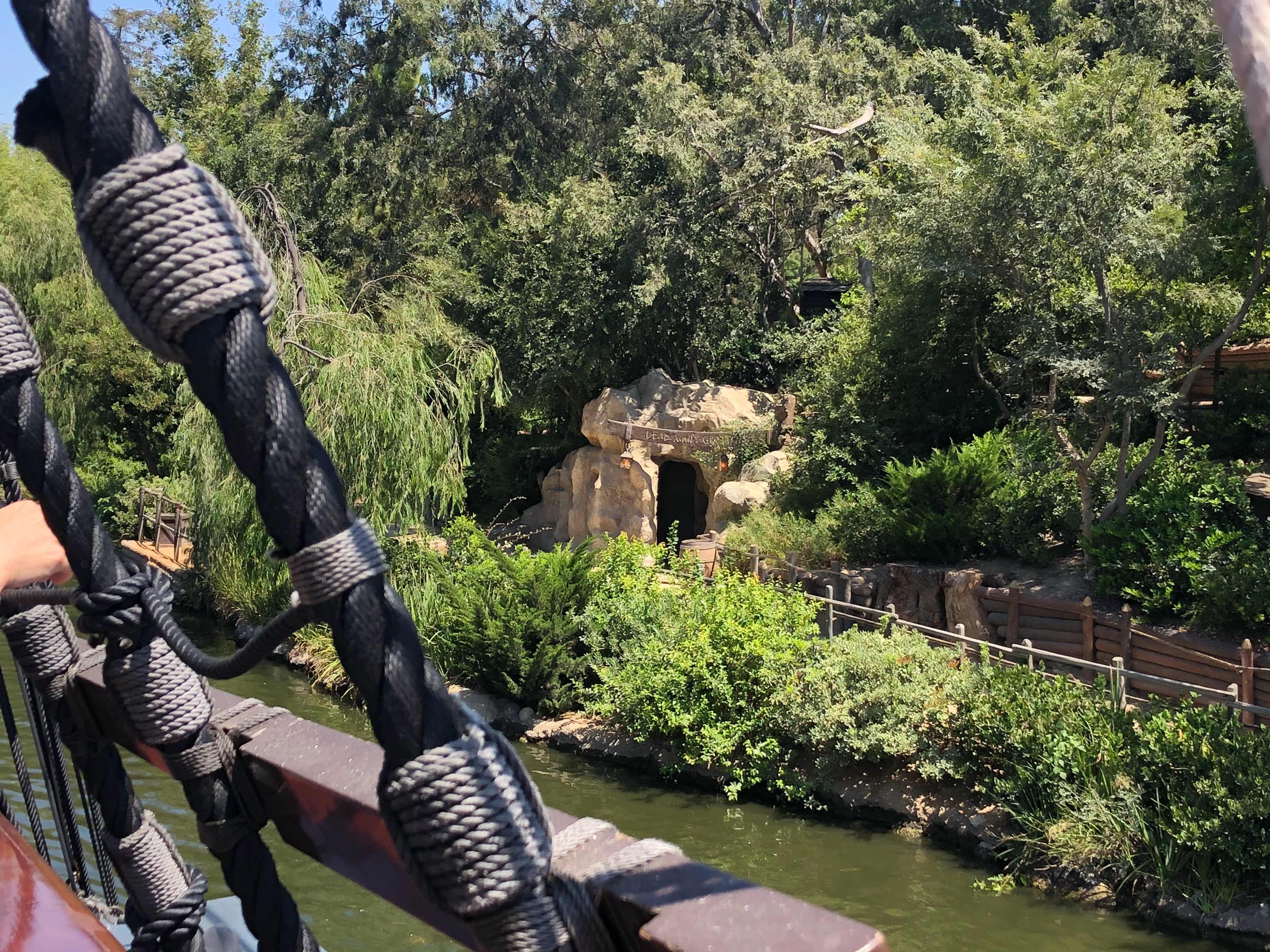 Floating around the island made me a little nostalgic to read the book Tom Sawyer again. 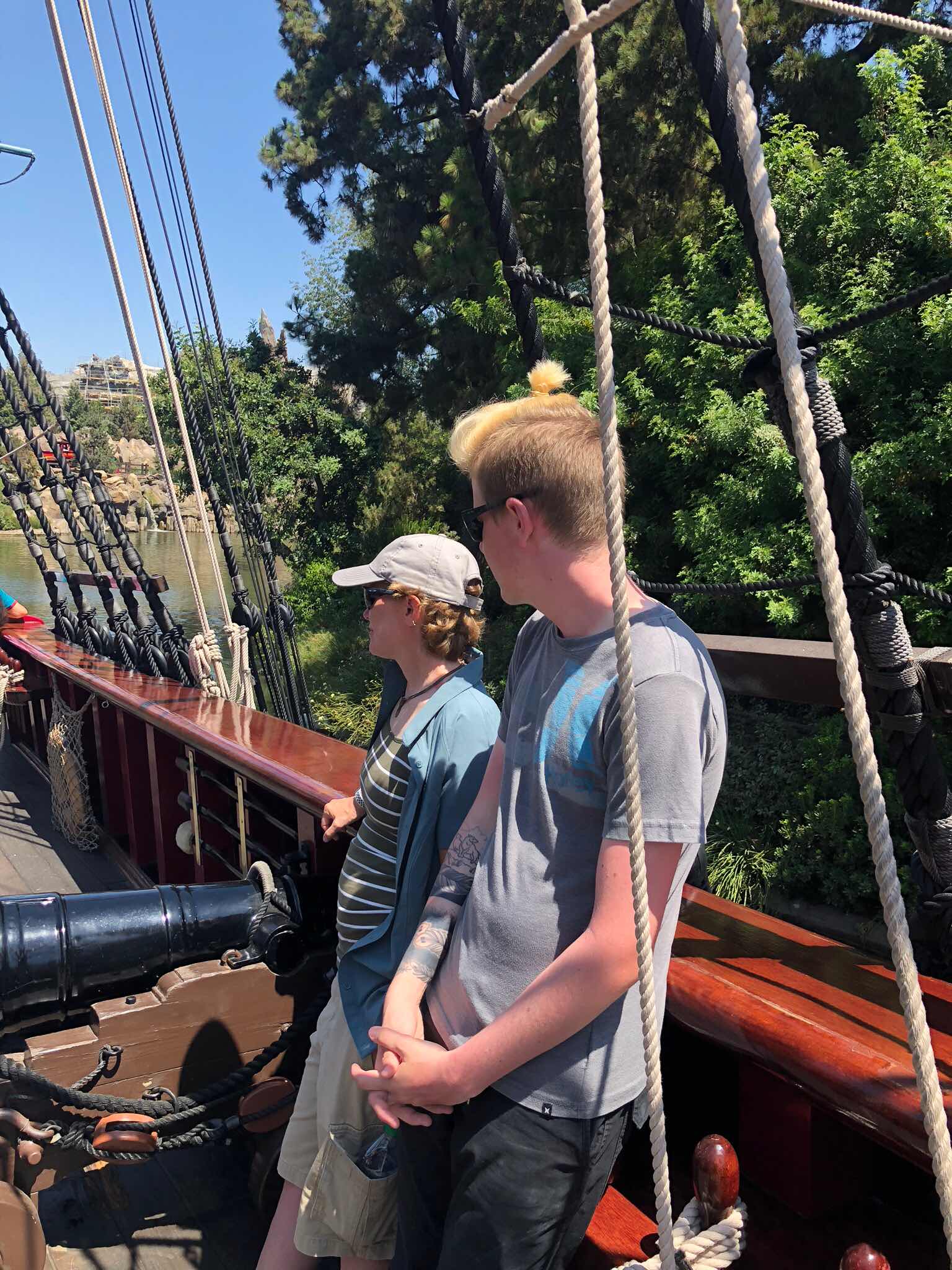 Watching the performers who were singing and dancing to bad drinking songs. 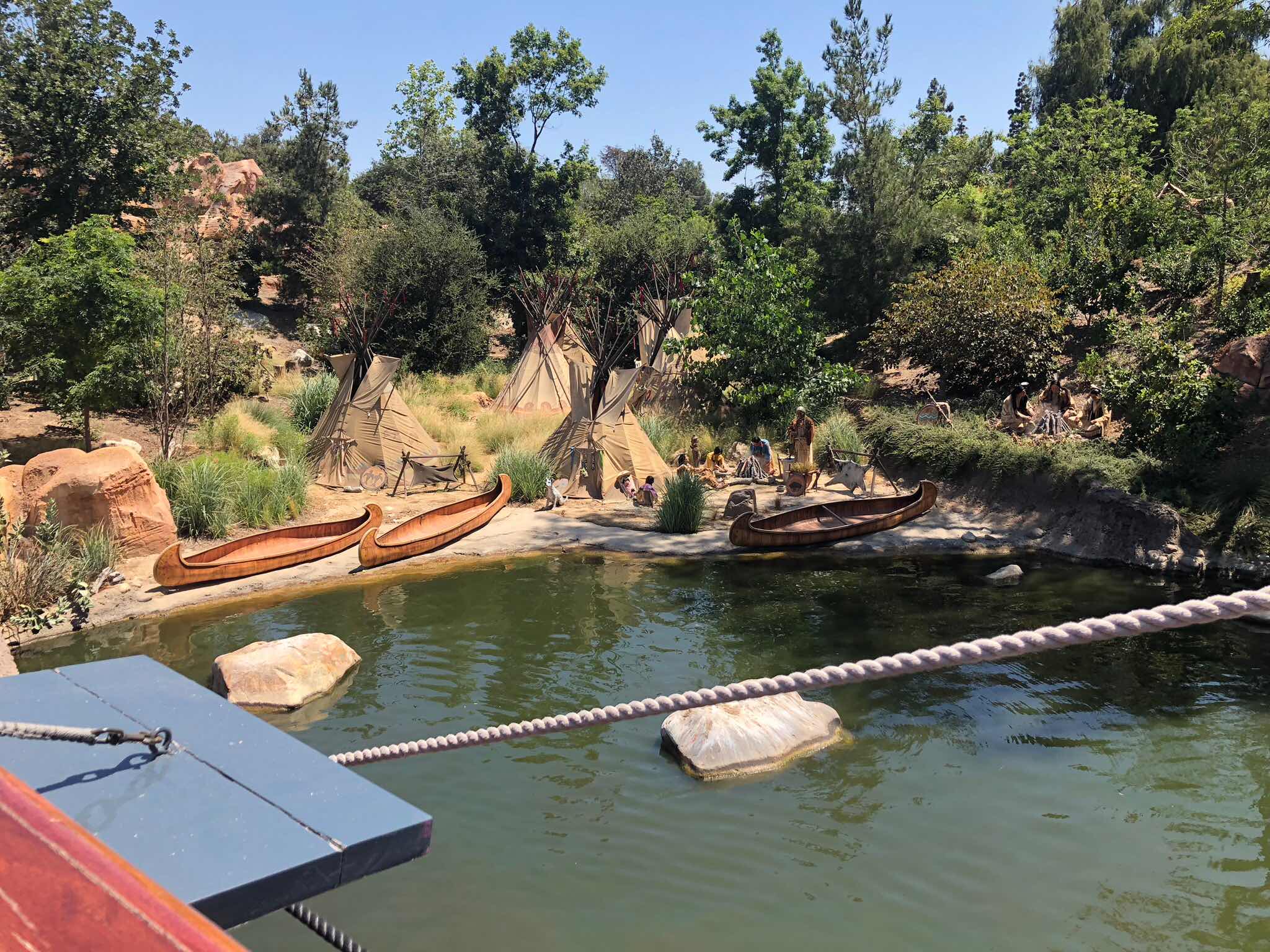 Can we talk about how no native tribe living on the banks of the Mississippi lived in tipis?
Tipis were Plains Indians homes and would not have been found with birch canoes.
Which should have been dugouts.
Can you tell this really bugged me? 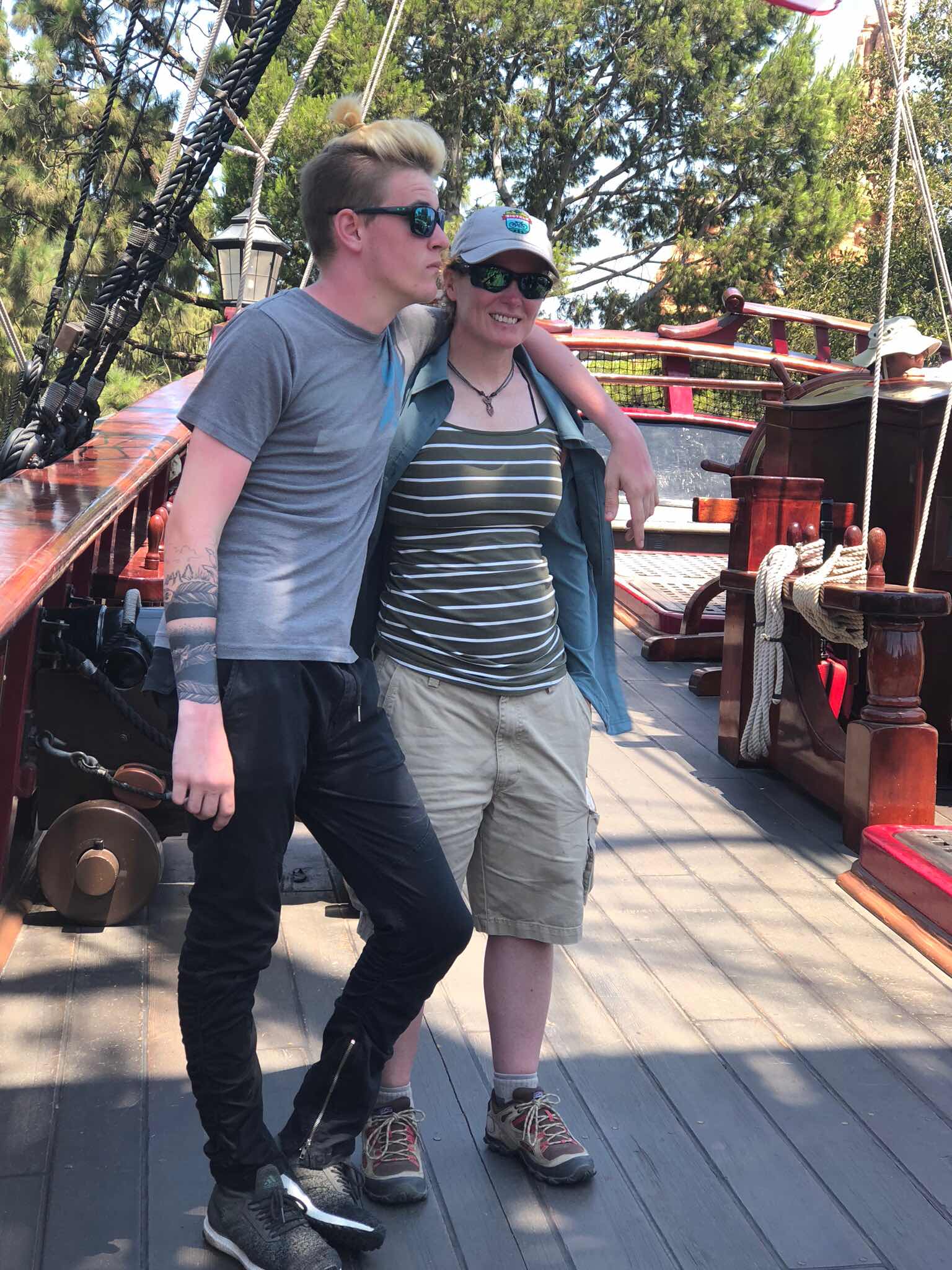 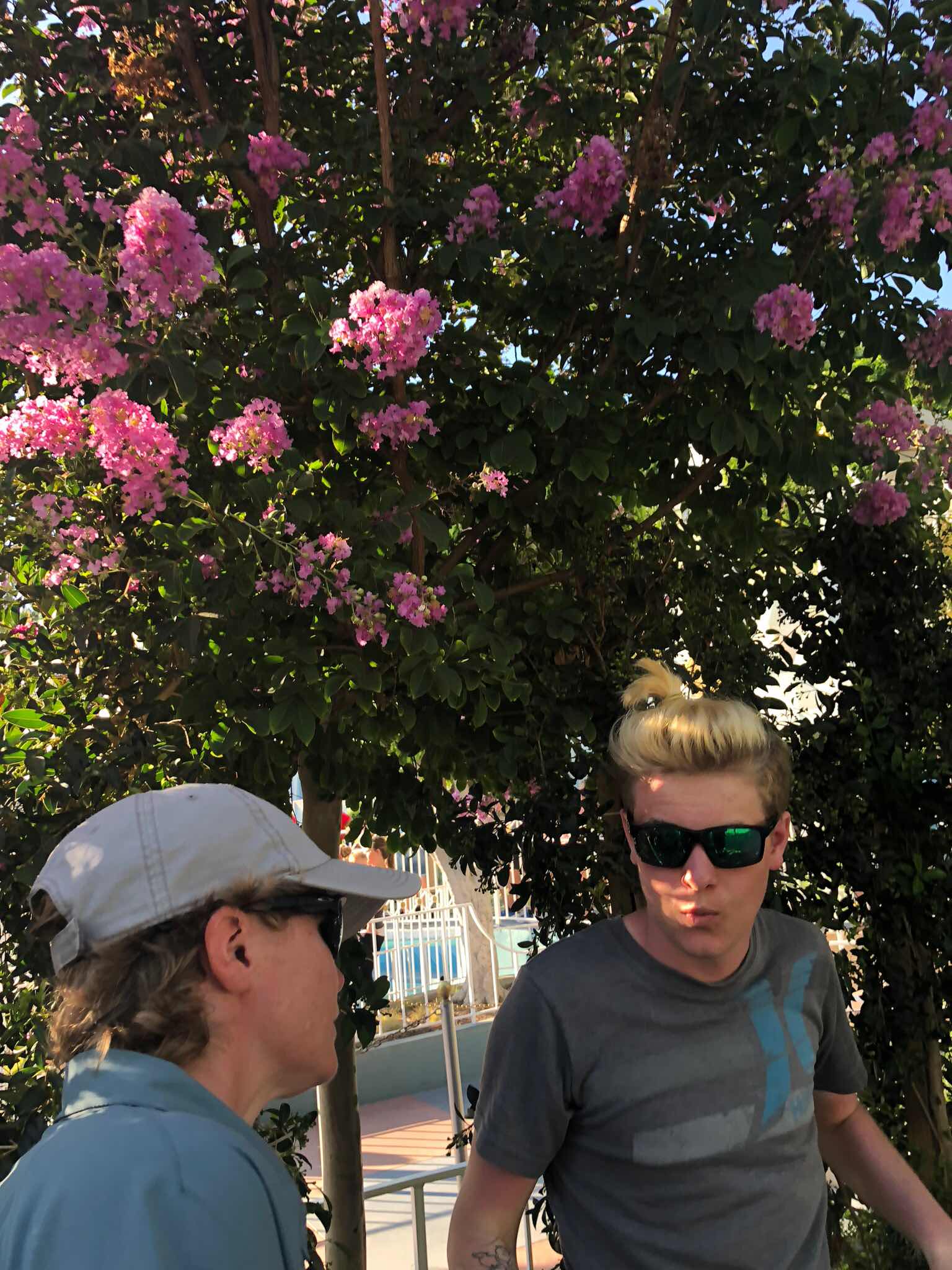 Waiting in line for the Pirates of the Caribbean ride.
This is still my favorite ride at Disney. It was a huge hit when I was very young and remains so today.
It was also one of the rides J could join us on.
We did the Indiana Jones ride after that, which was pretty fun, although kind of short for a Disney. It is a Jeep simulation, so kind of jerky, but since I saw the original Indiana Jones movie 80 times in the theater ($1 movie night for more than 8 months my senior year in HS) I am a bit of a fan.
After Pirates, Tristan and I went to ride Splash Mountain. Splash Mountain had over an hour wait time for most of the day, but I snagged him and we went on it when the line was unexpectedly short. We spent part of our time waiting in line talking about owning a frigate, and being pirates on the open seas. We also talked about girls and life and all the things. I really love spending time with my guy. And the ride was as good as I told him it would be.
We did Star Tours and then the Autotopia ride (Tristan and J - I really had to pee) ride, before making our way to the Small World ride. That ride has a lot of nostalgia for me, since I collected all 50 of the It’s a Small World dolls when I was a kid. It also gave Tristan the opportunity to break out in song whenever he felt like it for the rest of the trip. I had been working the Fast Pass app all day and that gave us the opportunity to go back and ride the Big Thunder Railroad a second time without waiting in line. Then we raced back across the park to catch our ride on Space Mountain. 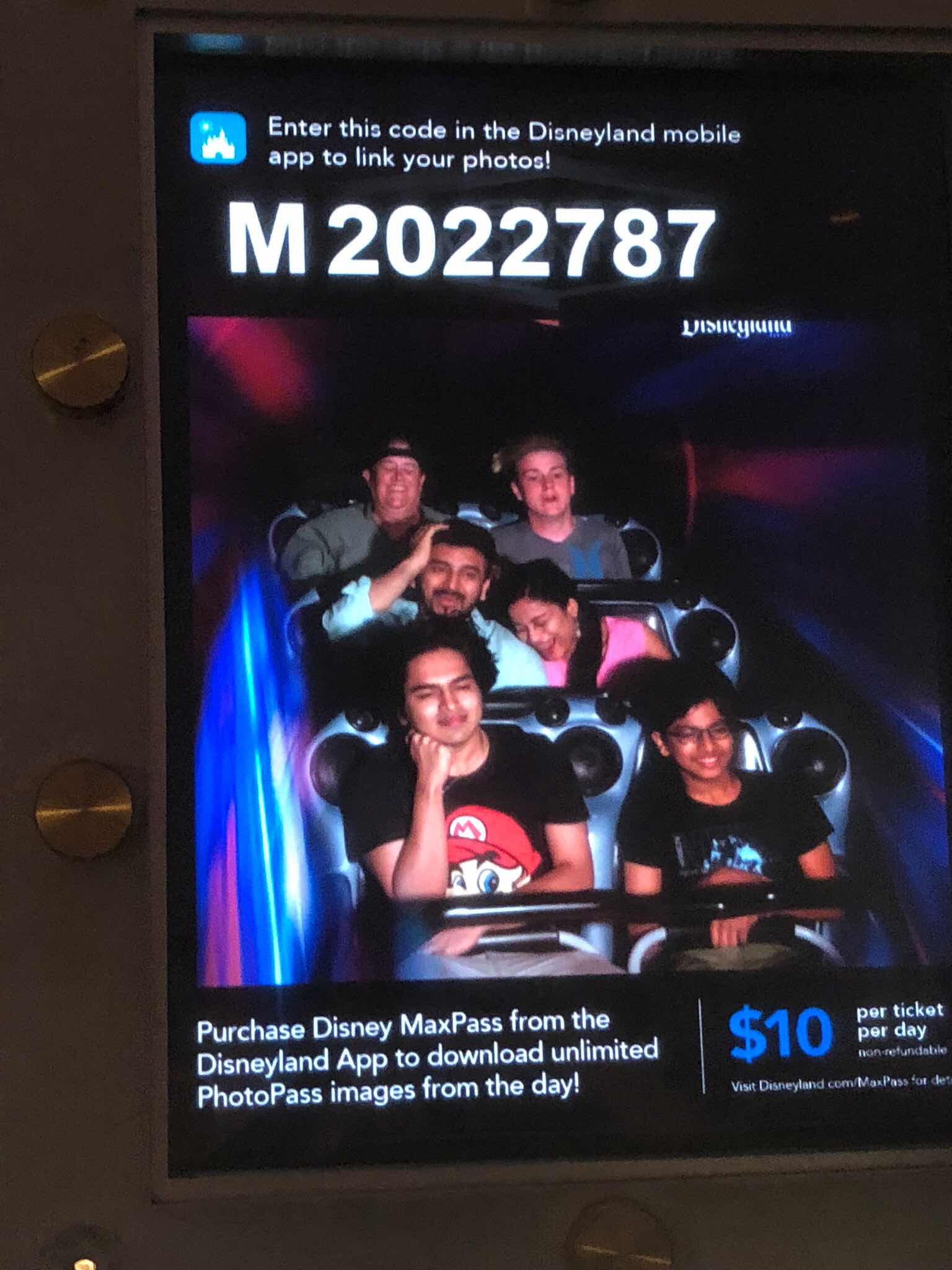 Ride picture from Space Mountain.
It was supposed to come across on my app, but never made it. 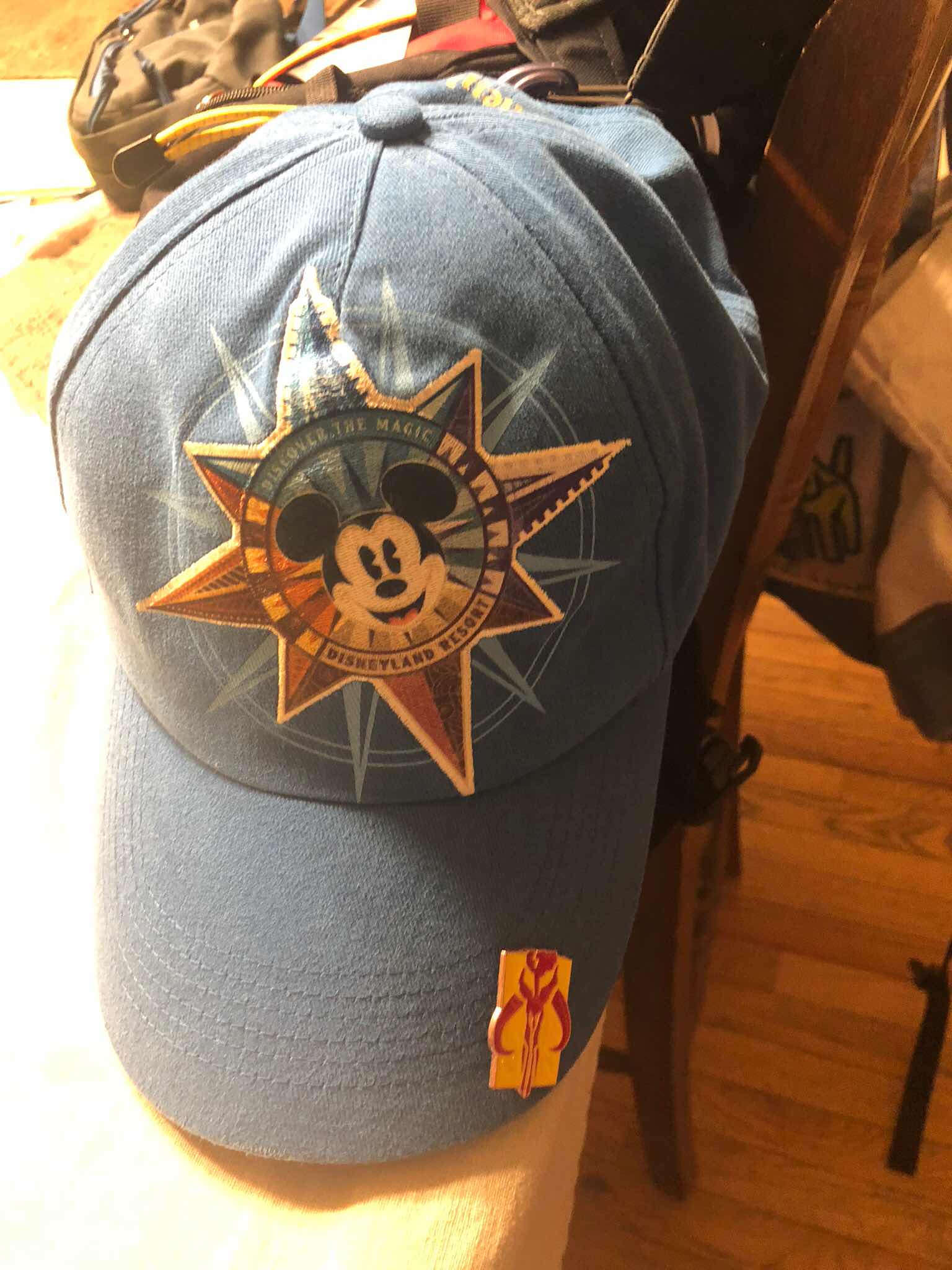 My souvenir and a Mandalorian pin I traded for at the park.
(Pin trading was a bust this year. I wasn’t excited about anything I found but the above pin.)
We left the park about 8 to get food and go back to the hotel. J was done and both Tristan and I had ridden all of the rides we could fit into one day. He said to me as we left that he had a great time, it was a lot more fun than he was expecting and that he would go back.