One of the great things about my trainer is she goes to fancy dressage clinics and comes home with new exercises for Ashke and I to struggle through try. She spent the past two days riding with George Williams (USDF) working on getting her I2 horse to be more relaxed and correct in his piaffe and passage work. One of the exercises she was doing, was one we attempted last night.

Let me preface my recap by saying, I probably should have cancelled my lesson last night because yesterday was spent dealing with vertigo and nausea. By 5 pm I was able to walk upright without falling into the wall and was no longer wanting to throw up, so I went. I was a little weak and tired for the lesson, however, Ashke was a doll and tried to make up for my lack.

We started with shoulder in and haunches in, then Amanda had us work on the exercise she had been working on in her clinic. We started in the walk. Half-pass to the left for five steps, then changing the bend while still moving forward until we were in a leg yield. Once the leg yield was established, we moved to a half-pass to the right, then changed the bend into a leg yield while still moving in that direction. Once we both had the idea, we tried it in the trot as well. It takes a lot of leg and seat to do correctly, which is always a great challenge for us, since it makes me be very quiet with my hands. The intent of the exercise is to get him to move laterally, changing bend and direction without tension in his neck and poll. It was a great exercise to get him supple through the base of the neck (no tension wrinkles) and to relax at the poll. His go to is to throw his head up and muscle through whatever we are trying, and this will help develop those muscles needed to move his shoulders and withers without getting hollow or giraffe like. Amanda and Laz were able to do it in two step increments in passage, but we are not there yet. It is a great exercise to add to my practice rides. And Ashke liked the challenge.

We did a walk break where I was really encouraging him to reach down in a stretchy walk. I'm beginning to wonder if the SI is being thrown out by tension in the base of his neck and shoulder. He spent so much time with the SI out that keeping it in long enough for his body to recognize the new normal is going to take a lot of attention. And the right hock pain may be contributing to that as well. We shall see what the next six months brings.

After our stretchy walk, we did some canter work on a circle, first with the spiral in and out, and then working on shoulder in to neutral on a fifteen meter circle. The second exercise will not be added to our practice because I could not honestly tell when I was doing it correctly unless Amanda told me so. We will continue to work on it in the lesson, until my "feel" has improved.

We finished up with double slalom practice sans poles, just working the pattern in my mind. And then the single slalom. Ashke really gets collected in the single slalom, since we only have about three strides between transitions. At that point, we were both done. 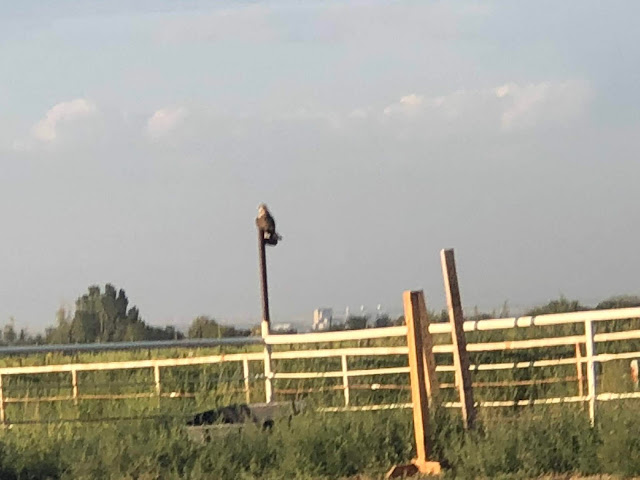 We had a visitor that was watching our warm up from the corner of the arena. 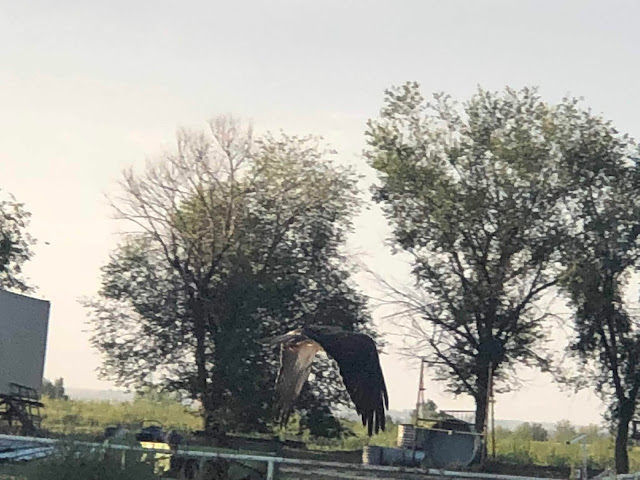 She wasn't bothered by the horses, but took exception to my approaching her for some media. 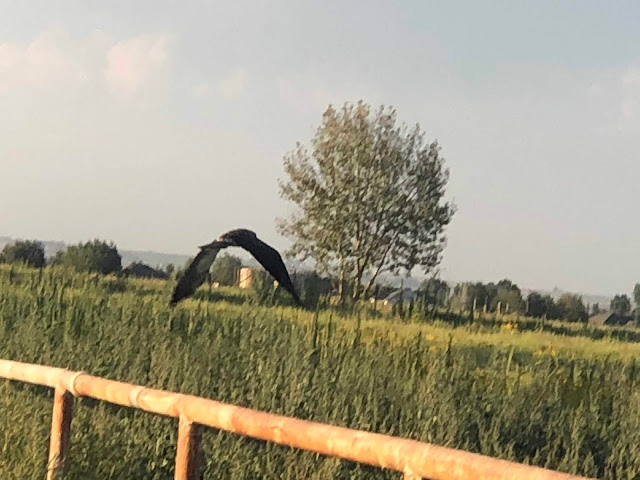 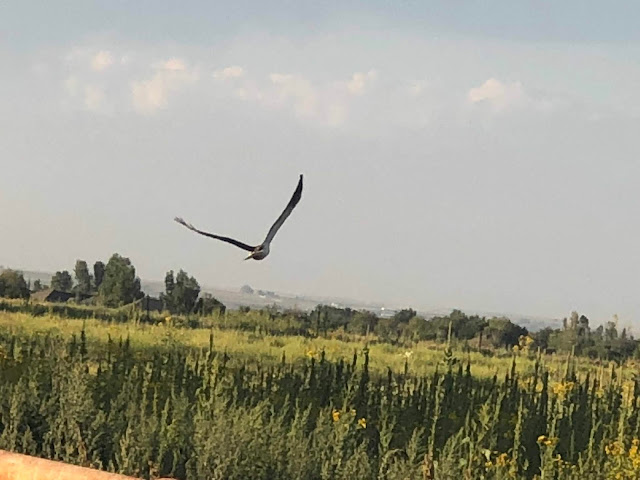 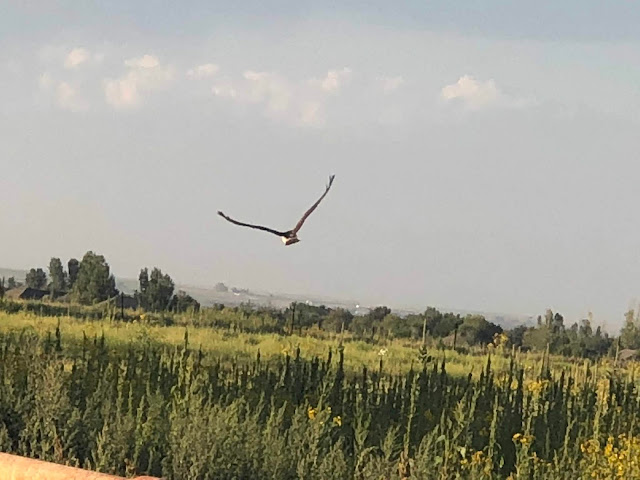 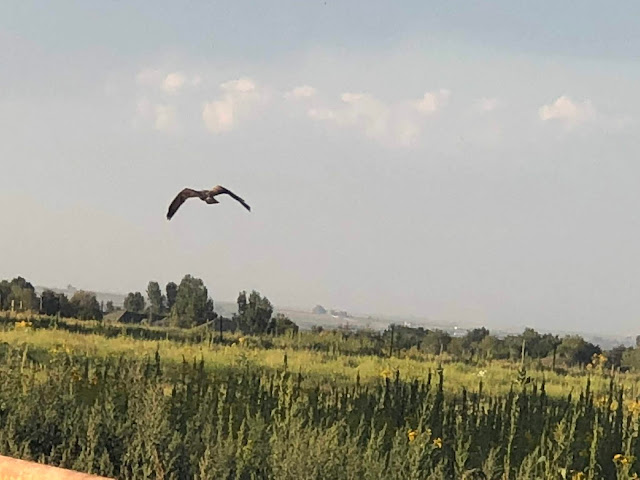 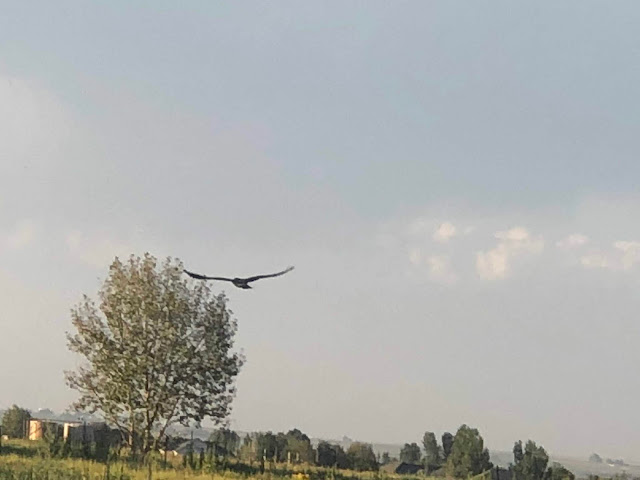 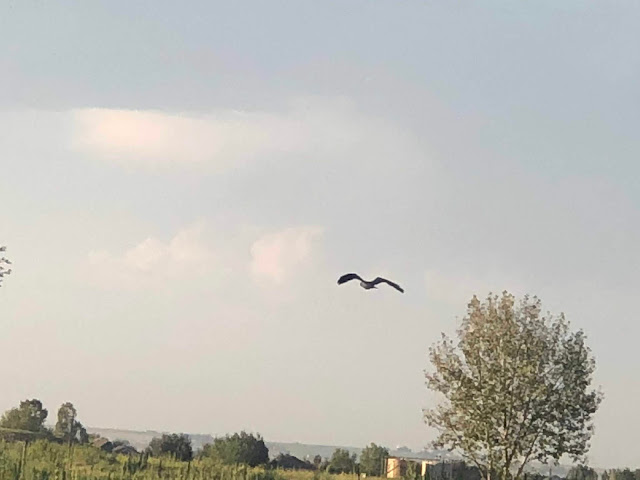 Pretty sure she was a Redtail, but couldn't confirm identification.
Never got a good look at her underside.