We spent one night in Grand Junction, then visited Bryce on our way to St George, Utah. We ate breakfast on Saturday morning at the Black Bear Diner. They had the best fresh squeezed OJ either myself or Tristan has ever tasted. 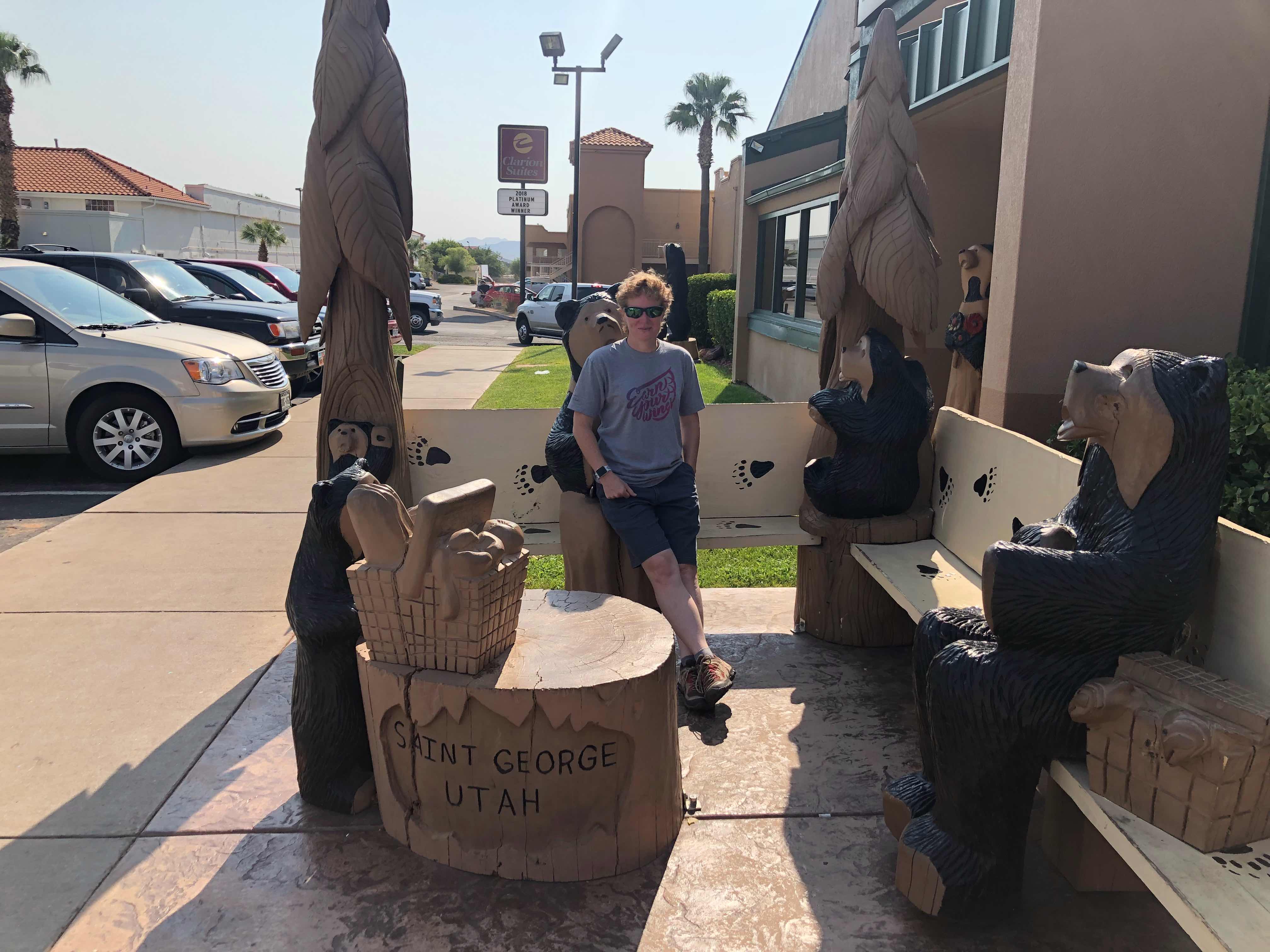 Welcome to Black Bear Diner
Food was pretty good but one plate was enough to feed a family of four.
Or one teenaged boy. 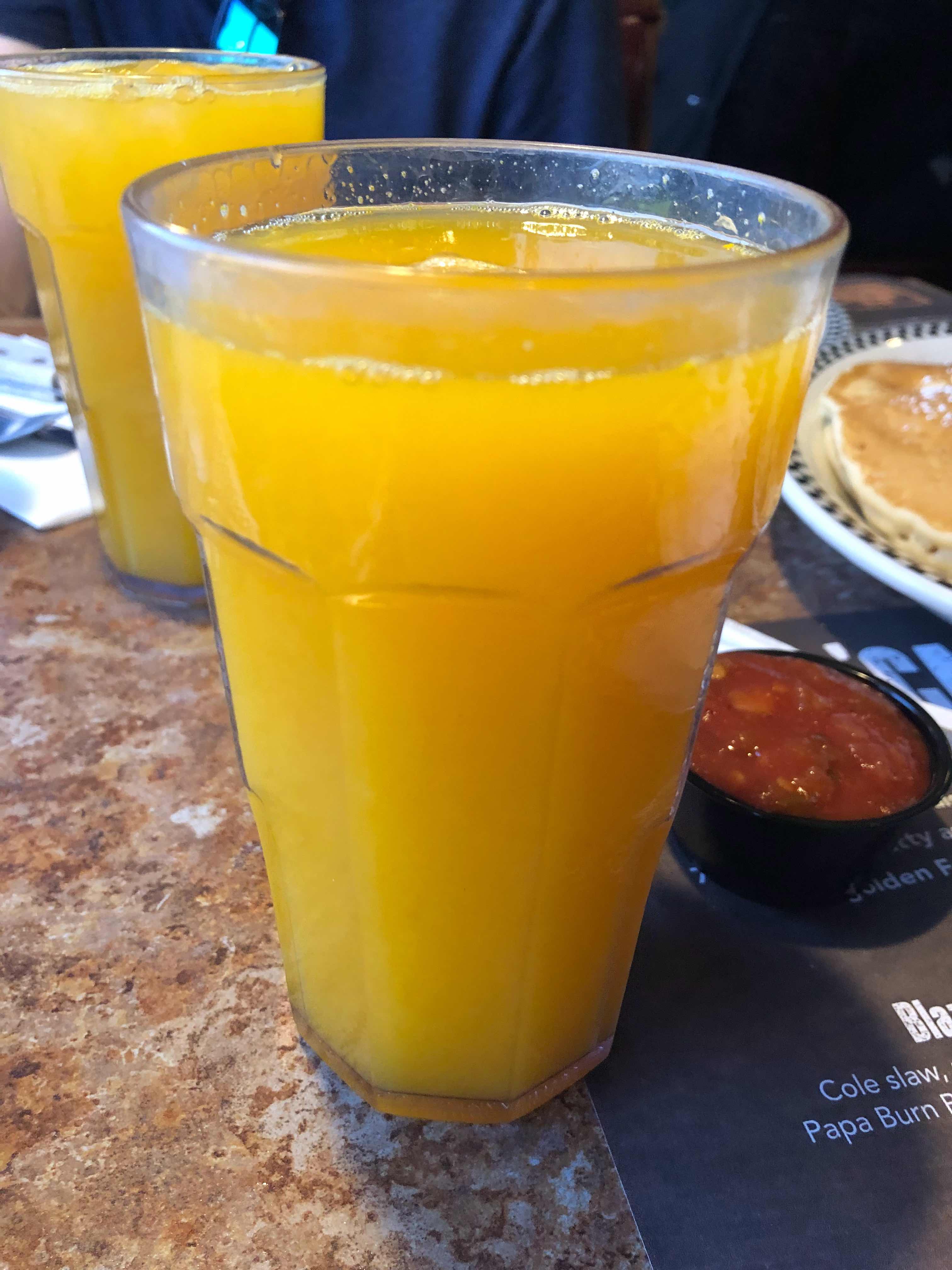 Tristan said it was like drinking out of heaven’s ass.
He makes me laugh so hard sometimes.
The drive was pretty uneventful. We pulled into Anaheim at about 3 pm, which was check in time. The motel I had found was called the Anaheim National Inn and was pretty damn disappointing. The WiFi didn’t work, the beds were uncomfortable, the bathroom fan ran every time you turned on the light and the floor was so disgusting that the bottoms of your feet were black after five minutes of walking barefoot. We had booked and paid for five nights but opted to move to a new hotel after four nights. Couldn’t handle the floor any more. Would not recommend. 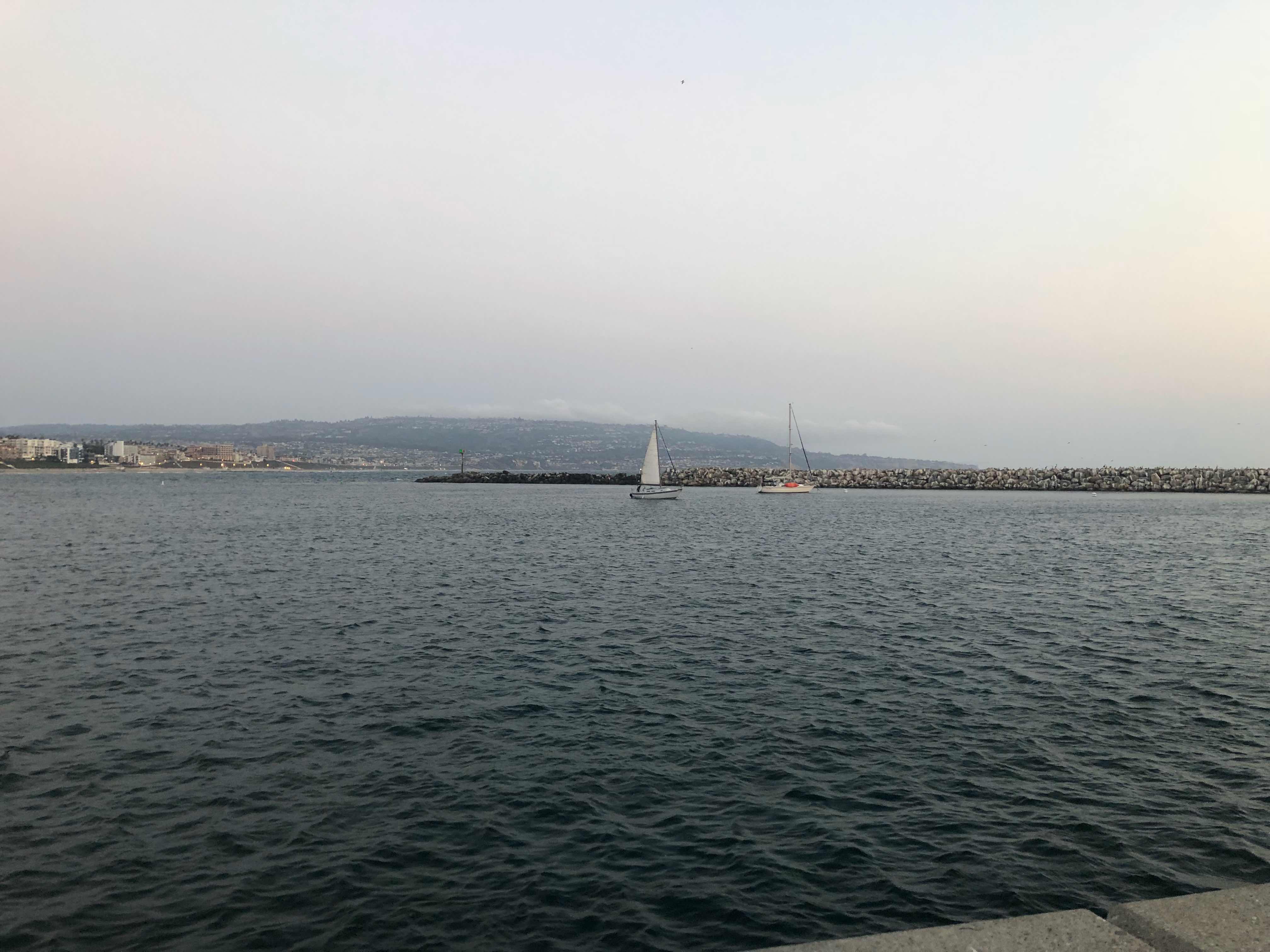 Redondo Beach Pier
We ended up at a Joe’s Crab Shack on Redondo Beach for dinner on Saturday night.
Would have loved to have been there earlier when the baby bottle nose dolphin was playing next to the walk way.
Sunday was spent at Santa Monica beach, where I spent a lot of time when I was a kid. My grandmother enjoyed taking us there and I knew it would be a safe beach from both a water and an environment point of view. I was giggling like a little girl when we topped the sand and the water lay open before me. I haven’t been on that beach since 1997, and the time before that was the last summer I was in Los Angeles. That time, I had swam out into the water beyond the breakers and floated on the ocean, hearing Her song in my ears, as I dozed for a couple of hours. I was awakened by a wave breaking over my face, and had fought my way back to shore through exhaustion so deep I could barely move. In 1997, I had only spent a couple of hours in the surf before the sun had broiled J and we had left.
This time, I spent most of the day playing in the surf with a boogie board and my son. He took to the ocean like he had been there forever. 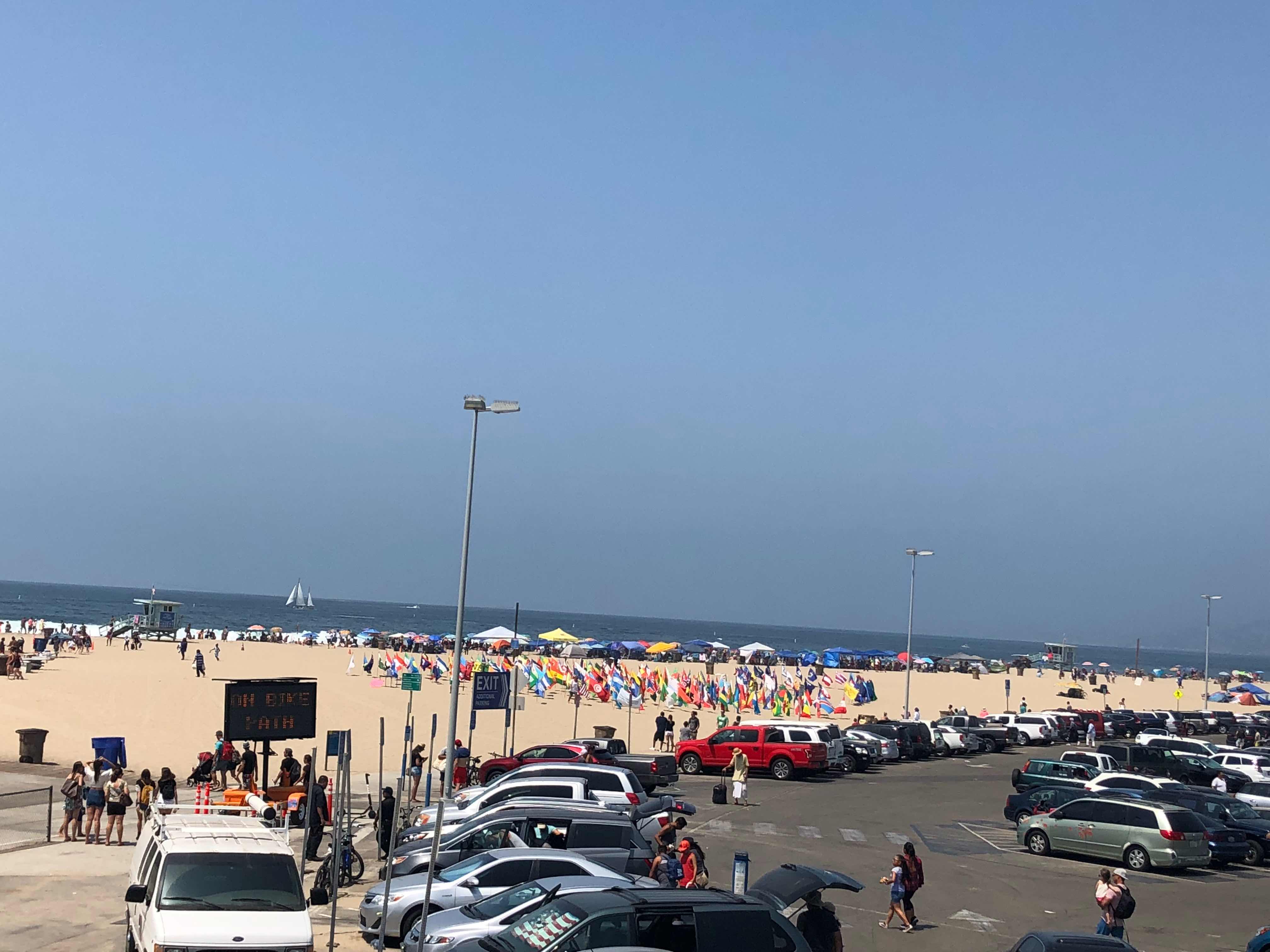 The Ocean from the Santa Monica pier. 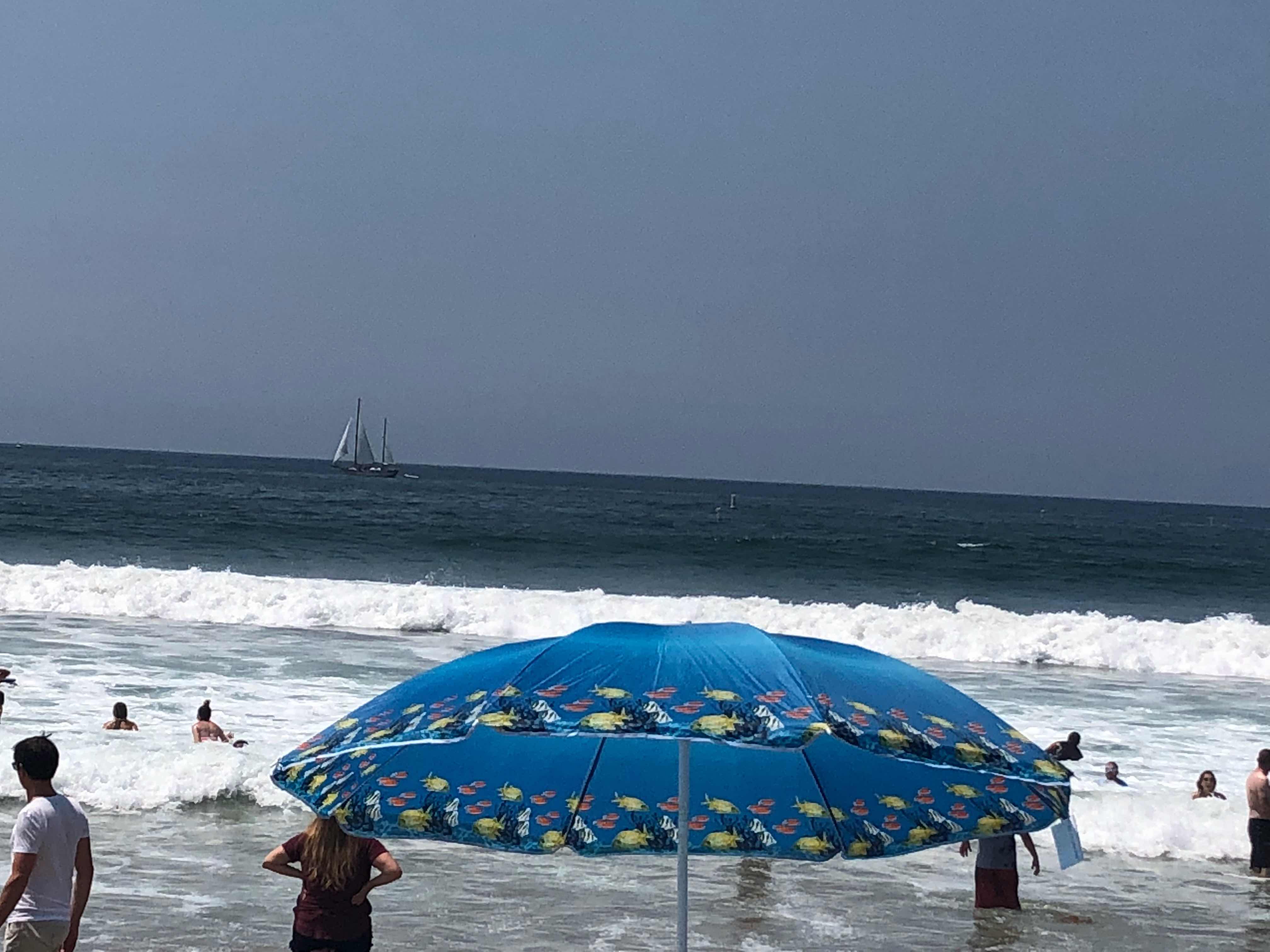 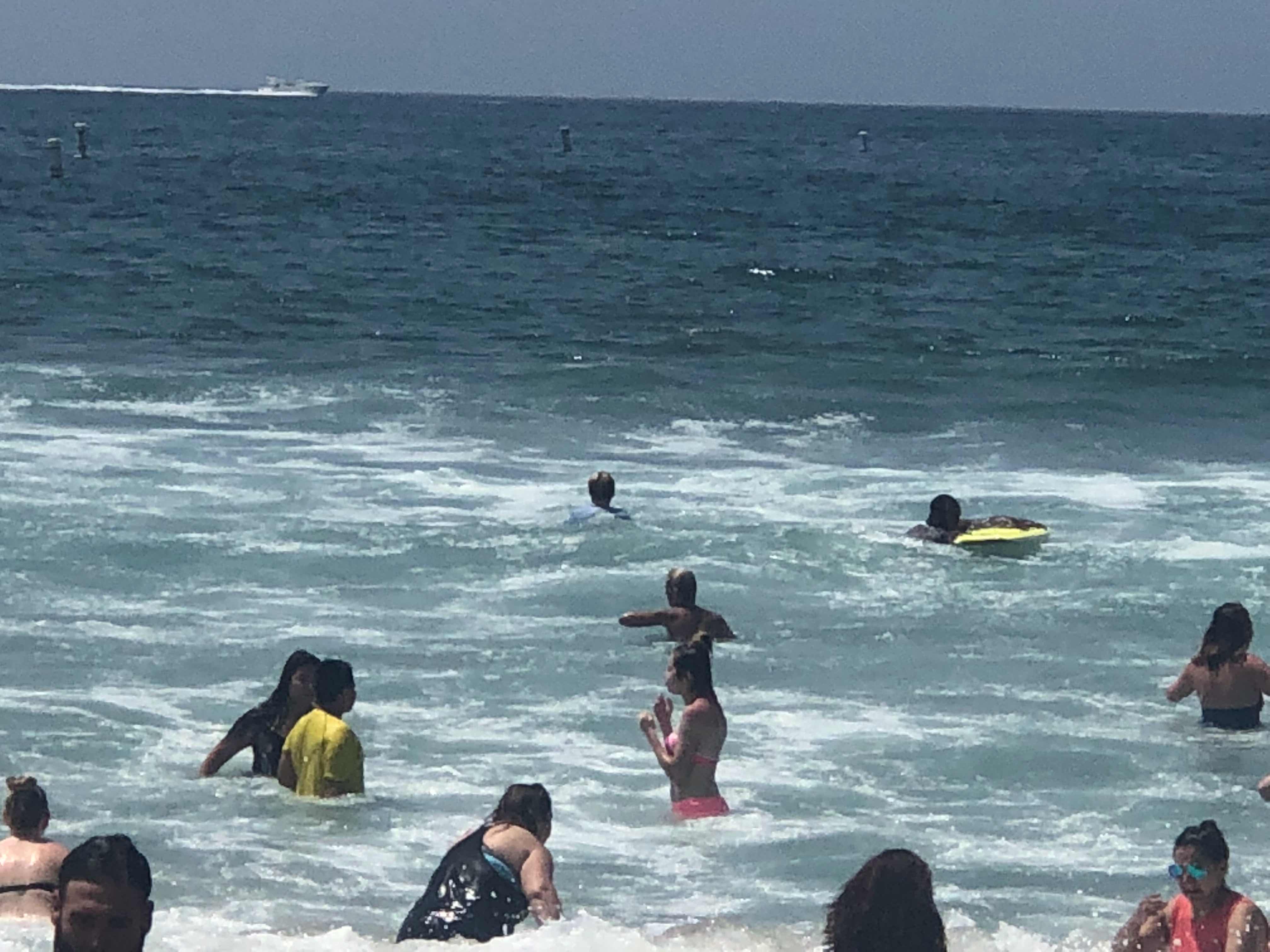 That head in the middle of the pic is Tristan. He spent hours in the waves. 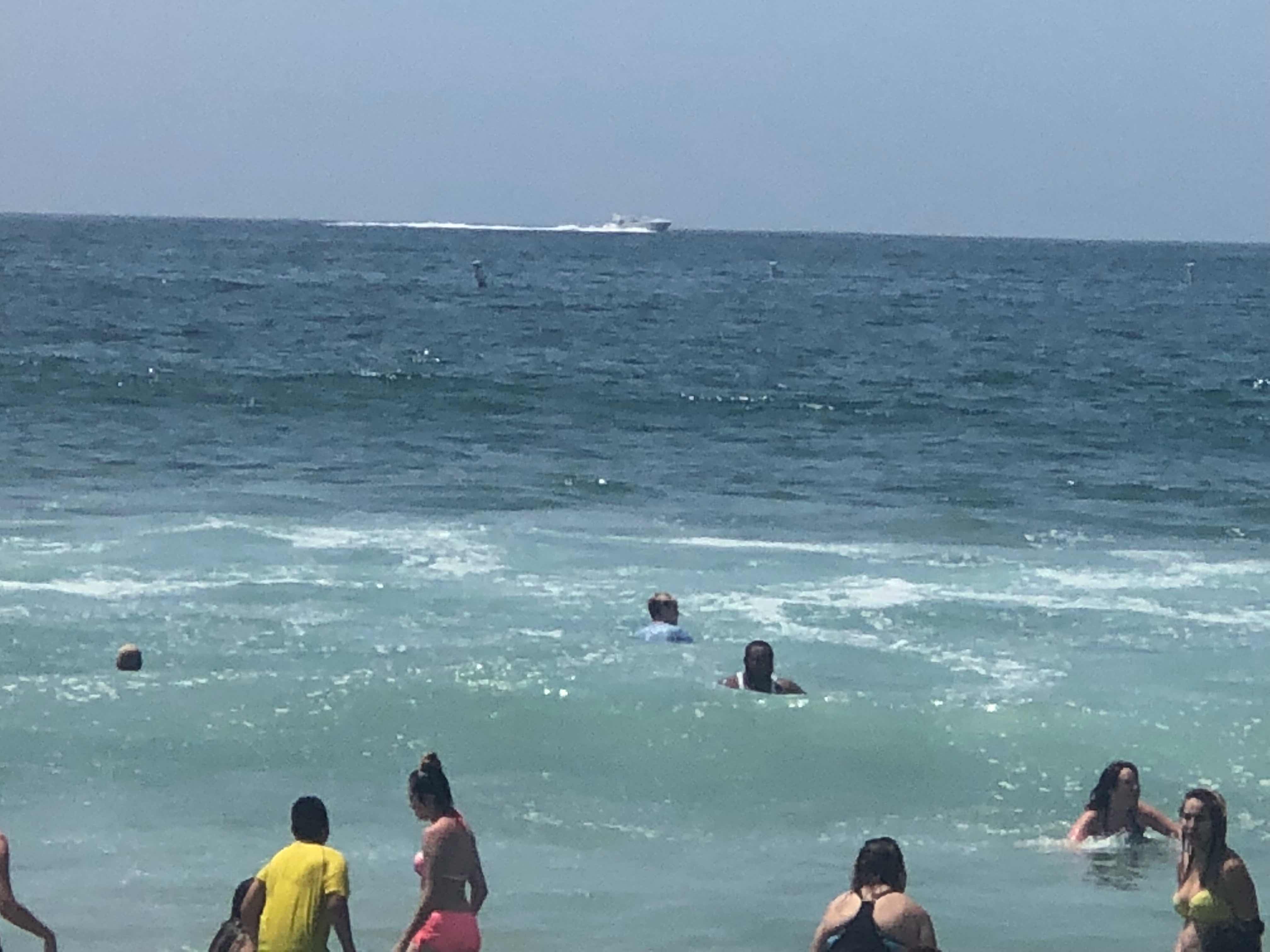 Nature environment. And oh boy, did he burn. 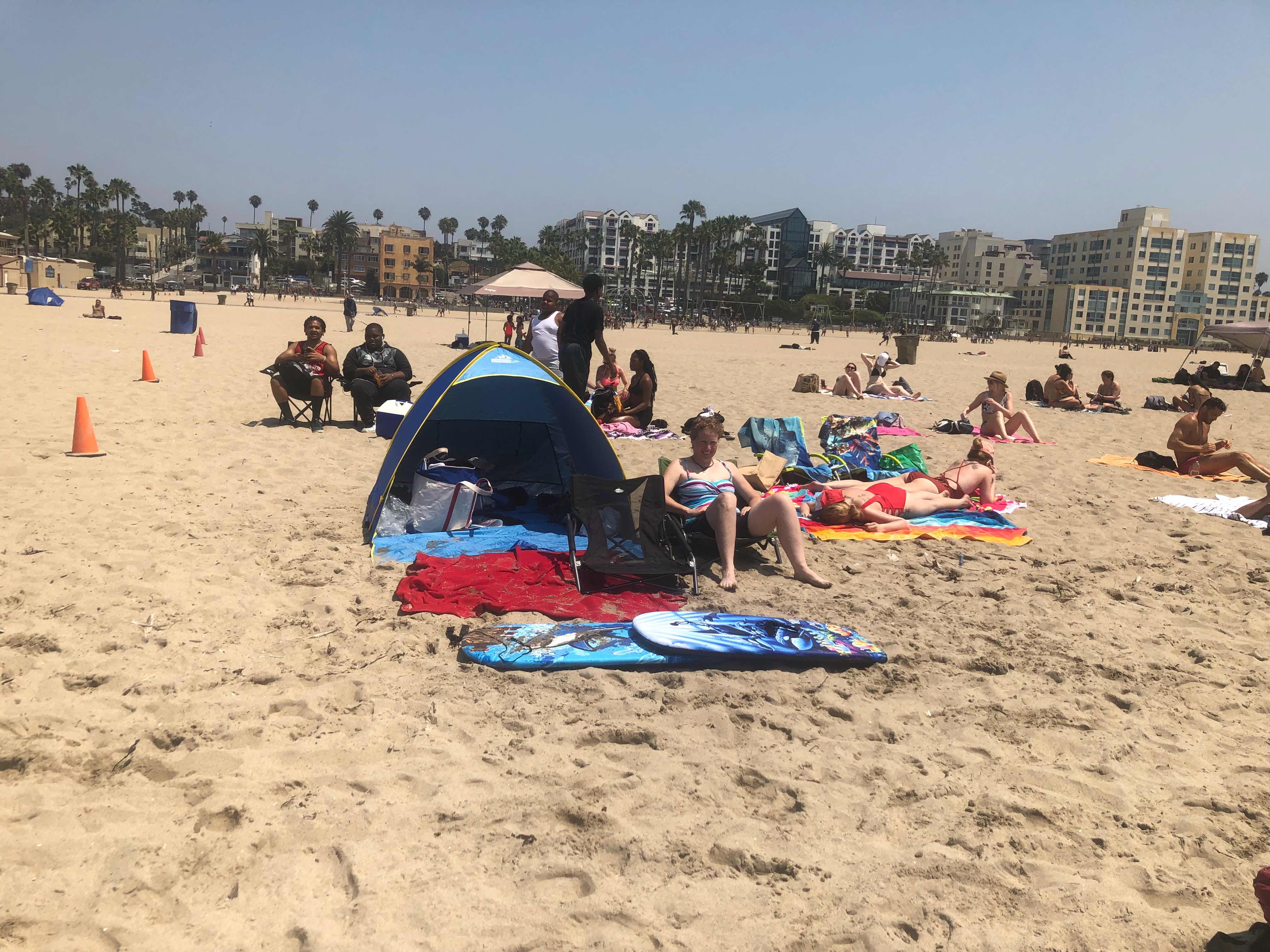 J spent most of her day at the little cabana.
Tristan and J were both too tired to walk back down the pier for dinner so we went to the Cheesecake Factory for lots of food. I did appetizers, Tristan had a salad and J had a pasta dish. We went back to the hotel and crashed early.
The second day was spent at Venice Beach, where the waves were big enough that the surfers were working the waves next to the breakwater. I actually managed to catch three waves correctly to boogie surf, riding them from way out to the shore. It left me grinning with delight and wanted to tell Saiph I had caught a couple correctly. Tristan only drank about a gallon of water. I watched him come up out of the water, wipe his face with his mouth open and then turn oceanward to catch a wave full in the face. I had to laugh. 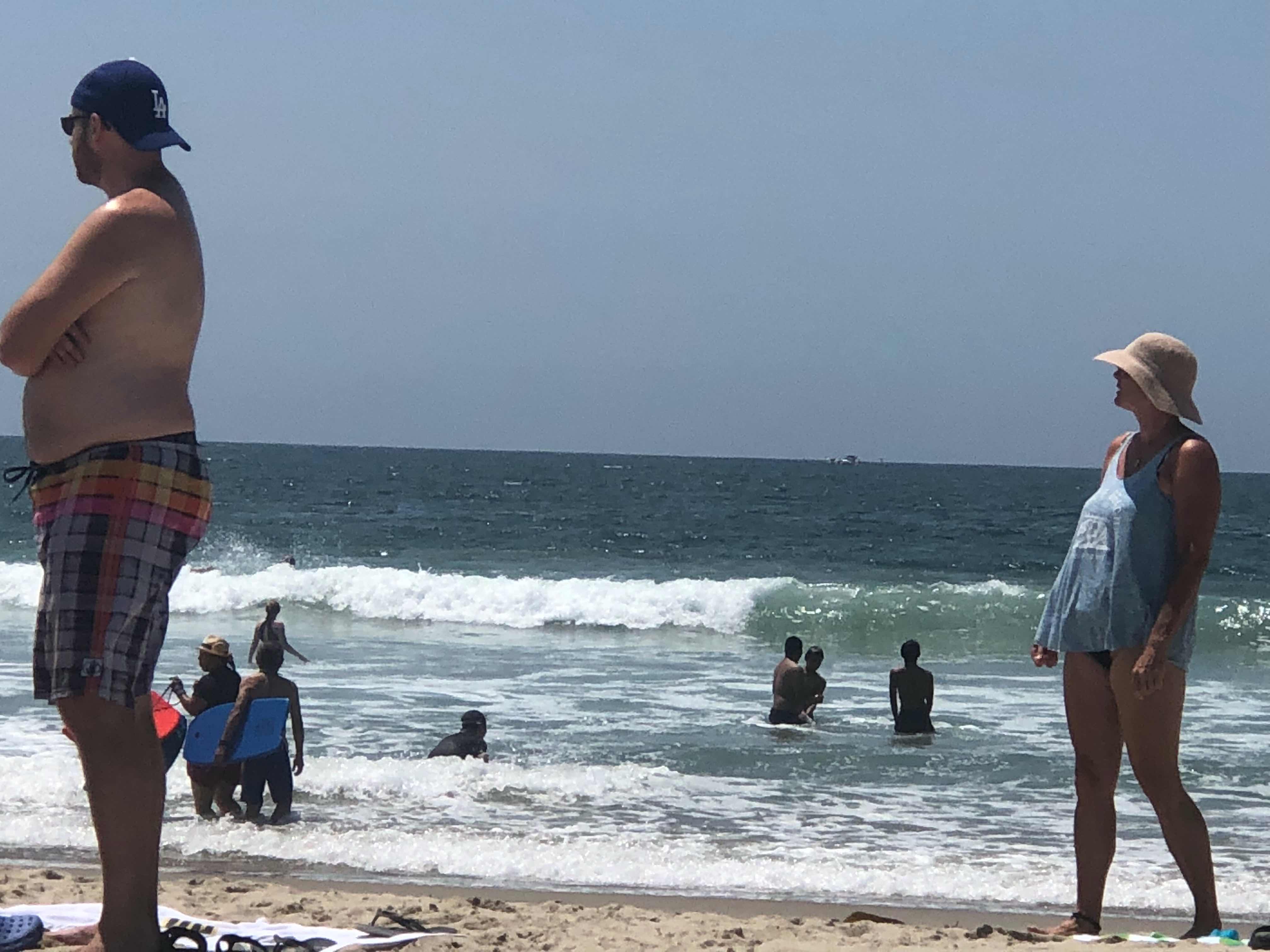 Such a gorgeous day. The temps were about 80ish and the water was 70ish.
It was so incredible. 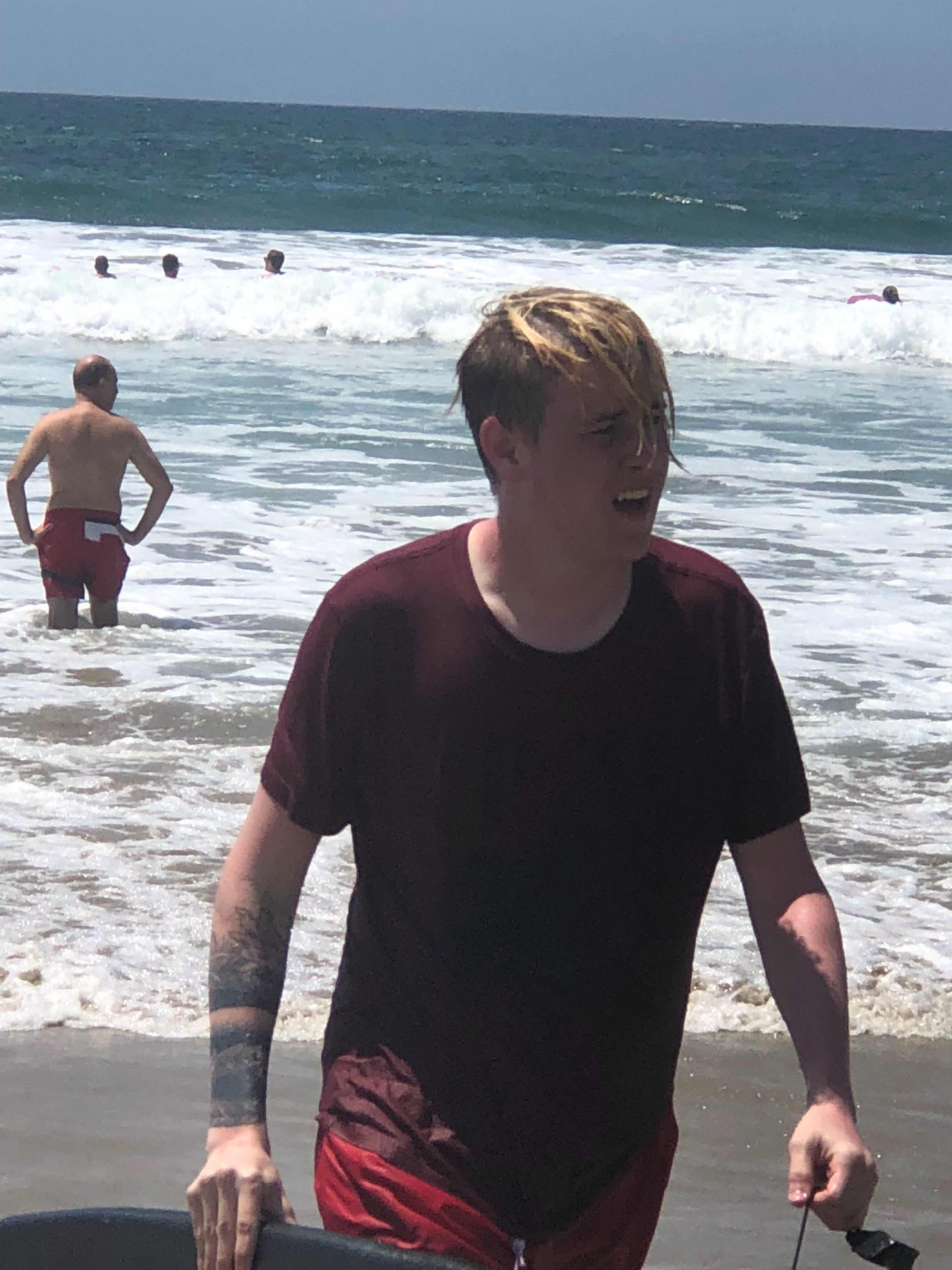 The left side of his face had no sunburn because of the way his hair fell across his face. 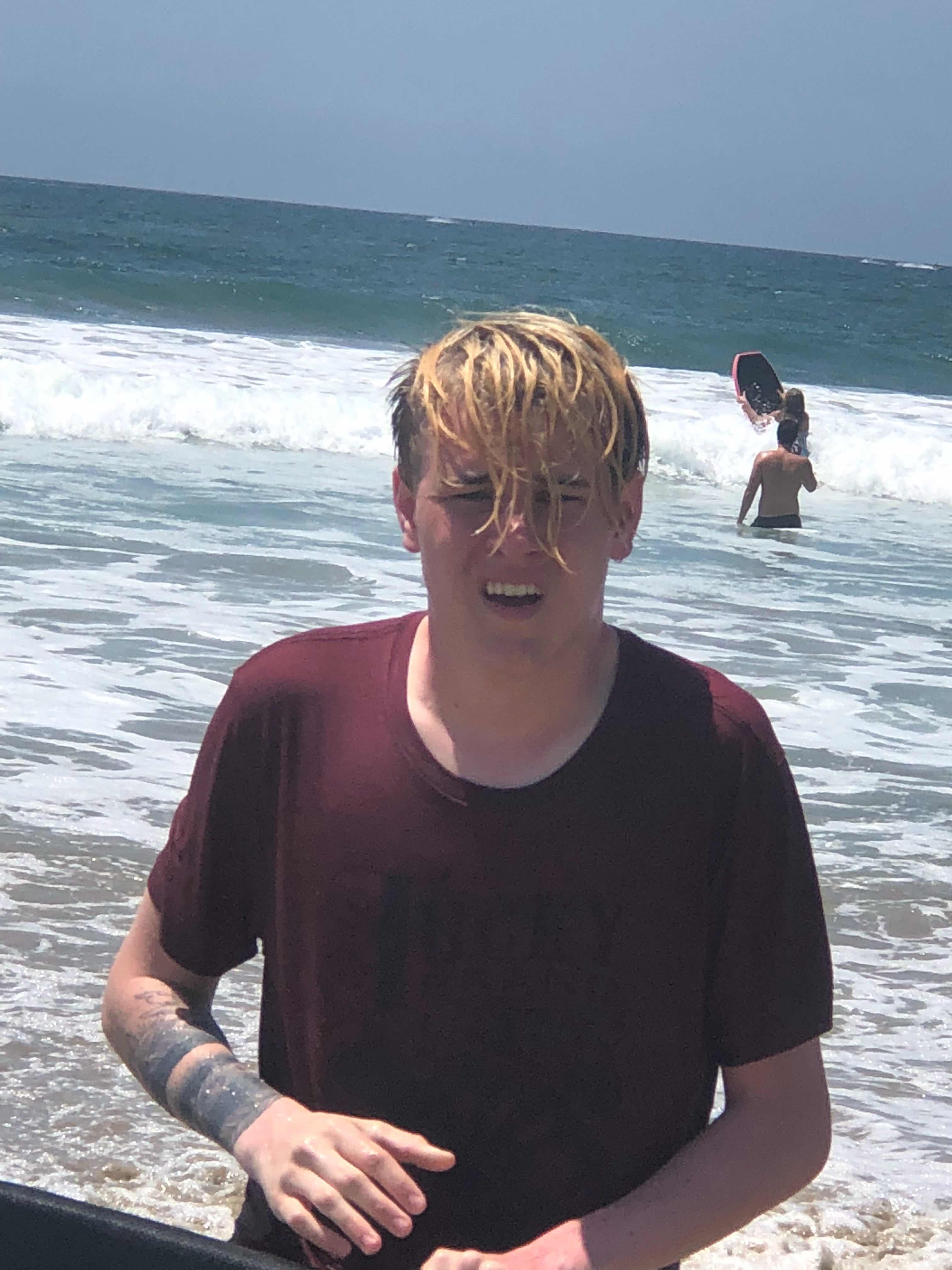 His hair is so long in the front that he started wearing a man bun,
And liking it. 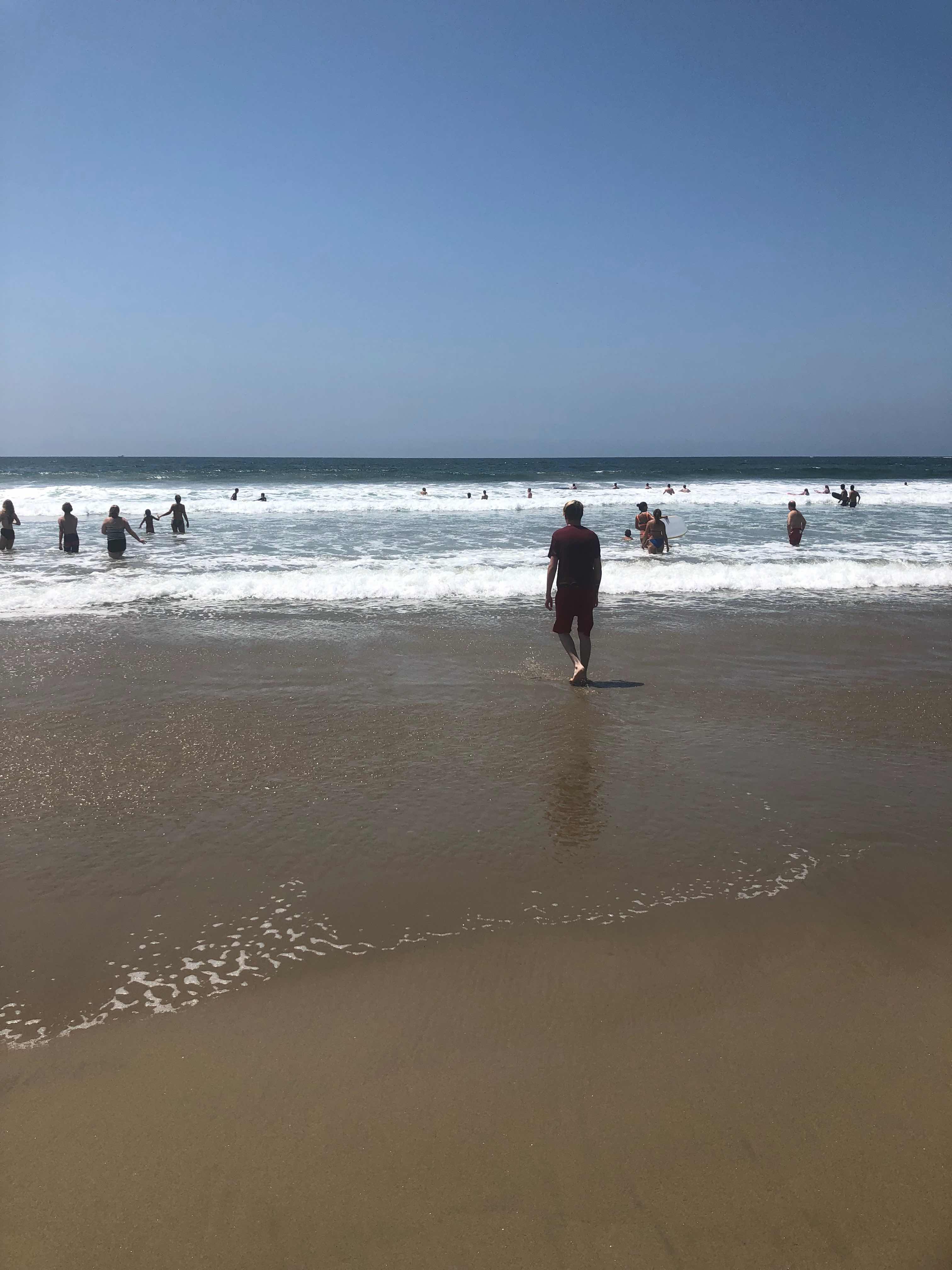 Couldn’t stay out of the water 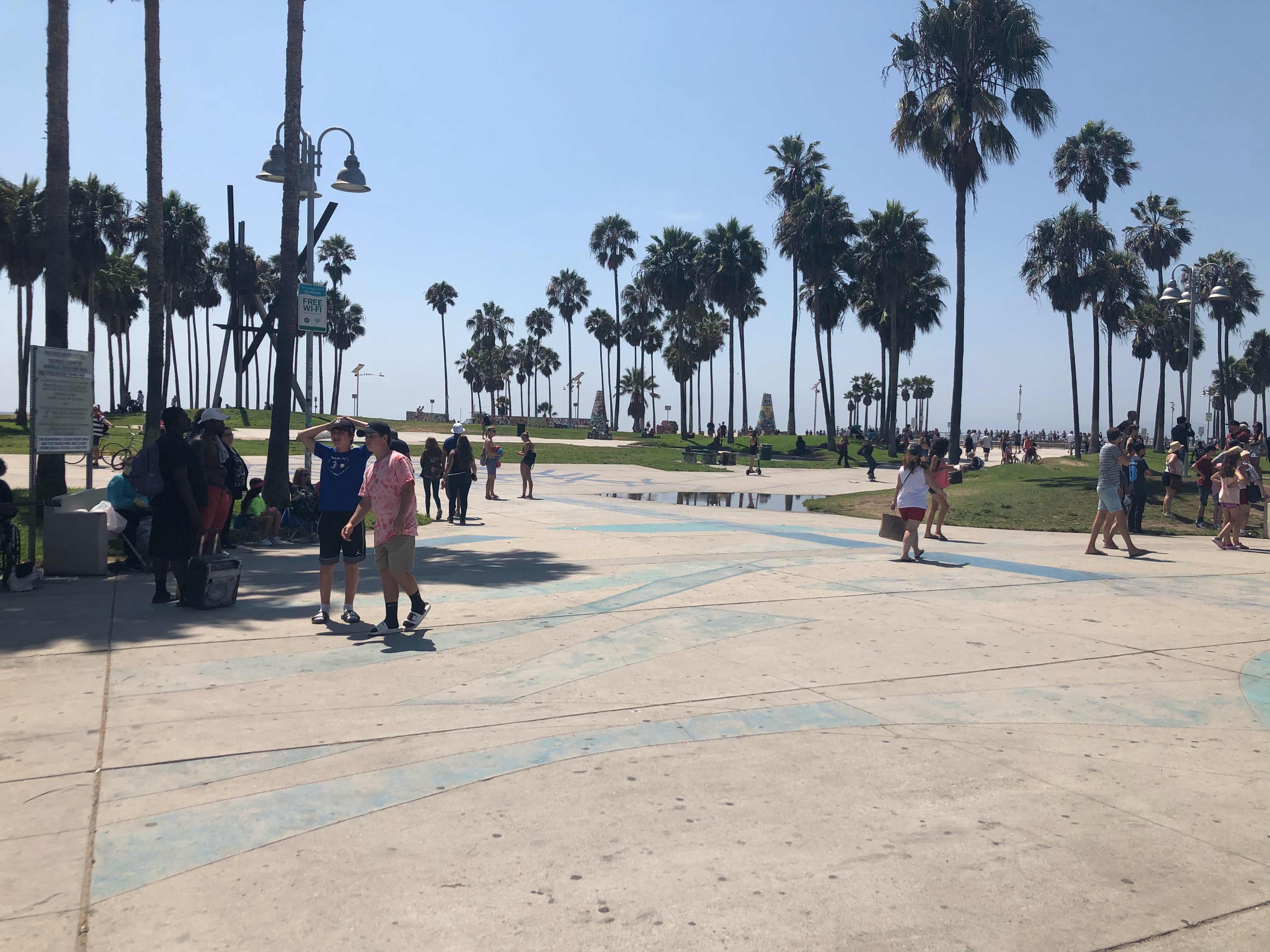 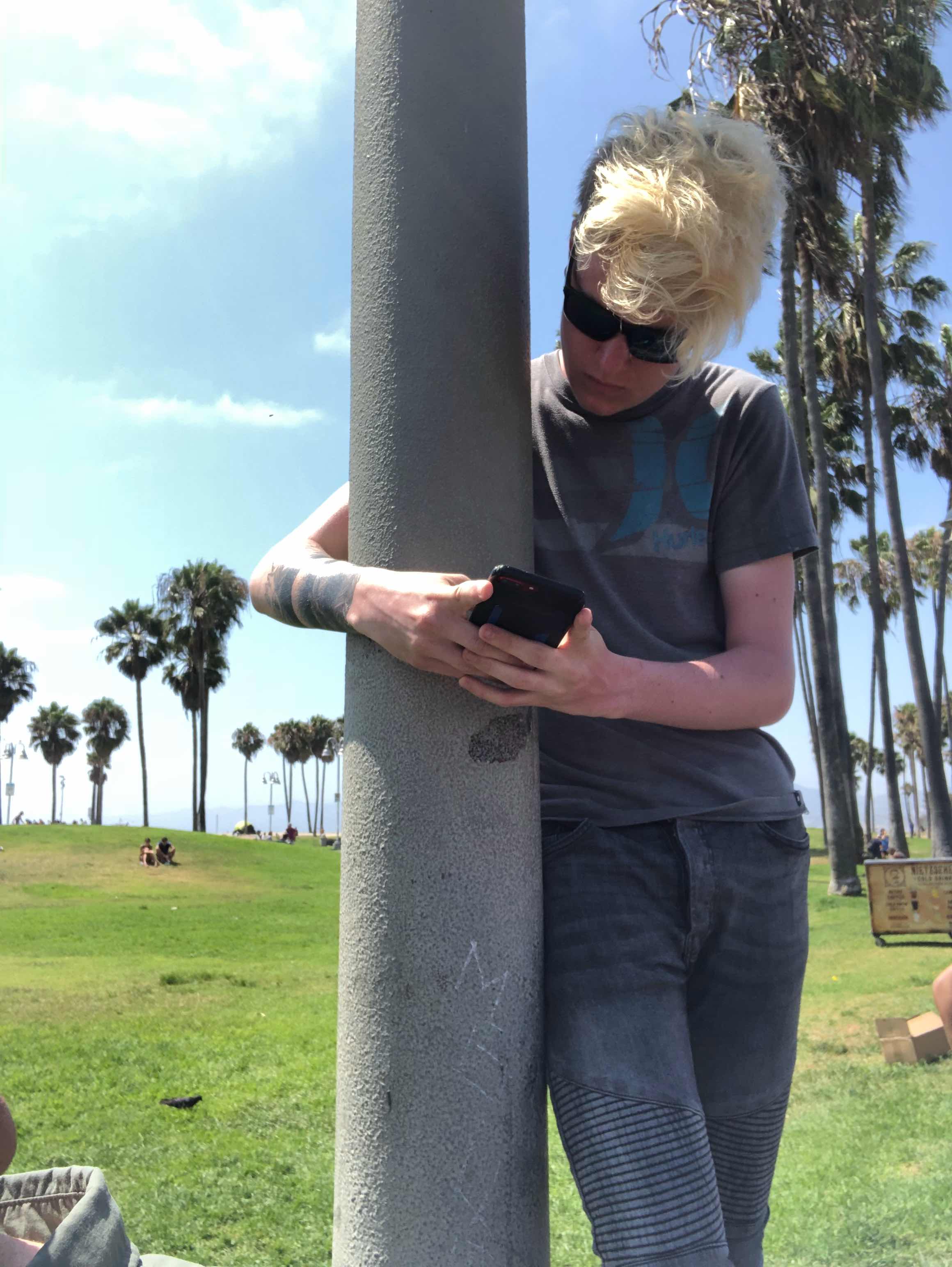 All things are interactive with the phone.
And yes, he was this sunburned. 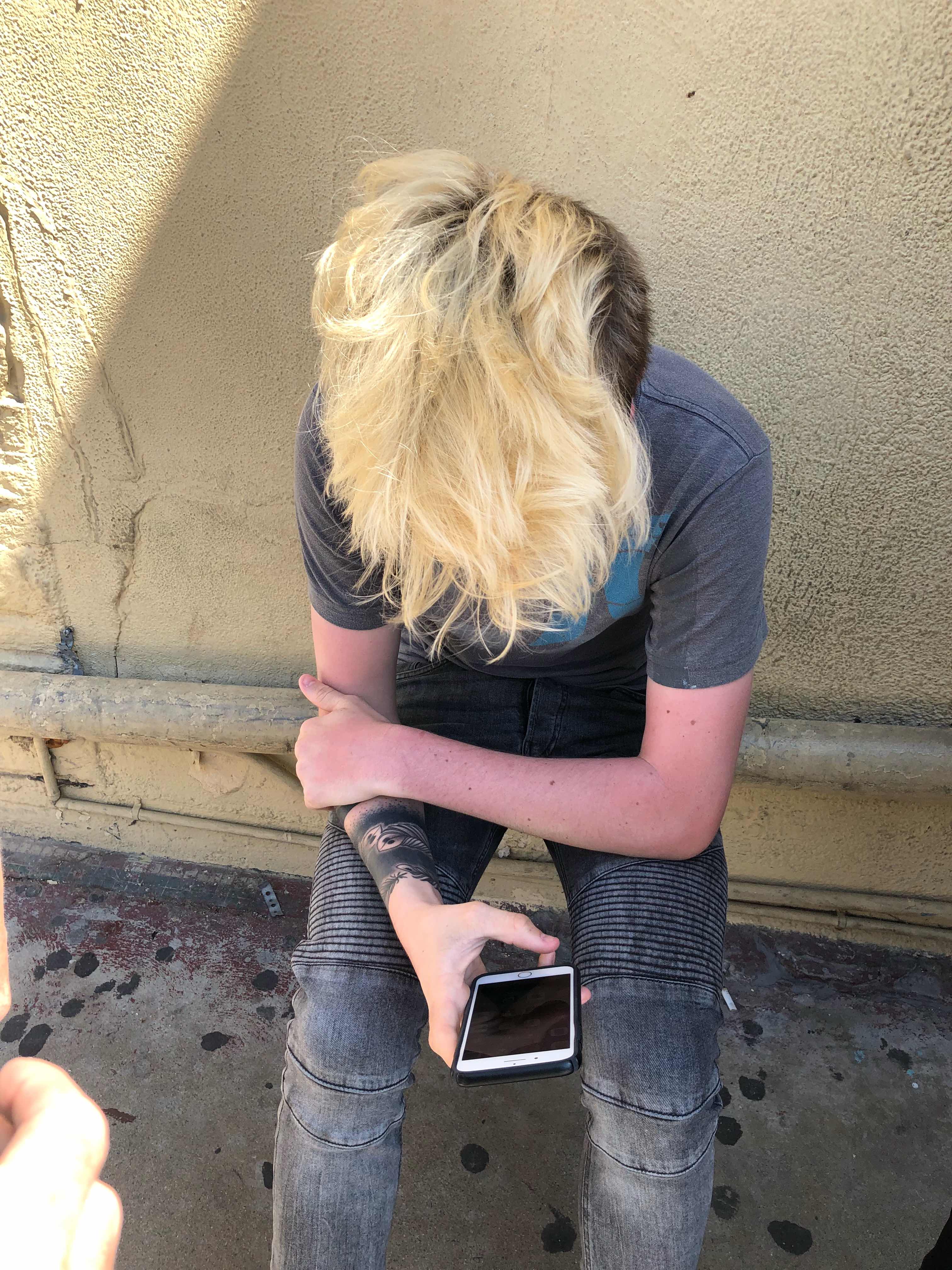 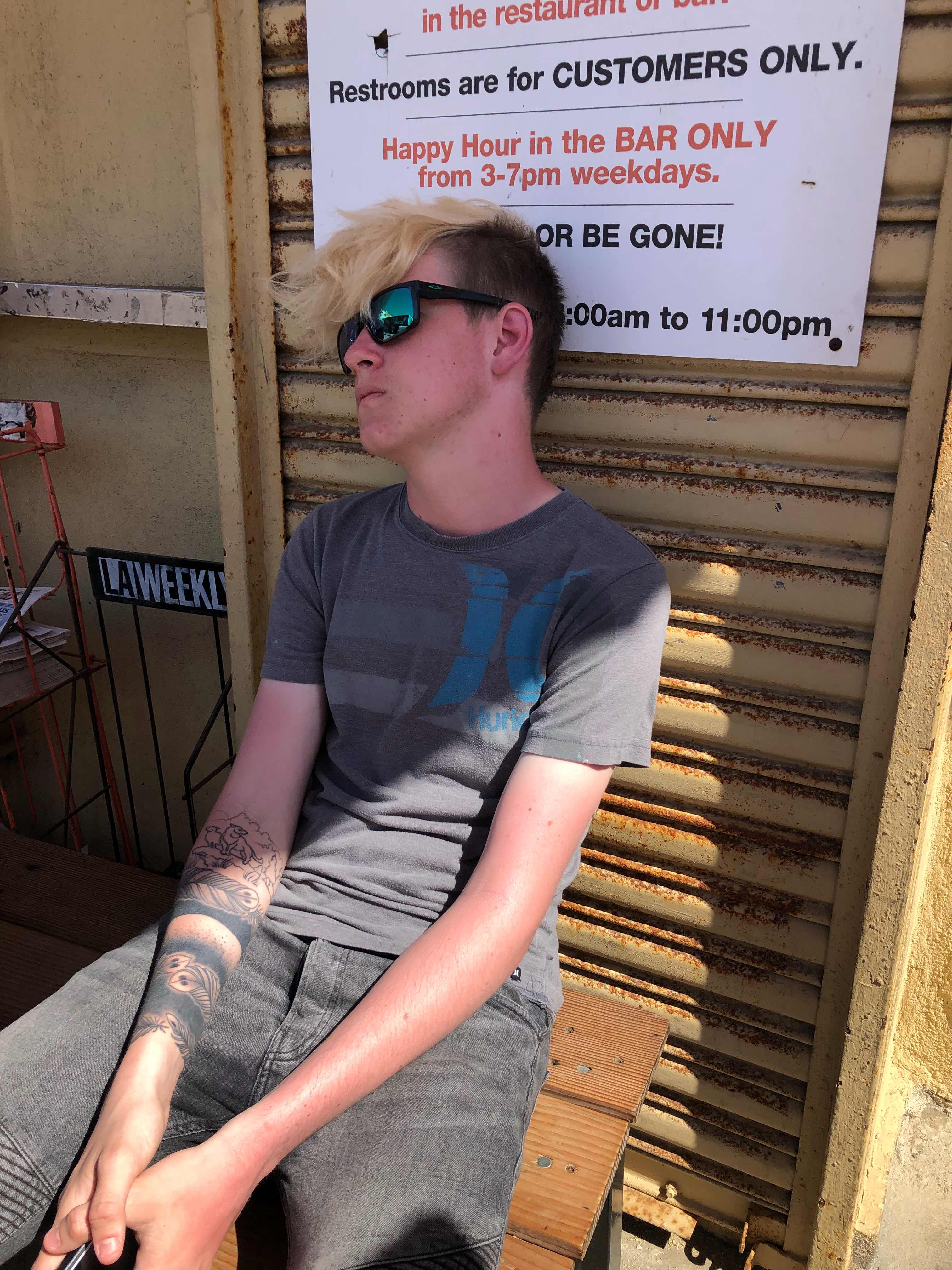 Our peacock.
Waiting to be seated at the Sidewalk Cafe. The food was plentiful and decent.
We were all pretty sun sick and sun tired.
That was our last day at the beach, but Tristan was already talking about moving to Southern California after he graduates from college.
Posted by Cricket at 4:42 PM