Today was our scheduled bodywork/massage appointment with a bodywork/massage person I found online. Her name is Jean and I really liked her photo and bio on her website, so I contacted her with a brief history of Ashke and what I was dealing with. This was Monday night after our ride. I was hoping to find a way to ease his pain between now and when he sees Diane.

After a bit of a directional snafu (Jean got an unintended tour of parts of Golden and Arvada, and I discovered that the barn does not GPS well) Jean arrived to meet Ashke. I had been watching him walk when I had him out hand-walking and grazing on the new spring grass and the mechanics of his right leg are pretty obvious right now. He swings his right leg up, in and forward and then kind of stomps it down onto the ground. The in motion used to be very severe, but now it's just a bit to the inside, in a half-moon arc. When he goes to set it down, it kind of plops instead of stepping into the movement, which is what creates the short striding on that leg. The motion is abreviated.

When Jean got there we went into Ashke's stall. Jean positioned us so I was against the wall and Ashke was tethered by his lead rope through the front of his stall (it was looped through the bars and I held the end). Jean wanted me to the side, so that Ashke would focus on her and she could watch his expressions to see what he was feeling. That way she was the center of attention, instead of me, and he would lock on her and what she was doing. I could watch and ask questions, plus she explained what she was feeling as she went along.

I could tell when she introduced herself to Ashke that he liked her. I thought her energy seemed very good when I saw her picture, but it was even better in person. She started on the left side and began working on his neck. Within a couple of minutes I could feel him begin to release tension and become an active participant in the bodywork. She massaged the muscles in his neck and shoulder, then did the crest of his neck from just behind the ears to his withers. He was licking, chewing, shaking his head and pawing in response.


We were watching his lower lip and nose quiver in response to Jean's touch.

Sidenote: I read an article that suggests that pawing when in the crossties and being groomed may be a pain or discomfort response, rather than a boredom response. The study evaluated pain markers in the horse's facial expressions, in addition to, the pawing response. The summation of the article hypothesized that owners that reprimand their horses for pawing while being groomed are missing a key indicator of deeply buried muscle pain. 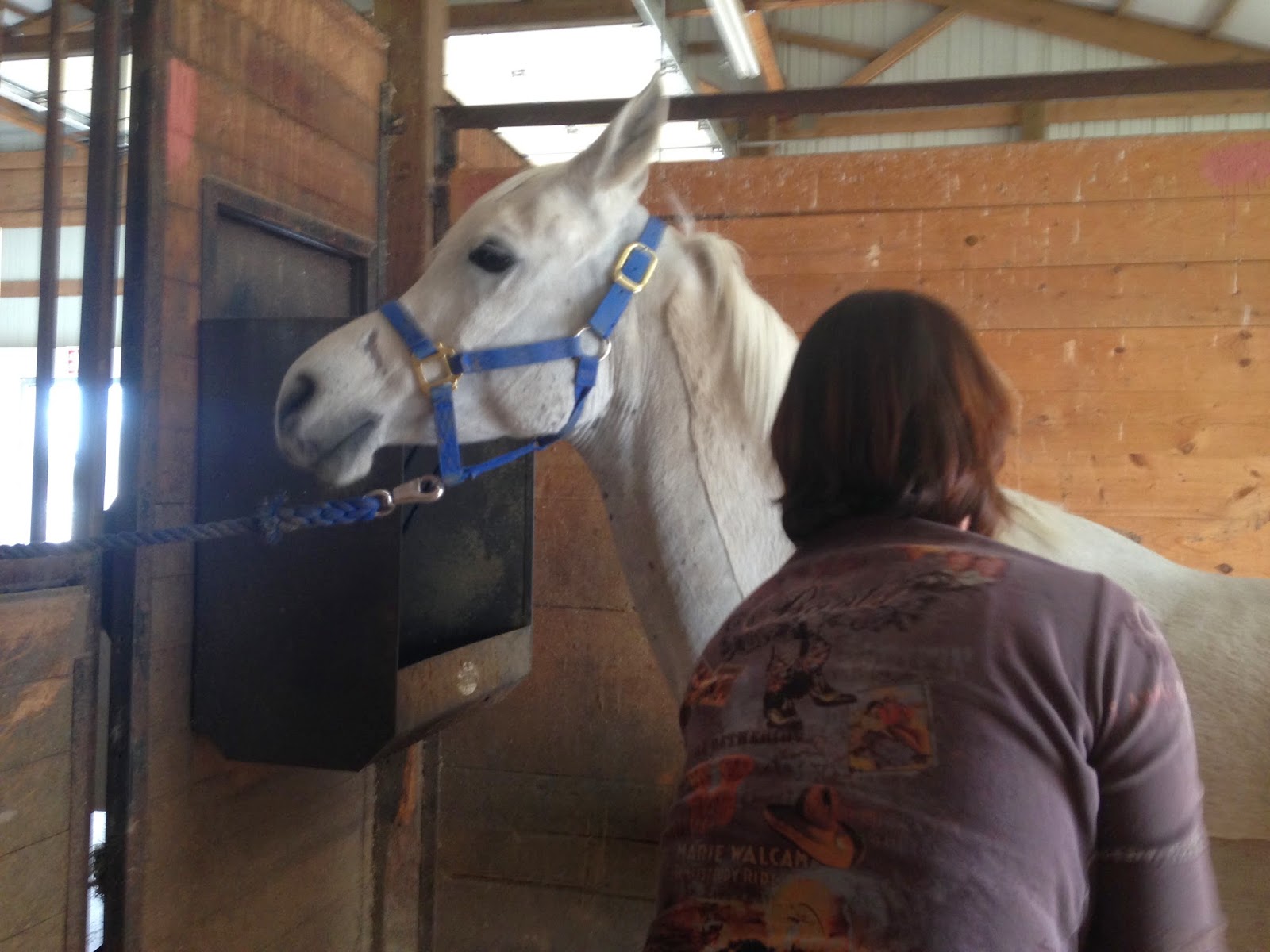 Anyway, Jean worked down his neck and deep into his shoulder.  Then worked down the leg and asked for some stretching. This has always been an issue for me, but both Diane and Jean were able to get some good stretches with his legs. Jean started by bouncing and rotating the hoof, then lifted the leg as high as it would comfortably go and held for a couple of seconds. Next, she extended the leg back to disengage and drop the shoulder. You could see the moment that the shoulder dropped and released the tied up energy. Ashke shuddered and then shook when Jean released the leg. After doing that stretch a couple of times, Jean then stretched the leg forward and kind of to the side for another release. Finally, she lifted the leg from the knee up in front of him, then stretched it forward to the ground for a release. By this time, Ashke was really into it.

Jean worked on his poll and head next. She said he had no tension (or very little tension) in his poll and TMJ. In fact, she turned to me and said "you must be a very calm rider who does not get stressed when riding."  I kind of wrinkled my brown and looked puzzled. She said that horses who are ridden by people who are anxious, nervous and scared carry a lot of tension in their poll. She worked on his face and showed me the pressure points to massage if he starts showing signs of allergies. Then she moved back to his neck.


This was the fourth try at this stretch

Jean placed her fingers on each vertebrae and asked him to flex toward the pressure. The first couple of times he released the pressure by moving his hind end, then shaking his head vigorously to rid himself of the pressure. By the fourth attempt, he was able to touch his side, just about at the girth area really easily. You can tell from his expression that he is enjoying the bodywork. Jean also did a very deep muscle massage at the front of the scapula, bending him into the pressure and sliding her hand and arm down the groove his bend creates in his neck. He really liked that one too.

Then Jean moved to his barrel area. There was no sign of pain or discomfort in his withers or back or loins. (Yeah!!! for my Alta Escuela. There is no better confirmation of saddle fit than no reaction during a massage.) Then she moved to his hind end. 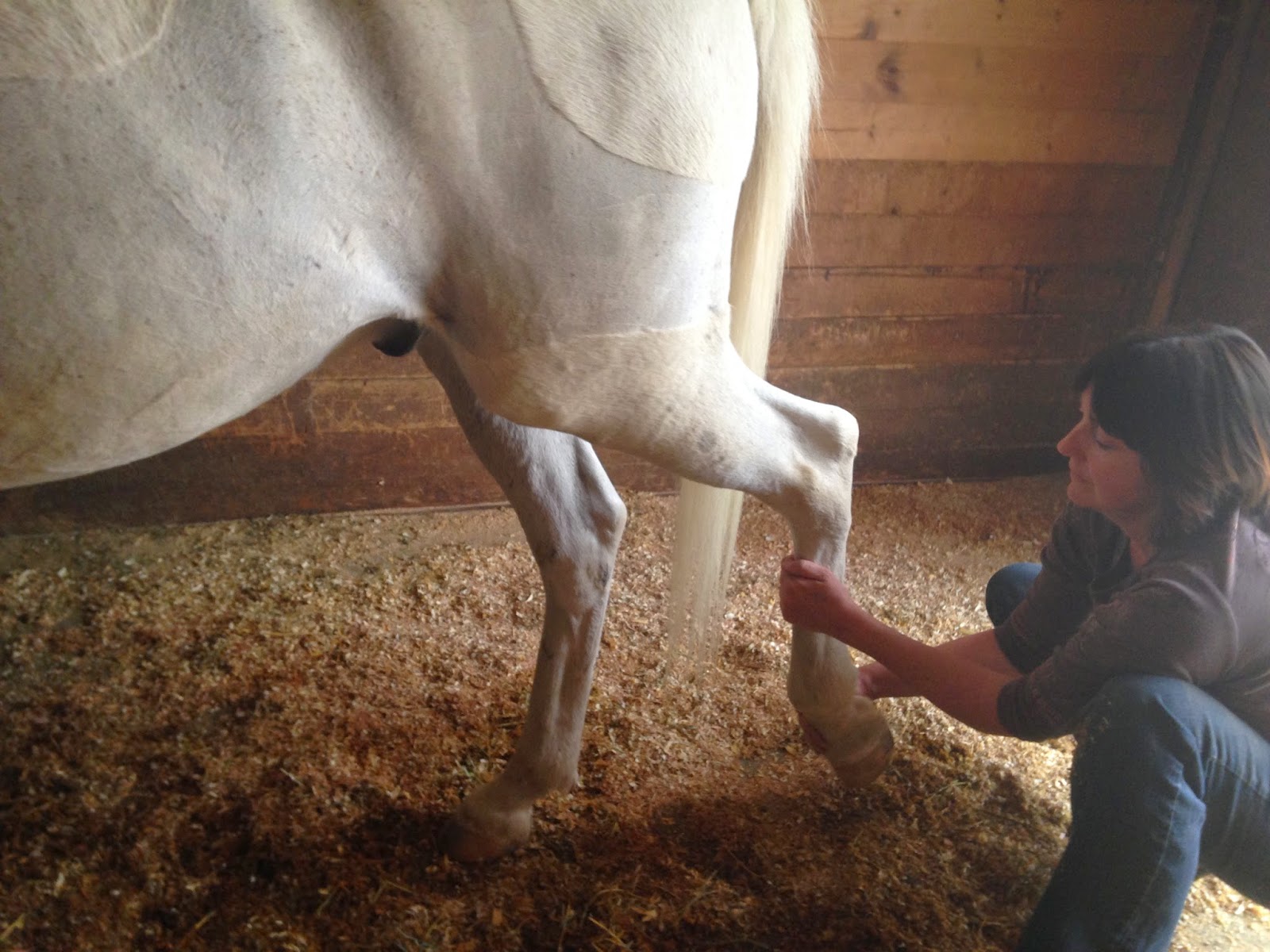 About the most stretch he was willing to do.

This is where there are a lot of issues. We struggled to get a stretch on the left hind, and he did not want her massaging his glutes from inside the leg. In fact, he lifted his leg and warned her to not touch him in that area. She tried again and he again protected himself. She then tried the stretches on his hind legs, similar to that of the front legs with the exception that you want to stretch the hind leg out and touch the toe on the ground behind the other hind foot to truly drop the hip. She couldn't get a true release stretching forward either. She showed me some trigger points around his tail and below his anus to help release the tension he is carrying in that area. 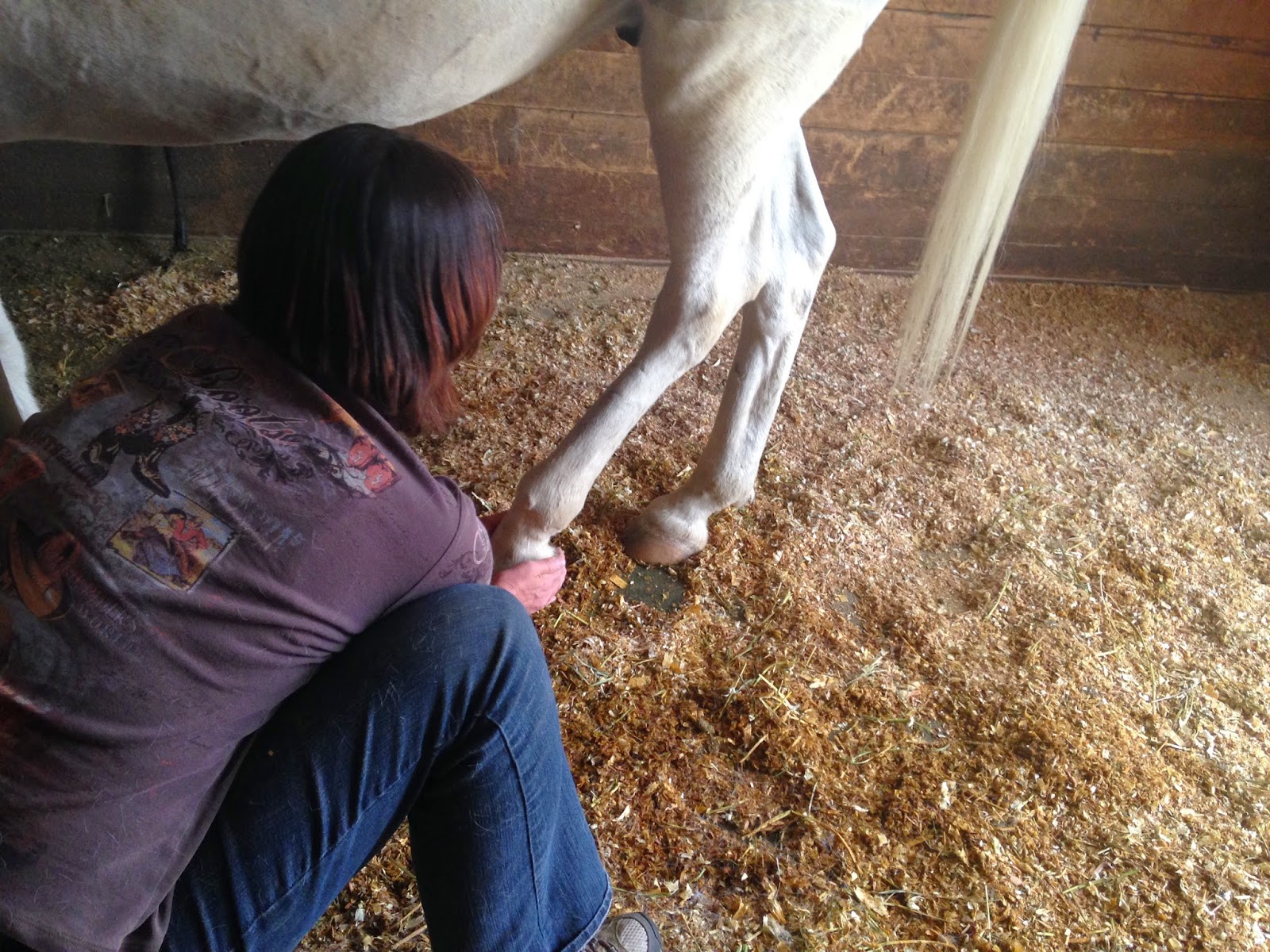 The stretch forward, once again not really wanting to let go.

When she moved to the right side we discovered he was a little more stiff and more reluctant to try to get a good stretch on his front legs. I've known for a while he was more reluctant to let me handle his front leg, but haven't really pushed it. He was less willing to let her massage his back leg, protesting and lifting his leg in response to any attempt to massage the back or inside right leg. The stretches on the back right leg were less stretchy than on the left. Ashke reacted to the stretching and massage with quiver lip, yawning and shaking his head, all signs of release. Jean showed me the stretches to do with him to help him begin to gain flexibility in his hind end. She finished up with a rocking exercise (which reminds me a lot of the massage exercise J was shown to use on me to help my back release tension when I was pregnant.) I tried it and Ashke was not as happy with my attempt as Jean's. I was trying to get a lot more movement than Jean, whereas Jean's rocking was more of a wave through their bodies. I may not be able to do that one, since I have zero rhythm when it comes to that thing.

I think the bodywork was a great thing for Ashke. I scheduled another visit in two weeks, which will be right before our next long ride. In the time between now and then, I plan on doing the stretching with Ashke that I learned. Especially in the hind quarters and see if I can't get a release and relaxation in his hips.

Jean's assessment is that there is less wrong in his muscles and more wrong emotionally. She can't speak to the chiro/accu aspect, which she leaves to Diane, but she doesn't think he is damaged from a muscle point of view. She thinks there are other things at play in him emotionally.

I really think this is tied to his castration. He might have been dropped on his hip to castrate him, which they would have done to his right side to protect his left patella. I know he was castrated late (17 months old) which can be more traumatic and problematic than when they are done early. The fact that he so rarely drops (I've only ever seen him extended out of his sheath three times in three years), is difficult to clean even with sedative, and is still so protective of that area that I really believe the trigger point was his castration.

It makes a bit of sense from an emotional point of view that he is super tight and not relaxed after having teased and been abused by a mare. Let's not discount the emotional life of horses. They retain emotional memories in their bodies, just as we do. It is not beyond the realm of understanding to think a horse could be butt hurt by the aggressive rebuff of a mare. Especially since he and Cali had a very special connection and now they are separated. They had been on turn out together for two and a half years.

I talked to J about his reluctance and my supposition. She suggested I contact the psychic again to talk to Ashke about the incident. If he isn't stretching and relaxing better by the time Jean comes out again, I will.

My plan, though, is to talk out loud to Ashke for the next two weeks and work on getting stretches from him, on both his front and back legs, plus his neck for good measure. I'm going to tell him about the breeding practices of big breeding farms and AI collection measures. I'm going to tell him about the difference between showing in a halter show and our showing in a WE schooling show. I'm going to stop carrying the dressage whip, since those are used in halter training to direct and reprimand the halter horses. I am going to describe the limited life he would have had as a stallion, locked in a box stall and brought out to perform for strangers.  I'm going to point out that he and I would never have met if he had remained a stallion, that he would never have ridden on a trail, and that Working Equitation would not have existed in his world. I am also going to tell him that I love him because he is a gelding, and that I would not have my magical white unicorn Prince of the Blood if he had stayed a stallion. I am going to suggest that he doesn't have to protect his penis so diligently. I am going to do this while also working on his stretches.

If he is still really tight and protecting himself when Jean comes back out on the 24th, I will contact the psychic for help in talking this issue through with him.