A few days ago, I was at the barn at the same time as C. She boards her horse, Bretia, right next to Ashke and we've chatted several times over the past few months about Working Equitation and trail riding. Bretia is a Connamara pony, and the sweetest thing. C does jumping and flat work on her and Bretia sighs and complains of boredom. C has been really interested in doing the Working Equitation and thought it would be a great change of pace for Bretia. So last week sometime, we made arrangements to ride together on Monday night.

Monday night is notoriously slow at the barn and with the spring weather we've been having, the indoor has been pretty empty. There is a family with three mustangs that join me quite frequently (the youngest woman is working with a year and a half old mustang gelding and she's taught him to lay down) and enjoy working through the obstacles with us. Last night, because of the rain, the indoor was busier than we've come to expect, but everyone there seemed to find the obstacles fun and easy to work around. 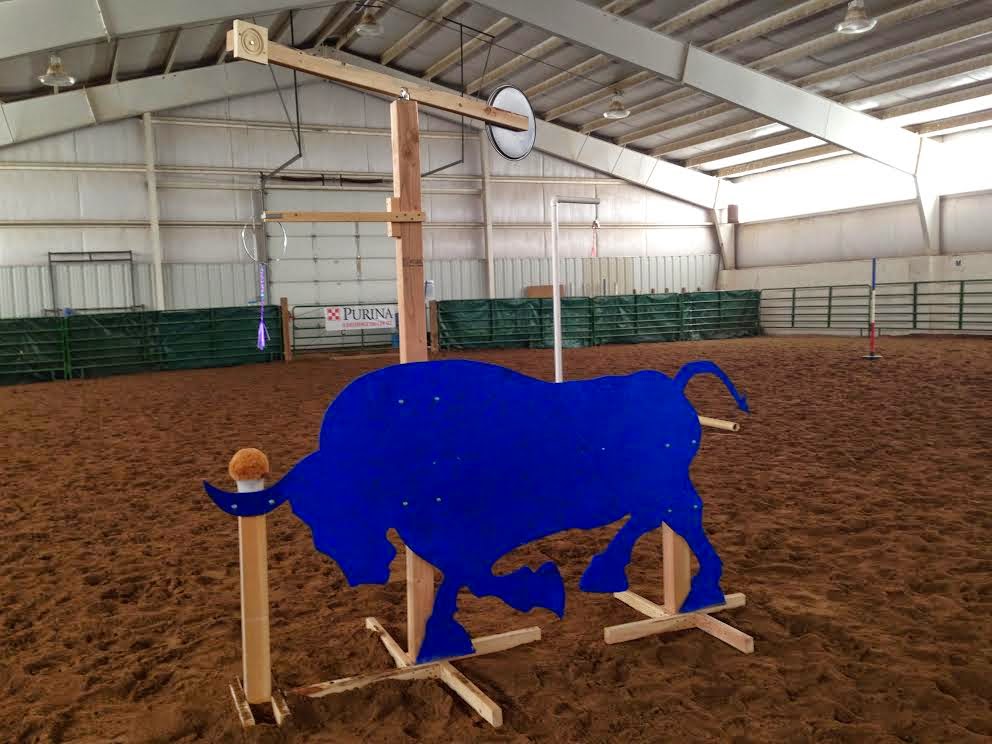 C helped me set up obstacles and we got Babe out and set up. (I've decided he needs to be adjusted. The ring and quintain are too tall to be effective, so I'm going to have J help me adjust on Sunday). We had Babe, the corridor with the bell, an L shaped sidepass, three bending poles, two barrels and a gate. (We also need to make a gate with M one of these days.) I also found an old garbage can to use to hold the garrocha pole, but we need a better way to weight it at the bottom. Once the course was set up, we went in to get our horses. We were back in the arena by 5:45 (not bad, actually).

We warmed up around the outside of the obstacles and Ashke was a mess. He was spooky and distracted. He wanted to race and he did not want to move with contact. We spent some time standing in the corner with our butt to the wall of death, with him quivering and stomping his dismay. I did get a decent enough canter for two circuits (allowing him to make the circles in the middle of the ring rather than at the ends) in each direction, but then I was done with trying to get him to focus. We moved onto the obstacles instead. Although, even then, he was a basketcase around the barrels and the poles. I think he was thinking we were going to canter them, but what I was asking for was trot work. I didn't drill, instead we moved to other stuff.

He was incredible in the corridor and I barely had to direct him to get him to back the L shaped obstacle. The sidepass was solid from both sides and in both directions (L shaped too). The gate he was calm and receptive. He knows that obstacle very well and although it wasn't flawless, it was pretty darn solid. All of his fear of the rope is gone. We did the garrocha pole and the bull, but mostly worked on just riding past the obstacle without shying away.

C and Bretia worked on all of the obstacles. Bretia was having problems with understanding what C wanted, so they broke down the more difficult obstacles into smaller parts. At the end, Bretia did the gate correctly and I think with a little practice, she will be rock solid on that. I coached C a little bit on walking through the gate before making the turn. Ashke used to panic that he was going to hit his butt walking through, but now he knows he can step forward and then back up to position us correctly and is no longer worried about the stand hitting his butt.

On the sidepass pole, I think we should have left it a straight line to begin with. Bretia was a little confused about what to do with the poles (she's used to trotting or jumping stuff lying on the ground) and where her feet should be. I got off Ashke and helped her and C get through the obstacle (Bretia was trying really hard) by directing her head and cueing her side. We went through twice and I realized we had started too difficult for Bretia and probably anyone else who hasn't been practicing this for two years.

After the obstacles we stripped tack and turned the horses loose while we put the equipment away. Ashke started playing with the big ball, lost himself in the excitement and ended up running into the panels against the wall, slid over the top of the ball and got himself completely fubar'd. Nothing like high-centering yourself on a red and black ball. Seriously. He kicked and stumbled his way out of it, snorting and blowing at the ball. I was worried he had hung himself up, but the other two women watching didn't think his legs had gone inside the fencing. He was moving fine afterwards and there were no scrapes or swelling.

The best part of last night was talking to the BO afterwards and getting on the calendar for Mondays (I'm responsible) to host a WE play time with obstacles. We are going to start every other Monday and see what happens. C will help me and we can get the other riders to help set up and tear down the obstacles before and after we ride. It will be awesome and give Ashke a solid practice through the obstacles at least every other week. C said there are a lot of riders that are interested in working obstacles, so she thinks there will be some solid interest.
Posted by Cricket at 9:16 AM