My last two rides were a contrast in every way.

On Monday, my plan was to ride in the indoor arena and work on our dressage stuff. We haven't really done dressage rides since the fiasco at TMR with the trainer there, and I stop those lessons because I hated what they were doing to my relationship with Ashke. I have worked on some stuff on trail (lateral work, sidepass, backing) but really haven't been worried about asking for any kind of frame. Sometimes when we are on trail I will ask him to move into a frame for short trot sequences, but that doesn't include a lot of bend, and it doesn't last very long. Asking a horse to ride in a frame for sixteen miles is going to piss off your horse, if it doesn't cripple them as well. So, although we have worked on bits and pieces here and there over the past year, we haven't really worked for an hour or so on doing dressage specific stuff.

It was a disaster.

And all my fault.

The walk and trot was okay, although Ashke was spooky at the scarey end of the arena and I started feeling frustrated. He gave a couple of pretty good spooks and instead of ignoring him and riding past that end, I reacted. It escalated into the beginnings of a fight. By the time we were trying to canter I was angry and frustrated and Ashke was reacting to my anger. We cantered okay to the right, but when we turned to the left Ashke could not hold a left lead canter for one circuit of the arena. Everytime he broke out of the left lead, he stiffened his legs, threw his head up and pogo sticked to a stop. Which pissed me off more. Especially when it happened the first time right in front of the scarey fence.

I lost my temper and it became a full fledged fight. We bounced and cross-cantered our way around the arena, both of us getting more and more upset. It was the opposite of what I always try to achieve when I ride. There was no flow, no harmony, no trying to listen on my part. Just rage and frustration. I finally got him to canter the long sides of the arena on the left lead, before trotting the corners because he would not, could not, hold the left lead around the bend.

Then I came to my senses and realized what I was doing. Ashke was a hot, trembling, sweaty mess. I was a hot, trembling, sweaty mess. Neither of us was having a good time and neither of us was happy. I put down the dressage whip (which was not helping either of us) and got a half-way decent canter in each direction (to the left I had to counter-bend Ashke to keep him on the left lead) and then I got off.

I had tears pouring down my face with the sweat. Ashke was just happy it was over, since he was confused as to why I was so angry and frustrated. I was convinced my pony was broken and there was no fixing him. I don't know if he tweaked some thing in his body to make using his right hind correctly a problem or if it was the strike to his left front (same diagonal - it could have been either or both) but he was off again. I rinsed him off (it was in the low 70's, squeegeed him and tossed him in his stall.

I was ready to get rid of him.

I was absolutely convinced that it wasn't going to matter what I did, how I did it, or how long I waited, I was always going to be right back where we were with him injured and hurting and me frustrated and crying. I've already pretty much given up the hope of being able to ride him in an endurance ride and I was feeling like I couldn't even put together a basic dressage test.

I got in the car and texted Saiph, but I knew it was a long shot that she was still awake. It was almost nine her time and she had to be up for work at four the next morning. I called J and sobbed on the phone, feeling defeated and ashamed. I had lost all hope.

J pointed out that a week ago we were able to ride in the indoor arena, working on our dressage stuff, and he was cantering just fine then. She pointed out that he had been hurt at least three significant places on his body by the mare next door in the time between then and Monday. She also pointed out that he was able to ride about sixteen miles on Sunday without taking a lame step and came home sound. Granted, he might be having some issues with the left lead canter right now, but that could be because of a tweak from fighting with the mare.

I felt even worse.

I got home and did some searching on line, found an equine bodywork/massage therapist that could give him a massage on Friday. I already have an appt with Diane and Ashke will get the next two weeks off (mom is here visiting for ten days). Hopefully, between all of that he will be back to our normal the next time I can ride him.

Tonight the plan was to trail ride in the park across the road. However, it was freaking cold when I got to the barn (funny how 55 degrees goes from balmy to freaking cold after a couple of weeks of warmer temps). I checked the indoor and it was empty, so I pulled out some obstacles. I set up the corridor with the bell in an L shape, a sidepass pole shaped like a Z (sort of), three bending poles, a small jump and the three barrels. Then I went to get Ashke. 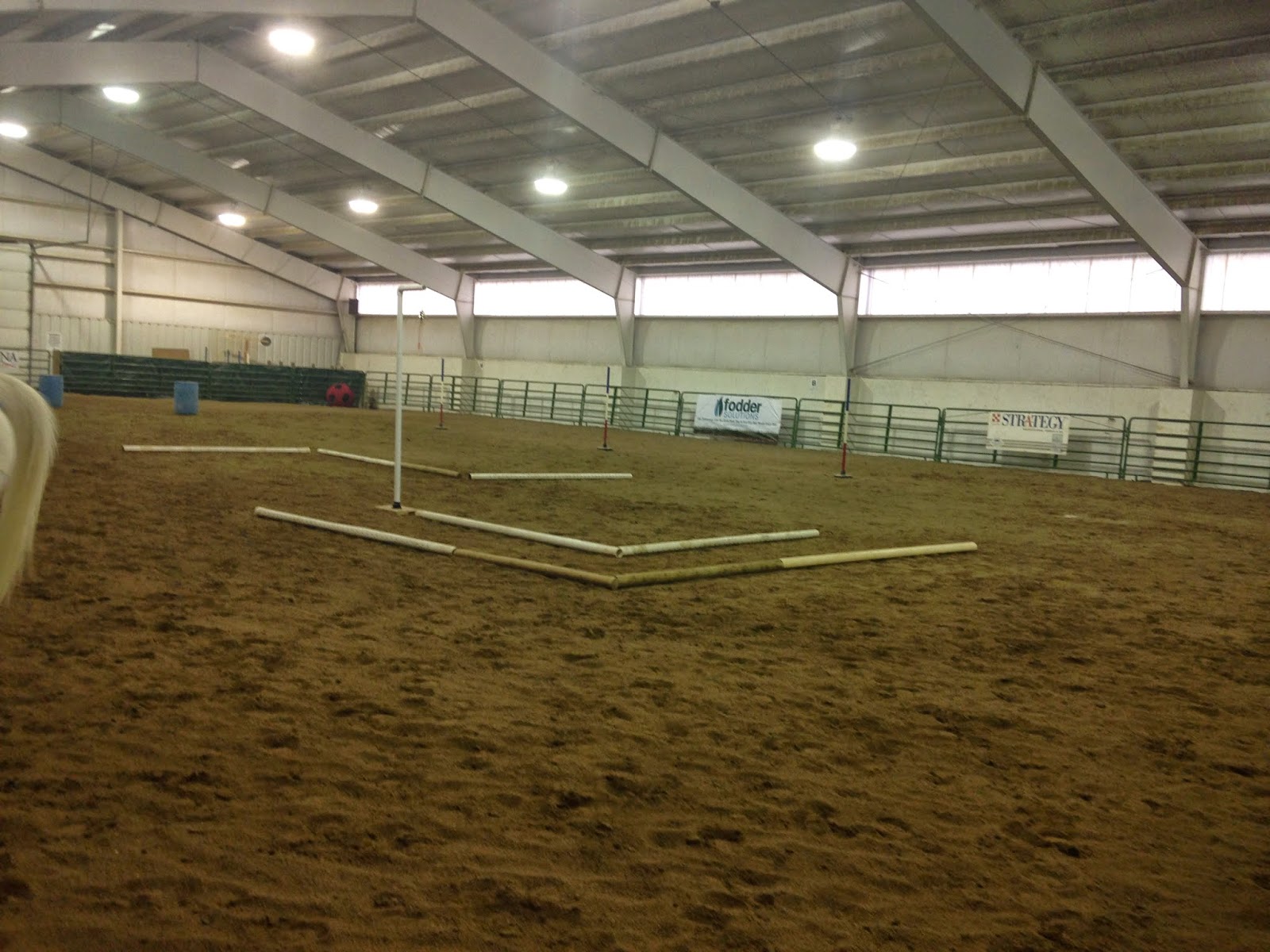 I always feel so humbled by my horse's huge heart. He completely forgave me for being a big jerk on Monday. When we walked into the arena his ears came up and he studied the obstacles. I think he has put together the fact that one bit means a ride out and the other bit means we are doing arena work and he was relieved that there were obstacles out.

We started out walking. He wanted to get spooky at the scarey end of the arena and I just ignored him. When he jumped and tried to trot away, I just reminded him that we were walking and otherwise ignored his behavior. By the third time we walked by he was no longer paying attention to that end of the indoor. We trotted both directions and then did a U-shaped canter. Ashke picked up and held the correct canter in both directions without counter bending or counter cantering. That was enough cantering for today. He did feel stiff in both directions, but I wasn't going to push it. We were both feeling way to much anxiety to try for more.

Instead, we spent our evening working through the obstacles from both sides, until Ashke was proficient or we were tired of the obstacle. We did get a little frustrated with the Z shaped sidepass when moving left to right. He kept dragging the poles out of the pattern, which meant I had to get off and reposition them. This time I recognized what I was feeling and instead of trying it again, we went on worked on our jump in both directions. After jumping several times back and forth, we tried the sidepass again. Ashke bumped the poles a couple of times, but didn't drag them out of position. We called it good in that direction and went to work on something else. After we had worked all of the obstacles individually, I put together a course in my mind and we rode it.

I feel like Ashke is getting much better at bending around the poles and the barrels. Especially once he figured out I wasn't wanting him to power or speed through them, but to hold a collected and controlled trot through the obstacles. He is also much better at holding a frame through them. He knows what I want and he was trying really hard.

For which I rewarded him with lots of peppermints.

After going through the course, I pulled his saddle and unclipped the reins. He wasn't sure why he was free in the arena. I cleaned up the poop he had left behind, then started dragging the obstacles back to the storage area. 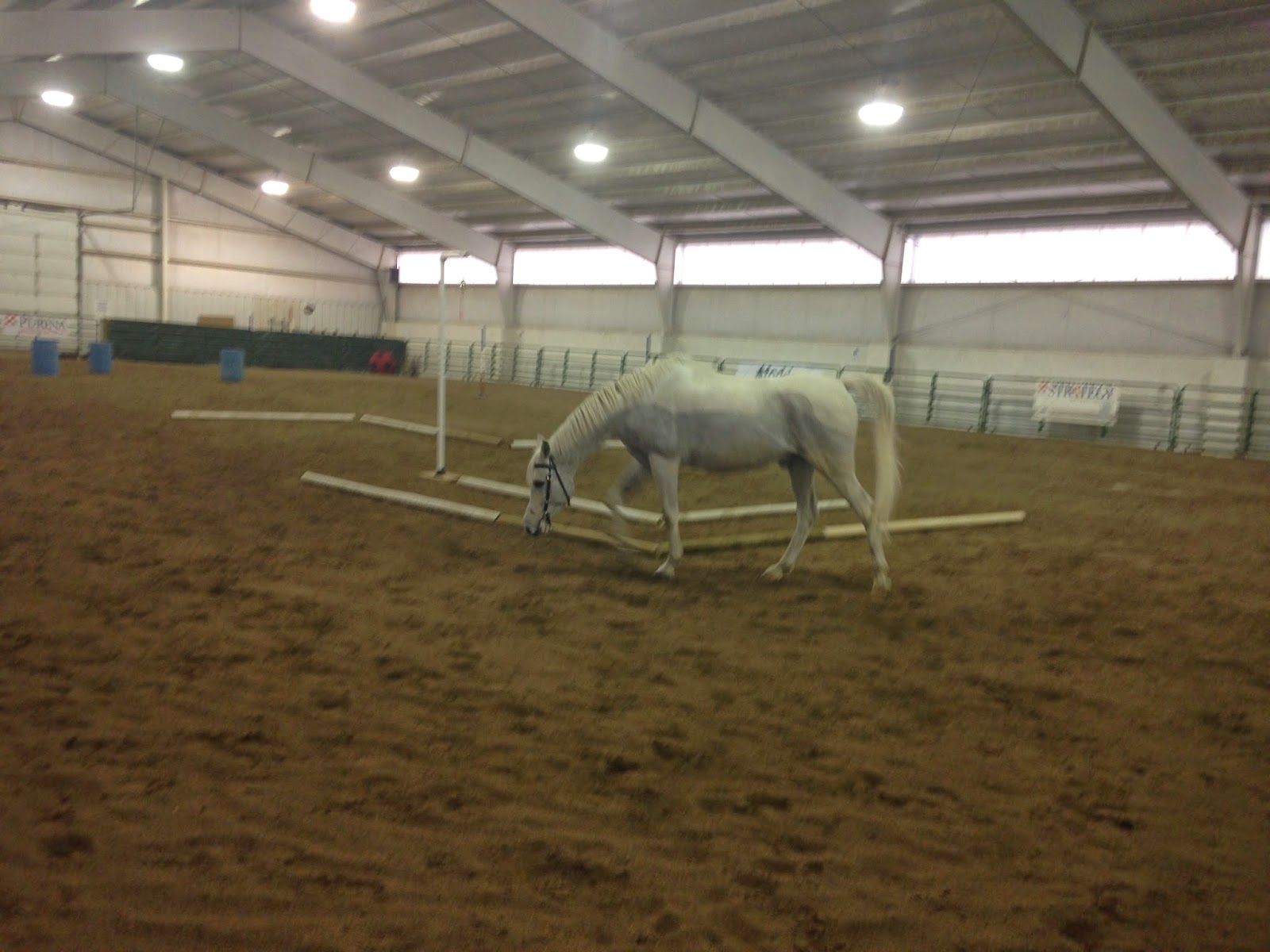 He supervised. When I had the back gate open and was hauling poles, he went behind the fence of death to look at what was there. He spooked himself and hauled butt out, breaking into a wonder canter across the arena. When I was finished I walked back to the front gate, watching him paw and circle in one corner of the arena. I wondered if he would roll. I stood next to the gate, admiring him, and waiting for him to be done when he caught sight of me out of the corner of his eye. His head came up and he wuffled his nostrils, then wandered over to me.

So points to remember.

1) Always have something in the indoor in the form of an obstacle. It lowers his anxiety. At least for the next little while.

2) Eat before riding. I am very cranky and short tempered when I am riding hungry.

3) Do not carry the dressage whip. It increases Ashke's anxiety and is way to ease to use if things start to go bad.

4) Remember that chronic means chronic. He may always have spells where he is sore or incapable of doing what you want him to do.

5) Be a better person and be worthy of his forgiveness.
Posted by Cricket at 1:54 PM