I have had a growing sense of dread of going to the barn for the past six weeks. I feel like Ashke has been dreading seeing me as well. This struggle to ride him has consumed me with both dread and despair.

I decided that if his back is going to hurt then it will hurt in a saddle we both like. I went back to the Trekkerland. Two reasons. I figure it is only really bothering him when I am asking him to collect with his back or if we ride for extended periods of time. I cut back one flake of hay a day about three weeks ago and he has lost some weight. The combination of those two things might make the saddle useable until the Alta gets here. (Thank goodness the dogs chewed up a billet or I would have sold it already.) So today, I grabbed my trepidation in both hands and took J with me to the barn.

Before we went to the barn, however, I went to the feed store and found a new bit. I wanted a low curb that I could ride Ashke one handed in. The thought process is this: I have spent six months teaching him to listen to my leg and my voice and my hand. We have worked on getting closer to each other. I have asked him to strengthen parts of his body that needed to be strengthened, but neither of us wants to do pure dressage. Working Equitation has a dressage part, but I need a different bit to ride in a competition. If we are in a Spanish saddle, we would wear Spanish attire and we need a different bit. With the help of a very nice and knowledgeable gentleman at the feed store, I settled on this: 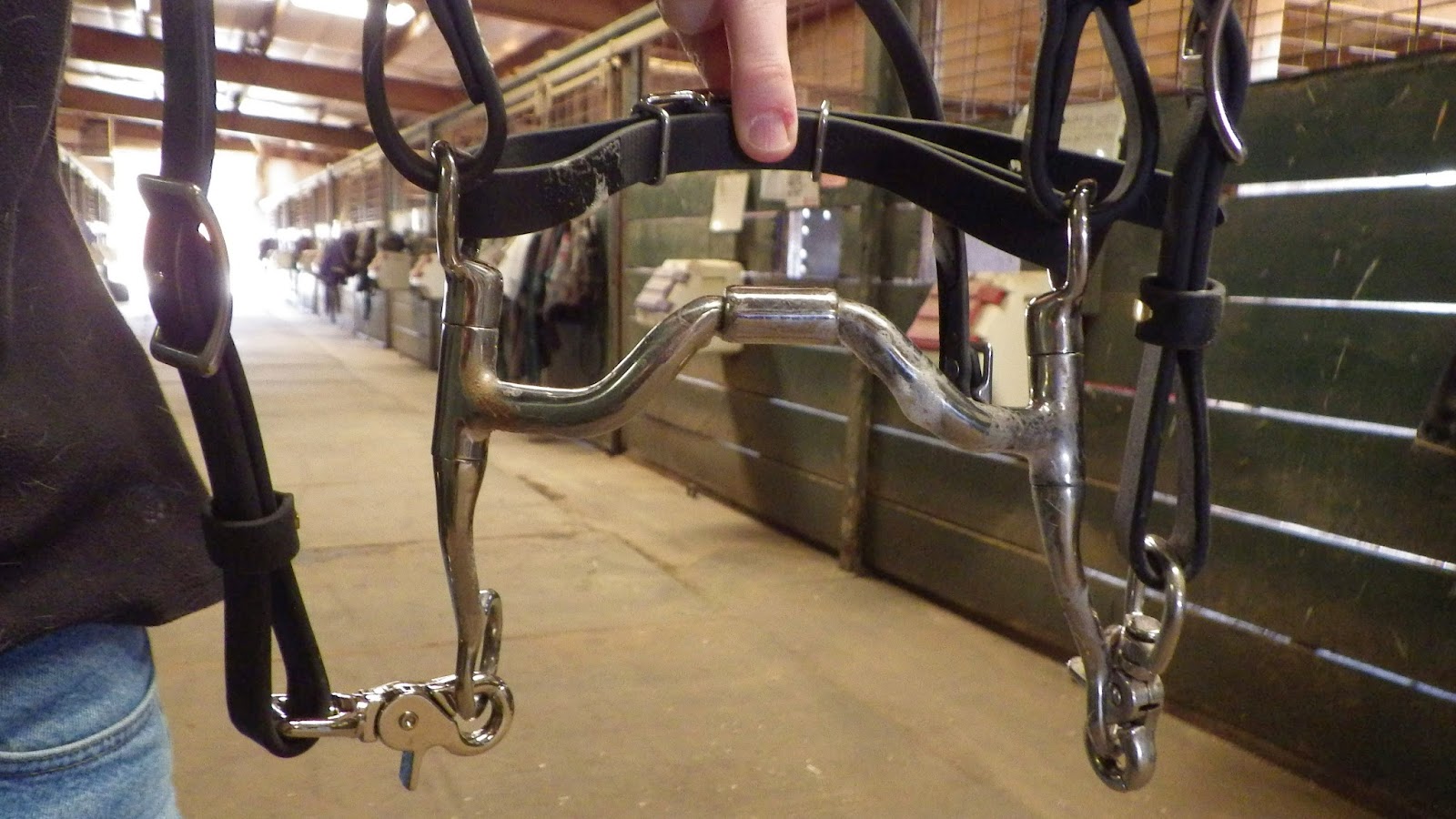 It is a 4 and 3/4 Mylar bit, with a low port and roller. It is shaped very similarly to the bit he rides in already. It is sweet iron inlaid with copper.

I also got a black biothane headstall and reins to put the bit on. The only issue is the browband is too wide and I need to replace it with one of my own. I am leaning to the new design I am working on right now, or the mountain range I made for Saiph.

He loved the bit. Even better I think than the Raised Rockin' S bit we've been riding in. Of course, I didn't ask him to collect as much as I was when we were practicing dressage, which made both of us much happier. 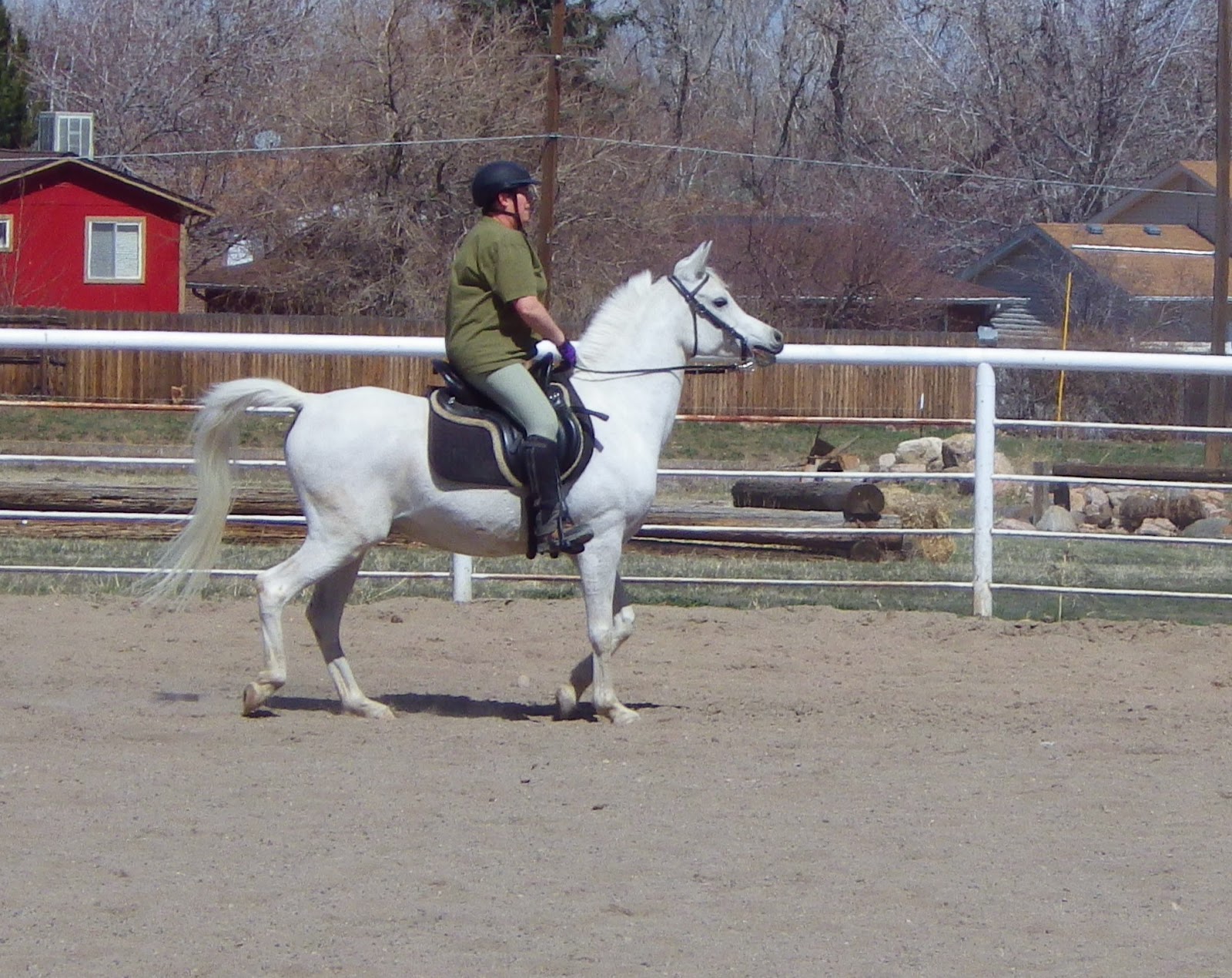 He was really hesitant at first, expecting the saddle to hurt. 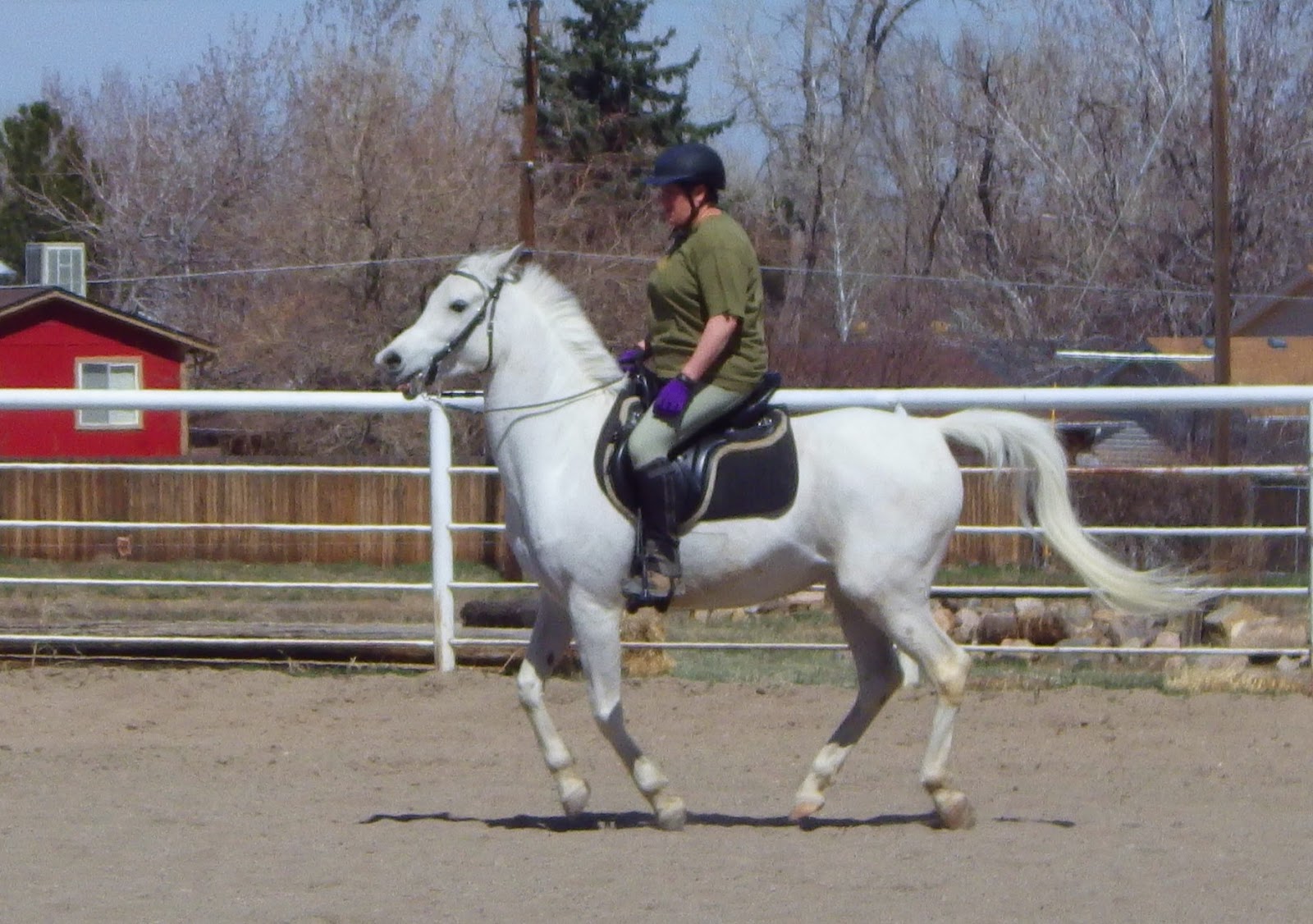 He listened very well and there was no fighting. 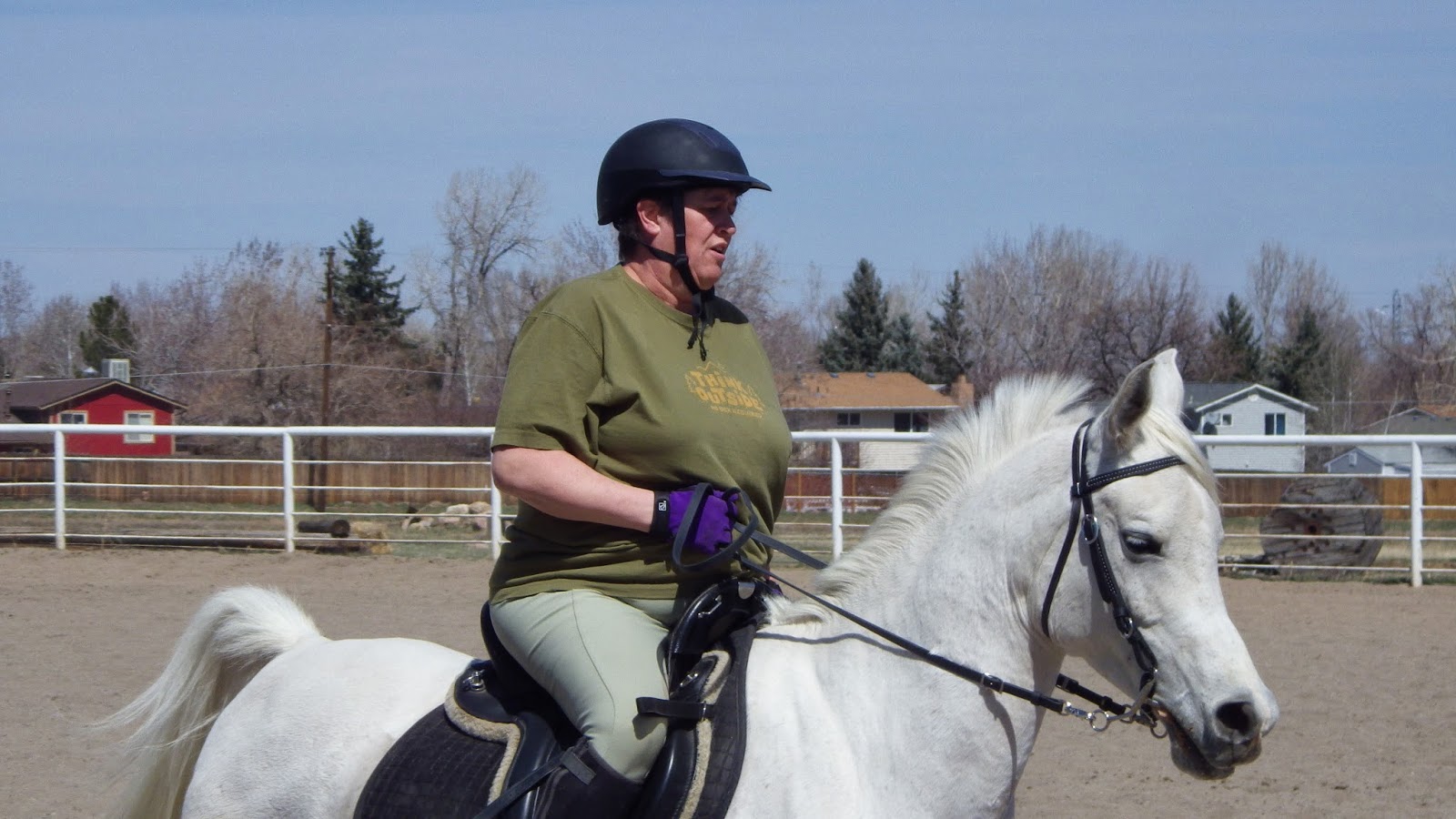 We cantered a lot in both directions. 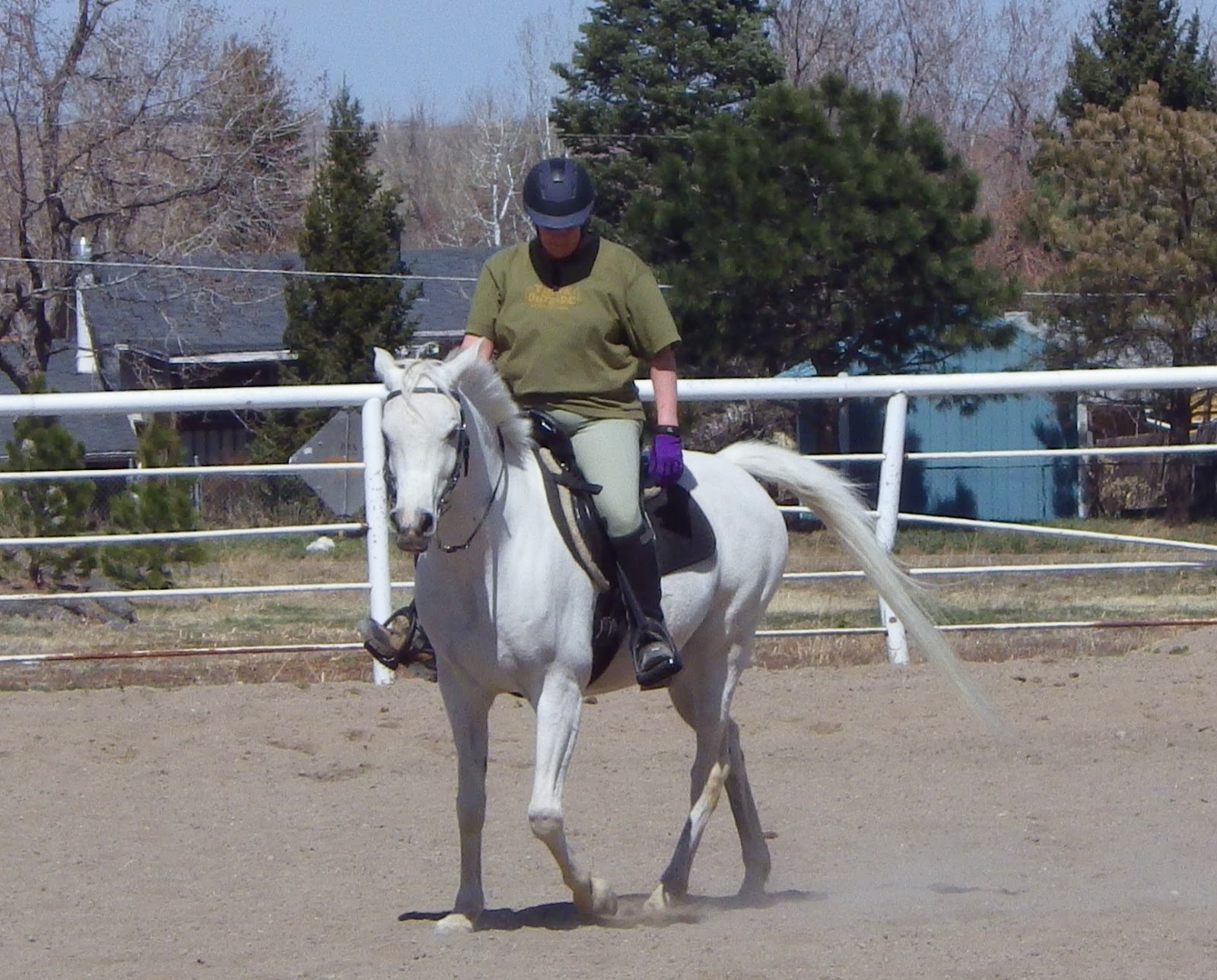 He kept his head at a decent level. And I could really feel the power coming from his butt. 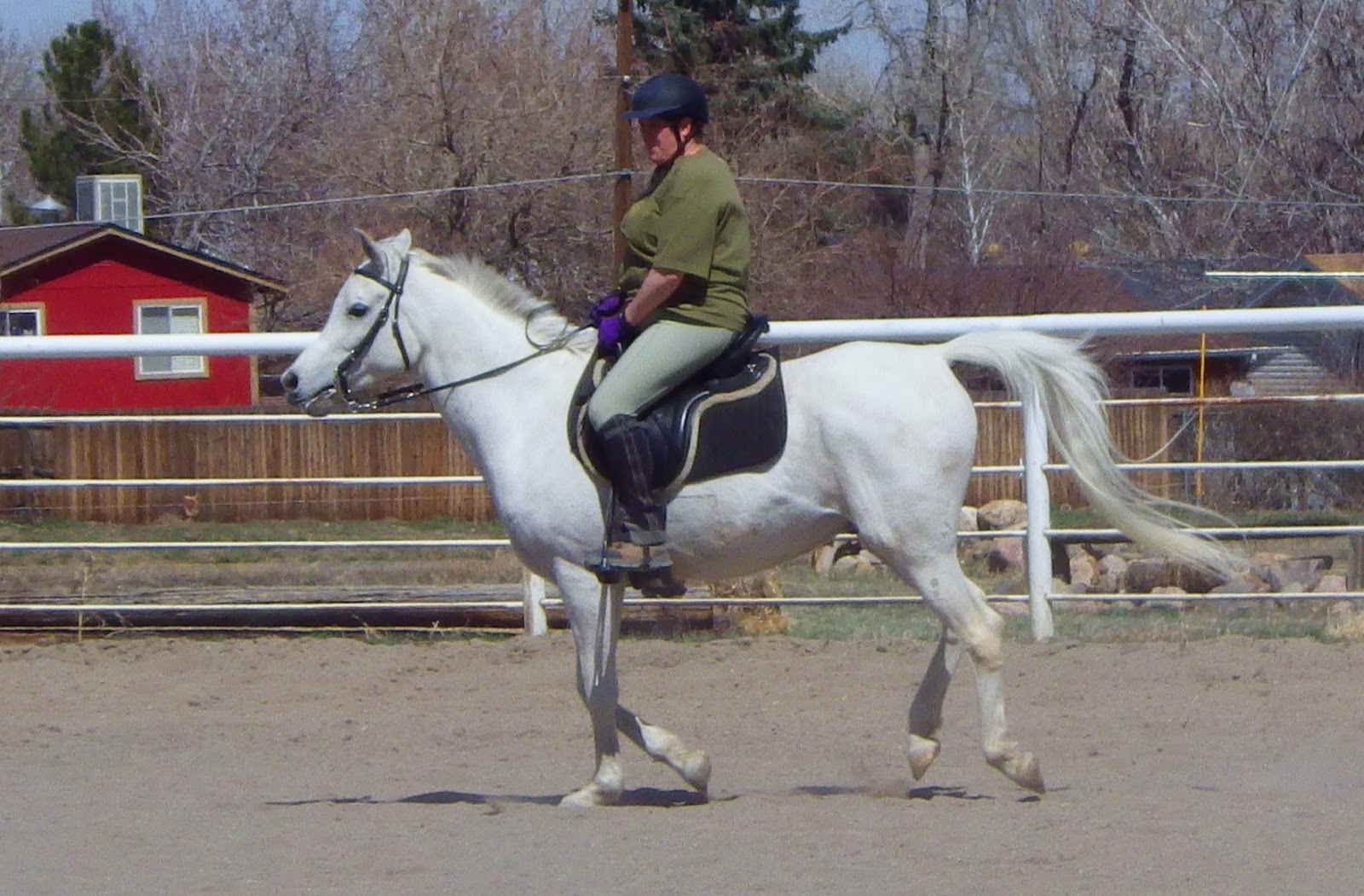 Once he figured out I wasn't going to pester him to keep his head down, he relaxed and moved so light and together with me. 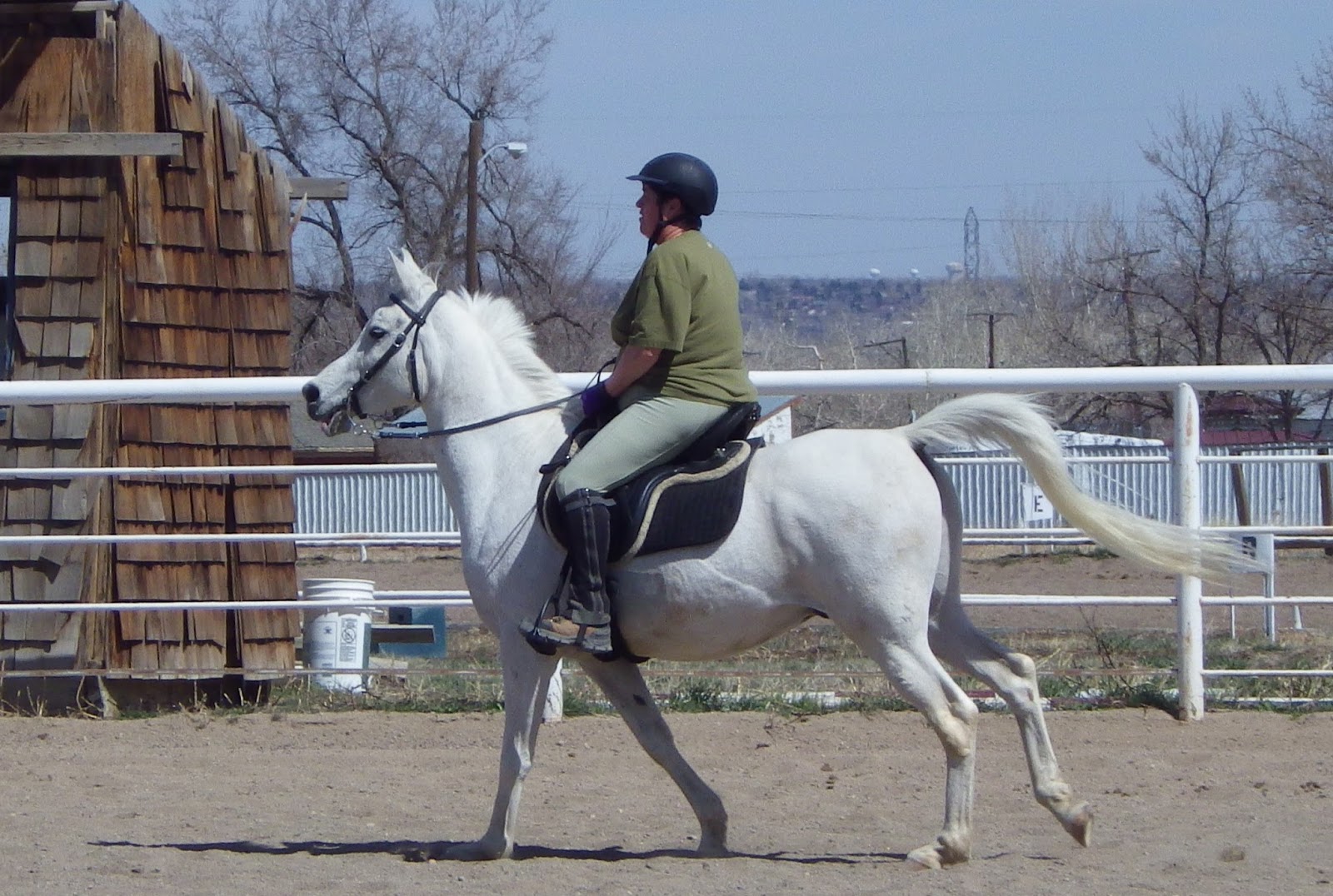 I think we will be even better together when I get the Alta, since it should provide better leg and seat position. 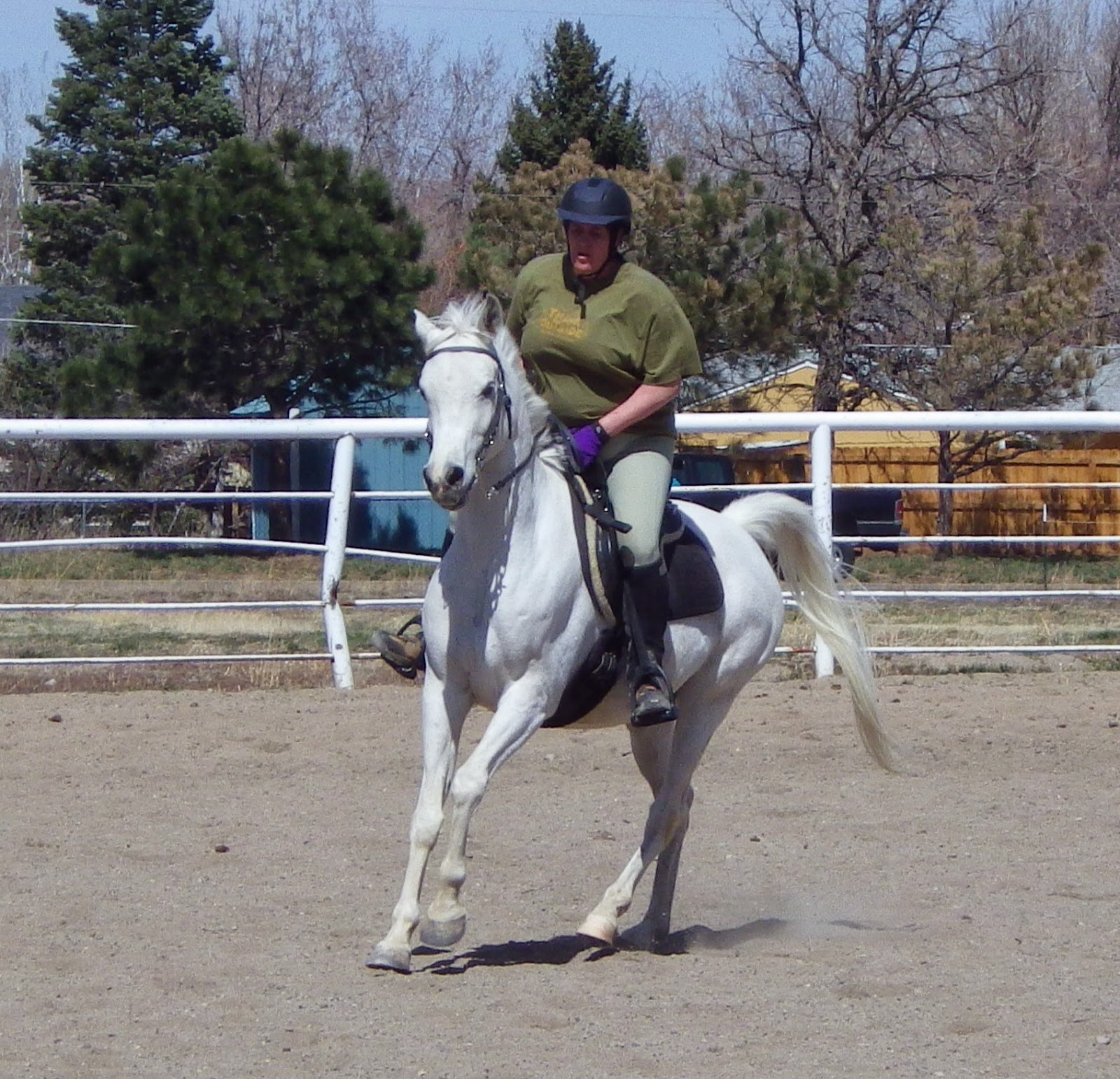 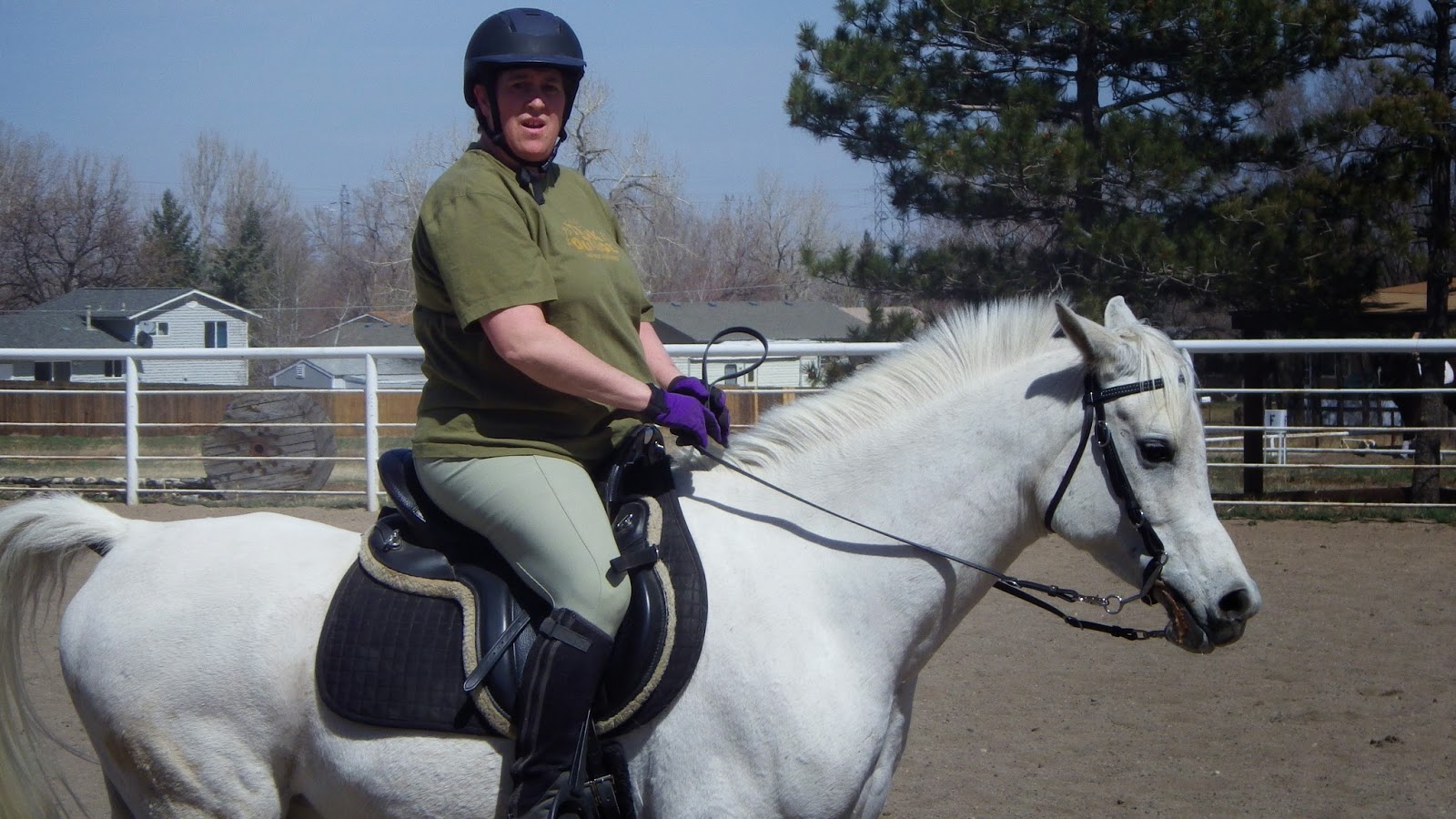 The really funny thing is that there were a couple of reining horses in the arena when we first started and they were doing slide stops. After watching them for a bit, Ashke waited until I said whoa while we were cantering and then he tried to slide stop. 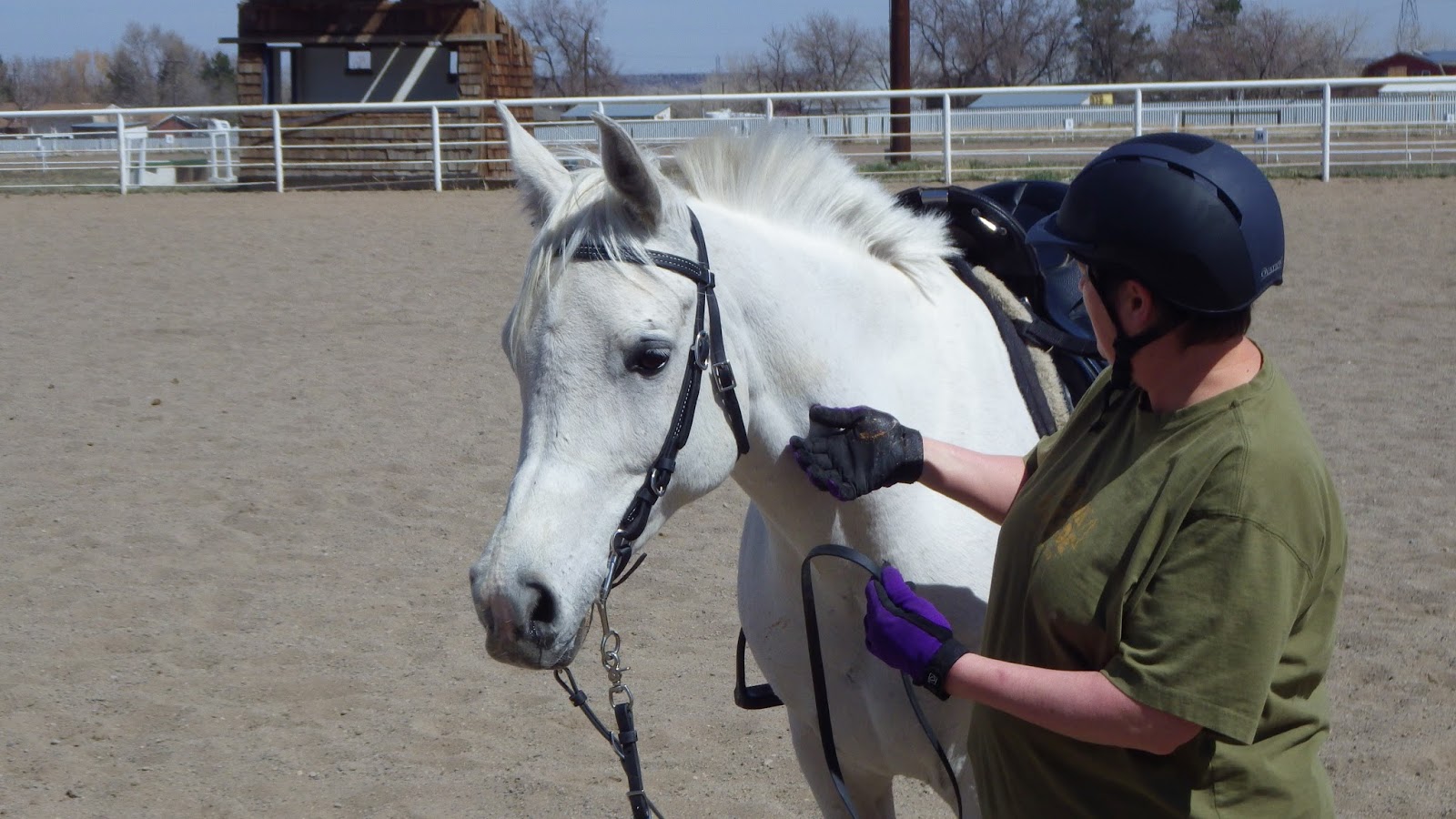 He was very foamy. 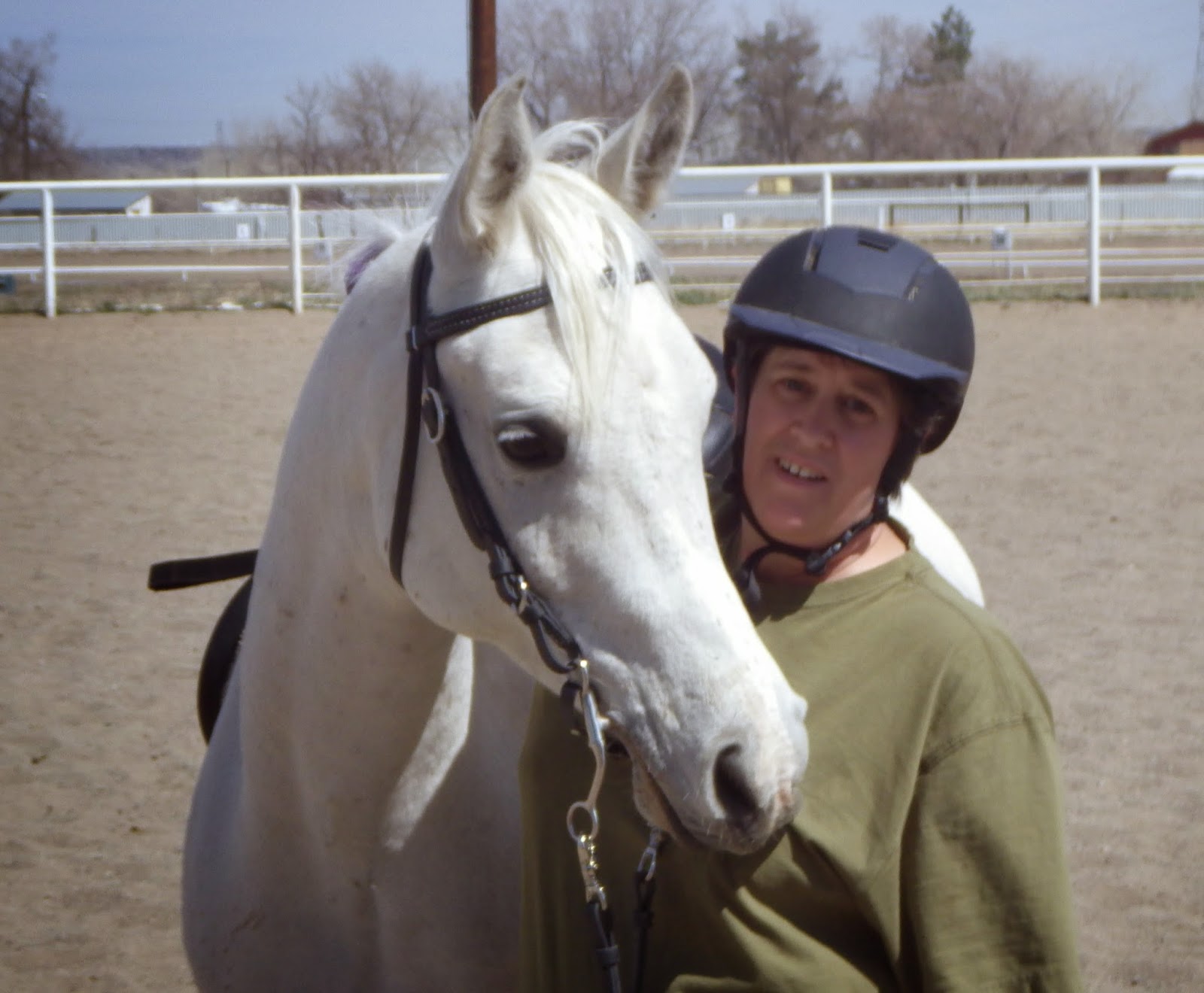 He was so much happier today. 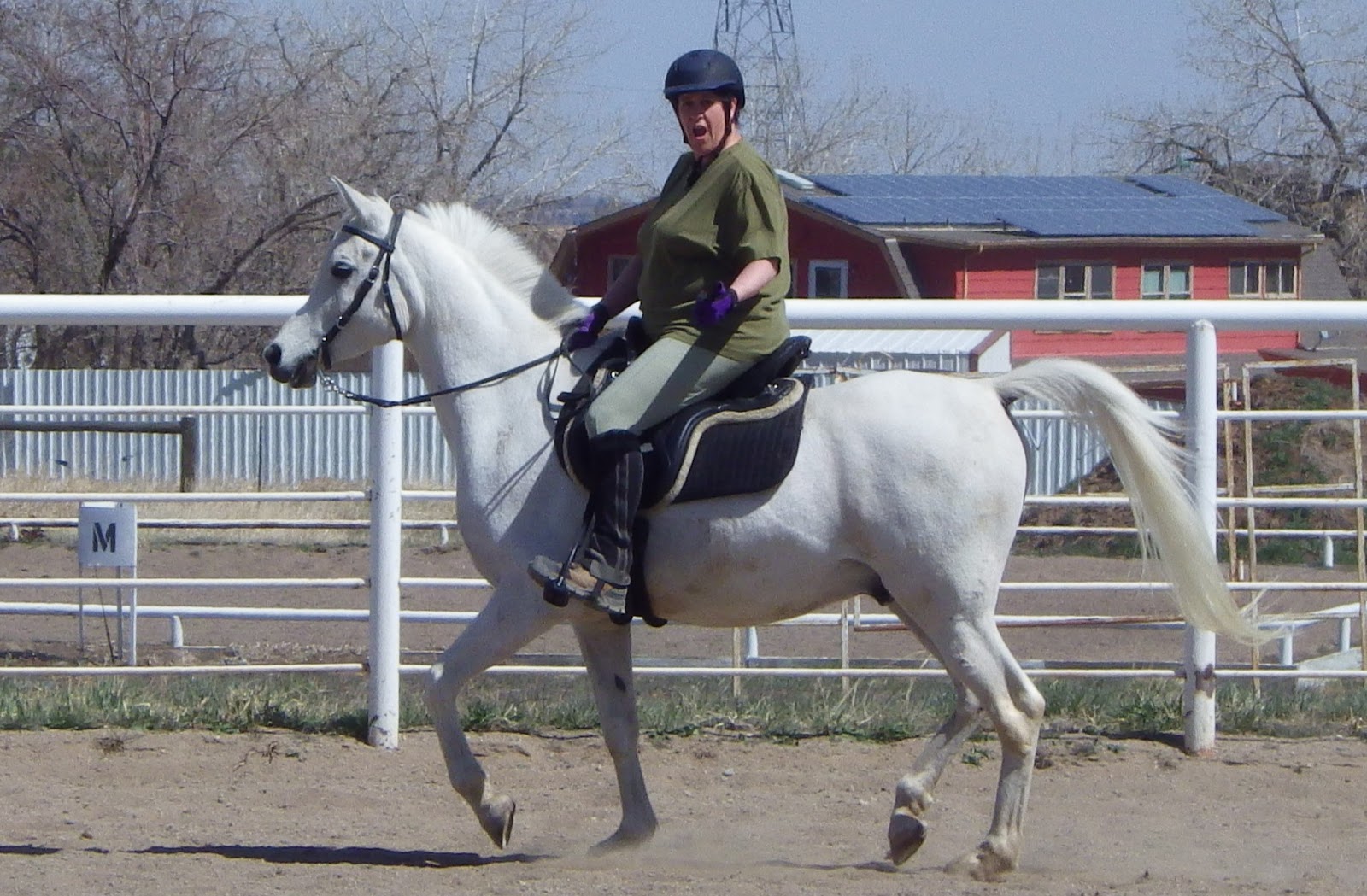 This was where I was happy with his head. He was moving well beneath me with light contact. He wasn't on the forehand, and he felt very responsive under me. 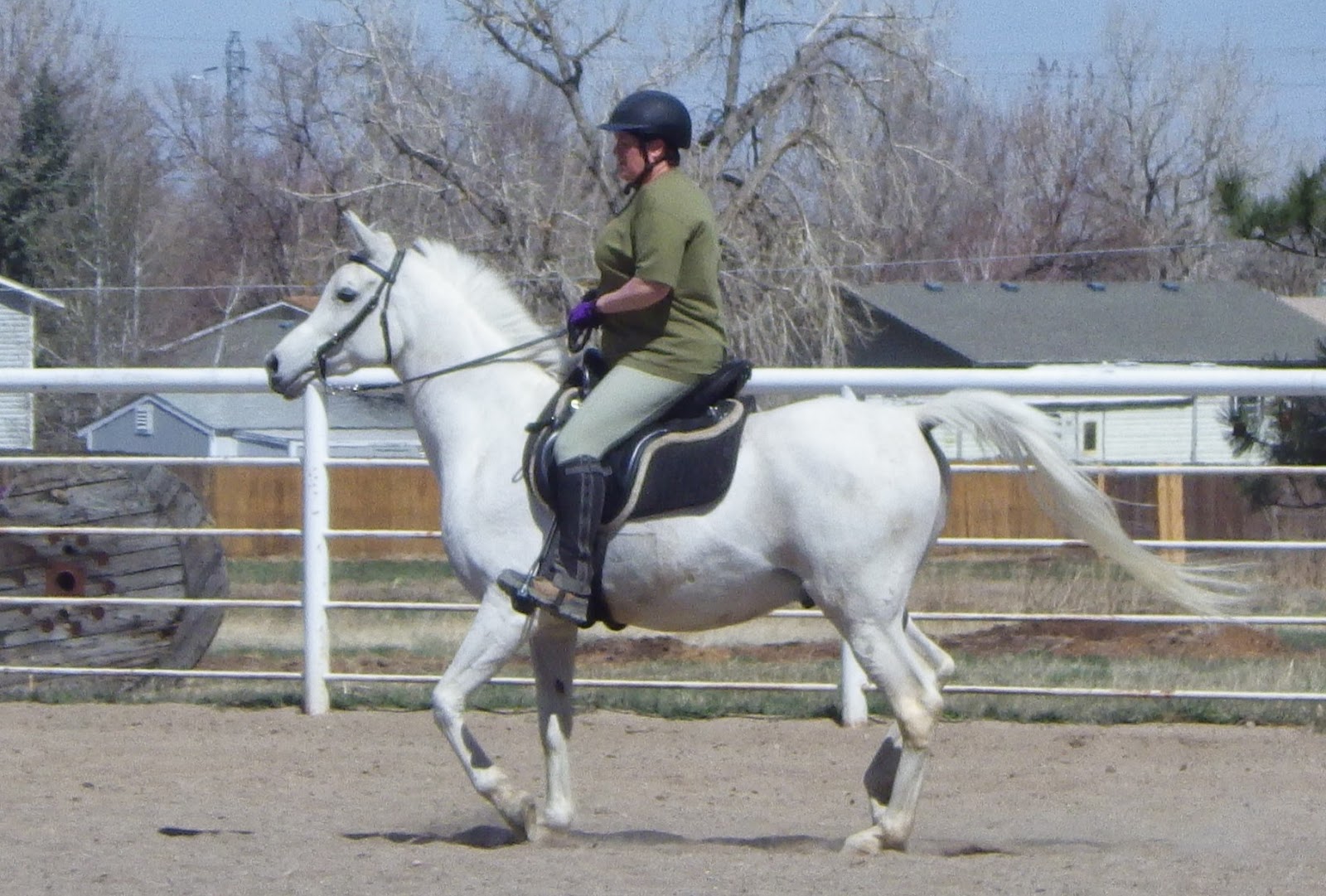 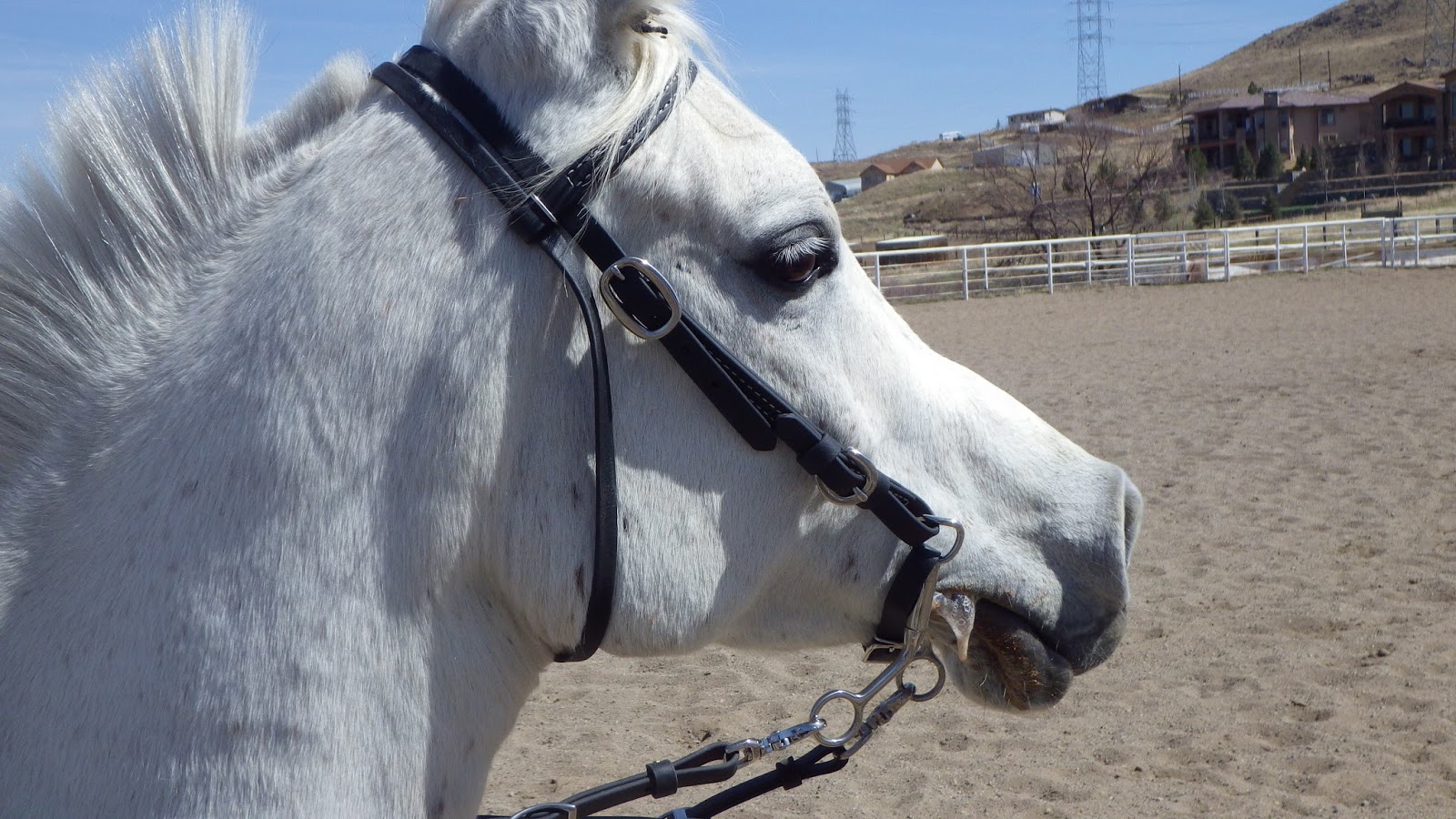 We cantered in both directions for many circuits of the arena. There was one time where we were going to the right and he wanted to rush, but the slightest touch on the reins brought him back to a nice canter. He was a little sweaty when we were done. 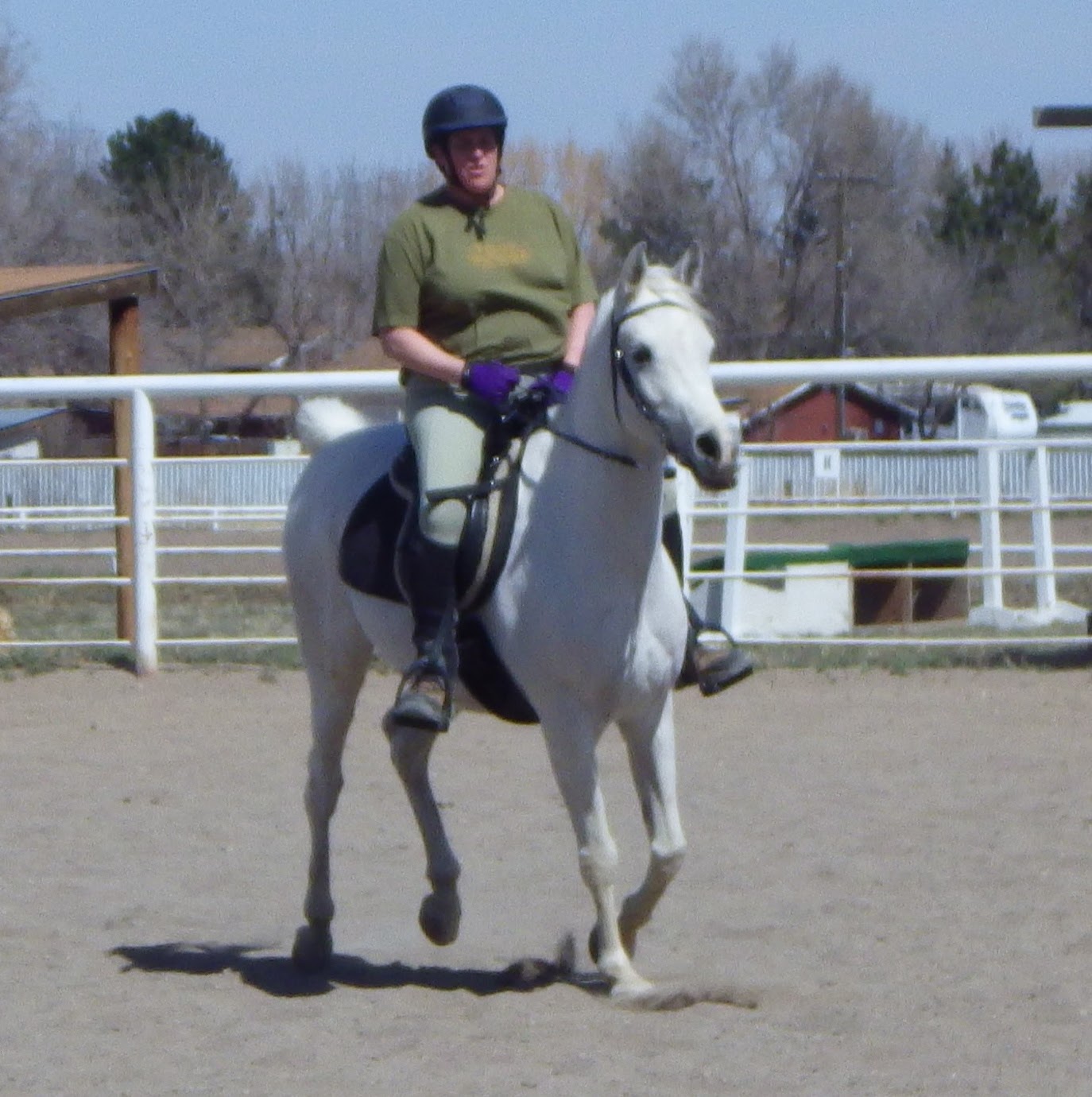 I was very happy when we were done. I can't wait to ride him again tomorrow.

MJ stopped me and asked about the saddle. We started talking about his issues and she suggested a laser treatment to help with his back pain. I went ahead and scheduled a laser treatment to see what the issues are in his back and right hip. Hopefully it will help eliminate any damage I might be doing. I'm wondering if there is any scar tissue or muscle scarring that can be released with the laser. We will see.

J and I also talked to the BM about setting up some obstacles for both de-spooking (parelli stuff like a car wash and tarps and fan cavaletti) and obstacles for Working Equitation. I am going to see about meeting with Rachel and the other trainers to discuss where we can start building them and when.  I'm really excited to be able to practice with the obstacles, plus the BM is talking about doing a series where we end up riding to the top of the Mesa for a picnic lunch on the last day.

I am very pleased with how responsive Ashke was to my requests today to canter at a relaxed, put together pace. We have something we can work with now. And I felt so much lighter with him than I have been in the past few weeks or months. I am satisfied that our time in the indoor arena and lessons with Cassandra has taught us a lot. Since I'm not interested in showing in dressage, except for the dressage test in Working Eq, I find myself looking forward to working through the obstacles with my boy. He will love it because he loves learning new stuff.
Posted by Cricket at 8:20 PM