"Personally, I don't think we should get so focused on training and correctness that that we completely forget about enjoying the ride." -- Mark Rashid 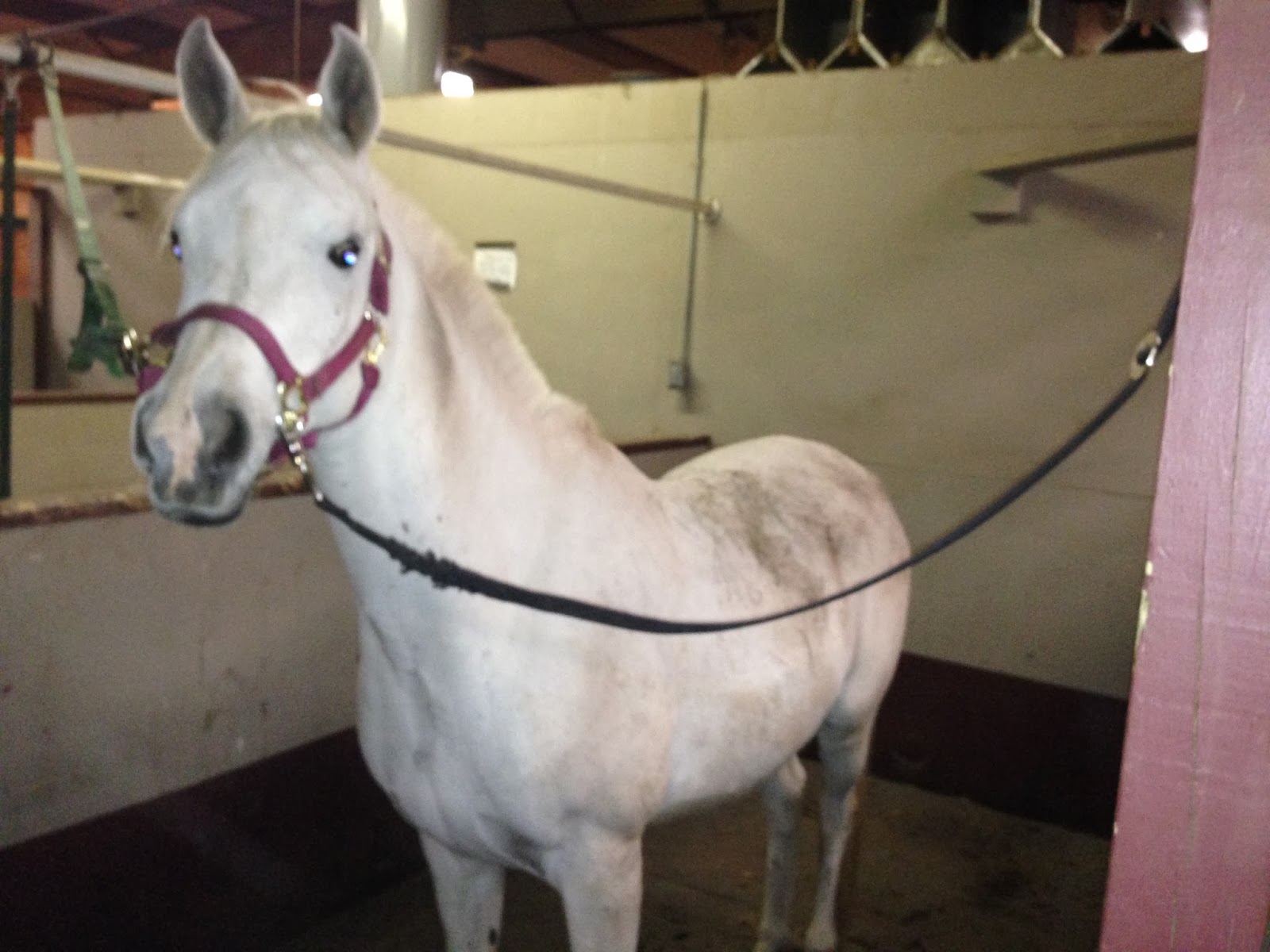 Let's talk about how we as equestrians choose to deal with adversity when it comes to dictating to our horse what it is we want them to do. We get firmer. We use more aids. We sometimes even get angry. We think, "stubborn beast! Why won't you do what I want?"

For me, these times come when I am trying to get Ashke to do something I set out before the ride that we want to do. Last night it was canter sets. Four in each direction. We did walk-trot sets around the figure eight. Then we did trot sets with changes of direction around the figure eight. He was amazing. Then we did circles at the canter to the right. I do the right side first so he's not as tired when we do them. He did very well. He is much more balanced and although he's not collected, he's not stumbling either. To the left was a different story. It didn't help that I was frustrated and upset about life before I got to the barn, because that was a contributing factor in how I reacted to Ashke.

All of a sudden it was as if it were five months ago.

I think it started with me being off balance. I don't really enjoy the Wintec and I am moving in it more than I was moving in the Trekkerland. Yes, it is much closer contact, but what that really means is that Ashke can feel me sliding around on his back. It also is shaped more like a jumping saddle so I feel pushed forward and off balance. On our third canter, I did something that caused Ashke to stiff legged stop and throw his head straight up in the air, completely braced against me.

I flared into rage.

It became a battle.

In his defense, and in retrospect, he was confused and upset because he didn't know what it was I wanted. I became unreasonable and unrelenting in my demand. There was no request for collection or softness, but more rigid demands for performance. It spiraled down from there. Finally, I stopped, got him to drop his head and just sat there. I'm not even sure he was breathing. No, I did not beat him. Nor did I resort to using a dressage whip. I did kick him pretty good with my heels a couple of times and he hit the bit the couple of times, which in retrospect is probably what started our issues. I think I was off balance in the saddle and grabbed for balance on the reins, which popped his mouth and caused him to throw up his head. Once he braced, the next attempt was worse, until it spiraled to the point where I felt I had broken my horse.

Our issues were not caused by me suddenly becoming a horrid rider and beating my horse. I became angry and he knew it. Ashke is so sensitive to my emotions that even if I am not acting angry, he can still tell and he BLAMES himself. He knew I was upset and frustrated and angry when I got to the barn: I got in a disagreement with J on the phone as I was leaving work; work has been so stressful and demanding; the dogs ripped apart a box I had the Trekkerland packed in (that I paid $10 for) and may have damaged the saddle the day before I was to ship it to a new home. (Now I need to get it to Bev to check for damage or to replace items and it will take her four weeks or so to get the items from Prestige if I need them.) I just shouldn't have rode and I knew that when I got to the barn.

Horses are a lot like kids. Or dogs. They want to please you. They don't really understand it when they don't. They always blame themselves for the situation. They look for the right answer and if they can't find it, sometimes they act out.

As I was sitting there I evaluated why I was reacting the way I was with Ashke. Most of the time, being with him is a release from tension and relaxing, soul regenerating. I can usually let go of everything and just enjoy. So, why not last night? Sitting there by myself in the arena I realized I was stressed about my riding because I was feeling pressure about showing.

I think it would be fun to show in Working Equitation, even the dressage part. However, I'm not feeling like it would be fun to show in a dressage show. Showing this season is what N is gearing up for and Cassandra has had us practice a dressage test. It's not that I'm opposed, per say, but I am hesitant. I know somewhere back in the back of my mind is a tiny figure with a long whip and sharp teeth tearing at my self-esteem. Too old. Too out of shape. Too big. Going to look stupid on my horse. All of those thoughts dictated my actions last night. Tried to push Ashke into being perfect so I wouldn't look like a fool.

Why do you ride? I ride because I feel the most alive when I am on him. Why did I start dressage? To give us focus and the ability to full rehab all of Ashke's injuries. To make him strong, so he can carry his old, out of shape and very heavy rider. (Yes, I know age is a mental game, and so is body weight and self-image. It's a game I suck at when I am tired or stressed.) None of my original plans included showing dressage. Sitting there, I let it go. Maybe later in the season I will do a schooling show. But not this first show. Not in two weeks.

Then I gathered my reins and we finished our ride. We did some lateral work, including leg yields along the rail, which he rocked, and some side passing, which he also rocked. (He was facing the mirror and really enjoys watching himself.) Then I asked him for a canter to the left, was not too demanding that he lift with his back, just that he stay balanced around the corner, and then asked verbally for the trot. He came down to the trot without bracing or throwing his head and continued forward at a collected trot. It was perfect to end our session on. I asked him to stop and made a big deal verbally and with rubbing his neck. He was relieved. So was I.

He was not broken, but I was.

Spent my thirty minute drive in tears. Continued to cry at home, feeling disgusted and ashamed. Tired. Stressed. Old. Broken. Had a texted conversation with N, who knew without asking what had happened, because she's been there. We've talked about this before. Sometimes you snap. And then you go on. So, this is me going on rather than giving up. Of facing my behavior straight on instead of hiding from it. Of continuing my relationship with this extraordinary creature, instead of rehoming him. (Yes, it had reached that point at the height of my misery last night.)

Sometimes I think having one person who understands what you are trying to attain with your horse, who has gone through those same struggles from the perspective of the rider, is a necessary part of our journey as equestrians. I'm very thankful for the people in my life that fill that position, some of which I have met through this blog.