﻿
N and I rode on Friday night in the arena and both of us were very pleased with the results. . His right haunch was definitely sore on Friday when I saddled him up, and he let me know by dropping his hip and turning his back so I could rub the muscles over his loin, his haunch and along the hamstring. I gave him a pretty solid massage (10 minutes or so) until he let me know it felt better. I warmed him up slow, walking the indoor arena in both directions four times before asking him to trot. I can tell when the muscles are loose, because he really stretches out and moves at the walk. Ashke is giving more to the bit, and his canter is coming along in both directions. We do need to work on trot-canter transitions, but not until his canter is better. It is still difficult for him to canter to the right, although I do see improvement, and I have to continue to move slowly with him so we don't reinjure his right haunch. Once we were warm, we did some trotting and then N and I took turns with our canters in both directions. I started working Ashke on figure eights with a lead change between directions (we slow to the trot and then pick up the other lead). This is how I know we need to work on trot-canter transitions, because he doesn't always want to slow down. I can ride four or five circles at the canter before my body needs a break, then it was N's turn. By the time we were done both horses were in a light sweat so we walked the arena and talked for about ten minutes to let them cool down.
Sunday was our next day to ride. We thought about exploring a new trail, since both horses are so familiar with where we ride now that they are getting somewhat anticipatory in their behavior along the route. However, the thought of being able to let them play in the water at Tucker Lake was too good to pass up. The temps were right about 90 (we've been really spoiled with temps not getting that high for most of the summer) and the thought of playing in the water sounded too good.
Both horses were really up, but not acting too badly, for the most part. Cali did have a couple of moments where she bucked instead of cantering, which N rode easily. Ashke was very forward and moving very well. I only booted his front feet, since I think the hind feet are a little loose and have a tendency to make him feel unsteady. Michelle said his hind feet were rock solid and in great shape. That seemed to really work for us this ride. Unless we move onto the mesa or somewhere equally rocky, I think that will be our norm going forward.
I also got a new pair of reins that are soft cotton/poly mix, roping style, but a little longer than the black nylon reins I've been using, plus they are round, not flat, so they slide through the martingale very nicely. I have a pair that are made the same way, only the rope is twice the thickness, and they are super heavy - dragging on his mouth, even when I don't have pressure on the bit. I wanted something thinner and lighter but that worked the same way, especially the part where they don't hang up on my martingale (sometimes the boy goes super behind vertical and hangs up the buckle on the black reins). I am happy to say that they were perfect, perfect length, perfect weight, and no hang ups. They look like this, in case you wondered. 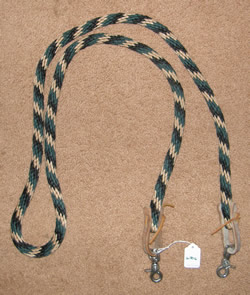 ﻿
By the time we got to the Lake, we were all pretty warm. We stripped gear and let the horses out on long lead lines. They seemed to love it. 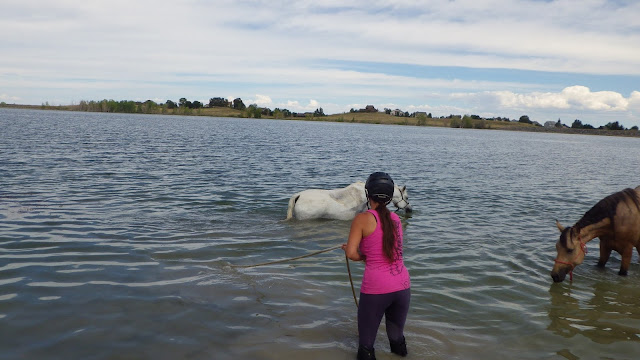 I grabbed the camera but missed both horses laying down. At one point not only did Ashke lay down in water deep enough to cover his back and most of his neck, but then he tried to roll, which effectively dunked his head under water. He came back up snorting and confused, splashed the water with his nose and tried again. There was no part of him left unwetted. Silly boy. 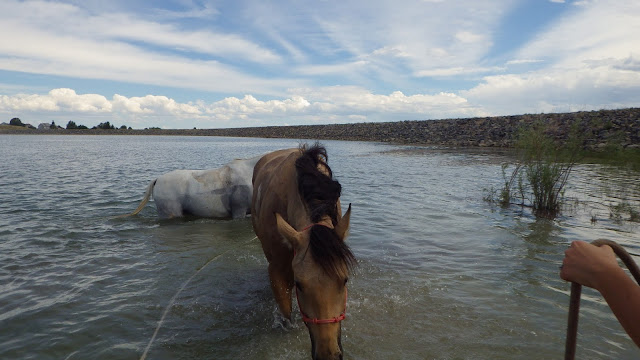 Cali laid down three times, but in shallower water. She, however, didn't attempt to roll. 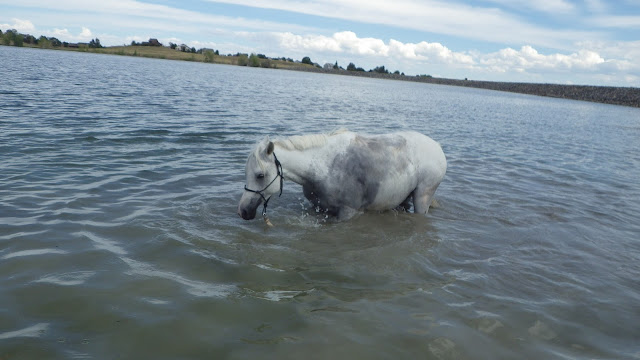 This picture above is about the depth of the water when he went down. I was afraid he was going to drown himself, but I guess he is smarter than that. 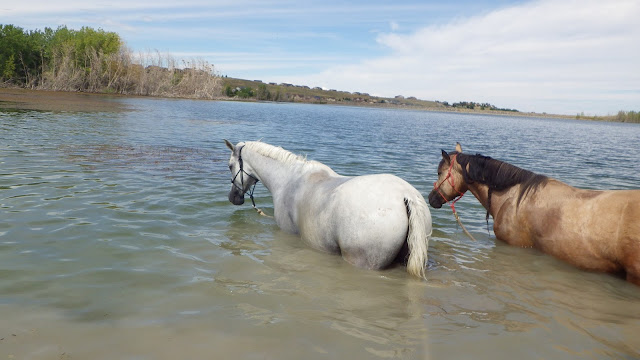 They were both in the water for twenty minutes or so. N and I were out in the water up to our thighs. We've decided that next time we are bringing a lunch, bathing trunks and pulling both our shoes and the horses boots. (I need to find a set of saddle bags that are going to work with my saddle to carry all this stuff. At least I have attachment points, N only has the two pommel points.) 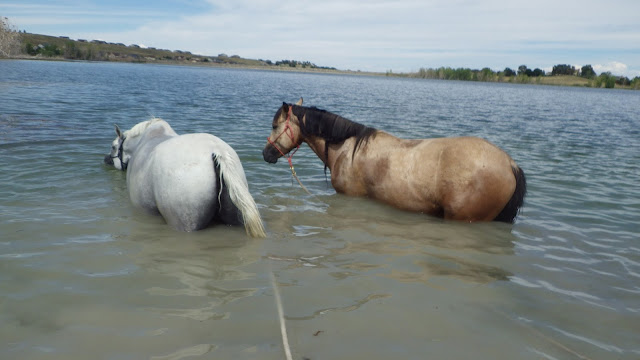 Eventually they tired of the water and moved to dry land and grass. We took time to wring out our socks, and drain our boots before saddling up again. I don't think either of us will ever be willing to ride deep water with the saddles on, since they have both shown willing to roll in the water. 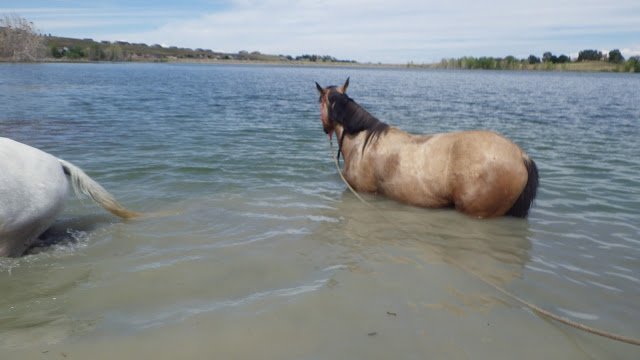 The rest of the ride went pretty quickly, although we had issues with Cali's easyboots. She keep slipping them off when we canter. The gators on the back boots are completely torn up and N is now thinking about trying the backcountry trail gators. Or possibly a half size smaller glove. I think it would also help if we stopped allowing them to go in the lake without taking the boots off. I'm sure the water is causing them to stretch.
If you look at the map below, we cantered pretty much continuously from the top part of Tucker Lake where we turned West to the area above the switchback just before the 5 mile mark. That was a wonderful stretch and Ashke loved it. We did have one moment where I was on one side of the sidewalk, Cali was on the verge on the other side of the sidewalk and there was a bike rider on the sidewalk in front of us. Ashke thought it was a race and I had zero control. I was trying to stop him, but there was no stopping until Cali eased down and then Ashke slowed too. I swear he thinks he's a race horse.
I got a new phone and downloaded the app while tightening my girth so my settings were FUBAR'd, but I didn't want to not track the ride. So, here you go.﻿ 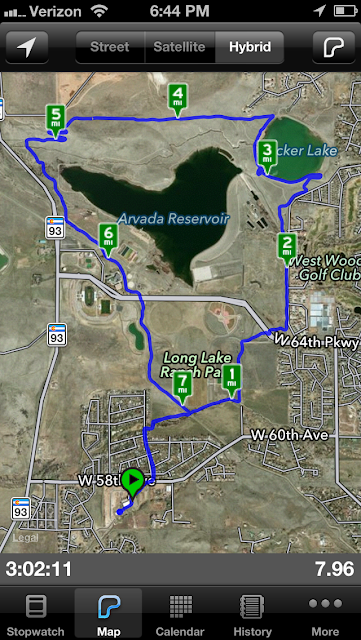 The last canter of the day, which is an open field right before we go into the neighborhood, is always exciting. Ashke seems to think he needs to jump over random patches of alfalfa. The canter is actually more like a run and the intermident jumping adds a bit of spice to the dead ass run he prefers. I really need to work on his stop. Overall, it was a great ride.﻿
﻿ 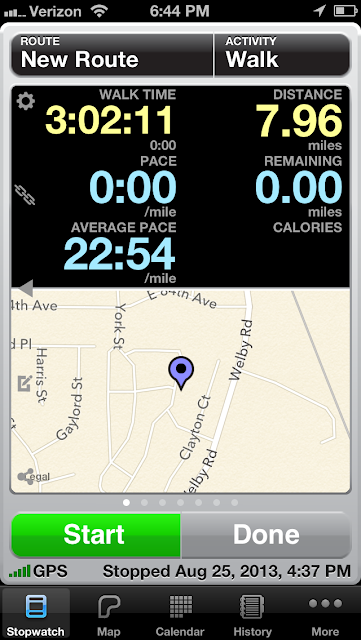