I went to the barn Tuesday night to ride by myself, figuring we would work in the outdoor arena on cantering. When I got to the barn, I found this: 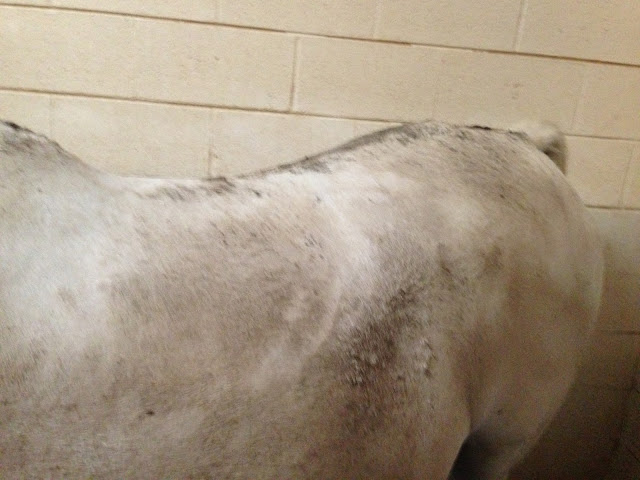 Ashke does turn out with Cali three times a week and it rained late Sunday night, so the turn out pasture was hock deep in mud, which he loves! 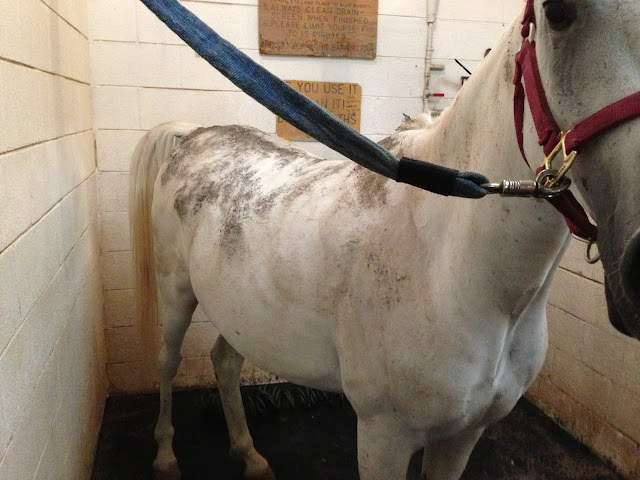 I didn't even try to brush him off. I walked him into the wash stall and turned on the hose. It took a good fifteen minutes to wash the mud off him. No soap or shampoo, just a cold rinse.

The worse part was his mane. 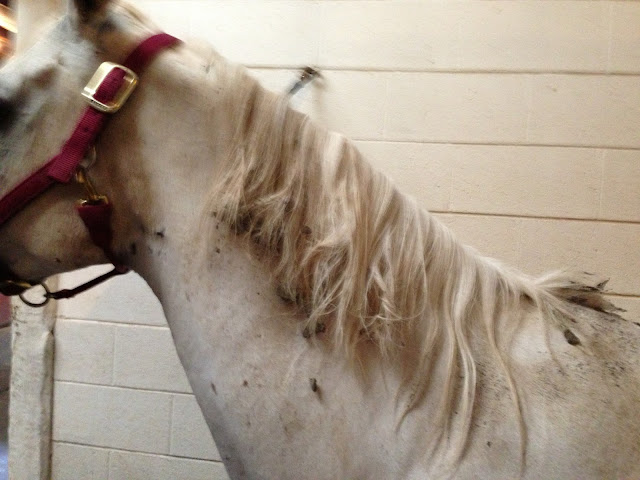 He had chunks of mud - concrete really - balled in the hair of his mane. As they washed out, mind you I just used water, no comb or fingers even, huge wads of hair came out too. He had gotten the mud balled up and then rubbed on the fence or wall of his stall. He had torn out handfuls of mane. The hair he hadn't torn out was frizzy and broken off. Think dreadlocks. His mane was thin to begin with and we have been struggling to get any good growth. I did what any good mom would do with a child who had gum in their hair - I cut it short. Left about three inches. Not short enough for his mane to stand up. Looks like a roping horse's cut.

About the time I was weeping over cut hair, I got a call about a Supersac I had found on Craigslist. Quickly I scraped Ashke down and turned him back into his stall with a handful of carrots and apples. I raced home to grab the truck, then drove to meet the woman selling the oversized bean bag. T wanted to redo his room and instead of a sofa to sit on and game from, we got him this: 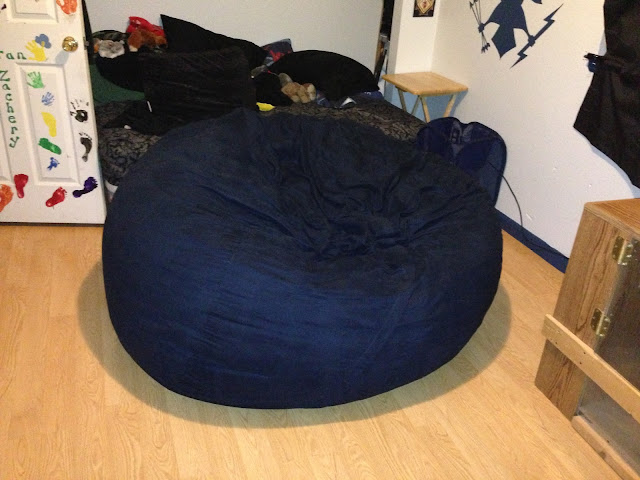 It is the size of a queen sized bed and is big enough for him to sleep on. He and two friends can sit side by side, if they wanted. It's still pretty surreal to me that we effectively cleaned all of the toys and trappings of childhood from his bedroom. He wants a larger TV and small refrigerator next. His own "crib". It's in perfect condition and an absolute steal at $60.

So, instead of riding on Tuesday, I met N at the barn at 6:40 on Weds. Thankfully, Ashke was still clean, so we tacked up and went to the outdoor arena.

I am so pleased that Ashke has finally found his trot. I need to get J out to video tape it so I can see what he looks like. He is traveling collected for a much longer period of time each time we work at the trot. The running martingale has helped immensely at getting him into a frame and we are working at extending his stride while still using his back and butt.

His canter was pretty smooth to the left and N said we looked really good. I am still to much in his face at the canter, which is a symptom of my feeling a lack of control, but even when I relaxed my pressure on his mouth, he didn't race forward. We managed seven or so circuits of half the arena (N and I were working on opposite ends) before we turned the other direction.

Right is so much harder for me to ride. He is rougher and I am less balanced, which I know is contributing to making it harder for Ashke. We tried hard though. We managed six circuits before I was completely out of breath, my side hurt and I was soaked with sweat. But, Ashke found a rhythm and some balance before we stopped. We started out on the wrong lead, but I brought him down and asked him for the correct one, which he did, at least the front lead was. It is more difficult for him to bend to the inside at a canter, and it felt like he was cross cantering for the first couple of turns, but then he switched his back lead and although it was still rough, it was better, smoother, more balanced.

I feel like we made some progress last night. Going back out tonight to ride with N in the indoor (riding later than normal) and working on that canter again.
Posted by Cricket at 7:16 AM