I have been MIA for the past week, mostly because I have been doing this: 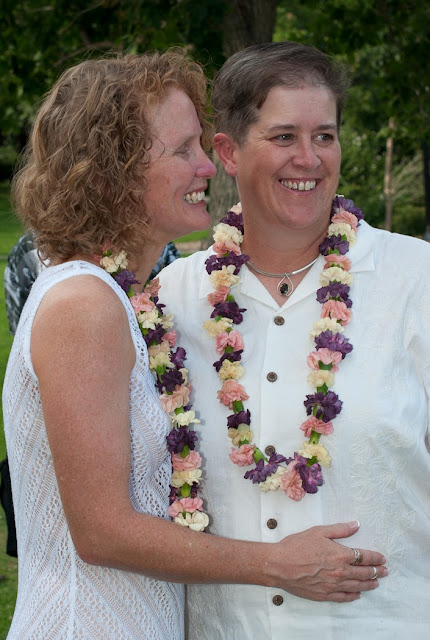 ﻿
Colorado finally passed a Civil Union bill that allowed J and I to be "married" with all the legal rights that entails, on Saturday past. It was a simple, but significant moment in our 17 year relationship. We had the reception afterwards at the barn and through hard work and a lot of elbow grease, we managed to make that dirty, dated clubhouse magical. The reception was small, just family and our really good friends. T was pretty happy to have his parents married.

Sunday, I met N at the barn early and we saddled up. We had talked on Saturday about doing the Mesa, since we hadn't been up there in weeks, and even though we didn't talk about it, I wanted to get N and Cali to the top. The issue isn't Cali's fitness, but rather N's phobia of heights.

Phobias are not fun, mostly because reason doesn't work on fear like that - I know because I have the same type of fear around dentists. Which is really ironic when you think about the fact that N is a dental hygenist.

We did it though. The horses did great, although the temps were higher than we are used to - Colorado finally remembered it was August and we had a day in the 90's. We opted out of letting them run before riding them up, and when Cali started to act reluctant, we cantered up the first quarter mile of the trail, which took the edge off. They were pretty sweaty after making the 1000 foot straight to the top climb. We gave them three rest moments going up, but once up they did great. We rode for a bit up on the top, then headed back down. Our only issue was a fail on Cali's FL easyboot. Somehow she managed to get it off her hoof without undoing the gator. I got off and fixed it (my saddle is easier to get back into) and made sure the gator was much tighter than before. We didn't have any other issues, although N is going to get the security straps for the front of her boots.

It was Cali's first time down from the top and it was both steep and a little slidy. Both of the horses did great, however, and we got down in good time. Ashke has gotten very good about getting his butt up under him and going slow, with little prompting. He now understands the importance of taking his time and I bet we could go down the trail we almost died on and not have any issues.

I estimate we rode about 5.5 miles. Unfortunately, my phone picked this weekend to die (thinking manufacture's defect) and I wasn't able to track the ride on my app. N and I plan to ride up there again, and maybe I can get her to come back down the back side with us, even if we have to hand walk part of it. We will see. Just getting to the top was a huge step for her and it definitely gives us another place to ride.
Posted by Cricket at 10:15 AM