Today was a wonderfully great day!

The stable where I keep Ashke has a bunch of people who arena ride. Many of them belong to horse clubs and ride mostly to show. They spend a lot of time riding in circles in the arena to school their horses to perform well in the shows.

As I have said in the past, that kind of riding has its place when you are schooling a horse, but it isn't how I want to spend a ton of time riding. Ashke has settled so much that my confidence in him has really grown. We move between walk, trot and canter with ease and Ashke just does what he is asked, rather than fighting with me about it. Two weeks ago, Nicole and I rode out on a trail ride close to the stable. Nicole had so much fun, she organized another ride this weekend.

I got to the stable about 12:15. I was talking with Susan and Tom, both of whom normally ride in the arena but are interested in riding with us the next time we go out, when Nicole arrived. Abby was just a few minutes behind her. Abby is leasing Nicole's horse, Rhythm. We groomed and saddled and then moved out to the arena. I worked Ashke for maybe ten minutes in the round pen.


It didn't take a lot of time to get him warmed up. J was home with T and so I had to be my own videographer today. Ashke moved really well.


Nice little canter, he has. Sorry about the camera moving, but it is hard to watch the image and keep him moving.

After the warm up, we moved into the big arena. He was so good. 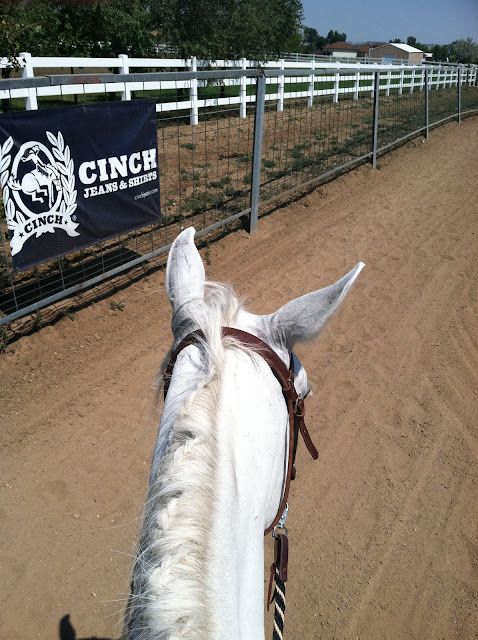 We did this for about 40 minutes or so. At the walk and trot and canter. No issues. No problems. Just a nice sweet ride. 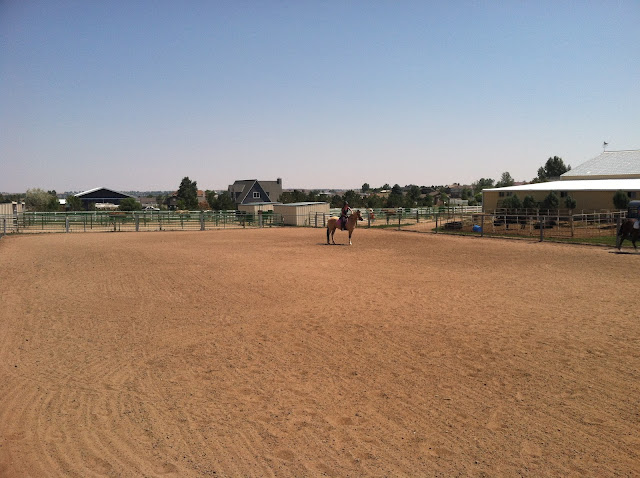 Nicole on Callie. Callie is a Paint/Friesan and is only 3 and a half. Nicole is bringing her along slow and sweet and Callie is doing great. Ashke likes to ride with her. Abby is exiting the screen on the right. She is riding Rhythm who is a Dutch warmblood and has been trained by Nicole. Nicole is trying to find her a new home and she offered her to Abby. Abby is leasing her for a month to see if she and her mom can afford her. Abby is 16 and absolutely horse crazy. I can relate. She rode really well today and Rhythm went well for her.

About the time we were almost ready to leave, Susan arrived in the big arena with her QH, Ace. He is also five and she's been working him about a year.  She has him very well trained in many ways, but is just starting to work with him on obstacles. (I'm thinking she needs to work him with some of the flapping things we can set up in the arena just to help both of them gain some confidence.) She had never ridden him outside of the arenas and was scared to ride across the driveway by the wash rack.

I have to say that Ace was fine. He reacted the same way any horse would who had never been outside an arena might react. He was hesitant about some of the things that we saw and he was a little tense, mainly because Susan was completely freaked out by everything. She was projecting her fear and that made Ace tense up. Nicole kept telling Susan to breathe, reminding her that nothing had happened. Susan was able to release some of her fear by talking about how freaked out she was. I think that by the end of the ride, she had settled a little bit. I swear we should have given Susan a drink before we left camp.

All four horses did great. There were no major freak outs on the part of any of the horses, but Susan hyperventilated at everything. The flapping white plastic was unfamiliar enough to warrant a look and was the only time Ace really protested moving forward. Susan said he steadied when she applied pressure with her leg on the side where he was trying to sidle away and with patience she was able to get him to go past the plastic. (That is one of the obstacles that can be worked with in the arena.) The small furball barking and flying along the fence was startling, especially since I think the horses were looking for a slightly larger animal. I think Ashke thought it was related to the rabbits he seems terrified of around the barn. We went down a slight hill and then up the far side. We even trotted along the path at a couple of points. Finally, there was a swinging metal gate that none of the horses had even looked at twice when we went out, that everyone looked at going home. Callie had the most issue with it. It was swinging just a little in the wind. Very Scary!

Everyone made it home safely. Susan said afterwards that she feels so much better knowing Ace trusts her and that he didn't act up at all. I thought Ashke did wonderful and Callie and Rhythm were both awesome as well.

One of the things of note that happened today was meeting Cynthia Richardson. Cynthia has two arabs at the barn - Vinnie and Rex. Two of my favorites. And she's ridden the Tevis (said Teh-vis, not Tee-vis, in case you were wondering). And she is also the director of the Colorado Arabian Club. I talked to her about endurance - she wrote the manual for AERC - and about getting Ashke registered. She was really nice. She also gave me a game plan as far as getting him ready for endurance. She told me to go slow and to measure his cannon bones (circumference) so I could tell how much bone he put on. And she told me not to make the Tevis my first endurance ride (which is what she did). All good advice. I thought she was really nice.

After the ride, I unsaddled and then rinsed Ashke off. He was drying in the sun and grazing when Marit arrived. She asked me if Ashke could be turned out with Stoli and then with Lacey. I said sure as long as she could put him away, since I really didn't want to wait for two hours. She said she would. She is also going to turn him out on Tues and Weds with Lacey (or maybe Stoli. Or maybe both.) So my poor, lonely boy now gets to share pasture time with two pretty young things. 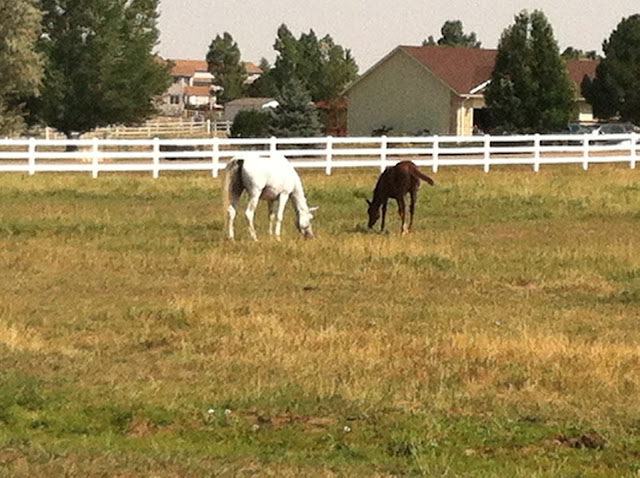