I wanted to start with the Jammies by Toklat I ordered online and received Wednesday. I would have bought them from Murdocks, but Murdocks only carries QH and TB sized stuff. My Ashke is more of a cob or pony sized horse, especially his refined head, and Murdock's has nothing that fits. Neither does Brighton Feed. So, online ordering it is. I like the color. It's almost the same color as the sheet. Chris is going to give me her sheet from Joey (Leopard Appy she had to put down a couple of months ago) and see if it fits Ashke any better than the one I currently have. At least the Jammies kept the sheet from rubbing any more hair off. I took the picture after I had started to take them off, while Ashke was trying to get out of his stall. Booger. 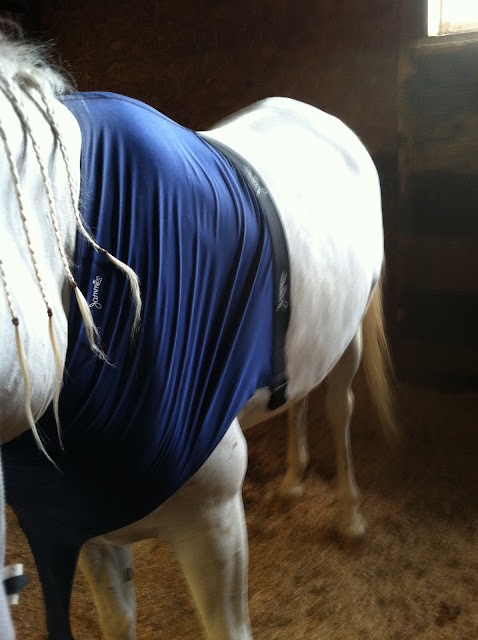 Today, Thursday, was farrier time. Ashke has started favoring his left front again and I thought maybe it was time for a trim. This is his front left foot. Do you see the big groove? That is the growth line that indicates when we moved him into the stable. It will have taken 8 to 10 months for his feet to entirely grow out, by the time we have reached past that line. Dan says the left front foot just grows differently than the other four - it splays out to the sides and the toe is shorter. ﻿ 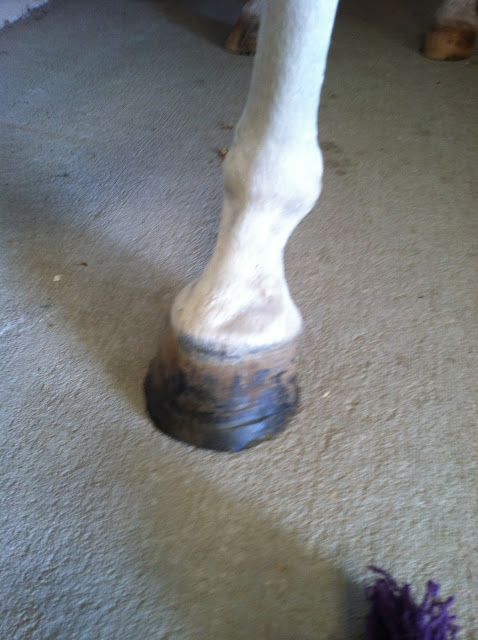 I think the toe is shorter because the silly bugger paws in his stall and wears the toe down. The hoof below is the primary reason I had Dan come out. The sole and the hoof wall are inversed (the sole should be up off the ground and the hoof wall should be absorbing the impact.) Sorry, I didn't clean his feet first, but I was in dress clothes because I was on my lunch break from work. This foot is also almost entirely black, which makes it harder and more brittle, with only a bit of white. It had chipped up from the riding we have been doing.
Dan said, after looking at his feet, that he couldn't do much other than shape them up, because they were too short, especially in the toe. (His heels on his left don't grow as fast as the hoof on the right). After discussing the things I am feeling when riding him and our options, I agreed that we needed to put shoes on the front again. The shoes will keep him from wearing down the toes, keep the sole off the ground and help protect this foot from chipping.
As Dan started paring away the sole of the hoof to prepare to put the shoes on, I noticed a bright red line between the hoof wall and the sole. I have done some research and have been validated in my earlier prediction of the pre-condition for developing laminitis. It was this post: http://theeashke.blogspot.com/2012/06/talk-me-off-ledge.html
The red line between the wall and the sole is indicative of laminitis. Dan thinks it was bruising from the coffin bone when his toes were long and he was on the hardpacked clay and rock in Texas. Since this is the last of the old hoof, and we know exactly where the change in diet and exercise and care began, we can predict that the issue should disappear in the next couple of trims. This red line was present on both front feet, but not the back ones, and it was worse in the left front versus the right front. I did not see the spreading of the white line (but I also didn't know to look, which I will be sure to do next time), which indicates tearing of the laminae. I am hopeful it was just from his feet being long and the malnutrition and the hard packed dirt he was existing on and not a long-term, chronic condition. Dan has done a good job of trimming the foot to improve his breakover (contributing factor in laminitis) and Ashke is getting zero grain, which has the quick sugar that aggravates this condition. ﻿ 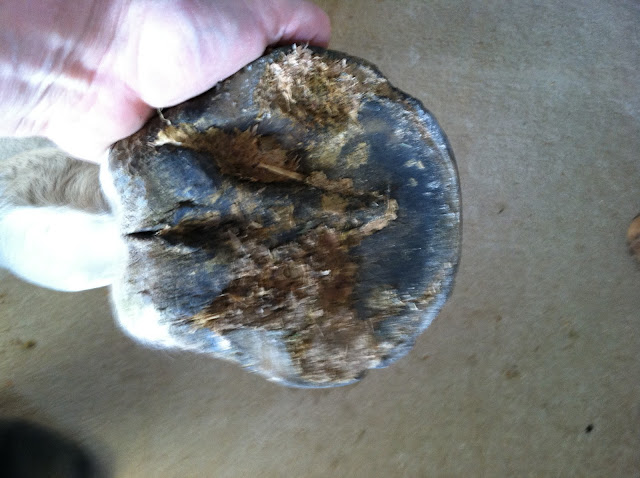 I also discovered when searching for information on the interwebs (how wonderful is that?) that some Egyptian Arabians are prone to club feet, but in looking at the images provided, I am happy to say I don't believe this to be an issue for Ashke (Like I need something else to worry about.) I have also discovered that "club foot" is not a proper term - rather stumpy hoof or bear hoof is the proper veternarian term to use.
Here is the back left. It is much more of an up and down foot. The hoof wall is in line with the pastern and the angle is good (although this is a horrible position for the camera in order for you to see it that way.)﻿ 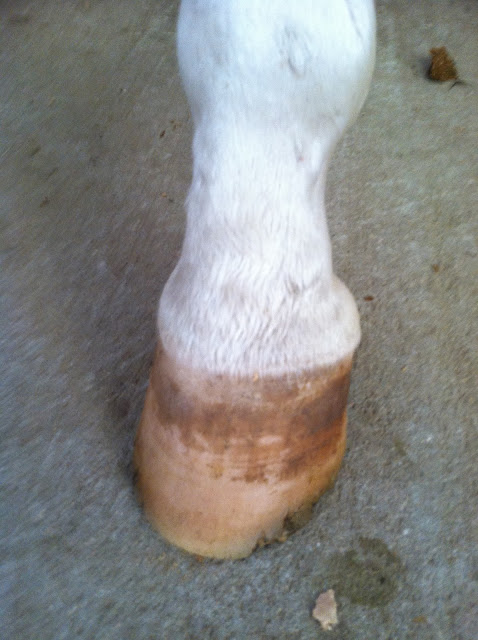 This is the bottom of the back left hoof. You can see the difference in the sole and hoof wall. Ashke obviously does not paw with this hoof.﻿ 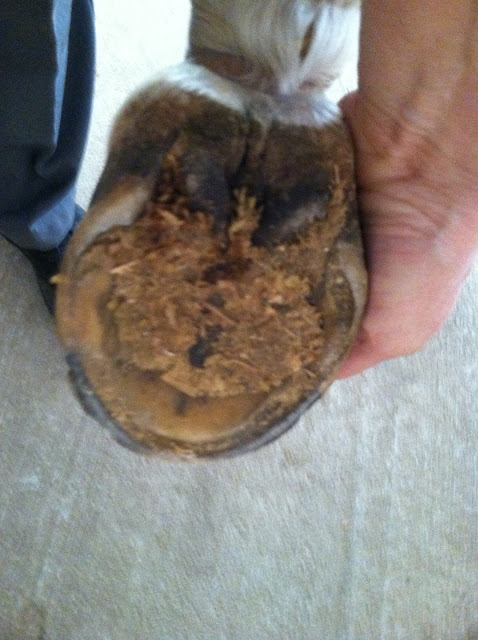 He was so excited to see the farrier. Can't you tell from his attitude in the crossties? And he also knew I had peppermints in my front pocket and hadn't given him one yet.﻿ 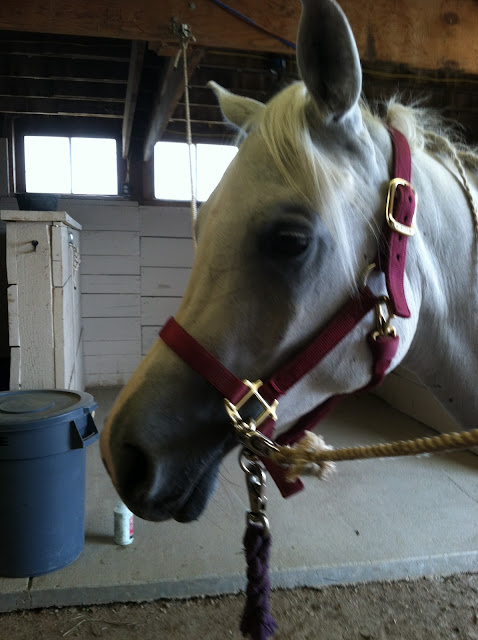 Rasping on the front right foot. The red line on this foot was much smaller and not directly over the toe. It was more broken up and to the side of the front of the hoof. This hoof is a combination of both black and white hoof.﻿
﻿ 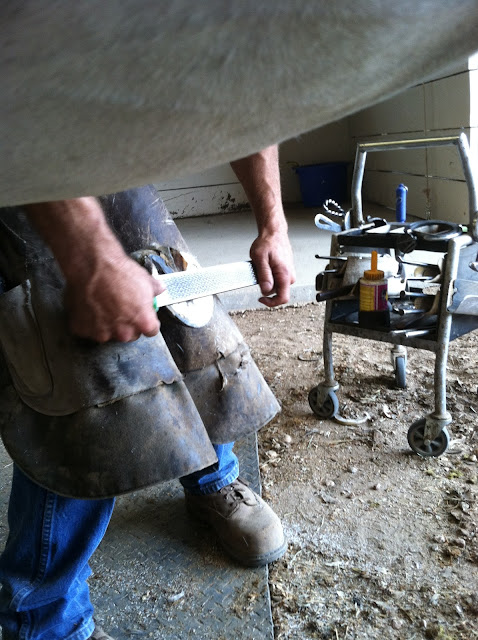 Dan shaping the horse shoe after heating it in his little forge. Pretty cool stuff. 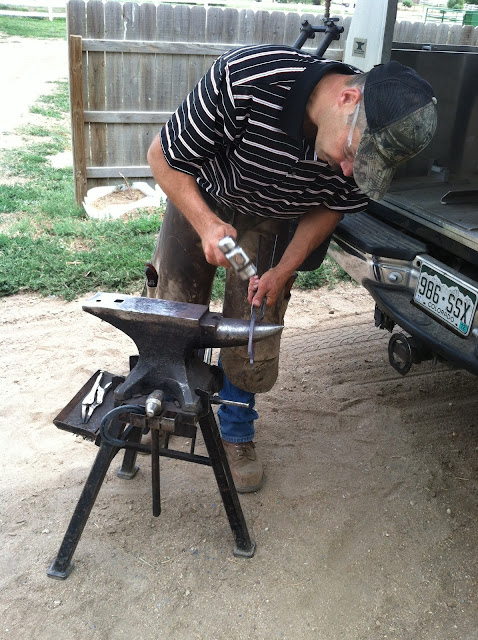 Do you notice the vice grips? That's cuz the shoe is still hot. I guess some farriers do hot fitting, where they use the shoe to scorch the bottom of the horse's hoof to get a decent seal between the shoe and the hoof. Smells awful and I don't understand why you would want to shoe that way, although the interwebs say most farriers use hot fitting to check the fit of the shoe to the hoof, and then rasp away the scorch marks. The farrier I watched do it did not do the rasping and I was told the hot fitting was to better the fit. Hmmmm . . . . 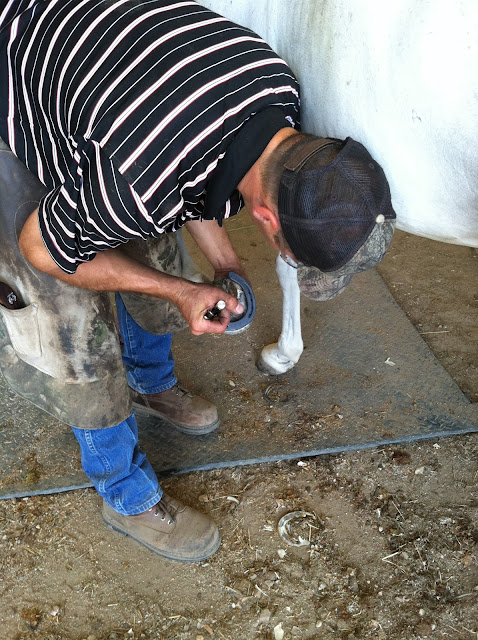 Ashke's attitude with the shoes being fitted on and a definite lack of enough peppermints. I do have to say that he got lippy standing there and managed to snag my work shirt over the right breast, so I got to go back to work with a large dark green mouth stain in a very conspicious place. I was not happy.

On a side note, do you see his nice pectoral muscle development in this picture? 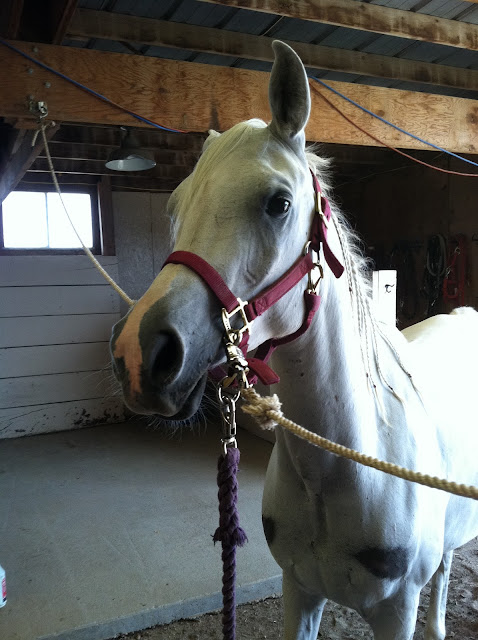 ﻿
﻿
Dan fitted the shoe and then did some shaping before nailing it on. 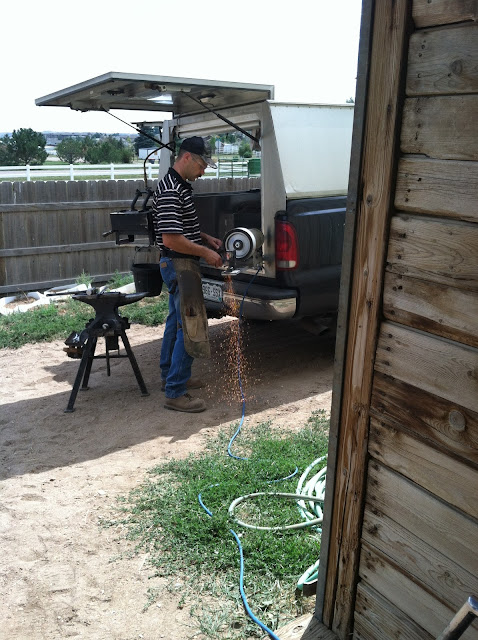 I was happy with the results. Although, I am not so happy with the focus ability on my iPhone camera. Looking at that picture makes me feel like everything is in focus but his hoof. Damnit! 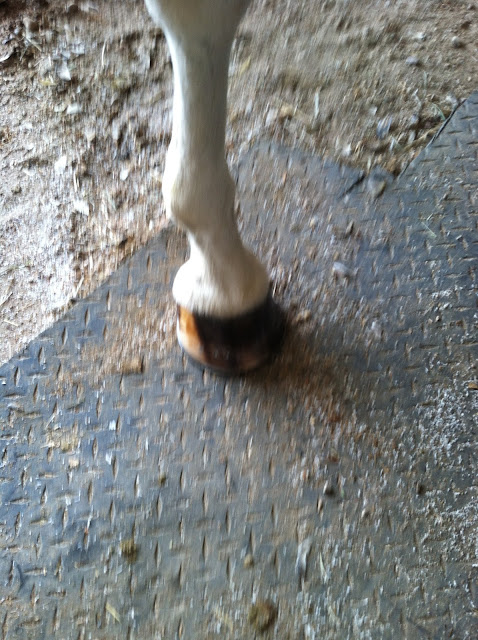 Dan set the nails, pinched them into the groove in the hoof he made under each nail and pinched them down. Then he buffed the hoof and put on some hoof flex. He said that overall, Ashke's feet are getting progressively better. He did not seem unduly concerned with the red line and seemed to think it would work itself out over time. It's funny, because I thought Ashke's feet and legs looked the best when we went to Texas the first time, but that's because I had no idea how bad they had been before. 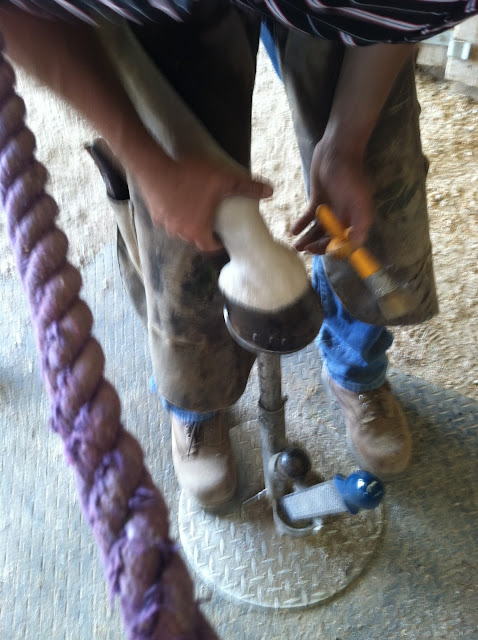 Last night we went out to the stable after dinner and I worked Ashke. He was pretty surprised to find a small human (boy about four) rolling all three of the blue barrel racing barrels down an incline towards us as we walked around the edge of the stable. From Ashke's reaction, he was more startled by the small human than he was of the blue barrels. Although, just for kicks and grins I rolled one of the barrels into the round pen for him to look at. He promptly lipped and rubbed on it until I made him get to work. I didn't let him do the same thing with the small human.

Then we moved to the big arena. We did some cantering, some trotting and some walking. I think Ashke was still getting used to the shoes on his front feet and might still have been a touch tender. We didn't work for long and I am looking forward to being out on the trails this weekend.

There is definite development of back muscles and Ashke is no longer clipping himself. He had one spot, but I know that happened in the field with Lacey and Rupert and he kind of tripped in the small ditch. Otherwise, when I am riding him he is keeping his feet away from one another.

And a touch of cantering. We did do a full circle and a half without him stopping. Today, Friday, he gets the night off. Tomorrow I ride out with Pam and Allectra for a short trail ride. Sunday, we do one with a bunch of people.


Pam had Allectra checked out by the vet. The vet said everything was good. He proscribed a medication to help with her flexion, since she is getting older and was perhaps a bit stiff. Otherwise, this so called friend of Pam's was just being mean.

This is the picture Pam's daugher took the other night. Too good not to share. (I asked permission first.) 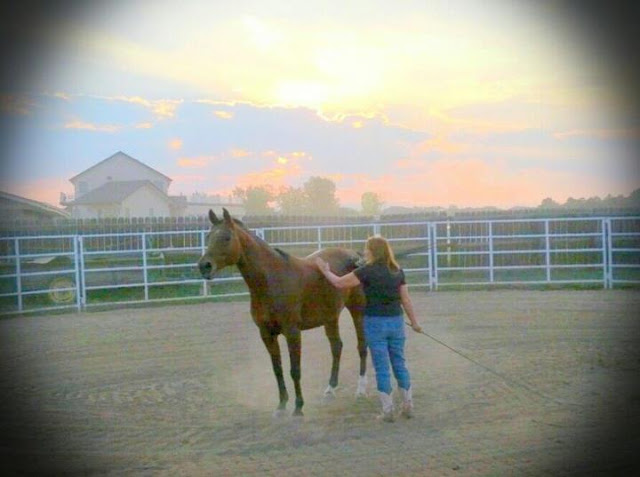