Today was the trail ride that I gave up Broncos tickets in order to attend. Ok, so I did organize it. And advertise it. And promise everyone I would lead. So, it is a good thing that Jake and T and J and Barb all got to go. They had a great time. The game was pretty good, although really hot, and I got to spend the day riding Ashke.

When I got to the barn, the first thing I saw was Miracle Man (one of Chris' horses) outside at the end of the barn eating grass. No person around. No halter on. When I realized who it was I gathered up his halter and put him back in his stall. Then I locked the stall closed and went to tell Fernando that the stall had been left open. Ashke was pretty upset with all of my walking back and forth without saying hi to him. The fly sheet seemed to work pretty well, was still on him and there was no more swelling of his neck.

Nicole, Abbi and I got them groomed and moved out to the big arena. I worked Ashke in a few circles at the end of his rein, and then mounted up. We walked and trotted and watched Nicole and Callie. Nicole moved Callie to the west end of the big arena and worked her in circles. At one point, Nicole asked her to canter and Callie exploded. She galloped and bucked and sunfished for a good fifteen minutes at both directions. Nicole kept her at that gait until she was breathing pretty heavily and finally ready to listen to Nicole. I really thought part of the problem on Saturday was that Callie hadn't been warmed up enough and allowed to work out whatever was bugging her. She was much better today after exploding in the arena.

Finally, it was about that time and we were ready to go. There were seven of us. 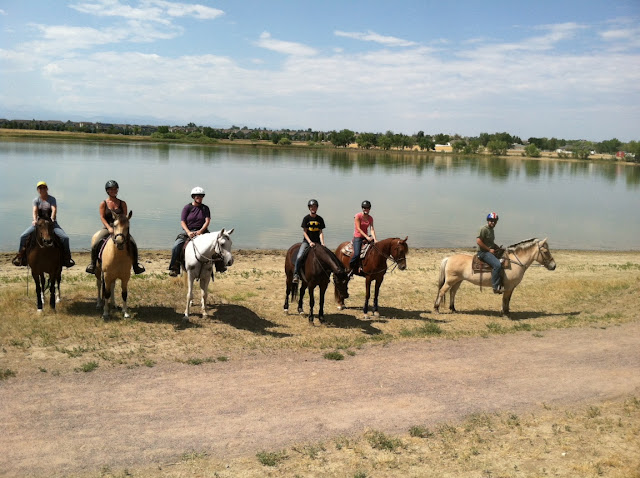 From the left of the picture is Susan with Kiele, Nicole and Callie, Ashke and me, Abbi on Rhythm, Grace on Jazz and Mike on Vanna.  Marit on Lacey took the photo. Mike was the only male rider and Ashke was the only male horse. Everyone did great and there were no issues with any of the horses. There were several obstacles we had to work through but everyone was calm and patient and willing to wait to give those of us riding green horses an opportunity to train our horses. Abbi, Nicole, Marit and myself all had those moments. 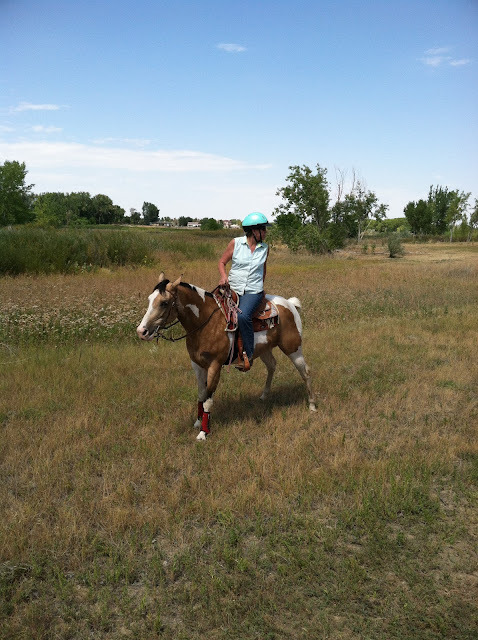 Marit on Lacey, who has limited experience outside of the arena. She is in the stall right next to Ashke and everytime he saw her, he would whinny like he had lost her. Silly boy, she was walking right behind him most of the day. 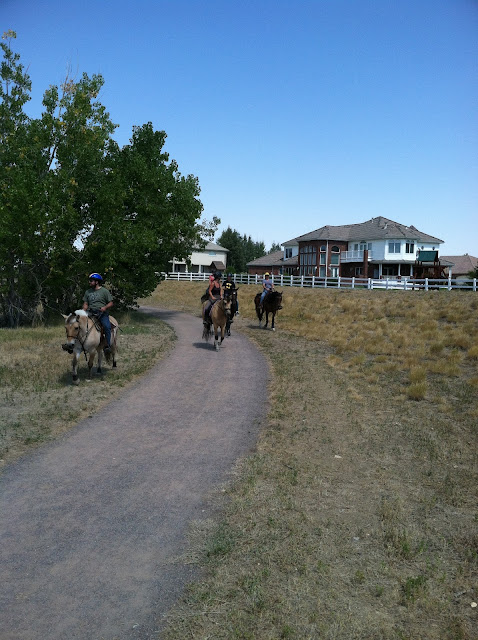 Mike, Grace's husband, is riding Vanna, who is a fjord horse. Not a pony. Just a short horse. He said he was really sore at the end of the ride. I was too. 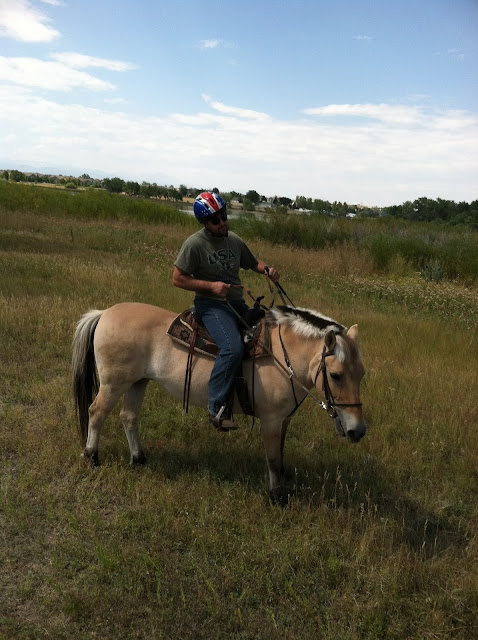 Vanna was a rock star. She was rock solid and seemed to really enjoy the ride. Her ears were up and she had no issues with leading the pack. 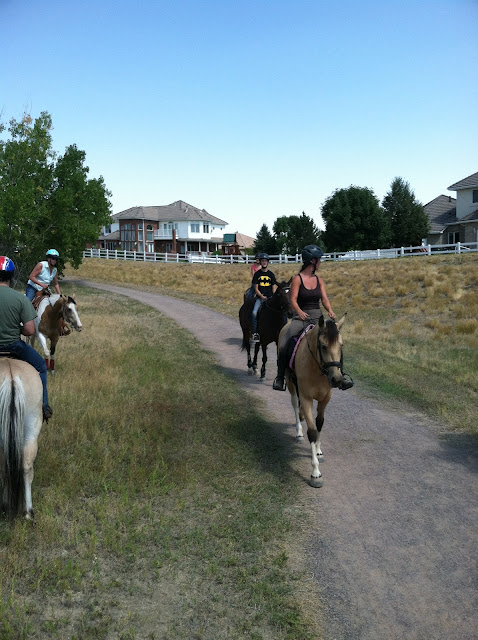 We moved at a walk, a fairly comfortable walk, but a walk nonetheless, for the duration of the ride. The horses were pretty tuckered by the time we got back to the stable. It's just about 5 miles and took just about two hours to ride. 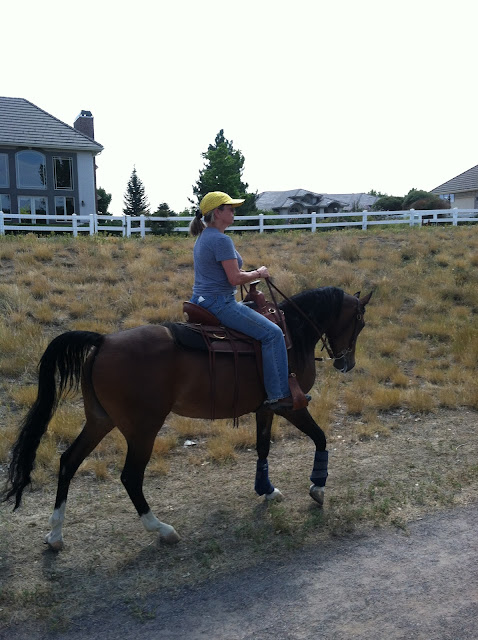 Kiele seemed to enjoy being ridden in a way that didn't require making circles. She and Susan did a great job, although she was not real interested in the flapping black nylon windbreak staked out across an area of land the Parks and Rec people were trying to rehab. I offered Susan the use and training practice of my car wash and tarp obstacles in the arena to help her familiarize her horse with them. We will see if she is interested. 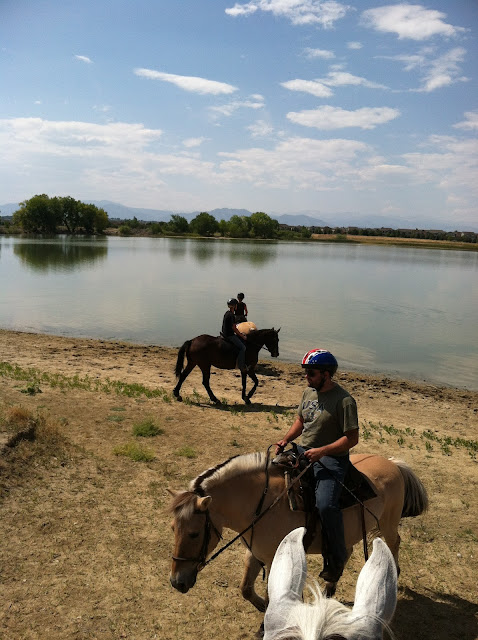 The lake was pretty fun, although Lacey was the only horse who actually went in the water. Ashke stepped in the mud, which was an improvement over the last time we were at the lake. He got in the mud up to the top of his hooves before deciding it was too scary. Maybe next time we will actually touch the water. 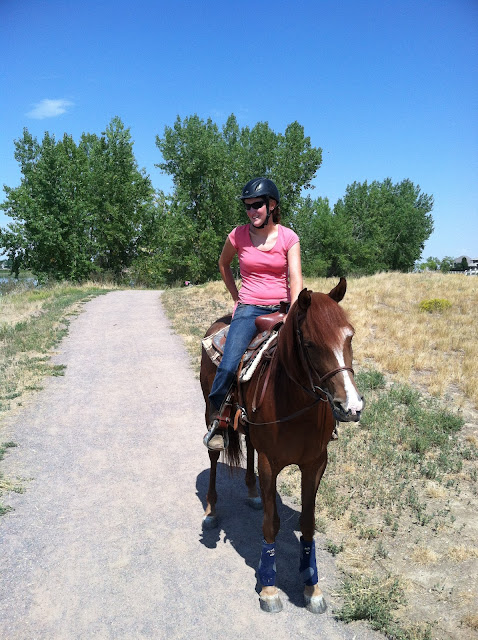 Grace, our barn manager, on Jazz. Jazz is a Paint-Arabian cross. The only Paint you can see in her is the white sclera around her eye and Grace says there is a small dot of white on her belly. I haven't ever looked so I can't tell you the size or location. 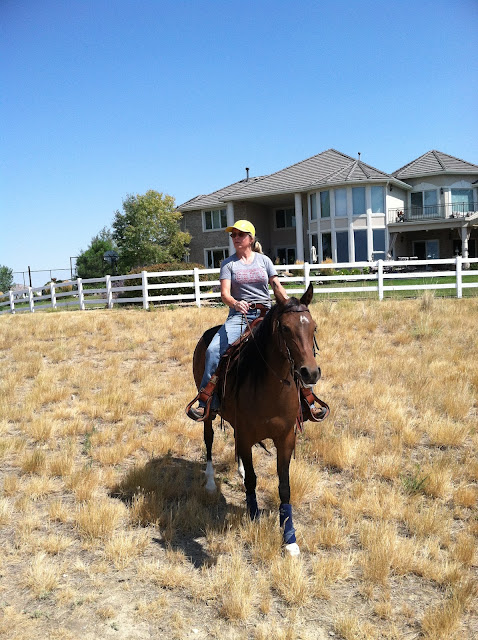 I don't think Kiele tried to go in the water. I think Susan was more comfortable watching. It was a nice change from the day before. 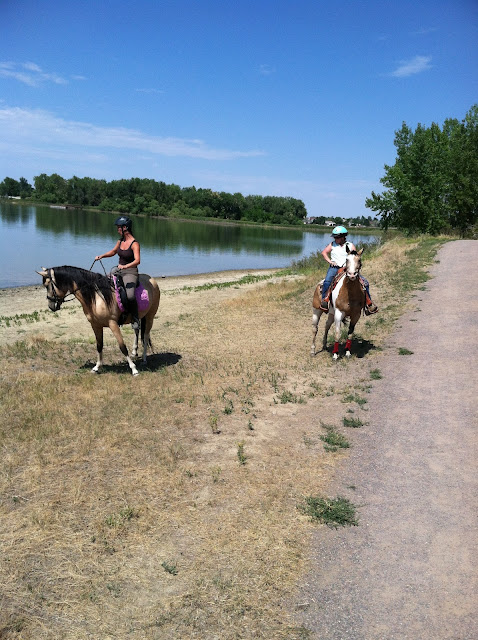 Callie has got the best mane in the world. 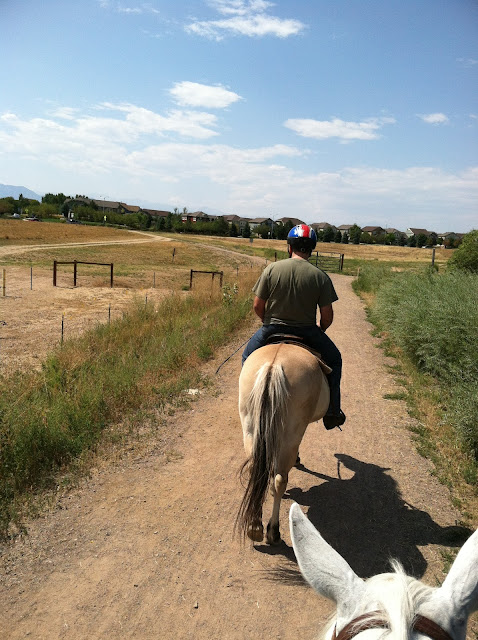 There is a section of trail that meanders under the trees and Ashke wouldn't walk into the shade. Lacey came up and backed down the trail, because she wouldn't walk forward. Vanna moved into the front and led the rest of the way home. There were no other issues. 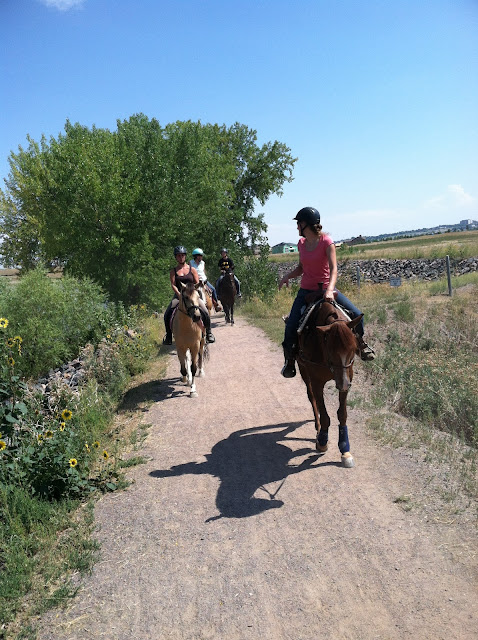 See the big trees in the background? Very scary. 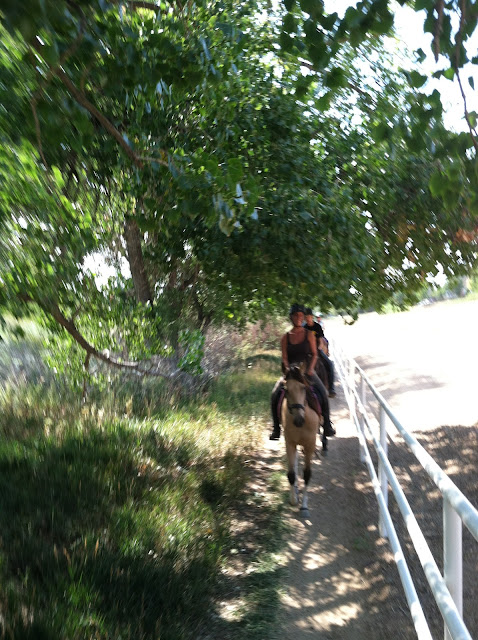 More shade, more trees, Vanna was leading so there were no issues. 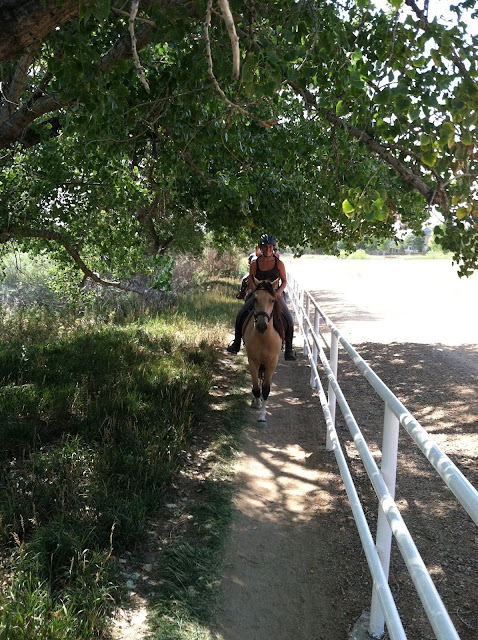 All of the horses were pretty beat by this point. 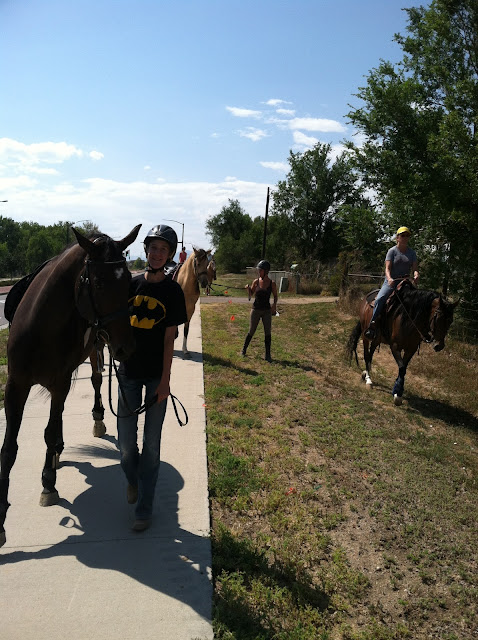 Some of us got off and walked the verge on 144th. I was one of them. I figured it was safer, although I think Ashke was tired of me getting on and off. My mistake last time we rode around the lake was not getting off when it felt like I should. I didn't make that mistake today. I got off even when I think I could have managed from the saddle. Ashke is so much more relaxed when I am next to him on the ground and next time he will remember that and be okay with me on his back. 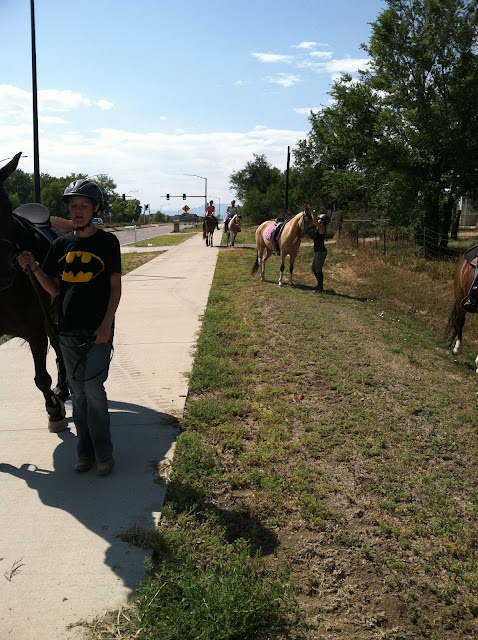 Nicole got back on but I waited until we hit Pecos to mount up again. 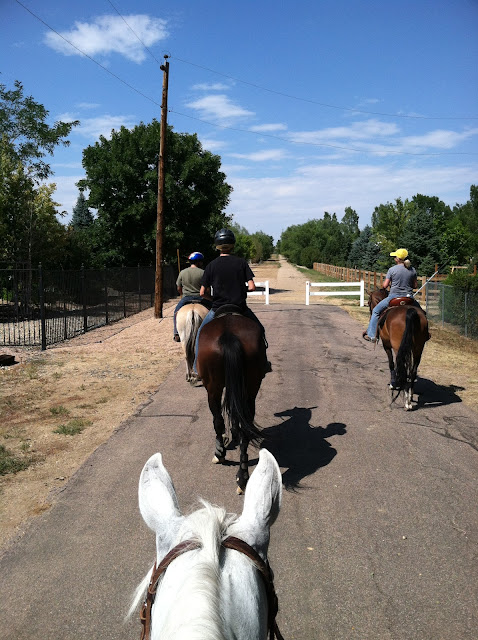 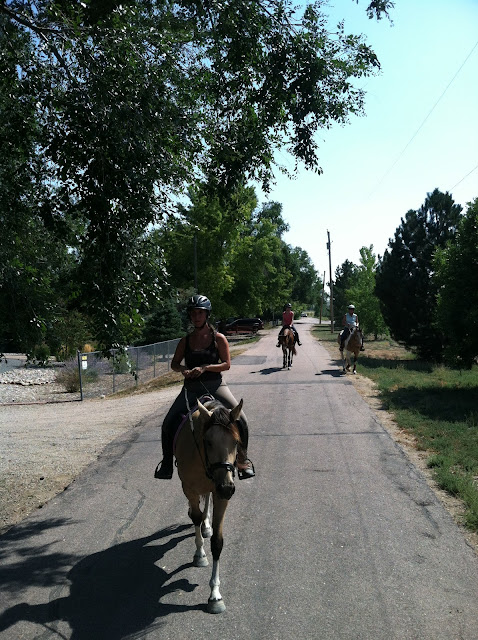 Kind of spaced out. The horses were getting pretty bushed. Callie was regretting her frantic galloping in the big arena about now. 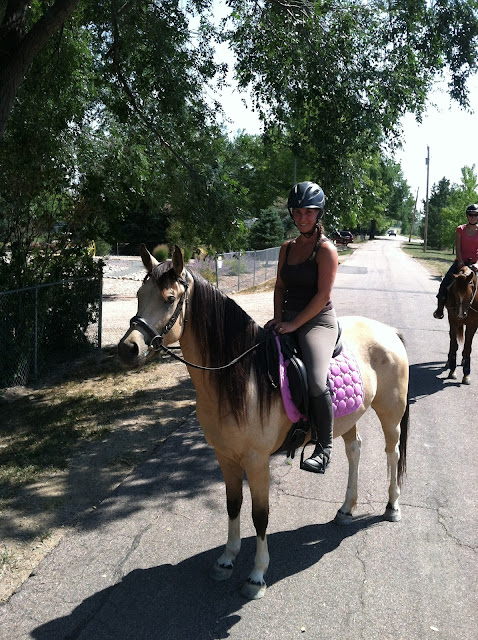 Our next ride is going to be the in a couple of weeks. We are going to try a different time so Chris can join us. Between now and then I will have to see if I can find other people to ride with me.