On Sunday, before I left, I put the sheet on Ashke. It's light weight and helps keep the flies off of his back, hips and belly (basically all the places the tail doesn't reach). Grace texted me on Monday and said she had taken the sheet off to turn him out and she discovered the sheet had rubbed all of the skin off his shoulders. 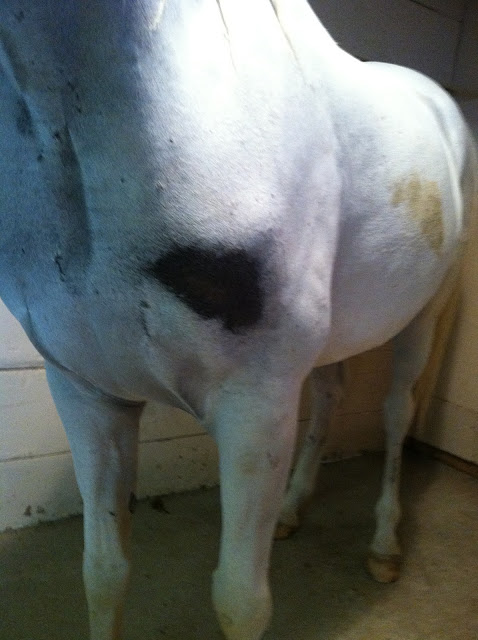 It's not raw and the skin isn't broken, but it does look pretty bad. 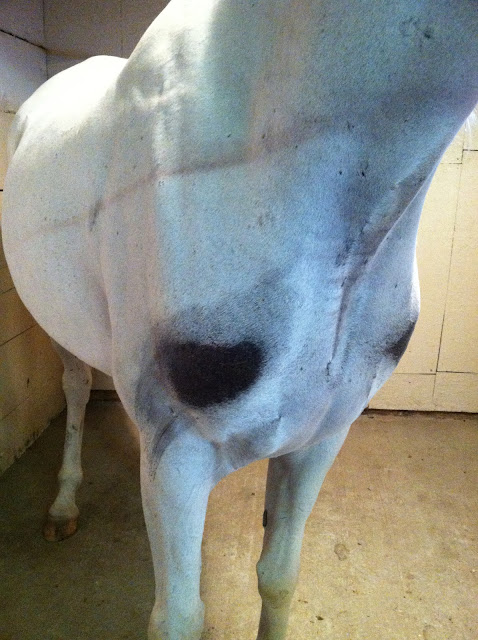 The long line is a shadow from the cross tie and the smeary parts are the antibiotic I applied and he rubbed over his coat. Pretty messy, huh?

So, being the good mom that I am, I immediately searched the interwebs to find this: 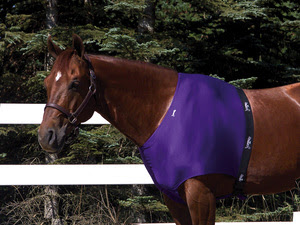 They are equine Jammies by Toklat
Ours is in a royal blue. It covers the shoulders to prevent the sheet from rubbing. We ordered it in medium and I think it fits pretty good. I'm still not crazy about the sheet, but since the damn thing cost almost a $100, I'm also not very crazy about not using it. Shoulder rubs must be fairly common for someone to come up with the idea of Jammies. It is made from lycra material and operates by the same principal as biking shorts. Nifty, huh? I left him all covered with both the Jammies and the sheet and will be back out there this morning about 11:30 to have his feet trimmed, so I can check him then.

I will try to take pictures of his outfit when I first get there, plus pics of his feet before and after the trim.

Last night was pretty sweet. He had only been lunged and worked from the ground on Tuesday after having Monday off. Last night he was groomed and saddled, then lunged in the round pen. I pretty much let him work himself, which was at a canter, sometimes faster, sometimes slower. By the time he had taken the edge off it was coming up dark and I was ready to be inside. The indoor arena is nice but it is somewhat smaller than the outdoor. We still have not gone the entire oval at a canter. The ends are pretty tight corners and we are still working on our balance.

Ashke was pretty dancy. It took fifteen minutes of consistent trotting to get him to settle into a sweet trot. I am getting back into my riding fit and sitting a trot is becoming so much easier. I find that it is taking me less time to realize I am stiff and poised on the balls of my feet, which triggers me to relax my legs, settle my seat and drop my heels. Once I've done that, I stop fighting the movement and my body takes over. We are still struggling with the canter. I really think I need to find a nice long track that is fairly smooth to work him in the canter. He needs some long straight away to stretch out and settle. His balance is getting so much better at the trot and I am feeling fairly comfortable at the canter. I just need to train my body to ride that gait like we have rediscovered sitting the trot.

We worked on some side passing in both directions. He really doesn't like heel pressure and has a tendency to swish his tail. I am sure to praise his try and to not overwork him on any of the things I am asking for. Tonight the plan is to groom and lunge. Then he gets Friday off and I have trail rides planned for both Saturday and Sunday.