There is a line in one of my favorite movies that I always thinking in my head anytime someone mentions spurs. It is from The Man From Snowy River and it is part of the bunkhouse scene, when Jim is being kicked off the ranch. One of the other ranch hands, Curly, is badgering Jim verbally about breaking in the colt, then suggests that Jim might have broken in the young woman as well. His comment "tell me, did you have to use your spurs?" is what I think every time I think about spurs.

So, last night's lesson was stimulating, challenging and exhausting. My legs were sore and wobbly like wet noodles when we were done. I don't know why - it was such an easy lesson.  :)

I put out five cones in the double slalom pattern so we could work with reference points in our ride. Amanda had us start with serpentines at the trot, adding in the transition to the walk after a few minutes, and then adding canter departs once it was obvious Ashke was warmed up enough to canter. I'm still working on not throwing away my hands when asking for the canter, but also making sure I'm not pulling either. It is a fine line between the two and I didn't realize what a very nasty habit throwing my hands forward when moving into a canter I had retained from when I was young. It is probably the hardest thing to relearn that I've been working on. If I throw my hands away, then the contact is inconsistent, but if I don't follow a bit with my hands, Ashke gets claustrophobic and banged in the mouth.

I talked to Amanda about Ashke backing. It's a problem, because of him dragging his feet and although he is so much stronger than he was, he really doesn't understand why he needs to lift them up. The night before I had tried teaching him to back over a ground pole and that wasn't fun. I talked to Saiph about it afterwards and I guess that's the horse equivalent of stuffing a cat in a shoe. Ashke acted like I was trying to kill him. We did get one or two clean backwards steps over the ground pole, but neither of us enjoyed it and I need to find a different way. I shared all of that with Amanda and we talked about a couple of different things I could try. Then Amanda had me work an exercise that is actually prep work for piaffe.

We were to trot forward in shoulder in, halt, back one step and trot off while maintaining the angle and bend. The theory is that the horse has to really step up with his hind feet, snapping them up. We didn't get a clean back step, but we did get a clean, snapping forward step, where he was really have to use his haunches. We only did it three times in each direction of bend, since it was really working his hind end and it was still early in our ride.

After that exercise, we moved to leg yields at the walk. I am really thinking about riding the Intermediate A test for our last WE show, partly because leg yields at the walk suck, and partly because Ashke is really good at changes through the walk (simple change) which is actually easier for us than changes through the trot. We will see. Anyway, he gets really slow at the leg yield, which could be seen as resistant in our test. We moved to more shoulder in after the leg yields.

Then Amanda had us do shoulder in serpentines, which caused thick black smoke to pour from both our ears (mine and Ashke's). The exercise went like this: 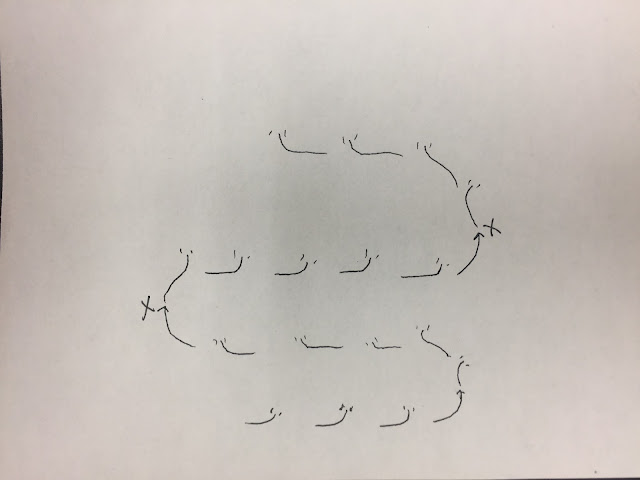 The X marks where the change of bend happens.

So, we started with a shoulder in position that would match the bend of the turn at the edge of the arena, as we moved around the corner the shoulder in became a quarter of a ten meter circle, and then we were supposed to transition into a shoulder in in the other direction at the apex of the circle. The first challenge was for me to wrap my head around which direction we should be bending, since I have a tendency to do it backwards. Then I needed to communicate the parameters of that exercise to Ashke. Seriously. Smoke. About the third attempt, Ashke just stopped trying to bend through his body, I asked Amanda to retrieve my spurs. (I bought them awhile ago, but hadn't had to use them yet.) We got them on and tried the exercise again. Amazing how much more clearly Ashke heard my request and made the effort to do the exercise correctly. We were actually achieving counter bend at the apex of our turn, at least for a couple of steps.

Amanda explained that when horses reach the point we are at, sometimes they get muddied in their minds about what we are asking for. Sometimes, the spurs help with clarification on what is being asked. It was certainly the case last night. We moved to haunches in after to see how he responded to my requests with the spurs. I think my ask must have been much more clear to him, because he was able to do that exercise cleaner than he has in the past.


Up next, Amanda had us ride the drum pattern around the cones we had set up. The circles were huge, but we were mostly working on keeping his haunches in at the canter on the circle, and the transitions through the walk between the drums. We worked that pattern in both directions which blew the boy's mind again, since he really wasn't sure he had heard me correctly when I asked for the left lead. This is a great example of why you should work both sides and not just ride the drum pattern. Maybe next time, I should ride the barrel race pattern for the cloverleaf, rather than the WE pattern for the drums.

After the drum pattern we did the double slalom in one direction only. Our only issue was our transitions were a little early, although the canter depart was in the correct position. I have to keep riding the canter for one or two more strides before coming down to the walk. That's mostly me getting tired and Ashke anticipating.

The next exercise was working the single slalom in varied patterns. We only had three cones up, so Amanda had us circle the final cone and ride back through the three. Then the next time we did that pattern and then circled at the end and rode through the other two, turning those into a figure 8. He did really well, but I could feel how tired he was beginning to get. Amanda could see it as well.

We finished up with trotting a spiral circle around a cone, starting with haunches in as we spiraled in, then leg yielding back out on the spiral. We did that spiral exercise twice, then added a canter depart as we widened the circle and cantered off in a straight line. We did it moving counter clockwise first, then turned and worked the exercise in the other direction. That time, when we cantered off, I could feel Ashke beginning to struggle. He was wiped out. We transitioned down to a walk and both Amanda and myself said he was done at about the same time.

He wasn't sweaty, except under the saddle pad, but he was tired. We are doing some pretty heavy weight lifting and although the challenge is fun and exciting, we are both pretty exhausted by the end.
Posted by Cricket at 8:34 AM