Saturday, J and I headed to Boulder instead of Wyoming because eclipse. I'm so amazed at the number of people who drove north to watch the eclipse while parked in a huge field next to hundreds more people who had done the same thing. And I'm not really surprised at the enterprising capitalism of the hotel and motel owners who tripled their rates for the event. I am very happy that my parents drove to my sister's place in McCall, Idaho to watch it from the comfort of their cabin.

Me? I will watch the shadow over the sun from my desk at work.

Saturday, though, we drove to the Marshall Lake trailhead in Boulder. We grabbed lunch prior to our ride, but didn't pack enough to cold drinks to last the ride (doh!). Ashke felt loose and ready to go when we hit the trail. It was supposed to top out at 90 or so, but it ended up almost 96 on the day. We headed east from the trailhead, then turned back West to ride the canal. Then we started up the hill for Greenland Mesa. 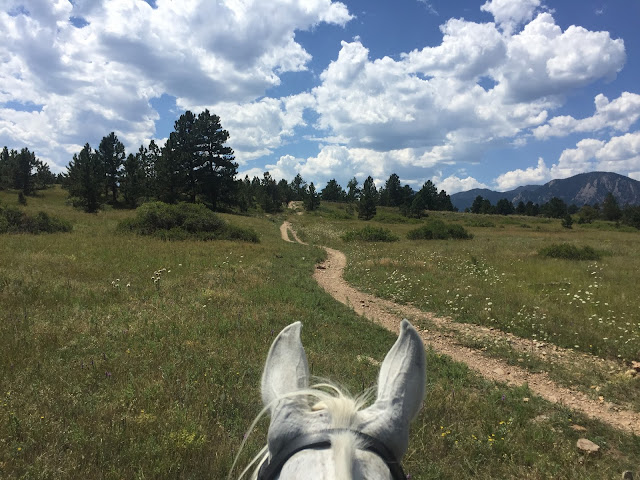 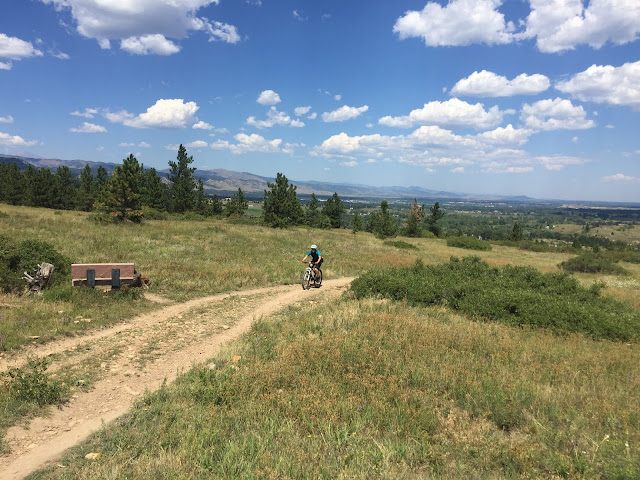 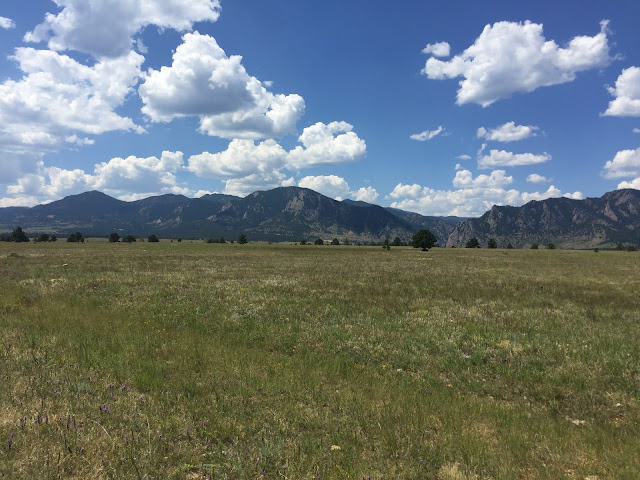 From the top of Greenland Mesa looking west. 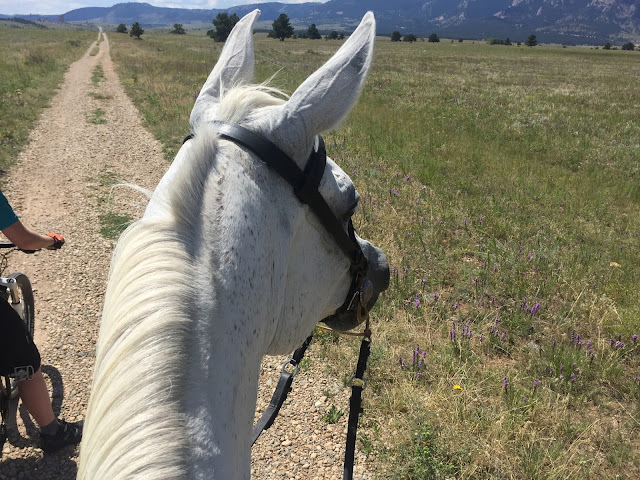 Ashke loves riding right next to J so he can bump her bag with his nose.
He pins his ears at her when she doesn't give him a peppermint.
Not in a mean way, but in a "gosh why aren't you paying attention to me" way.


When we got to the far side of Greenland Mesa, J was struggling with the heat. It was a lot hotter than expected and she was way overheated. She asked about turning back, but when I pointed out that we would have to climb the hill she had just ridden down, she opted to continue on. We crossed the street at Hwy 93 and it was pretty apparent that J was going to have issues if we couldn't get her temp down. She had heat stroke in 2005 and it's still effecting her. I suggested we try the cattle pond just over the hill from where we were. The water isn't drinkable, but Ashke could have some and J could get wet. We got over there and she pulled the packable towel she always carries to wet and drape around her neck. Ashke went in belly deep and splashed water all over, while letting me know he would really rather lay down, which I stymied, the spoilsport I am. Once we were all cooled off, I told J that once we were down the draw, we could head for the river that flowed out of Eldorado Springs, where we could cool off again. That seemed to be a good plan, so off we went. 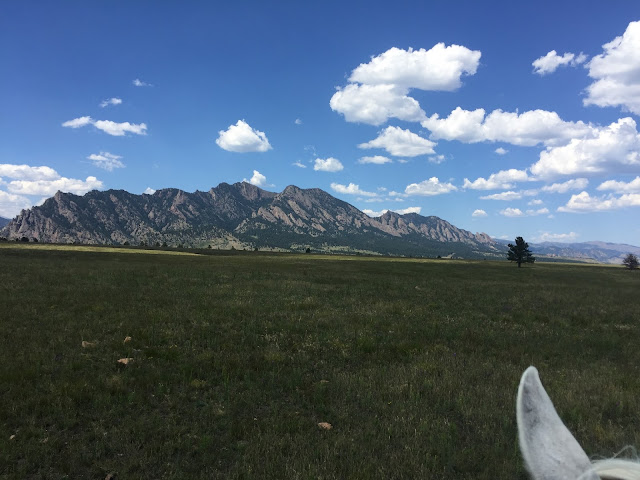 Getting closer to the flatirons 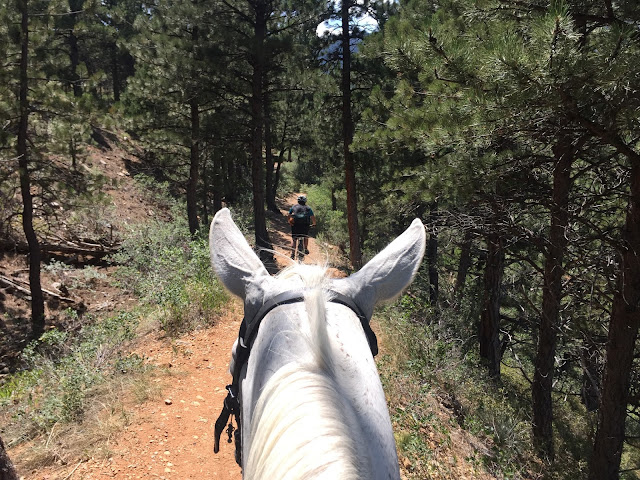 I love this trail, but it is so rocky. 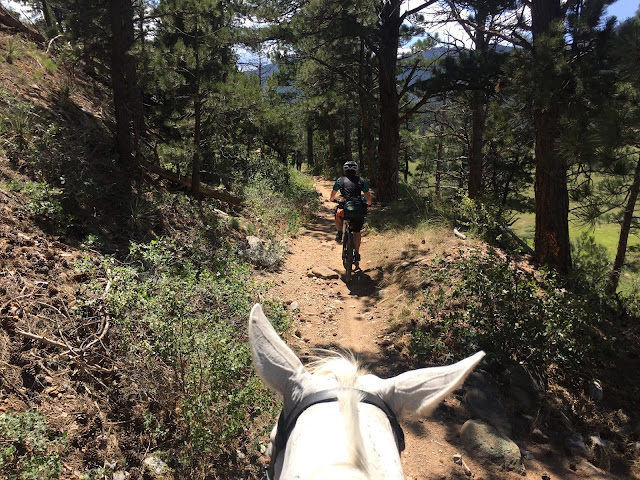 For the first time on this particular trail, Ashke didn't fight any of my requests to move from one side of the trail to the other, to step slower, to use his butt.

Just after this video, we came across a crashed mountain biker who had stuck her front tire between two rocks and flipped herself over her handlebars. J went into "always be prepared mode", cleaned up the long scrape across the woman's shin, then added a compression wrap with bright blue vet wrap. The injured woman could stand and push her bike up the hill, which is good, since I wasn't too keen about loading her on Ashke to get her out of the canyon. I had dismounted as we approached, since Ashke dances less with me on the ground. And steep hill side to fall down was motivation enough for me. We mounted up and headed down.

There are parts of this trail that get very open to the downhill side and Ashke is usually somewhat spooky about the uphill side, which increases my nervousness. But on Saturday, he was rock solid.

This is the trail down after the one switchback. It was so rocky that J couldn't ride her bike over them.
I asked Ashke to walk very carefully, and slower than normal, behind her without him bracing his jaw, throwing his head up, or jigging down the trail. And he listened, with his head down, a light contact with the bit.

We went to the trail head for Dowdy Draw instead of heading up community ditch, where we crossed the road and headed further west toward the river. It was every bit as beautiful and cold as I remembered. Ashke waded right in and drank deeply, while J shed her socks and shoes, clambered through the shallows and straddled the low branch hanging over the water. Ashke got a good cold soak in the fresh water, while the temp of the water brought down J's core temp. She also refilled her water bottles for pouring over her back and shoulders further down the trail. I love these little hidden spots you can still find in the area. 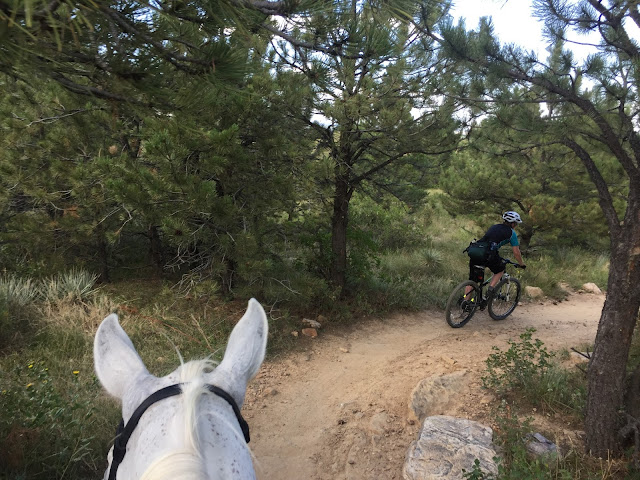 J's favorite part of the trail, just before we get back to the trailer. 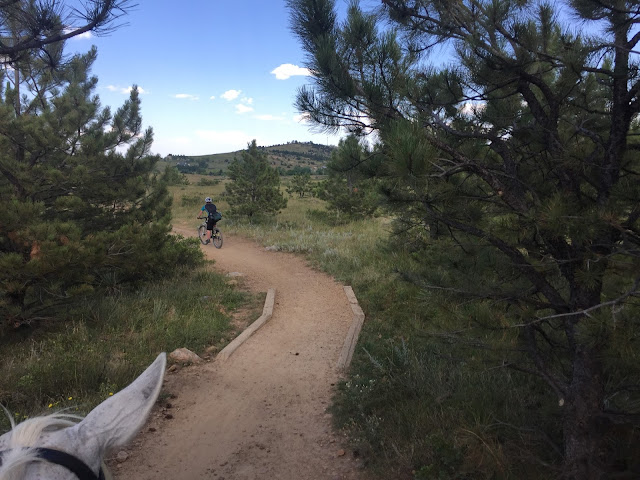 11.25 miles with lots of beautiful terrain. It would have been better if it had just been ten degrees cooler, although the heat and the brilliant sunlight were part of what made the river so wonderful.
Posted by Cricket at 11:17 AM