Amanda's mom purchased a Garcia bit in the early 70's and showed in it for years. Amanda has been talking about this bit for a while and I did some research into the bit. I want to share that with you . . .

It started in 1894, when young Guadalupe S Garcia left his home and business in Santa Margarita and moved to Elko, Nevada where he opened G.S. Garcia Harness and Saddlery. He made quality products: beautiful bits and spurs, sought after by working cowboys every where. He and his craftmen build the World's Fair Saddle, using the finest leather, gold, silver and diamonds. It won gold medals at the St Louis World Fair and the Lewis and Clark Exposition in Portland, Oregon. No one else in history has ever won both. When he died, he passed his business to his three sons: Les, Henry and Eddie. Eventually the business moved to Reno, NV where it was known as the Garcia Bit and Spur Manufacturing Company. He was also the proprietor of the Elko rodeo grounds, which later became known as the Elko Rodeo or Elko Stampede, the predecessor to today's Silver State Stampede.

In 1978, Doug and Paula Wright, from Elko, bought the Garcia company, merging it with the J.M. Capriola Company in Elko where Guadalupe first started. (Jim Capriola worked for Garcia in the early 1920's before leaving to start his own business that eventually ended up buying the Garcia Bit and Spur Company almost 60 years later.)

Today, Garcia bits continue to be built by carefully trained Mexican craftsmen who proudly continue the tradition of the Garcia name. The same mouthpieces and cheekpiece designs are used that were used in Guadalupe's time, with the addition of a few new, select cheekpiece designs. The bits and spurs are in the Vaquero tradition, which would actually compliment our Spanish attire. They are incredibly well balanced and hang straight in the horse's mouth.

This is the bit I am currently testing on Ashke: 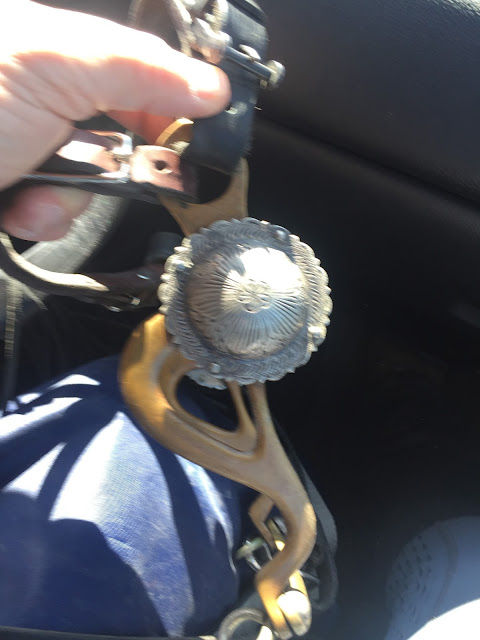 Two and a half inch Concho bit 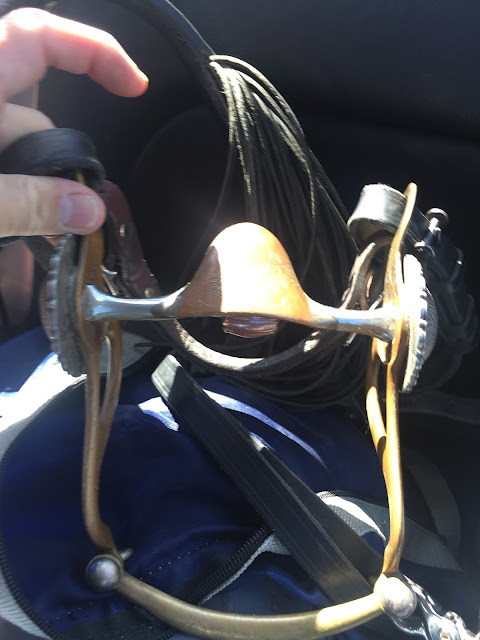 Mona Lisa mouthpiece with copper cricket roller under the hood 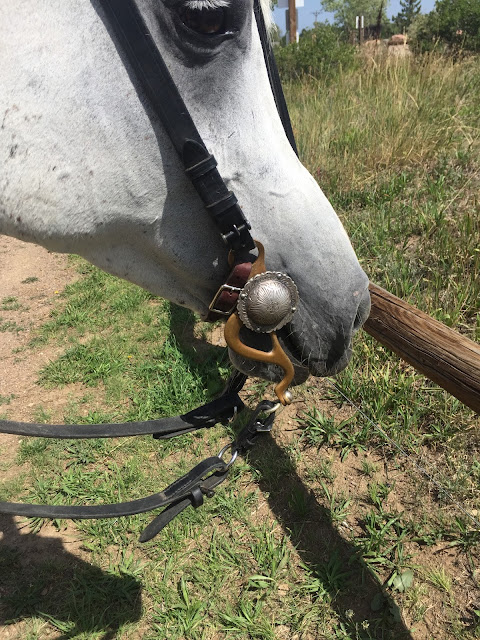 How it looks in his mouth.

The rings where the reins attach are fairly small. When we tried the bridle on Tuesday we had bridle chains on the bit to attach the reins and neither Ashke or myself liked them. Any slack in the rein caused the chains to swing and that was a problem. We also didn't have a great way to attach my reins, since the ring the reins were supposed to attach to was too small for the width of the leather. I had ordered a pair of rein connectors to try the pelham bit (which he hated) and suddenly had the item shown below that I am never going to use on a bit. 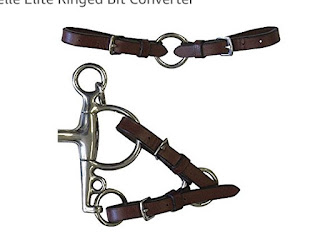 The leather is fairly narrow and fit the ring on the bit very well. I attached the narrower leather strap to the bit ring, then cut the second piece of leather off the center ring, then attached my reins to the ring. I had snap clips I could have used, but I really don't want to ride out on trail in snap clips. All it takes is a rub against his leg or an object and my rein is no longer attached. They can also effect how the rein hangs off the bit. Using the rein connectors meant the reins were attached, the weight on each rein was the same, and the drape of the reins was really good. I also like the look, plus any change of reins will be simple.
My thoughts on the Garcia bit:

1. It is a very well balance bit that hangs straight in Ashke's mouth. The bit has some weight to it and I think it is the weight that encourages him to relax at the poll.

2. Ashke loves the cricket roller. He plays with it a lot when we are walking or standing still. In our lesson on Tuesday, he would stop playing with it when we were working on the things that were more complicated, but when we were stationary or just walking you could hear it clicking in his mouth.

4. Something about this bit allows me to be really light with the reins. He listens and pays attention to my seat and legs much better than in the other bit. The contact between my hands and his mouth is consistent and soft, and he reaches down for the bit. Even on our eleven mile ride today, Ashke and I had contact the entire way. The one attempted bolt was stymied by the lightest touch of the reins.

5. We rode down Dowdy Draw and the last time we rode down the Draw Ashke fought me the entire way. It has always been a struggle to get him to pay attention to where his feet are and he hates to be asked to go slow. That fight always included his throwing his head straight up in the air and bracing his jaw against my hand. Today, he minced his way carefully down the trail, on the bit, at the pace that J could walk her bike down due to the rocks. Not once did he toss his head up. Not once did he brace against the bit.

6. For the first time, when we were trotting and I lifted him with my heels, his head came down, rather than him inverting and rushing forward.

7. No rubs, pinches, or other problems after four hours of riding. I am going to have to keep him from eating on trail unless I put the halter on him, since the food packs into the hood and keeps the roller from moving.

I have been given permission to ride in this bit for a couple of months. I will probably continue to ride and train in this bit until after my final show on October 14th. If Ashke is still responding to the bit this well at that point, I will purchase one of my own. Nothing like a fancy, special bit to match his handmade, ordered from Spain just for him, saddle.

This is the bit I think I want to order, if we get this far: 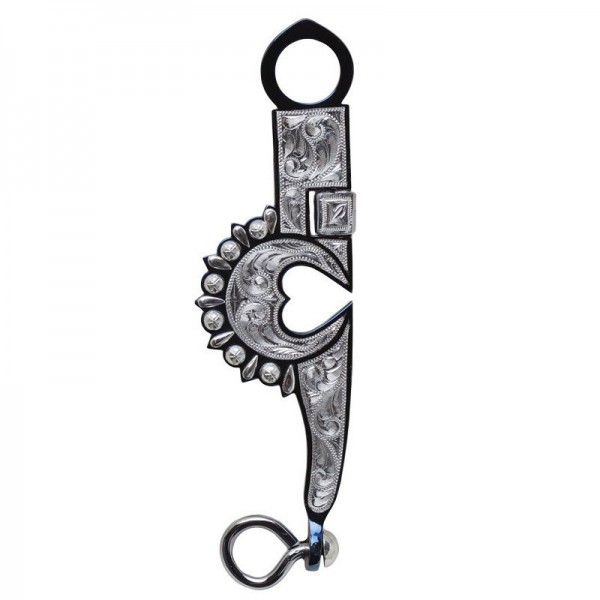 And I am leaning toward either the blue inlay or the silver overlay . . . . I really like both. I could also do black inlay, but it would push my cost up by $25. I think I am partial to the silver, honestly. 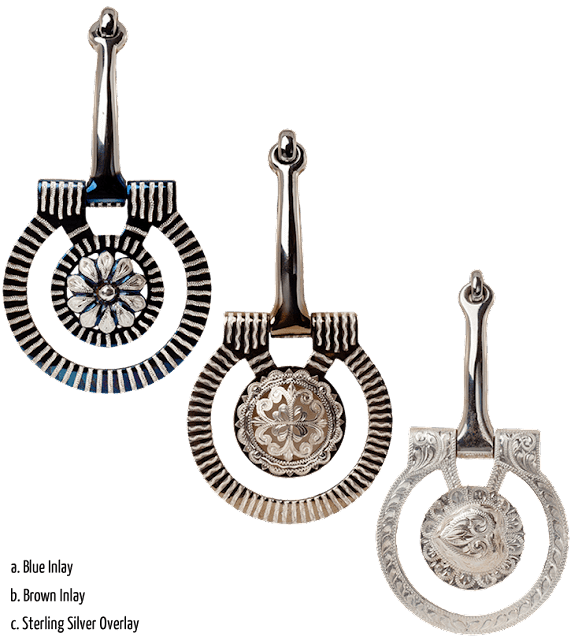 I will stay with the Mona Lisa mouthpiece in the same width as the bit we are riding in.

Now we just need to see if he likes the bit in three weeks, the way he does now.