It was thirty years ago that I left Denver and drove north to meet my parents camping at a recreational area know as Vedauwoo, located between Cheyenne and Laramie. I had no idea how I would feel driving Happy Jack road for the first time, headed for the back entrance to a place that would help shape my life over the next thirty years. As I drove west on Happy Jack, I had to pull the car over and stare at the shape of the hills south of the road. Something deep inside me recognized those hills, had ridden those hills on swift horses, had walked alongside the travois drags of the People. (Think of me how you want, but I truly believe we live more than one life and I lived and fought and died in a land shaped like that of Wyoming). It was 1987, and that was when the dream of riding that land one more time from the height of a horse was added to my bucket list, held deep in my heart.

On Saturday, J and I made that dream come true: 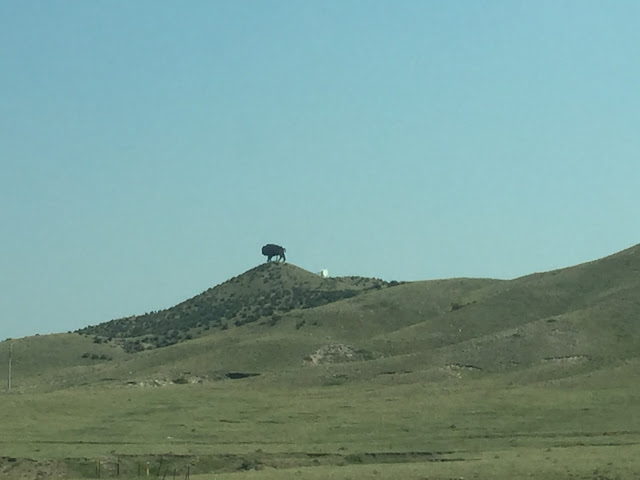 As the road curves around these rolling hills the huge shape of a buffalo greats the drivers.
This is actually an advertisement for Terry's Bison Ranch, but I still love seeing the outline of the buffalo against the wide open sky. 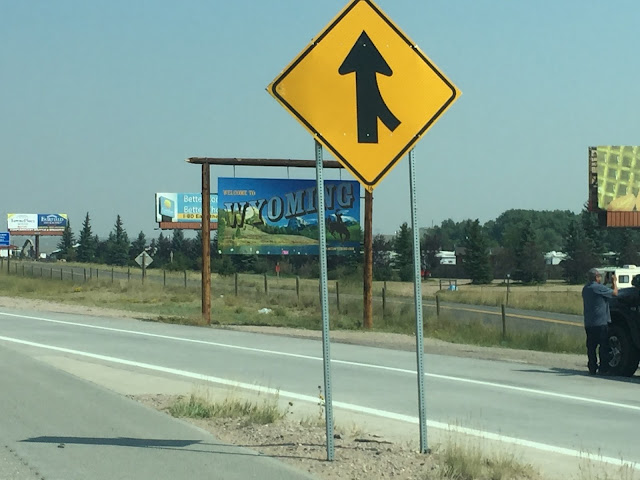 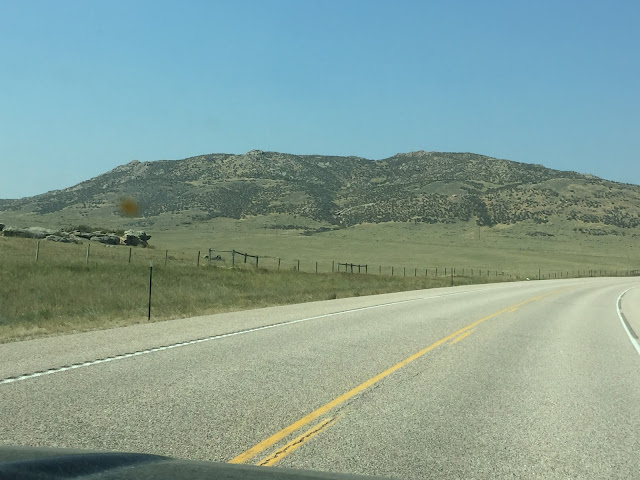 Driving Happy Jack from Cheyenne toward Laramie.
So hard to tell, but the smoke from the Montana wild fires was intense.
It would effect J's ability to handle the altitude, and my ability to breathe.
Plus, my eyes have been stinging non-stop for days. 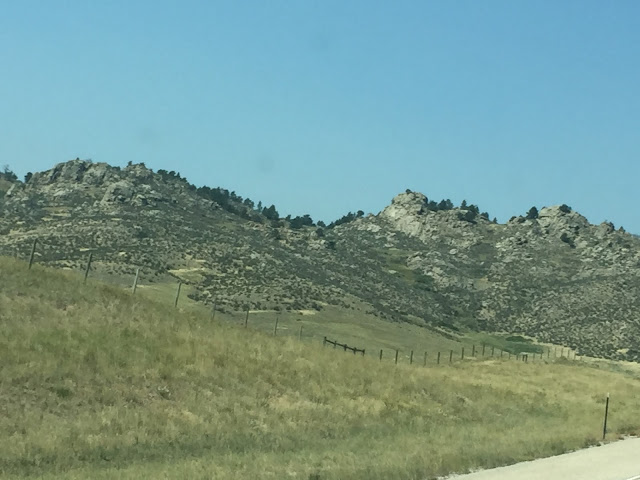 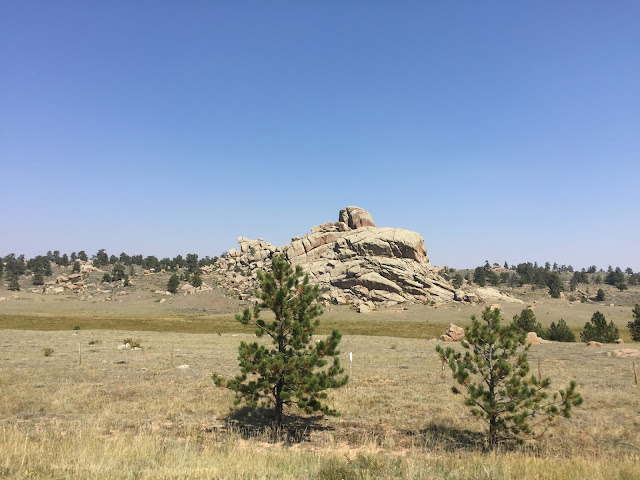 And I love the rock formations and energy found all through the Rockies. 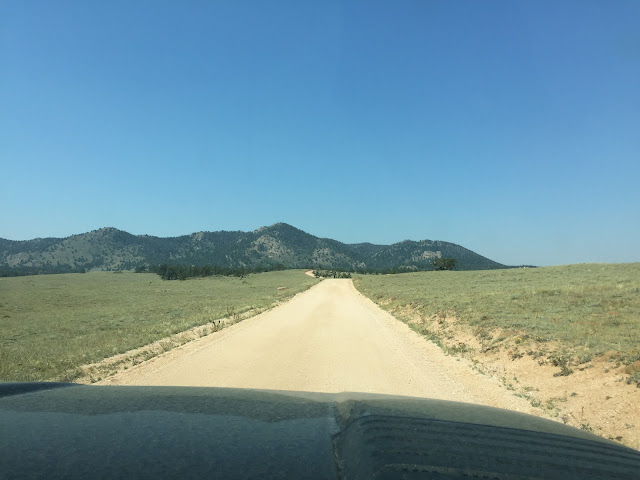 We turned off Happy Jack onto this washboard road.
Back a couple of miles are established corrals. This is where the Happy Jack endurance race used to be held. When we got there, the corrals were full, so we found a place to pull out and park the rig.
We didn't need the corrals, since we were just doing a day trip. 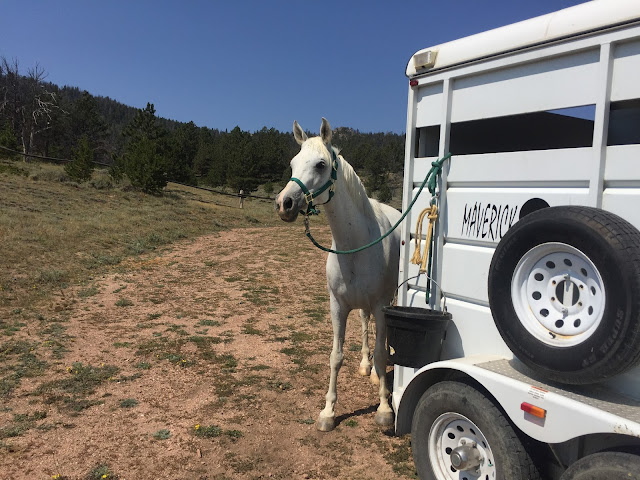 Ashke knew we were in country we hadn't ridden in before.
Much snort. Totes excited. 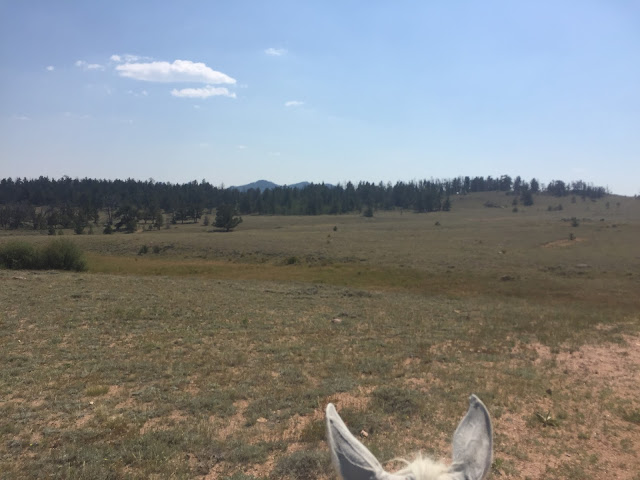 It looks flat, but honestly, we spent the day going either up or down. 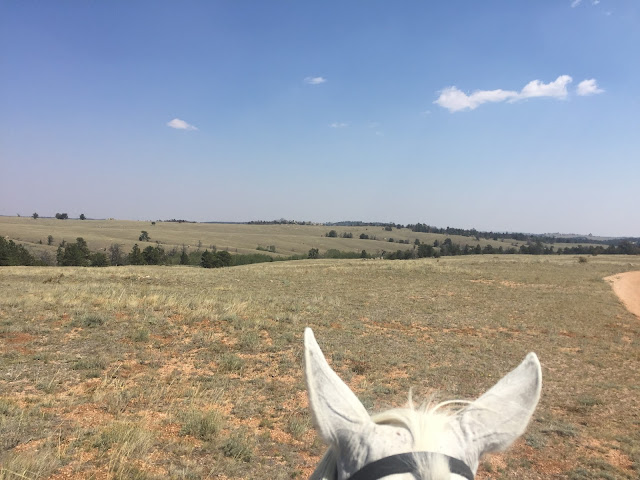 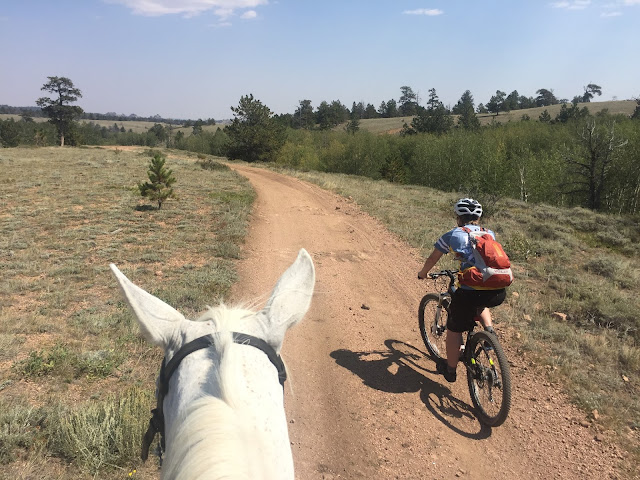 Staying close because there be monsters lurking.
Although, spooking three separate times at the same patch of purple wild flowers was a bit much. 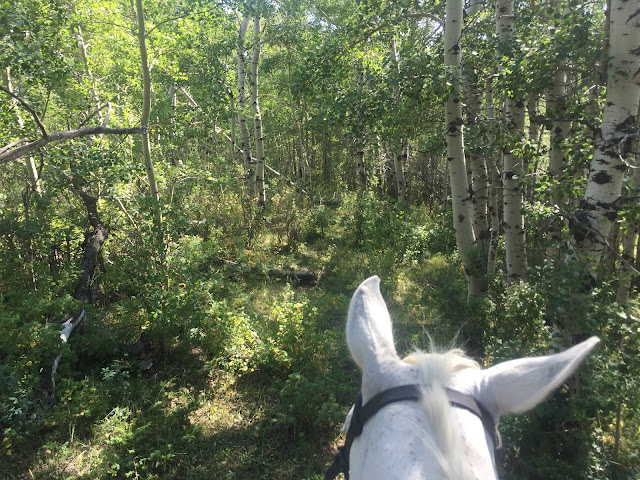 And Aspen patches near the creek. 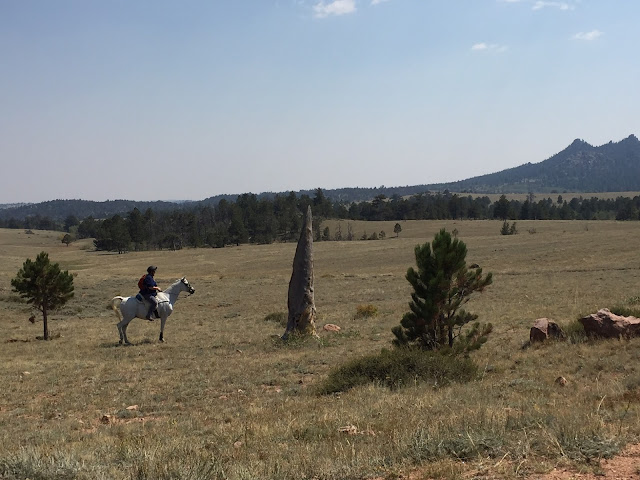 We rode up and down the access roads, mostly.
Although, Ashke and I did do some off roading. 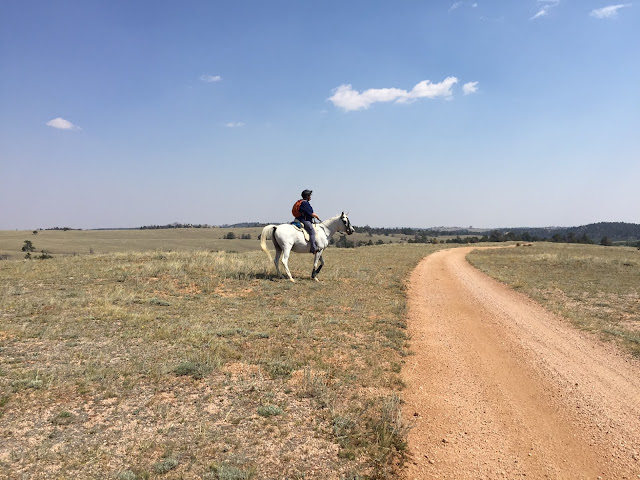 He was pretty much on fire for the first hour. 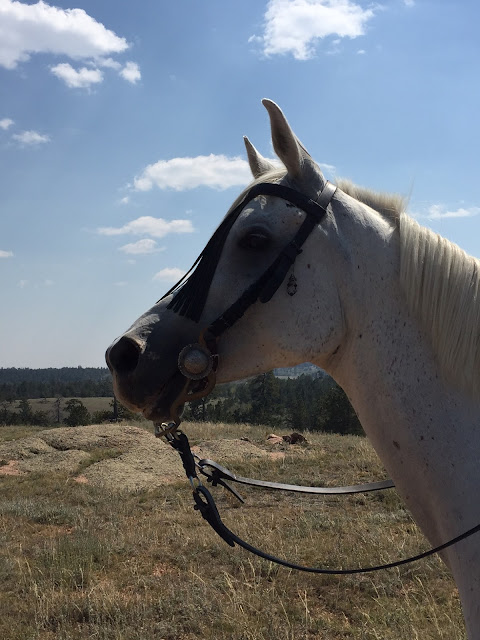 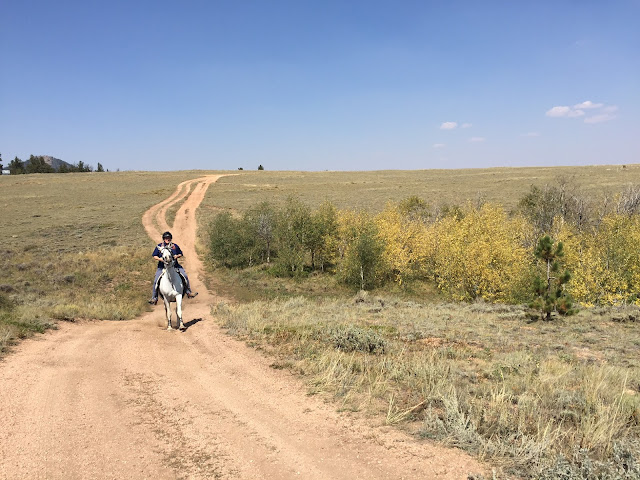 He bolted up the uphill. The only time during our ride that he tried to gallop away. 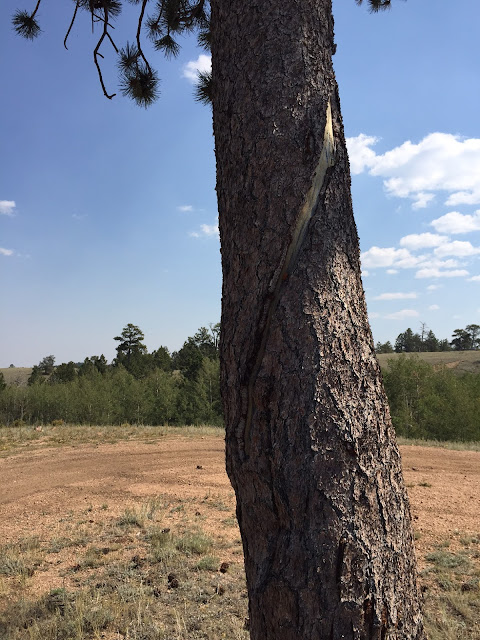 We get to the end of one of the roads and there is a single pine tree standing in a huge open space.
J said "that looks like a tree asking to be struck by lightning."
Sure enough. 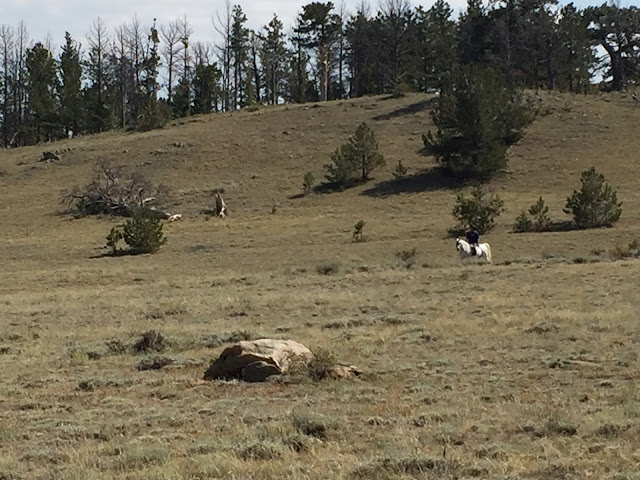 The expanse just dwarfs everything around it. 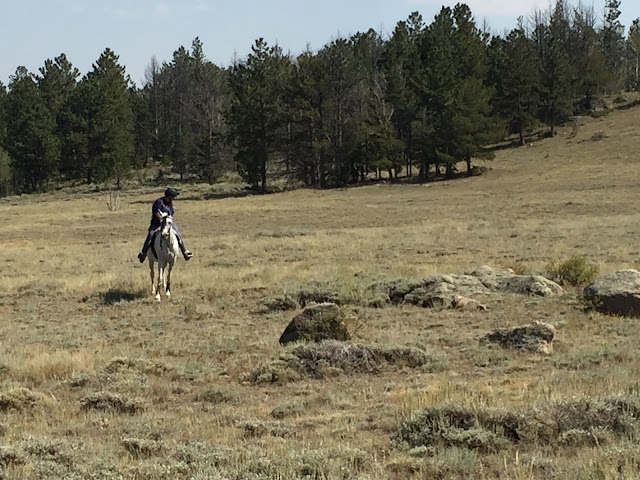 And now I know where I get the "straight legs sticking out from the saddle" riding form I've been struggling with when I indoor ride. It is my "brace against the downhill" riding position.
Yay for me!! 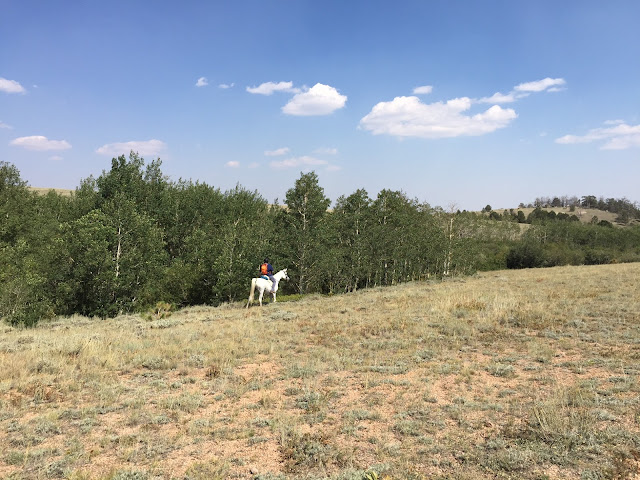 Found a trail I thought J and Ashke could do. 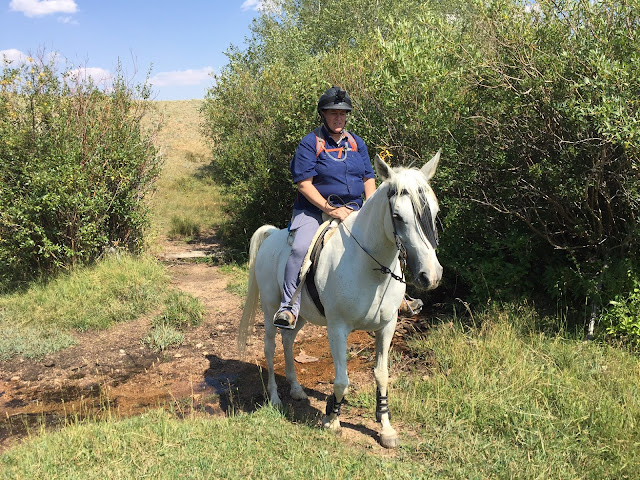 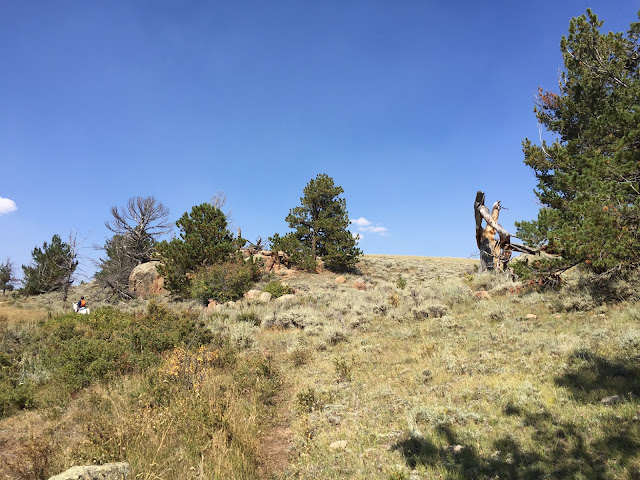 Trying to find a trail when the one we were following petered out. 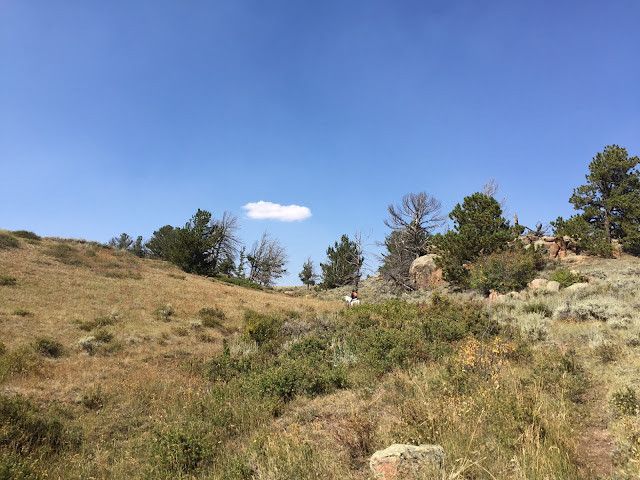 Can't blame J for waiting. Especially when the trail went no where.

A few clips from my GoPro. I loved riding among the Aspen.

We rode for almost three hours in the hazy smoke of the Montana wild fires and did almost 8.5 miles. Between the elevation gain and loss, plus the altitude (8200 feet) J was struggling with maintaining her breathing. Plus, there were a ton of campers tearing around on ATVs, dogs, and vehicles to contend with. We did find a sweet new camping spot we want to try, sans horse. It is close to the creek, which will make the dogs happy. (Just need to remember to bring towels.)

We loaded Ashke and made the hour and forty-five minute drive back to the barn, arriving about 6:30. Ashke was a trooper and traveled very well. He seemed to enjoy the trails and new environment. I think I would like to do it again next year, only this time park the trailer near "our" stomping grounds - the area where we are more familiar with the trails - and ride from there. I missed riding among the stones and rock formations, plus I think it might be a touch flatter on that side of the area.