Saturday was overcast and fairly cool. We had planned on taking the dogs and Ashke to Wyoming, where the dogs could be off leash for our first introductions to riding together. The dogs haven't even been exposed to J on her bike, so it could have been very interesting. However, when we work up that morning there was a 70% chance of heavy rain all day in Vedauwoo, so we opted for Boulder instead. We gathered up A, loaded Ashke and headed for the flatirons.

It misted for the first couple of hours and kept temps in the low 80's, which is the only way to ride this trail. When we got there and got ready to ride out, A asked if we could be back to the trailer by 3:30 pm so she had time to get home, get showered and dressed for a concert with her son that evening. Of course, we said we would be back before then. I was thinking "12 miles in four hours, piece of cake." Famous last words. 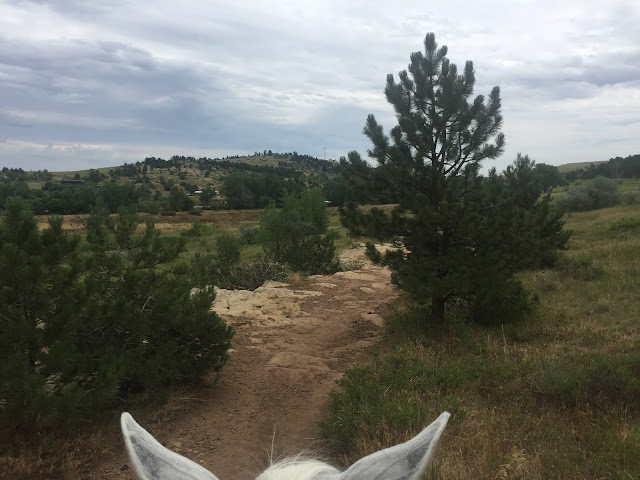 Riding the trails in Boulder will always be a favorite.
Note: slick rock ahead: we went around 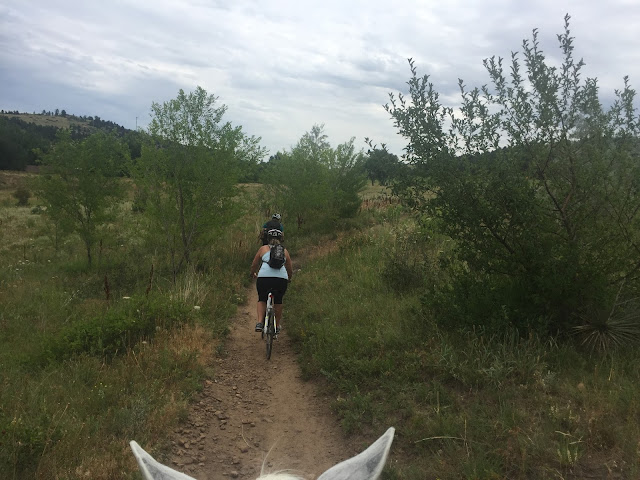 End of July and it was still fairly green. 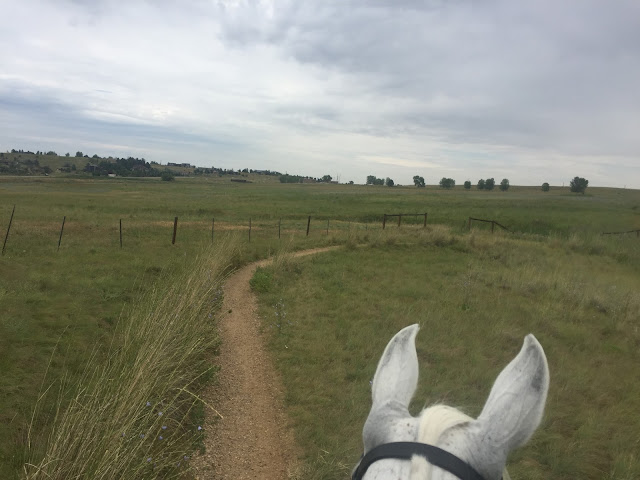 This is part of the trail we have only ridden one time. 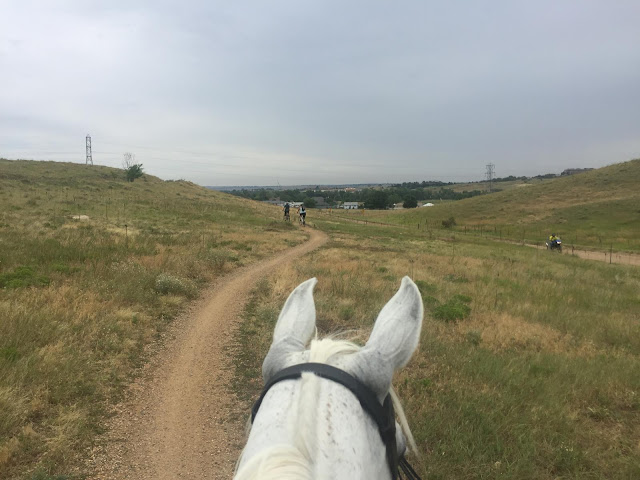 Trail was nice enough here that we enjoyed some cantering. 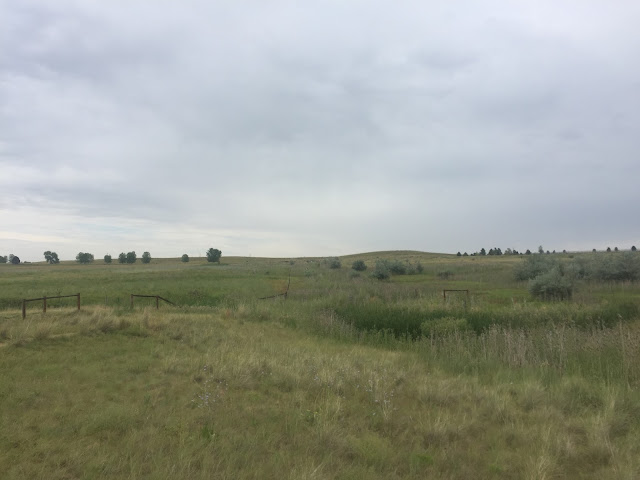 We were coming down into a bit of marsh. The trail is only about two feet wide at this point and the bushes on both sides are almost wither height.
Most of them are thistle.

There was one spot on the beginning of the trail where the path was wide, smooth and uphill. Ashke and I cantered up it with me laughing out loud all of the way. My biggest challenge is always his tendency to move sideways or break to a trot when we are cantering because of the pervasive bush monsters we encounter. I applied a concept I've learned from reading eventing blogs and kept my leg on the entire ride up that hill. He only spooked/broke gait one time and then immediately went back to his canter. It was an awesome part of the ride. He was so full of himself. 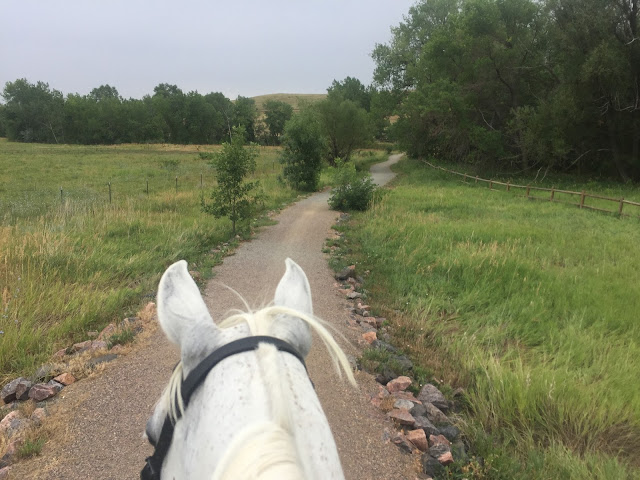 A bit of tree and shade where we stopped to snack.
Really should have packed our lunches, since it was lunch time and we were all hungry.
We will plan better next time. 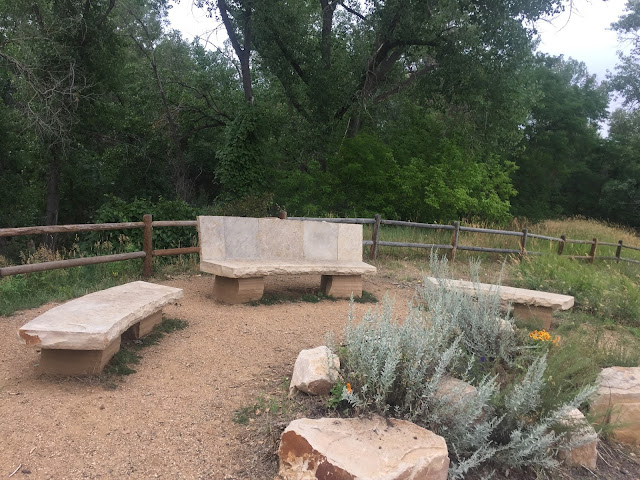 Just about 50 feet up trail from where we stopped for lunch. 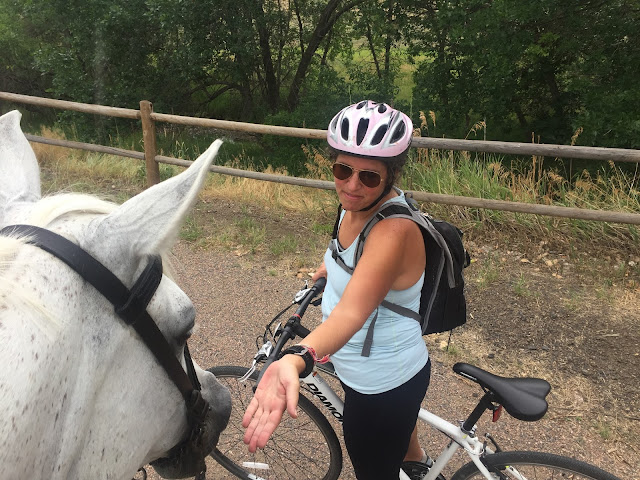 A showing Ashke she didn't bring any treats. 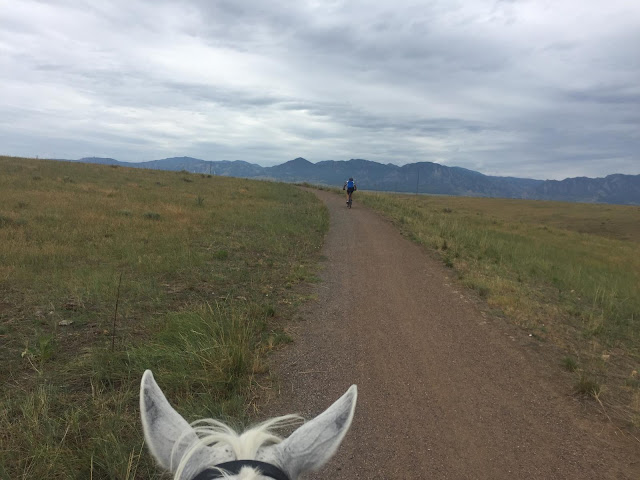 We came to a huge uphill and Ashke wanted to race/run/canter.
There was a guy who had passed us a few moments before by almost riding up Ashke's ass, and got pretty snotty with us about getting out of his way.
I'm the kind of rider that tries to move off trail when I know there are bikes or runners back, but this guy gave us no indication he was there.

I let Ashke go after him.

He panicked a little bit hearing us race up behind him. I slowed Ashke down and gave the guy two switchbacks of trail and then we went after him again. Ashke really opened up that time. When we got up to him, I started hollering WHOA, like Ashke was out of control, but in reality, Ashke slowed as soon as I asked him to. The guy on the bike was standing on his pedals trying to gain speed to stay in front of us.

J and A were both laughing to hard to ride. 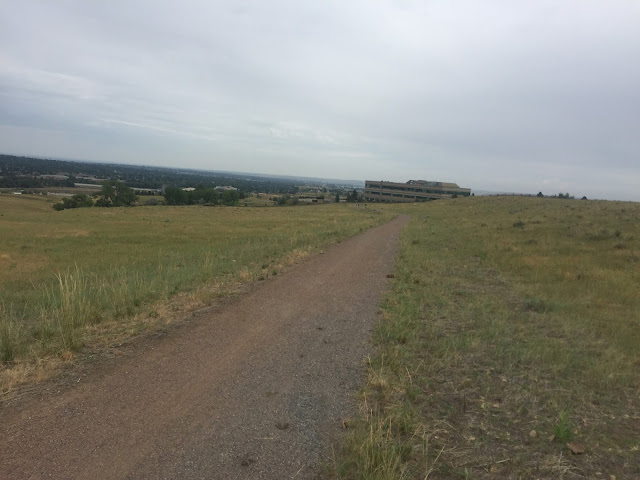 That big building in the back ground was the turn in the switchback.
Ashke had a nice little run.

When we hit Coal Creek Trailhead we were about half way through the ride and it was almost 2 pm. A was beginning to panic a bit about getting back in time. I told J to go, since waiting for Ashke and I was what was slowing them down. The trail from Coal Creek is a solid uphill for almost three miles. Ashke and beat them up that, by once we were on top of the mesa, they caught up. 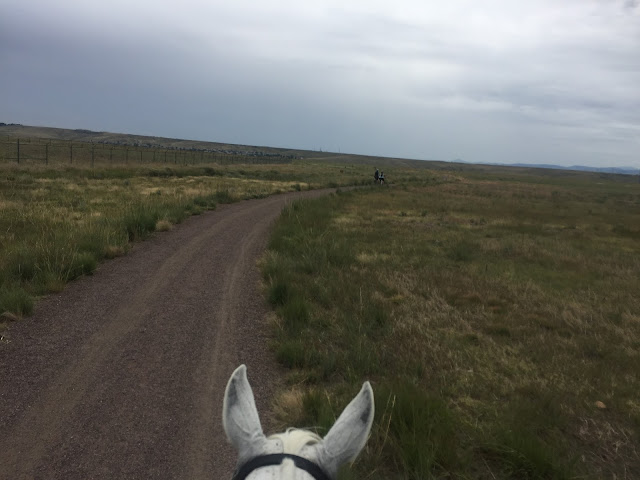 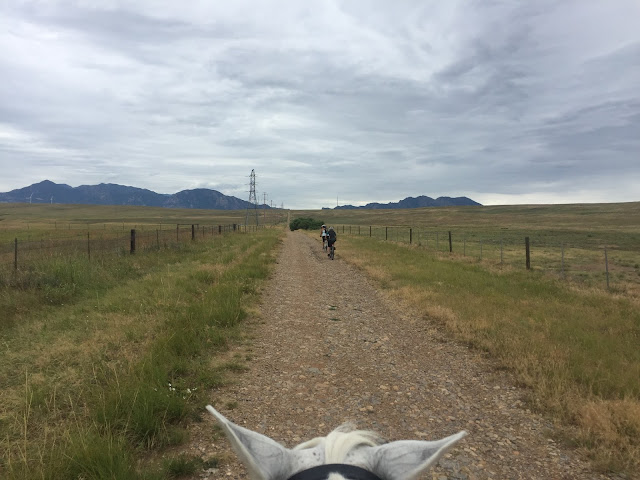 On top of the mesa. 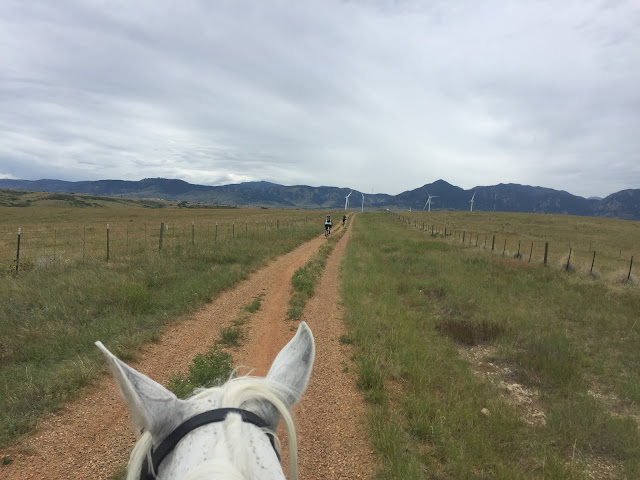 The last I saw of them.

I called J to tell her how to get back to the trailer. They had reached the hwy by that time and opted to take the road, which probably saved them 30 minutes. I told J to leave the trailer with the cooler and my lunch in the parking lot and take A home. I figured I was almost an hour away from the parking lot at that point and no longer had a need to hurry. We just walked the rest of the way, taking time to stop and drink from the cattle waterhole just off the trail.

When I got to the trailer, I unsaddled, got Ashke set up with his hay bag, his bucket and water, then pulled out my chair and sat down to eat my tuna salad for lunch. I didn't even have time to open the salad when J was back.

We managed 16 miles in about four and a half hours, which included a number of breaks.