The Unbearable Lightness of Being

For several years now, the first ten steps after I get on Ashke for the first time are short, stiff and kind of stumpy. Add to the stiffness in his front legs, he also short strides on his right hind. It can take about half an arena to a full arena circle to loosen up his short front legs, or maybe the first five minutes on trail (it happens there as well). His right hind can take up to fifteen minutes of work, and we always do the movements that add stretch to that part of his body when I am in a lesson (lateral work, shoulder in, haunches in). Once he is stretched out and warm, then we move to the more difficult things. The stretching exercises always help with our canter transitions, etc. 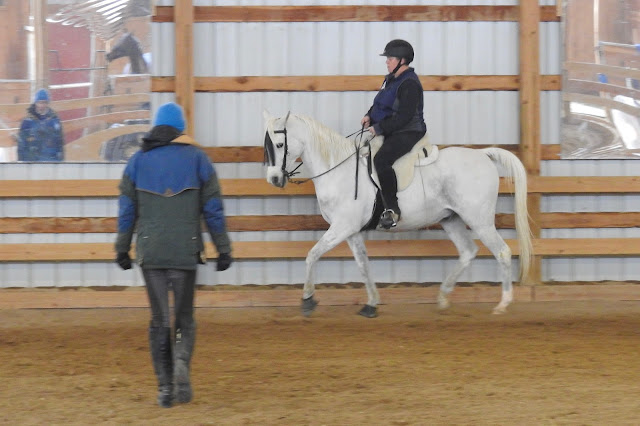 Pretty picture to disrupt the text

In addition to the stiffness in his front end, Ashke is also very girthy. He always has been. He maintains a good weight, is wormed on a schedule, and doesn't show any other signs of ulcers, but a month ago I treated for ulcers to see if it made any difference (going to a Total Saddle Fit girth did). There was no difference in his behavior. I was talking to my good friend, CS, and she told me of a fascial release she was shown by a medicine woman that she uses on CO that might help Ashke. We were finally at the same place with our horses at Expo and she showed me the release.

It is behind his elbow on his front legs. You use your hand, with the pads of your fingers toward the horse's body and reach in behind his elbow. Back up in there is a tendon that feels like it runs from the horse's withers, behind the elbow and toward his chest up under his body. Once you find it, pressure is applied (like a trigger point) until the tension in the tendon releases. The tendon on Ashke's left side (where the girth is tightened most frequently, although I do try to alternate between the two) was two and a half fingers thick. The one on the right side was not as bad. Additionally, CS pointed out that the rings on the TSF girth (for side reins) were sticking straight into the soft tissue behind his elbow. J helped out and removed those immediately. I finished saddling him and took him to the warm up arena at Expo. For the first time upon mounting, he was able to step out without trying to pop up in the front or step stiffly off his front end.


It was amazing. I do the release on that tendon on both sides during saddling, then soft stretches with his front legs to make sure the hair and muscle is smooth under the girth. He has been so loose and relaxed stepping out the mounting blocks. 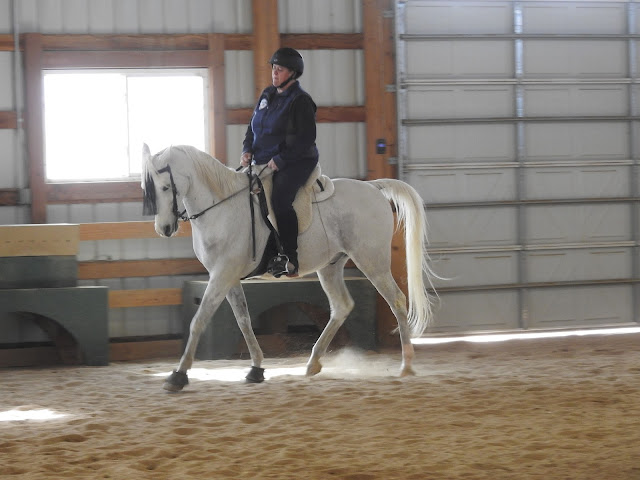 I wasn't sure what to expect when I got Ashke out. He was a little spooky about the saddle and definitely blew out his abdomen while I was girthing (we had an incident on Sunday I will write about soon that has made him convinced his saddle was going to eat him). I finished getting the saddle girthed and stepped on him.

He was incredible. I could feel the difference in his gait immediately. He felt more relaxed and ready for work than he had in the past after fifteen minutes. Not only that, but he felt light. Bright. Happy. Connected to me with lots of energy. No frustration or pain. He felt like he had been set free. Amanda said he looked like he was traveling straight on the right hind and carrying himself much better for the first steps of a ride.

We worked on a lot of canter. Transitions. Turns. He was able to give me much better bend in both directions. Had a sticking spot with the right lead canter, although when he started to get upset I verbally reminded him that he did not have to be perfect, we just had to try. He tried very hard for me. We worked on mostly canter for a solid thirty minutes, until I could feel weakness start in the right hind and then we moved onto trot work.

We had just started the extended trot work when the wind picked up outside, throwing waves of sand against the outside wall of the indoor arena. Ashke was very uptight and we opted to end the lesson rather than trying to fight our way through spooky weather (gusts bad enough to blow over semitrucks on the highway). 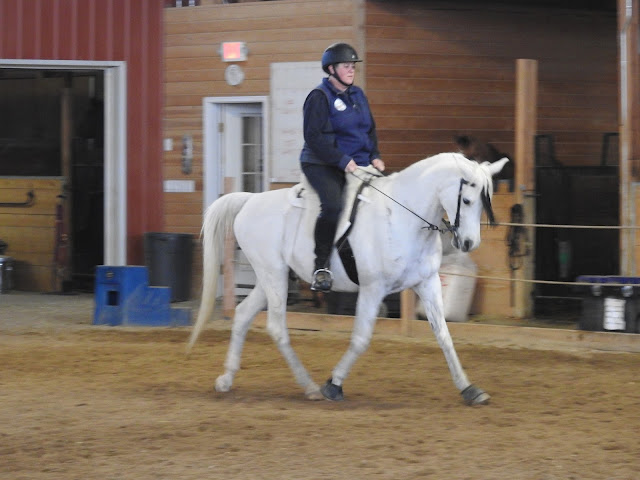 I think the work that Tracy did on Ashke had a huge effect. Yes, I was looking for a change, but I was also hesitant to jump the gun until I was actually on him. He felt better. We felt better. He was calmer and less reactive to my aids. Better bend. Overall, a better connection. I think that all of the energy work plus the physical work Tracy did may have completely resolved the issues we were dealing with. He flat out moved better last night.

That said, I don't think we could have achieved that release in 2013, when I first met Tracy at TMR. I don't think that he trusted me enough to let it go. Plus, I've talked to him a lot about his issues around his gelding, reinforcing my belief that we would not be together if he had not been gelded (his answer to that during our session with Tracy was that he would have found me either way). As important as my work in desensitizing him to touch around his sheath and scrotum and my conversations with him surrounding these issues, I think it even more important that he developed trust in me. The kind of trust bank in him that would allow him to believe that he will be with me forever, that I see him as a radiant, whole being, and that neither of us could ever betray the other. This was that moment in our journey when he was finally ready to move forward (hence all of the articles thrown my way) and when he would actually be receptive to what both Tracy and I offered.

He was almost unbearably light last night. Our dance has truly begun.