Tuesday was the day we moved into the Event Center barn, into a double stall for Ashke and a separate stall for tack and feed. We started the day with a visit to the High School where we had a serious conversation with the boy about school, graduating early, and adulting. He decided graduating early and being expected to adult at seventeen vs taking a cake schedule (he only has one required class and can do two student advisor periods, if he wants) as a senior and still having mom cook breakfast and make lunch for him, he decided the cake schedule and still being a teenager was a much better option. After the meeting, we went home to pack up the stuff we would need for our first day at Expo. Part of that included a quick trip to Joann's for some stretchy elastic to make boot straps for the pants I had finally decided on.

So, in backing up, I tried on outfits on Monday night. Mom had finished the Spanish jacket I had asked her to make for me and I had received it the prior week. The jacket was perfect and both looked and fit really good, especially when I was on the horse (I wanted enough room to move my arms without the jacket pulling tight). All I had to do was find the right shirt and pants. I tried the purple shirt and the new breeches I had purchased. 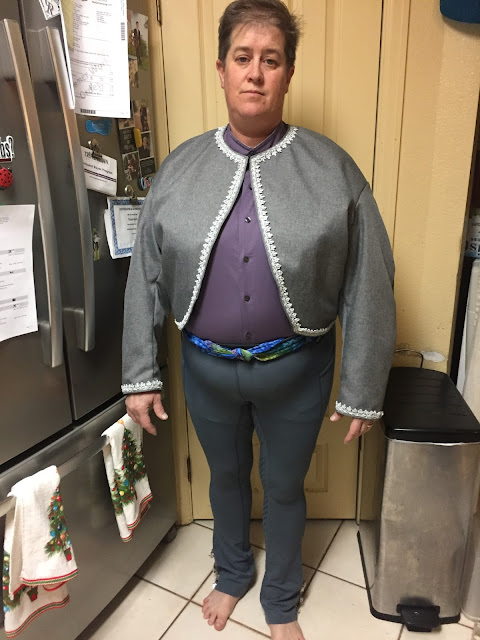 Not as happy with how it looked as I expected I would be.

After much consultation via texting with Saiph, I ended up with this: 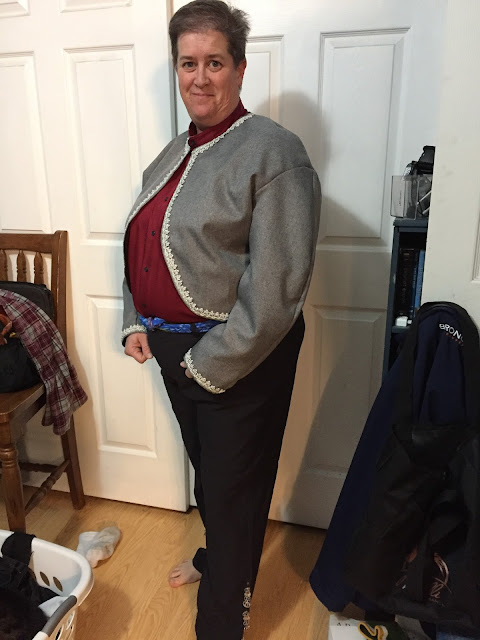 I changed the shirt and the pants and was much happier.
I moved the new carieles to the darker pants, added boot straps to keep the pants down, and we had our outfit.

We loaded all the things into the truck, then drove to Agfinity for shavings and Triple Crown Senior. Then we headed to the barn to hitch the trailer and load the rest of my things. Ashke was very interested in what was happening, being all prancey and arabiany between the stall and the trailer. He loaded pretty quick and we headed for the Expo. 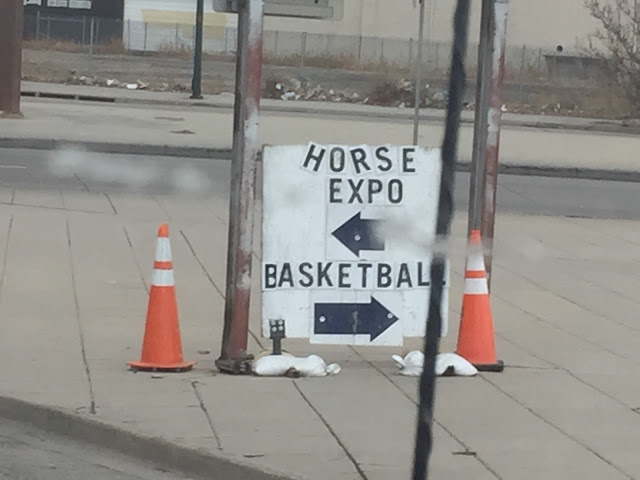 This was the sign outside the Coliseum on the sidewalk at the highway exit ramp. It made me chuckle every time we went past it. I checked Ashke into the stalling office and confirmed our stalls, then moved in all of the things.
Hay net filled with hay, a muck bucket filled with water (holds about 30 gallons) and his first feed of TC Senior. We let him spread the shavings throughout his stall, since it is his favorite. 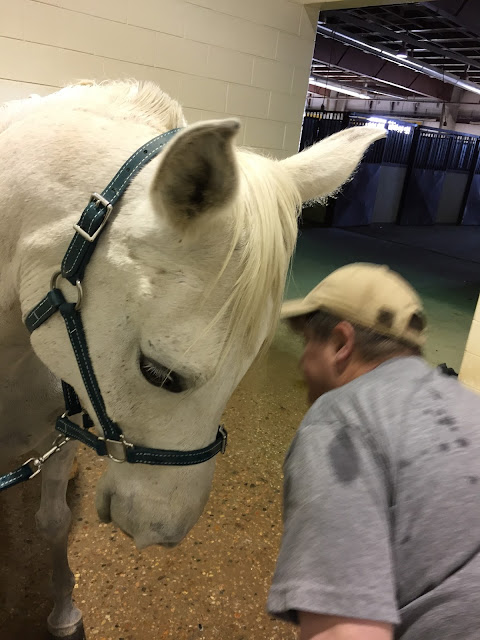 It has only been five months since his last bath. I've been looking forward to washing him with the warm water the Expo has more than anything. Really. The show was just an excuse. 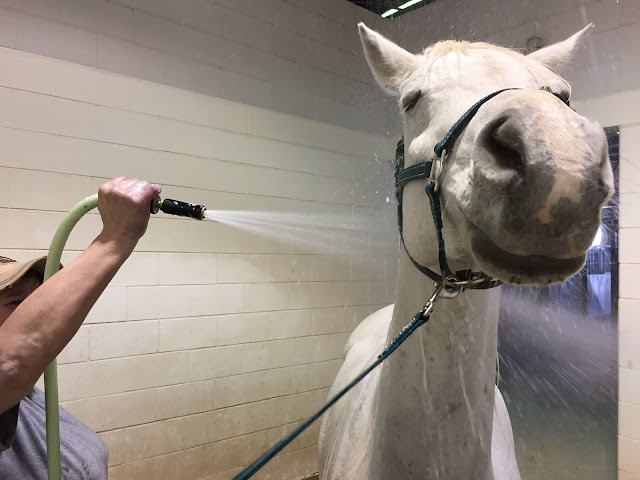 He didn't hate it. 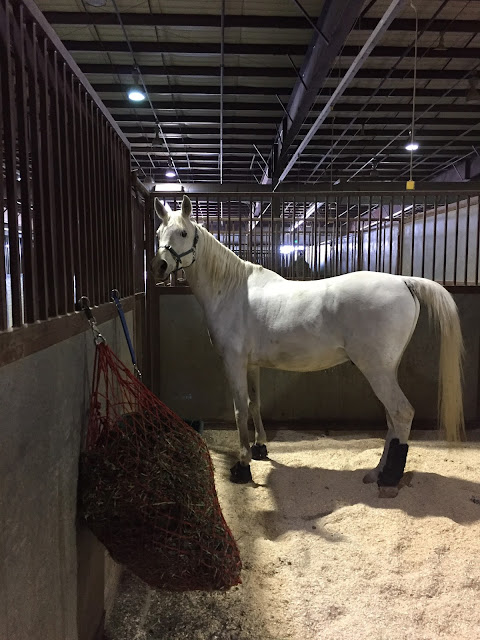 The dressage arena got delivered at about 1:30, so J and I went out and helped set it up. I think I need to devise a laser beam system for setting the walls of the dressage court. It is almost impossible to get a rectangle built that's square. We sectioned off part of the arena nearest the barn for our warm up and set the arena at the other end. We stacked the obstacles against the far wall until Thursday. With a two day show, we did dressage on Weds and EOH + Speed on Thursday.

On Tuesday night, Tarrin did two clinics. Ashke and I rode in the second one. We mostly worked on transitions. Tarrin made a really good point that over a period of four to six minutes we could do 40 to 60 transitions in our EOH phase. Even during a lesson, I'm not doing that many transitions and certainly not that many in that short of time period. If we don't do a lot of transitions, our horses will never be strong enough to do all of the transitions they need to do in a show. I have committed to doing at least a thousand trot-canter or canter-trot transitions between now and my next show. In each direction. Especially to the right. Our right lead was an issue, as was everything, in our EOH phase. I can do transitions on trail, they don't have to all be in the arena. But it is something we really need to work on over the next four months.

Then we each rode our test. I rode the Novice B test and there were some things that Tarrin had me go back and reride, but for the most part there was a lot of good in the practice. Even my geometry was decent. And Ashke was soft, responsive and light for me. Our change of lead across the diagonal was solid and very soft. It's too bad it wasn't that way the next day. It's not riding the test that is a problem, it's the show environment. I get tense as soon as I ride in the arena and that makes Ashke really tense. I'm thinking a hit of pot or a valium might be in order fifteen minutes before my ride. Not enough to make me stoned, just enough to take the edge off.

I was feeling very proud of myself at the end of my clinic with Tarrin and totally ready for the next day. 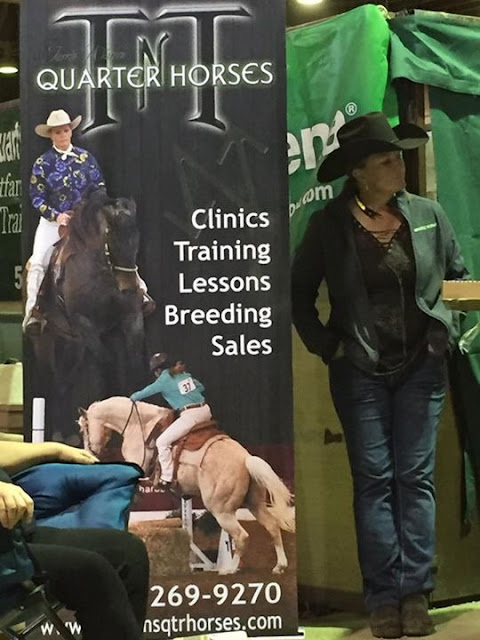 Tarrin standing outside her promotional booth in the barn area.

After the clinics we celebrated J's bday with cake that C brought. It was yummy and a great way to finish off the day. My WE group is pretty awesome and it was great spending the week with them.
Posted by Cricket at 2:02 PM