I have to say the best thing about the show on Wednesday was Amanda Moore, my trainer. That was the best decision I could have made. She helped me before and after the show with Ashke, she helped me with warm up, she read the test (even though I had it memorized) and was very supportive after our major melt-down in the arena. The only thing I feel badly about is that we didn't do better in the ring, because I wanted our improvement to reflect positively on her training.

We got there early on Wednesday (a bit before eight) and I helped J set up for the show. She is our show secretary, so she is in charge of all of the things. I wasn't showing until after lunch, so I was able to sit and watch some of the other riders. I ate some lunch before heading out to get Ashke ready, with Amanda helping me. 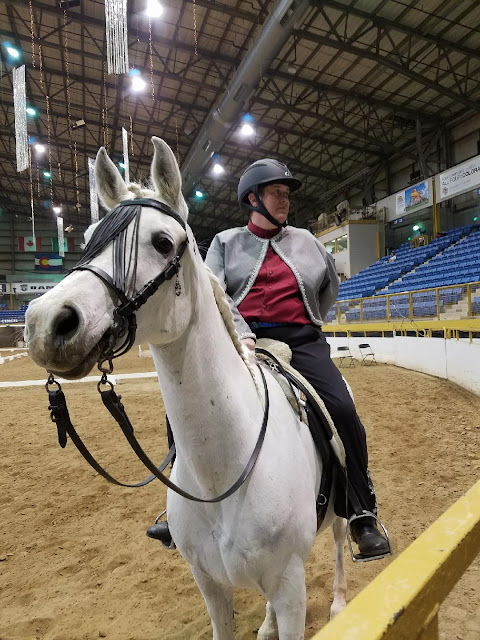 Ashke and I in the warm up ring.

We rode for about 45 minutes in the warm up arena, doing transitions and leg yields, some shoulder in, just working on staying relaxed and responsive. Ashke was so soft and responsive. We were flowing around each other like melted butter. Our canter transitions were smooth and he was so relaxed. And then we were called into the arena and all of that went out the window.

Both Amanda and my friend D said they could see the change in my shoulders as soon as I crossed out of the warm up arena. Ashke felt my tension and immediately got tense. It went downhill from there.

I rode Novice B Amateur.

I had my rides professionally video taped. Then I edited them on my Mac and added the scores and comments from the judge, so you can see what we did good on and what needs improvement. As an FYI, a score of 5 is satisfactory and the equivalent of a 6.0 in Competitive Dressage. This is also the first year that half points were awarded. To qualify for the National Championship, a rider must score a 58% or higher. I know you are all in suspense, so I'll let you off the hook: I did not qualify for the NC. Maybe in August at our second show.

I had the same issue that I have had in early shows, even if we start off solid we kind of fall apart in the last few movements of our ride. By the time I am on the last few movements I'm like "Gods, aren't we done yet?" My geometry needs help in pretty much all the areas. I need to try to figure out how in the world to get him to halt square. I just want to know what I need to do differently so that becomes a solid answer every time we halt.

But, there were some things we did really well at. I am proud of our leg yields and the turn on the haunches was solid. If we keep working on those things, they will get better and better. I know that we need to work on the canter aid and transition a thousand times between now and our next show. Tarrin's comment of how many transitions we do in an Ease of Handling class really left an impression. For moving up a level, I was not displeased with our performance. I felt the scores were more than fair and we ended up where I expected.

It was the first time we did the leg yield and the half turn on the haunches in a show, which were our strong point, while the canter was, once again, our downfall.

I talked to Tarrin on Wednesday night at dinner about how to relax before riding the dressage phase. She says she sings to herself, which I can do, a song that gets stuck in her head so she is concentrating on that rather than on her ride. I think as I continue to ride in shows, it should get better. I really wish I could find a way to ride in a show the way we ride together when we aren't in a show. I need to be a better rider for Ashke because I'm not being fair to him. I need to figure out how to dance in the arena with him. That's my job. His job is to do a thousand trot-canter transitions. And to learn how to do a correct and solid haunches in.
Posted by Cricket at 2:51 PM