Our house, in case you missed it, has a huge neon sign hanging right out front, with big spot lights and flashing lights and spinning lights and buzzers and horns and whistles. It says "Please leave all unwanted, or uncared for, unneutered cats HERE!!!" Only people with unwanted, unneutered cats can see this sign, which is kind of annoying, but they can see it from miles away and drive here to drop their cats on our porch.

I kid you not.

First, there was Siska, who came to us at about nine months old. Unneutered but obviously an indoor cat. He has white feet with black pads and he LOVES my son. He also has the soul of a dead Indian. He used to hunt the mice in our basement until he got fat and lazy. Now, he wanders around saying "bless you" every time you sneeze and knocking stuff off of the table for the dogs to chew up. We had him dropped on our doorstep in 2009.

Then there was Stazi. She was dropped into an empty dumpster at about two weeks old. Our neighbor heard her meowing, climbed into the dumpster and rescued her. She is J's heart cat and barely tolerates the rest of us. T, she hides from, unless he is very slow and calm (not my son's forte). She lives under our bed, sleeps on our dresser and rarely ventures down from the upstairs. Sometimes she plays racer kitten in the upstairs by herself, sounding like a herd of elephants as she races up and down the hall. This is quite the feat, considering she weighs about 2 pounds. We got her in 2010.

Then there was Mia. She was about six months old when she showed up on our doorstep. I think there is a very good possibility she and Stazi are half-sisters. We forced gave Mia to Tia (see, they were meant to be together). Having two young female cats didn't seem like a good idea at the time and considering we had four dogs, four cats and two bearded dragons in a 1000 square foot house (plus three people) just seemed like too much. That was in 2011.

We asked the universe to stop giving us cats. Instead the universe gave me another rescue - Ashke. That was 2012. Then in December of 2012 we lost Joey. Three weeks later, Spike, my heart dog, went to the Rainbow Bridge. The house felt so lonely without our pack, so we added two: Lily and Skittle. They weren't rescues, but it was darn close. We got them at 10 weeks and they had never been out of the house. They are a mixture of fear-aggressive and timid and have taken a lot of work to comfort and support. They have turned into great dogs, but we are very careful about the situations we put them in. And I would not recommend walking into our house uninvited. That was 2013.

This year we lost my Preacher. And we rehomed the dragons. Our colony of dubia roaches became infected with a colony of small gnats. The gnats killed the male roaches and the colony died. (The gnats came from some pelleted beet pulp I put in their box.) After the fiasco of losing the colony, plus the increased heat in our house from the lights and heat bulbs, we decided to rehome them. Hopefully, our electric bill will drop significantly and all of the annoying little gnats are gone.

The universe must have decided we were open to taking in another stray. He showed up a couple of months ago and after finding him outside our door a couple weeks running, I put out some food. Gradually, over the past couple of months, he has gotten friendlier and more affectionate. 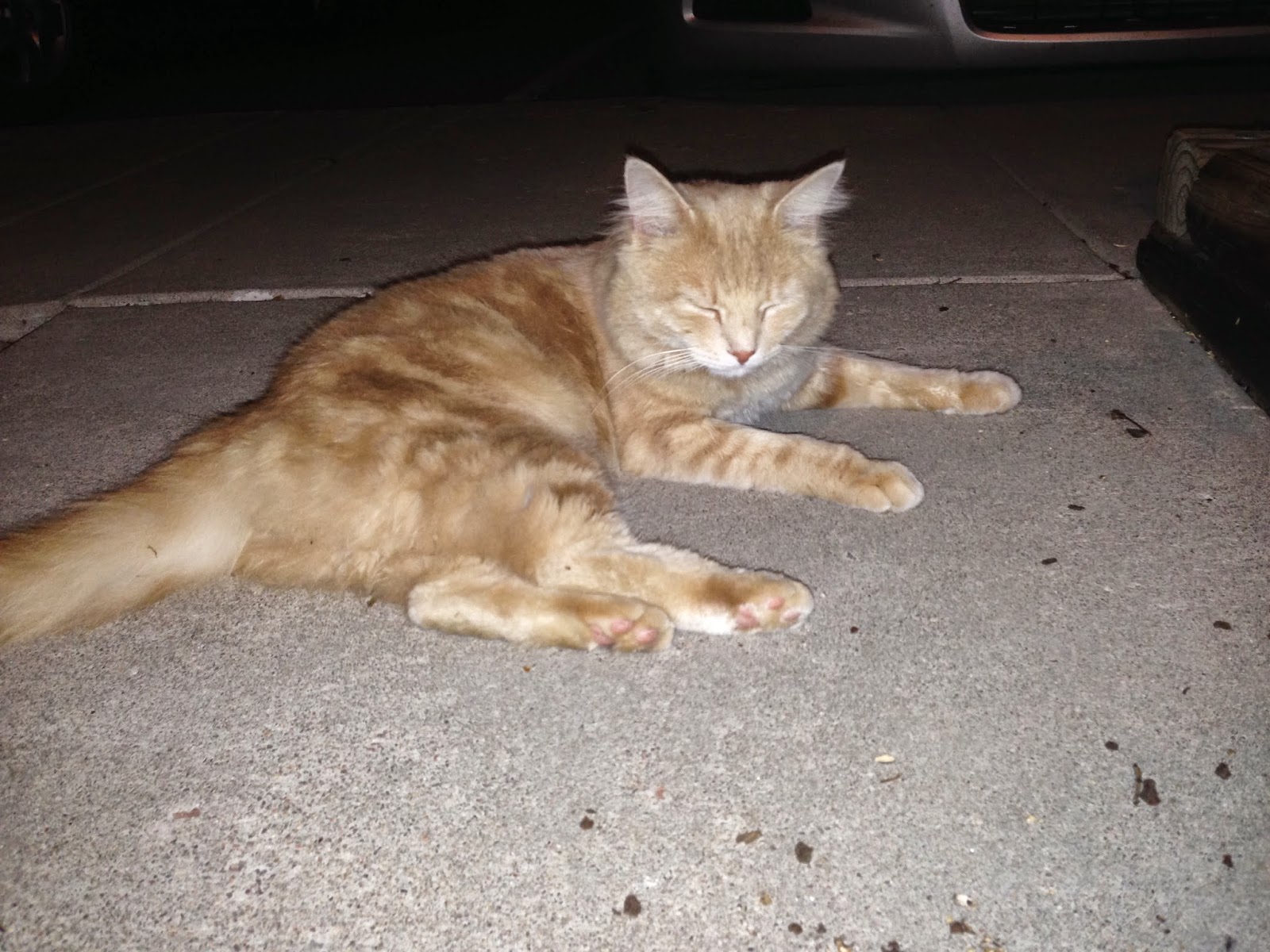 At first he laid on the sidewalk just out of reach. Then he began to seek our attention, coming up for scratches and pets and belly rubs. J started calling him Peaches, until I informed her that he was a he. Then she called him Mr Peaches. He never responded to that though. We tried to bring him inside, which resulted in a huge fight between him and Stazi, in which blood happened and Stazi was less than pleased. We booted him outside, but committed to getting him fixed and feeding him. We talked about constructing a small cubbyhole for him to hide/sleep in so he would have shelter during the winter.

Then it rained. For three days we had gloomy skies and pretty consistent rain coming down. Peaches, as we were calling him, asked to come inside. J got him situated in the basement storage room, with crunchy food, a clean litter box (which he uses without any issue) and soft food twice a day. We got him fixed through a spay/neuter clinic put on by the Denver Dumb Friends league for free. Then we waited to see what he would do. 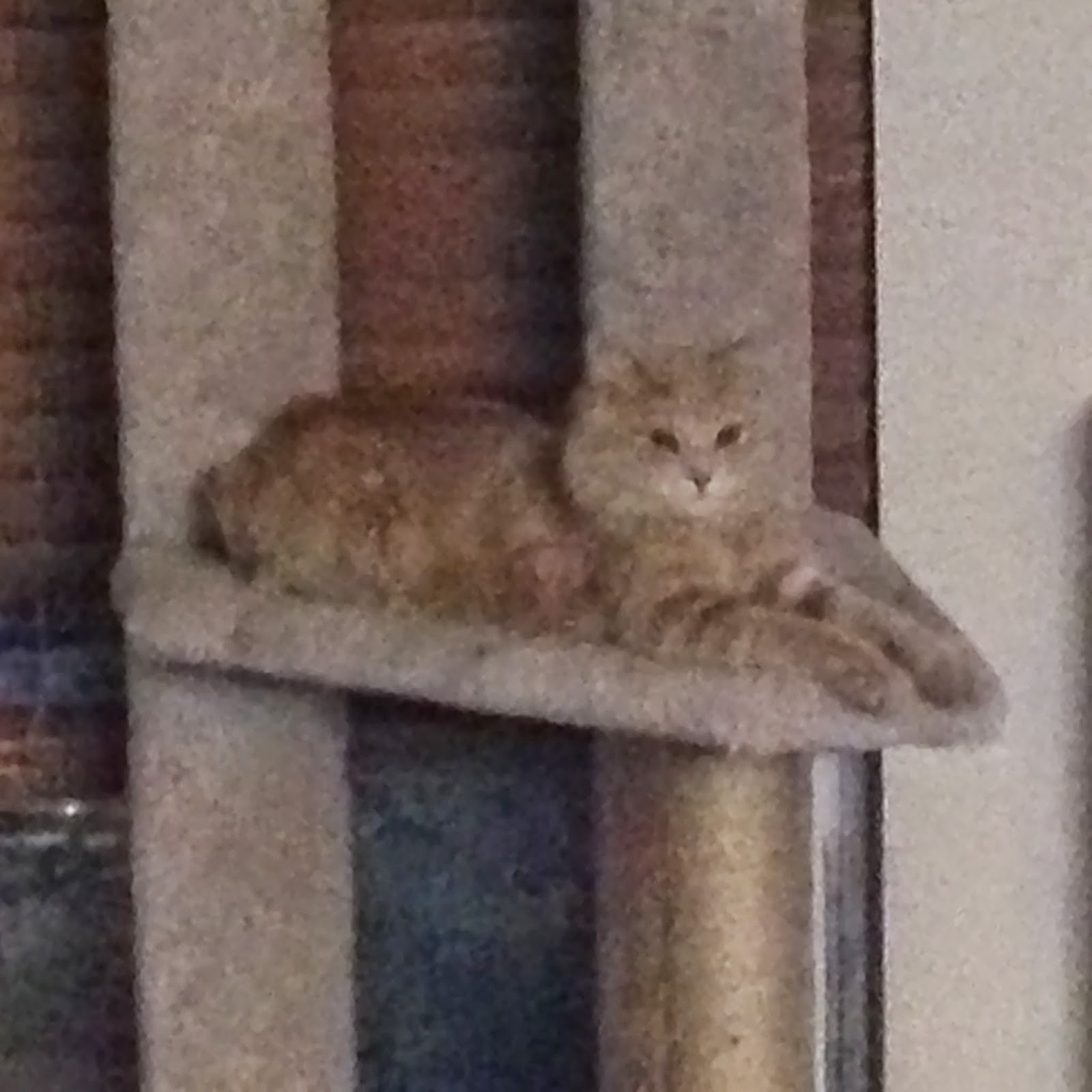 Meet Squeaker (he named himself and the dogs call him Squeaker, so . . . ). He has decided it might be okay being an indoor cat. He still goes out in the morning and the evening for 20 minutes or so at a time, but he always comes back in meowing for attention. (He squeaks). 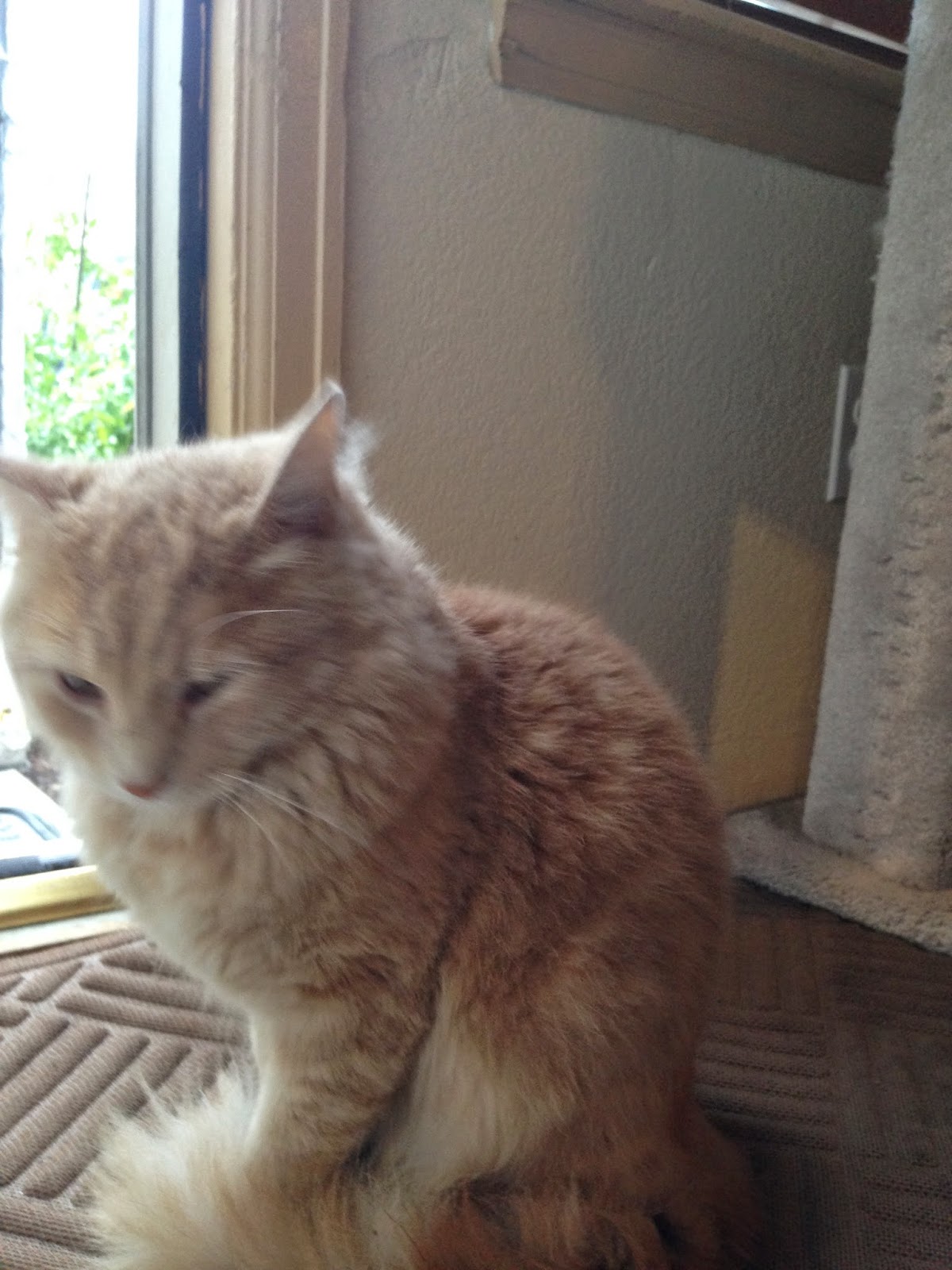 He lives in the basement and haunts the living room for now. We have always had easy integrations, but this time it is going to be more difficult. For one, he has lived on his own for a while. Two, he is a lot more territorial than our other cats. Three, he likes to bait the dog.
Lily has a fascination with cats. She is learning but it is a difficult process. It is not helped by the fact that the cat will chase toward her, hissing and spitting and doing that wailing cat sound that is worse than chalk on a chalkboard. Lily responds by snapping and barking at this wonderful new play toy that fights back. Since she is Malinios, and you have to be super careful to not let them chase cats, this is a trial for me. (Lily really only listens to me. And she doesn't listen to me when there is a cat around). 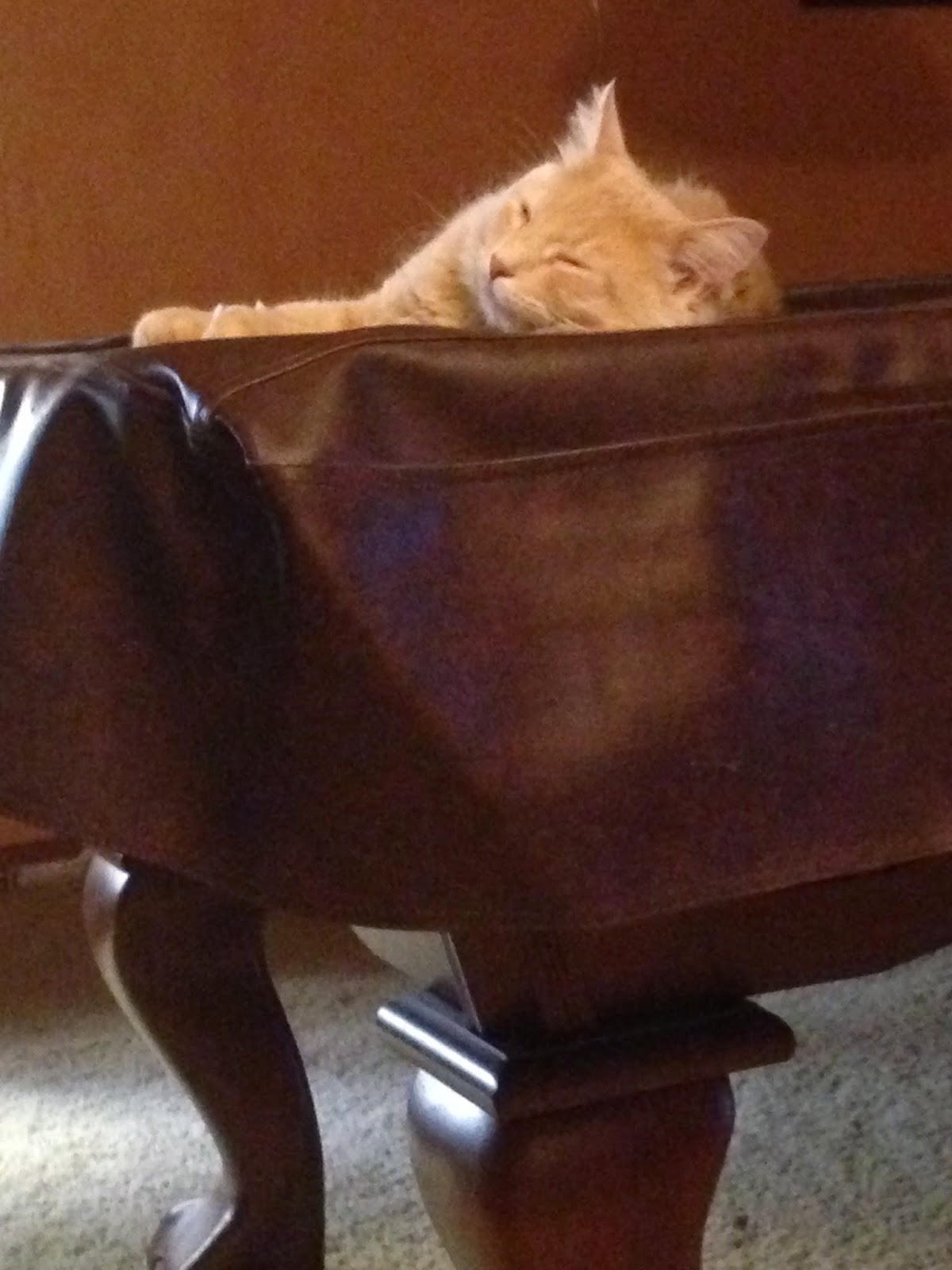 He is a sweetly affectionate cat. His fur is the softest I have ever felt - more like down than hair. He loves being pet and held. Our integration is progressing but we are keeping him away from the other cats until his aggression settles a bit. This morning he was on the pool table when Lily came in from outside. Squeaker pinned his ears and went after her. I really hope we can get past this. He's such a lovely cat. And yes, he is locked away in the downstairs storage room (lots of places to explore and the possibility of mice to eat) while we are gone. Last night we had him, us, all three dogs and Siska within a 300 sq foot space for several hours without any issues. It can be done.

I have told the universe we are closed to rescues again.
Posted by Cricket at 8:31 AM