We finally did a trail ride today. It's been hard to find mutually doable times to ride since before N went on vacation. Life is complicated by T starting High School, new schedules, Ashke's feet and Cali stocking up. N, J, Tia and I made it out to the barn about 10:45. It took us about 45 minutes to get the horses ready and head out. N asked if we could go slower today, partly because of Cali stocking up, and partly because N hasn't really ridden much in the past couple of weeks. She was a bit worried about Cali's attitude and she had reason to be.

Although we had agreed to mostly walk, we did do some cantering:


If you watch careful, you can see Ashke switch leads. Twice. The second time he only switched in the front, which is why we broke to a trot and then back up to the canter. He switches leads because he is trying to avoid the clover bunches in the field. The field is mostly clover. It makes for an interesting ride. He only switched the front going back to the left lead, because he is still in the habit of cross-cantering on the left lead to protect his right hip. The other thing that is important is to recognize that Cali is in front of us and he isn't trying to bolt or race. We have this cantering from behind thing mastered. 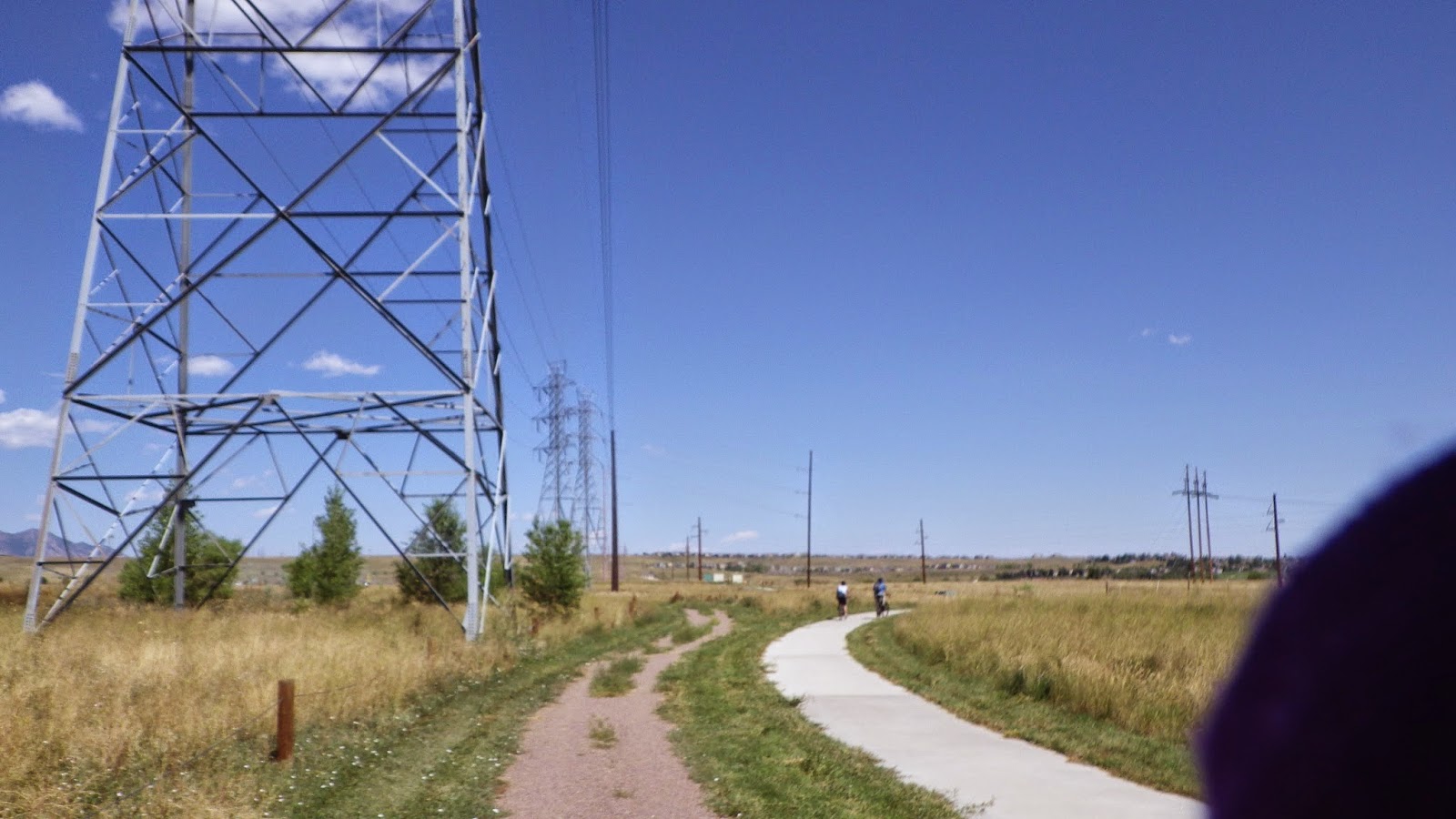 This is a part of the Fairmont trail, where we normally canter. Today we had a nice swinging walk going on instead. 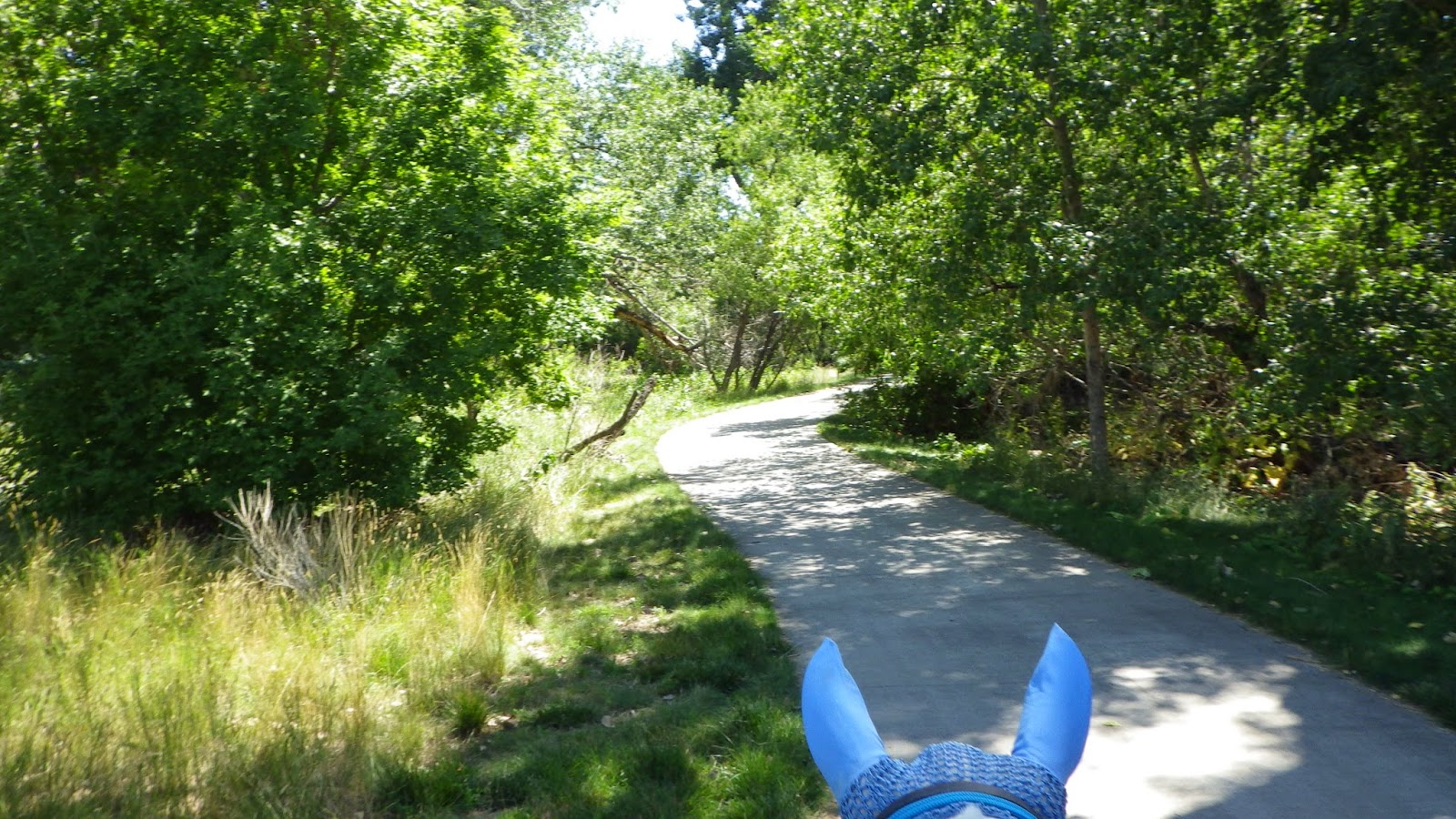 On the Fairmont loop, there is a place where the bike path splits and heads East. As we walked up to the bridge with the underpass, I asked J if she wanted to explore. She agreed and N was fine with it, so we turned East. 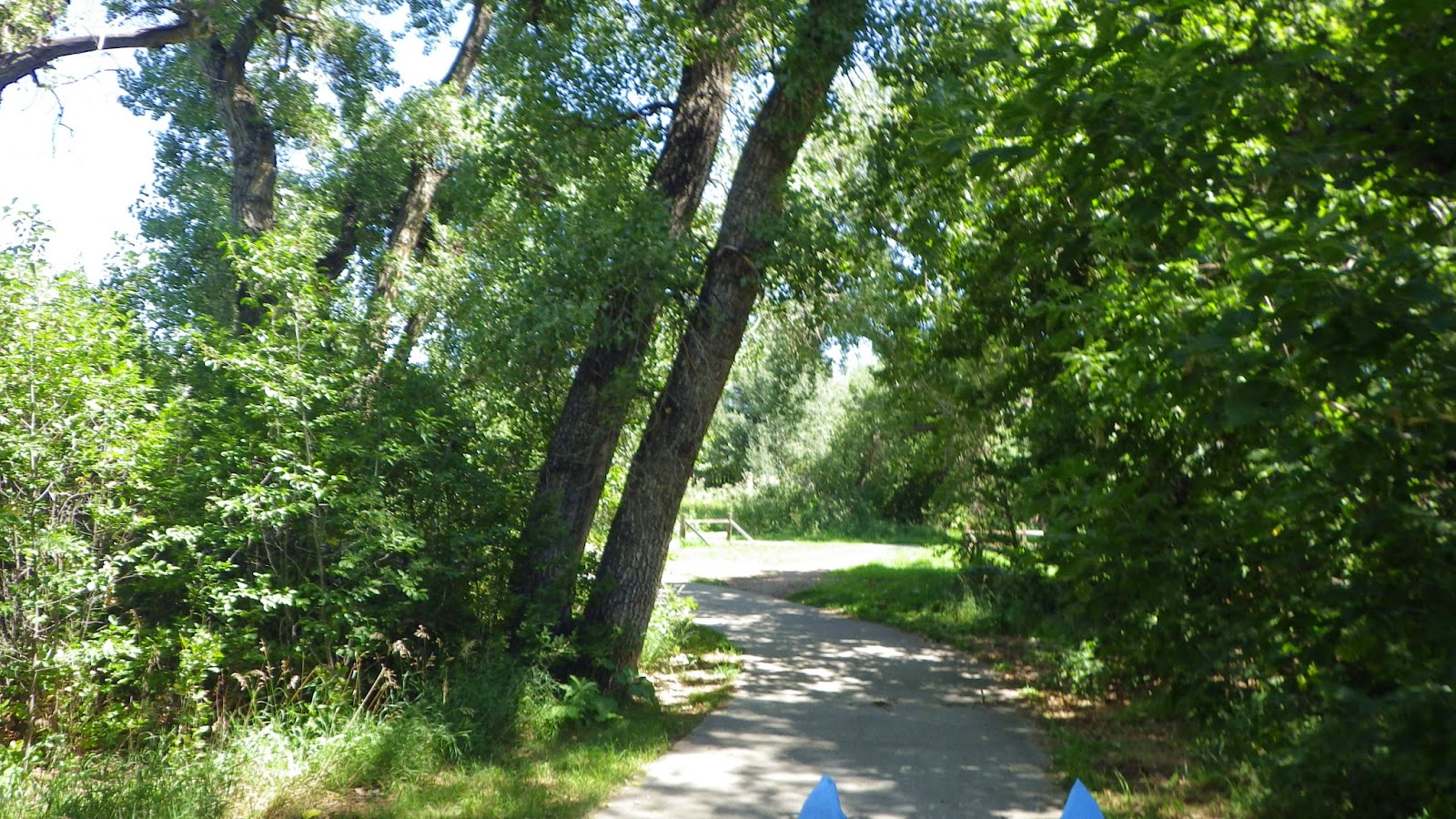 Most of the trail today was in the trees or with trees nearby. It's so green this year, even in August. 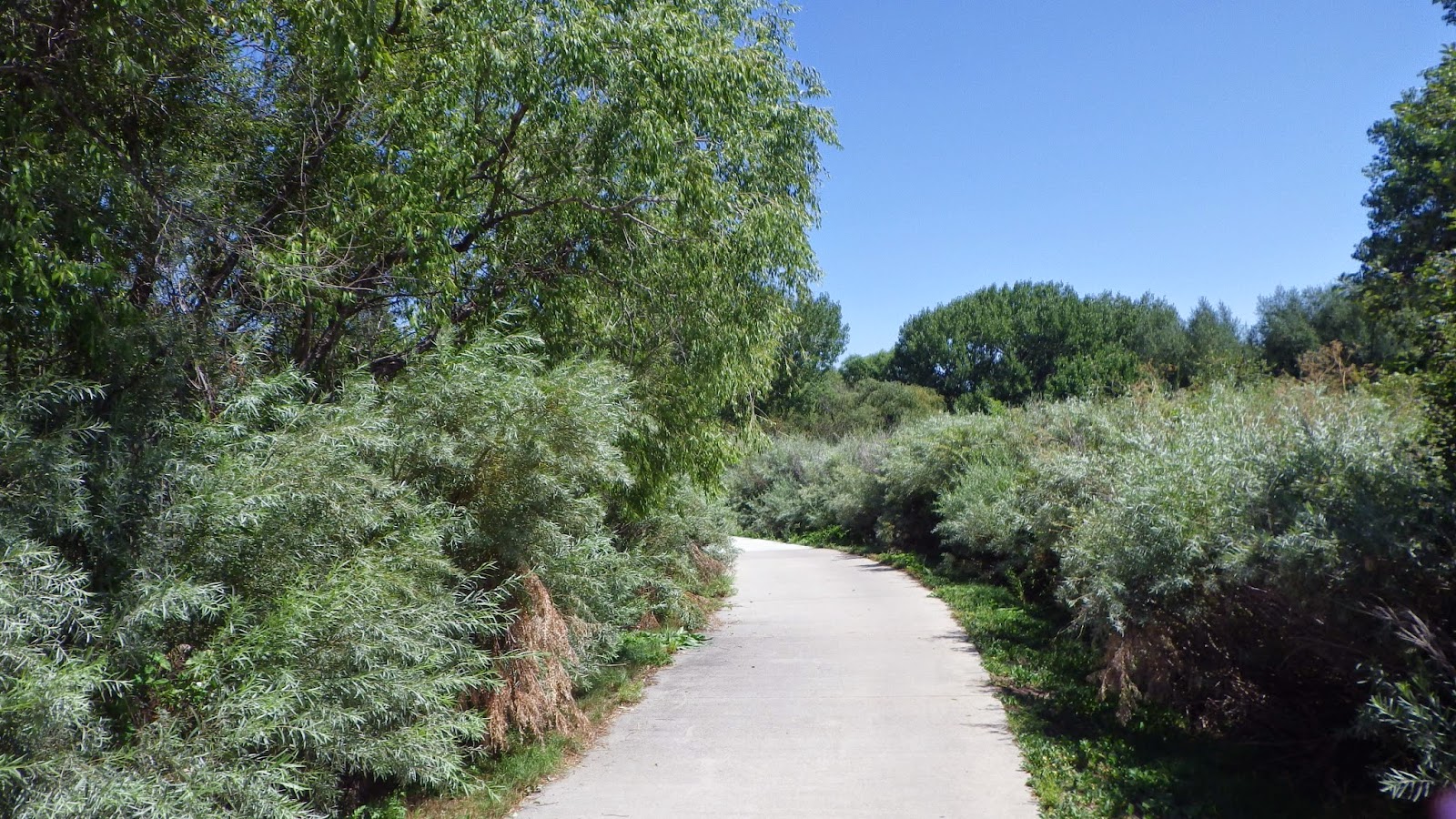 We rode between these huge stands of willow. I love willow. It's one of the sacred trees. I love the smell and the sound. Plus, you can make whistles out of the branches. 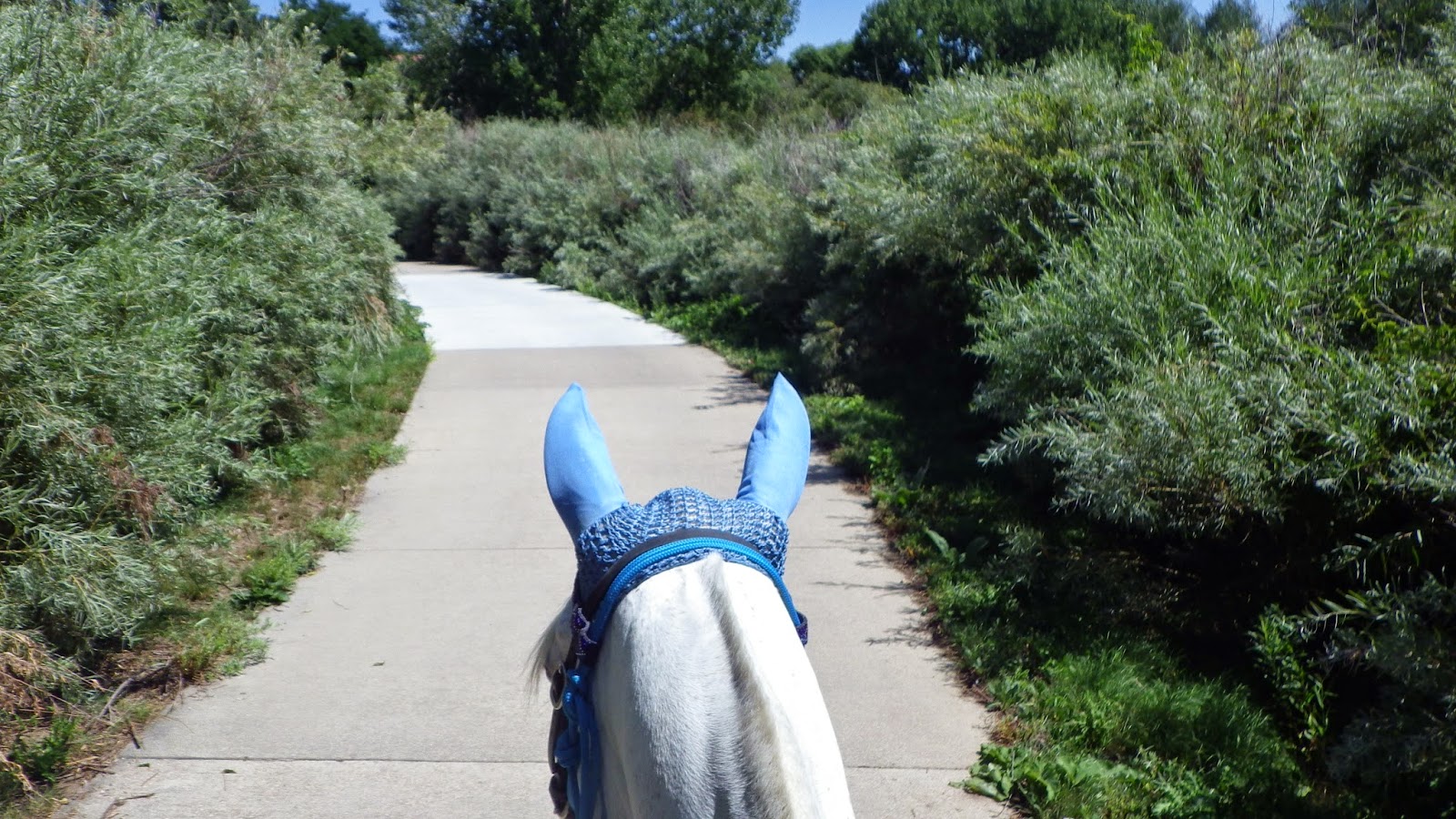 The willow went on for some time. It was magical. 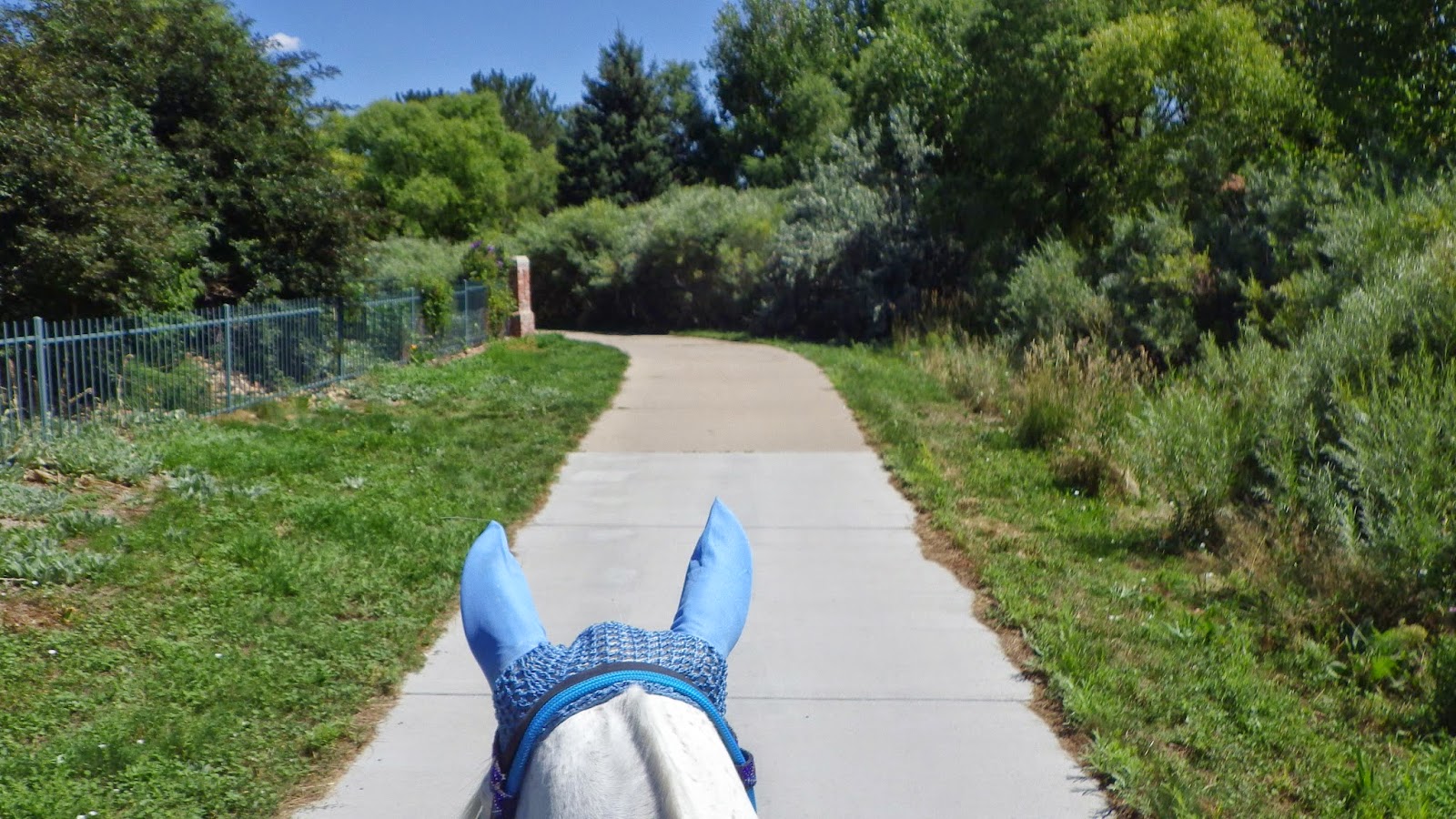 The verge was awesome and had great footing. I could see Ashke and I riding this at a much faster pace for a training ride. We only had two bad spooks. One was a little kid on his little bike with a freaking cow bell. The second was a guy in a recumbent bike with a multicolored flag. That one send Ashke spinning away, snorting in terror. The man in the recumbent stopped (thankfully) and allowed Ashke to inspect the bike and the flag. After that it was a non-issue. He went past us when we stopped to eat, and Cali had a pretty good spook, but Ashke just watched in curiosity as he went by. 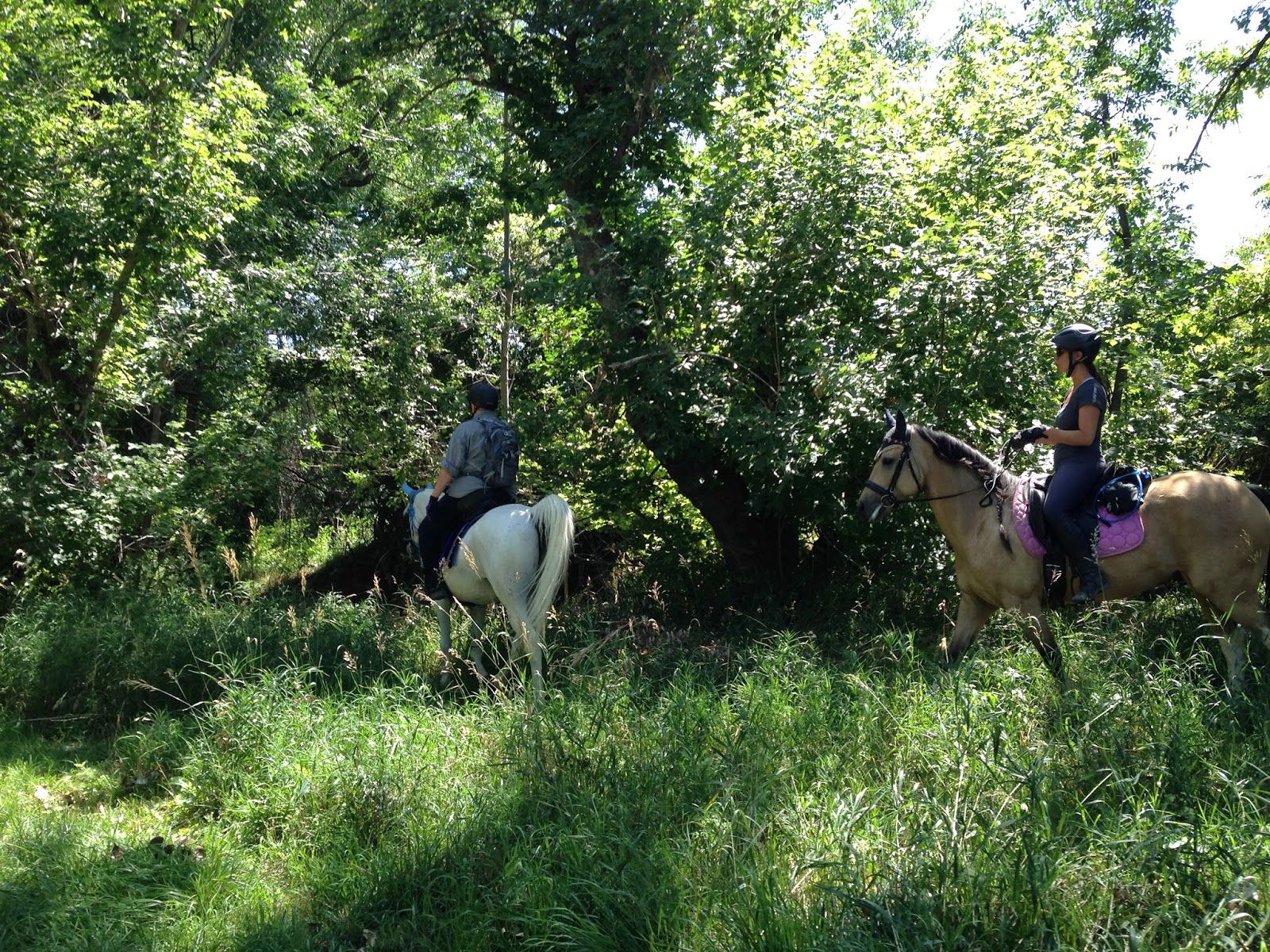 The ride was really wonderful. J and Tia talked their entire ride and J stopped to take pics. N and I chatted as we walked through the shadows and the sunshine 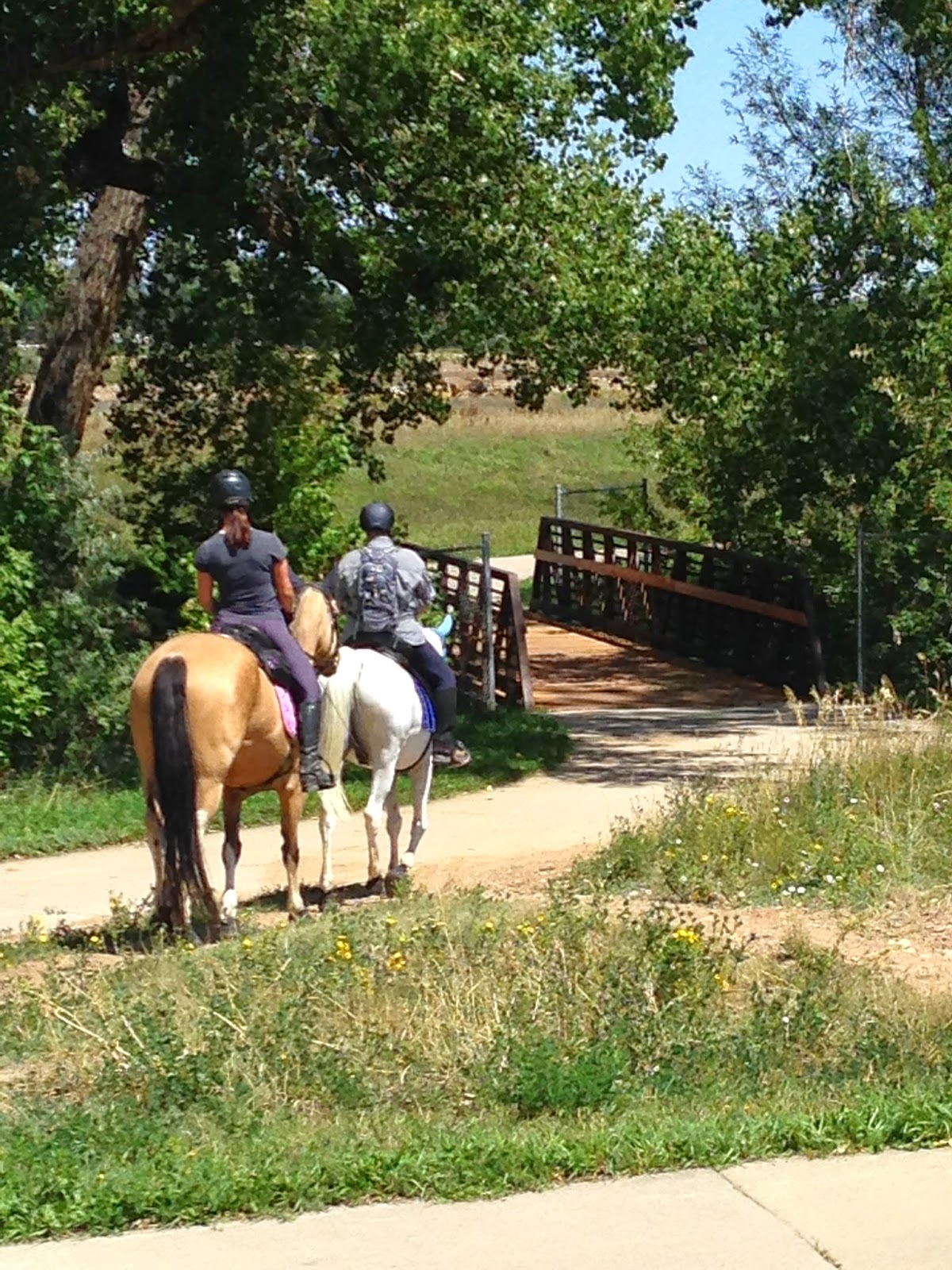 I got really smart. I have a set of cantle bags by Stowaway (thanks Saiph) that I let N borrow. The center compartment in the back has a fairly large area to it, but it is divided into two sections by some thin nylon. I cut the nylon and made it one big compartment, with three zippers allowing access. I then put N's camelbak bladder in it and zipped it in leaving just the tube out. I had to fold the bladder in half, but it worked. I then hooked the tube to the top of the cantle bags with a retractable key fob. This allowed N to reach back and pull the tube to her mouth when she wanted to drink, but held it securely in place while she was riding. She drank most of her 100 ounces of water while we were on trail. The only issue with the system is that you really have to suck the water up into your mouth, because there is no gravity feed. N is going to buy herself a set of saddlebags and I am going to borrow J's hydration bladder next time we ride. I want to see if it will work for me. 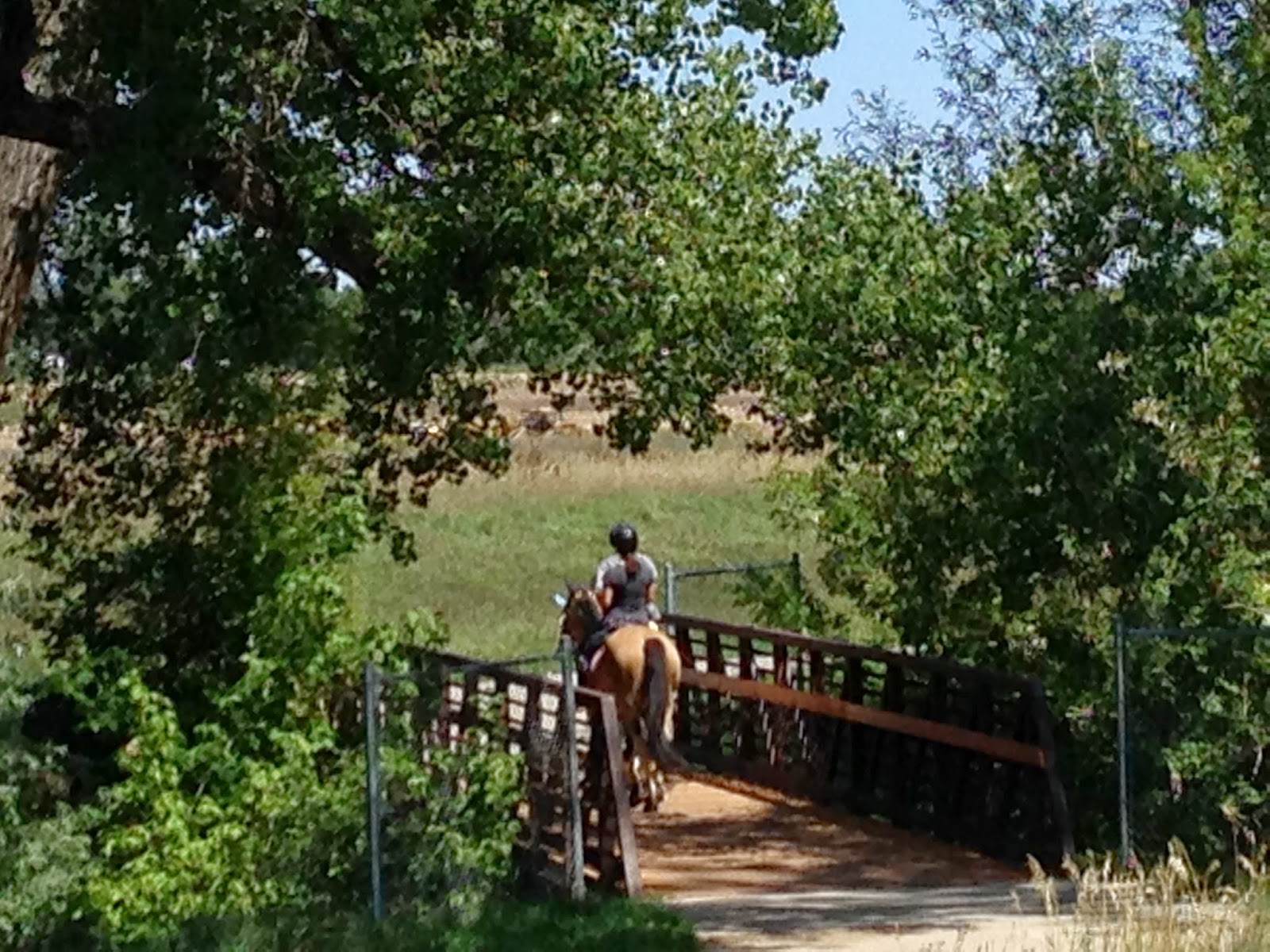 Part of the ride was along a golf course. It was very pretty. 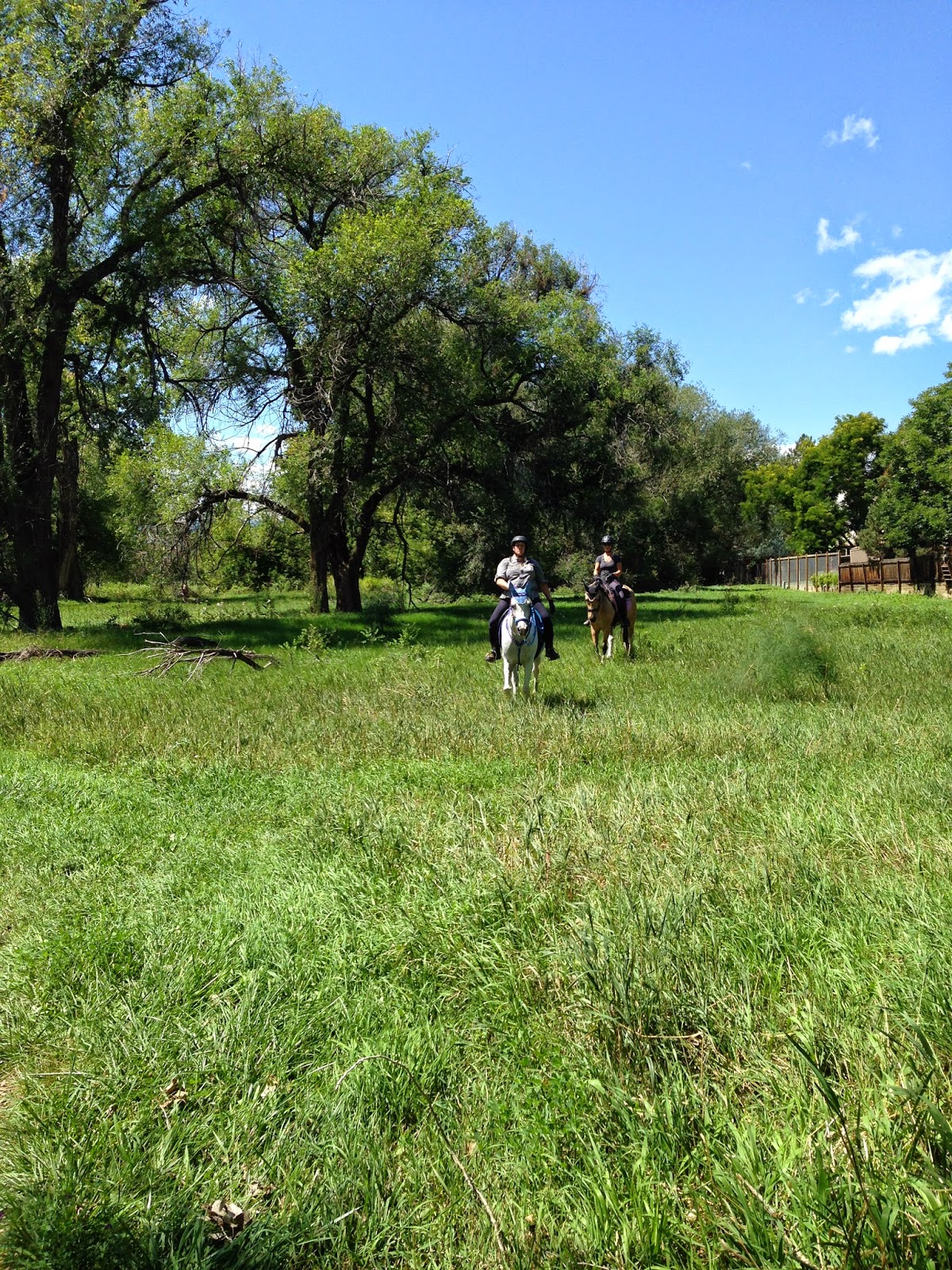 It was a very pretty ride 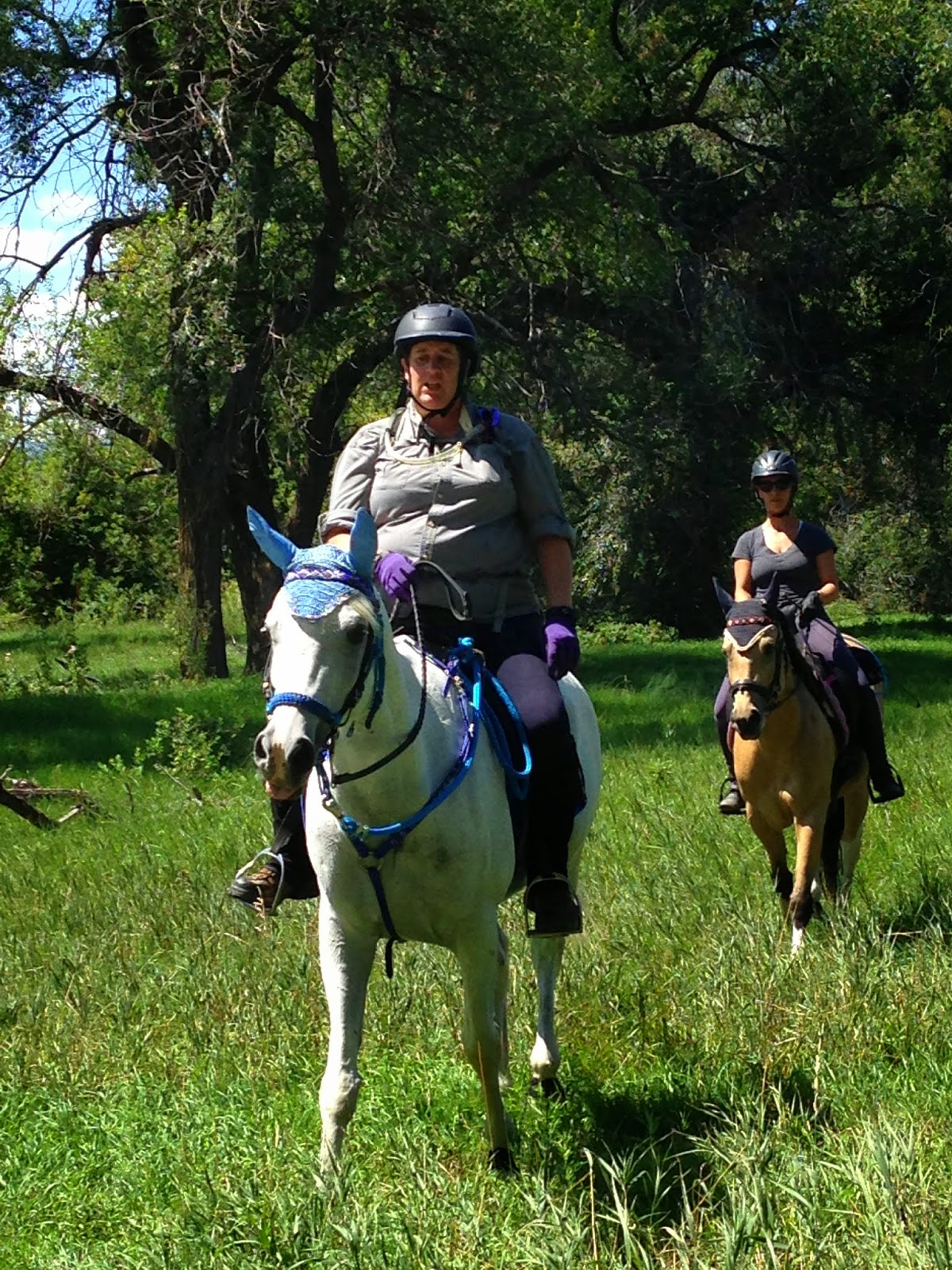 We were admired by several little girls. 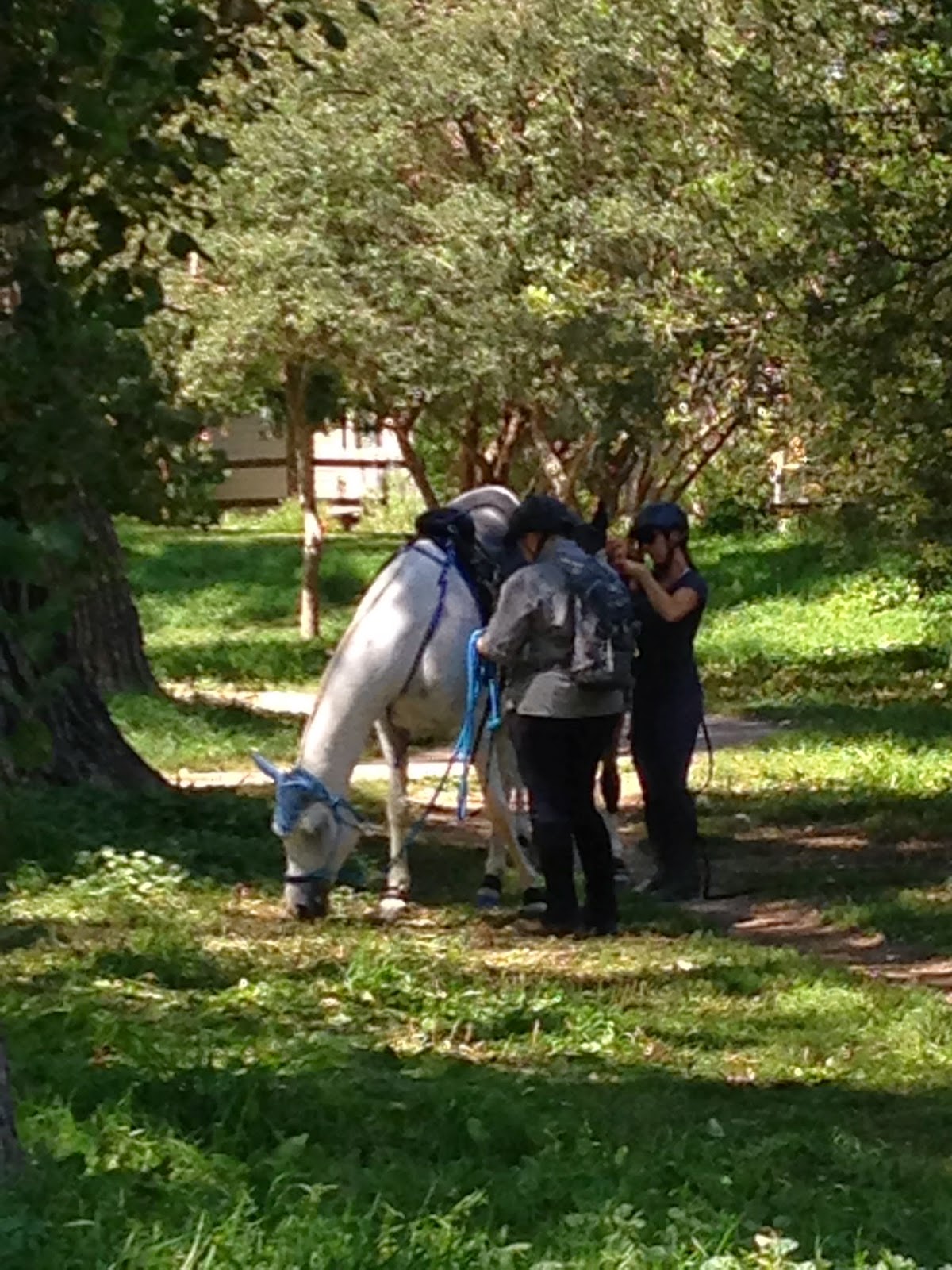 Finally, we stopped for lunch. Imagine my surprise in discovering we had ridden almost five miles in an hour and 23 minutes. We let the horses graze while munching on PB&J, chips, and fruit. 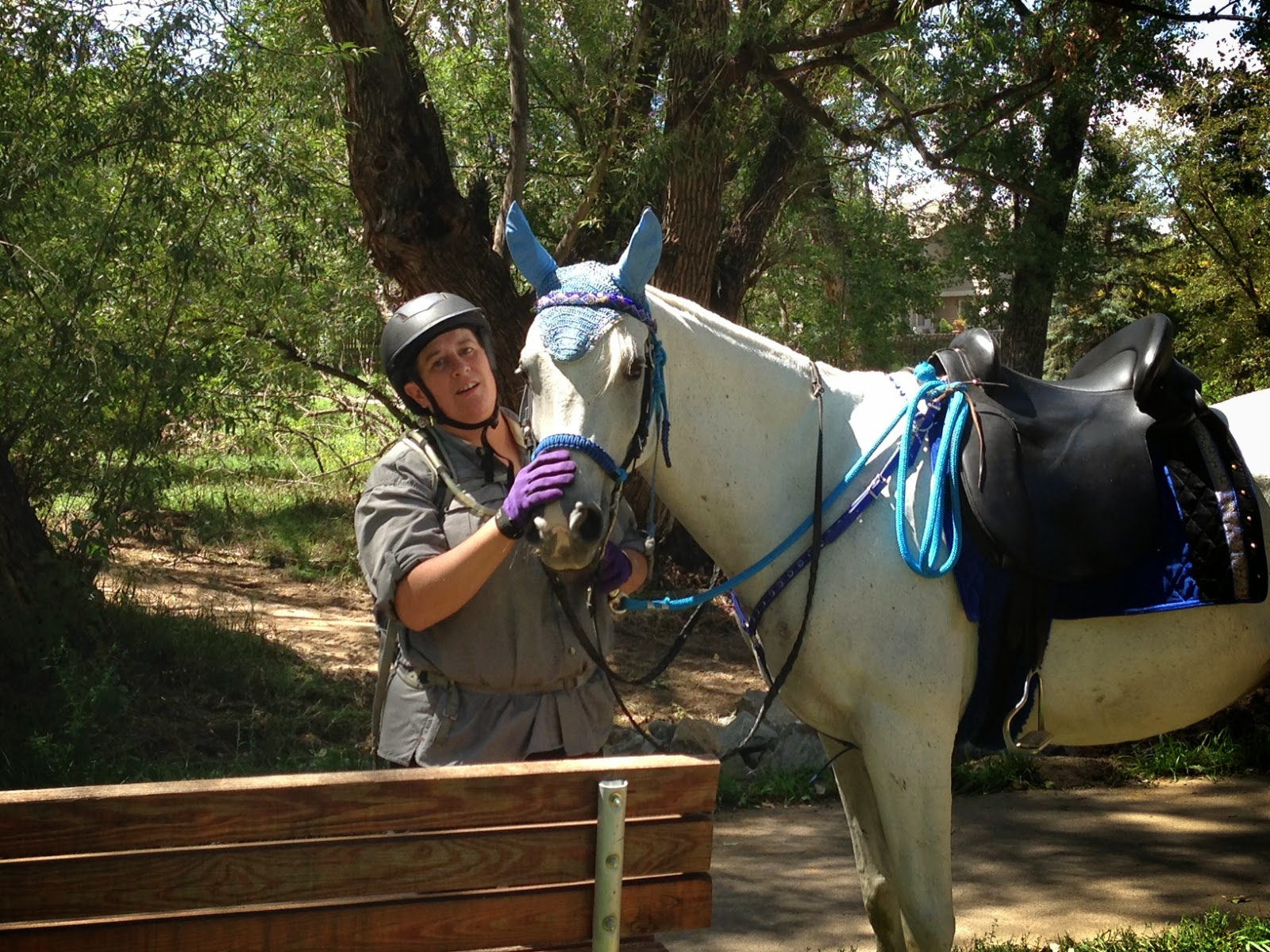 Then we headed back. I researched after I got home and I am pretty sure we could loop this ride. However, it would probably be 20+ miles. J and I might try it over the Holiday weekend. 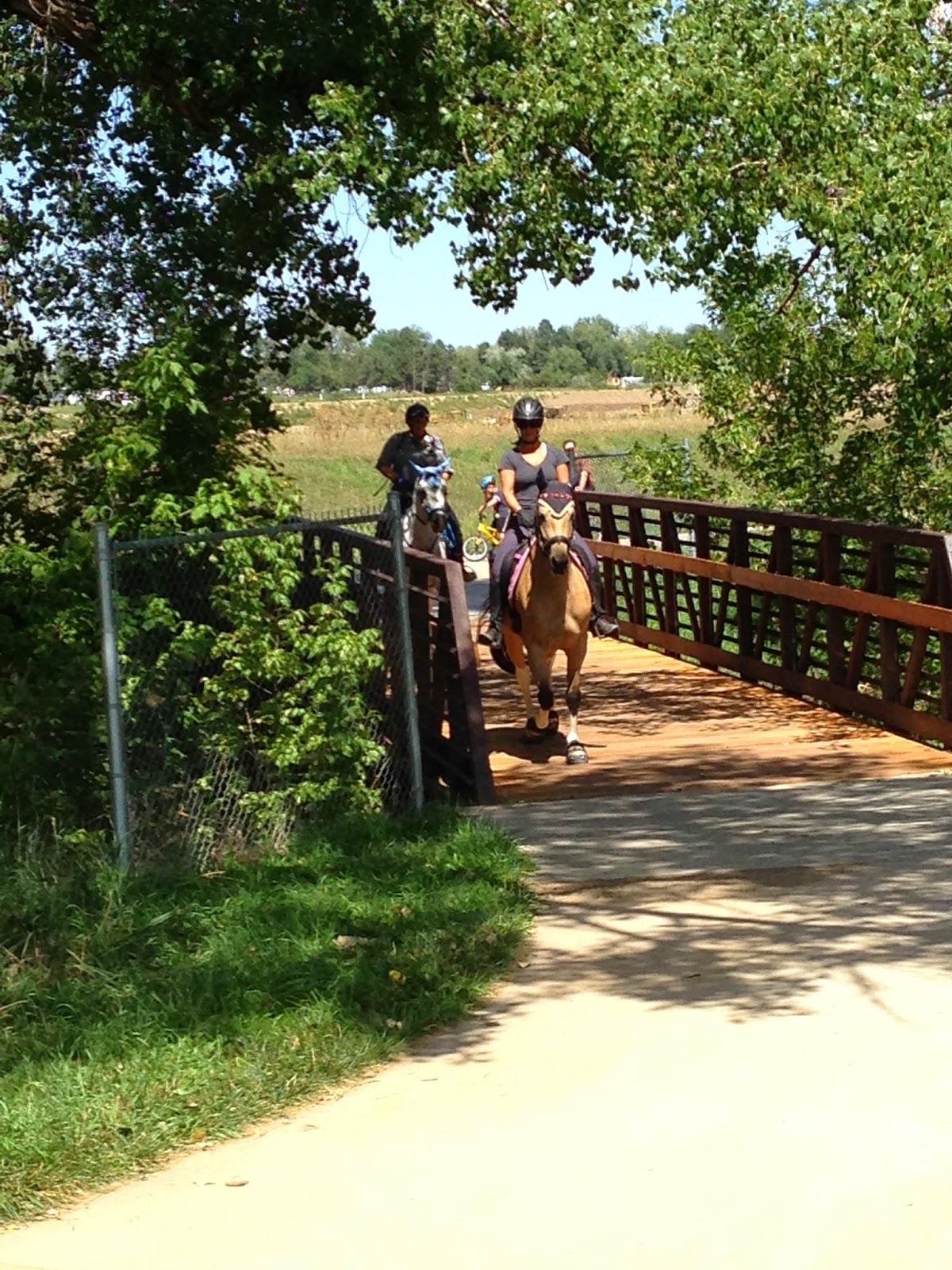 Headed back. Cali was incredibly forward and arguing with N the entire ride home. Twice she bucked on N; once at the crest of a small but steep rise and the second at a point where Ashke and I cantered off and Cali took exception. I guess the second incident qualified as Cali channeling her inner rodeo horse, cuz Tia said it scared the crap out of her and she wasn't sure how in the world N rode it. I've seen Cali throw some incredible fits and N just sits there serenely riding it out. I heard N shout and turned around to wait. Cali had to trot very slowly for a long time (Ashke walked his big walk and kept up with them) until her energy had burned out. 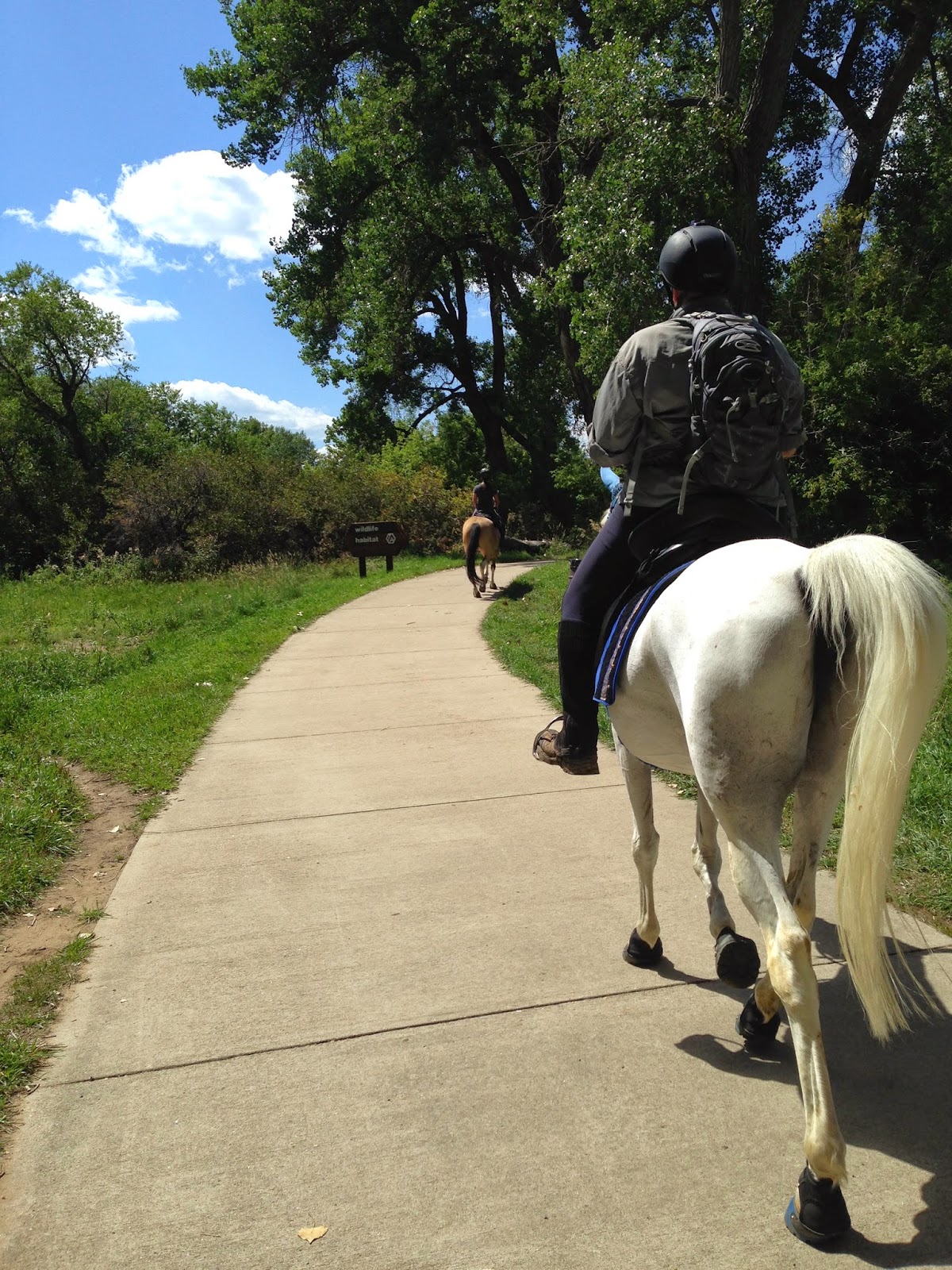 He's so chill now, even when she's in front. There is no dancing and no fighting and he listens. It is amazing. 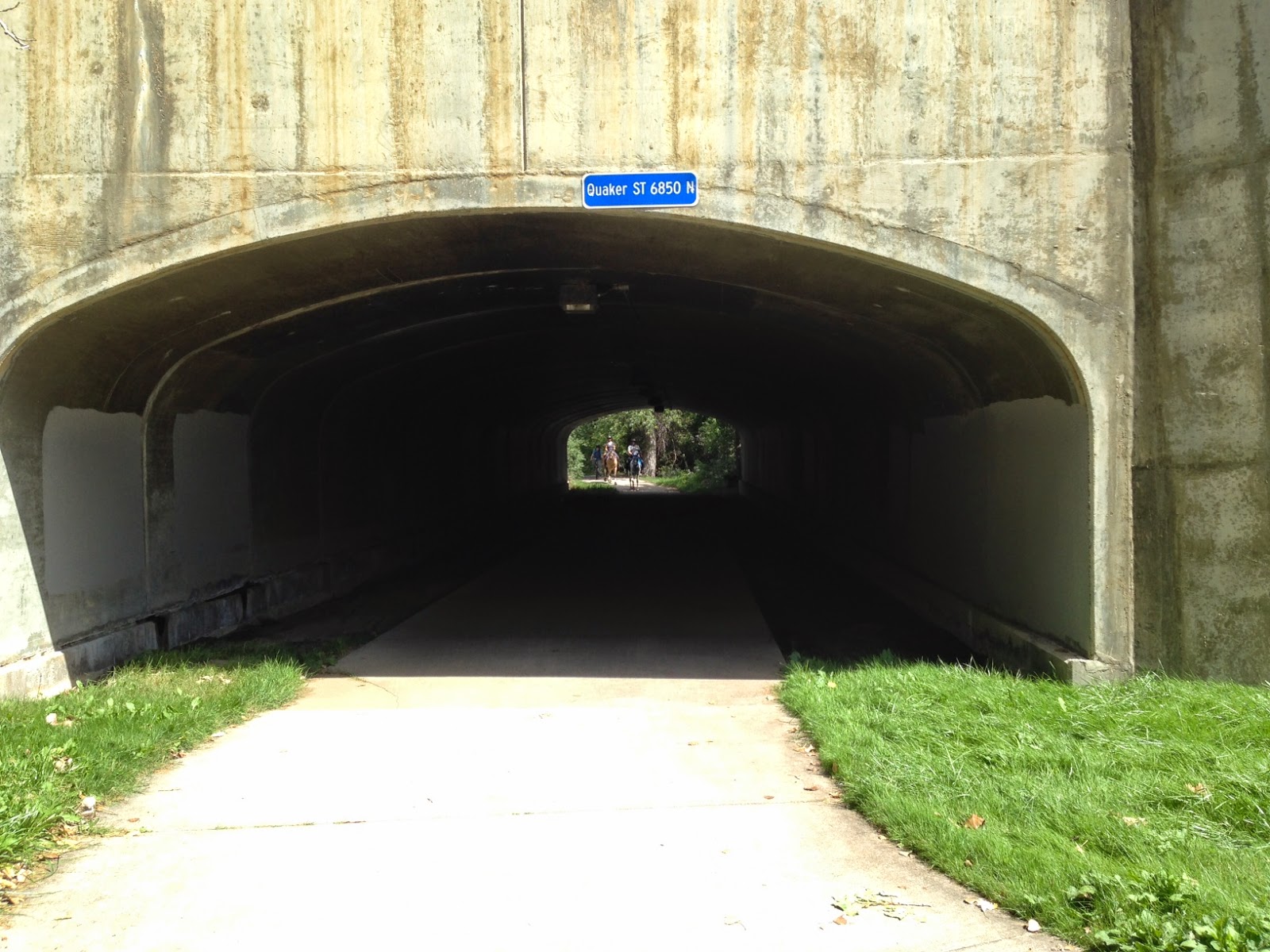 There were quite a few bridges we encountered. This one was nice because it was tall enough to ride through. There were two, however, that were not. As I rode up to the first one, my eyes were level with the bottom of the bridge. We went up to the road and crossed over, but the second one we had to dismount and lead the horses through. J said they were short enough she could stand on her pedals and run her fingers over the bottom of the bridge. It was very claustrophobic. 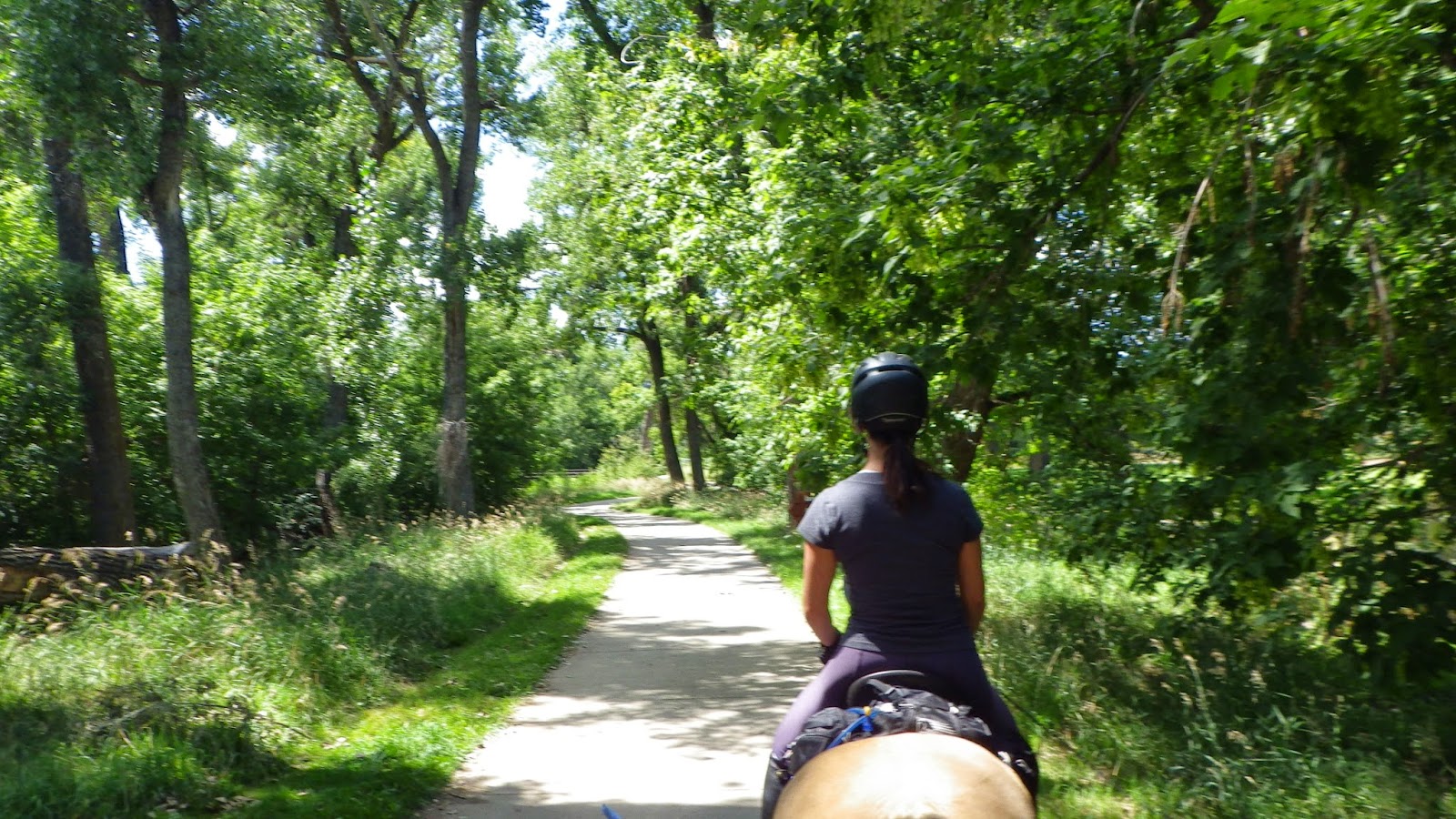 When we were almost back to the Fairmont there is a set of rolling hills on the south side of the trail. The grass is similar to that of the golf course, but a little longer and separated from the gold course by a wooden fence. Ashke asked to canter as soon as we reached the verge and I let him. We cantered up and then down and then up again, finally slowing to a trot to come down the back of the hill. For a moment I knew what it felt like to fox hunt. I can see the fun in cantering or galloping up and down over rolling hills. I could totally do it. Well, except for the minor detail of jumping fences. That, we don't do. 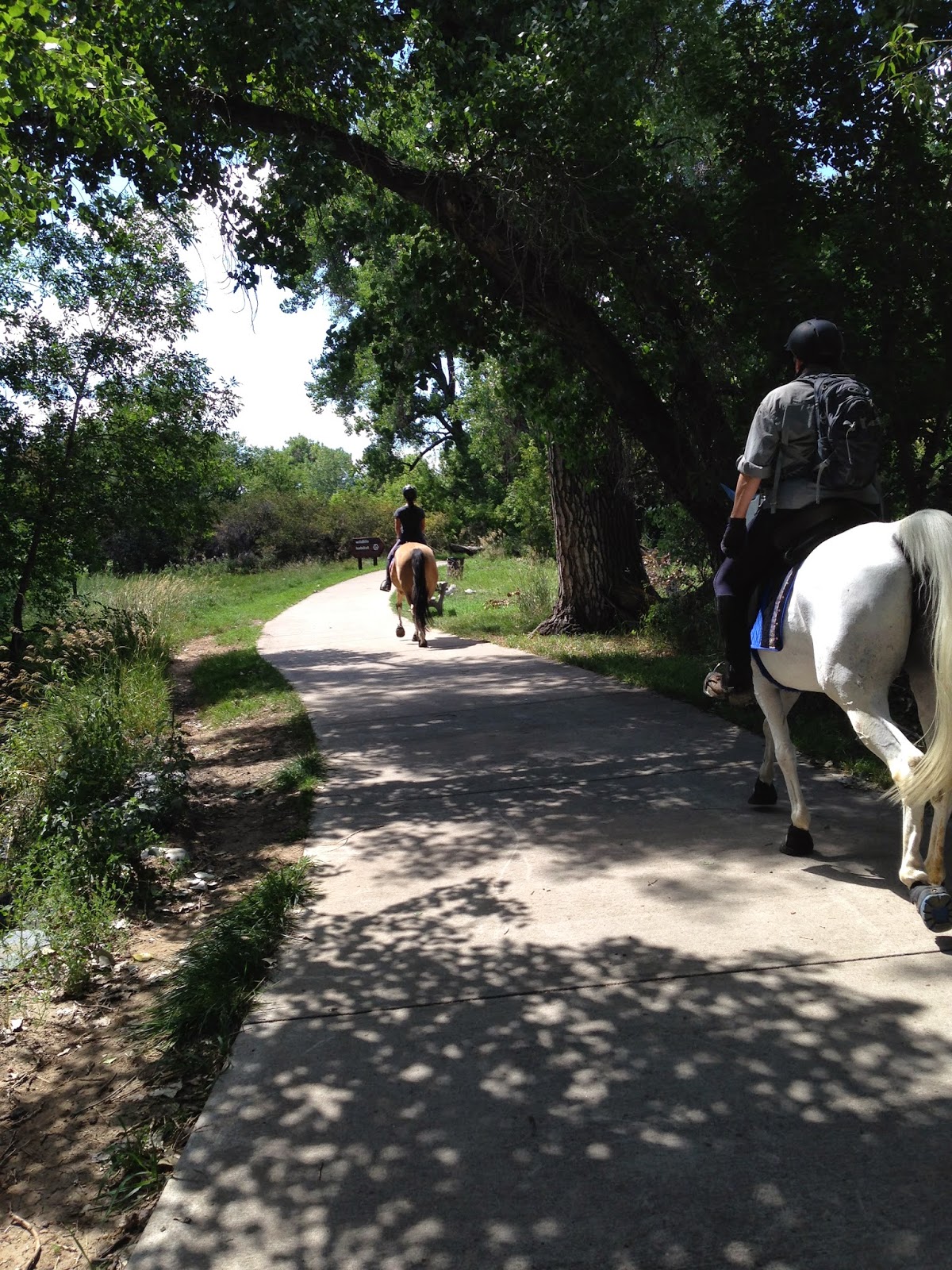 The rest of the ride was uneventful, although both Cali and Ashke were flipping their noses at each other and pinning their ears. Not sure what that was about. 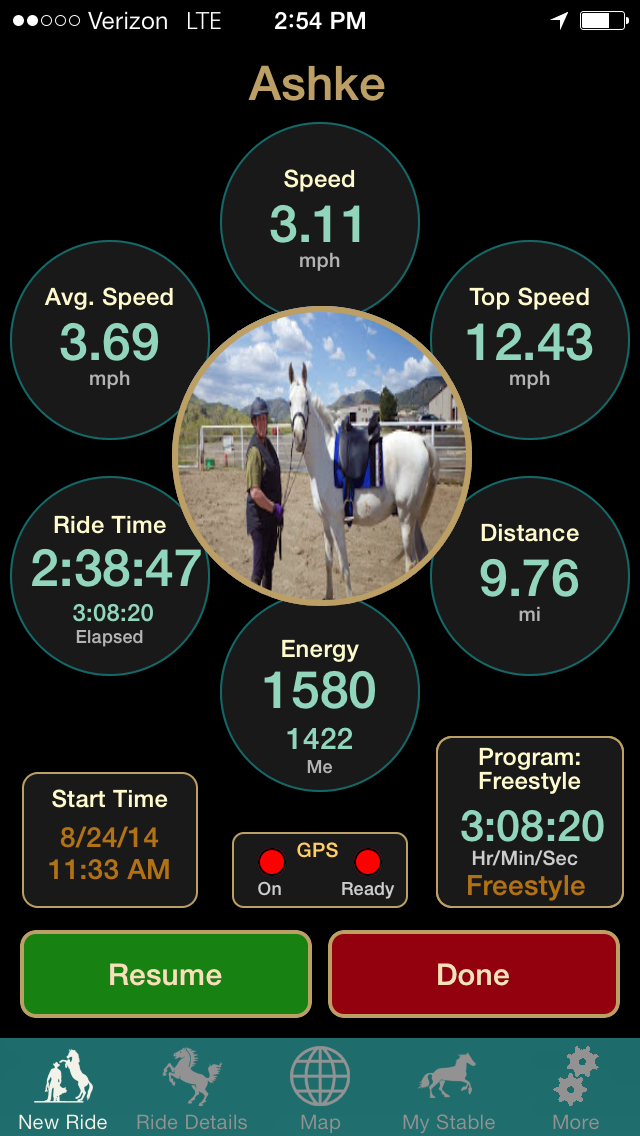 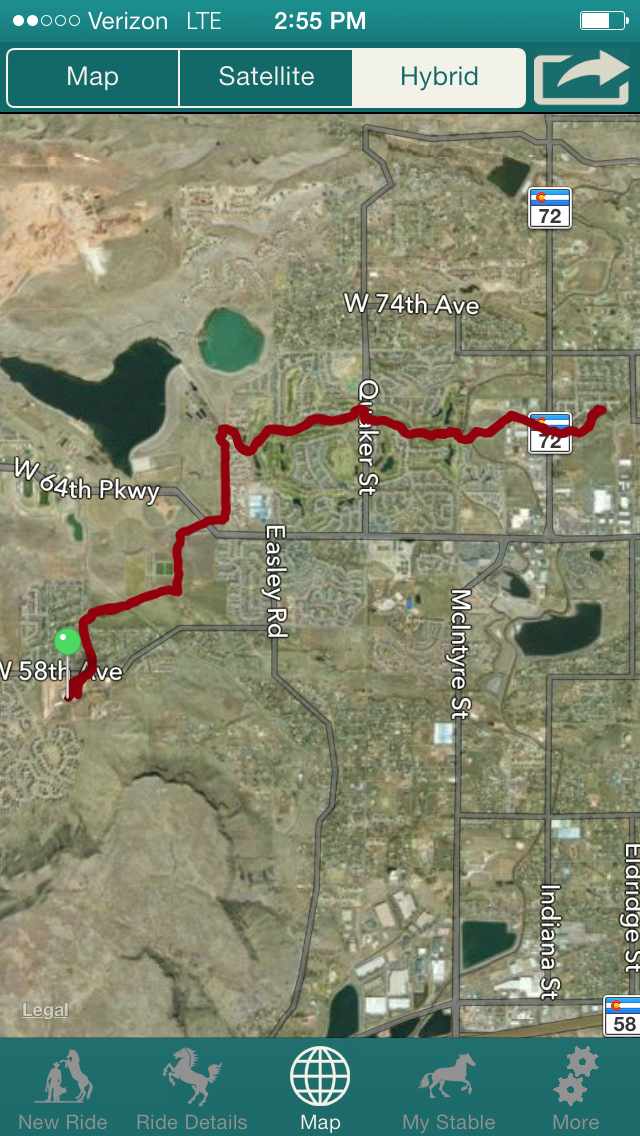 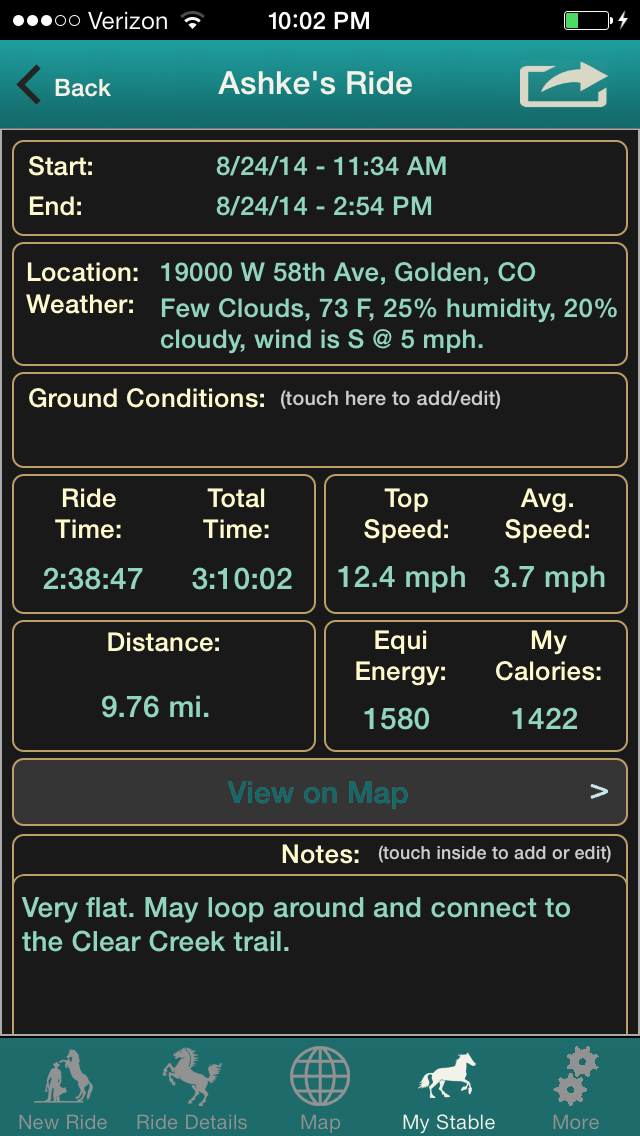 It will be fun to do this trail again.