This is a Happy Things Blog Hop hosted by Lauren at She Moved To Texas.  Basically, it's "what kind of stuff do we have in our homes.

You may or may not have figured it out, but I am pretty Indian-centric. Indian as in Lakota. My house reflects this. 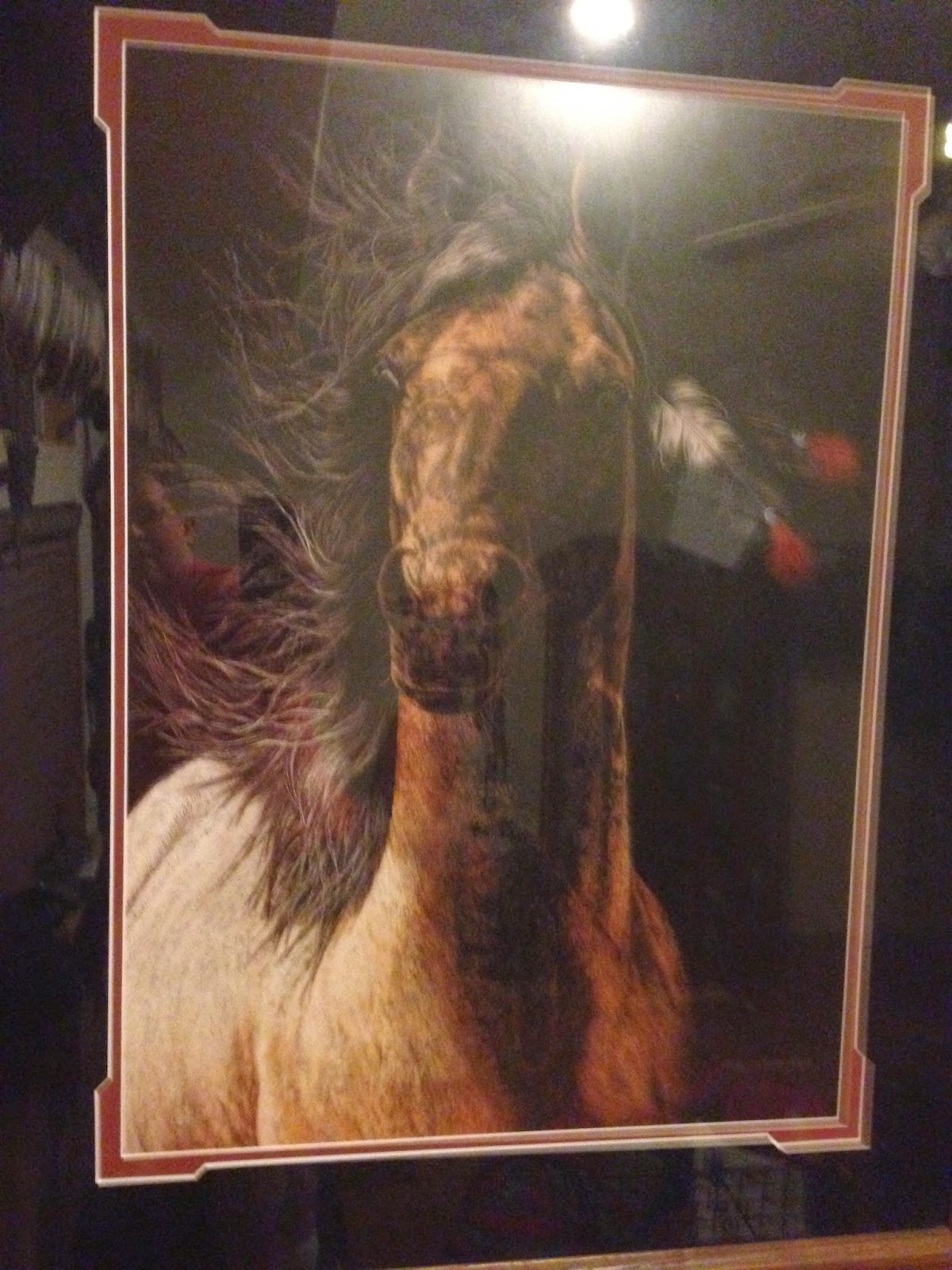 I am a Judy Larsson fan. She does incredible art. This one is titled "He Dog".
If you look carefully, you can see the face of He Dog in the center of the horse's face. He Dog was Crazy Horse's best friend as boys, until the politics of Red Cloud and the Agencies separated them. At the end, He Dog was the one to convince Crazy Horse to come to the Reservation.
I love this painting. 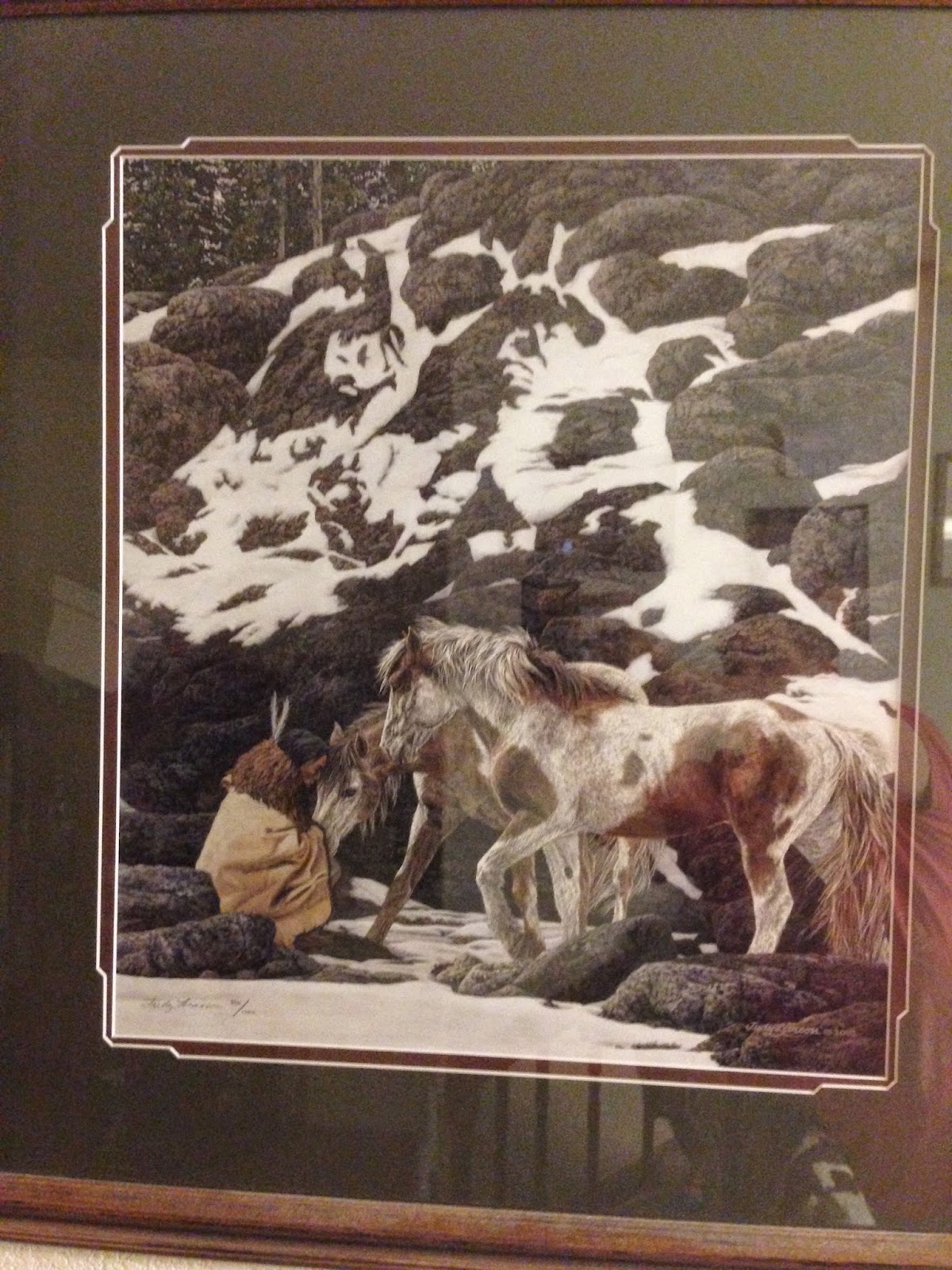 Our second Judy Larsson. Do you see the horses in the snow?
The image is of a medicine man and two horses.
The Lakota (and most of the Plains Indians) believed that the horse was sent to be Brother to the Indian. Horses changed everything. 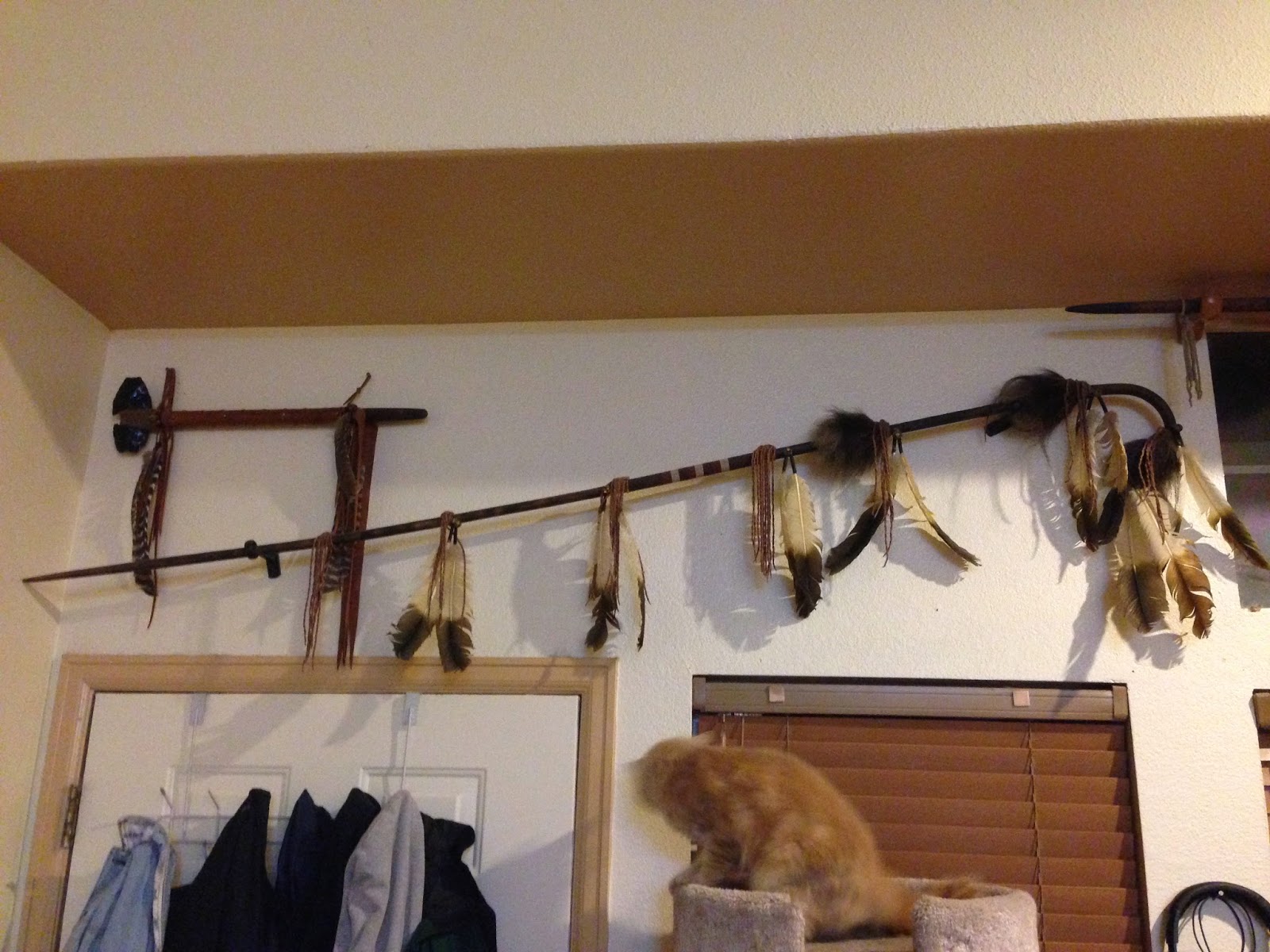 Coup Stick by Straight Arrow (Tsistsistas)
The coup stick was an warrior's weapon and was used to count coup. Coup was when a warrior would touch an enemy, taking away their power and shaming them in front of their friends. It was considered more significant than killing an enemy and most years the wars between Plains tribes resulted in many horses stolen, many coups counted, but few deaths.
This coup stick was made for me. It is designed to be used while riding a horse and is much longer than coup sticks used by warriors battling on foot.
There is a war club with an obsidian head in the upper left corner. It was also made by Straight Arrow.
And yes, that is Squeaker on the top of the cat perch. 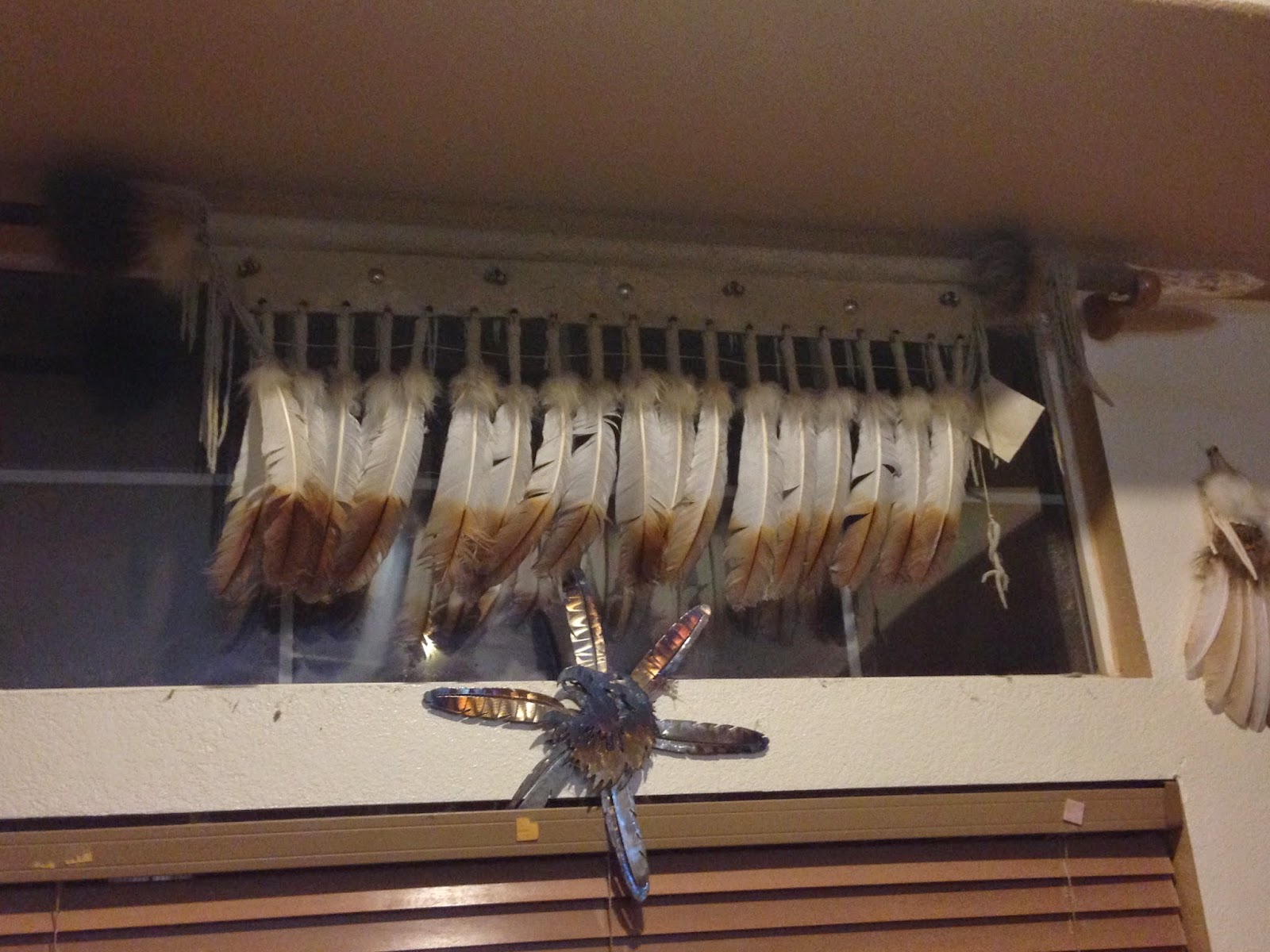 Dance Stick.
This hangs over the upper window and despite UVA film to protect it, has become very sunbleached.
It was also made by Straight Arrow.
Prayer fan to the right. 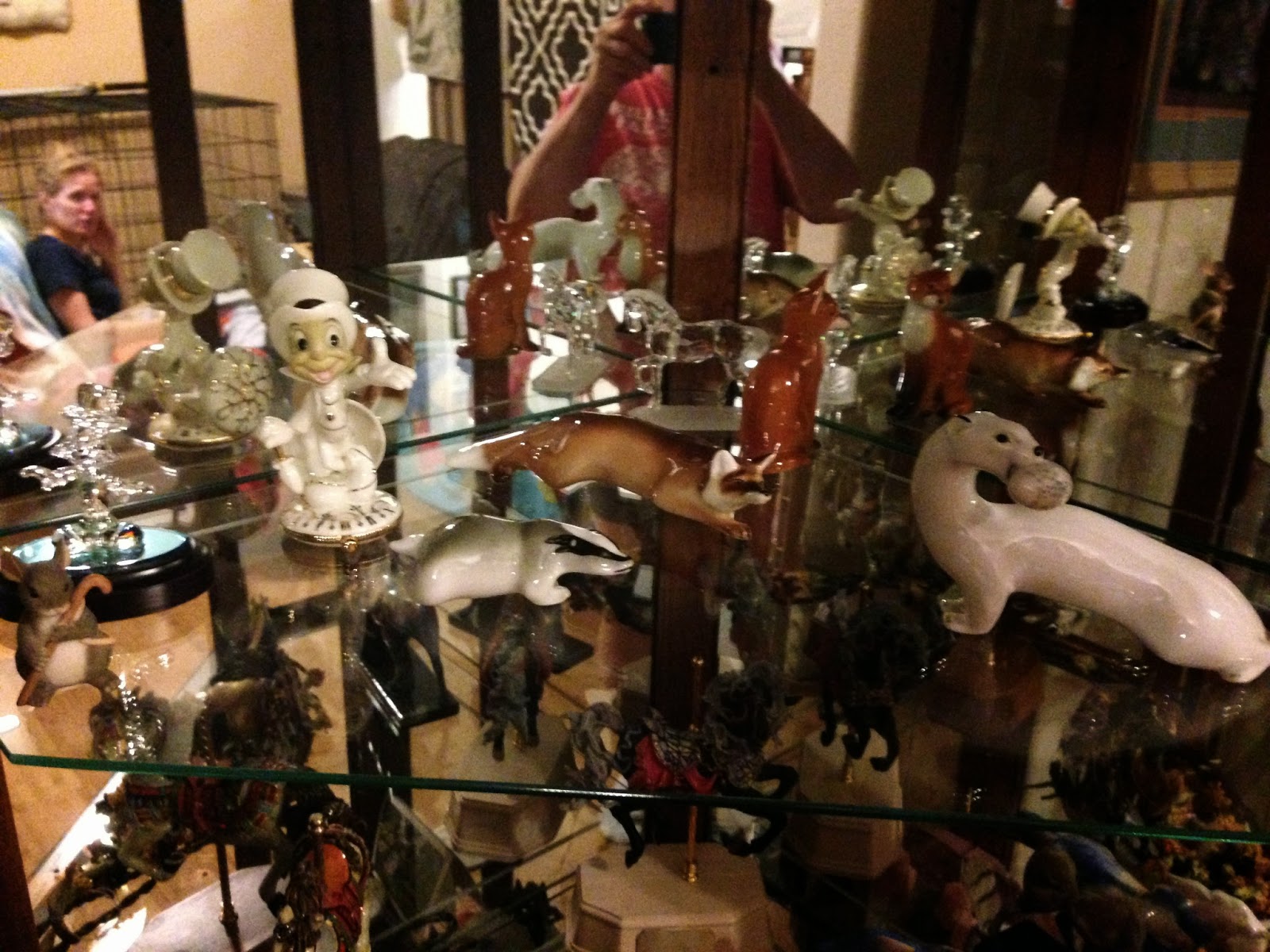 There are also two curio cabinets in the living room. One is filled with an eclectic collection of a bunch of stuff. The other is filled with Elephants.

Shelf one:  The eclectic one is mine: Russian Porceline in the form of two foxes, a white marten, and a badger. The badger is mine (Daniel Two Bear named me Ihokawin, meaning Badger Woman because of my temper. Menopause was a volatile time for me.) Two Jiminy Cricket statues (one is from Disney: the other is Lennox) because my nickname is Cricket. And a Swarovski crystal horse in the far back corner. 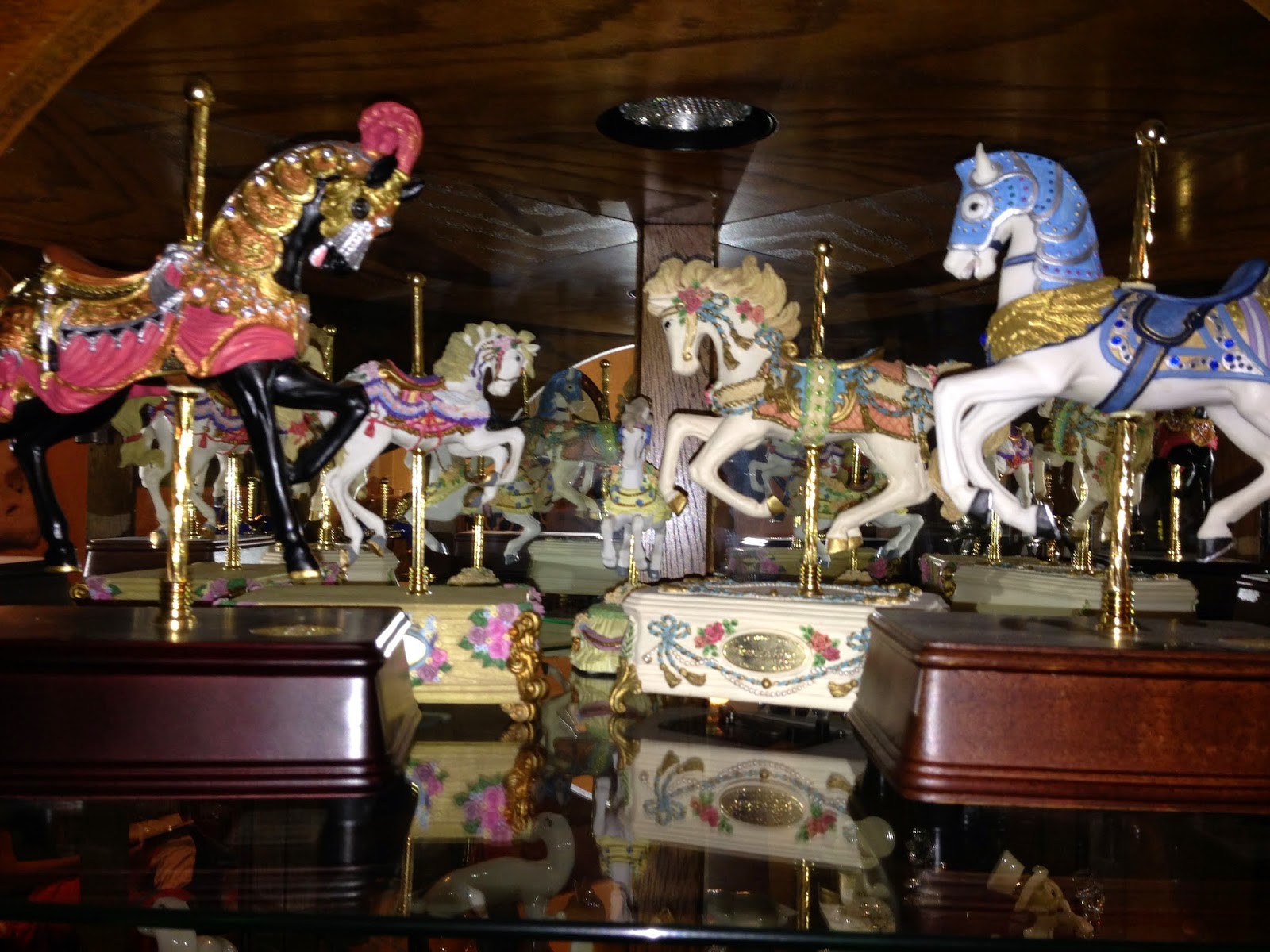 I have a modest collection of Carousel Horse Music Boxes. I picked them because of the horses and if those details weren't correct, they didn't come home with me. 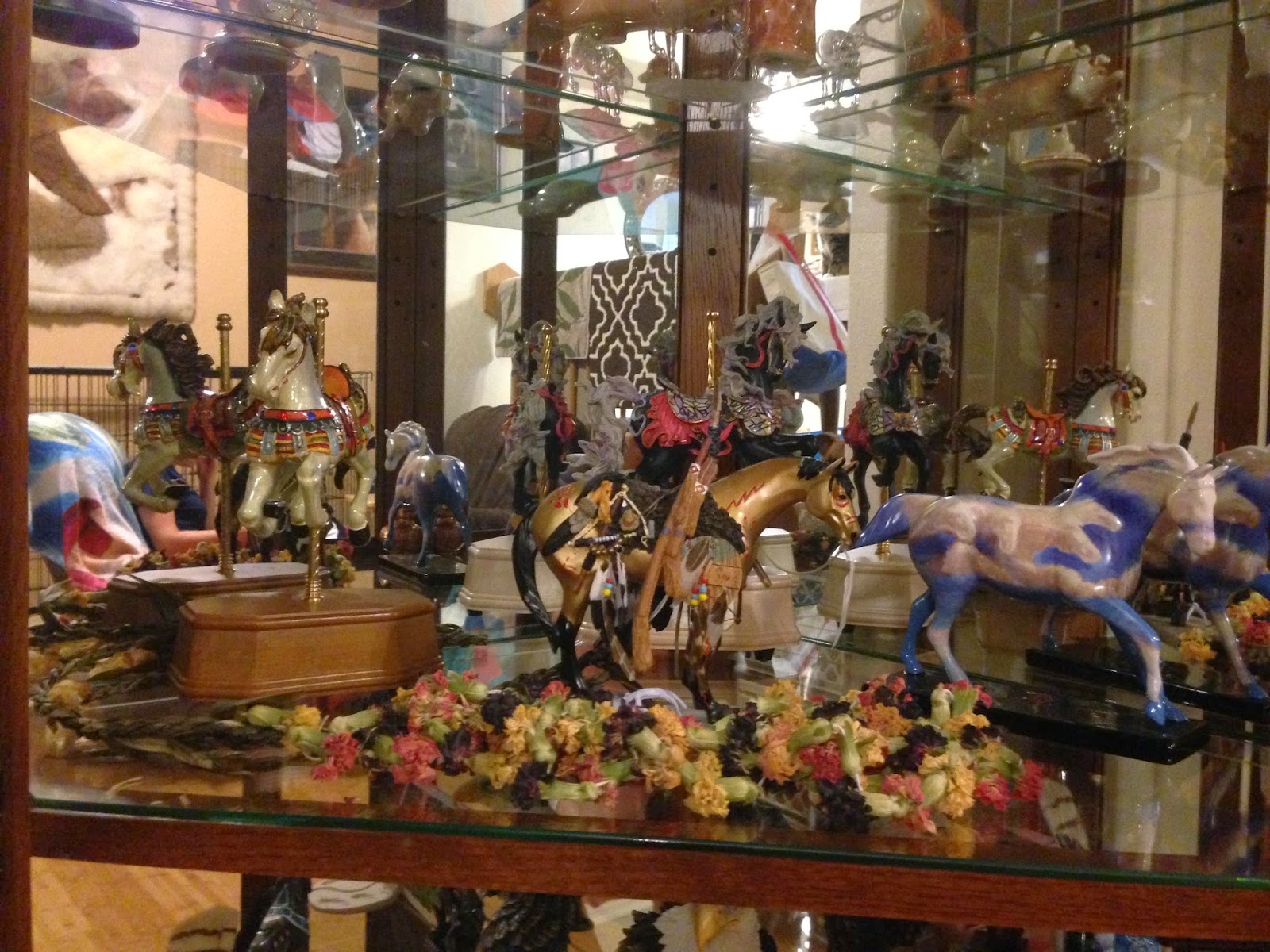 This shelf has my two favorite Carousel Horses. The green one is resin and truly traditional, while the black one has the elegant neck and head associated with the Arabian horse. I also own two Painted Ponies. The flowers in the front are the Leis J, T and I wore at our ceremony last August. 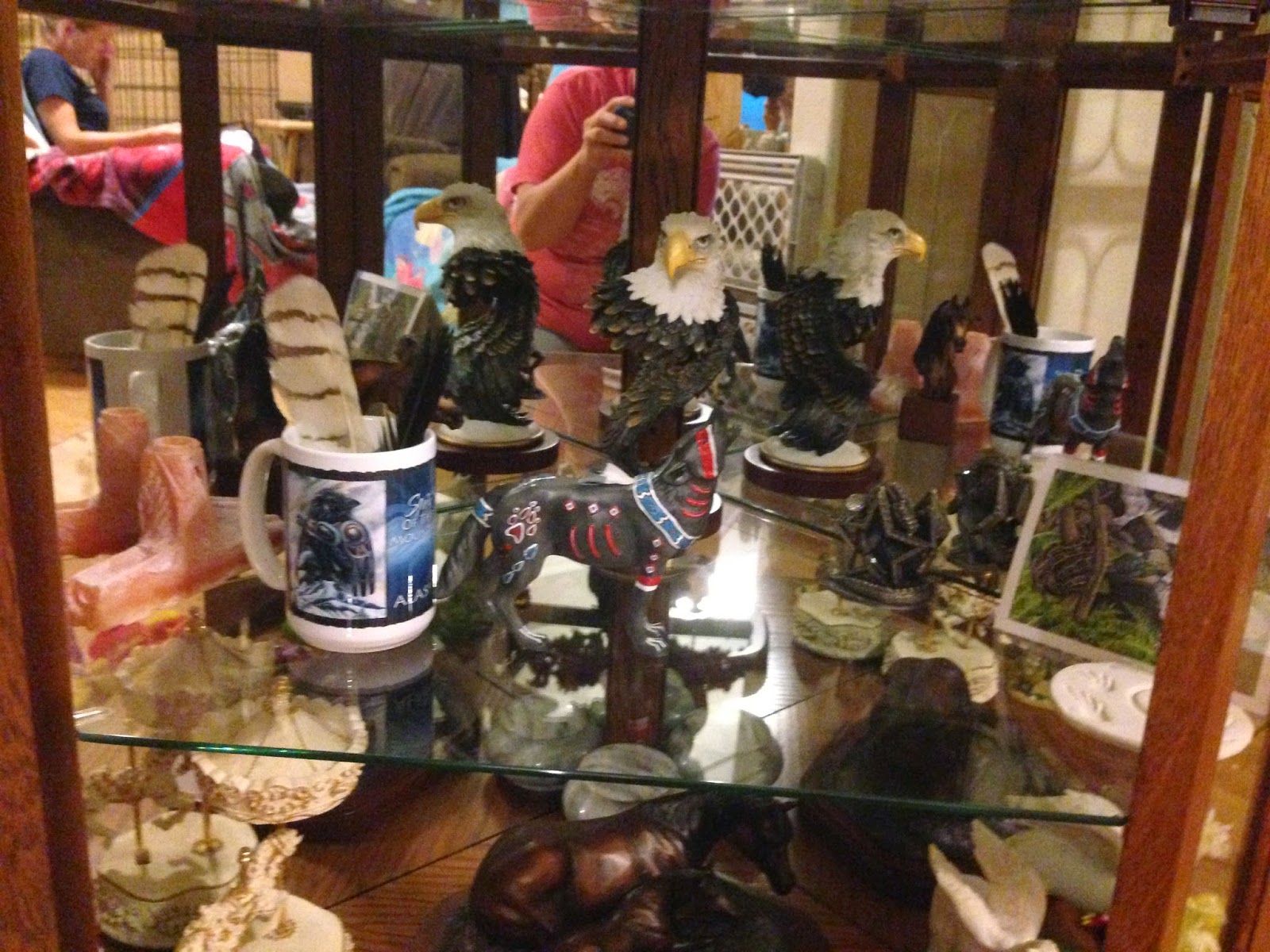 This shelf is somewhat mixed. The eagle and the wolf are T's. The Dragon star is mine from 30 years ago. There is a card and a plaster pressing from the Vet at CSU when T lost his first Bearded Dragon, Ash. A cup my sister gave me with an owl feather I found in Vedauwoo inside. And a pipe J started carving six years ago made of Orange soapstone from Utah. And a wood carving of an Arabian horse's head.