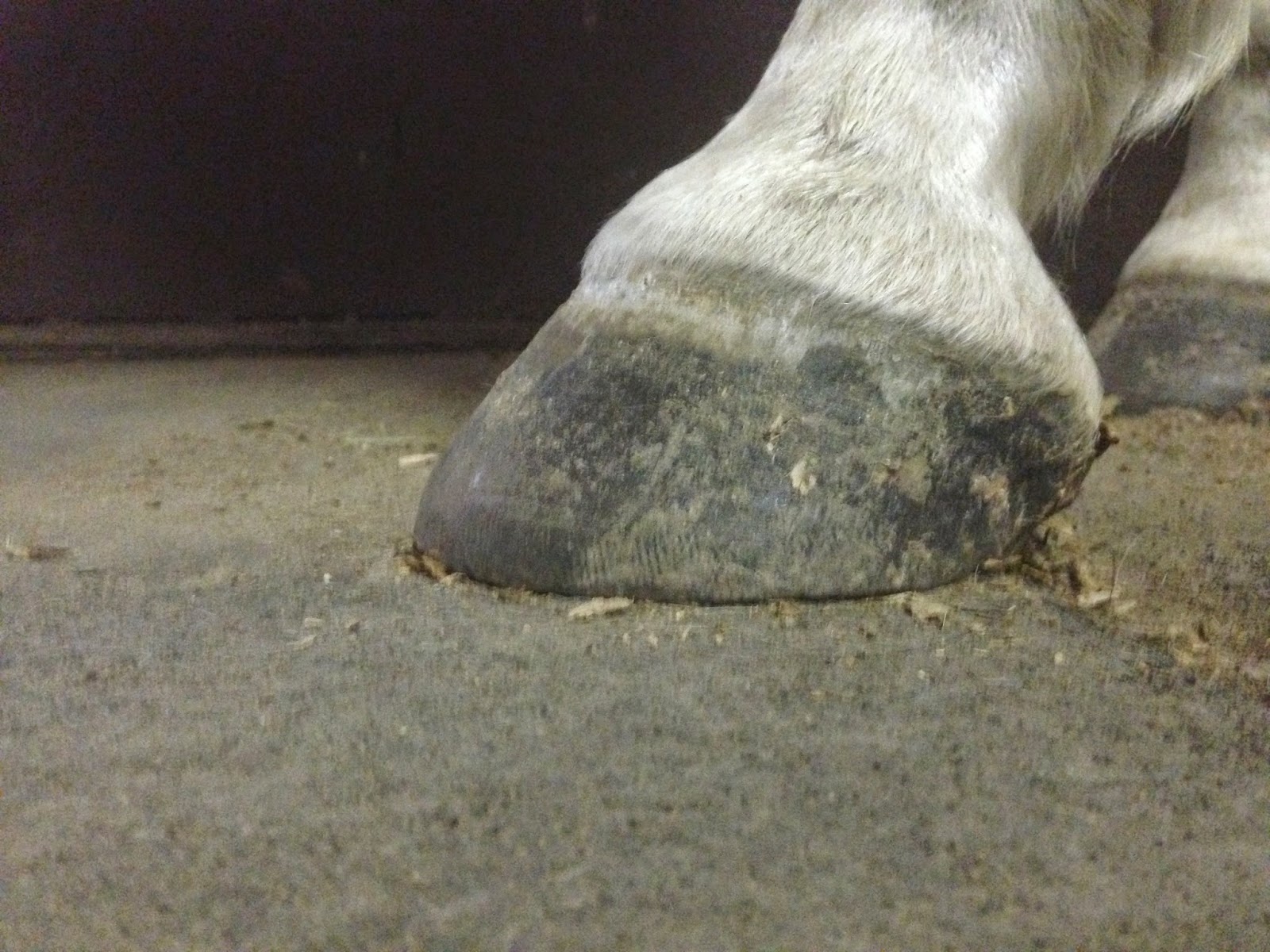 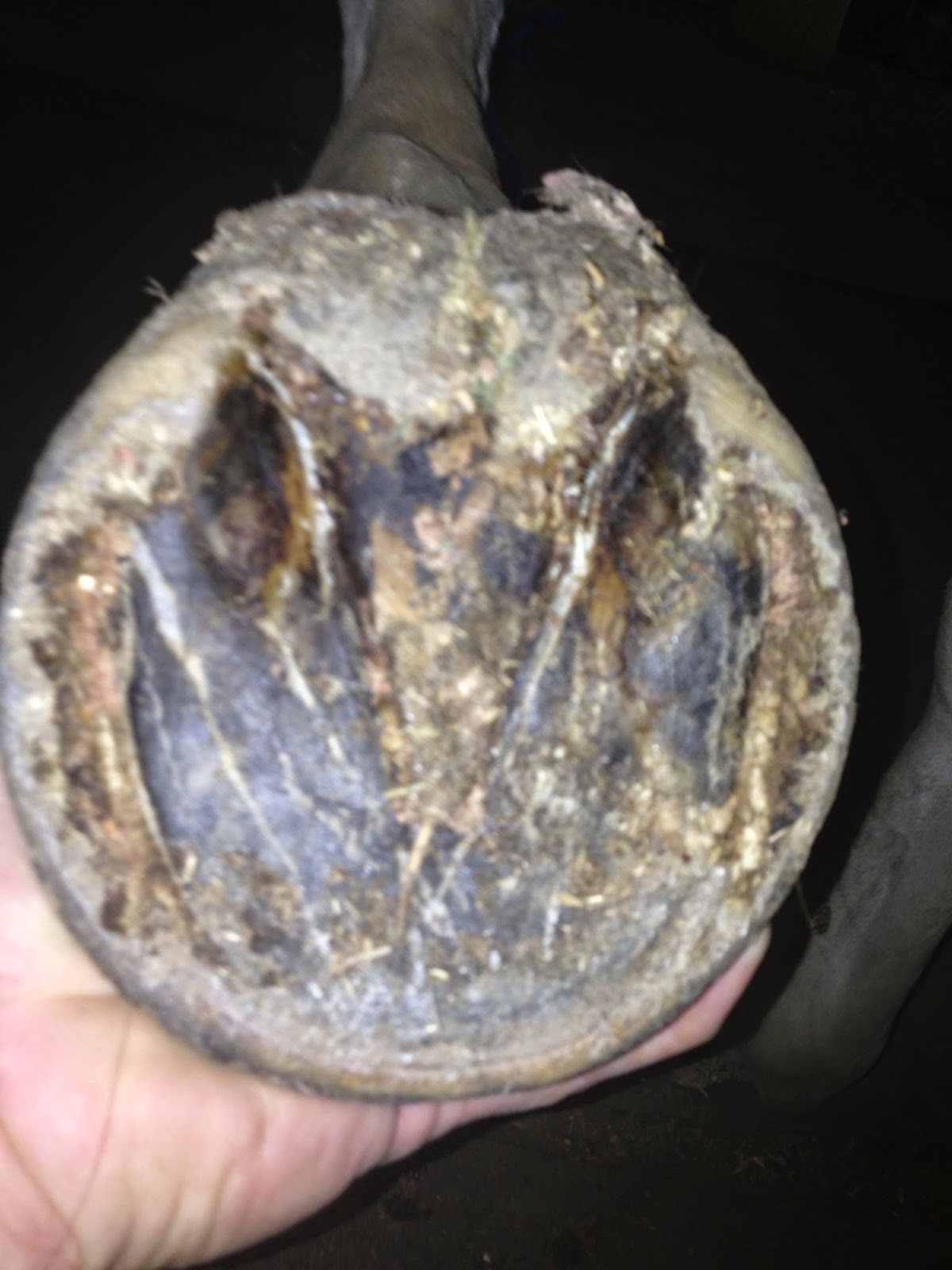 LF Hoof, bottom view. After one application of Magic Cushion. 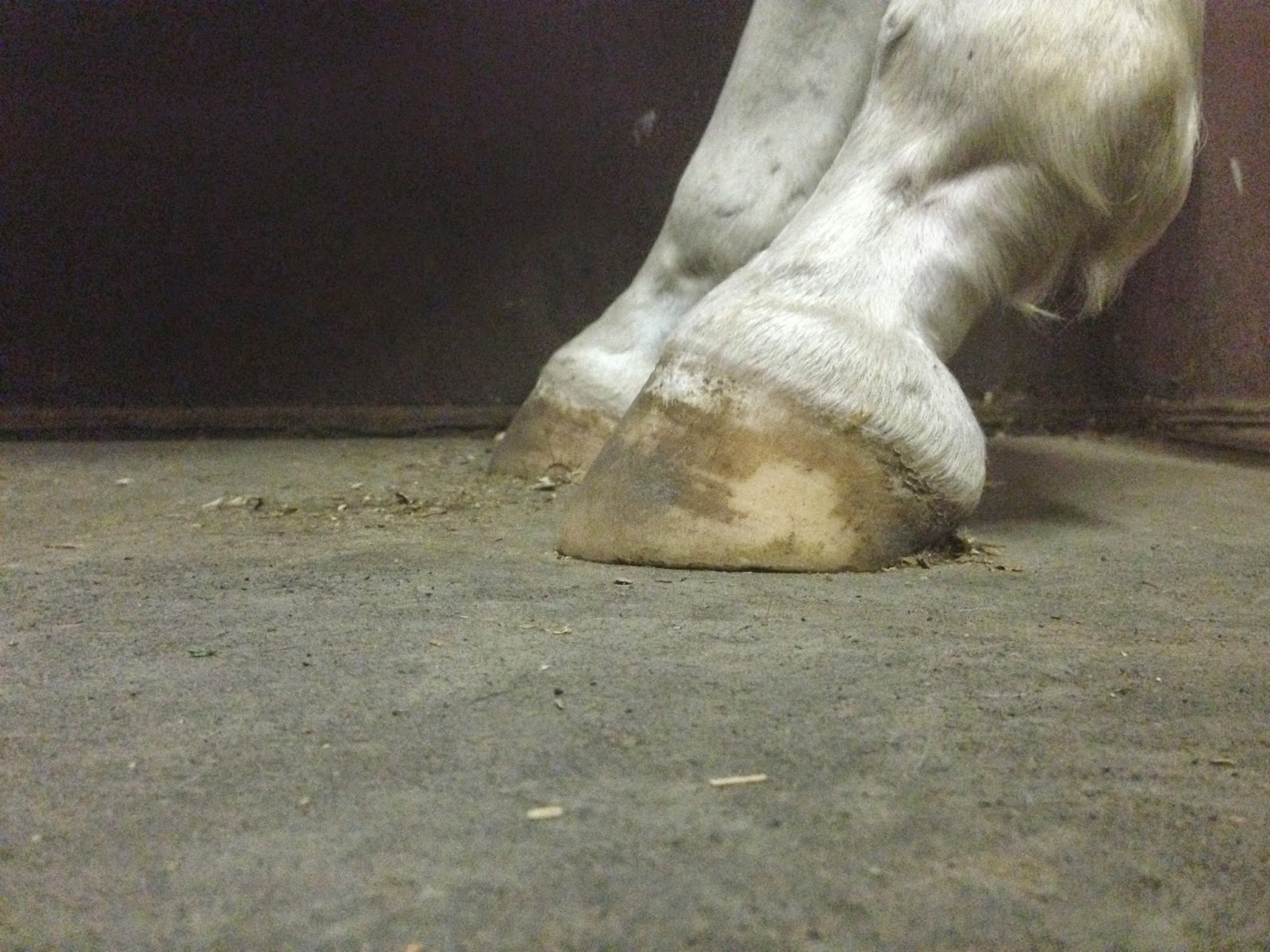 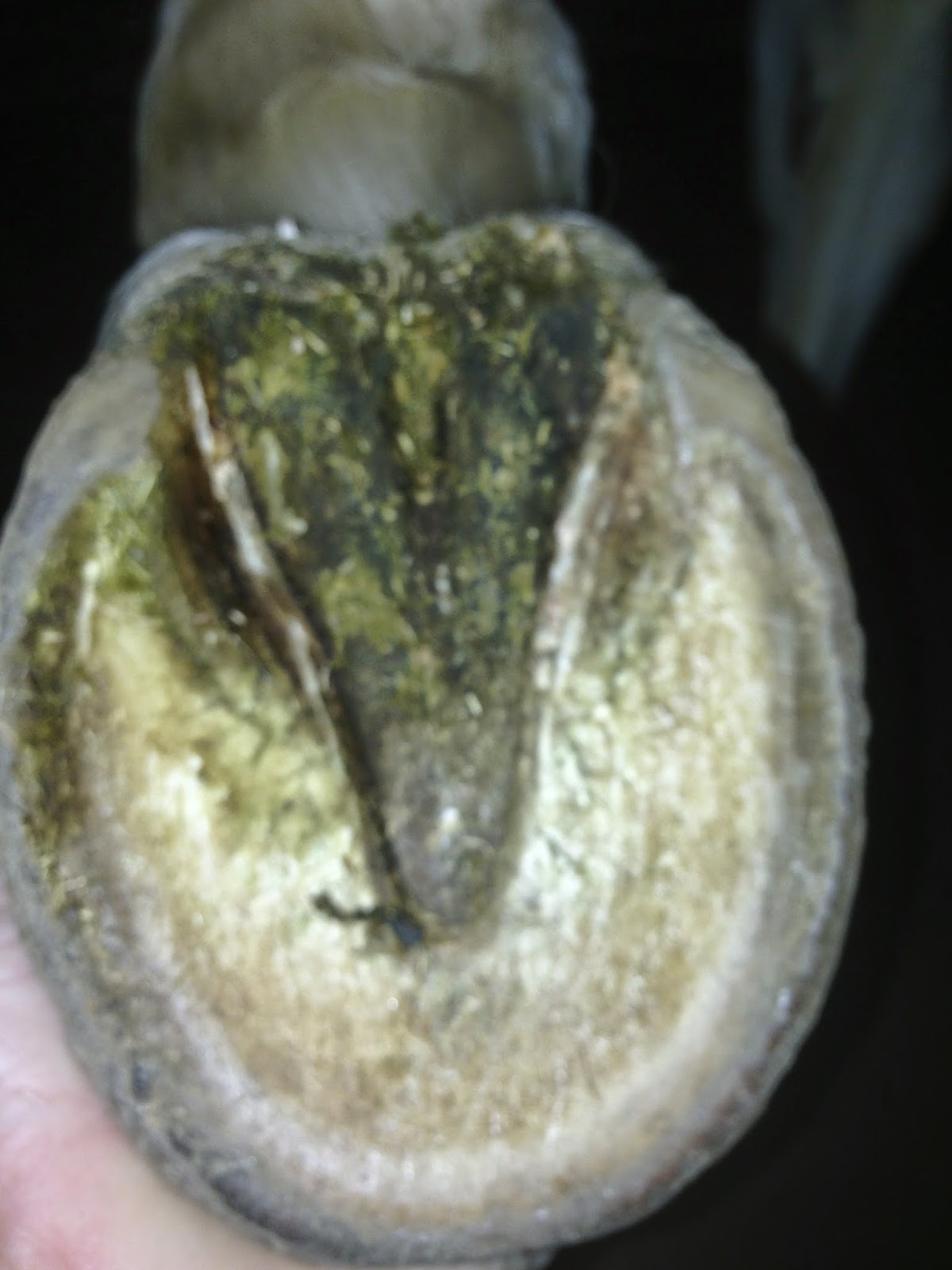 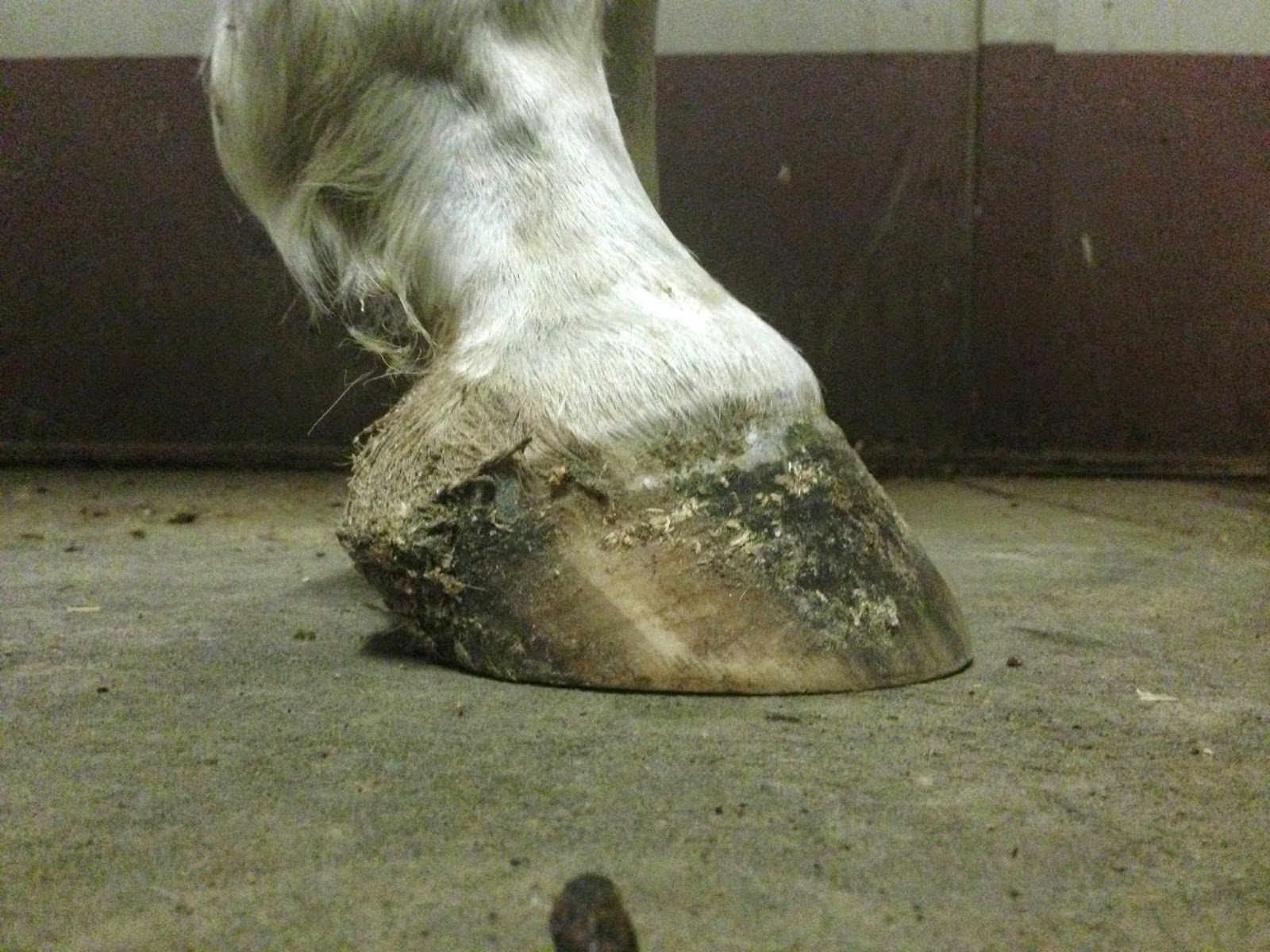 RF Hoof, side view (this is the one that is quicked)﻿ 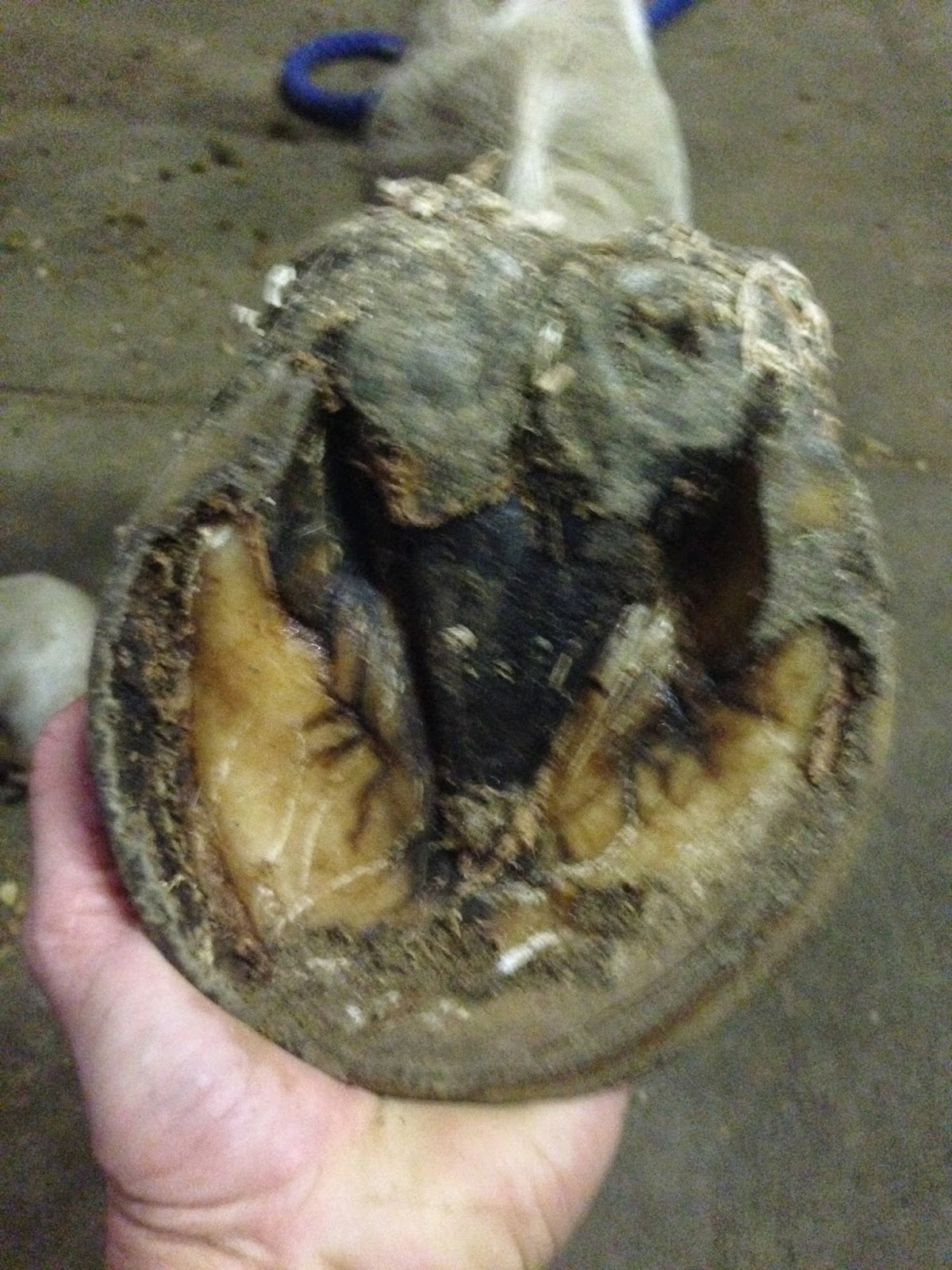 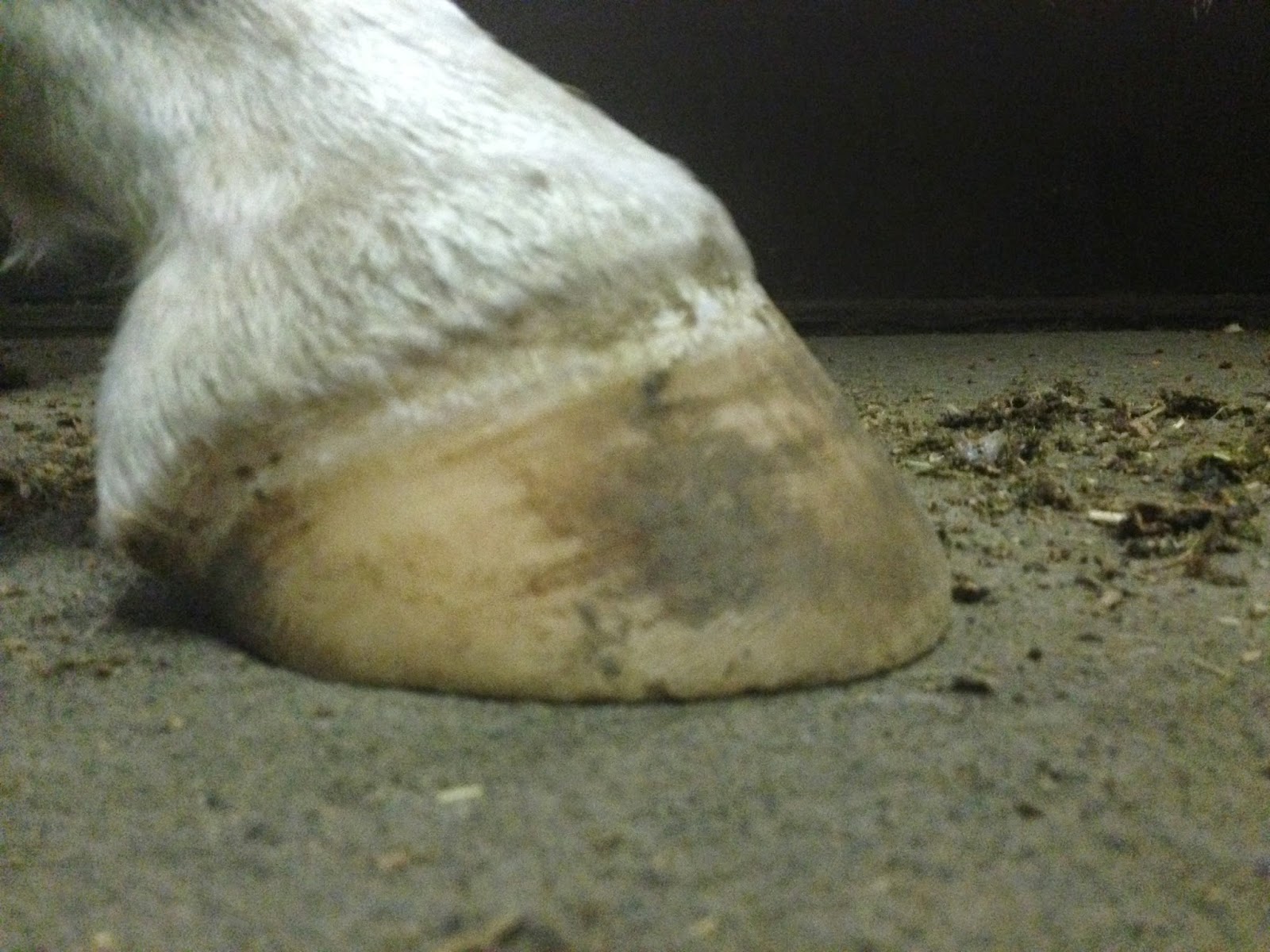 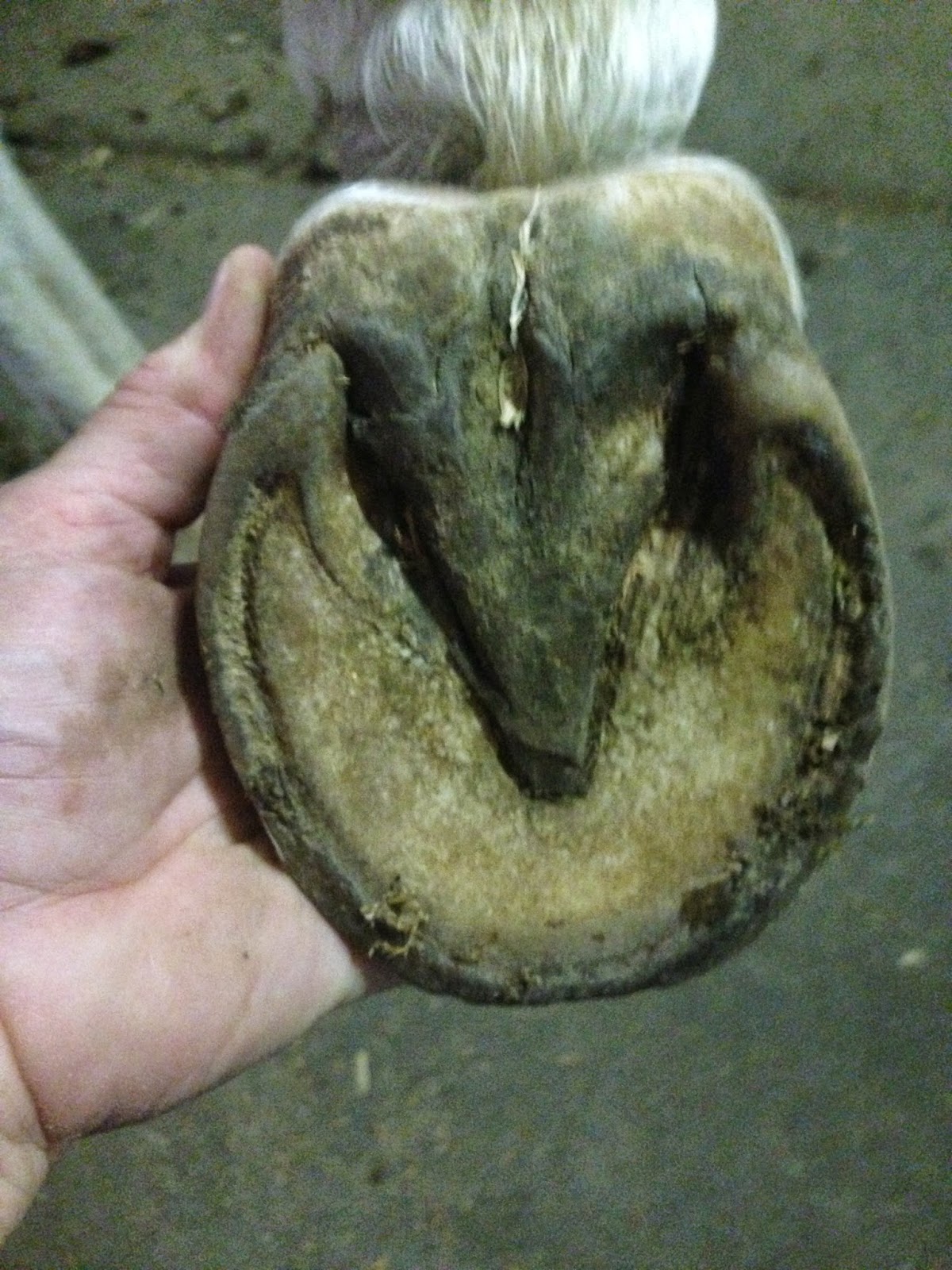 On Monday, as I was leading Ashke out to the outdoor arena to do some light riding, he stepped on an especially sharp rock on his RF, stumbled and almost fell. During that incident, he managed to gouge a bunch of skin off of the back of his RF pastern. I turned him around and headed back into the barn. He was too sore to work.

Instead, we wandered around the edges of the outdoor arena watching J take her fourth lesson and EATING ALL THE GREEN THINGS. Ashke hated that. (On the lesson front, I think we are moving closer and closer to the assumption that at some point we will be a two horse family.)

I repacked his feet with Magic Cushion Monday night and left them packed til Thursday. On Tuesday night while I was talking to another boarder (I was feeding) I discovered that the farrier Saiph found online for me (who lives in Frankstown about 2 hours away) comes to TMR to do feet. He is a DAEP and very committed to barefoot, but will do whatever the horse needs to make them comfortable. I called him on Weds and got Ashke and Cali added to his schedule. He trims every six weeks during the hoof growing season, which I think is awesome! We will see what he has to say on August 25th.

On Thursday, I headed to the barn with 12mm pads for the front boots and new 0 size boots for the back. (For the record, I have now purchased six boots and four gaiters for the last four months of riding. If the boots don't fit correctly, the gaiters tear. The only positive is that the size 1 boots I bought a year ago fit Cali's hind feet - hers have been too big from the very beginning.) The .5 boots I bought in April will go in my tack box in case his feet grow. Meh.

I took Ashke out and turned him loose in the outdoor arena after asking him to jump over a small crosstie and had him take out (read: knock over) the jump. (We will never be jumpers - although I would like it if we could do a small crosstie with grace and precision for WE.) I left him there, tearing up and down the fenceline, tail flagged and head up in the air, while I went back for Cali. I turned them both loose and they tore around the outdoor while the sun sank further and further behind the mountains. Fifteen minutes later they were both blowing and steaming in the warm air. I walked them back and put Cali away.

The boots stayed on even in the deep, wet sand of the arena and for the most part Ashke was comfortable. I only saw the occasional misstep. However, Magic Cushion is not recommended for inside the Easyboot gloves, just as a public service announcement, because it takes on the consistency of epoxy and is impossible to get out of the boot.

I think, based on what I saw last night, with the addition of the 12 mm pads (super thick), I will be able to do a ride on both Sat and Sun with at least J. We want to do some exploring of the Open Space North of the Fairmount and see what we can see. And maybe we can also trailer to Barr Lake of Chatfield for a ride as well.