The weather has been so strange for Colorado this year. So much consistent rain and much cooler temperatures than normal. Today, in normal years, it would have been in the upper 90's. However, today the overwhelming feeling of the weather was one of fall.

Fall means crisper temps and a hint of snow on the wind. For those of you who ride in four season weather, you will know that this also means a bit of unrest in the horse. Ashke was spook city today. And thanks to Aurora at Redheaded Endurance explained it better than I can: the 4 Acceptable Arabian S's. Ashke sometimes employes the Startle, Stop, Stare, Snort of the 4 S's, but today it was almost entirely Startle. Startle. Startle. I would say something and he would snort.

It was very difficult to keep him forward. I was trying for as much speed as I could get over the distance and today of all days, he wanted to drag his feet. Or Startle. The Startle slays me because I can feel it through his body and then I startle, even if I don't know why I'm doing it. It was a lot of fun. 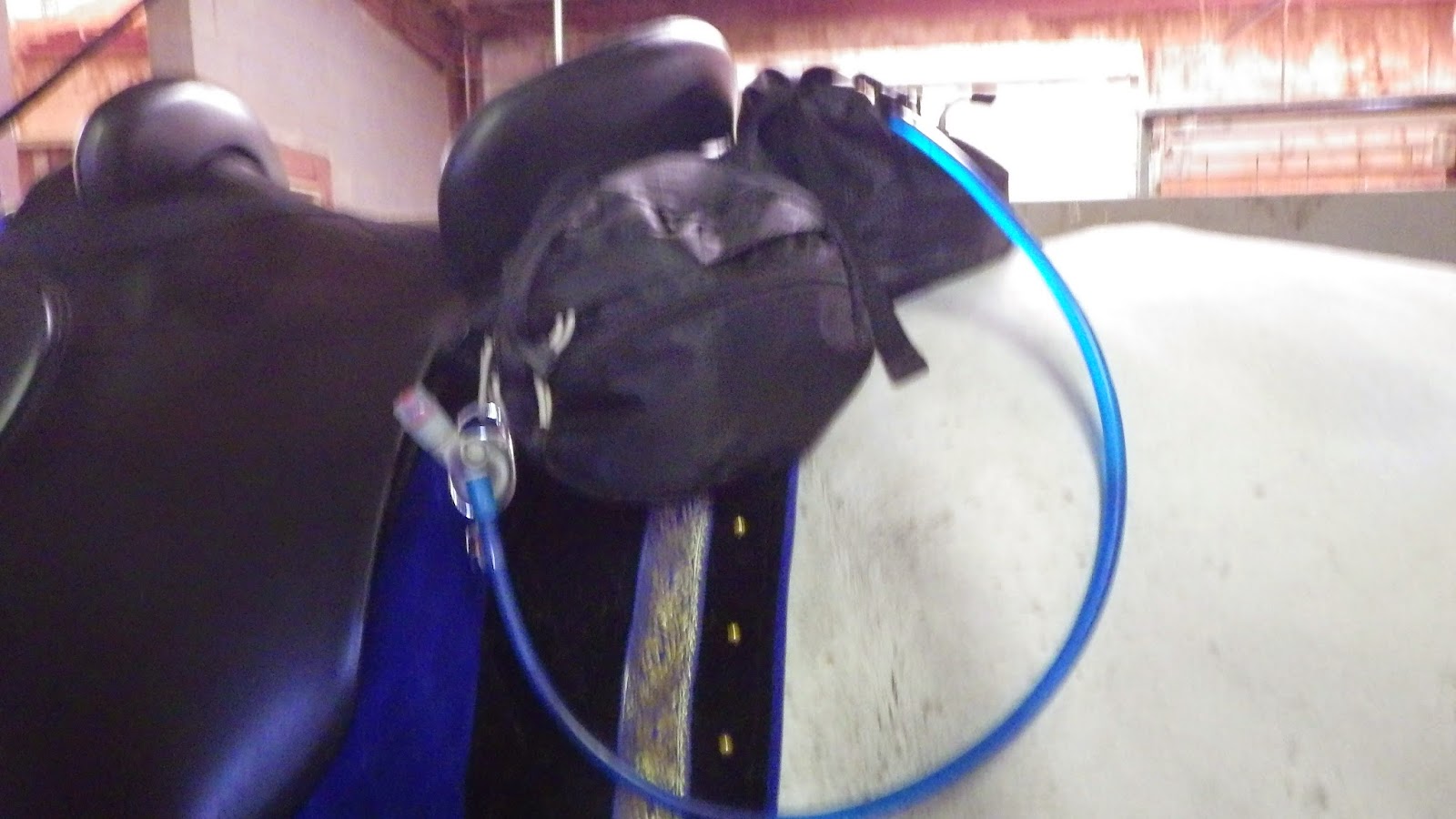 To start, I fixed up a Camelbak bladder inside the cantle bags on the back of the saddle. The saddlebags are Stowaway and the bladder is in the middle compartment. I had lunch in the other two. There were two things that were an issue. The first is the bladder tube slapping Ashke's flank. He wasn't happy about that. The second was the lunch bouncing on either side. He wasn't too happy about that either. 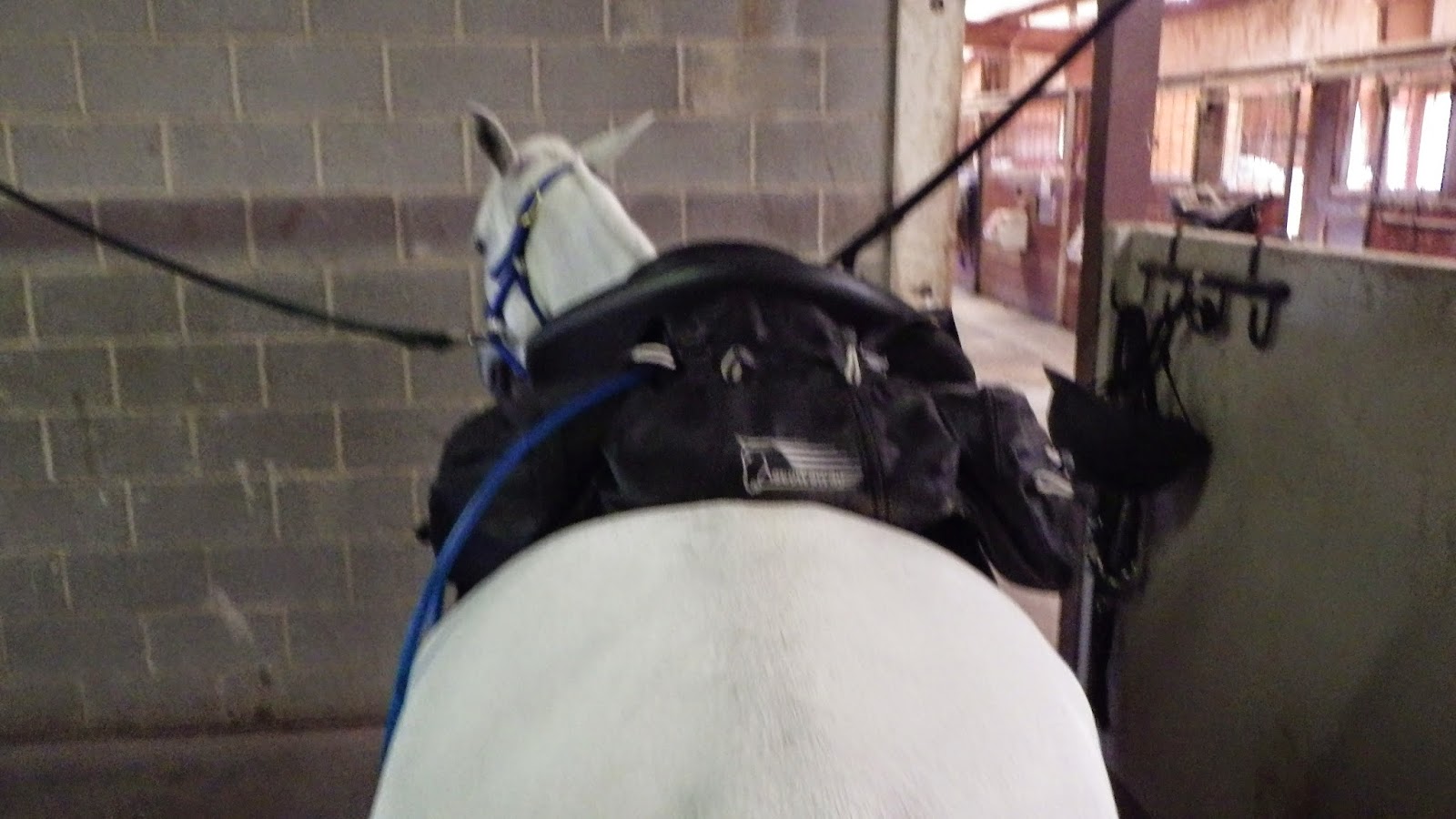 I had it centered well and strapped as tight as I could get it, but it still bounced some. He kicked out at it a couple of times, but then settled down. Of course, he didn't canter much more than a couple of steps at a time. I will ride with it again tomorrow so will see how it goes then. I really loved not having the weight on my shoulders. 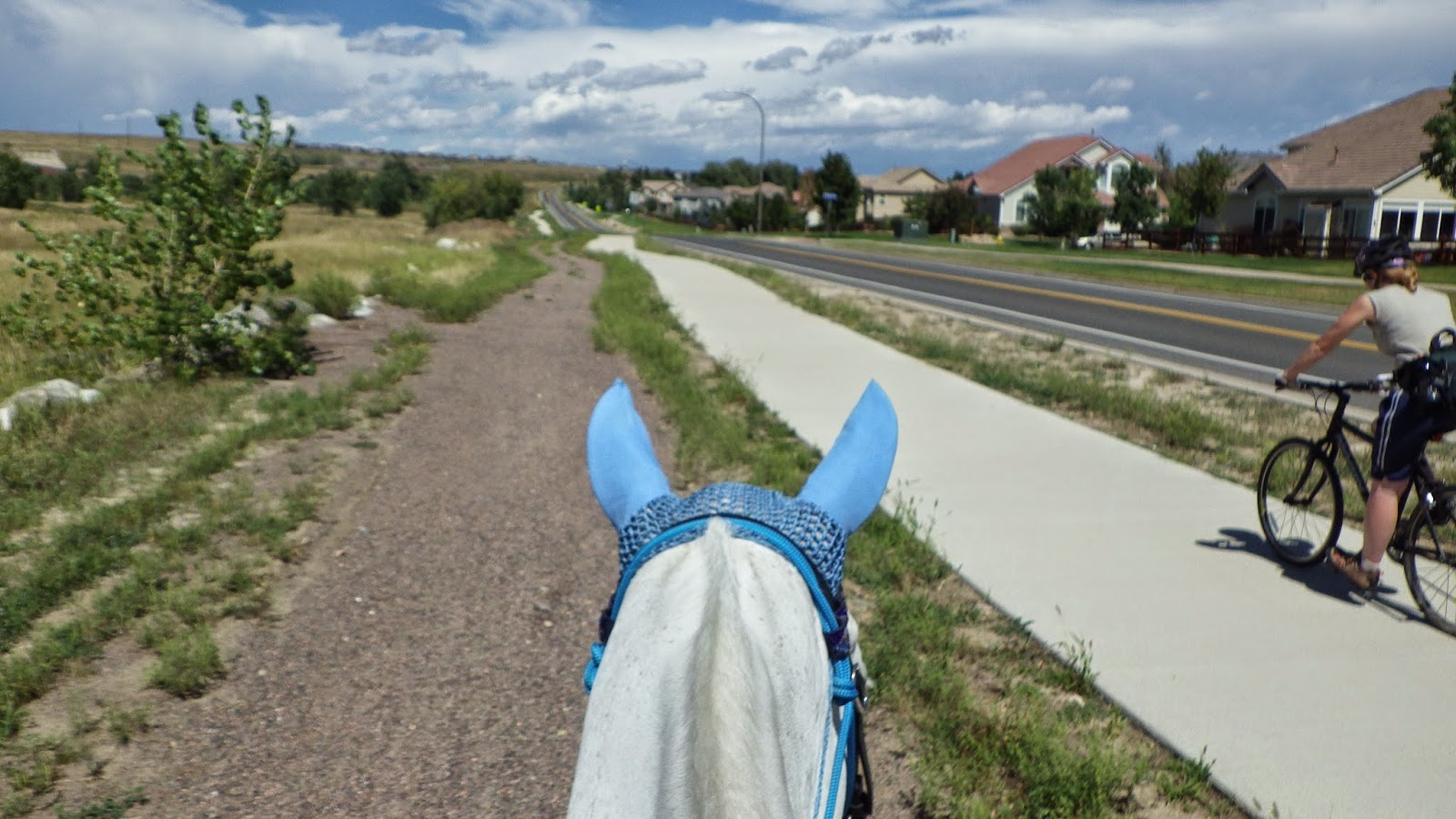 Can you see the clouds in the sky? It was mostly sunny for most of the ride. It gave Ashke a great look at all the terrifying rocks along the trail. 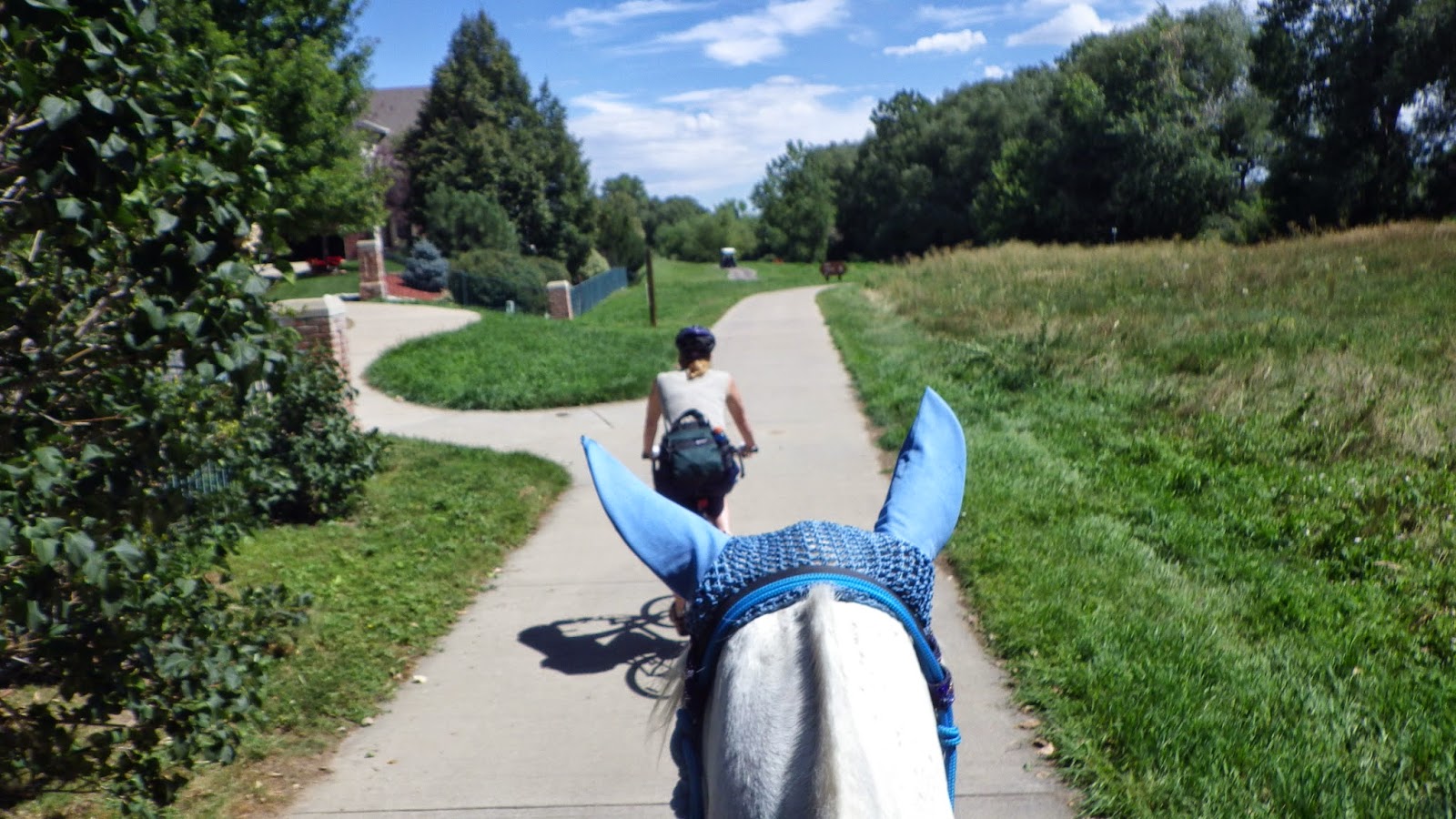 We went back up Ralston Creek Trail. I tried to canter where I could, but mostly we trotted on the way out. I don't know if it was the weather, us being out without Cali, or a bee in his ass. Honestly. Startle. Spook. Startle. 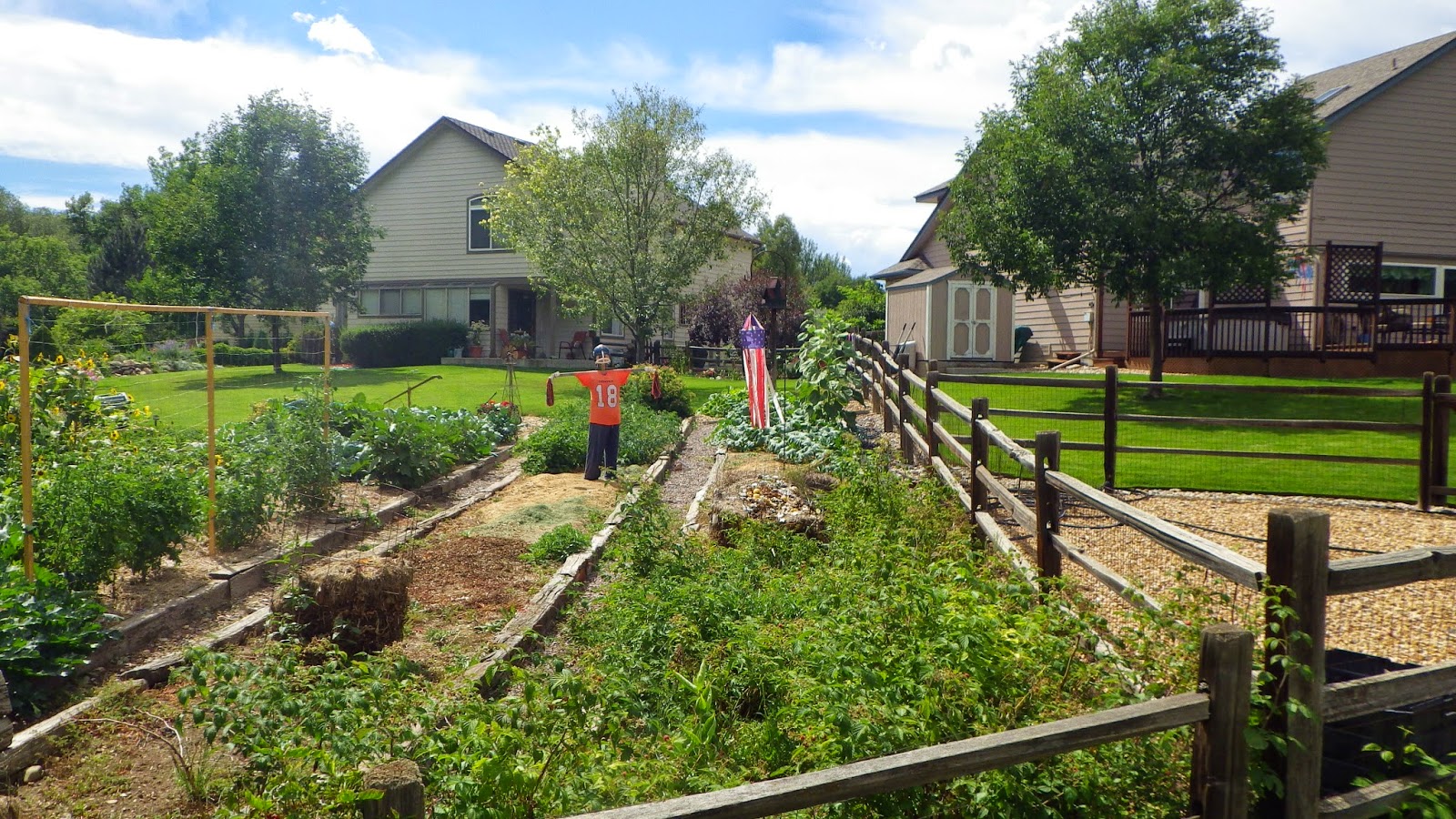 There was a garden along our trail with a Manning scarecrow in the middle of it. 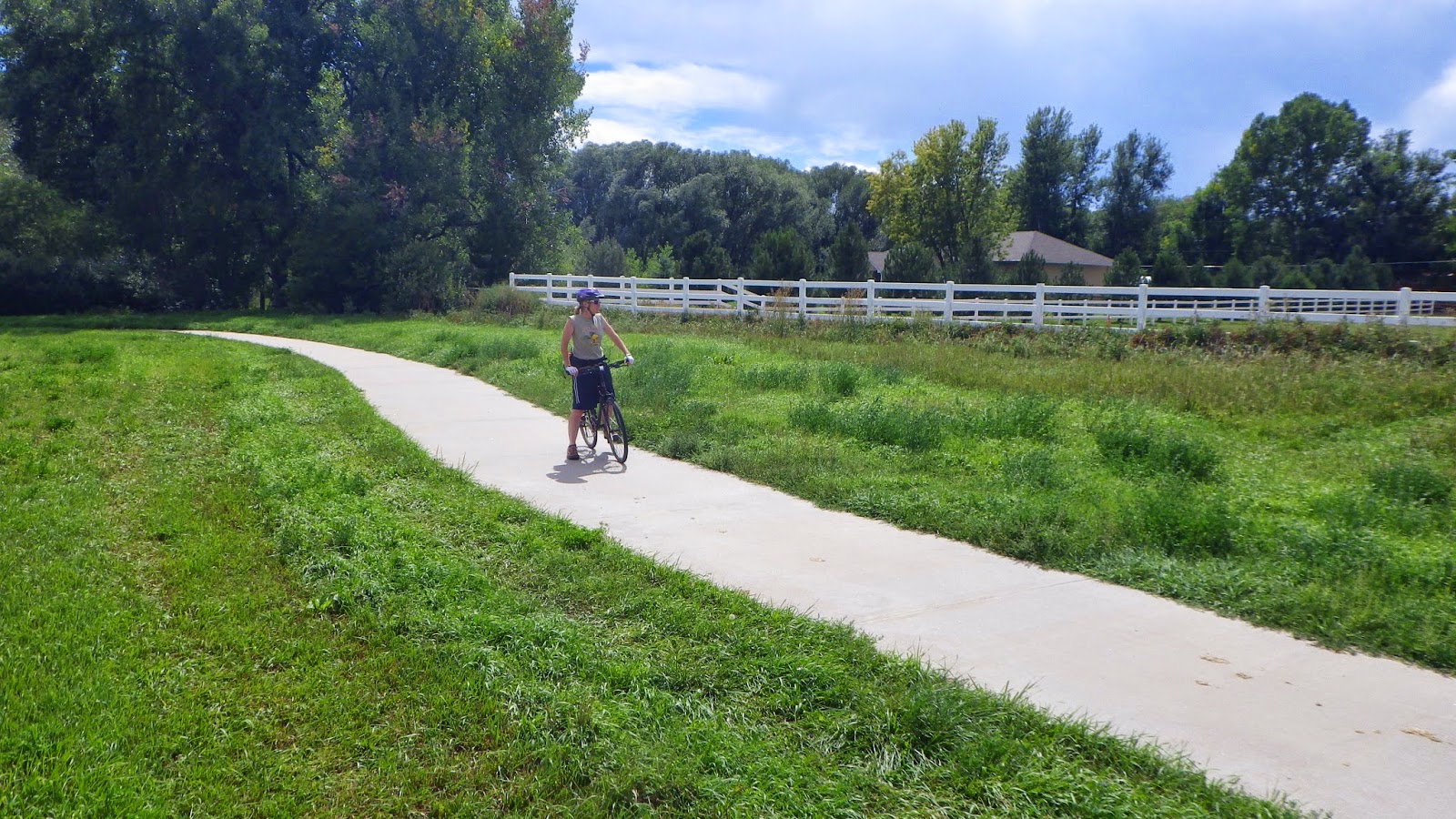 J likes this trail. It is mostly flat. There were some awesome places to canter which we found after we stopped for lunch. I discovered I had tied the leadrope leading to Ashke's halter (rope halter he wears under his bridle) onto the right side of the saddle, where I couldn't reach it. Usually I tie it on the left so I can reach down and hold the lead rope when we trot or canter to keep it from swinging or smacking Ashke on the bottom of the chin. When we stopped for lunch Ashke grazed for twenty minutes or so and then I tied the lead rope to the other side. Plus, I ate the lunch, so there was less to bounce on his back. He was much better after that. 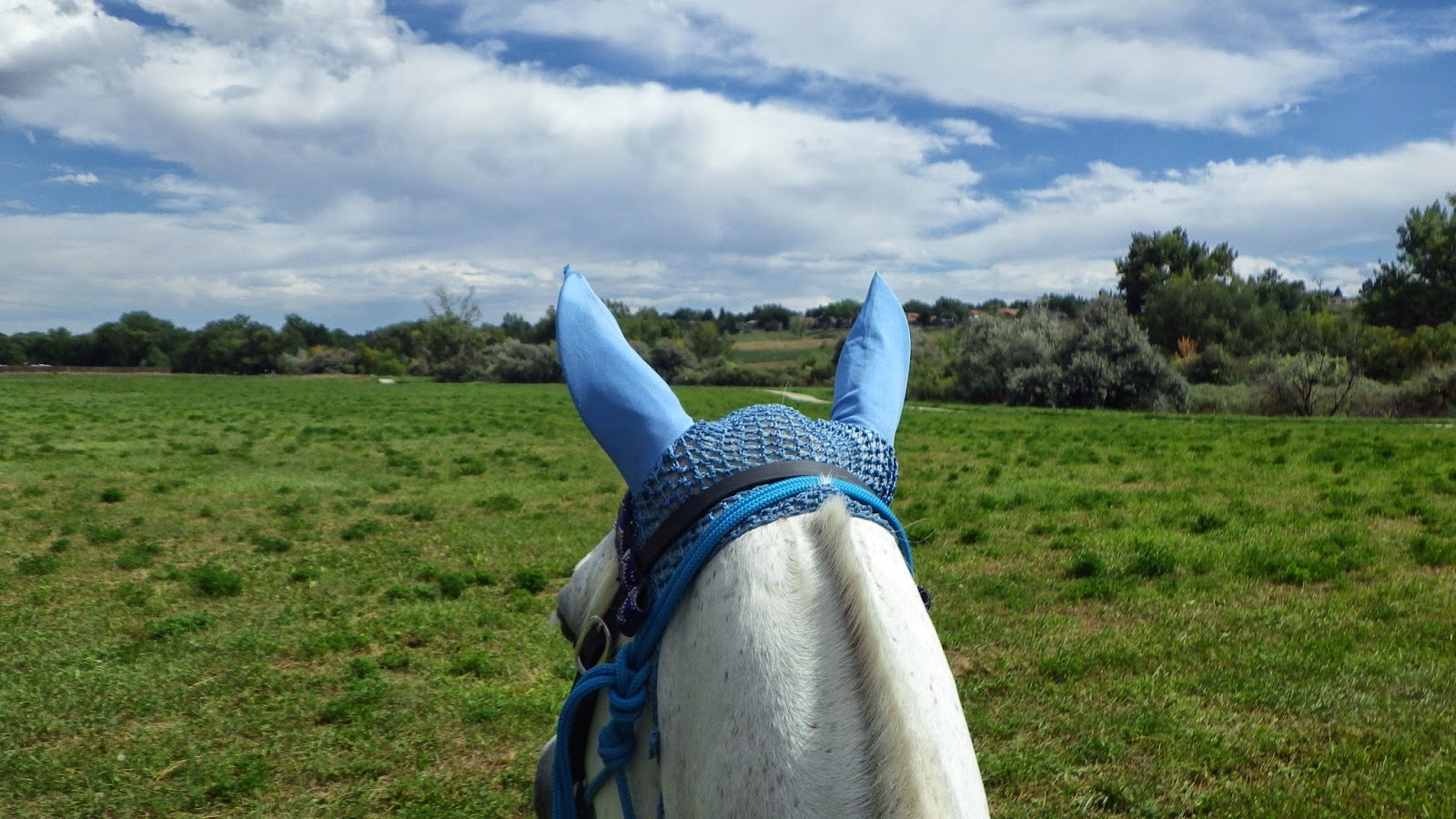 And we found some very nice fields to gallop across.

I find it curious that I can ride the canter much easier on the trail. It's not that it is an easier canter, since he always feels short and fast to me, but he seems to be more balanced and comfortable if I allow him to canter or gallop with his head higher than I would doing dressage. When I ask him to bring his head down he really lands on the forehand. I've stopped doing that on trail. I just work on moving in rhythm with him and relaxing. 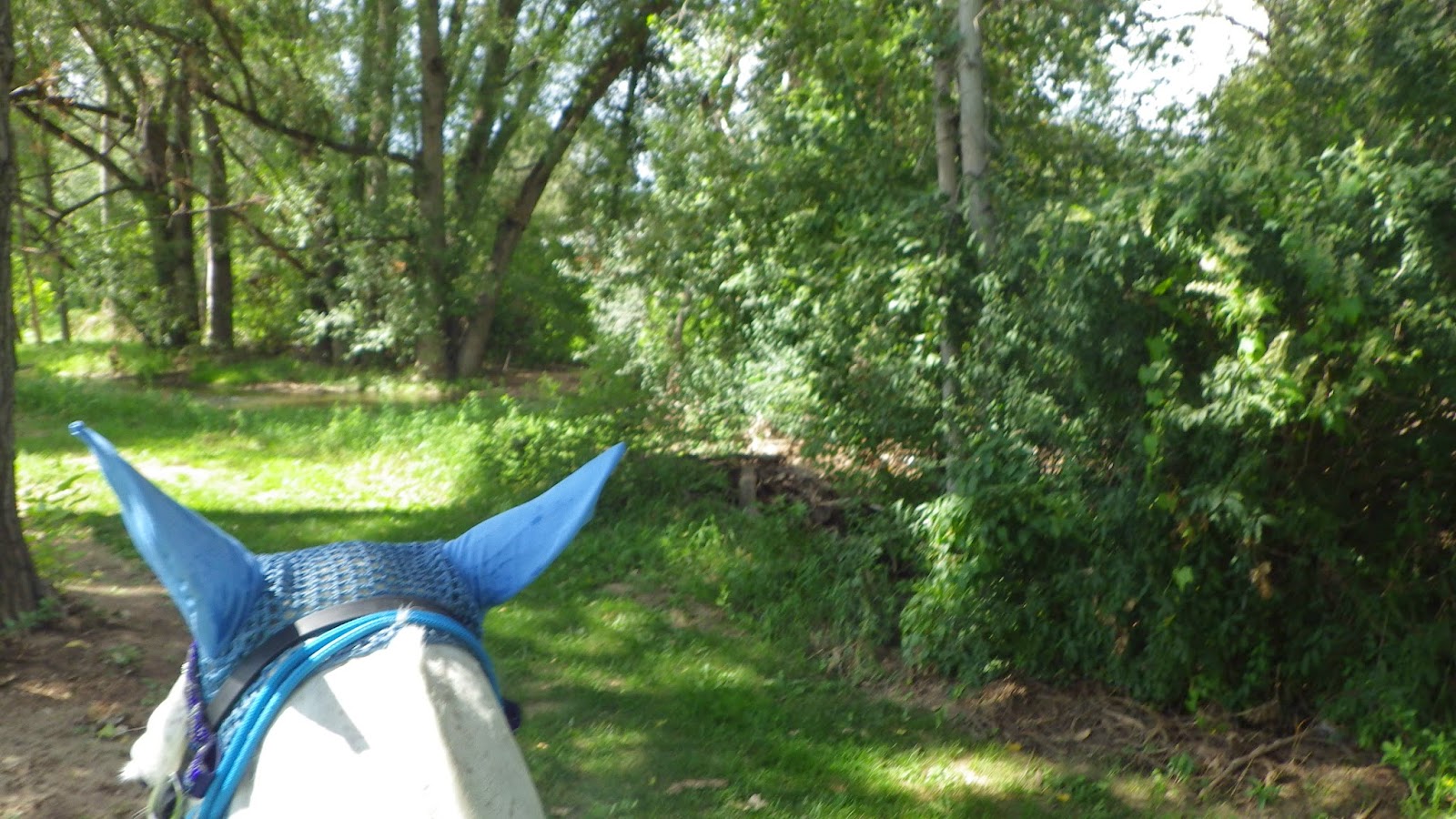 We stopped for lunch at the same place we did last ride. Ashke gorged himself on knee deep grass, while J and I devoured the food we had brought. I accidentally reset the Equitrack App. 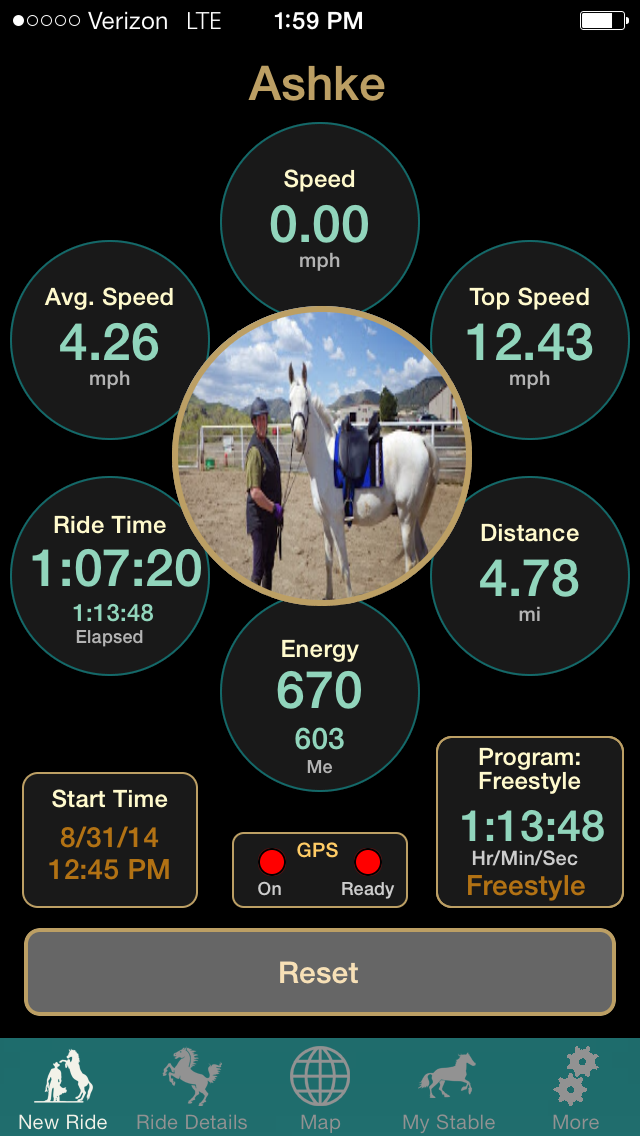 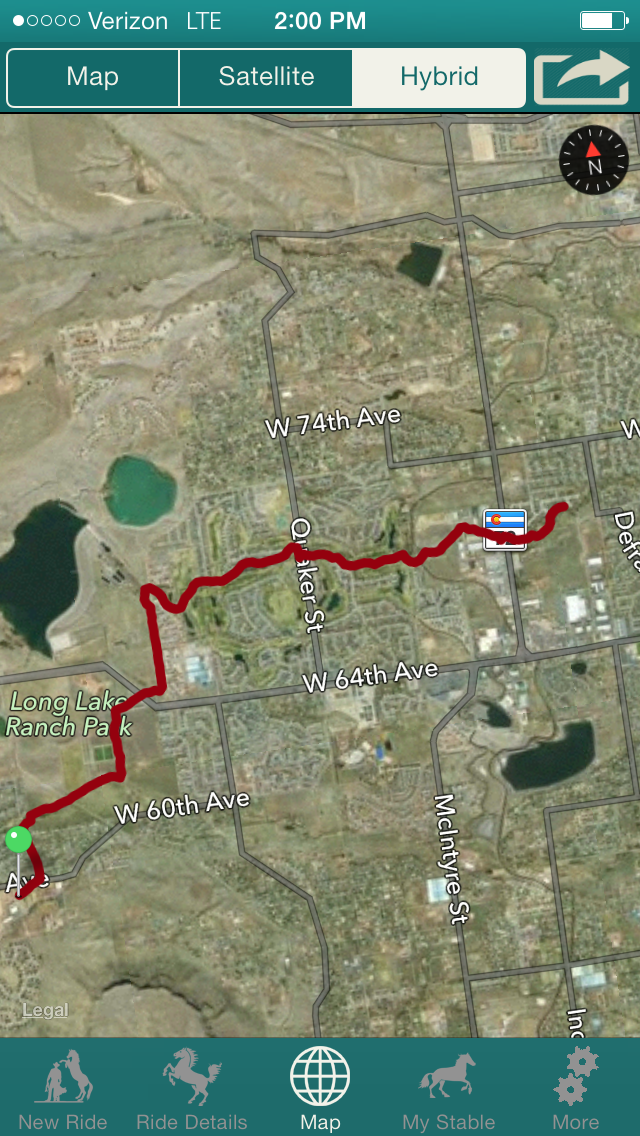 It was after this stop that I fixed the lead rope. Things picked up a bit, although there was still a lot of stopping, startling and staring. I had been keeping an eye on the sky and one of the storms just to the North of us was threatening. I checked our tracker and we had gone out 6.6 miles. J wanted to make sure she felt up to riding tomorrow, so we decided to head back. 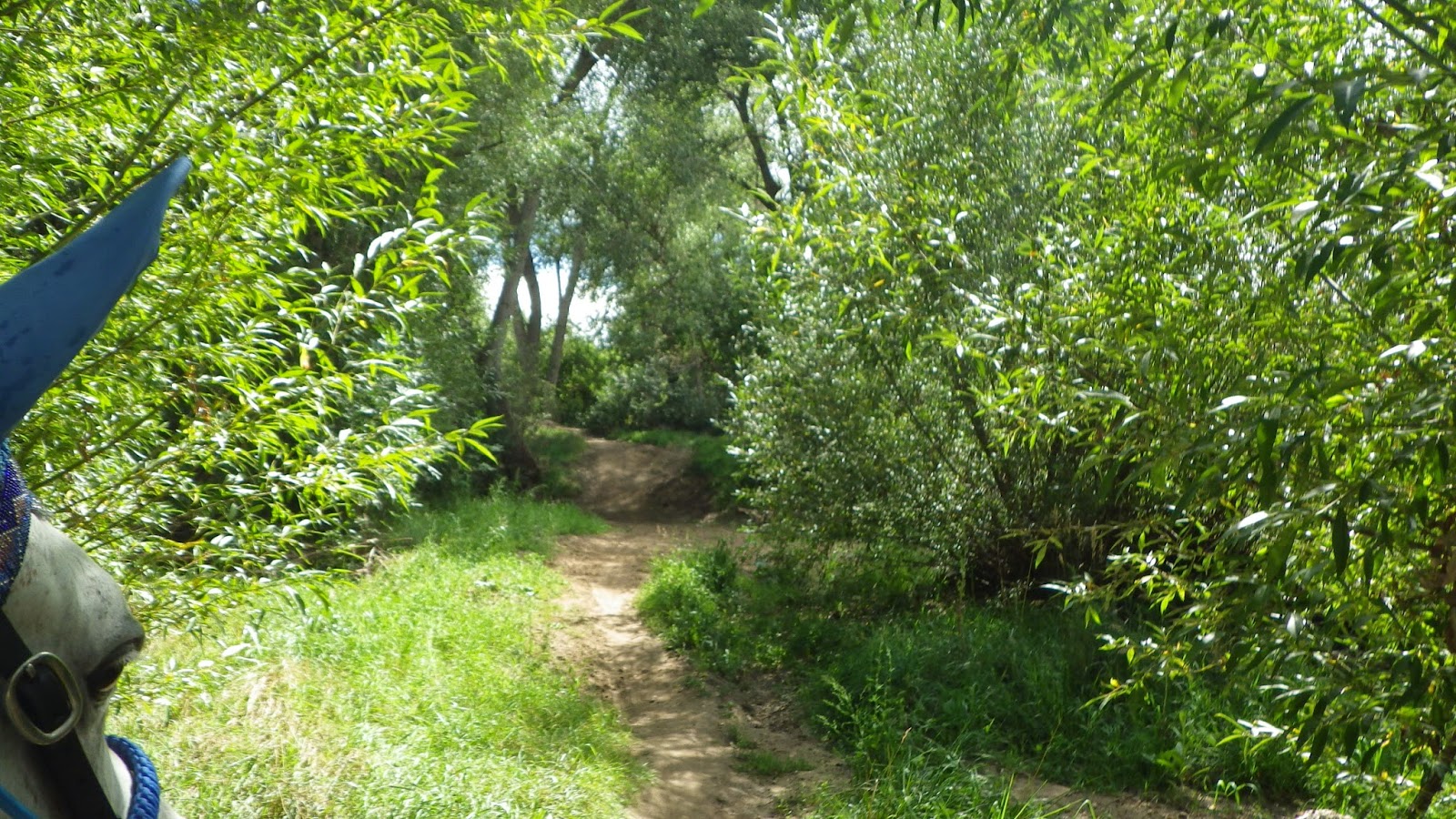 On our way back, I found a different trail to explore.  Just up over that hill was a pump track for BMX bikes. On the far right was a singletrack trail that lead off. 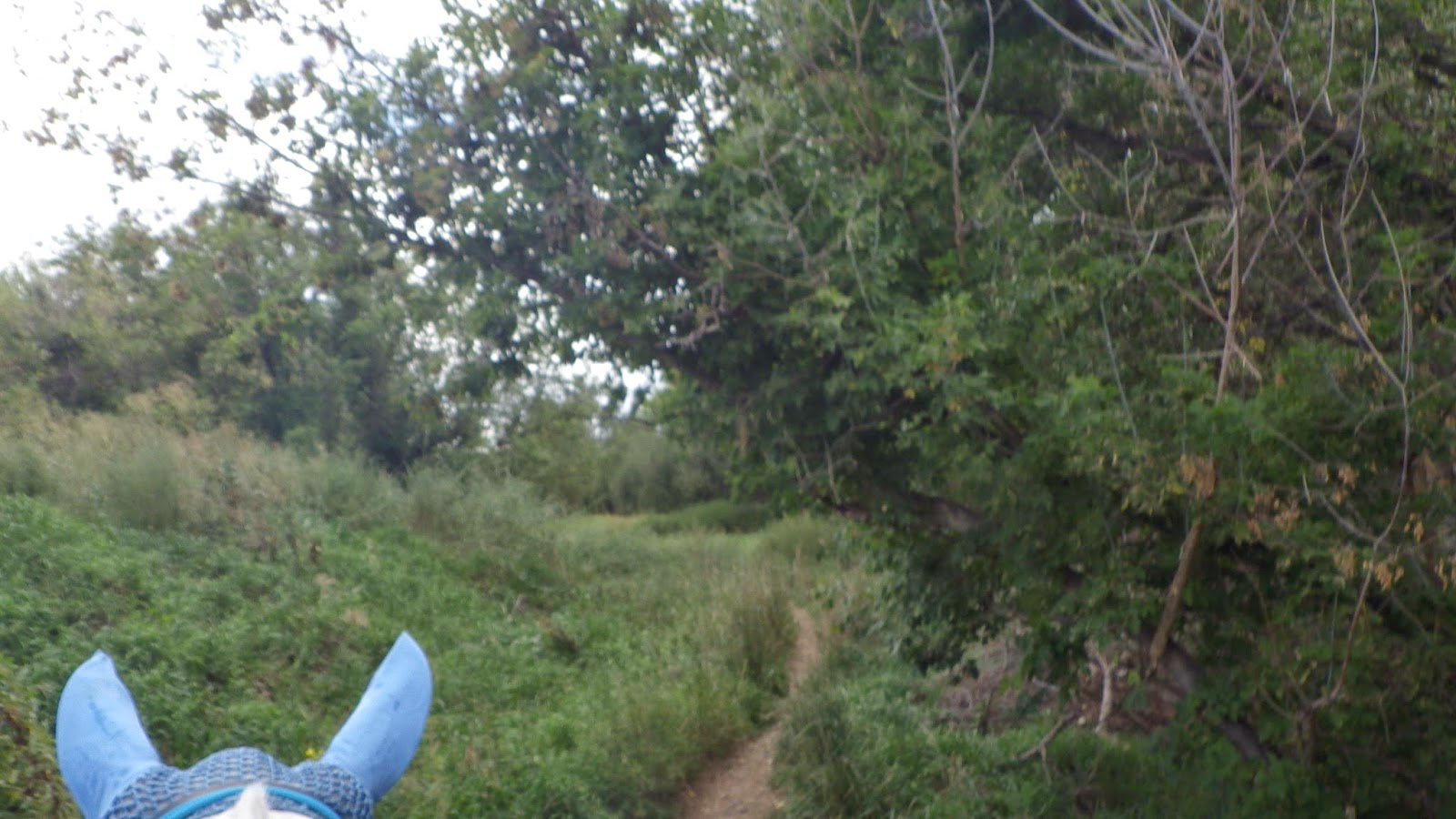 I am a lot like a cat. I absolutely could not go on without discovering where that trail went. It actually hooked back up to the sidewalk. When we got to an open meadow the single track became a car trail and I asked Ashke to canter. Four strides in he went sideways to avoid being eviscerated by a small bush. I asked J to go in front, since I did not want to be responsible for Ashke going into her to avoid the evil and ever present bushes. 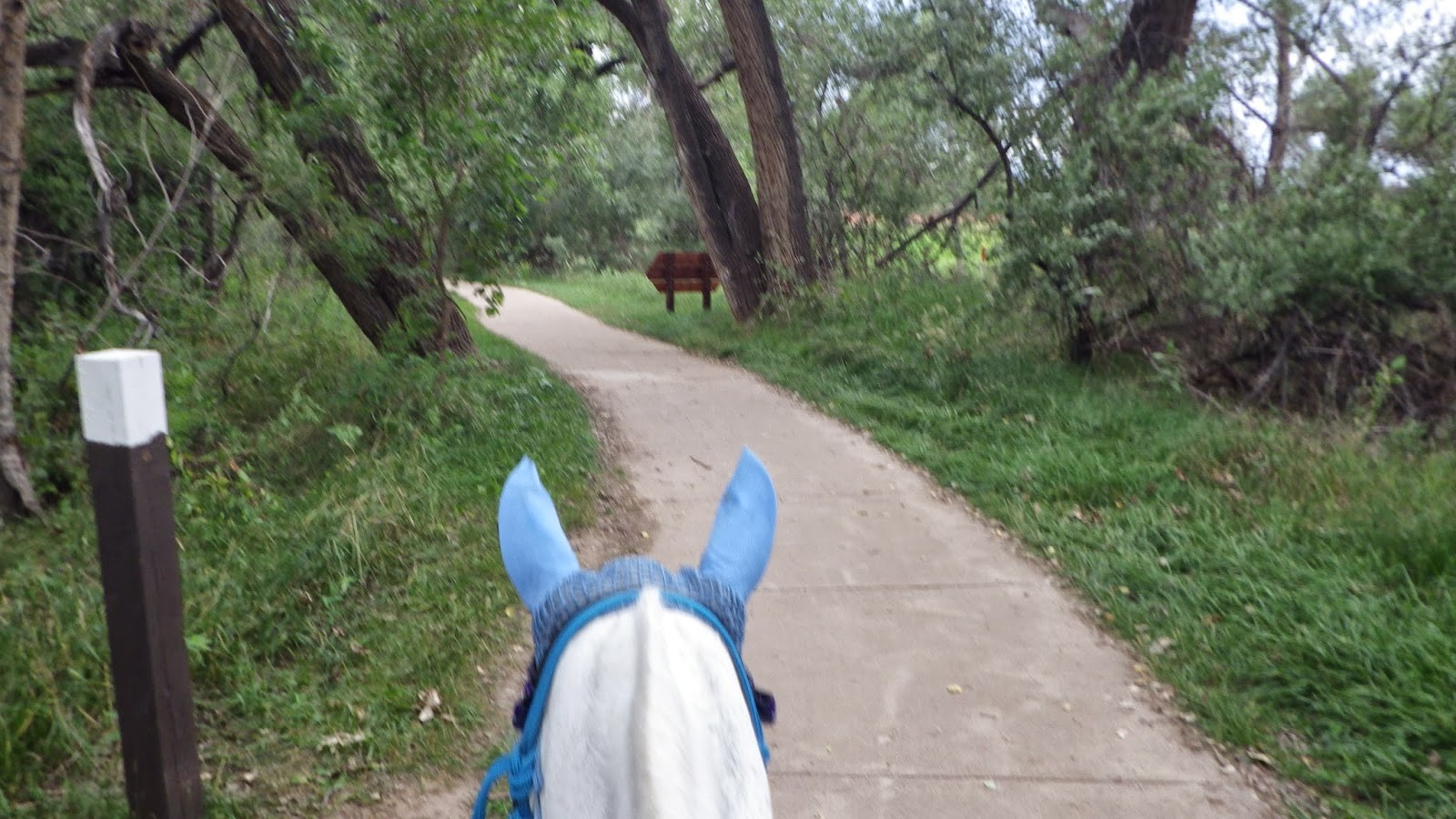 We found a couple of places where we could play in the stream. Ashke splashed and I refused to let him try to roll. He wasn't interested in drinking. 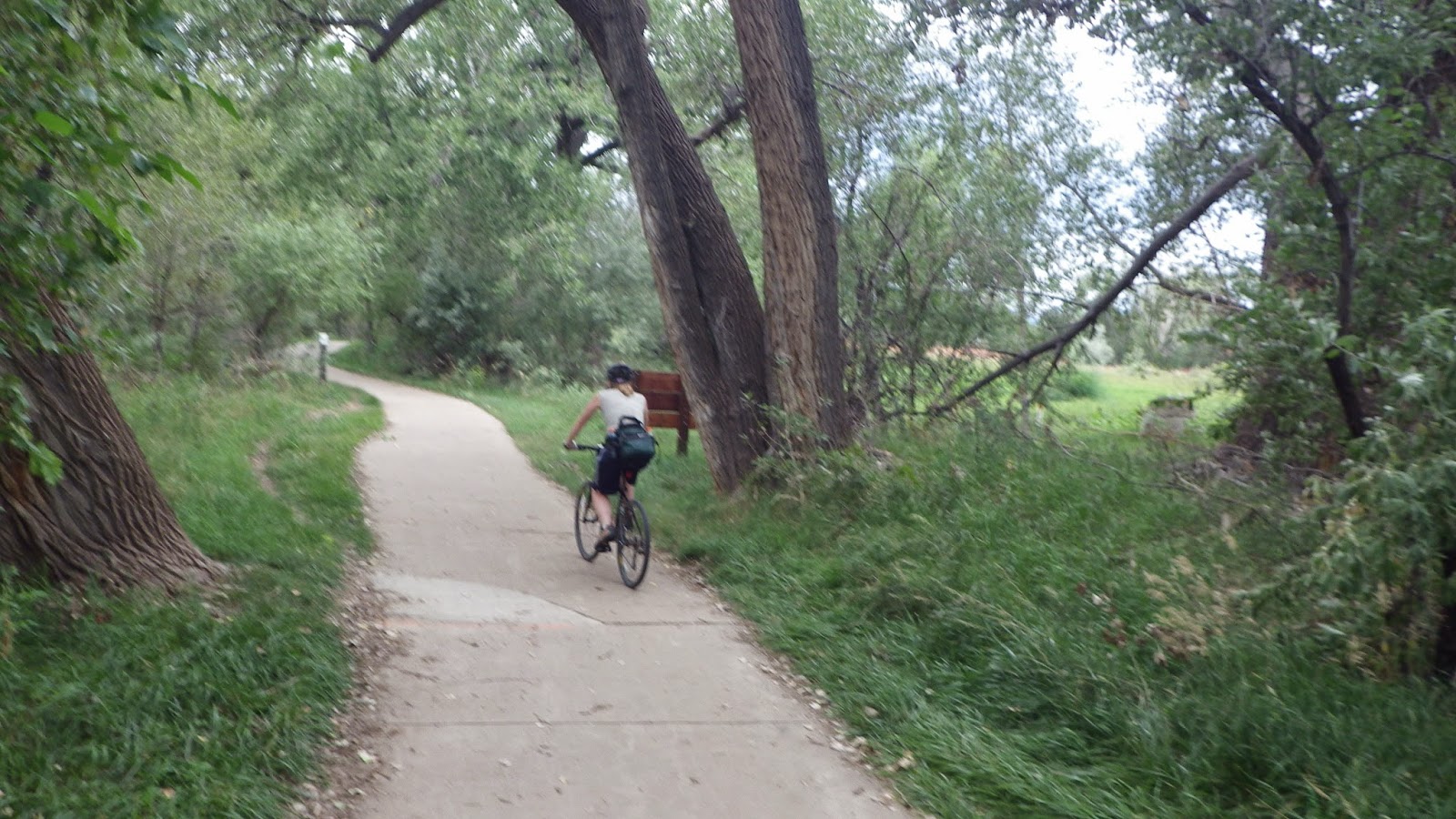 By the time we were almost back to where the Ralston meets the Fairmount, my knees were killing me. I pulled my right leg out of the stirrup and straightened it out. This conversation occurred:

"Mom! Mom!" (Ashke skitters sideways away from the foot)
What Ashke?
"OMG! What is that thing? It's scarey!!"
It's my foot, you idiot horse.
"No, no, no! That can't be your foot."
It's my foot. (Helpfully I wriggle it around as he continues to snort at it.)
"Put it back, Mom. Put it back. Feet don't stick out like that! It's gross."

I slid my right foot into the stirrup and pull my left one out, sticking it out in front of his shoulder.

Ashke skittered sideways the other direction, "Mom, Mom! The other one is broken now! Put it back! Put it back."

How many of you can scare your horse with your own foot? I am talented. 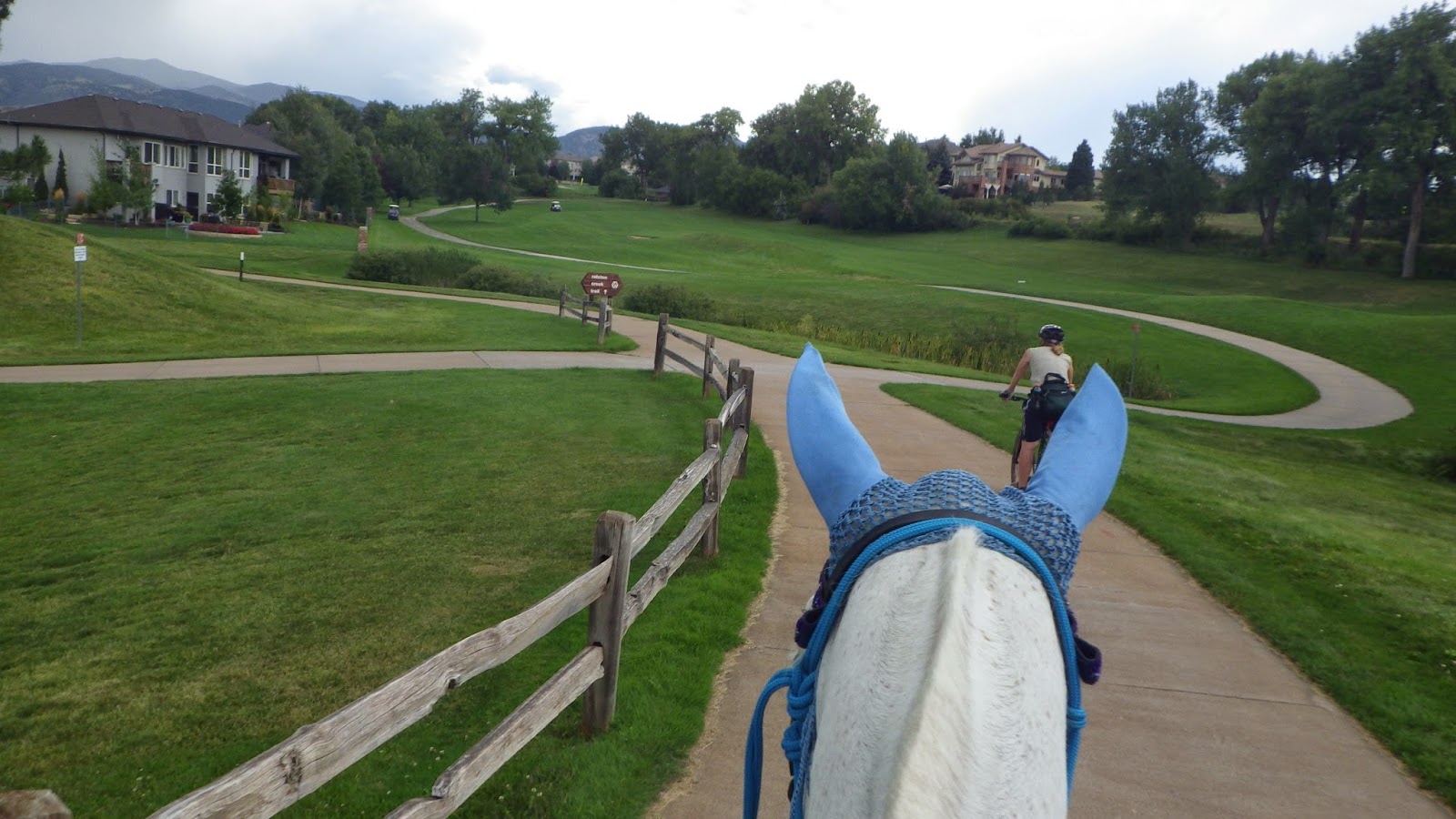 By the time we hit the golf course it was beginning to get very grey. The wind had died and we could hear thunder rumbling in the distance. 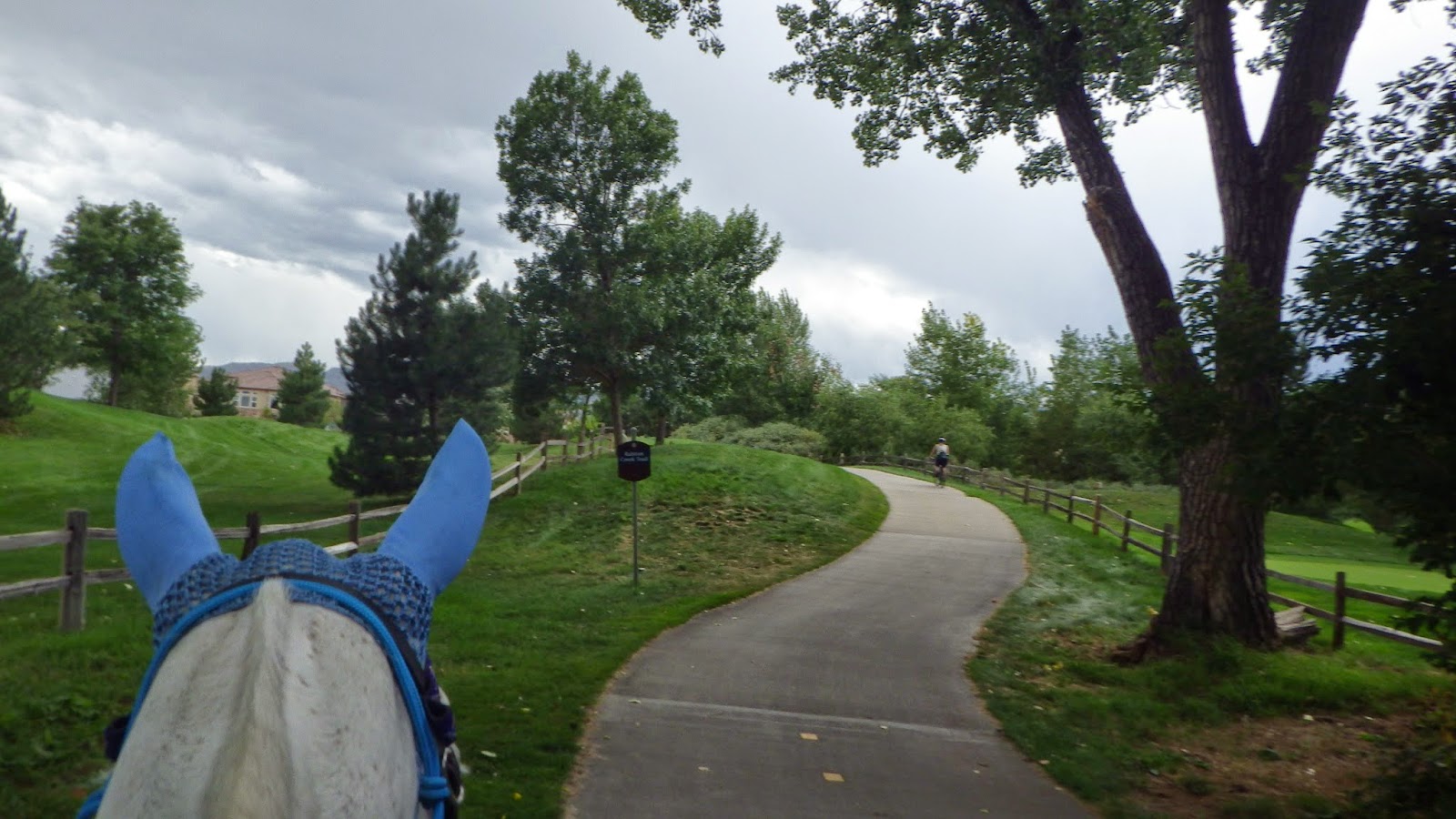 Just to the left, under the tree, is a set of small rolling hills. I rode it at a canter while giggling madly.

It was a lot of fun and I can see why fox hunts are so great. Well, except for the jumps. Just a bit after this Ashke stopped to pee. He moved more quickly after that. 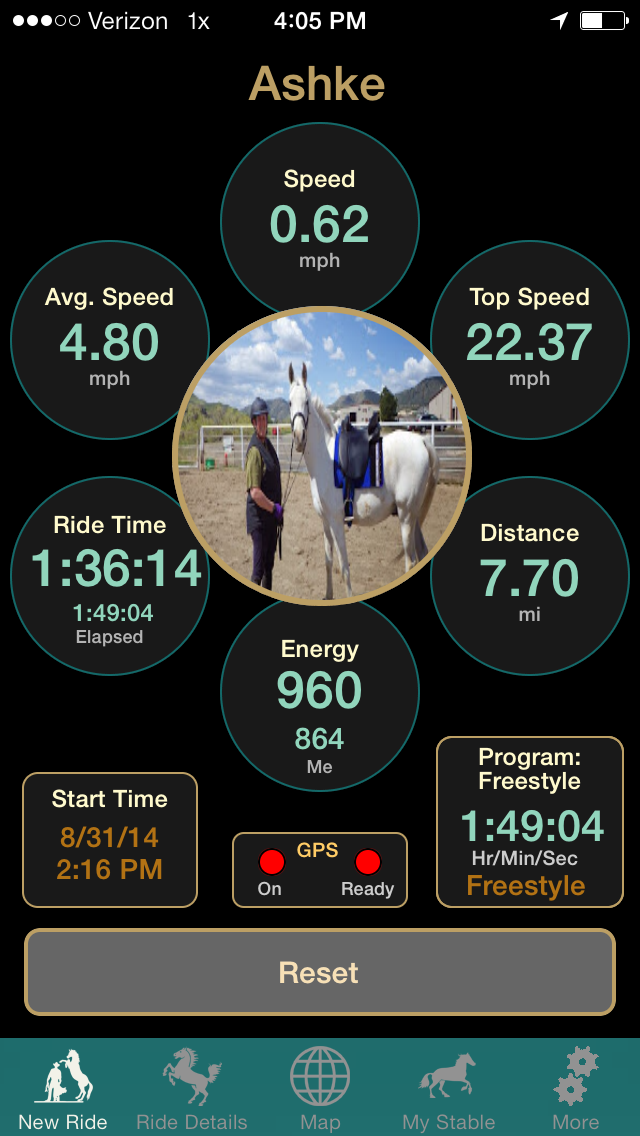 Combined with the early total: 12.5 miles in 2 hours 43 minutes. Personal best on both distance and time. 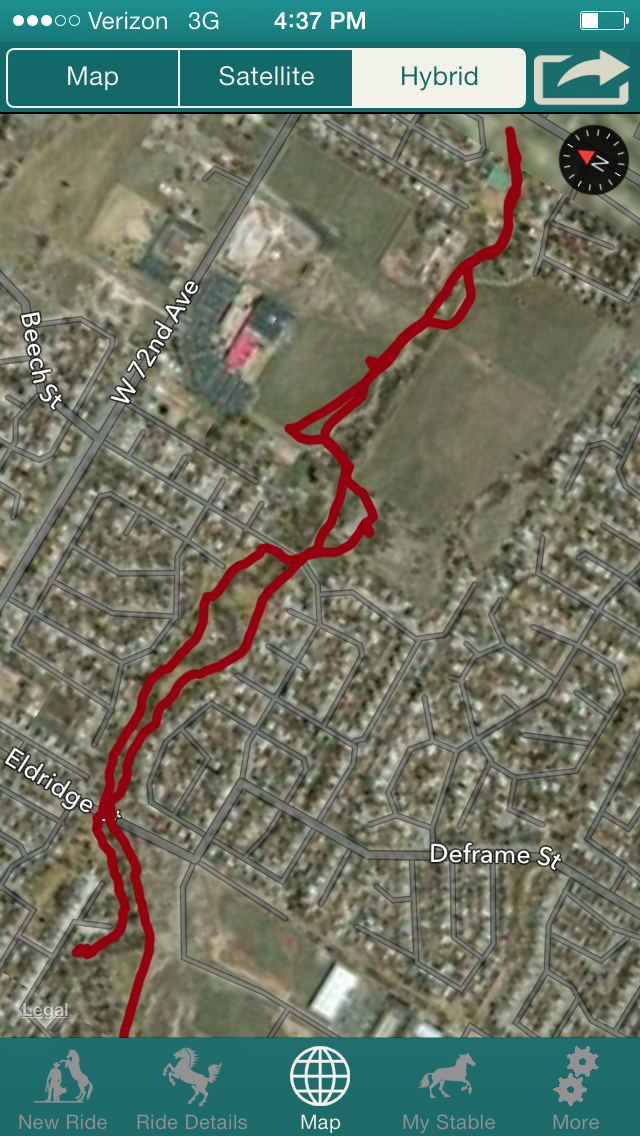 After two rides I am at 21.9 miles. That means tomorrow must be an 18 mile day. I don't see that happening.