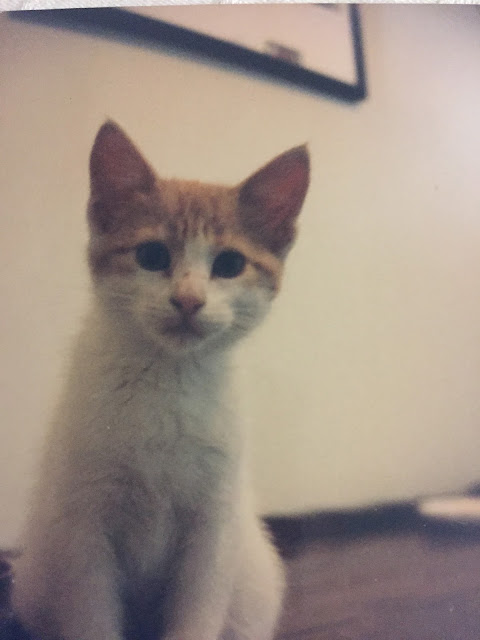 J and I first started living together in January of 1997. We had a two bedroom apartment that J had with a prior room mate, when the room mate decided to move back to where they had come from, taking her two cats with her. That was the first time J had ever lived with cats and she decided she really liked it. When her old room mate left, J brought home a cat that had been rescued from the street. She was a Russian Blue and gorgeous, but she never really settled into living happily with us. She took to carrying a stuffed animal around in her mouth, making mreow sounds. We misinterpreted that as a request for a small fluffy kitten. 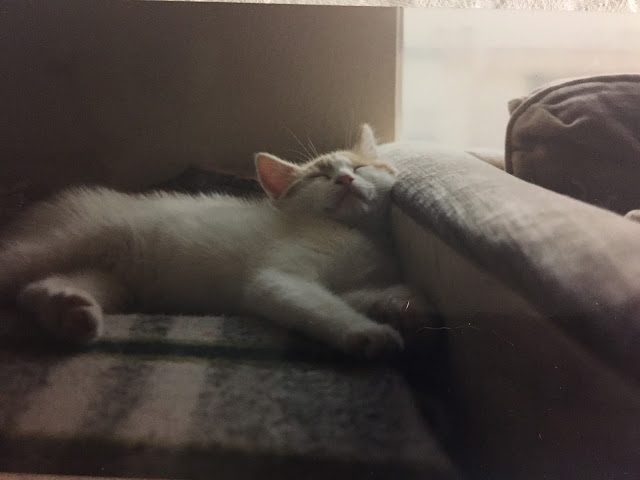 Taz was a barn kitten from a mixed litter and J fell in love at first sight. He was eight weeks old, so born sometime in December of 1996. We paid our $25 dollars and brought him home with us. He walked into the house, hissed at Ash, raced into the bedroom and peed on my pillow. That was our introduction to Taz. 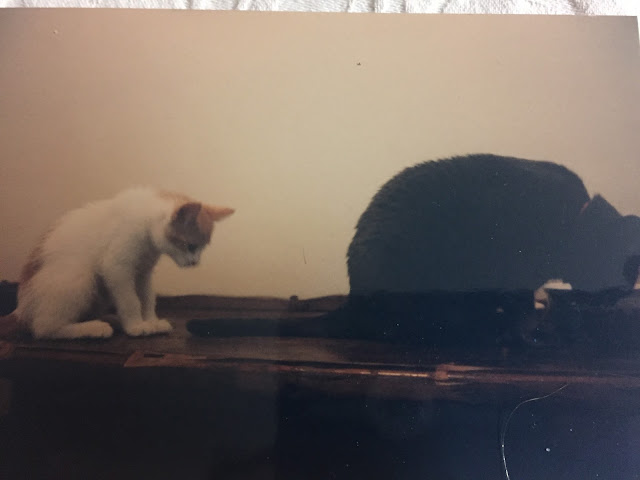 Ash was very unhappy and refused to bond with him at all. He took to trailing along after her and attacking her tail. She began to lose weight and make her displeasure known. We eventually rehomed her to a single cat house with a woman who doted on her, so they were both happy. 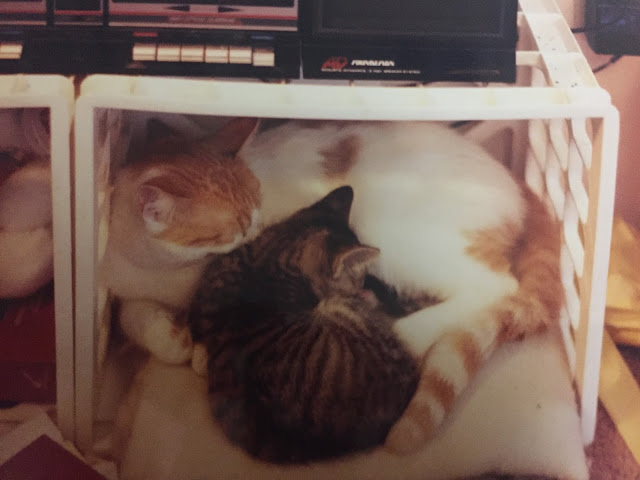 For Taz, we brought home Preacher, when Taz was about seven months old. Taz began to purr the moment he saw Preacher and the picture above is fifteen minutes after they first met. They were that close their entire lives. They were best buds right up until Preacher died. Taz, for his part, never really became house broke. He used the litter box intermittently at best. He really wanted to be an outdoor cat and I think if we had been out in the sticks he would  have been in and out of the house at will. Unfortunately, city living does not really make that a safe option. 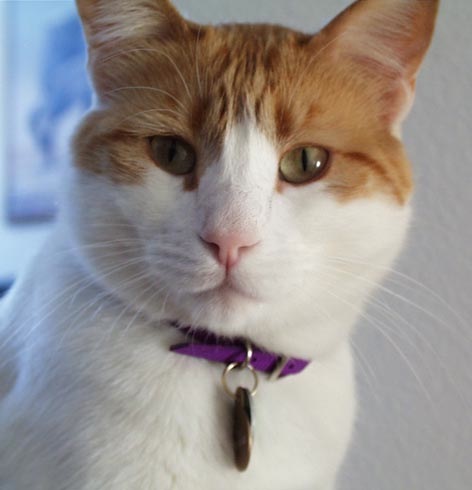 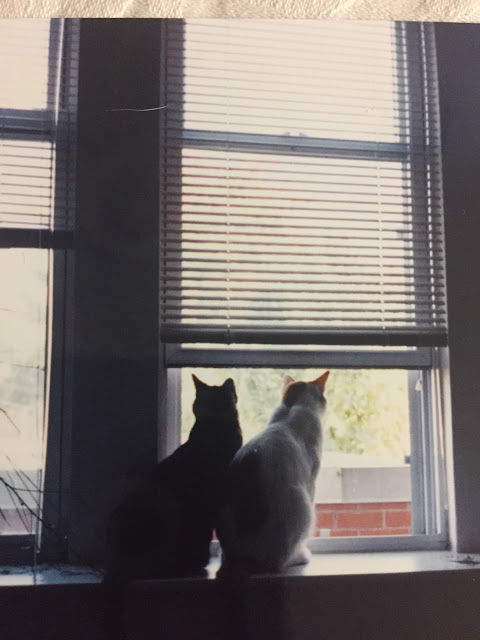 The windows were tall enough I could stand on the windowsill, which was about a foot above the floor, and not touch the top of the window.
We lived in an apartment with very high windows. The screens for those windows were taller than I am. Taz would climb them. The screens would fall out of the window. Taz would hoverboard on the screen to the ground some thirty feet below. Then he would take off into the bushes surrounding our apartment complex. One day I heard the screen come out of the window and him fall. I raced in and looked out the now wide open window to see him standing on the screen below me. I shouted Taz! His ears went back and his tail went straight up and he bolted across the parking lot. 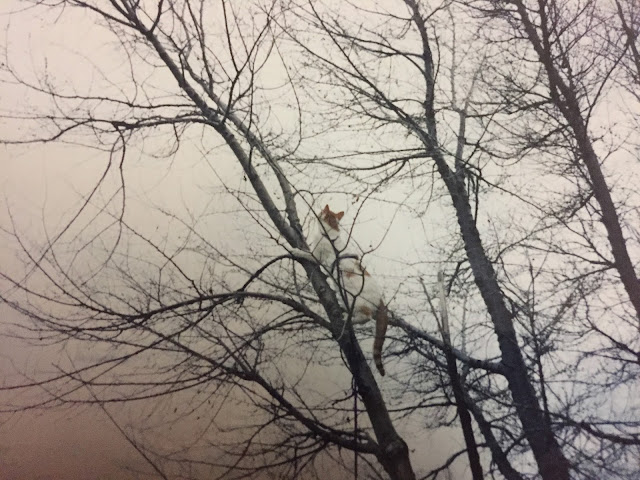 Taz up a tree, on leash

He loved to walk on leash. We had a harness for him and would take him to the neighborhood park where it was fairly quiet. He wasn't ever afraid of dogs and would arch and dance toward any that tried to bother him. He was a bruiser and never lost a fight. We would meander around the pond and he would chase bugs and leaves at the end of the leash. 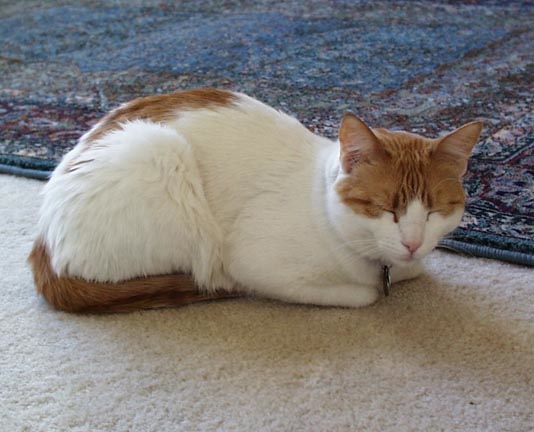 He loved to camp. We took him with us to Vedauwoo for years. There was a sagebrush place where the sage filled up a patch of ground. As soon as the truck would stop moving he was out and into that sagebrush patch, where he would hunt butterflies and mice. Every once in a while, J or I would call for him and he would come trotting out to say hi, but then went right back in. He loved climbing the pine trees, although the first time it took him most of a day to figure out how to come back down. Once he did, that became a favorite pass time. 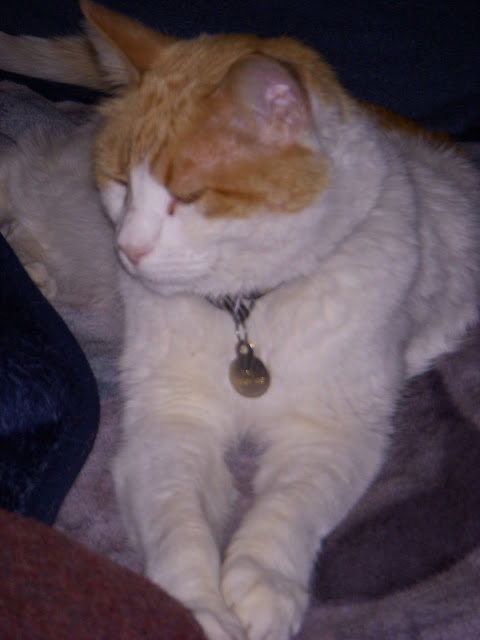 He loved J. She was his down to the bone. Even after he became frail, he would leave his warm hotel and curl up with her for hours on end. He was a bad boy in so many other ways - he never stopped peeing on all the things - but he loved her with everything he was. 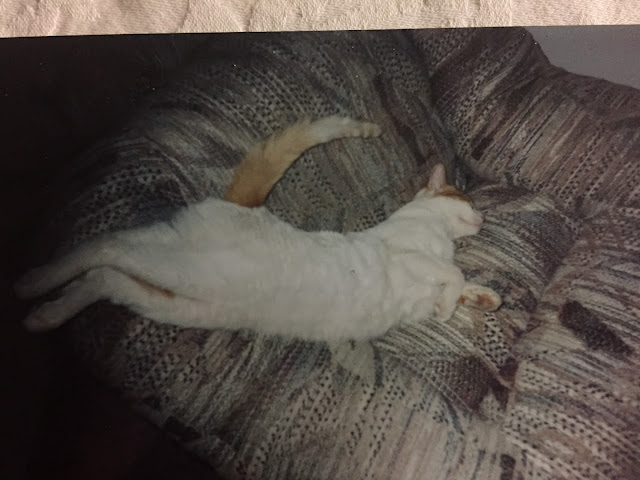 He went out on leash. The front of our condo has seven rose bushes and he would wander around under their leaves for hours. He caught birds. He hunted for mice. On occasion he would wander into the front room of our neighbor's condo and hiss at their cats. He would find a sunny spot and sun, then curl up under a bush and sleep the day away. He loved being outside and I know he would have been so happy to live on a farm or in a barn. 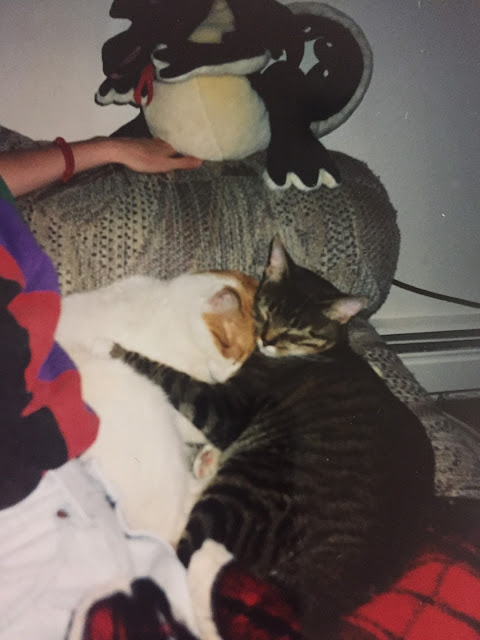 Ten years ago he moved into a room of his own. It had a cat tower, water, food and as he grew older, his own personal heater. Preacher shared it with him for the last four years or so of Preachers life. They were allowed out to socialize and love on their humans while under strict watch (otherwise pee) and Taz spent hours outside in the evening and on the weekends. He was very content and happy with his own kitten and their bachelor pad. 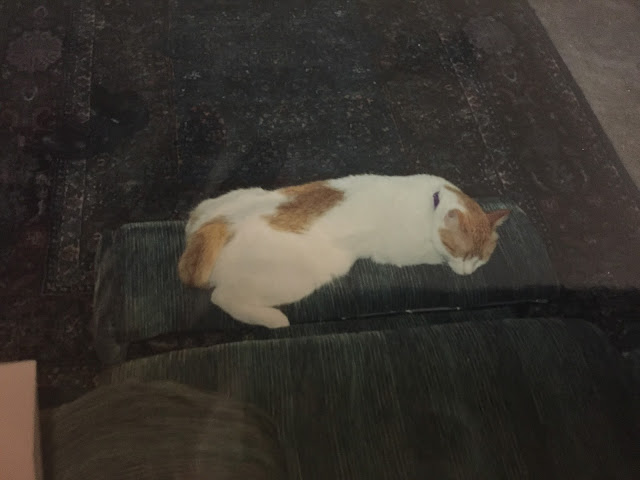 It's always difficult to watch an animal go into decline. You know the time is coming and all you can do is measure the waiting days against the pain and possible suffering the animal could be going through. We knew when Preacher went to the Bridge that it was a matter of time, but in that mysterious way that animals have, Taz outlived his kitten by almost three years. Preacher had always groomed Taz, who had long hair, and kept him free of mats. When Preacher left us, that task fell to J, who would spend time brushing his long hair out, trying to keep it from matting. At first I think Taz helped, but as time went on it was too much work. In October I brought home my horse clippers and we clipped the hair on his back and sides. I needed to do his legs and belly as well, but his tolerance was gone, so we left him that way. He seemed more comfortable and although the hair was shorter, he wasn't bald. I planned on working on his legs the next weekend, but we didn't have that much more time. 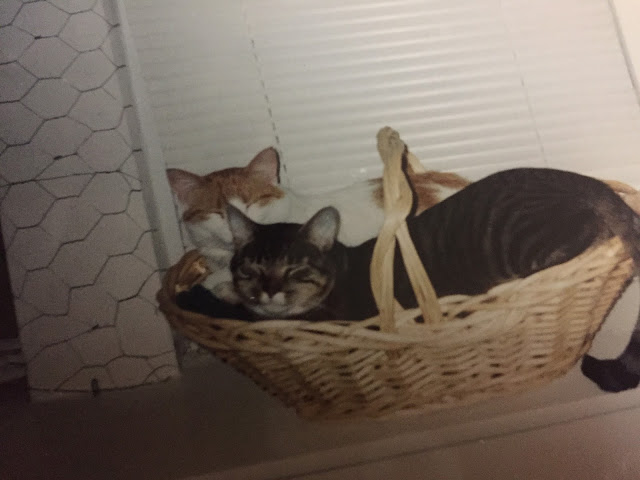 The weekend before Thanksgiving he stopped eating. We tried some raw food and tender morsels to see if we could whet his appetite, but to no avail. J spent a lot of time holding him over the weekend and on Monday night, she said it was time. The vet we use could not get us in on Monday night and so we rearranged schedules to take him in on Tuesday morning. J held him in her lap in the car while I made the arrangements, then we took him into the room. They administered a sedative, which he was a little fussy for, then settled into a semi-comatose state. J and I were both crying pretty hard by that time and in my head I asked Daniel to come and take him away. I had my hand on Taz's body when the doc began to administer the medicine that would stop his heart. 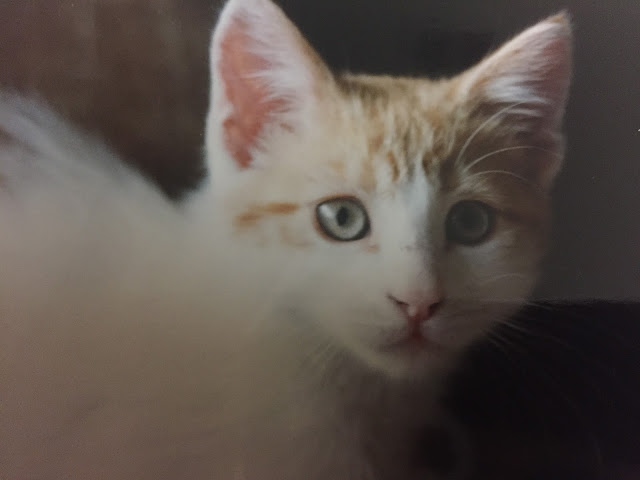 Daniel stepped up behind me and lifted Taz out of his body before his breathing stopped. I felt Taz pull free of his body and said, "he's gone" as his chest lifted another couple of breaths. He did great honor to J and me to be there so strongly when Taz passed. J smiled a few moments later and whispered "he's not in pain now and so very happy". He was in a tipi with Sitting Bull's wife (we don't know her name) playing with all of the feathers.