I woke up Tuesday morning at my normal 5:20 am time, stumbled to the bathroom and checked my phone. There was a text from A, which included a picture. My heart stopped. 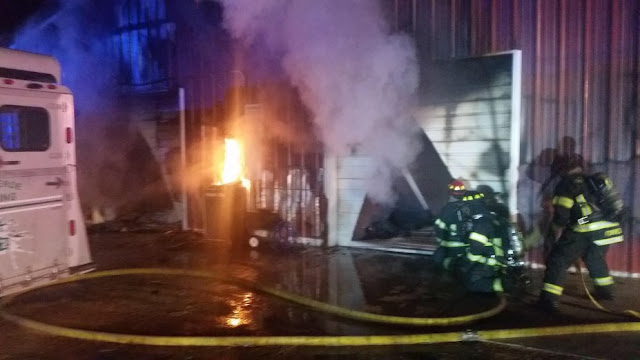 The caption said barn fire in Brighton.
Red siding. White garage doors. The picture I had received was much smaller.
I just couldn't tell.

I started frantically trying to find the address while my heart and mind screamed "no" silently. Over and over like you do when you really don't want it to be true. The unreal factor in your mind. Trying to find clues in the photo that would tell me for sure it wasn't my barn. I turned on the television while scrolling through the newscasts on my web browser, my heart in my throat. Finally, I found the information that the fire was further south and east, really in Adams county. Not my barn.

Thanking all of the Gods. Profusely. There were no words for the relief.

I don't know that there is anything more terrifying for a horse owner than a barn fire. There were sixteen horses that perished in the fire on Tuesday morning. It is believed that the fire started from a refrigerator or heating lamp housed inside the barn. The building was engulfed in flame when they got there and couldn't even attempt to get the horses out. The firefighters were hampered in fighting the fire due to the lack of a water source for their pump trucks, since the barn is not on city water. Water had to be hauled in for them to pump from.

I'm very thankful that it was not arson, because if someone was deliberately setting barn fires, no one would be safe.

I'm very thankful that my barn has outside doors for each run that can be opened from the outside, with a safe fenced area where the horses could be released safely, away from the flames. Because you want exit routes from burning buildings that make getting the horses to safety easier. And perimeter containment so you don't have to worry about finding them later.

I am so very, very thankful that my heart is safe.

I can only imagine what the other horse owners are feeling right now.
Posted by Cricket at 8:54 AM