The Saturday after Thanksgiving we did a ride at Chatfield with J, K and Tia. It was the final day in what has been a long, beautiful Indian Summer that stretched from the middle of September to the end of November. It was one of those late fall days where the sky is brilliant blue which enhances the golden colors of the dried grass. It was warm enough that I was riding in shirt sleeves and Tia stripped off her outer layers to ride in shirt sleeves as well. J had been really looking forward to riding the canal, although A couldn't join us, and Tia was game. The four of us took off down the trail on the east side of the South Platte. 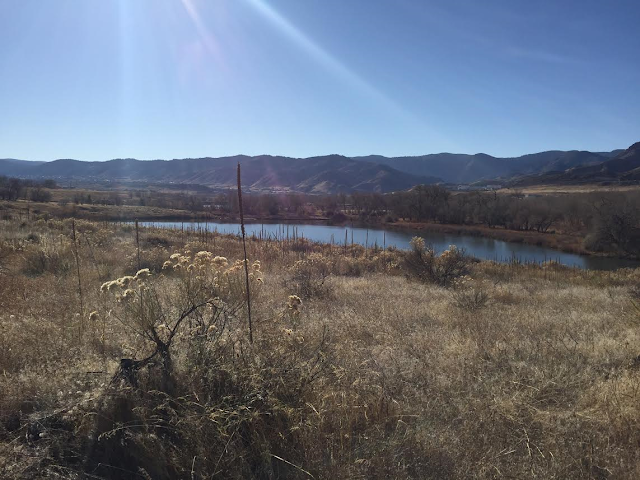 The temps were in the low 60's with no wind.
Just a stunning day. 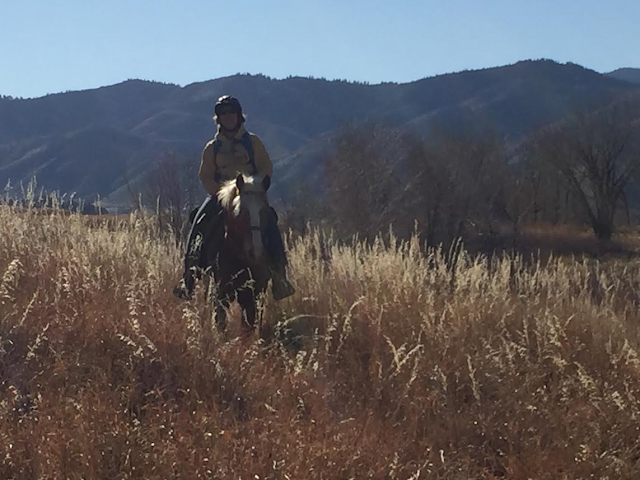 Eddy kind of blends into the colors of the field.

The trails through the grass are always a technical challenge for the bikes, since in some places the trail is deep in the ground with the sides coming up to the top of the bike tires. It seemed much easier for the bikes than the last time we rode this trail, seeing as the grass was much shorter in places and not so over grown. After about a mile downstream, we turn East and climb to the Highline Canal. 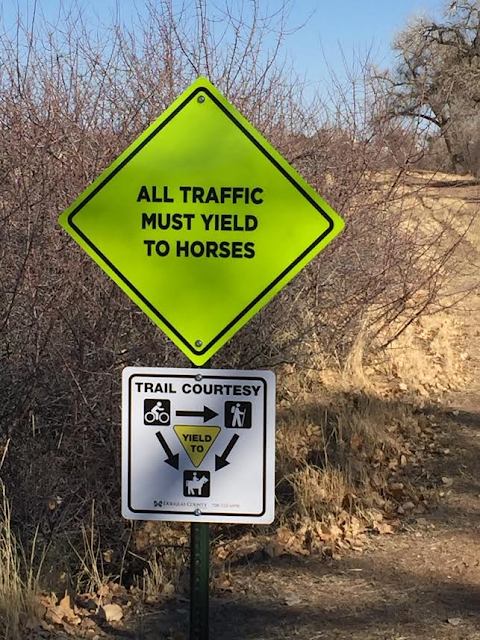 This sign was new. There is a couple of huge stables that are right on the canal. I wondered if those riders were having issues with the bike riders on trail.

For part of the canal Ashke and Eddy were in front of the bikes, but then deer started to leap out of the canal, cross the trail in front of us, and bound away toward the river. The first time that happened it was a six or eight point buck, with deep black points of color under his jaw and belly. He stopped in the middle of the path and watched us as K and I held the horses still to watch him back. Finally, his curiosity satisfied, he bounded effortlessly over the fence, heading west toward the river. We continued on and came upon this: 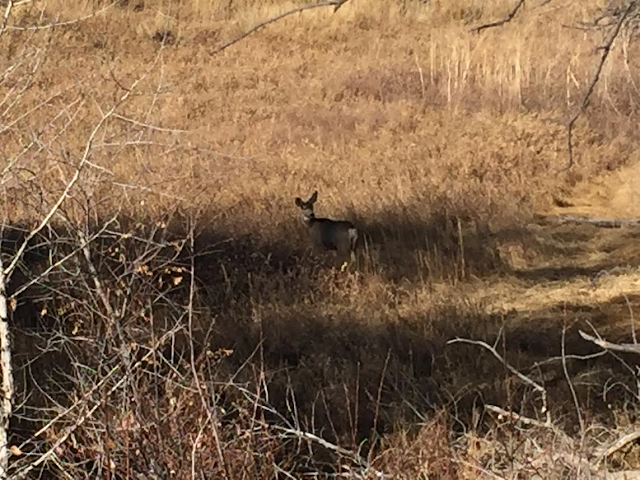 Eddy alerted us to this one. J said there were a group of five of them down there.

Needless to say, the horses became more nervous and twitchy. I asked J and Tia to go ahead, thinking they would flush the deer out, plus Ashke is a little less spooky when J is leading. I tried a brief canter along the canal, but he was bouncing so badly in response to the potential deer, that we just settled into a trot, while Eddy pulled up next to us. As we caught up to J and Tia, K and Eddy surged ahead and pulled up next to Tia. I held Ashke back, not wanting to get that close to the bikes, knowing it was risking an accident.

Sure enough. Something rustled in the canal and Eddy spooked sideways and back, throwing K over his shoulder, and crashing into Tia. Tia told me afterwards she thought Eddy was falling on her. I knew, from my vantage point a couple of horse lengths back, that he had finally done what I had warned K about over and over and over. He had spooked sideways and not given any fucks about running over the person next to him. Tia went down to the ground and he stepped on her lower leg and the bike tire, while still spinning away. K, on her belly on the ground, had a hold of his reins and got him stopped. Tia scrabbled away from the bike and up against the fence that borders the canal and began her assessment. J had dropped her bike and came back to settle Eddy, since he was still terrified. She calmed him down and then handed me the reins so she could go help Tia.

Tia has NOLS training and we both knew that she had both the presence of mind and training to self-assess. I was watching her from on top of Ashke (who had moved back a couple of steps but held stock still during the accident - such a good boy) and saw her assess her leg. That was the one thing I was most concerned about, since I had seen Eddy come down square on her leg just above the ankle. I truly believe that had the frame of the bike not been there to support the bone, it would have broken Tia's tibia. As it was, she was deeply bruised on the outside of her leg from his hoof and the inside of her leg from the frame of the bike, but nothing was broken. J gave her a compression wrap to help keep the swelling down, some advil to help with inflammation, and double checked her pupils for signs of a concussion. Luckily, she had taken the impact on her shoulder, and although she would see a chiropractor the following week to get treatment for whiplash, she hadn't hit her head.

J also checked on K, who had gotten up and taken Eddy from me. She seemed fine. Eddy was fine. Tia's back bike tire was completely bent and two of the spokes were broken. There was no way she was going to be able to ride back to the trailer. She and J carried the bike and tire back to the road access we had just passed and left her there to wait for us. J, K and myself headed back to the horse trailer with as much speed as felt safe, with Ashke following J at a mix of trot and canter.

Once at the trailer, tack was stripped quickly and the horses were loaded. We had ridden about five miles and neither of the horses were hot or sweaty. Once loaded, I guided J through the back streets to where we had left Tia, loaded her and her bike, then headed for home.

It was not the best way to end our final ride of the fall. Winter is coming and trail riding times and places will be very limited.