Friday was a great day!!

First, I had an appointment with a new saddle fitter, Megan Shroyer Pifer (using her name to help drive her business), who is a friend of AM, the woman I am taking dressage lessons from. Anyway, I saw Megan's post on FB talking about saddle fitting and responded, wanting to know if she could fit an Alta Escuela. Unlike pretty much everyone, not only did she know what an Alta was, but she knew Ludomar of Spain (where I got the saddle from) and said yes, she could definitely work on the saddle. We made an appointment for Friday at 9 am.

Okay, I was skeptical about paying to have another saddle fitter come out. My last two experiences have not been great and I paid out a lot of money for nothing. I was hoping this wasn't going to be the same situation all over again. I was a bit defensive, because while I might not know everything about fitting a saddle, I have read a lot, mapped my horse's back, and educated myself as well as I could. I had also talked to Saiph about her Alta and the reflocking she had done, so I knew how to proceed.

As a reminder, the last woman who came out wanted to remove padding from the bars and the front of the saddle and raise the back of the saddle, which would have created more pressure on his shoulder and could have increased the bridging in his back. When Megan got there I was very upfront about the saddle and what I was seeing. I figured I might as well be completely honest about where I was coming from: I told her that the saddle fit him very well, that I had very even sweat patterns on both sides, that Dr Wagner had evaluated it and thought there was some slight bridging on the left pattern where the pressure wasn't even, and that I had no intention of getting a new saddle.

Megan laughed and said that was good since she didn't have any saddles to show me. She said she was familiar with both Alta's and Ludomar and it sounded like the saddle just needed some adjustments. So relieved. I told her that I have done a lot of reading and that I really want to learn about saddle fitting/adjusting the flocking and to please show me everything, which she did.

Megan started by placing the saddle on Ashke's back and evaluating the fit. She noted that there was some slight bridging on both sides (damn stall rest) but that the extreme asymmetrical nature of his withers was resolving (yeah for long rides on trail and dressage!!) She said she wanted to bevel the flocking back at the wither to allow a little more room for his scapula, without effecting the fit, and would adjust the flocking to fix the bridging.

I asked her if we would be doing the flocking there and she laughed and said yes, since she needed to check the fit as she went (I was very happy since the idea of the saddle fitter taking the saddle home to take apart and possibly not put it back together was enough to give me nightmares). She pulled a table out of her car, covered it with a blanket and we set the saddle on it.

The first thing Megan showed me was how to evaluate the panels. By running your hand from the back to the front, using the palm only, you can feel the areas where the panel is not even, either from the flocking knotting up and creating a mat, or from the dips where the flocking has moved away from other areas. There were definite knots toward the back of the panel and dips in the bar area. Megan pulled out her tools and began to work on the issue.

First she used the blocking mallet thingy to break up the wool in the panel, to loosen it and move it around a bit. 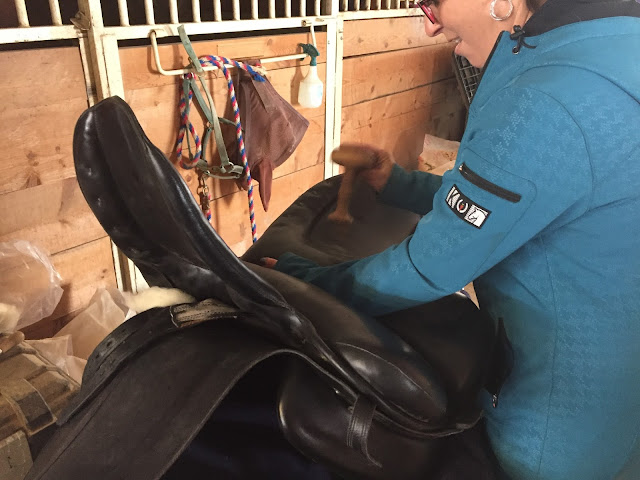 The mallet was pretty cool and within a few minutes a lot of the lumps and bumps in the panels were gone.

Then we removed the screws from the front of the saddle, where it held the panels to the tree. Left first and then the right. There was a small access area at the very front for flocking purposes, although Megan did say that if the back of the panel ever needed serious adjustments, she might have to cut another access slit further back. Luckily, the work she needed to do was in the bar area and the front of the saddle. 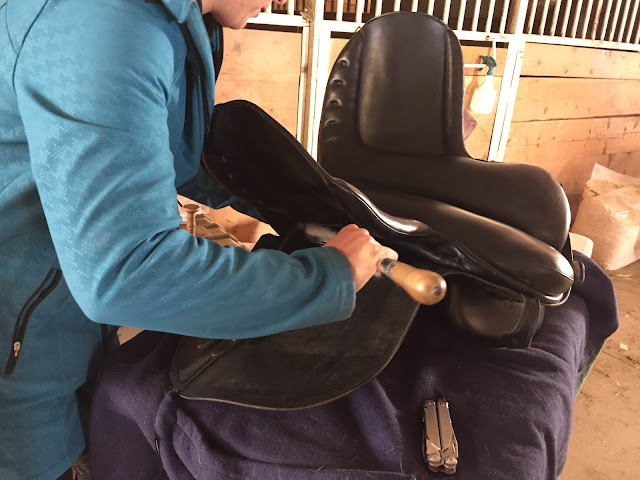 Megan using the flocking tool to insert long wool fibers into the saddle.

When I asked about the wool, since I have a bale of saddle fitting wool still sitting in my office for the day when I start fixing my own saddles, and Megan told me that she prefers wool with long fibers. The long fibers seem to work better with saddle panels and tend to hold up/not mat as bad in the long run. 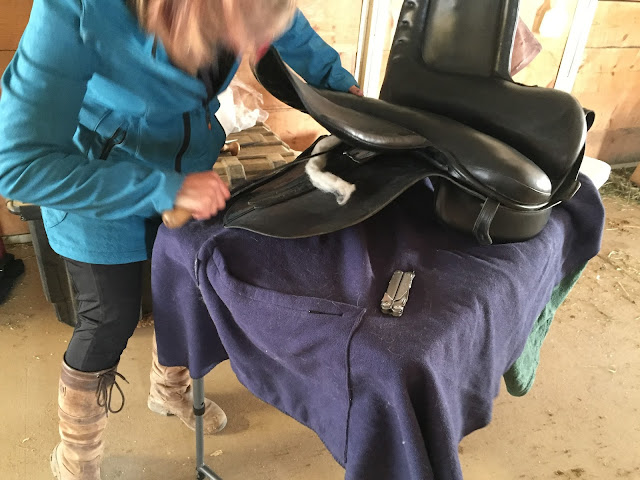 Working the wool in from the small slot at the front of the saddle. 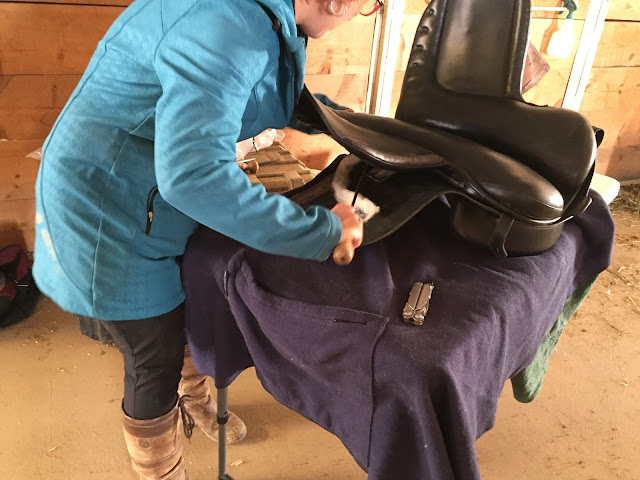 The flocking tool has a niche in it that grabs hold of the wool, allowing Megan to move it into the panel where she wants it. 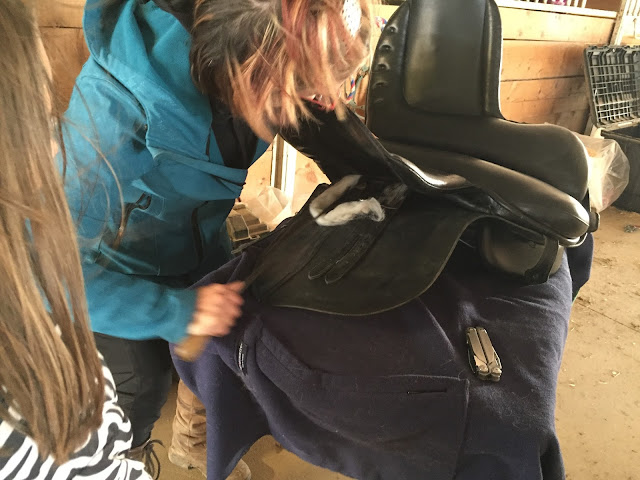 She worked in several long strands of wool on each side of the saddle until it was smooth and even. 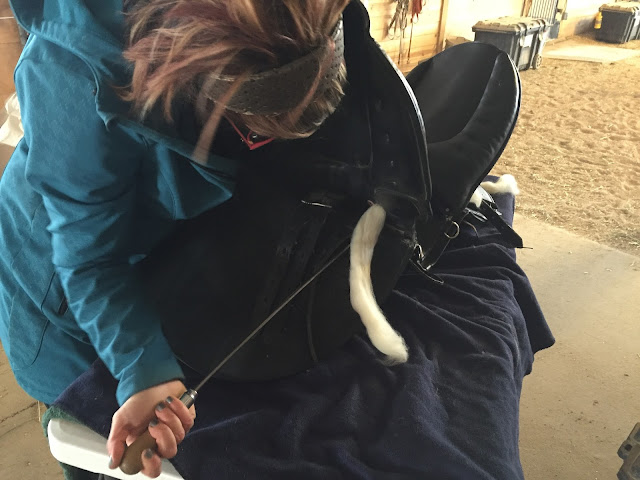 Working on the other side of the saddle. Lots of yummy woolness going in.
I covet my own set of saddle flocking irons, although maybe I'll just hang out with Megan and watch her work. 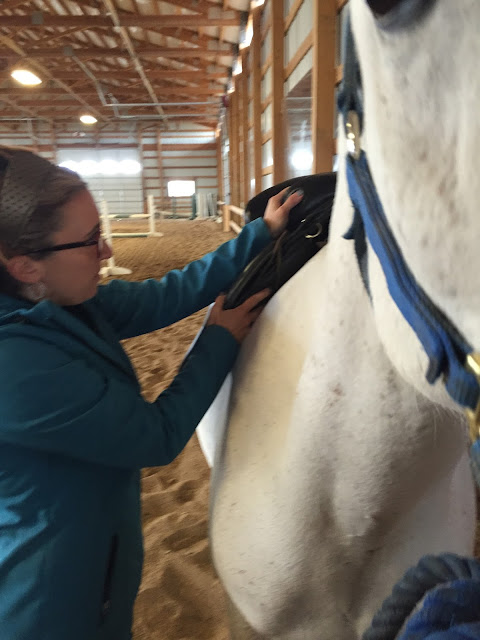 Fitting the saddle to Ashke's back. Megan checking the front of the saddle where she moved the flocking back away from the shoulder. 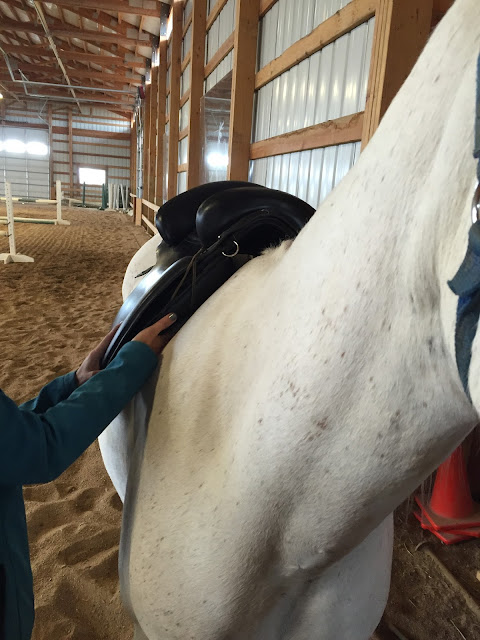 Happy with how it is fitting.

Megan had me ride to see how it felt. Ashke seemed happy and willing to lift his back and move with some contact even if we weren't warmed up. It would take a real ride and some sweat to see if the issues I had seen were resolved (hair ruffed up across the bars). 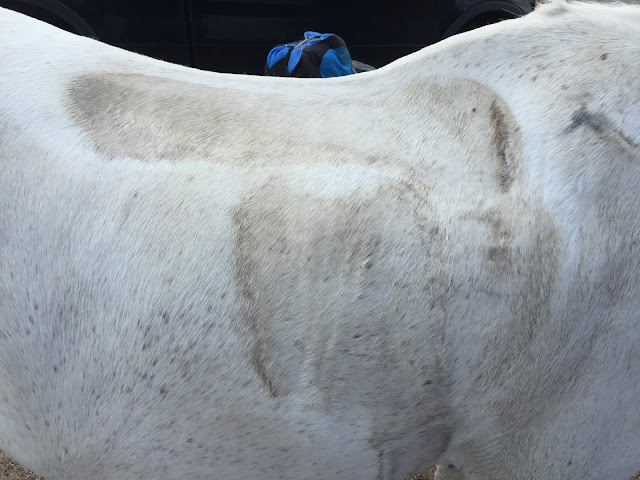 Sweat pattern after a 7 mile ride.
The hair rub that I was seeing despite the even sweat pattern has been completely resolved. 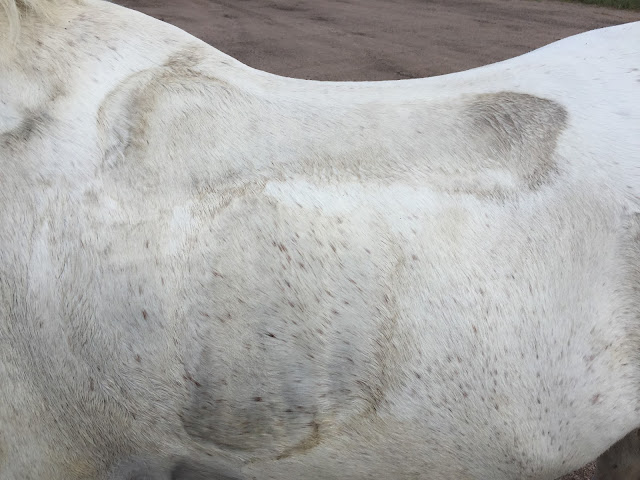 The darker pattern at the back is due to the immense amount of dirt on my horses rear end, thanks to the Colorado unsettled weather pattern. This boy is very dirty.

A huge thank you to Megan for such a great job. I'm so happy I found you!!! Even more happy you are moving to my barn in the near future.

During that same time, Dr Long showed up to check out the wound. 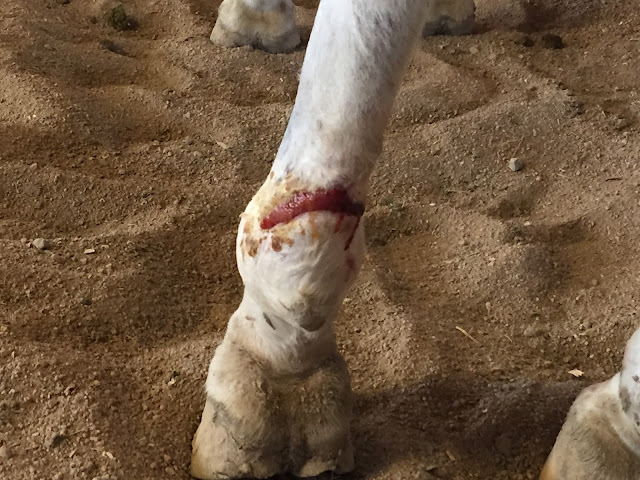 The first words out of Doc's mouth was "that looks wonderful".
Minimal proud flesh and no need to excise anything!!!
He gave me some steriod ointment and told me to do 48 hours with it on, 24 hours unbandaged.
Ashke of course, itched it immediately with the other hoof and caused it to bleed.

I was so happy I was skipping around the barn!!