Ashke whinnied at me four times between the door and his stall today. He seemed in good spirits and stuck his head in his halter for me. I dumped feed in his bucket to keep him still while I cut off the bandage, then walked him to the wash stall to cold hose. The only part of his leg that is still swollen is right where the injury is. The rest of his leg is tight and cool. The wound is still a bit warm, but the redness has receeded and over all the wound looks clean. I need to treat it with Betadine to get it to dry out and form a scab. Saiph said that Betadine is the best thing. That will happen tomorrow. Hopefully, in a few days it will have a scab and I can start leaving the bandaging off of it most of the time. 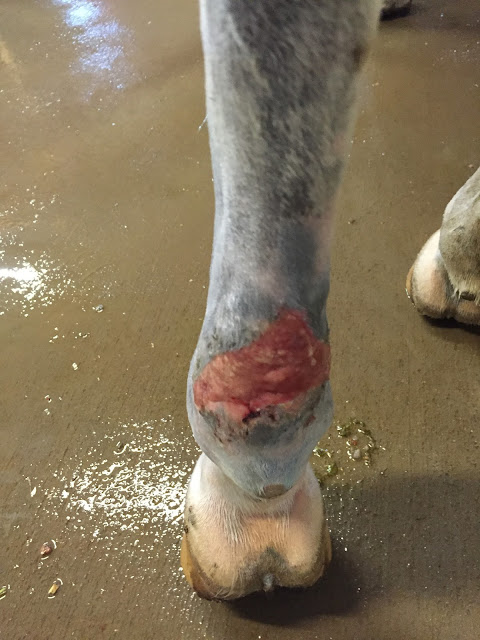 Ashke was great in the wash stall. He followed me around as I moved muck buckets and brooms, then positioned himself against the wall, turned his head and watched me as I ran the cold water over his leg. He didn't fuss, but relaxed as I rested my head on his flank and talked to him as the water washed off the wound. 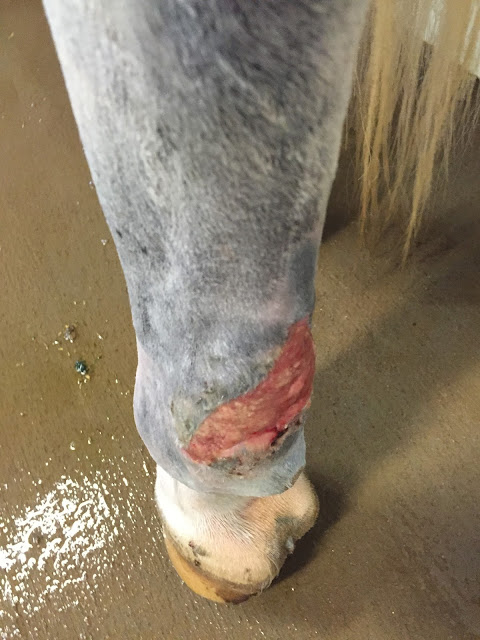 Overall, I think the pain has diminished a lot. I was able to probe the edges of the wound without him trying to move away. There is one little spot that is still kind of bloody but there was no blood in the bandaging or when I washed him off. It just looks a bit redder than the surrounding tissue. 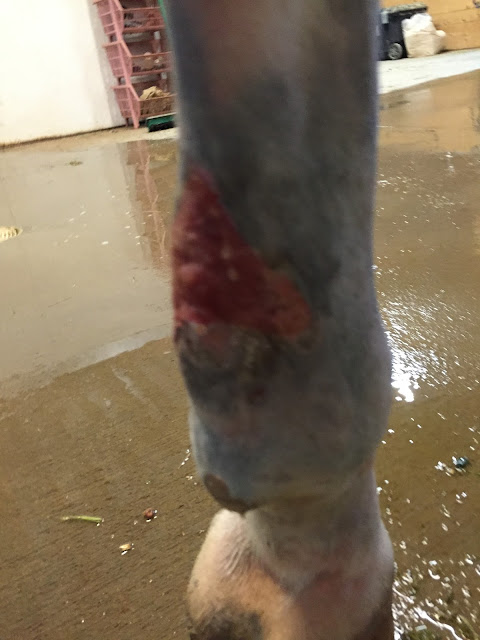 The edges are not the bright blood red they were the last bandage change and he was less reluctant to put weight on the leg as I was wrapping it.

Tomorrow I will start to treat it to get it to dry out and form a scab. Once we have a solid scab, I will see if the BO will do a polo wrap on that leg before turnout and then take it off afterwards. I know it still needs some protection, but I don't want it wrapped and wet all of the time. I'm hoping to be able to ride tomorrow, but the weather doesn't look like it wants to cooperate, so it will be an arena ride, at the least.

The other projects I'm working on: 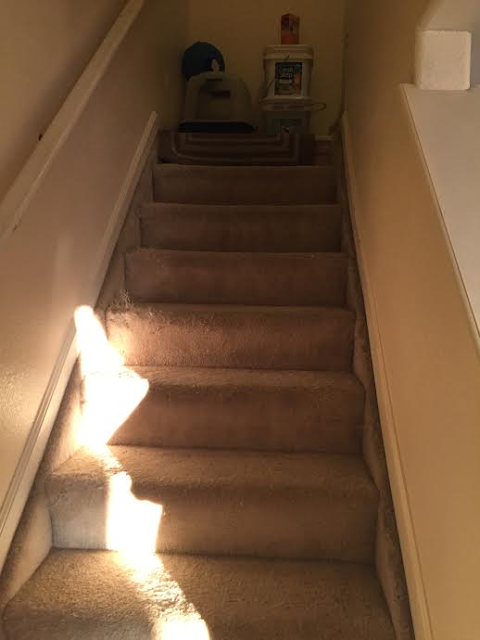 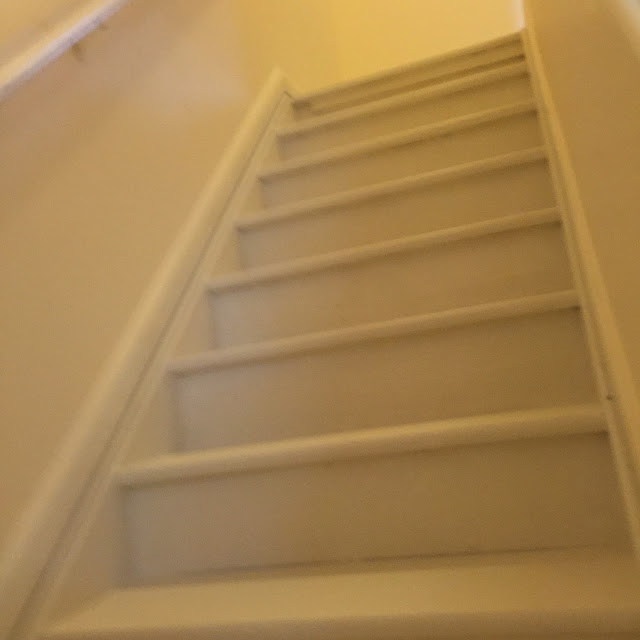 All of the old, disgusting carpeting is out of the house now. J pulled it and the tack strips/staples out this morning while I was driving all over town. When I got home, we painted the stairs, the risers and the wood on the sides with a patio/flooring paint. It did pretty good on the cheap ass MDF board they made the stairs out of. We still need to install the laminate flooring in the hall upstairs and on two landings, plus pull the carpet from the three stairs between the dining room and the living room so we can paint those as well. We will do this tomorrow, if the weather stays crappy. It really needs to be done. We need to install quarter round between the side of the stairs and the trim, which we will do prior to painting the trim. We should have the stair treads before the end of the week, so we can match the paint color for the trim to the carpet color. After we paint, we will install the stair treads and then this project will be finished. Finally. 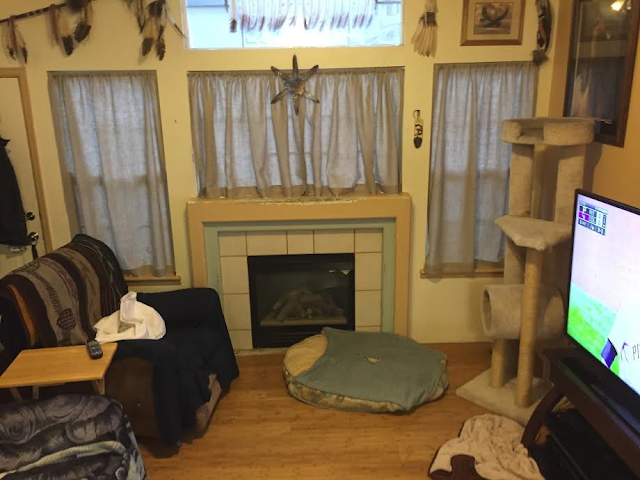 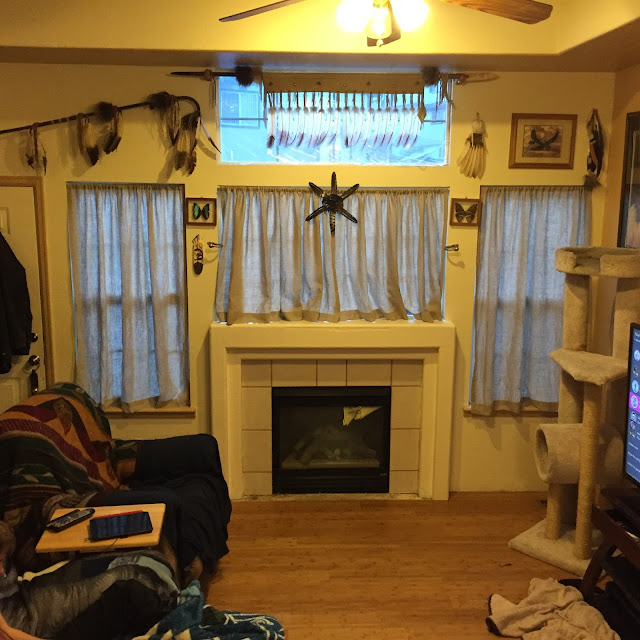 We used some of the left over paint from the hall/dining room to repaint the mantle. The two colors and the damage done by the dog was making me cray cray. I did not want to spend a lot of money since we want to replace the mantle with a wooden one. When we lay the upstairs floor, we will also pull out a piece of bamboo and finish the floor in front of the fireplace.

So, Ashke's leg is a blessing in disguise, because I know that I would not have wanted to work on the house instead of ride, even though the work we have done has made a huge difference in how I feel about being in the house. I didn't realize how oppressive living in a tore up house was making me feel. J also managed to fix the gas fireplace, which is on as we speak, and clean the glass. It looks awesome.

Next on our list is the upstairs bathroom, which is going to require professional help, and then the basement. The bathroom needs the tub pulled, the wall taken down and the plumbing behind the wall fixed (we think there has been a leak since the tub was originally installed), the sub floor replaced, and then everything put back in, the wall tiled and new lanoleum installed. Yeah, doesn't that sound like a freaking nightmare?

The basement is going to be at least a year from now. We need to put the pool table in storage, then rip up the carpeting, the second floor we installed, the insulation layer we put it, and the sub floor. Then the new subfloor needs to be installed (concrete backer board), and a radiant heat floor put in, then the laminate flooring installed over the top. A fresh coat of paint, a bar put in at one end of the room, and then the pool table will come back inside. The basement room has always been twenty degrees colder than the rest of the house. We installed a layer of insulation between the sub floor and the second floor we put in (there were four inch holes between the edge of the subfloor and the wall in some places, plus filled all of the holes with foam insulation. Then a few years later we installed bale insulation between the joists under that floor. I have no idea if they are still there, because that was before the construction work was done on the caissons. But either way, that room is still cold. It will be nice to finally be comfortable down there. A radiant heat floor should be perfect.

Finally, we need to replace the laminate in the living room with some other laminate that isn't as soft as the bamboo we chose. It has been destroyed by the dogs. I think both J and know what kind of flooring we want, but it is last on the list. The joys of home ownership are still better than renting.
Posted by Cricket at 10:04 PM