Ashke has been really unhappy the past two weeks. I think as his leg is feeling better, he is getting scared that his job is gone. Seriously. I think he misses our rides, our training, our time with me in the saddle. I've been out more frequently than I had been since he moved to Morelli, so it's not that he feels abandoned. I think he misses our adventures.

Today, we loaded him on the trailer and headed for Barr Lake. The footing there is great, the trail is very flat, and I knew in advance that if it was too much, we could just walk the entire ride. It would get Ashke out with Eddy, and give me a chance to evaluate his overall condition, and the leg. If the leg was really bothering him, we could just turn around and go back to the trailer. I rewrapped his leg, which looked better than yesterday, and then wrapped his hind legs with the BOT tendon boots to give him a bit more support.

Ashke jumped on the trailer after seriously regarding the two horses grazing in the pasture next to the trailer. We traveled to where Eddy is boarded, loaded all of the things, grinned in pleasure as Eddy loaded himself, then headed to Barr Lake.  Saddling went smoothly, although it was a tiny bit of a struggle to get the girth hooked up. The boy has gained a touch of weight.

He was on fire. I didn't push him at all. I was riding him in the hackamore so that if he wanted or needed a break we could stop and he could graze. I let him choose the pace, just slowing him if he felt a bit ragged. He was ready to go and intermixed walk sets with long trotting sets. He even offered a canter when the footing was excellent. He was magnificent.

For the most part, he felt completely sound. We started out at the trot (his choice) and he felt just a touch off, but he got stronger and more solid as we went along and he tested the limits of his pain. 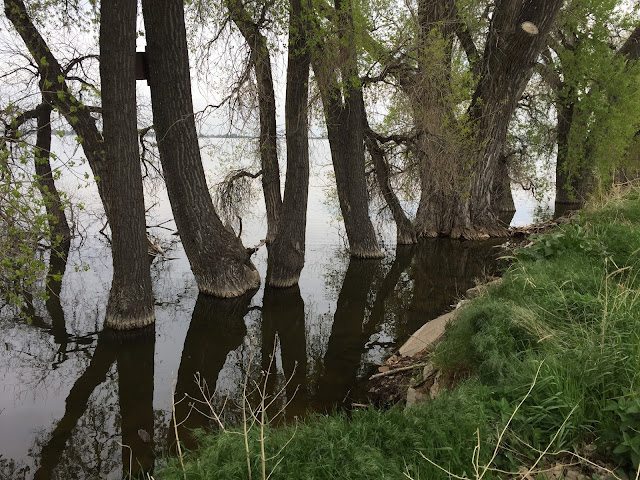 It really is a beautiful lake. 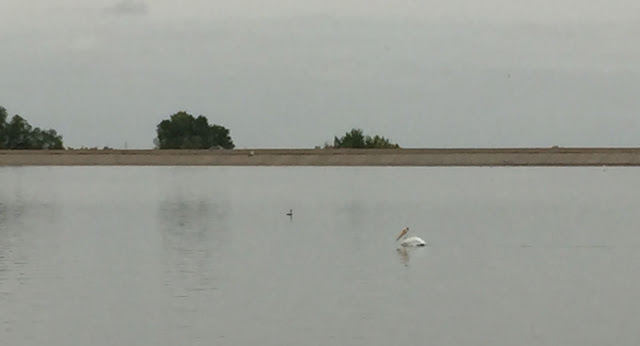 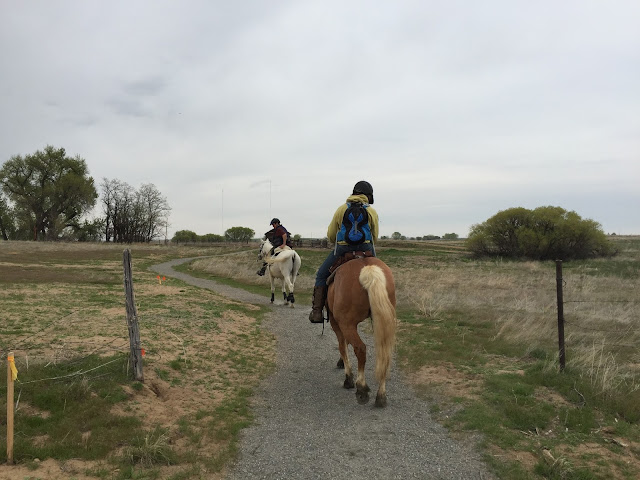 This was a great gravel path that led from the main trail, through a prairie dog farm past a bunch of hunting blinds. We cantered a bunch of this.

While we were cantering, Eddy pulled a stunt that he's added to his bag of tricks in the past two months and bolted. Or tried to. K fought with him and he veered into the prairie dog town at a gallop, tripping and stumbling through the holes. K finally got him stopped and she was pissed (for which I can't blame her). I meandered around with Ashke, distracting him with trees and tall stands of grass, while K ran Eddy into submission. They did long canters, extended trots, sudden halts, circles, etc. He worked. Hard. 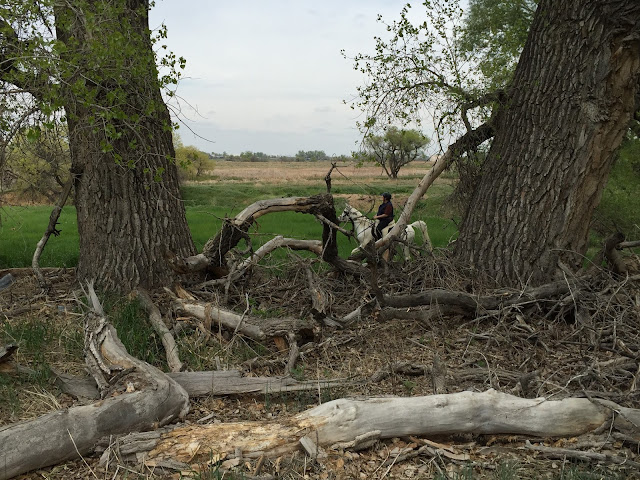 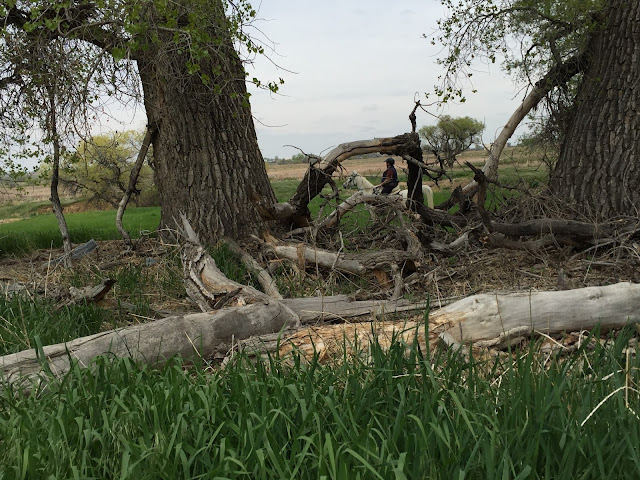 The amount of moisture we've had has not been good for the ancient cottonwoods. 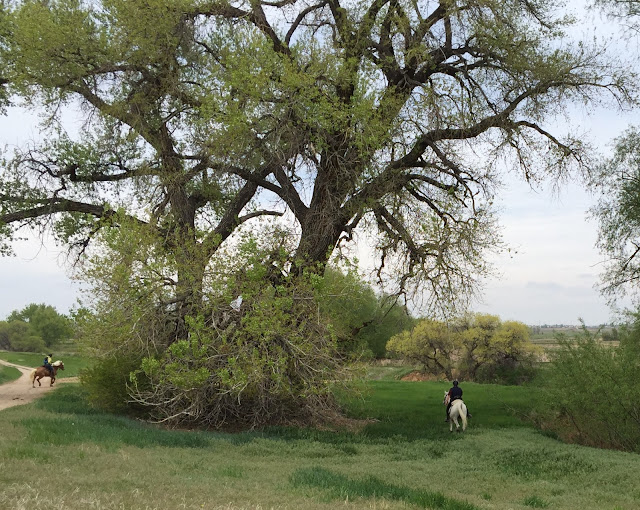 And a lot of knee high grass. 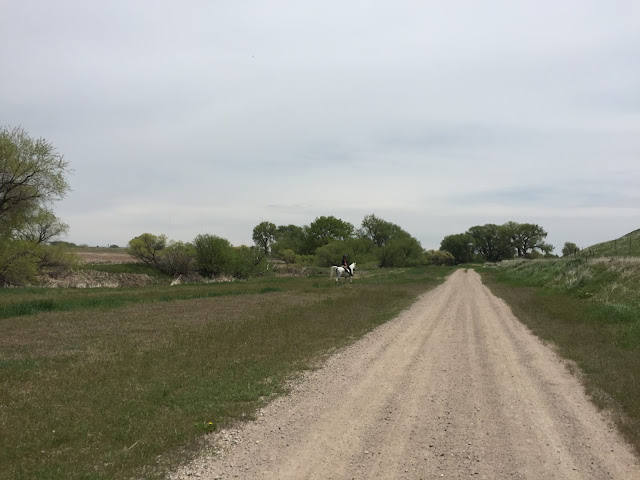 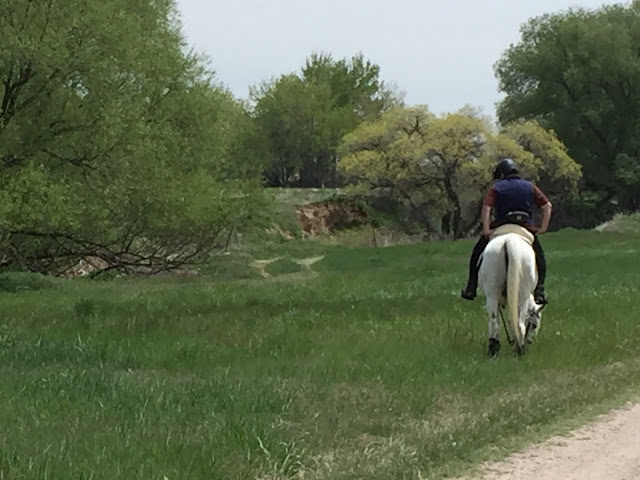 Ashke had died and gone to grass heaven. 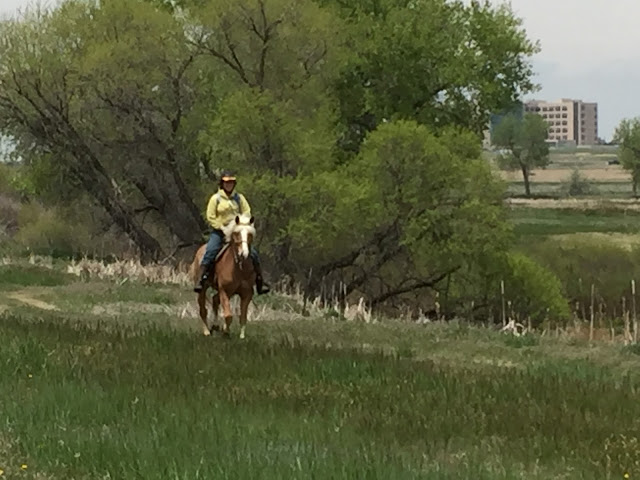 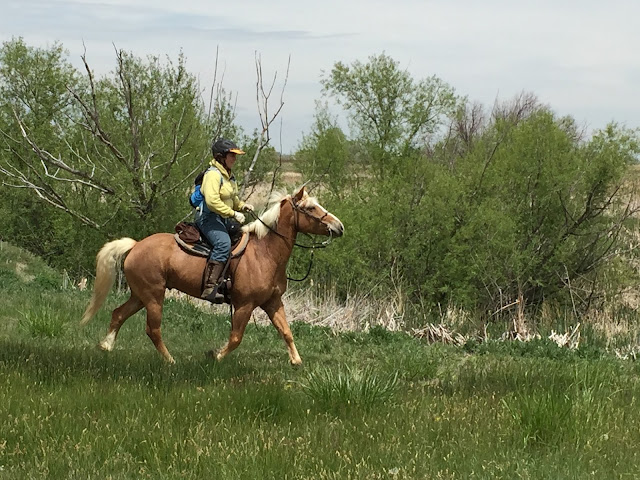 Can't really tell from this picture, but he was a sweaty mess.
Listening though. 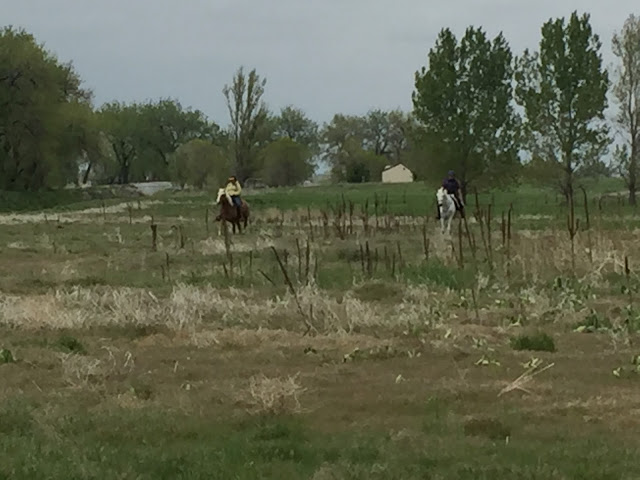 There are two bridges that cross the canal that circles Barr Lake. On the way back we crossed over the one we'd never been across before. That allowed us to ride through new to us territory on the way back to the trailer. 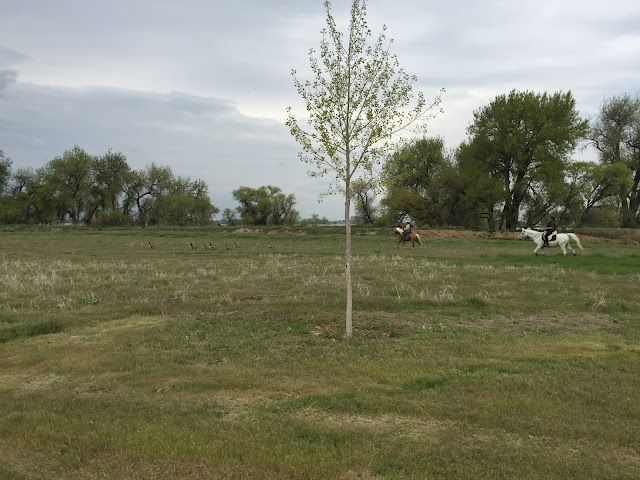 Coming back into the trailer area, we were herding a bunch of geese, that didn't want to fly.

Ashke's leg looked really good, or at least the wrap looked good, with no additional swelling (the wound site is still slightly swollen) and Ashke seemed pretty happy to have finished another ride. We did just about 7 miles in an hour and 45 minutes (4.12 mph ave) which used to feel difficult, but just felt kind of ordinary today. Ashke was slightly sweating under his saddle but otherwise looked and felt great. We let them cool out at the trailer while we ate lunch, then loaded up and headed home.

Overall, Ashke did awesome. Neither K or J could see any hesitation in his stride. I am planning on rewrapping the leg again tomorrow and will evaluate the wound then. The wrapping only lasts about a day or two at the most. I couldn't figure out what was going on until I saw Ashke itching the back of his leg with the hoof of his other back foot.