Today I was able to attend a WE play day with High Country Working Equitation. I met A, the trainer and organizer for High Country WE,  at the clinic and schooling show I attended last June. She had a schooling show the first of August I was going to do, as prep for the RMIHC show the first weekend in in September, all of which was derailed by the VSV outbreak. This was the first play day that A had hosted since the quarantine was lifted that I could attend. It was about 45 minutes from the barn. Originally, I had planned on picking up LM from her farm and hauling her and Satori to the play day, but luckily for both of us, she got a ride from one of her friends. K was interested in scoping out WE, so even though she couldn't ride, she planned to meet us at the barn to ride up to the event with us.

J and I got up early, packed the lunch I had made into the cooler, secured the house and headed to the barn in record time (read: fifteen minutes earlier than I had planned). When we got to the barn the first thing we did was load up the pvc poles I bought two years ago that have been in the field next to the outdoor arena and loaded them in the truck. I think all of my misc items that have been laying about have been gathered up. Then we hooked up the trailer and got it loaded. I pulled my BOT blanket out and got it on Ashke (thanks Marie for showing me how to hook up the belly straps). We were ready to load 20 minutes earlier than I was expecting. Ashke and I wandered around looking at stuff and waiting for K to get there. She pulled in as J was beginning to fidgit, loaded her stuff in the truck and I walked Ashke onto the trailer. This horse is such a joy to load.

Almost an hour later we arrived at the Circle Star Arena, where we parked the trailer in their field and then set about getting ready to ride. I gave Ashke a mash to eat (which he dribbled everywhere) while getting him tacked up. He was snorty and excited, but not out of control. He did not like it when I left to go to the bathroom before we went into the arena, however. I hand walked him to the arena and led him around the obstacles, examining and exploring the layout. He knew right away what we would be doing as soon as he saw the stuff. After walking the course, I swung on and headed around the arena at a walk. 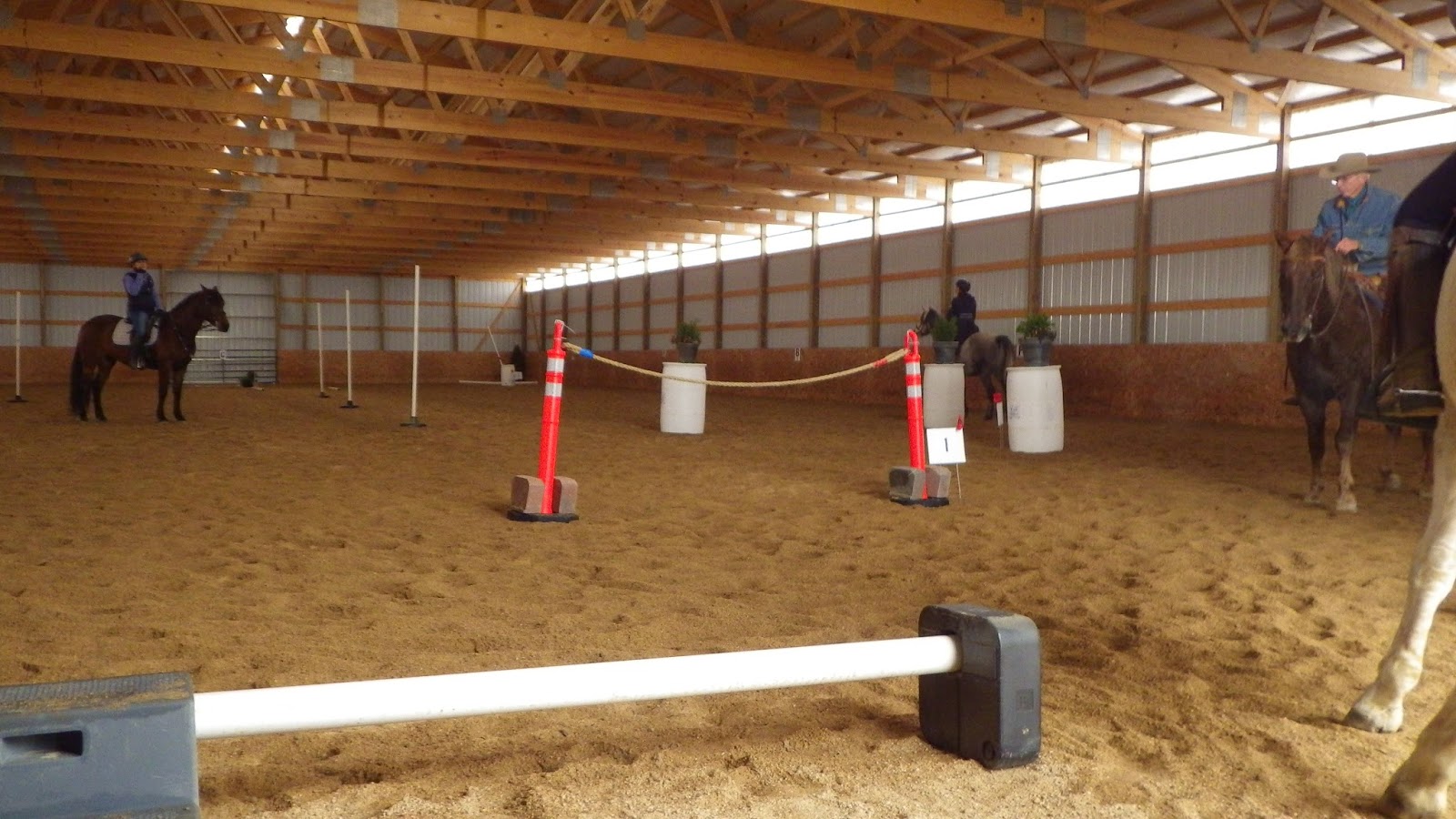 The right side of the arena. Gate obstacle, three barrels, one half of the slalom course, and the garroucha pole in the back corner. You can't see the barrel in the corner with a bell and burlap on it. 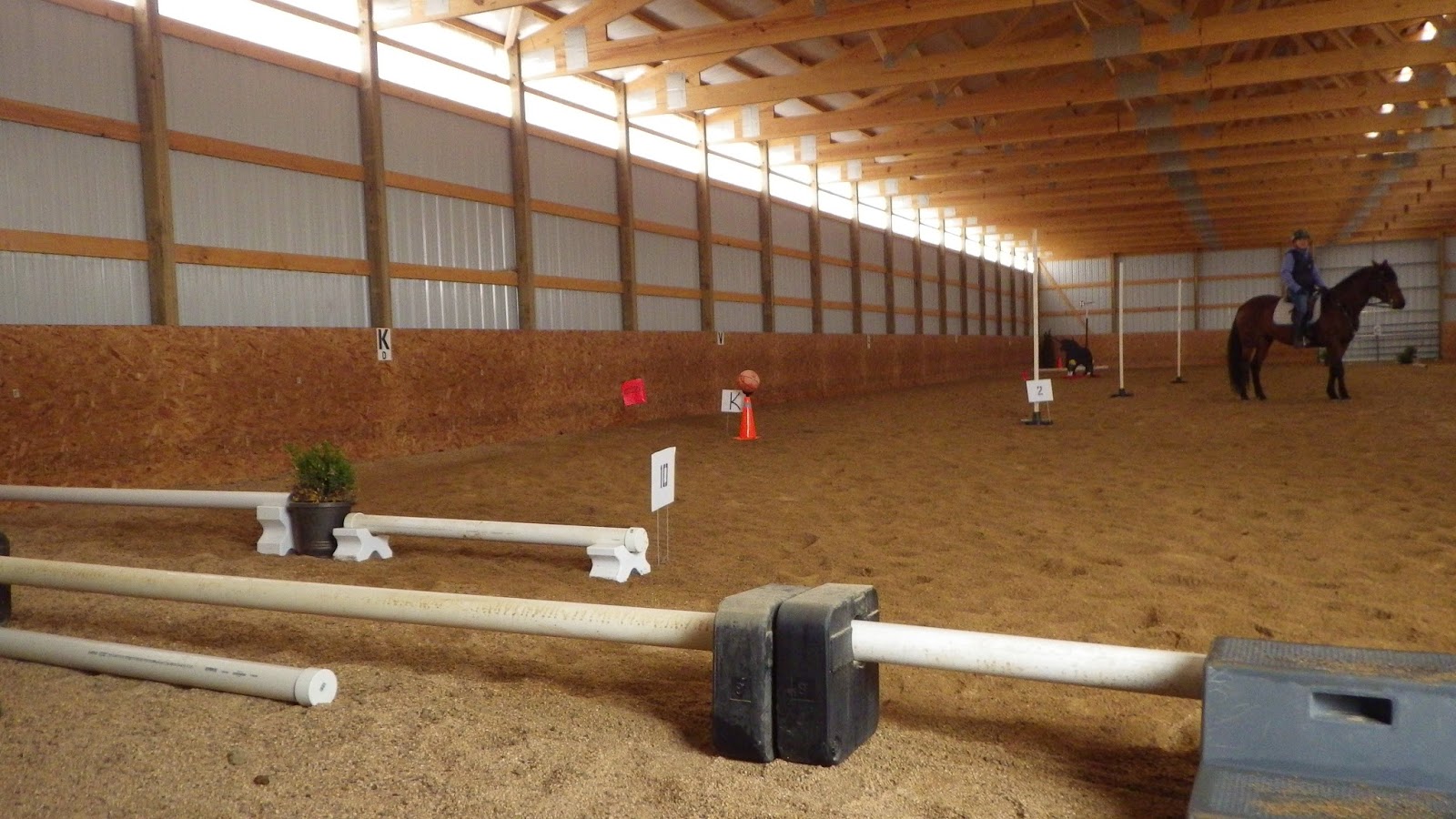 This was the left side, with the other half of the slalom course, a ball to hit with the garroucha pole, a reinback obstacle at  the very edge of the arena against the left wall and in the back a cut out of a black bull with a quintain on the top (for hitting with the pole).

Ashke was stiff and confused when we first started working with the gate. He still freaks out about the rope swinging next to his right hind leg (the one injured when he was thrown). His MO is to get anxious when approaching the gate (he should approach, stop and remain motionless while I release the gate) and refuse to stand. Once we get that accomplished, he backs well but when we swing around to go through the gate, he gets anxious again about swinging his hip around, which causes him to overcompensate. He was doing it, but it wasn't pretty. The guy coaching the obstacle (one of the trainers - he shows Level 3) suggested I keep the rope close to my leg so it wasn't so obvious to the horse. That suggestion seemed to help a lot. I kept my hand next to my knee instead of swinging the rope around. That technique combined with Ashke figuring out the obstacle (once he knows what's expected, he needs very little help) resulted in some very good gate work.

This was our final practice and you can see that Ashke has figured out what I want him to do, which takes very little work on my part. He is so smart, I can't even begin to tell you.

After the gate work, we worked on the slalom poles. I spent a lot of time yesterday riding with my left hand. This is frustrating for both Ashke and myself, since my left hand is stupid. We are still figuring out how to achieve proper bend while neck reining. Ashke has a tendency to counter bend. He also throws his head up. It is his default move when he is confused. Because I had practiced the gate first, the group that was working on the slalom had moved on, so I didn't get any feedback or suggestions until our precision ride at the end of the day.

We worked on sidepassing the poles in both directions and in getting comfortable with the garroucha pole and barrel, which was set in a corner. The bull quintain (which J has promised to make me) was scary at first and then no big deal. The quintain is pretty cool, since you can set it with either the spinning target or a ring. Then we moved outside to work with the garroucha pole and the quintain that was outside.

Just a couple of short clips. Totally my fault, since I did not double check to make sure the camera was fully charged before we left the house. J was trying to conserve as much juice and still get clips as she could. The funniest part of this, to me, is him spooking at the damn bridge every time we went past it. He bounced me pretty good the first time. I told J that I need to get a 10'6" pole that I can practice with so he's not so head high when we are handling it.

We did a little more practice on a L shaped sidepass. I need to work him more on stuff like this since he obviously had no idea what to do when we got to the corner. Cueing him to swing his hips just made matters worse, since it was obvious to him that he needed to continue to move his whole body sideways. Practicing this will help us be better at all of our lateral work. My favorite part is watching him get kisses from K.

After working the obstacles that we wanted, the plan was to take turns riding the precision test in order and get feedback from the trainers. I suggested we break for lunch first, since my stomach was growling with hunger. Everyone agreed and we went back to our trailers to give the ponehs a snack and stuff our faces with yummy goodness. LM, the woman who rides Satori (from Teller Trail) was worried about Satori. He just wasn't acting normal, and although he was eating, he wasn't interested in his carrots or mash. He had been a bit lethargic in the ring and LM was worried about him. She ended up taking him home where she discovered he was running a slight fever. He had no discharge from eyes or nose and he was eating his hay okay, so she is in the "wait and see" phase of horse ownership.

When we got ready to ride for the afternoon, the arena owners had closed off the outdoor arena to allow their cattle to come down and get water. Ashke was very curious. 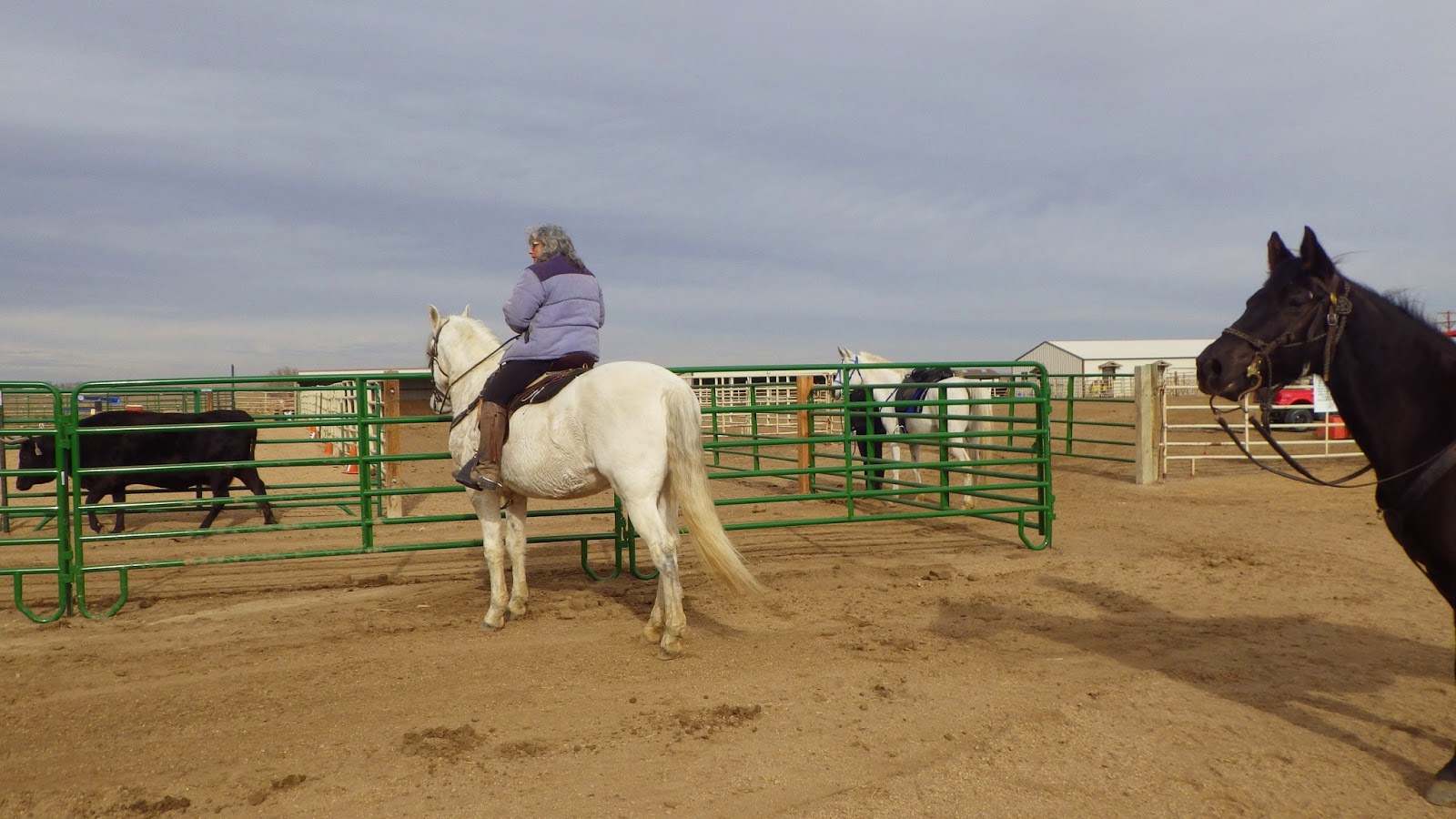 C, one of the trainers on her Lusitano, in the foreground.
All of these cattle had curvy horns. 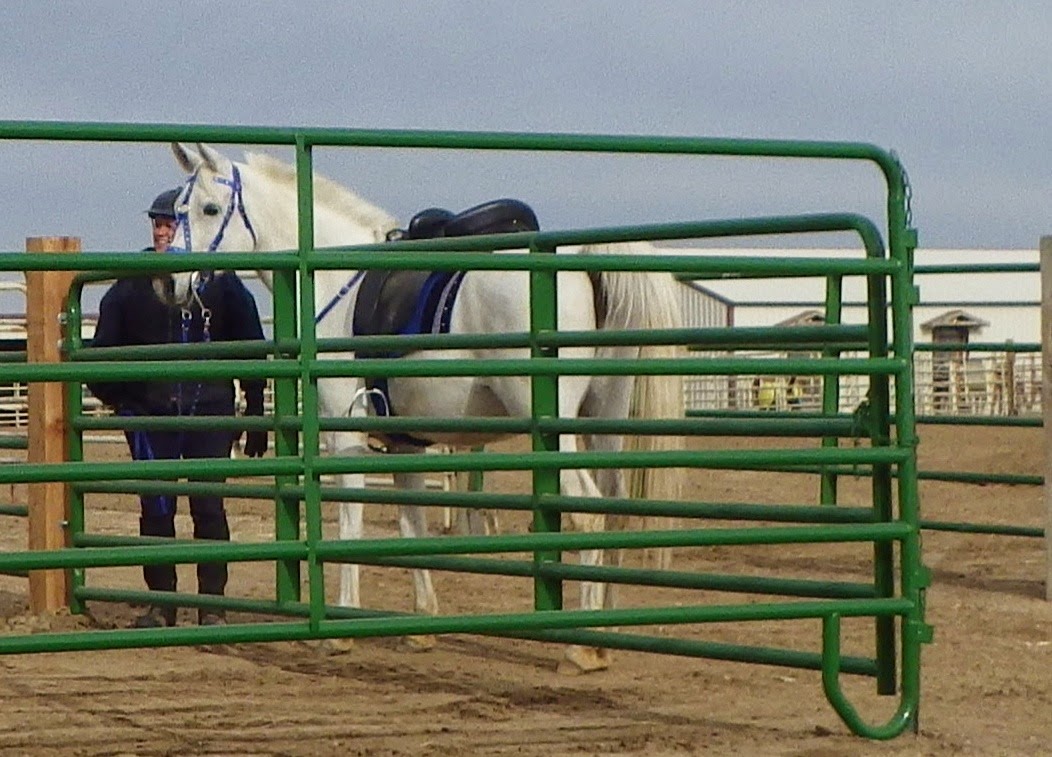 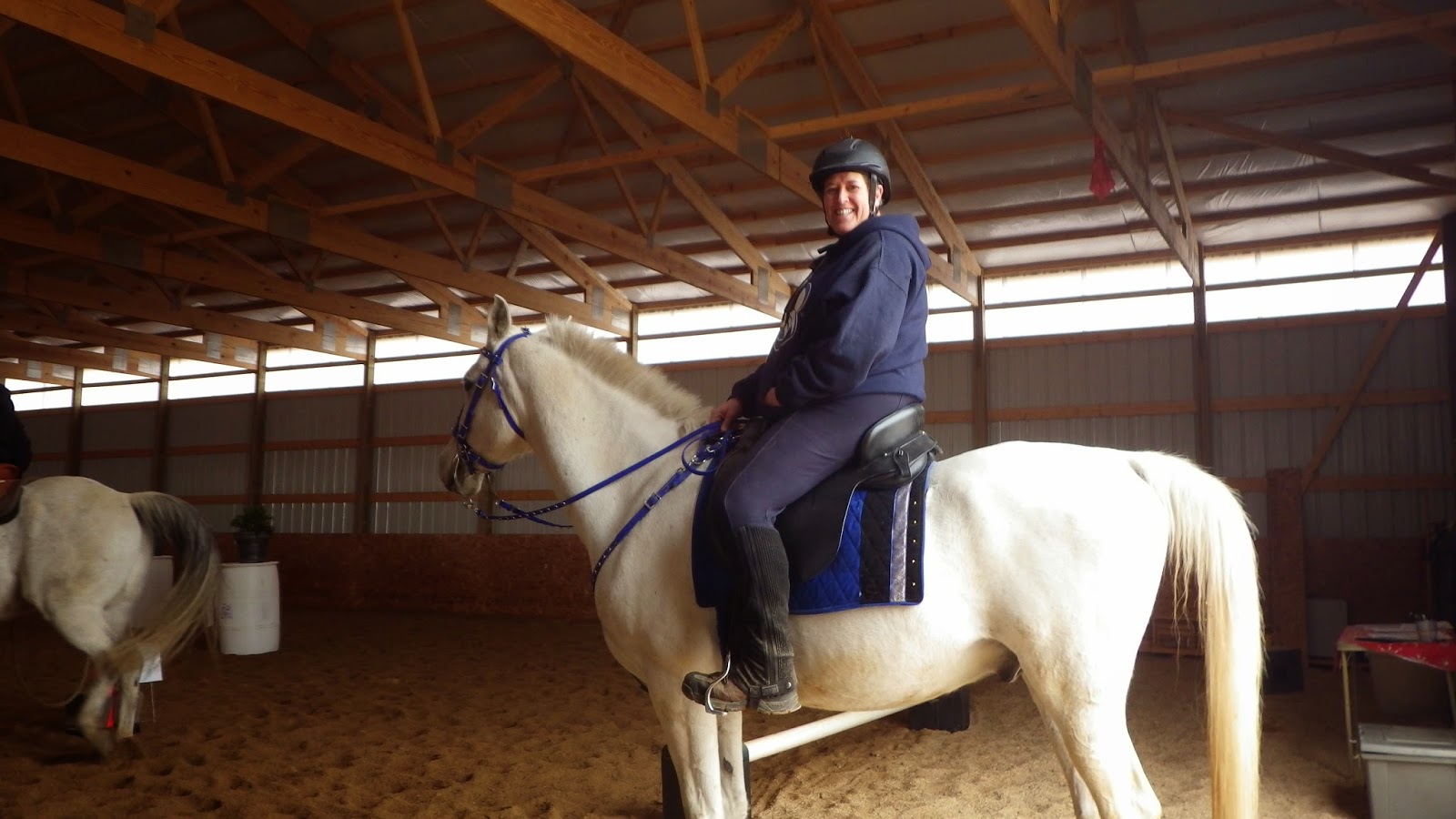 Waiting for the precision test to start. They moved around the sidepass pole to make it easier to do.
I think course design is an under appreciated skill, since it's not as easy as it looks.

I totally disqualified myself by almost doing the garroucha pole before the bridge. Who knew that keeping the obstacles in the correct order would be so darn difficult. At the end of the ride, C gave me some great feedback. She told me to ride with both hands, unless working an obstacle that requires a hand (gate, garroucha pole, carrying stuff) and get him into a better bend, especially around the poles and barrels. I had no idea that I could switch back and forth between one hand and two depending on the obstacles, but I can until we are at Level 5 (some day). That bit of advice was worth the whole day, because it means I can use both hands to help him balance and bend. Plus it will be easier to help him remember to give to the bit and keep his nose just in front of the vertical. We also have stuff to work on in the arena going forward: I will start with two poles and work on turning and bend. And it will also help to work on transitions with both hands.

After the precision test, the course was modified again and we did a speed test. This is where course design came into play the most. In precision, if you need to add a circle or take a little extra time, as long as you do the obstacles in the correct order, there is no penalty. Obviously, in the speed trial, you want to be able to go as fast as you can since it is a timed trial. To start with, you go out and set the garroucha pole so it is where you want when you ride by. I cantered Ashke out and set the pole, then turned back toward the start and he was bouncing on his toes. He knew and was so ready for the run.

We I missed dropping the garroucha pole into the bucket. Ashke had started to cut around the end of the arena (knowing where we were going) and I missed it. In a competition, there should have been room to swing him around the pole to the right, but that couldn't happen here and Ashke was pissed I made him stop to put the pole back. In retrospect I should have kept him cantering and just made a circle. Then when we got to the reinback, he tried to dodge and I could hear him screaming in my head, "there's a wall, there's a wall." And I was like, "I know. Do it anyway and stop. Now." He did.

I had a great day and Ashke enjoyed himself so much. Lots of thanks to A and her group for putting on the play day and thanks to the owners of the ranch for hosting us. Can't wait for the next one.

Last thing of note, Ashke moved around the property yesterday. We watched cows and practiced obstacles and investigated our surroundings. Most of the footing was fairly decent pea gravel and sand, but the driveways and outer areas were larger rock. He did not have any issues with any of the footing and did not show a single step of tenderness. That tells me the farrier I am using now is doing his job correctly and Ashke's feet are getting stronger and less sensitive.