Friday after our ride, we took K and Eddy back to TMR, unloaded the gear and the Haffie, then took Ashke to his new barn. That's right. 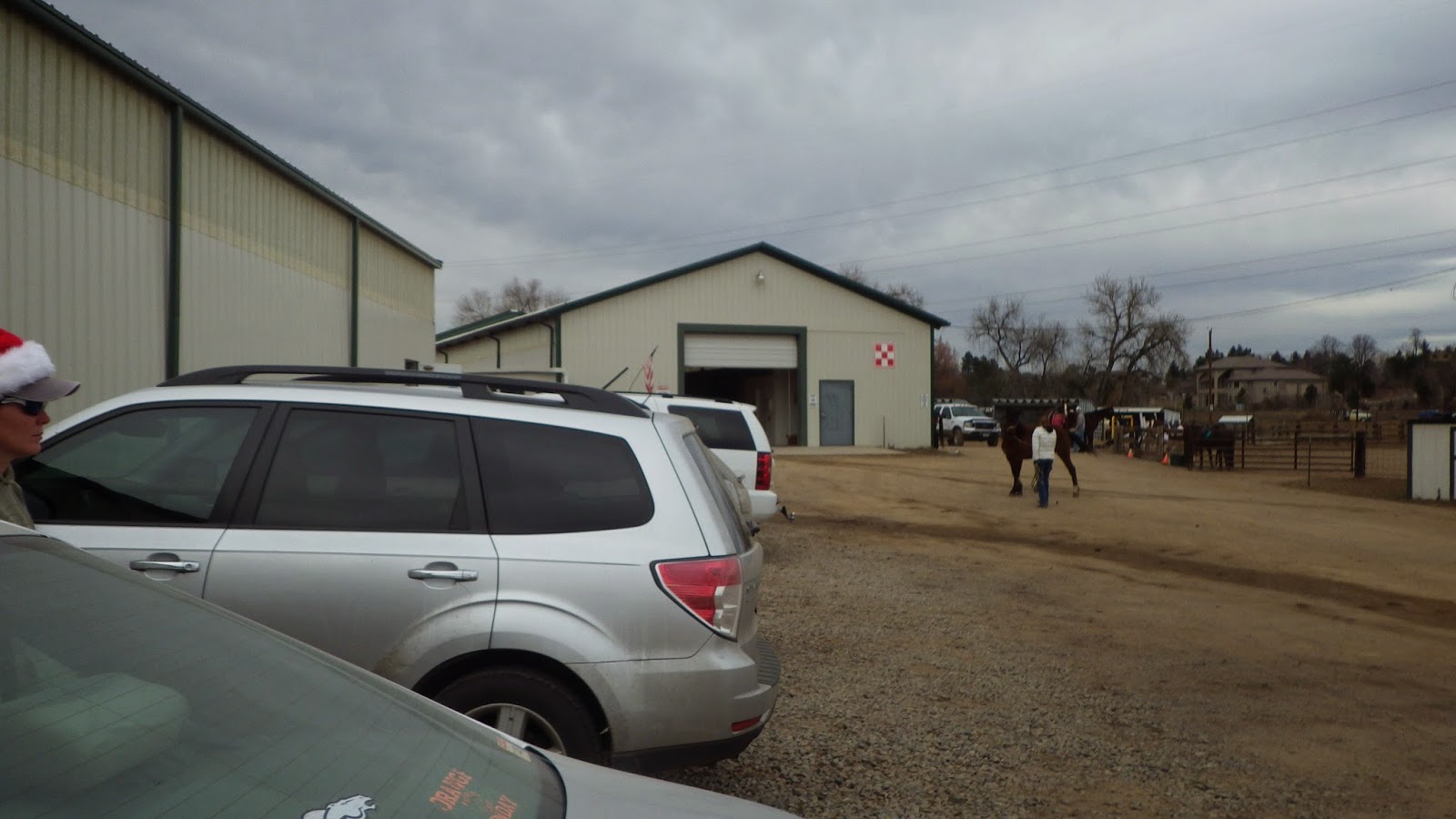 We had been at TMR for two years and Ashke had both a great run and a great view. He had horses he loved and got along with very well. It was not a quick or easy decision and one I had been pondering since last spring. The email announcing a raise in my boarding rates was the last straw. I was not going to pay any more to board there and there were several incidents in the past couple of months that made me more than happy to move.

So, out with the old and in with the new.

I lucked out in being able to move in so quickly. There was a spot coming open in a stall with a run and the timing couldn't have been better. I toured the property the same night I received notice of the board increase, liked both the property and the BO. J was in agreement with my assessment and we left our deposit the same day. 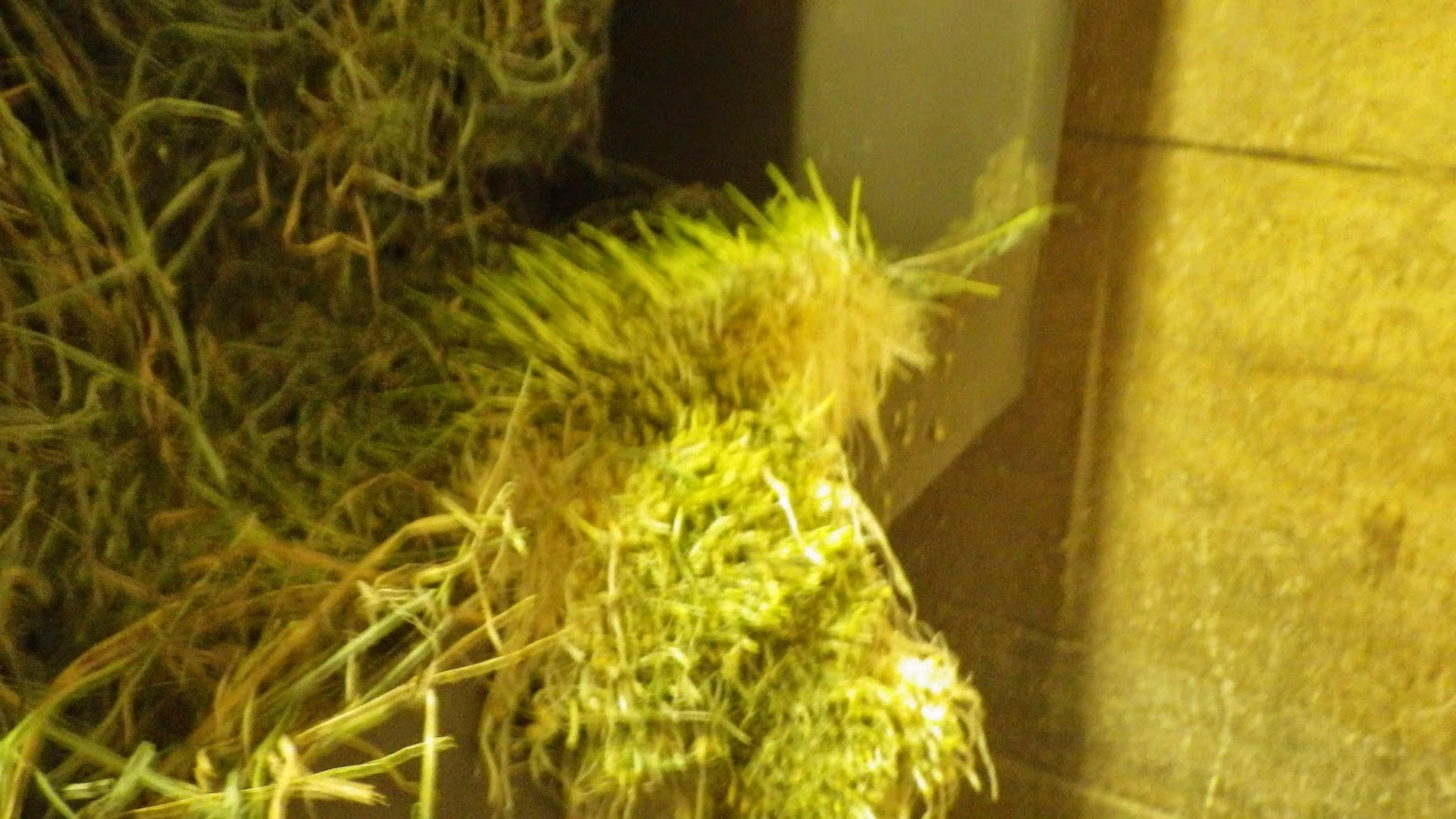 Barley fodder. It is basically a mat of sprouts and grass that Ashke already loves.
The grass hay is dark green and very thick. It smells good and there are no stalks or weeds.

SQA feeds six flakes of hay and six pounds of grain per horse per day, in two feedings and will add your supplements if you want. On top of that they also feed barley fodder. Barley fodder is a fresh grown barley grass sprouted from organic barley grain in a self-contained environment. Additionally, the hay is tested and if it doesn't meet their minimum standards it is replaced with hay that does meet those standards. I was a little worried about Ashke only being fed twice a day, but SQA has not had a case of colic since they started the fodder program and Ashke is not one to gobble his hay. We started with four flakes of grass hay and 18 lbs of barley fodder (one mat) a day.

The barn has it's own ball. They play soccer during the spring, summer and fall.
They also have Friday night fires with a potluck dinner for the boarders.

It has an indoor arena, and outdoor, two round pens and a park right across the street. Additionally, I believe J, Ashke and I can find a way to get to the canal at the base of North Table Mountain safely, which gives us access to all of the trails we could ride on from TMR. 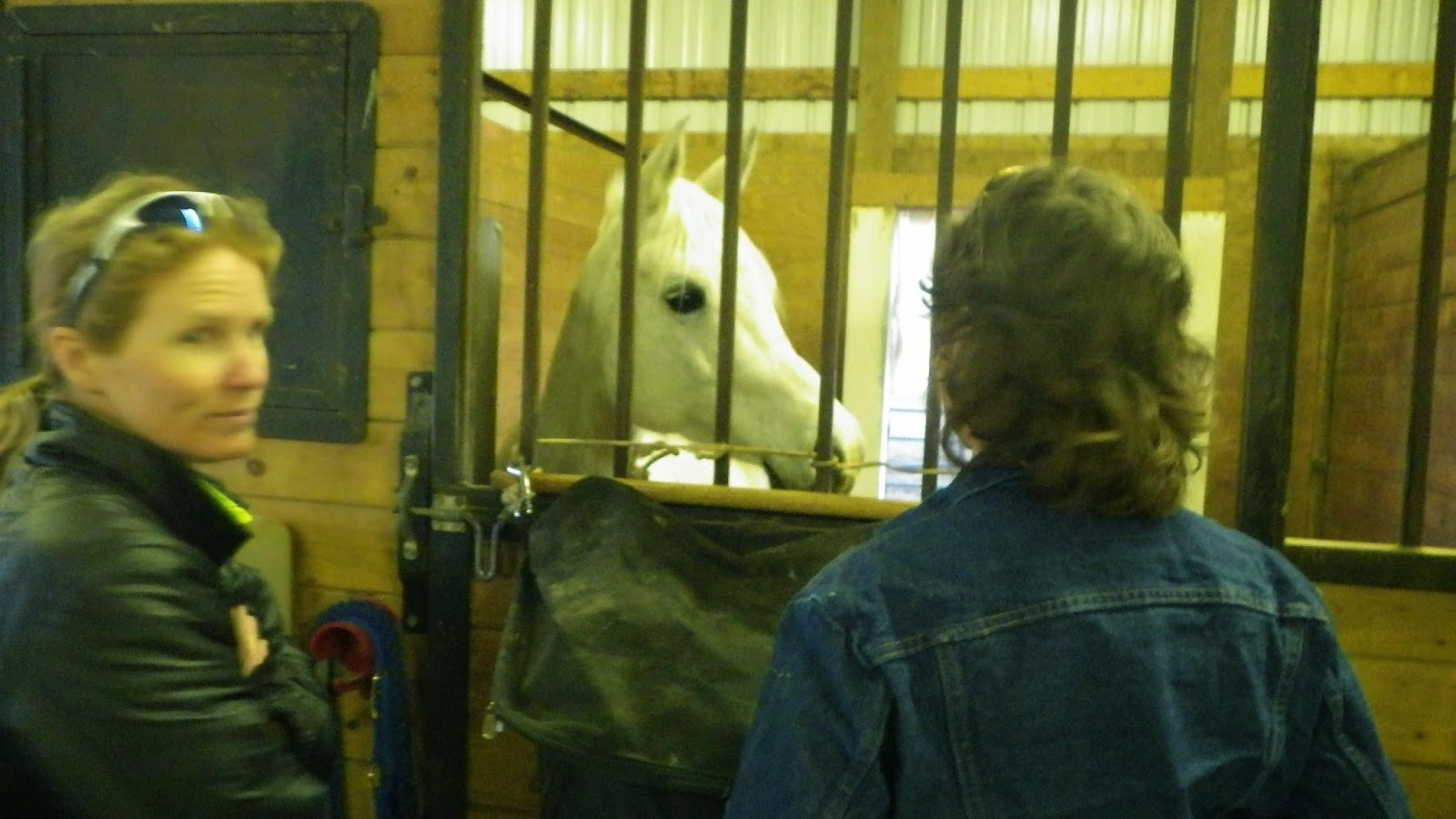 Ashke will be housed in a stall with a run, which is slightly smaller than his stall and run at TMR. However, he is not locked into the stall at any time. He will have access to his run 24/7 and the barn is not heated, which I think will be good for the boy. 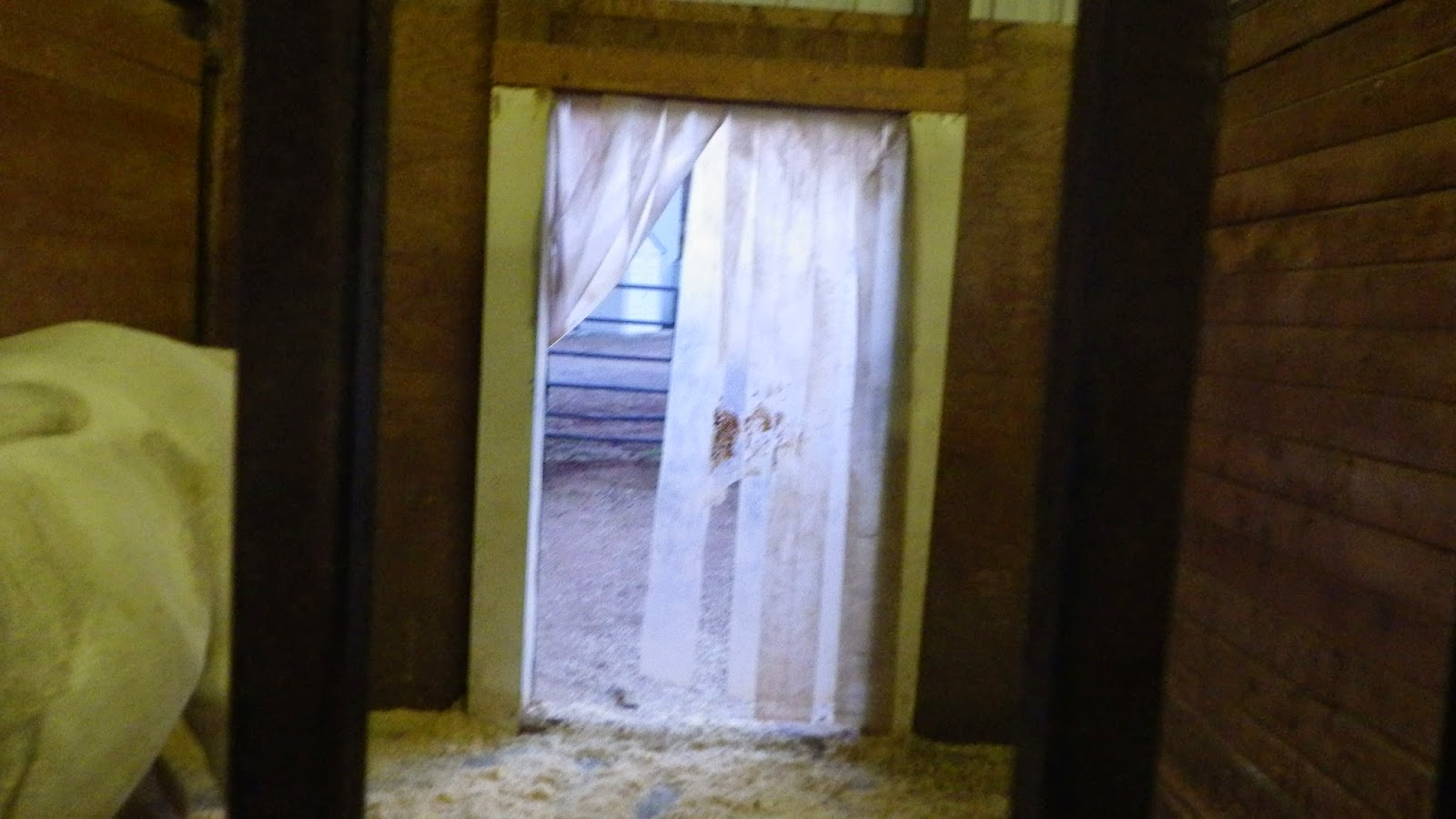 The stall and the run are separated by refrigerator strips, which I had asked about at TMR, but that idea was shot down pretty quick. The strips act as a weather barrier and cuts down on the cold air blowing into the barn. The horses can come and go as they wish by walking through the barrier. This is a task he must master. 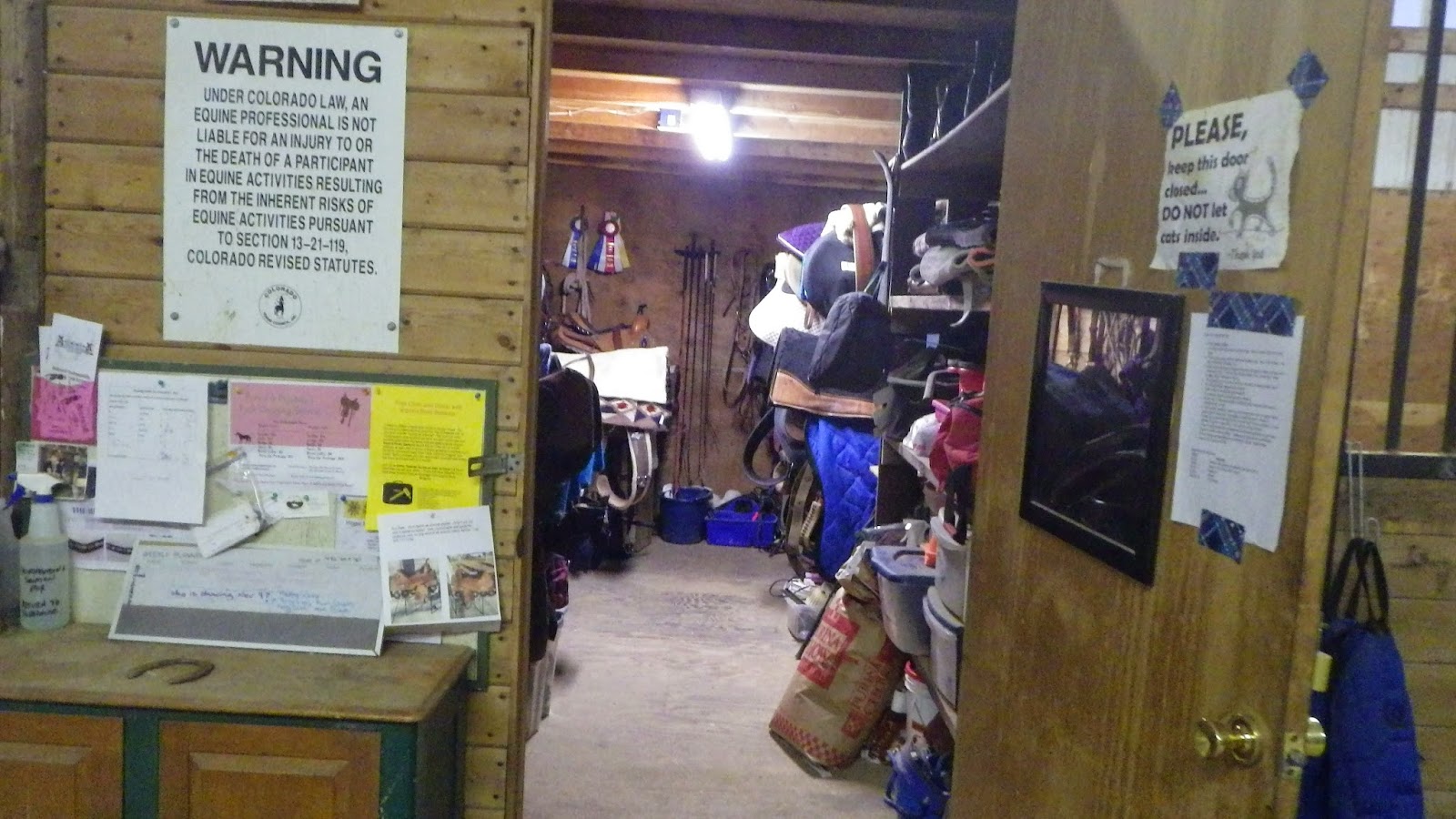 I sorted my stuff and kept a bunch in a box in my trailer. The saddle went in this tack room along with my bridle and helmet. 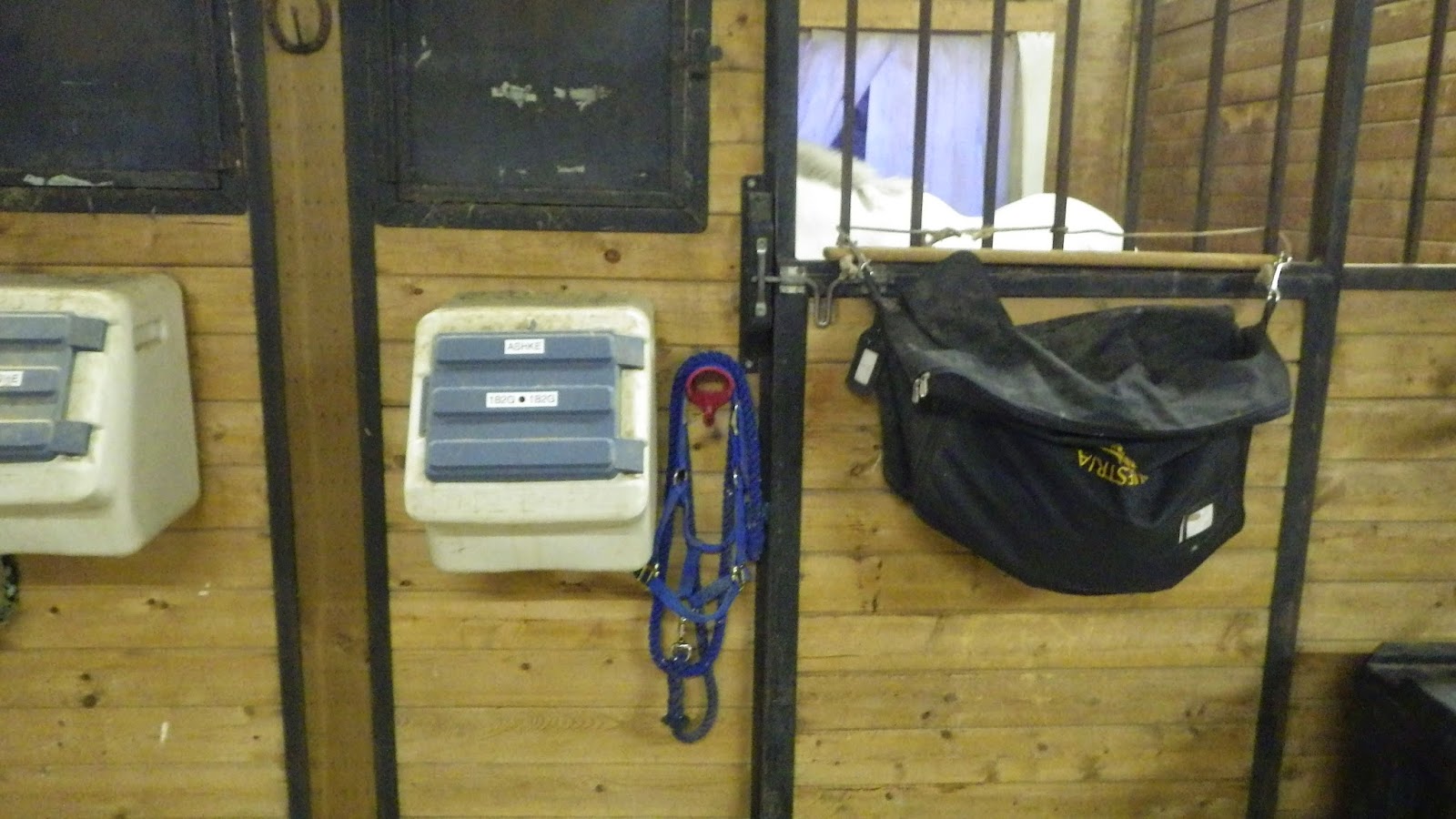 Front of Ashke's stall with blanket bag and halter.

I was really hoping to avoid having to blanket Ashke this winter, especially since I do not have a winter blanket, but it was not to be. He has been in a heated barn and the weather here changes awfully quick. 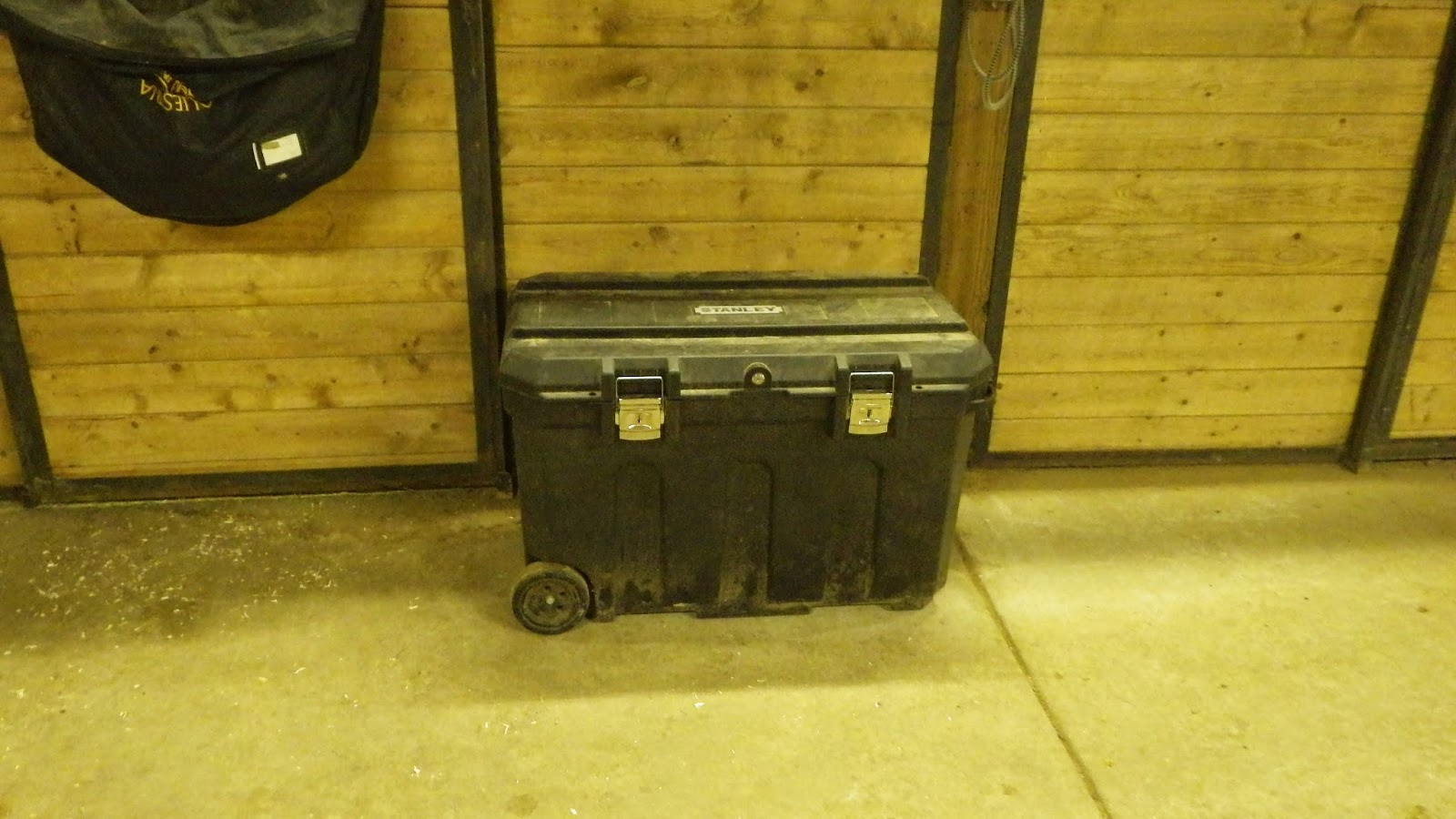 Tack box in front of the stall 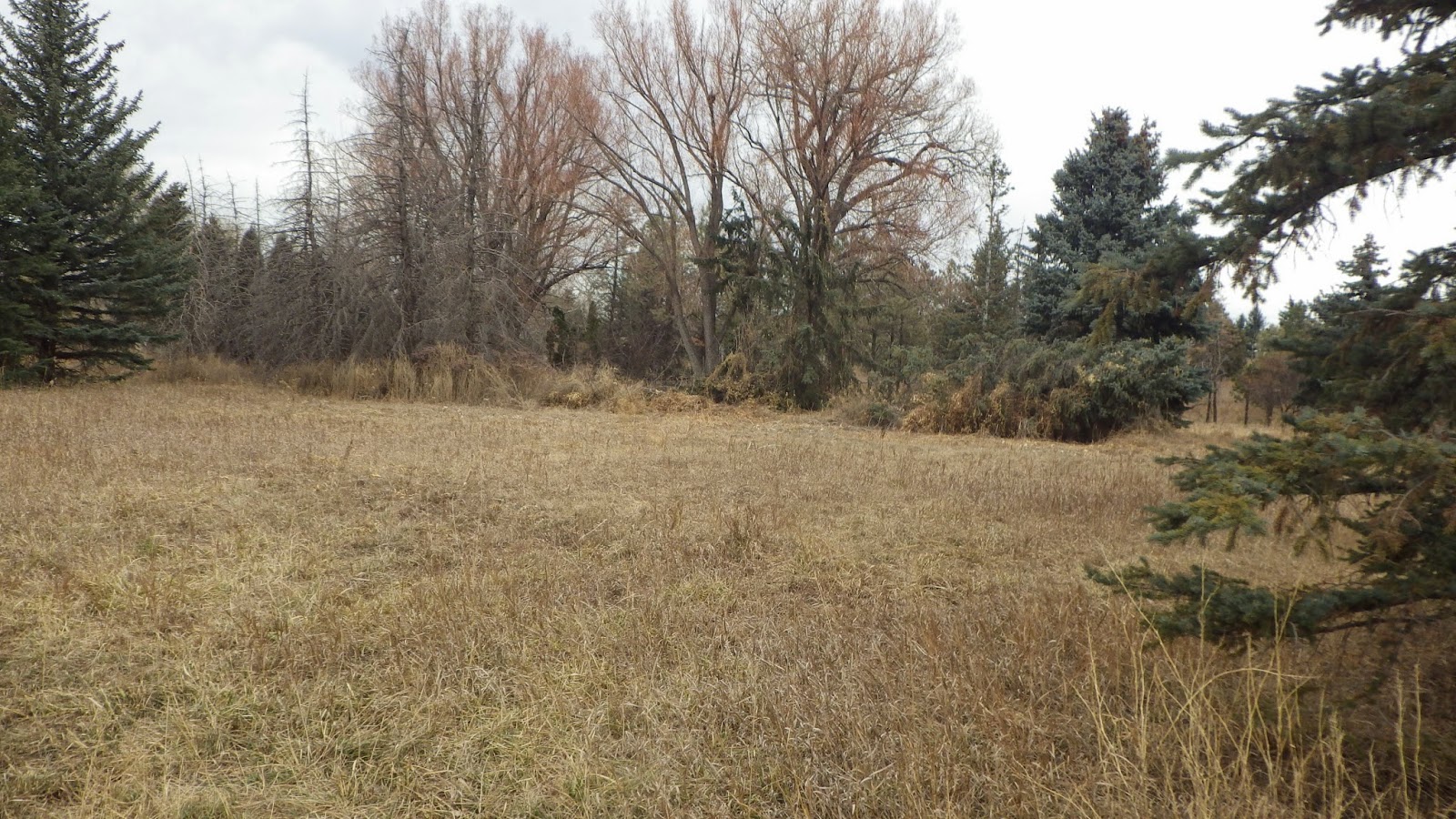 Open space on one side of the property, complete with a pair of Great Horned Owls. 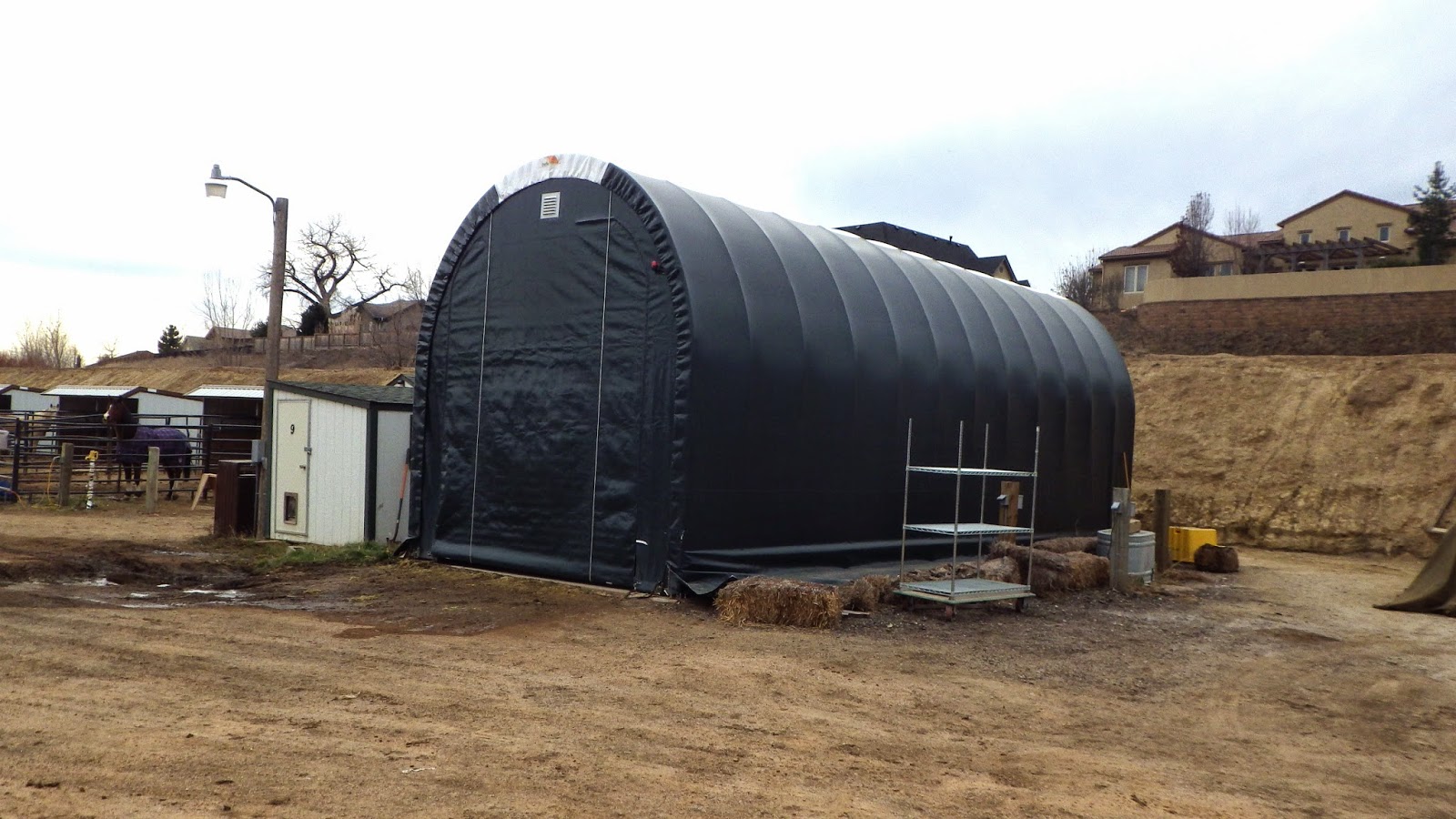 Barley is a cereal grain that is commonly used in the finishing rations of cattle in the United States and Canada. These sprouts are high in protein and fiber, and are naturally balanced in protein, fat and energy. Compared to corn, barley fodder has 95% of the energy and higher digestibility. Barley fodder is one of the most nutritious sprouts and is full of essential nutrients, vitamins and minerals. Feeding barley fodder will improve the overall health and wellbeing of your animals.

Inside that big black bubble is a self-contained unit that provides the perfect environment for sprouting and growing barley grass. The fodder system has a rack inside a self-contained environment that provides the perfect conditions for sprouting organic barley grain into sprouts. The grain is laid out on black, plastic baker's tray (basically) and slid in one end of the system. It spends six days (six rows of trays) moving through the racks and emerges as barley grass and sprouted roots grown together into a mat. Each mat weighs 18 lbs and the grass is almost six inches tall. Each horse gets half a mat in the morning and half a mat at night. This feed program is something I am really excited about since it should help Ashke's coat and hooves. A lot. And the overall improvement in the quality of hay/fodder should help with his energy level.

Once Ashke was settled and eating, we left him. I felt pretty stressed but figured I would know if anything bad happened. Saturday, J and I went to the barn on the way to the company holiday party. Ashke was outside with part of his flaps pulled open. I pulled him out and we wandered around the property, checking out our surroundings and meeting the other horses. We ended up in the indoor arena, which while square, is the same size as the arena at TMR. It also is very brightly lit when all the lights are on. There Ashke did this:


He was a bit spooky in the indoor. There are scary signs and a bunch of newness.
Got to like how he runs to me when scared though.

This horse has missed playing with his ball. I want to get our ball blown up so we can play with two.

He was feeling pretty good about himself.

We headed out to the holiday party feeling pretty good about his situation. He had cleaned up most of his hay and finished both the fodder and his mash by the time we left. (I wasn't stressed about him starving to death - I was stressed about him being off his feed or getting cold when the weather turned.)

Sunday morning we woke up to wet snow and wet pavement. It was hovering right at freezing and I was immediately worried about him. I really thought I owned a horse smart enough to come in out of the rain, but wasn't sure if he had figured out how to negotiate the hanging flaps. J and I enjoyed our brunch with my coworkers at the hotel where we stayed the night, then jumped in the car for the two hour ride to the barn.

When we got there, horse boy was outside. He was soaking wet and shivering so hard he could barely stand up. We pulled him inside and towel dried him as much as possible, giving him his mash and a flake of alfalfa from the lady across the aisle (she was so sweet). Once I got as much water off of him as I could, I covered him with my BOT fleece and headed for Murdocks. The BOT is not waterproof and will not work for this kind of application. So horse boy got an early holiday gift in the form of a new Saxon 1200 weight blanket. When we got back to the barn, he was outside again, making eyes at his newest love.

I swear I should have named him Romeo. 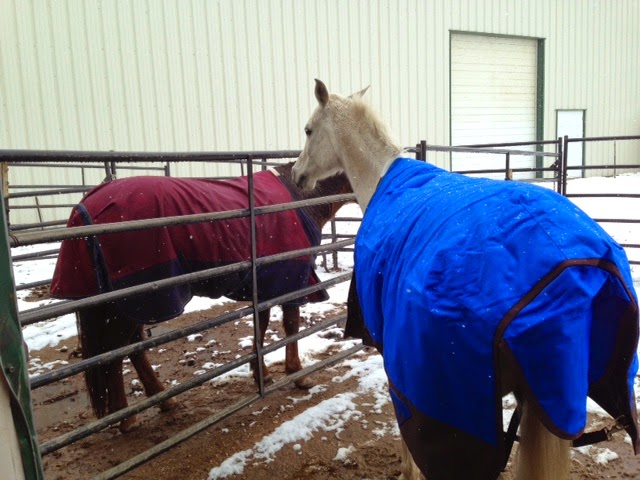 It did not take long to strip off the BOT blanket and replace with the Saxon. 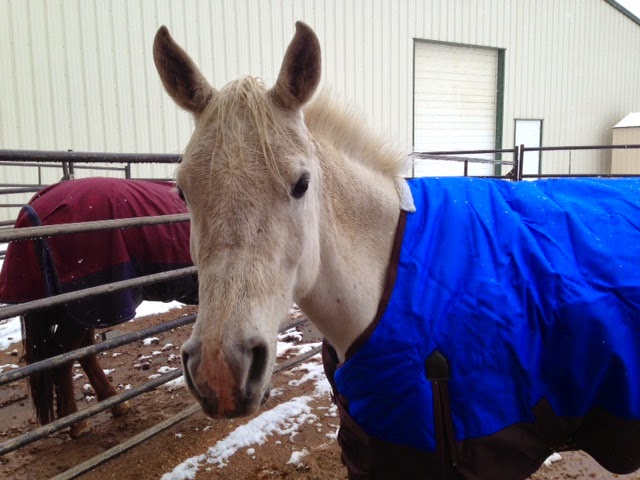 It was even in bright blue. 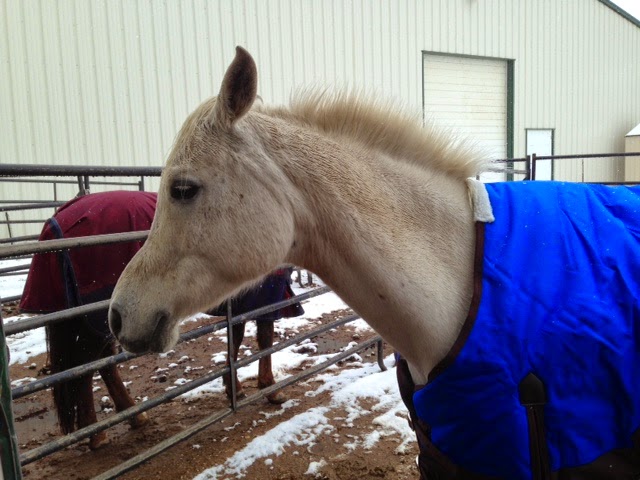 He wasn't shivering as badly when we got back and had finished both his mash and the additional flake of alfalfa. However, he was still standing in the rain and cold, snuggling the girl and shivering. 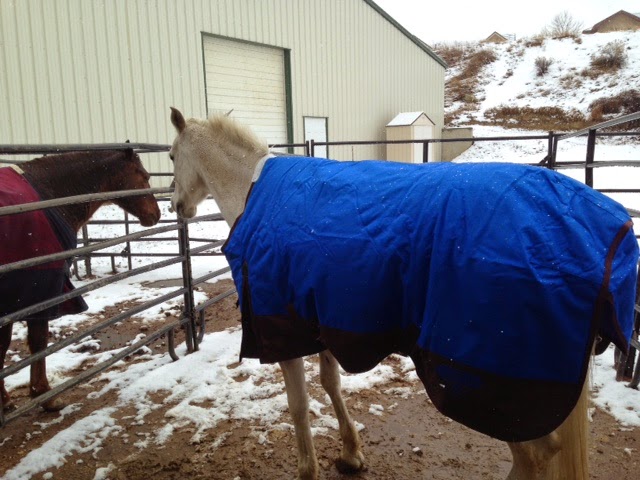 He became snuggly warm under his new blanket.
Outside and no longer able to be wet.

We added extra shavings to his stall. Blanketed him in a blanket that fit very well. And is blue. Called and added blanketing to our list of services provided by the barn, at least for this winter. We will see about next winter. I will go out there tonight to check on him.

Hopefully, neither he nor the mare will become so attached that we have to separate them. I'm glad he's made a friend though.

The other thing that was really awesome was the phone call I received from the BO, in regards to the message I left about Ashke. It was really refreshing to have a response to my concerns and an answer to putting him on the blanketing schedule and what that entailed from the BO, instead of empty silence, which is what I am used to.
Posted by Cricket at 9:22 AM