Christmas morning dawned early, not because T woke up excited and eager to open presents, but because the dogs knew it was morning. J and I, roused by wet nose pokes and ear snufflings (the two pups always sleep on the bed and have no problems letting us know when it is breakfast time) and short, sharp barks when we don't wake up fast enough. Walking and feeding commenced. Then J made cinnoman rolls for breakfast and then we waited. After eight, I sent the dogs up to wake the boy. (I think the earliest he's ever woken up was about 8 on Xmas morning, although he has no issue with waking up at 5 to check the offerings of Zur).

We opened gifts. T was happy with his iPad and new Heelys, J loved her down slippers and fleece lined, wind and waterproof shoe covers for her biking shoes. I received a new mid-weight, waterproof blanket for Ashke, (which was an absolute steal on Amazon and is remarkably solid construction for a brand I had never heard of before), a pair of winter riding tall boots by Ovation (I will do a review after riding in them a few times) and a mohair girth.

Then I guilt tripped my son into doing a ride with me. (I have no shame when it comes to prying him loose from his recliner and xbox). We went to the barn and I found Ashke standing outside, shivering slightly. Silly horse. He stopped once he was inside the box and out of what little wind there was. I don't think blanketing him is making him thicker skinned, although it is nice to have a horse that isn't covered in pee stains. I brought him in and groomed him in his stall (easier to do than standing him at the grooming stalls - my stall has crossties in it.) The mohair girth was too small and Ashke hated it. Hated it. I could feel him pushing his ribs out as I tried to tighten it. It came off and will be going back. I may just order a Toklat fleece girth (like the one I have now) in a size 46". I got his new easyboots on, still really struggling with the right front hoof, size 1W, and we set off. 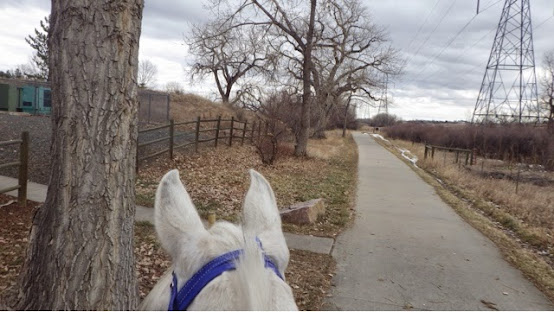 It was in the upper 30's, with a light wind and projected snow. I had told J the day before that I wanted to do a ride in the snow for my Xmas present. Ashke was a snorting, dancing, wound up ball of energy. Those hesitations I had about him not having enough energy and feeling lethargic, not so much any more. We spooked at pretty much every thing (the Arabian version of start, straddle, stop, stare.) 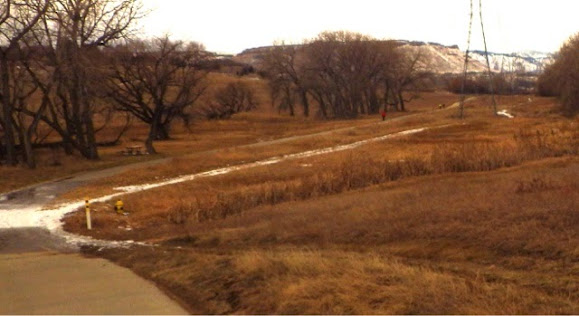 I have no idea why this picture is so dark, but the aperture did not change. Back by the electrical tower is J and T. T had been messing around on the ice out in front of the indoor arena where the cars park. (Northern exposure). As I ran inside to change my girth (no way I could get it snug since punk boy was blowing up his belly) he slipped on the ice and crashed down onto his back. I guess he got his gloves wet at the same time. Ten minutes onto the trail, J and T stopped to fix that issue (thank gods that J has started over packing) since she had an extra pair in her butt pack and hand warmers to boot. Warm and dry, he was a happier boy. We rode all the way to the soccer fields, where T got off his bike and raced around chasing the geese and making them fly away. Then he realized that he had goose poop all over the bottoms of his new shoes and spent time at the creek trying to clean them off. While he did that, Ashke and I tried to find some sane and controlled canter, since the first time I asked for a canter at the soccer fields, he spooked sideways, took off at a run, and then began leaping into the air and kicking out with his hind legs. I think there would have been bucking, except the bit I use absolutely prevents him from getting his head down. We rode up and down the edge of the soccer fields at a canter to get his willies out, which didn't really work. He gave me a great canter, but was still very up. And barely warm.

J took some video of us on our way home. Ashke was going sideways, which is why we fell out of the picture before we began to canter. He is definately stronger and getting better at holding his collected canter. He also goes sideways much faster than before. He was pulling and wanting to really run, but after the leaping and lunging we did on the way out, I wasn't interested in giving him his head. He had plenty of energy and trotted or did his running-walk all the way home. Standing still was not in his vocalublary. 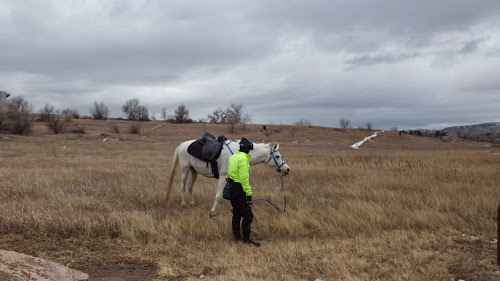 One of the great things about this trail is the public bathroom. It was even heated, although I am not a fan of stainless steel toilets. I am, however, a fan of being able to pee when it is cold. J held Ashke, who goobered her bright yellow jacket, while I was using the facilities.

J and T looked for a geocache while Ashke and I wandered in big looping circles around them. He would not stand still. The few times I asked, he pawed, then backed, then tucked his head down next to his chest and flipped his bit in his mouth. Standing patiently was not in his vocabulary. J and T found the location of the geocache but the cache was missing. While they were throwing sticks (T) and gathering up their bikes, I walked back and forth in a field, trying to help a couple of riders find an Easyboot they had lost. The man was riding an American Saddlebred who made Ashke's behavior look sane, since his horse was more interested in going sideways and up than forward. The guy could ride, which saved him a couple of times. I don't think they found the easyboot, though. I headed off down the trail, once J and T had fought their way clear of the undergrowth. 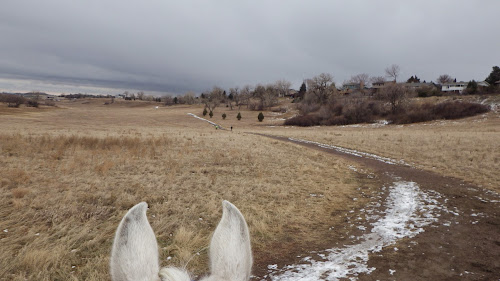 The little dot right above Ashke's right ear is T and J is just behind him.

T did really well on the ride until we found a small fishing pond covered with ice that he wanted to play on and J said no. He has the same self-preservation that I had as a kid, which is not good from the perspective of the parent. I'm amazed that my mom doesn't have more grey in her hair, but then again, I was a lot more sneaky as a teenager than my mom knew. What happens as a teenageer, doesn't need to be discussed as an adult. T was grumpy (lack of food played a part here) and we were lucky that it was a short ride to get back to the barn.

Ashke moved at his run-walk all the way home, which was almost drama free. As we were walking along the side of the road the hundred feet between the trail head and the barn entrance, an idiot coming down the hill toward us crossed a double yellow line and accelerated to 50 or so to get past a guy in a truck who had slowed down when he saw us. I yelled and J yelled and I saluted him in the only appropriate manner when in that situation. I wish I could have gotten his license number, because I would have reported him to the police. I swear, people are so stupid.

Ashke was dry and ready for his mash when I put him in his stall. I didn't even bother to tie him, I just dumped his mash into the bucket and let him eat while I unsaddled him. I pulled my saddle and gear and threw them into the truck to take home and clean. When I pulled his boots, I discovered that the one on the right front has twisted during our ride. I don't know if I put it on wrong or if the shape of his hoof caused it to twist. I will need to be very careful next time I put them on to ensure that doesn't happen again. I put his heavy blanket on him, because shivering, and snow, and dropping temps.

The best gift of the day was T saying, "I'm going to have to go out with you more often, because that was a lot of fun."

I hope you all had a great day with lots of wonderful food, lively company and love. For those of you who had to work, I hope the time you take to celebrate (not on xmas) is as wonderful, warm and lovely as mine was. Thanks for reading and for those who have become friends, I hold you in my heart on this day.

Posted with Blogsy
Posted by Cricket at 8:22 AM