J and I planned to do some more exploring around SQA today. There is a trail that leads off on the south side of the canal, just south of the barn. We wanted to see where it went. Somewhere in the back of my mind I think I was hoping it would take us to the Mesa or the Fairmount, but mostly just wanted to see if there were other areas we could access to ride.

I got Ashke ready and really struggled to get his gloves on his feet. The 0.5W I just bought for his front feet don't fit and even though I got them on, as soon as I mounted up he was head bobbing lame on his right front. I pulled the boots and he was fine. I'm glad his feet are changing, I just wish I had known before buying the gloves. So we headed out bare footed under a cloudy sky with a wind beginning to blow.

We should have just ridden the park across the street.

The trail we first tried led us around to Bibber Creek Stables. We kept moving north and ended up wandering around a couple of lakes. 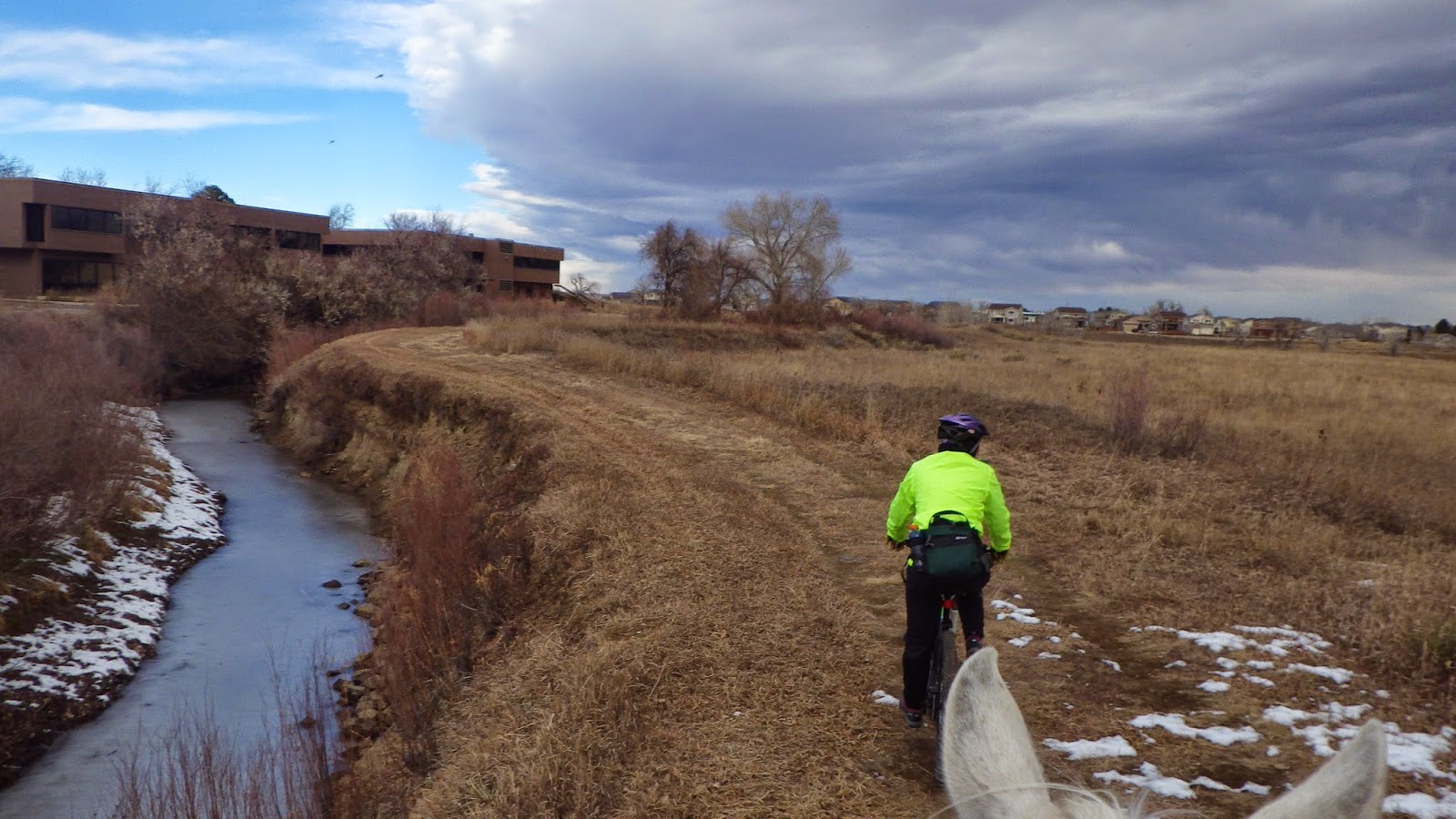 It's frustrating that none of the trails hook up. And a large porportion of canals are privately owned. 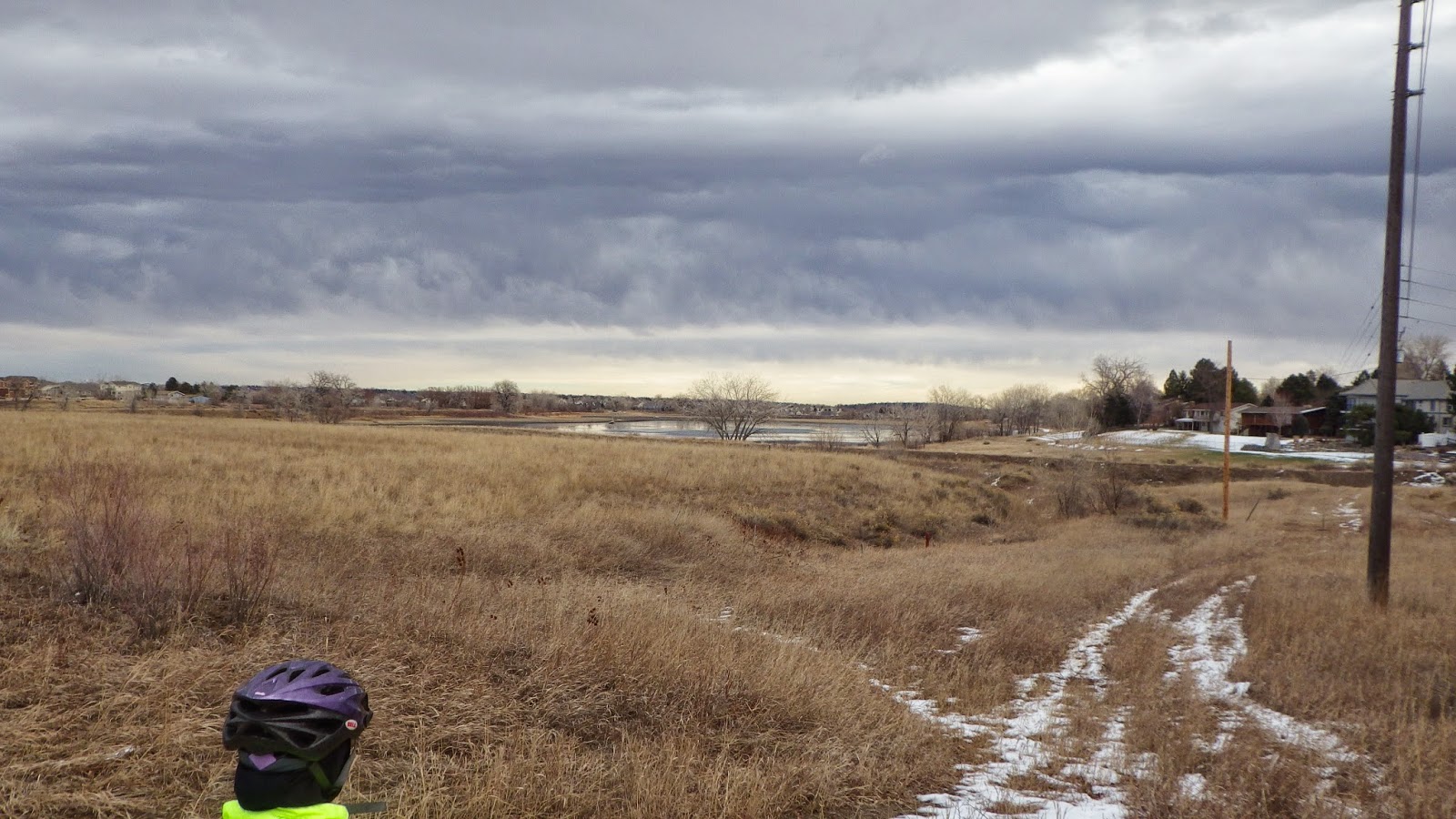 Ashke had a pretty big spook from a flock of ducks taking off out of the canal we were riding by. I can report that wearing the breeches inside the bibs was a much better option. Not so much sliding around. 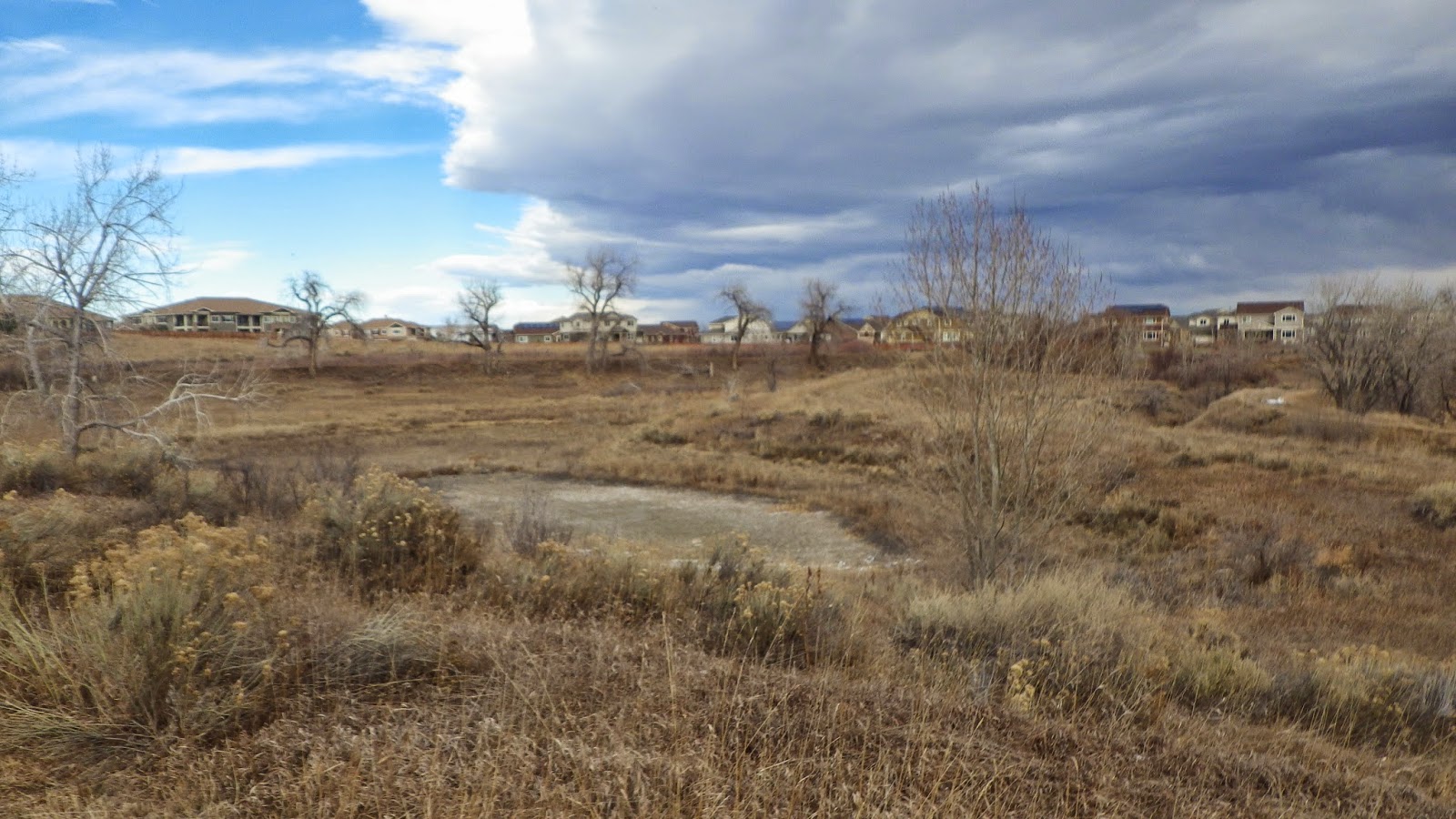 We ended up in the subdivision of the houses you can see in the background. 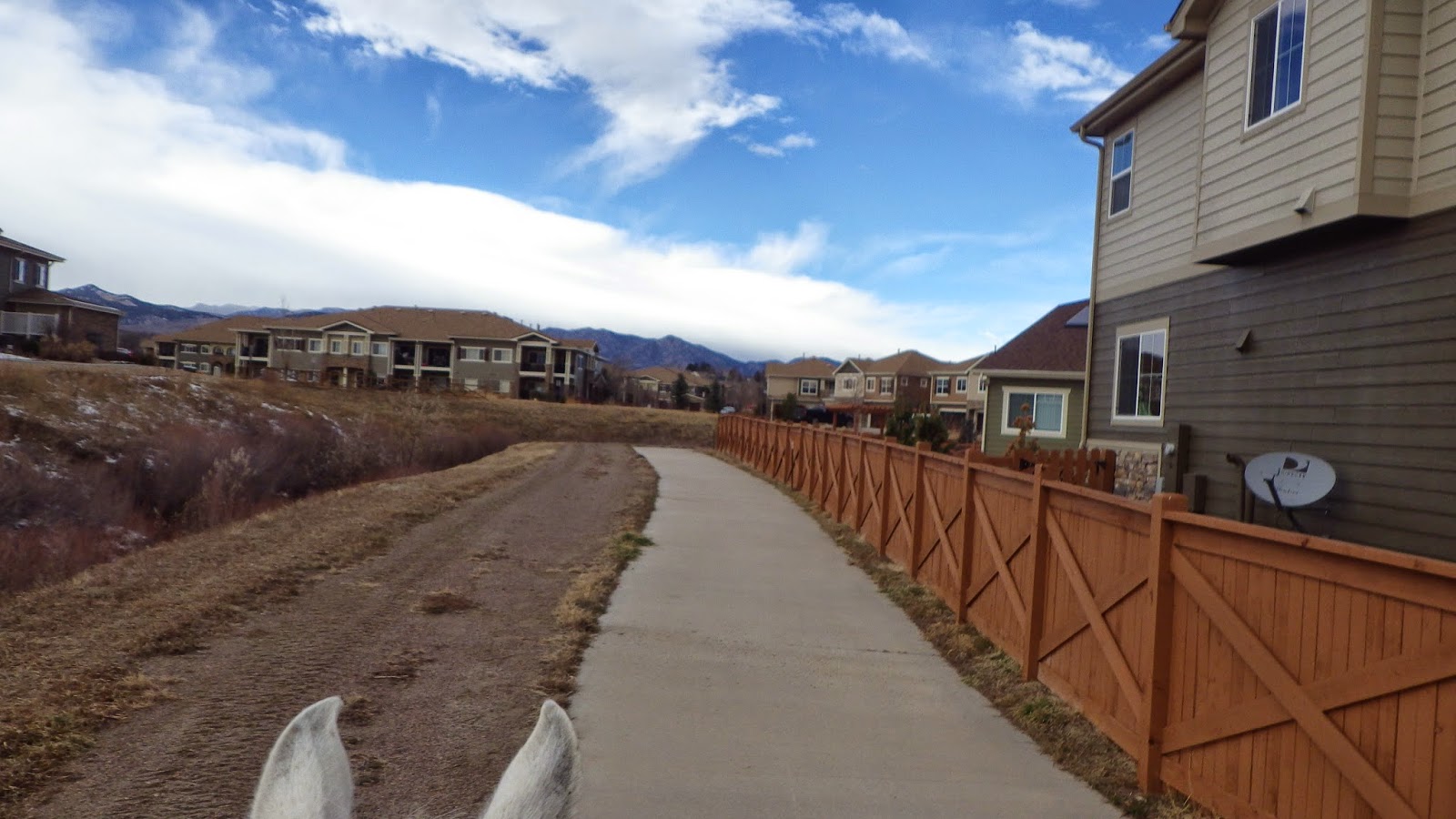 What looked like a pathway around the subdivision, was really a road to no where. 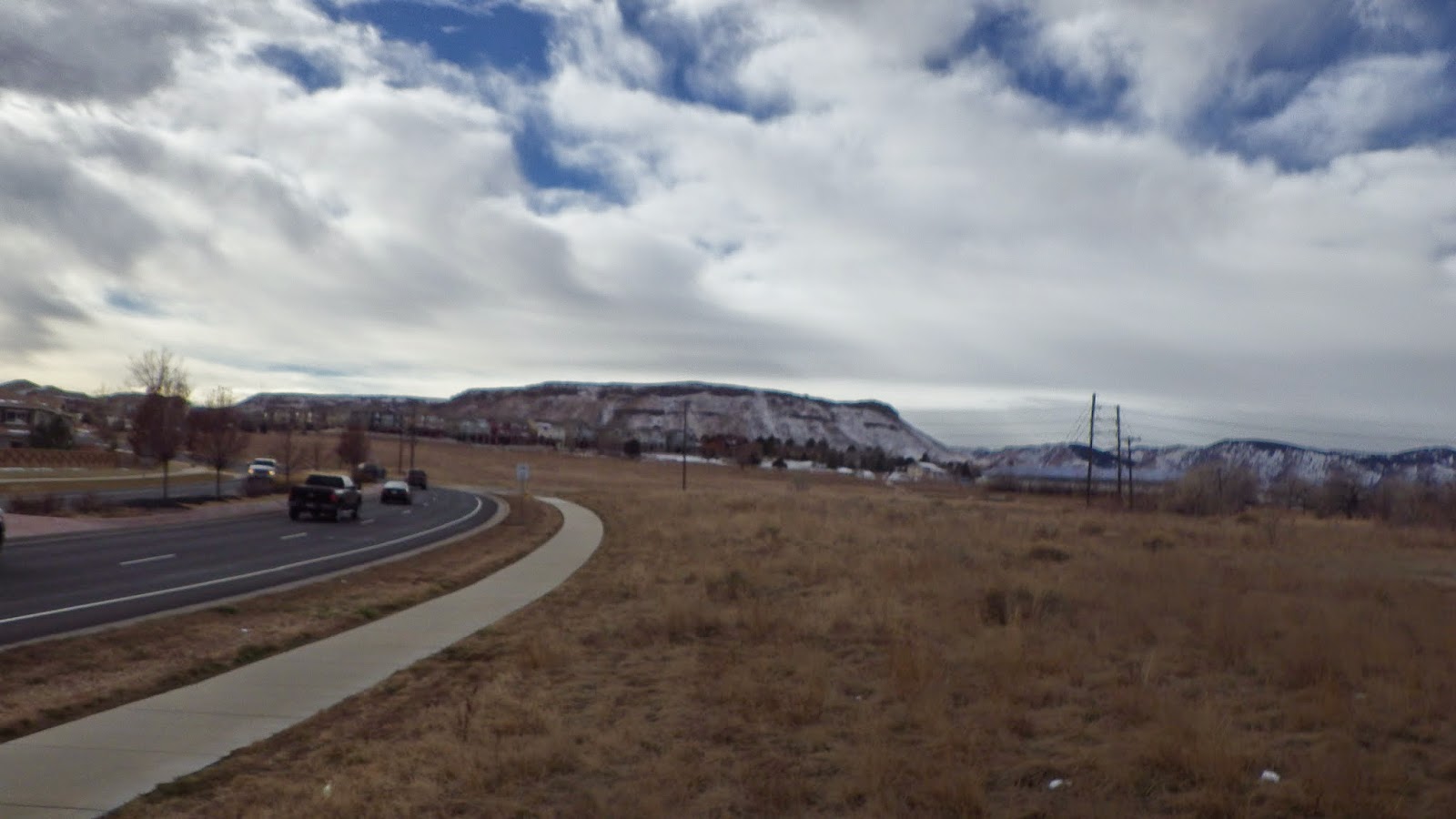 We crossed McIntyre (very busy road) just south of the King Soopers and headed back south. I knew what we needed to do to get to the canal, but we hadn't ever ridden it on horseback so it was pretty much an unknown. J hated riding near any street that was even moderately busy. 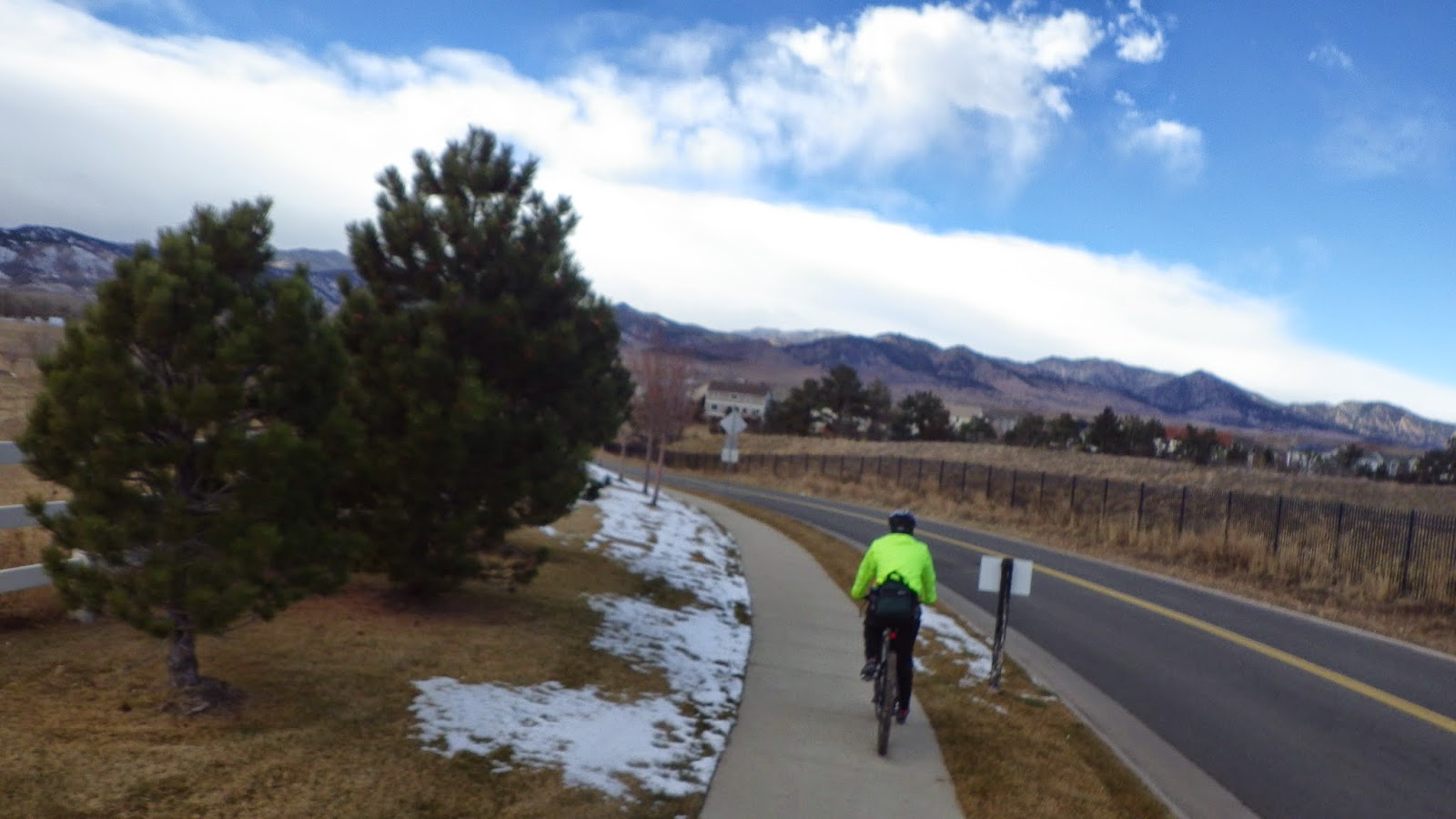 We turned west on 60th ave and wandered our way through the subdivision to the road that leads down to the Fairmount. Just west of this picture, the road narrows and there is very little shoulder, but that section of road was only about 100 feet long and then the shoulder and sidewalk began again. J went ahead of us and Ashke and I moved quickly. Luckily, there was no traffic while we were on that section. 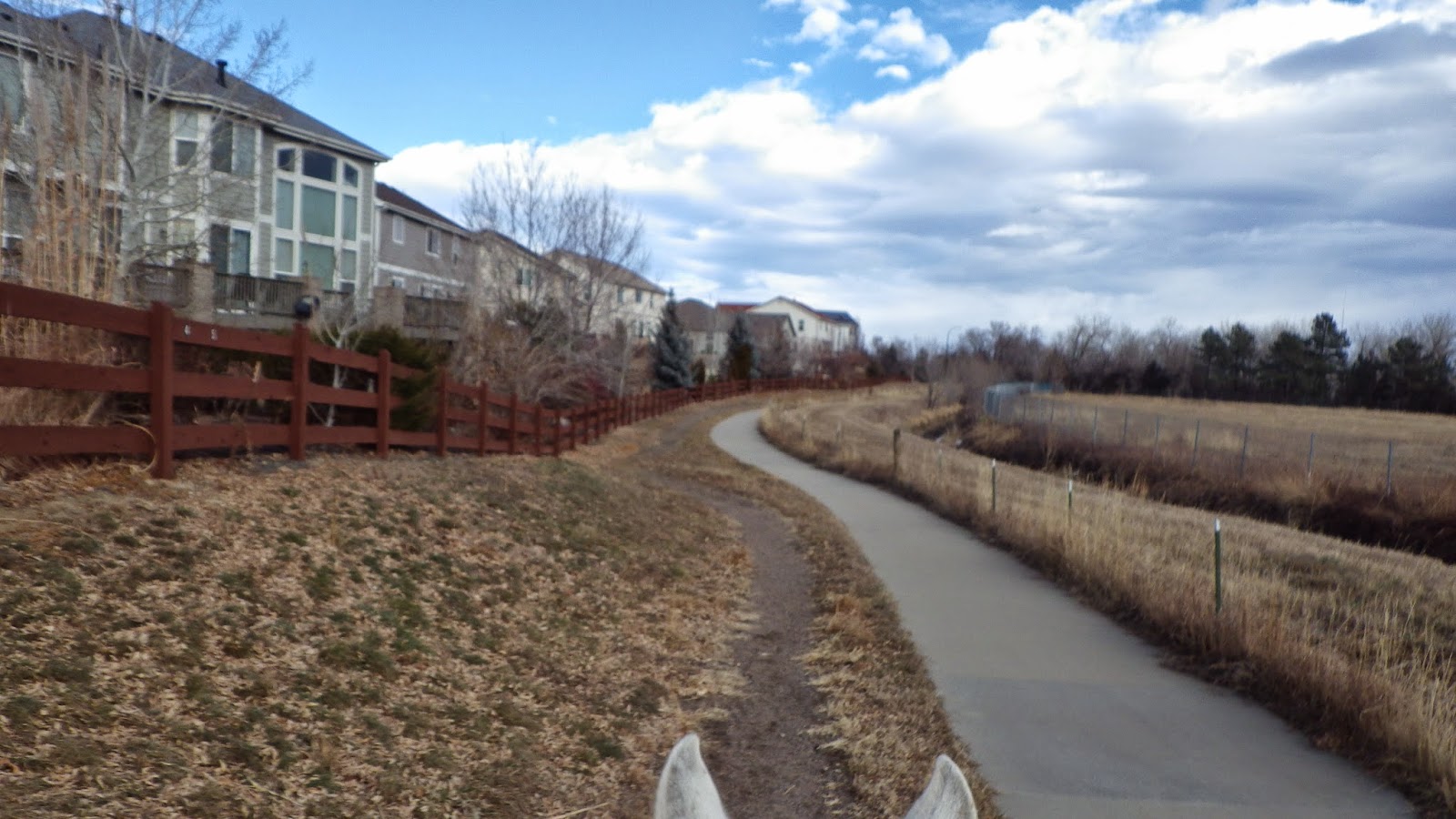 There was another path that headed North, and we followed it to a canal that lead west again. 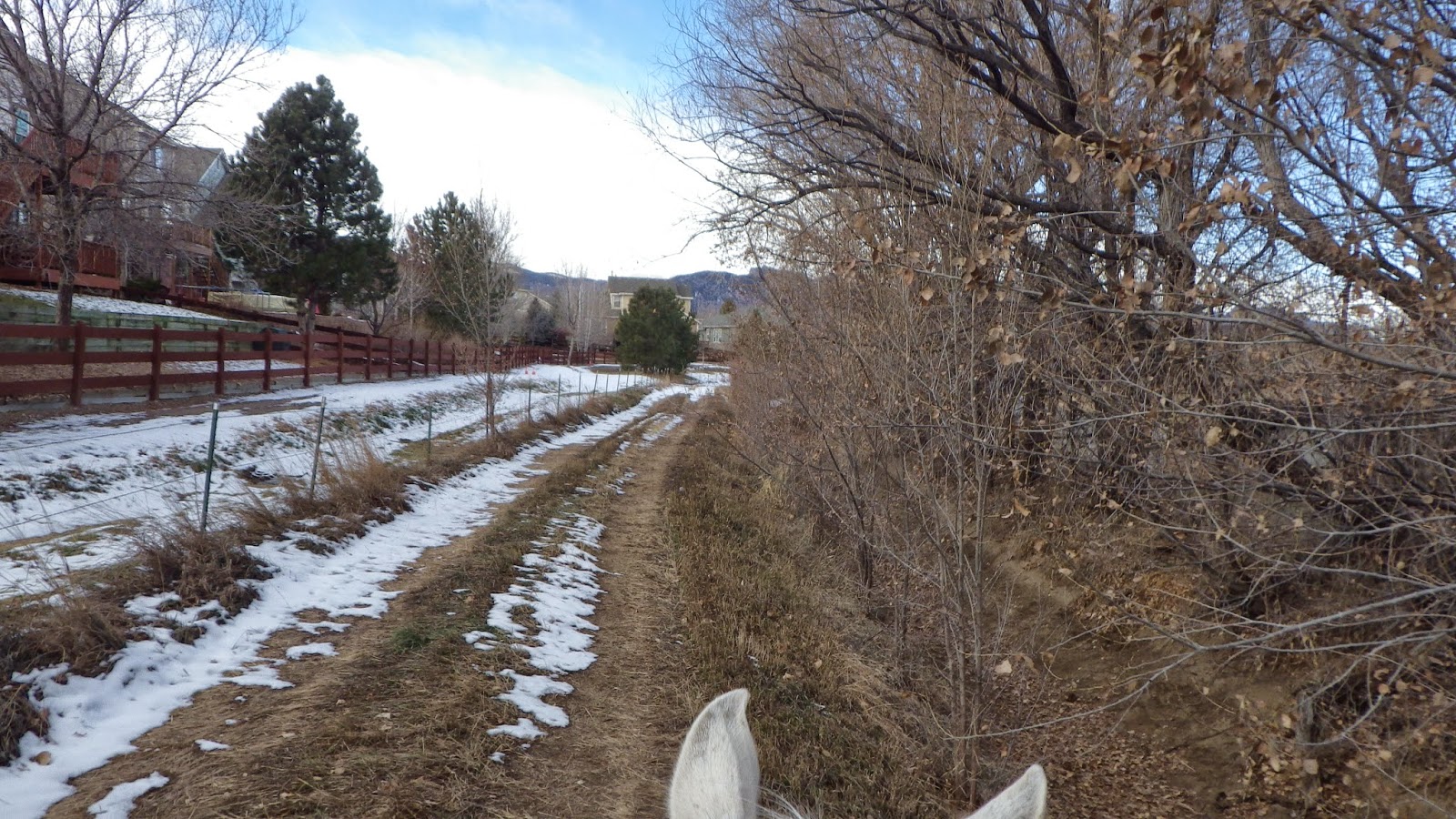 The canal was pretty nice but it eventually turned north again and dumped us out onto 64th, which is a six lane road, with very fast traffic. J was stressed but Ashke handled it really well. 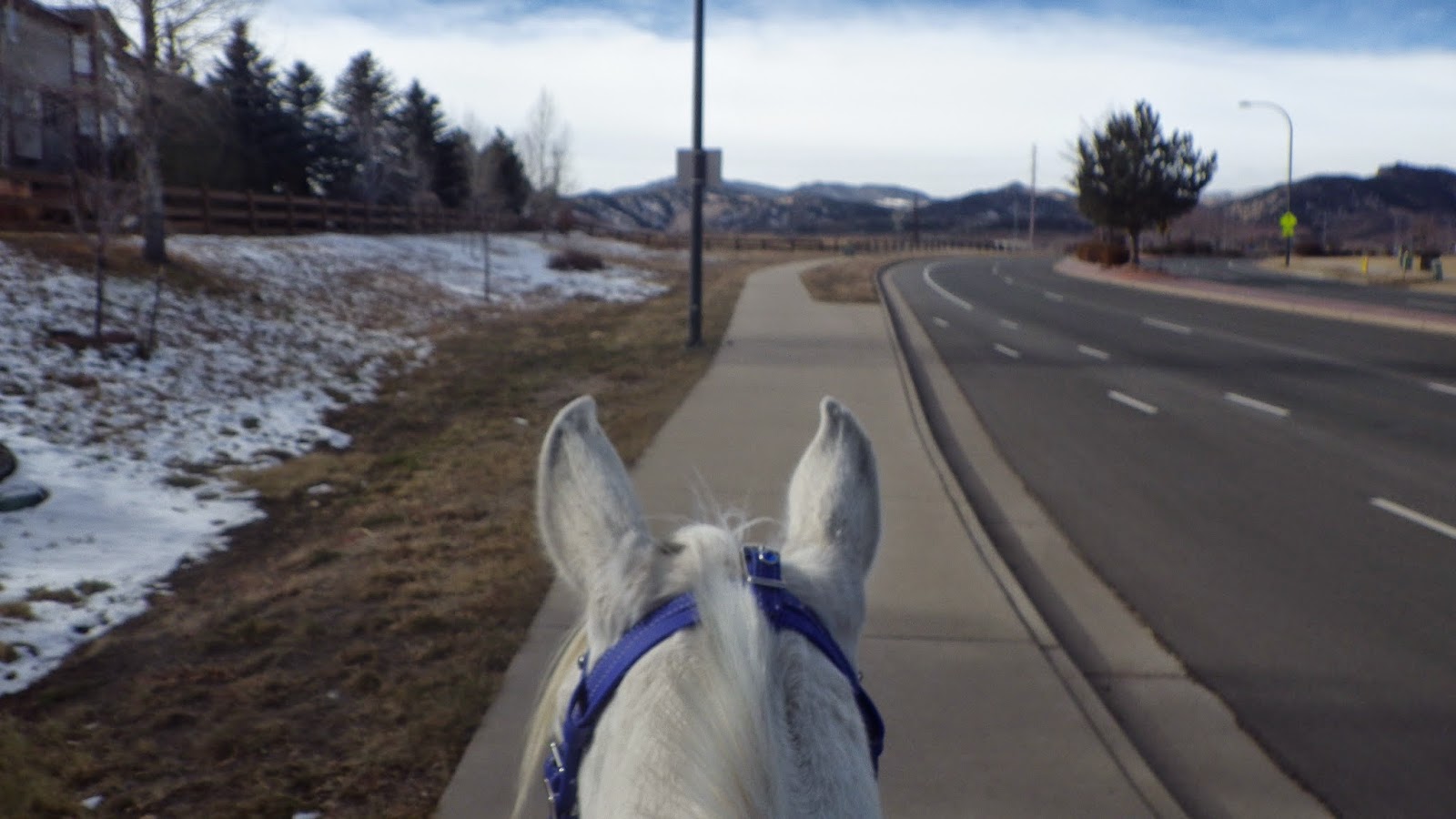 This was the exact moment when Ashke realized where we were in relationship with the trails he knew.

I really thought it would be cool to find our way to the trails we were riding out of TMR. I love some of those trails and thought it would provide continuity for Ashke if we could still ride them. And who knows, maybe we would hook up with some of the people from TMR and ride together. I didn't think about it from Ashke's point of view.

At this point, he thought he was going home. To TMR. To the place that has been home for two years. He was not happy when that wasn't want happened. I was not happy about riding a horse that kept looking back over his shoulder and who needed a lot of leg to keep him moving forward. 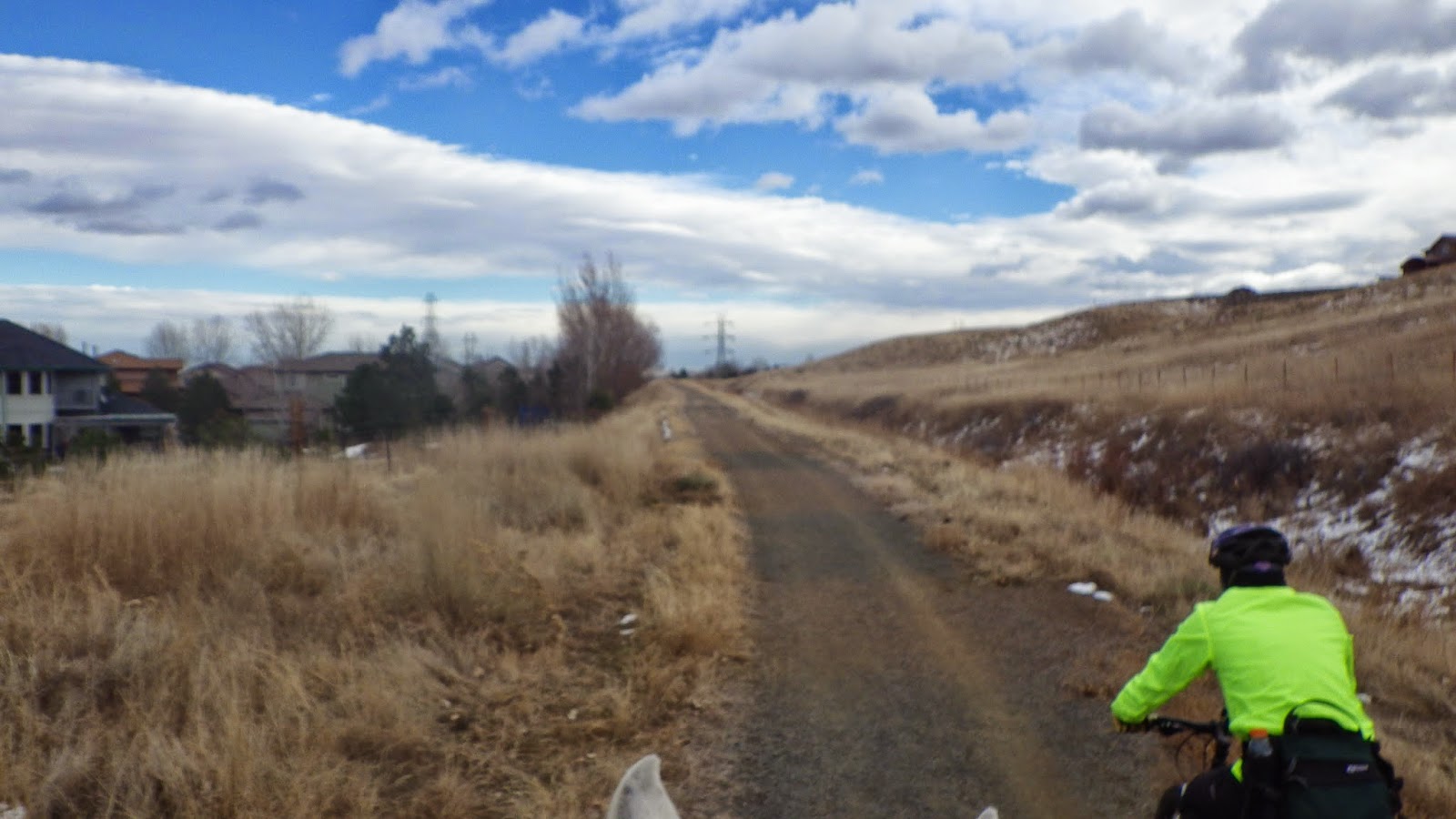 On the canal at the base of North Table Mountain. 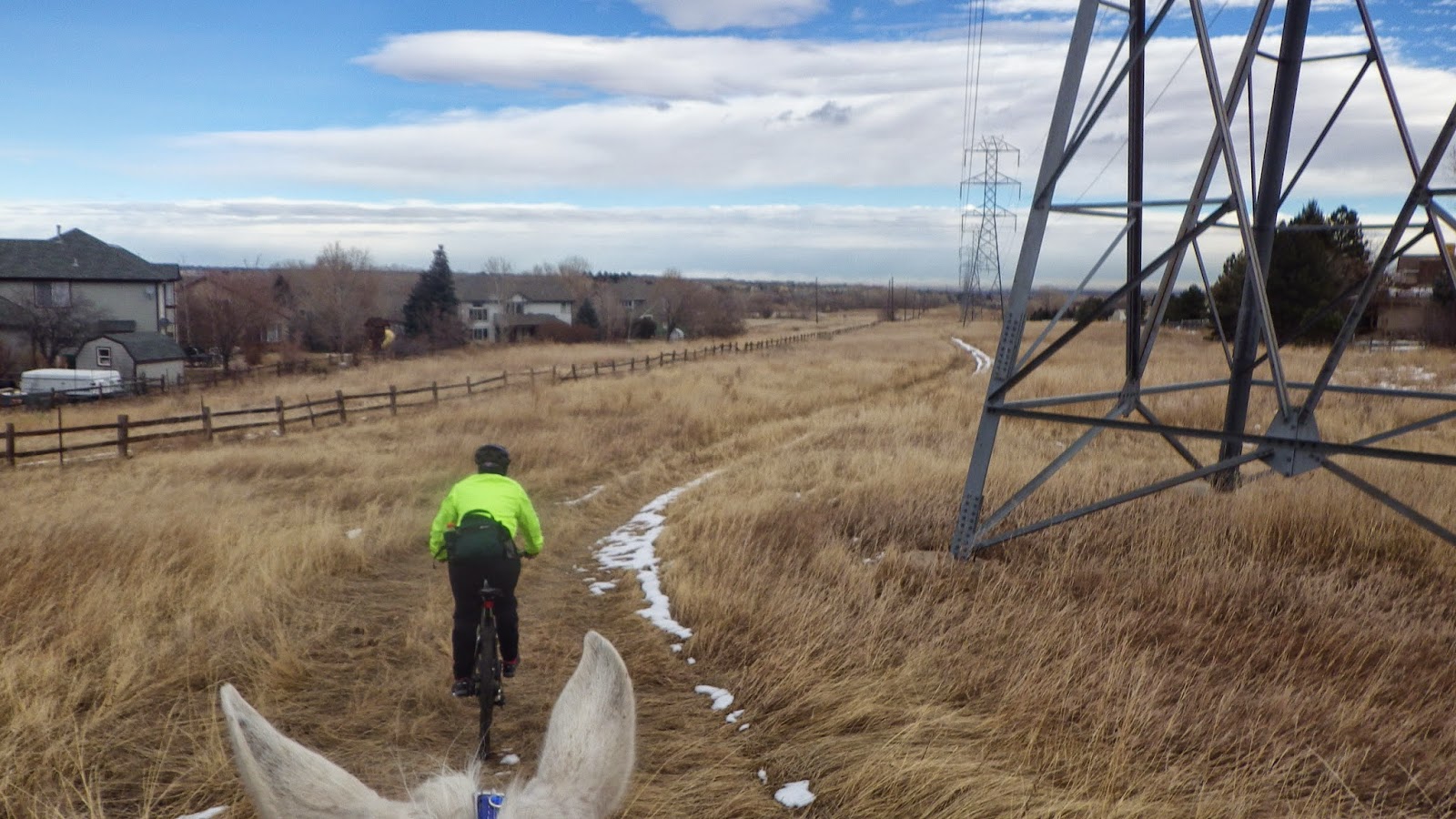 We did get to ride a trail I have been looking at for two years, but it didn't lead anywhere.

We ended up riding on the shoulder of Easley, then turned down 54th, which has a shoulder that is maybe two feet wide and the cars drive way to fast. Added to that, the wind had started blowing and I was riding a horse that was dragging his feet just like a three year old forced to leave the park. I was so frustrated and J was about out of her mind with the stress of riding in unsafe, narrow roads. We finally found the access road I was looking for, turned south and maneuvered our way through another neighborhood. 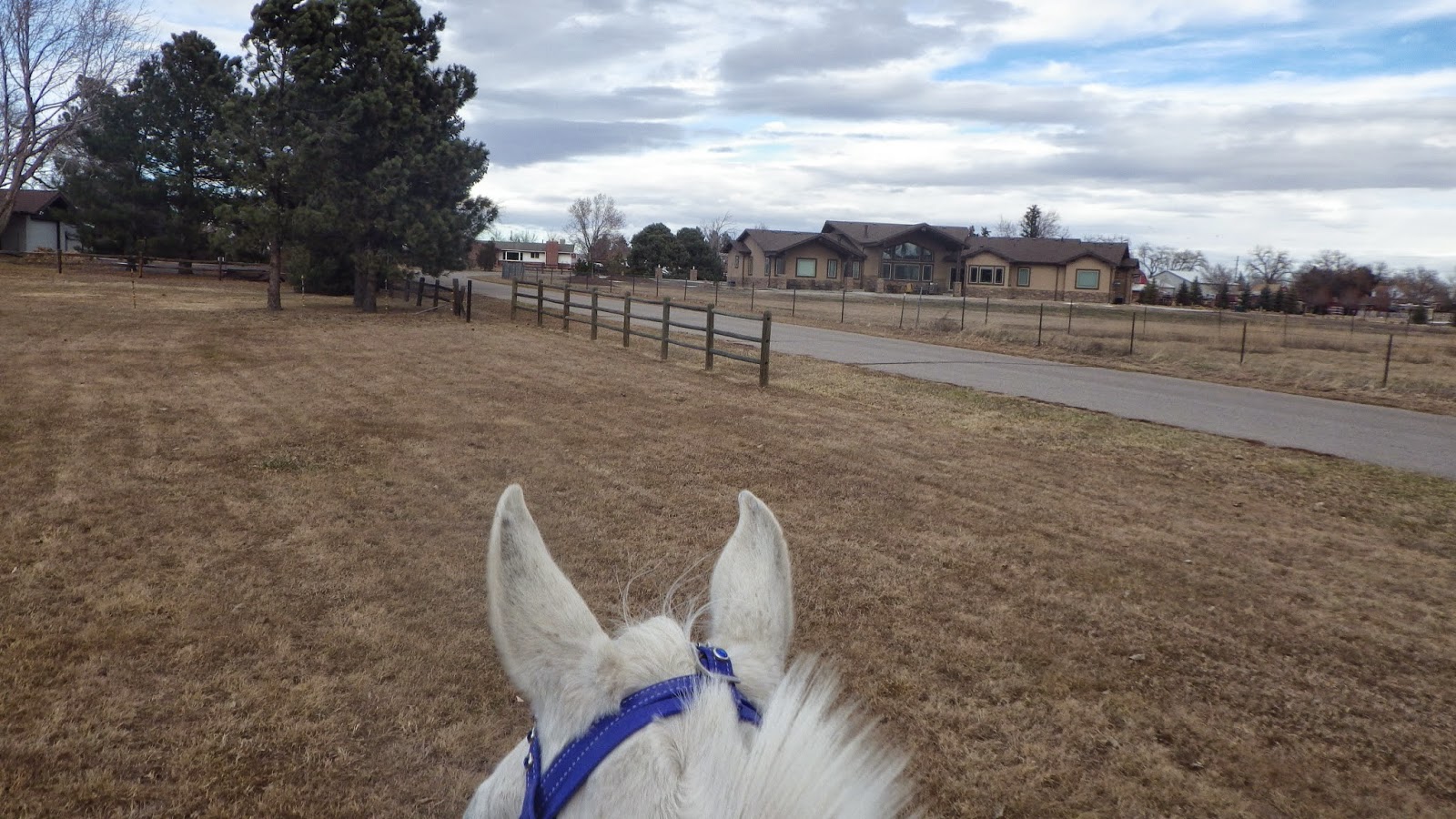 We did a lot of walking. Some trot and a couple of brief canters, but mostly walking.

We got back to McIntyre and found access to another canal. We followed it down to where it turned private. We stood at the gate and stared at the trail we rode out on in shear frustration. We wandered through the subdivision and finally came out next to the trail we had ridden out on. Ashke stopped and stared at the barn and I could see the wheels whirling in his head. My poor confused boy.

I won't do that again any time soon. We will either ride in the park across the street or we will haul out to the trails. 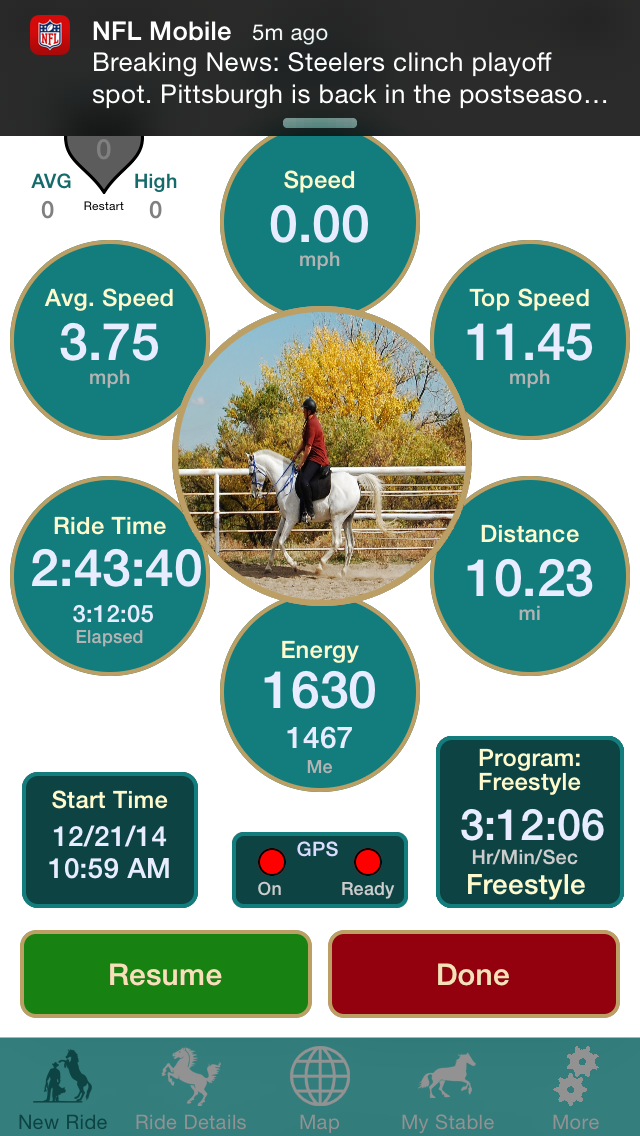 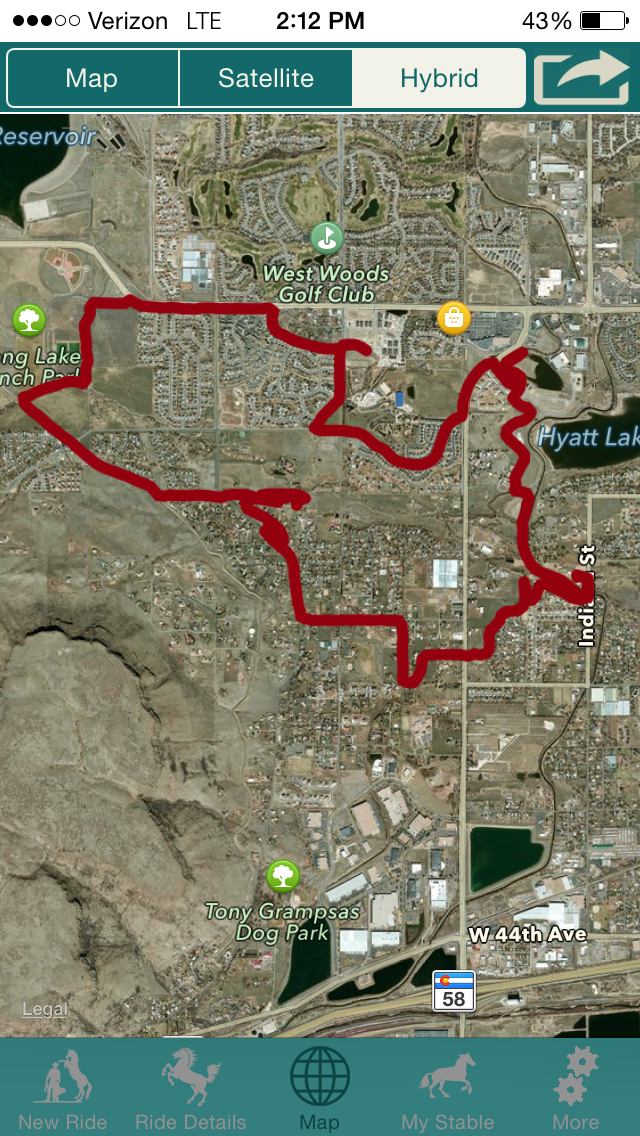