The Story of T: One

My hospital stay was marked by several things. First, epidurals are good things. Even after they unplugged me I was giggly and high for about an hour, proclaiming to anyone I met that I loved epidurals and highly recommended them. I think they all thought I was demented. J just patted my arm and said "Yes, dear." Second, if you are going to have a baby, arrange to have food brought to you by a friend or relative after the birth (whenever that is) or pack a cooler with food (not snacks) because you are going to be hungry. By the time T was born, the cafeteria was closed and there was no food available. I begged for something to eat and the nurse finally found a wrapped up sandwich in a refrigerator somewhere. It was dark brown bread with turkey and cheese. Not my favorite, but honestly it didn't matter, I scarfed that thing like a hungry wolf would eat a rabbit.

Even after T was delivered, my blood pressure was still high (pre-eclampsia) and my heart rate was over 125. The nurse was becoming very concerned and they were talking about having a doctor come to examine me. I asked the nurse if I could just take a shower. She led me down the hall to the shower rooms and left me with soap and shampoo. By the time I was done (it is difficult to move quickly at that point, I discovered) my bp had fallen and my heart rate had returned to normal. As so often happens with me, water did it's magic and restored me to myself.

Before going on, I need to back up and share an experience that shaped how J and I raised our son. I love movies and at some point during my pregnancy I watched the movie Instinct, with Anthony Hopkins and Cuba Gooding Jr. It's a pretty amazing movie, but the part that struck me the strongest was the final scene between Anthony Hopkins and his daughter. He is telling her about his experience with the gorillas and he explains how the mother gorilla, after having her baby, picks him up and takes him with her every where. He then goes on to tell his daughter that if he had his life to live over, he would take her with him every where. That became our guiding point: I would take T with me everywhere I possibly could. So, from the first moment in the hospital, either J or myself was with T.

T was jaundiced and needed bili lights for three days, but wasn't bad enough that we couldn't treat him at home. He also swallowed some amniotic fluid and needed his stomach pumped that first night in the hospital. He never figured out how to latch on, so I pumped and we bottle fed him breast milk when we had it and formula when we didn't. J stayed home with us the first two weeks and then went back to work. I had thirteen glorious weeks with the little man.

When T was 10 days old, my BFF came over with her then girlfriend to hang out with us. At some point she asked if she could take T upstairs. I asked why and she said it was a surprise. They were gone for a very long time. I finally said to J, "do you think we should check on them? I mean, how much trouble could they get into?" Then we thought about it and raced upstairs to see what was happening. S was stripped to the waist, Jay was stripped to the waist and T was naked. They were all covered with blue paint. There was paint on the floor, the sink, and the ceiling. It looked like a blue paint bomb had gone off. Jay looked up at me and said, "I took off his clothes so if he got paint anywhere he would be easy to clean. As soon as he had paint on his hands he grabbed his penis. And then everything else." 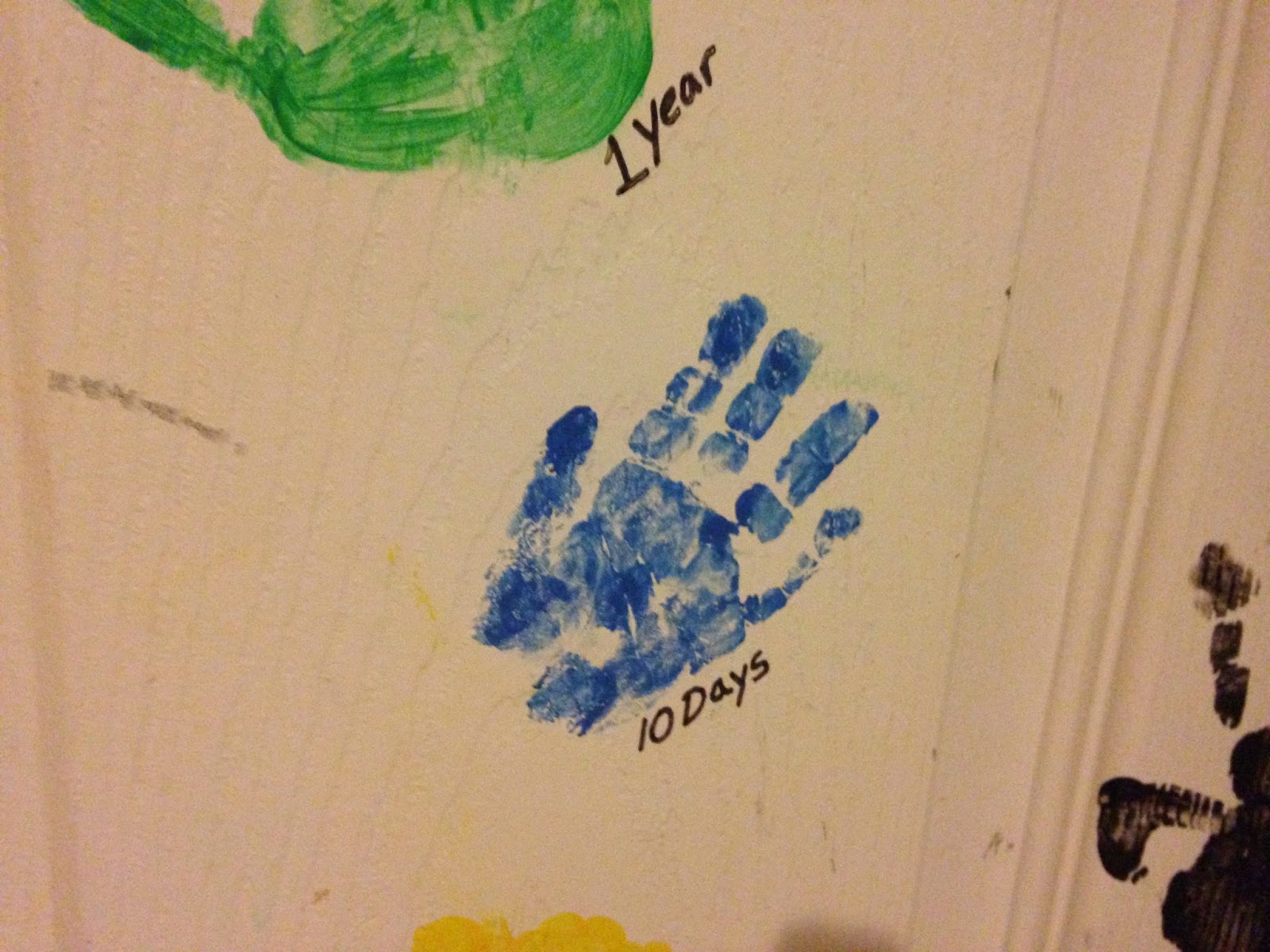 His hand print at 10 days old.
Jay had painted T's room with a huge tree in one corner and the characters from Winnie the Pooh on the walls. That was our theme. Of course, he never slept in the room until he was almost four and by that time Jay repainted it in super hero decor. 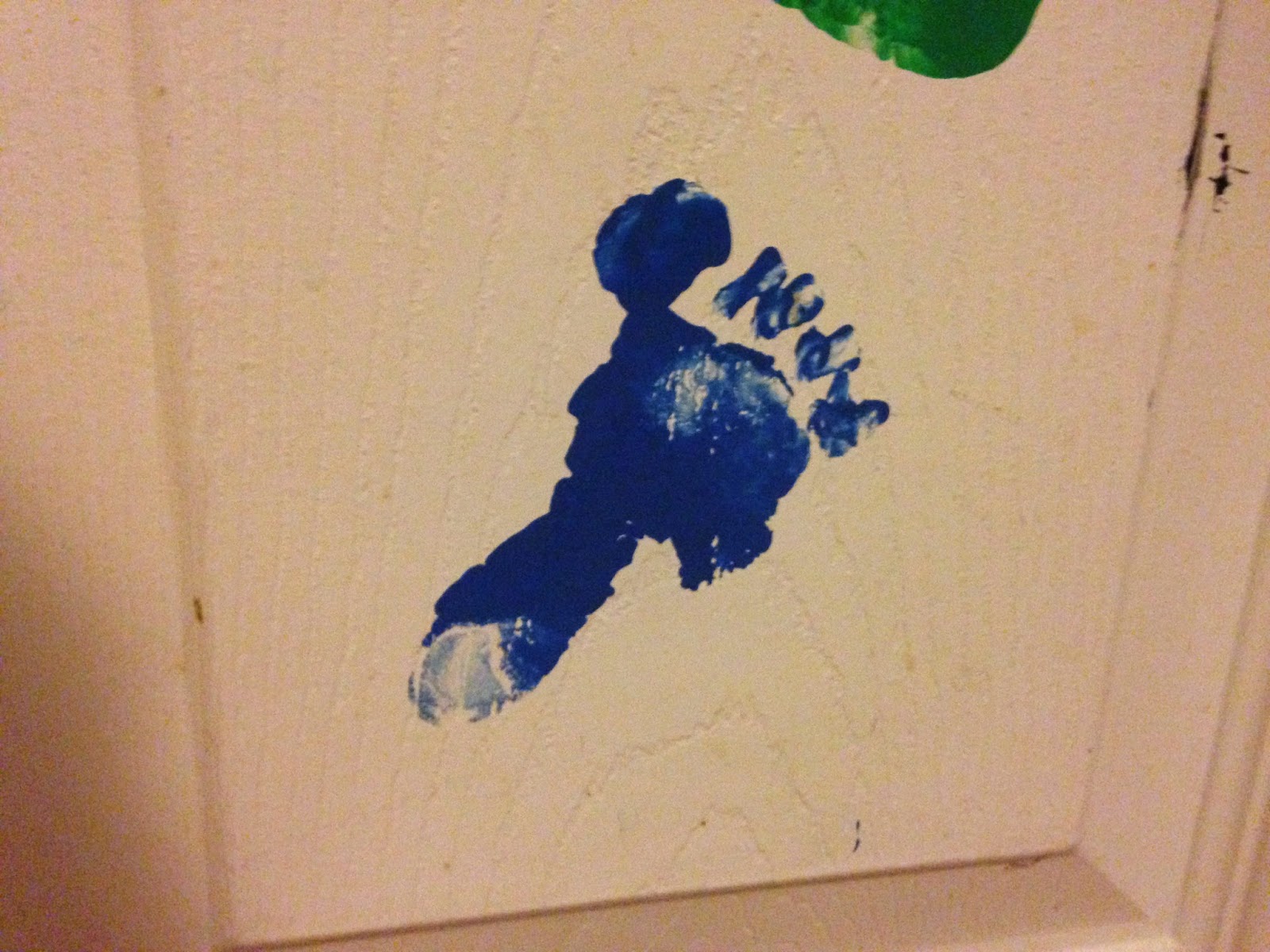 And his foot prints.
It became a tradition. 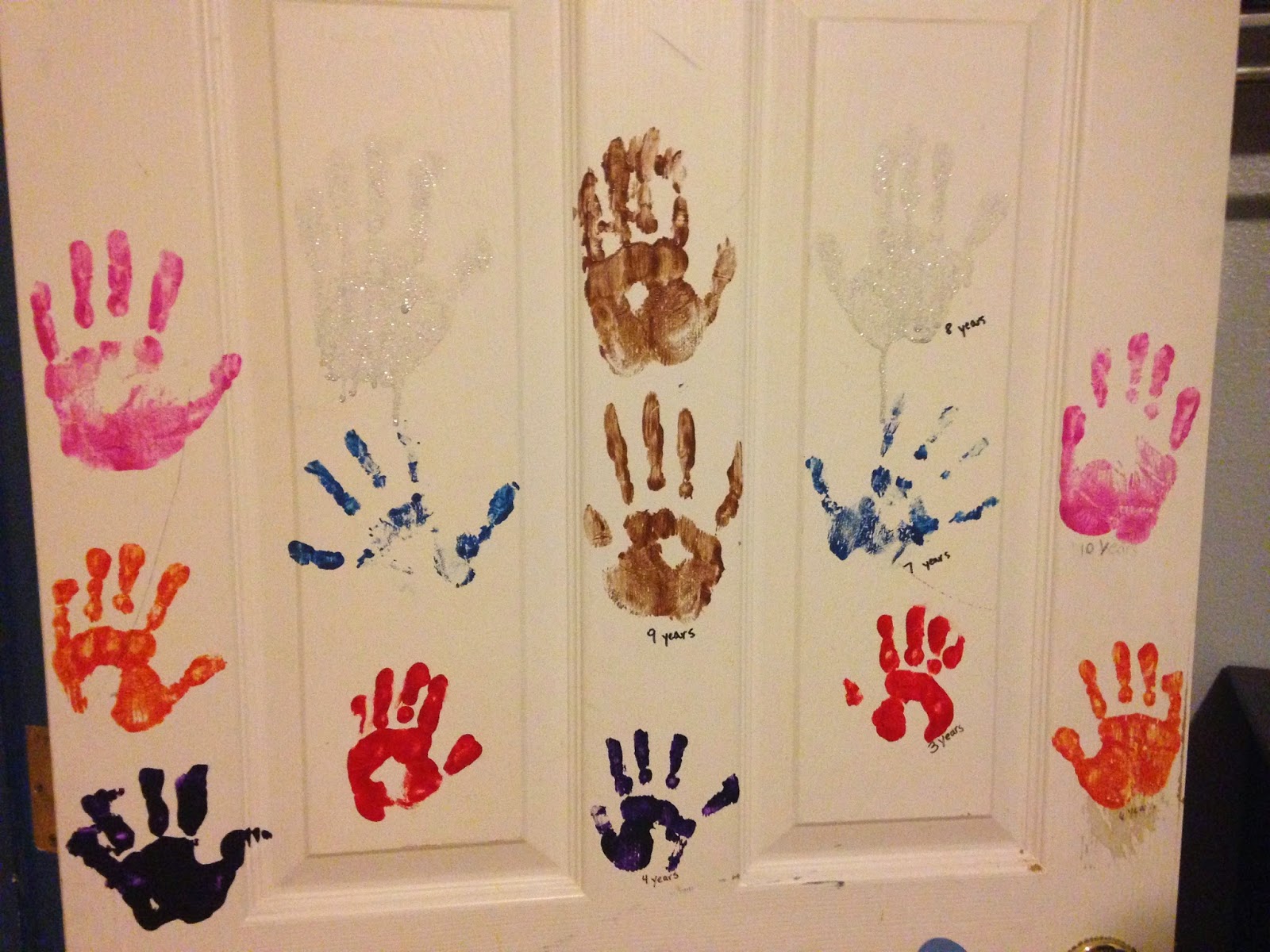 Every year on his birthday, we put his hands and feet prints on his bedroom door.
We finally ran out of room when he turned ten. The pink prints were his tenth birthday and the last time we did that. 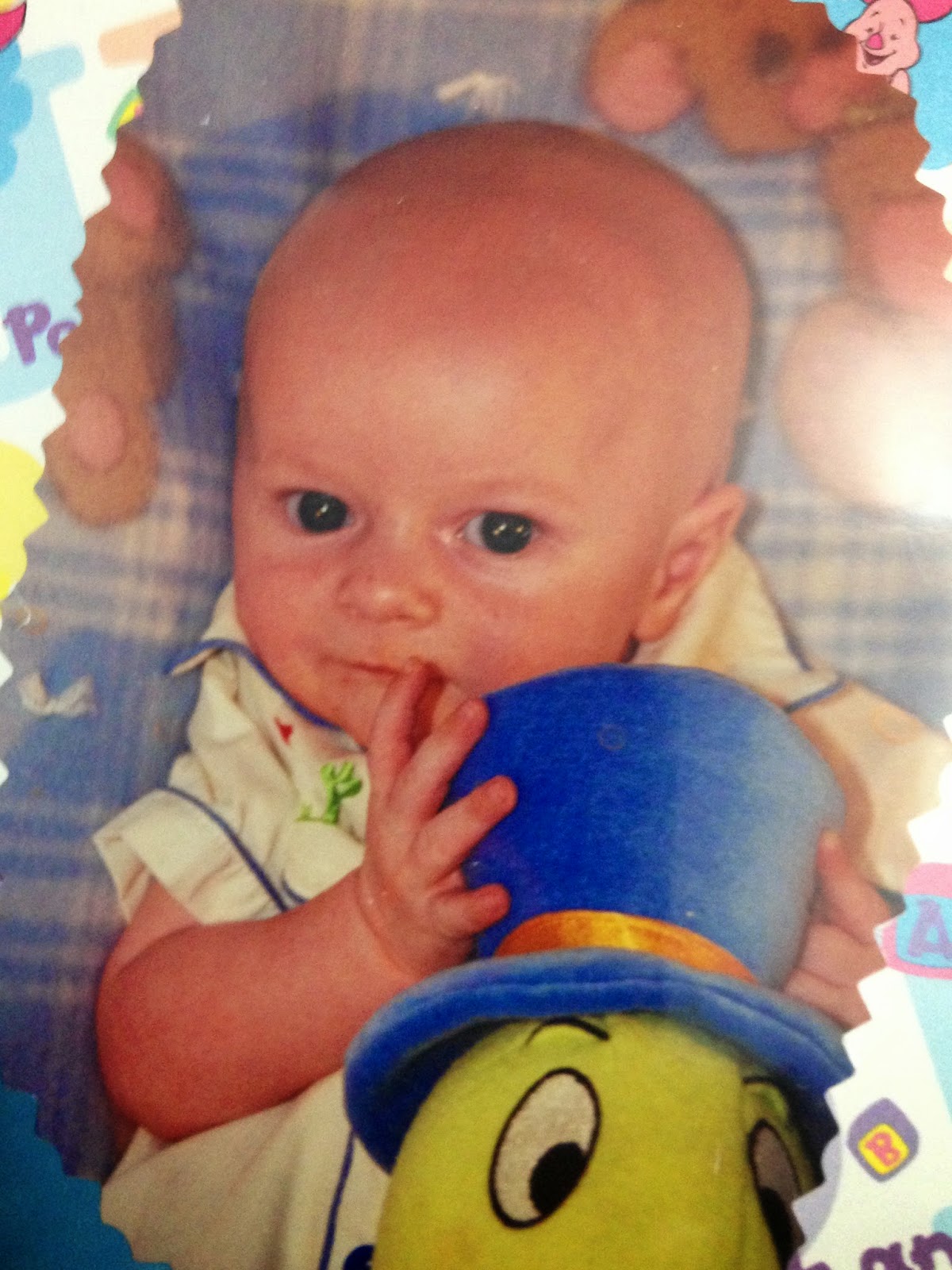 He was hyper aware from about three hours after he was born.
This is him a couple of weeks old.

I sang to him when he was little: Puff the Magic Dragon, The Cruel War, Two Little Boys, Amazing Grace and other songs I had learned when I was in 4th grade. I do not have a great voice, but he didn't seem to mind. 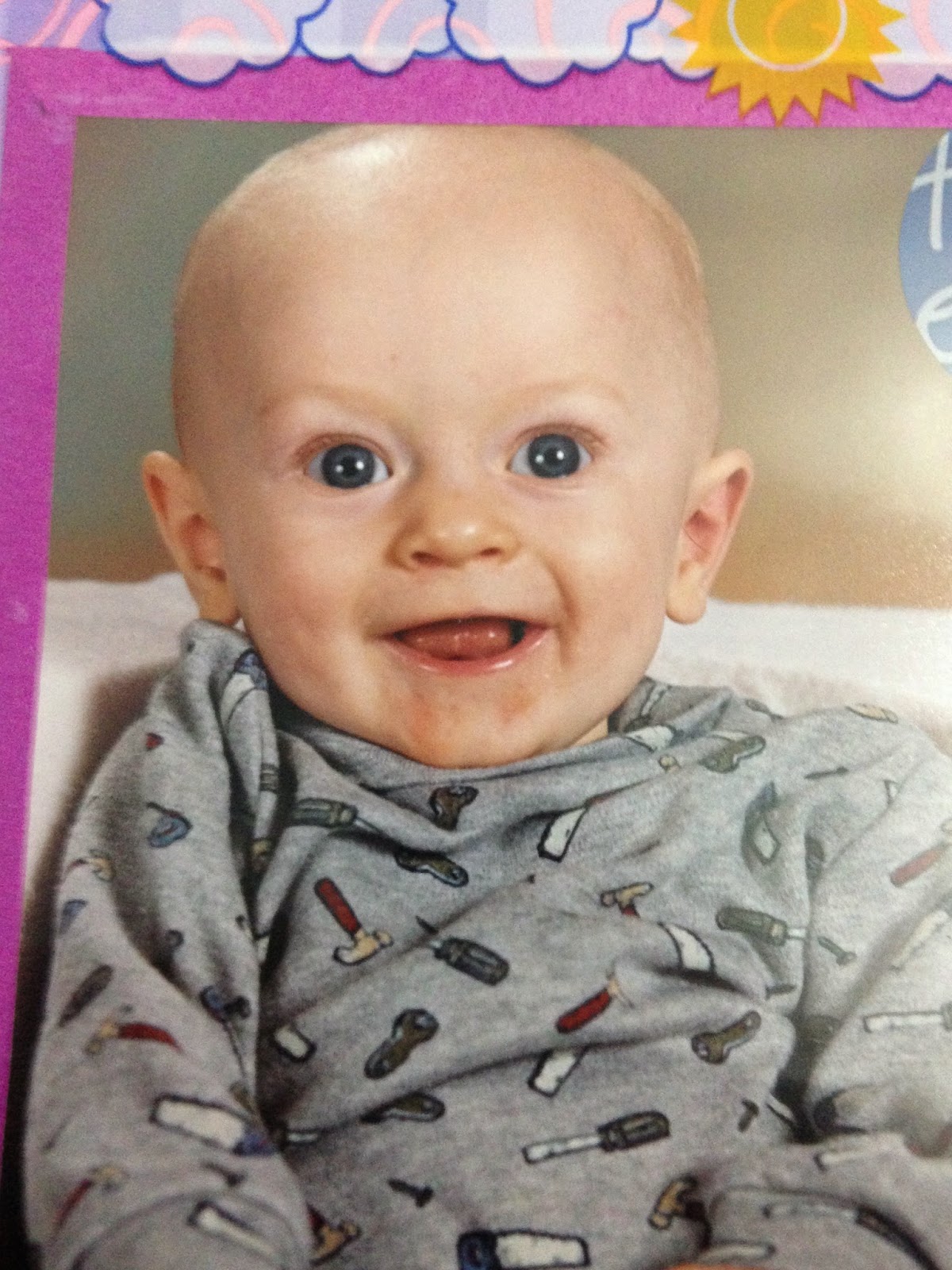 First set of pictures. He was a really happy baby.
He slept on my shoulder or in my arms for the first year. (We could have used a co-sleeper).

He started on rice cereal at three months and we never seemed to be able to get enough food into him. We would mix his baby food with the rice cereal to help fill him up. He liked all the veggies, some of the meat and all of the fruit. He started on finger foods and soft biscuits before he turned one. He had ear infection after ear infection and finally had ear tubes put in at eleven months old. 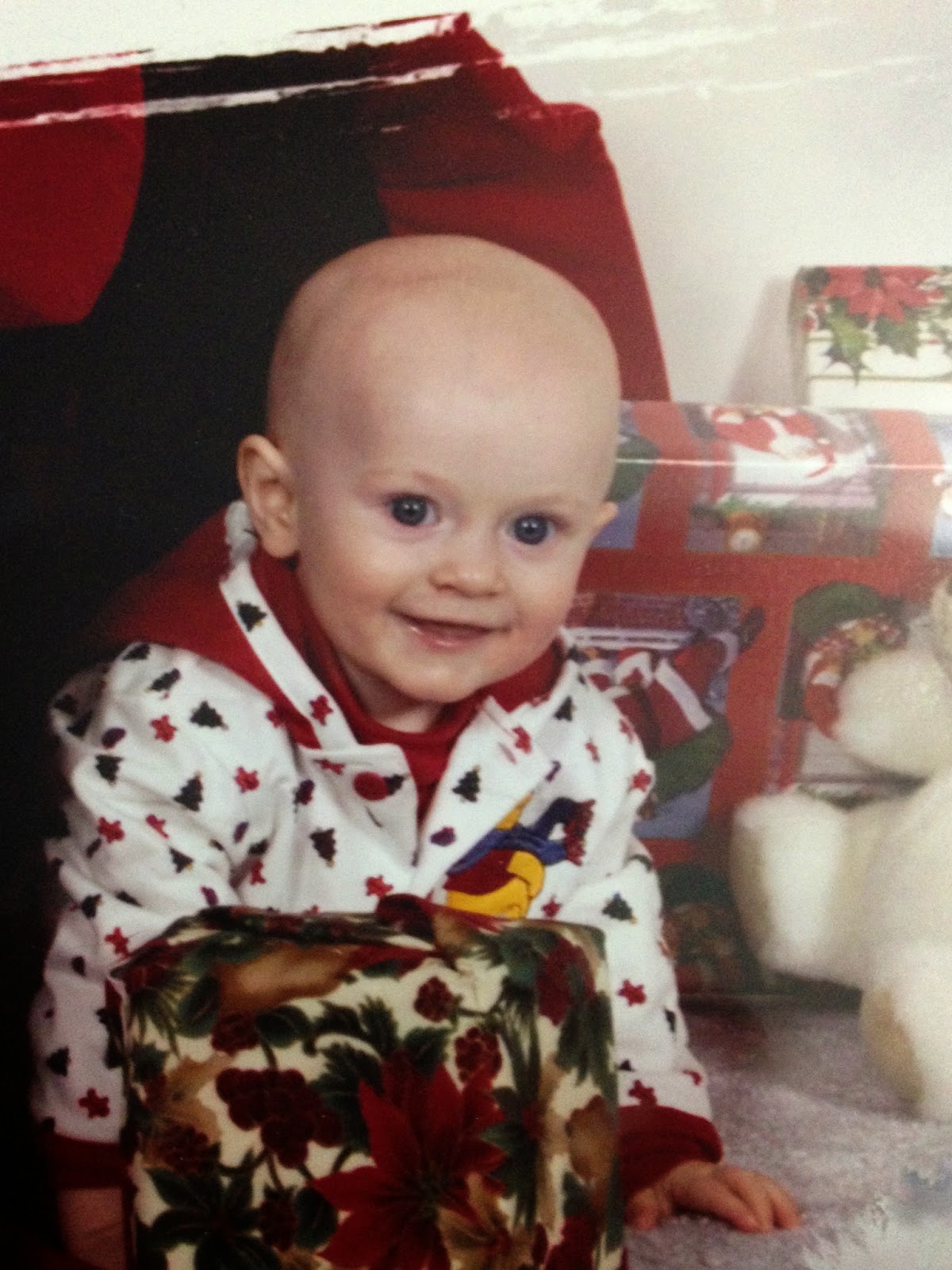 He didn't learn to crawl until Christmas eve. He would get on his hands and knees and rock, but not crawl forward. Once he figured out his crawl, it wasn't long before he was running. It doesn't seem like he has ever stopped.

T's first word was Ah bla. We finally figured out that it meant "What's that?" From that key word, his language acquisition took off. We would carry him around and he would point at stuff and ask "Ah bla." We would tell him the name for the word. He was never one for putting things in his mouth, and because of that, he got his first matchbox cars for his first Christmas.

For his first birthday, we got pictures of him walking (he walked at eleven months) when he went to the zoo in his new Radio Flyer wagon.

His nicknames were Bug, Bug-a-boo, grub. His favorite toys were Spotty Dog, Baby Tad and his moms. He went to Little People's Landing from his fourteenth week until he was a year old. His favorite play places were the play place at the Cherry Creek mall (soft eggs and bacon and banana to play on) and the park in Boulder (loved the swings more than anything).

And we took him with us everywhere.