Saturday started early and we met K at the barn by 7:45. Once the trailer was hooked up, it was a matter of minutes to get the boys loaded and on the road. J figured out that if she turned on the tow load option on the truck (first time trying that) it made the braking and acceleration soooo much smoother. IDK why we were surprised, considering the truck came with the tow package. The trip was uneventful and we reached Dr D's about ten minutes early. I stripped off the BOT blanket and quick wrap and took Ashke to the round pen. 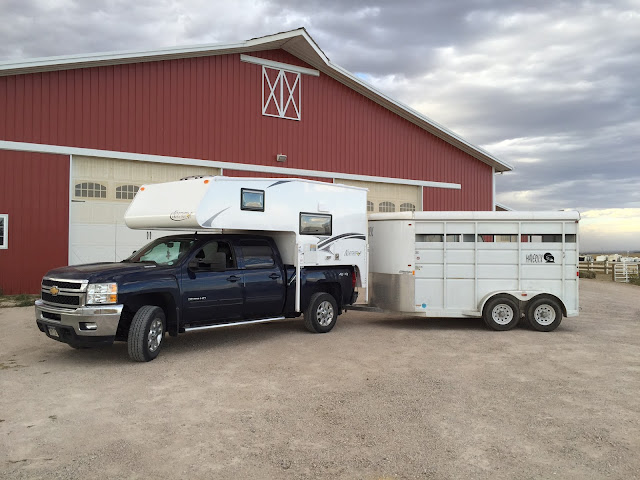 J testing the turning potential with the trailer. We needed to check to make sure there was enough distance between the end of the camper and the front of the trailer to keep them from banging into each other. This was cranked as tight as we could get it and there was still 20" inches between the two.

It amazes me how willing Ashke is to talk to Dr D. There are things that he might mask when we are working together (he can be rather stoic with pain, the same way I am) but with her he is engaged and very open. He also loves to see what she is doing, following her around and getting in her way. I came out with the expectation that his neck was out, but wasn't sure about the rest. 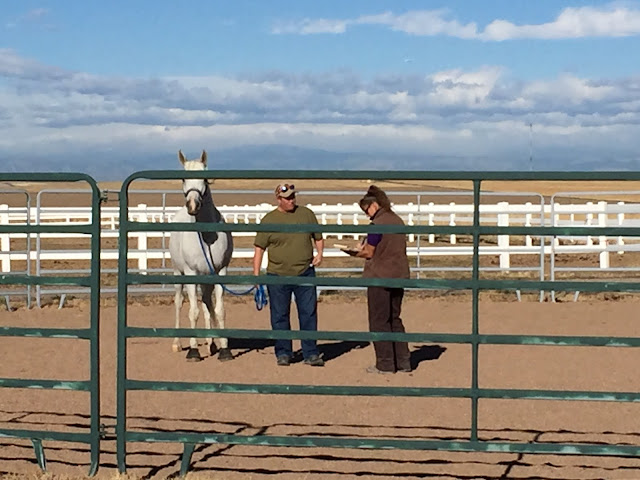 In the round pen we do w/t/c in both directions. Then a trot out and back on a straight line.

Dr D said that overall, he looked really good. She really wasn't expecting a whole lot, but then we got him in the exam stall and he started telling her all sorts of stuff. His poll was out to the right, the base of his neck and down to his hoof. On the left, the two ribs at T9 and T10 were both out, plus he was tight at T12 and L1 (this is his default - he cares his stress here kind of like me carrying my stress in my shoulders). His withers were incredibly sore. Dr D thinks I should carefully evaluate my saddle to be sure it's not bridging, but then we found the ribs and its a possibility that the bridging pain is from him carrying himself differently. I will keep an eye on it over the next four weeks and if there is still signs of bridging, I'll get Megan out again. However, based on everything that happened, I'm leaning toward the ribs being the issue.

I think, and Dr D agrees with me, that these injuries were sustained when Ashke cast himself in the stall and ripped open his leg in the process of getting up. He had a scrape on his face at the same time that I think he got when he threw his head into the side of the stall. Dr D took blood, applied needles to his poll, his neck, chest, shoulder, back and sides. Plus the front of his left front hoof and the back of the right front. If the muscle releases and the accupuncture has worked, Ashke will push the needle out. If the release is big, the needle bends. One of the needles was bent in a half circle as it came out of the right side of his poll. After the needles were in, laser was applied to his withers on each side, and then the injury site on his LH was lasered as well.

Next, Dr D used an actuator to move the vertebrae back into alignment, but Ashke was twitching so badly as she worked across his withers that she stopped and tested the needles. Some of them were still stuck, unwilling to release, so she adjusted Ashke's base of his neck first. He needed her to do that before she could fix his back. The neck moved right back into place (soft pop). Then she was able to go back to his withers with the actuator. Once all of the adjustments were complete, Dr D asked him to stretch.  I verbally told Ashke he needed to lift all the way up through his shoulders in order to fix the ribs. Usually, the horse will lift up through their back and it kind of tails off at the base of the withers. Ashke curled his neck down and in, and you could see him stretch up through his front legs to the top of his withers. The ribs moved back in with a loud crack. You should have seen Ashke's face when they were back in place.

Dr D told me a story about her mare a couple of days ago. She went out to let them into the pasture and the mare had not eaten her hay. Dr D stopped and said, "What's wrong?" The mare turned her head and lifted her right hind leg and pointed to her belly under her leg, like "this is where it hurts". There is a reason I only see Dr D. Ashke is willing to talk to her, to allow her to help him get back to a place of balance and that is more valuable than anything else.

I can't wait to see how he is under saddle tonight. I think the issue we have been having with bending will now be resolved.

Eddy went next and there was very little he needed. The teeth balancing and adjustment from last time had corrected a large part of what was off. K needs to work on making him stronger to the left (I think it's left) since he is very one handed. They spent their time trying a couple of synergist saddles on him. K found one that works very nicely for both her and Eddy and the owner is willing to allow a week trial. I have a dressage girth that should work (it is a western style saddle with billets) so she can ride in it through the weekend. We are planning on the East-West regional trail on Saturday, so that should be a really good indicator of whether or not it will work for her. If so, maybe she can make payments until the saddle is paid off. New, they run $3000 or so. The saddle is in great condition and it puts her in a balanced and correct seat.

Dr D finished up will a slight adjustment to Eddy and we loaded for the ride home. K is going to pick up the saddle this morning and we shall see how it works for her tonight.

That was not the end of our weekend. Wait for Part Three.