After we dropped the horses and the trailer at the barn, J and I headed for home. After parking the truck (this is fun, since typically J backs into her space and the truck no longer has a back up camera) we walked the dogs, grabbed the car, picked up lunch and headed out to watch T's football game. The football game lasted a bit longer than we expected, but the team played tough and almost won the game (the other team had one play with six seconds and managed to score a TD). After the game we headed for the grocery store to pick up food for Saturday night and Sunday morning. Then we grabbed the boy and headed home.

We started loading the new camper: food, clothes, pillows, dog bed, water, while I cooked cornbread muffins to take with us. Then headed for the popup camper in storage to get all of the other camping gear we were going to need. We grabbed sleeping bags, silverware (plastic), dishes (paper), garbage bags, etc. By the time we had grabbed what we could think of, it was almost dark. We were both grumpy. I broke out the cornbread muffins and wild honey and we ate enough to get us to the camp site. We also worked on getting the dogs to walk up the scissor steps into the camper (they were very hesitant to do it without help, although Skittle figured it out first.) Then we closed everything up and headed north to Wyoming.

It is a solid two hours, regardless of anything else, before we reach Vedauwoo. One of our friends told us about stock holding pens for horses in Vedauwoo off of Happy Jack road, so we drove out on Happy Jack trying to locate them. By the time we got there, however, it was too late to explore, so we pulled in on Vedauwoo Road and started hunting a camp site. We found a relatively flat area set off of one of the meandering roads that wind through Medicine Bow National Forest and parked the rig. The wind was blowing and it was in the low 30's when we got out of the truck. The dogs raced around wildly for a bit while J and I dropped the stabilizers on the four corners of the camper. We set up the stairs and we were done. Ten minutes, maybe. Inside I got the propane heater running and went to start our stew for dinner. That's when we realized we didn't have matches for the stove (they were in the popup, we just didn't think about it). Thankfully, there was a lighter with fluid in the truck, so we shared a can of stew and some cornbread. 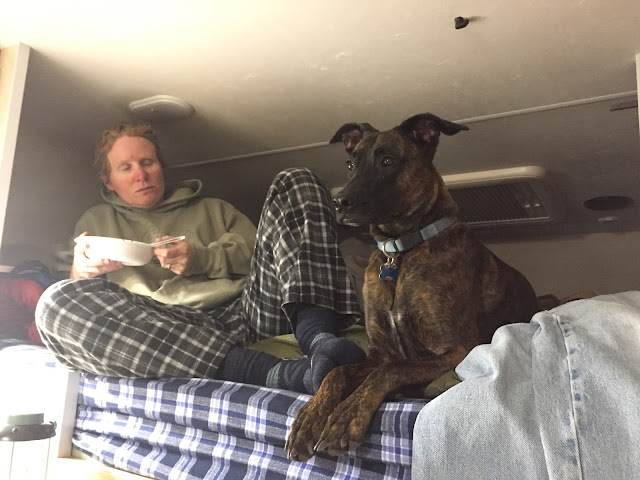 Skittle: Queen of the camper.
J was about to fall asleep eating.

Fifteen minutes later, we discovered that J hadn't filled the black water holding tank, so no toilet. Ooopss. I then discovered: no toothbrushes, no contact solution, no contact holder, no toilet paper. Fuck. I used plastic cups lined with ziplock baggies and filled with water to hold my contacts overnight (and boy was that a joy to put them on the next morning). Then we crawled into bed. J went right to sleep but I did not. In fact, I barely dozed all night long. The roof of the camper is very low and I hit it every single time I rolled over. Both dogs were on the bed and laying on my legs. It just was not a good night for me.

Good thing: the wind roared all night long and the camper never swayed. And you could barely really hear the wind. Also, the propane heater was very quiet and although I could hear it come on, it would have been quiet enough to sleep through had I been sleeping. 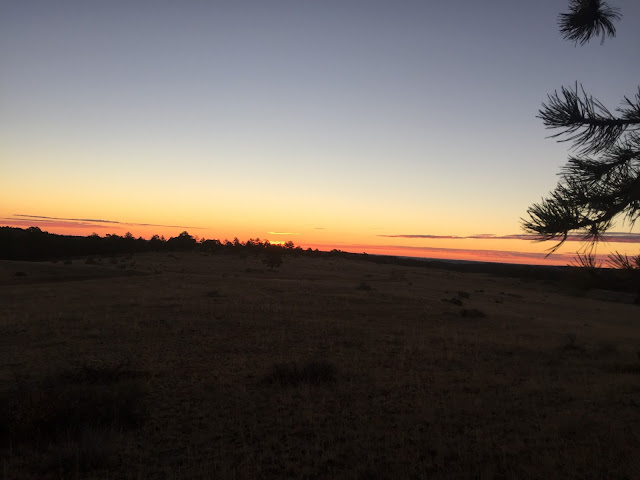 By the time Skittle was ready to get up I was tired of trying to fake sleep.
The dawn was incredible. 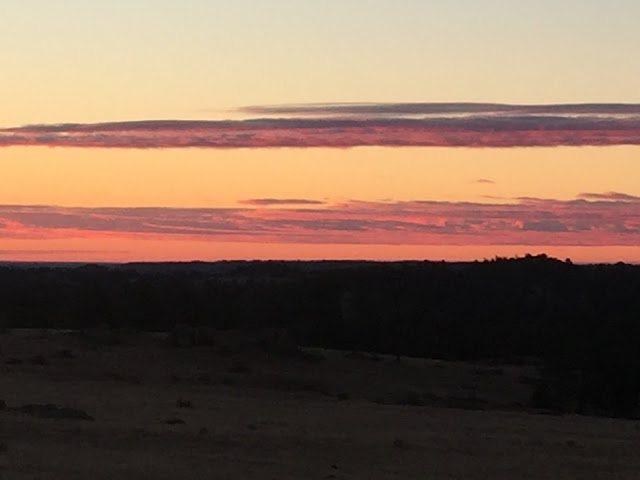 Standing on the rise near the truck looking out of Medicine Bow National Forest. 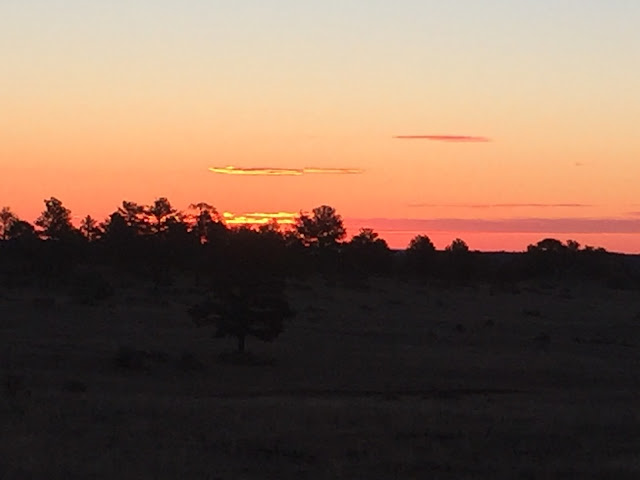 The sun just starting to come up.

Standing there watching the light break across the forest with the lines of a Robert Frost poem running through my mind: 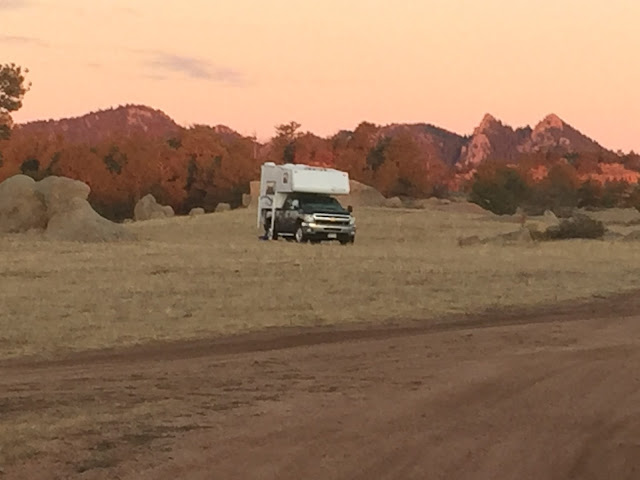 Sully and Tabi in the breaking light of dawn 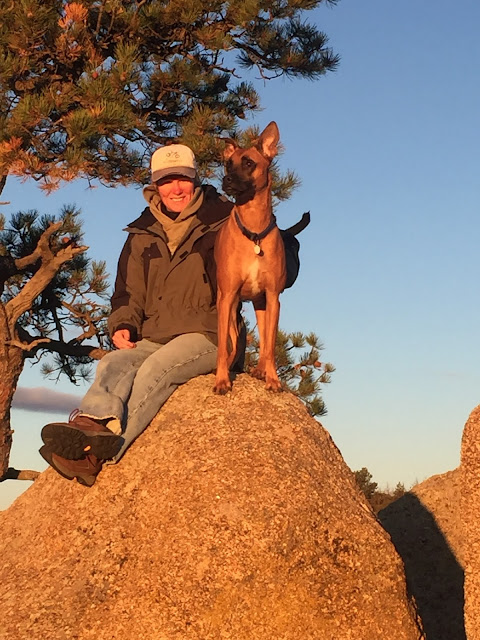 J and Lily greeting the morning 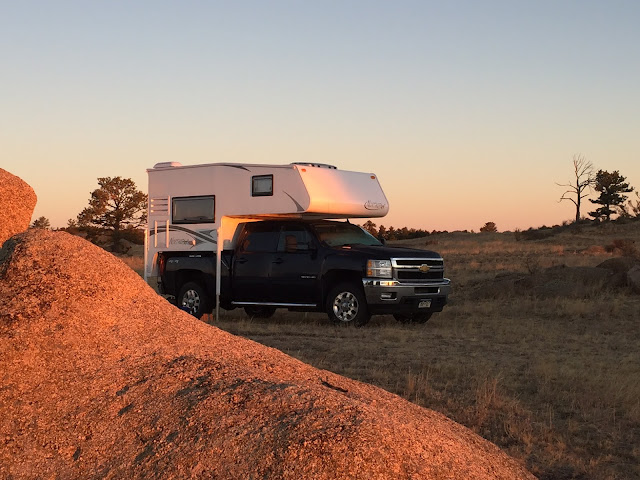 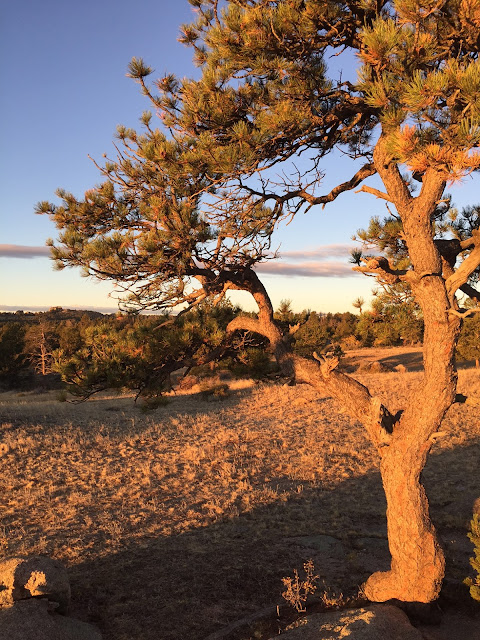 This is my heart place.
This is where I go to be healed of fear, of anguish, of pain, of worry. 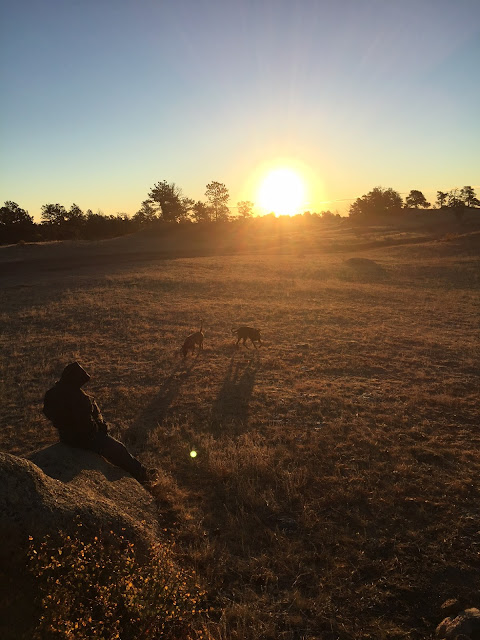 Me watching the dogs and the sunrise. 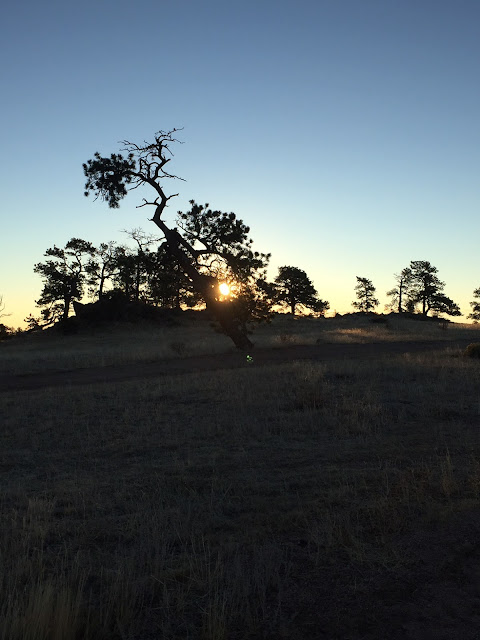 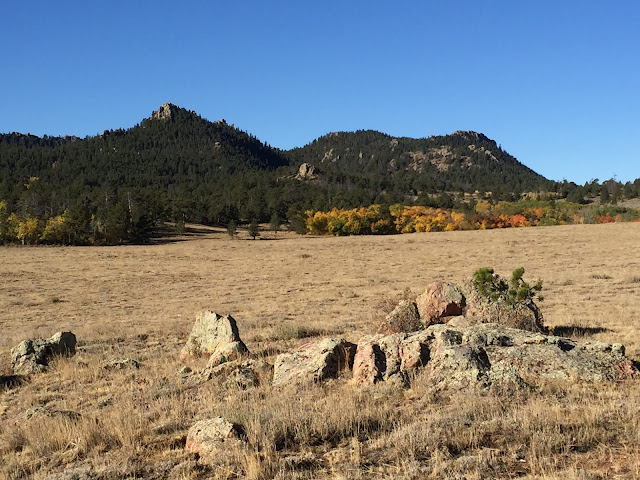 All of Wyoming is gold in the fall.

About fifteen minutes after we got breakfast, I tried to take a shower and there was no hot water. This was disappointing because that was the most important part for me. We did something wrong during set up and had no idea what it was or why there was no hot water (there is a winterizing flow valve that was turned the wrong way so there was no water to the hot water heater. We went back to the dealership on Monday to find out what we had done wrong.) Then J realized the Bronco game was at eleven. We packed up and headed to find the stock pens (just a bit further down the road) although it looked like they were being picked up for the winter. We will try again in the spring. On my wish list is a portable corral.

When we got home, we filled the camper with all of the things that we had forgotten, plus a few more items. Then sat down and watched the Broncos beat the Bengals. Unfortunately, I don't think we will be able to camp again until late April. We will winterize the camper and park it until spring.
Posted by Cricket at 11:12 AM