Saturday we spent the morning accomplishing a task (some of you might have seen the post on FB) that has been on our list since about fifteen minutes after purchasing the truck. I will have a full post after Friday, once every thing is finalized. Be patient, my sweets, all good things come in time.

Saturday late afternoon, we headed to the barn. We loaded the trailer and got Ashke ready for a ride. Our friends M and A showed up about five and we loaded their bikes in our truck, loaded Ashke in the trailer and headed to Chatfield for a full moon ride. We pulled into the parking lot at Chatfield, got Ashke set up with his bucket of food, then ate cold chicken, tomato and cuke salad, fruit salad, fresh french bread with wild flower honey while the sun slowly sank below the mountains. It didn't take long to get Ashke saddled, although he was like a cat walking through water, when I put the Royal Tendon boots on his hind legs (getting another set and a pair of dressage pads this next weekend). They worked very well to protect the back of his hind legs and the healing injury. We walked down to the pit toilet, did our business, and then headed out on our ride.

The first thing I noticed was how much easier Ashke was walking on the path to the river. There are rocks and pebbles and for the first time he was fairly easy on his feet, with very minimal flinching. For the first time ever, he was sound and confident walking across the river, despite the fact that it was almost dark. He went slow, but confidentially across. He has always flinched and reacted when crossing the river (the river bed is very rocky - most of the rocks are head sized) even when wearing the gloves. On the other side, he was ready to pick up a trot and move out. We were trotting next to J and she was saying he was floating in the trot with lots of suspension. I told Ashke he could slow down if he wanted and he shook his head "no" and kept going. It made J and I both laugh. 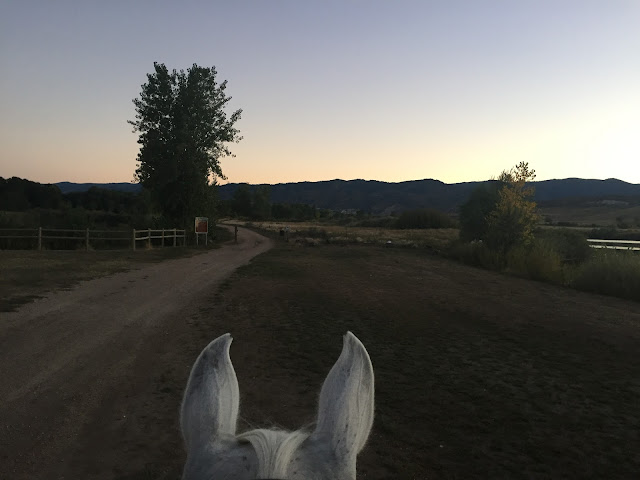 Just about out of light.

After we passed by the lake pictured in my header, the trail turns to soft dirt and he offered a canter. It was, hands down, the absolutely best canter I have ever ridden on him. He no longer felt like he was struggling to move, hesitant to put his front hooves down, or having issues with his hindend. I laughed out loud at the joy in his movement. We cantered 3/4 of a mile, before slowing to wait for the bikes. Then we moved onto singletrack and he cantered most of it, although I made him slow to a trot for the really tight turns. I didn't want to stress him until I am sure all of the residual soreness is gone. The singletrack was so much fun. It's been over a year since I felt confident enough in his feet to let him canter something that twisty.

Then we moved back to a double track road, heading downhill, and the three bikes took off flying. I let Ashke pick the pace since we had just completed a little over a mile at the canter, it was getting darker by the minute and because he gets to have a say in this too. We walked most of the downhill, then picked up the canter once the road flattened out.


A few minutes later, we turned back to the river, to do the river trail back to the parking lot. By this time, it was hard to see the trail and we had a couple of moments where Ashke stumbled and tripped over the rocks and roots, but then he seemed to work it out, since going forward he was sure footed with no tripping. M turned his headlight on and took off ahead. A alternated between following M and using the glow from his light to see the ground or turning her own light on. J preferred to ride in the dark, feeling like not seeing the path was easier than reacting to every rock or root she came across. I followed the light glow of luminescence from J's bright yellow shirt. The trail is still very overgrown and there was one point where we were riding through part of the trail where the trees were grown over the path, a deep dark greeness all around us and J's shirt glowing softly just in front of Ashke's nose. It was magical.

We had to traverse trail that is now being eroded by the river. I was scared and uncomfortable with the thought of a misstep and slip into the river (which is really low, but still) while we were going past that part. Luckily it happened before the pitch darkness following the sunset and before the moonrise where both Ashke and I could see. I could feel Ashke radiating confidence "I've got this mom" as we went along.

There were also a bunch of beaver downed trees to traverse. I had asked M and A that when they came to an obstacle that needed to be traversed, that they wait for me so we could use their lights to negotiate the obstacle. The first required us to jump over two small trees that were down, then continue up a bank to the top. This particular maneuver is difficult enough in the day, but Ashke was a trooper. His jump was small (no deer jumping) and we continued up the bank without issue. Our next two obstacles were downed trees that were too big to go over, so we went around. Then a trunk to step over. The next obstacles were a series of trees downed across the bike path that M was kind enough to bush whack around in front of us, so Ashke could see the tangle of trees and brush we needed to walk through. Once we were back on the path, but J and I knew there would be one more tree to cross (which he leaped last time and almost took off my head on an overhanging branch). When we got to it, I talked him into just stepping over it, another trick that we have been working on.

Finally, as we were walking through the trees, listening to the cicadas and the bull frogs, feeling the bats flit around us, listening to Ashke snort softly but walk calmly ahead, the moon rose. The path and forest was suddenly illuminated by the soft, but bright, orange glow of the Harvest moon. The final half mile was magical. Then we crossed the river again and Ashke was amazing. He was so good. 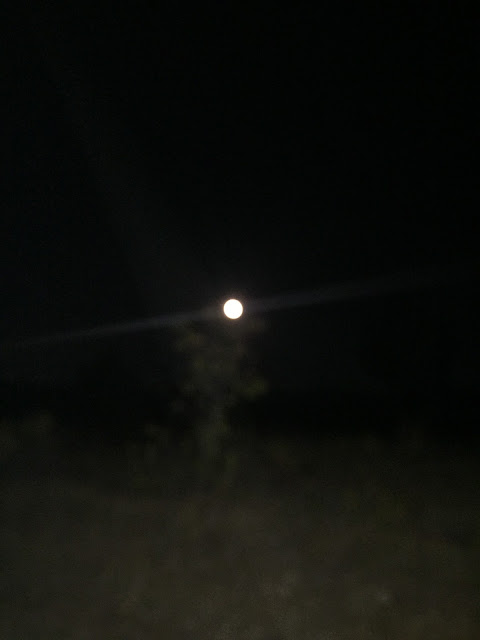 Note to self - pack the BOT fleece cooler for trailer rides home. It is finally cool enough that I need to blanket him if it's getting late.

We didn't get back to the barn until after 10 pm, got him settled and headed home. It was an amazing journey and a fantastic ride with wonderful friends. We will have to try another, maybe in November, if the snow doesn't come early.

Last note*** On Sunday I got tickets to the Broncos game last minute. I went over to see the new Thunder (this is the fourth grey arab they've used and he doesn't spook at the numbers the way the last one did). I was scritching his cheek and asked the handler about his breeding. She said he was pure polish (slightly stockier than Ashke) and I told her that I had a straight egyptian. She was telling me, when he curled his head into my chest and gave me a gentle rub, then pulled back and gave me a kiss on the lips. It was so sweet. I was laughing and so were the onlookers. I said to the handler, "they always know". It made my day. Don't tell Ashke, though.
Posted by Cricket at 10:03 AM