I completely missed the 2 year post for Ashke on April 1st. I thought it might be fun to go back and pull the most significant information from posts by month since I got him. 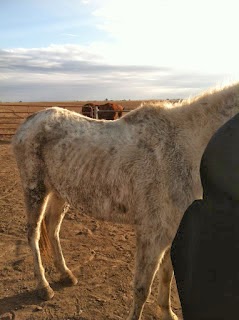 At lunch on Saturday, stopped by the side of the road, I expected Ashke to react to the traffic flying past where we had stopped. He could have cared less. He was much more interested in what we were eating for lunch, in caging slices of bread from L or in walking across the empty lot to inspect the building. He wasn't spooky, he was interested and engaged. When we stopped at the Flying J in Limon there was a man powerwashing the gas station islands. It was noisy and loud, with debris and water flying every where. I was expecting panic or stress from Ashke. Instead, he stuck his nose out the window and turned his body to watch what was going on. He was interested, curious and engaged.

I am Afraid and Other Observations

Because I've been thrown off more times than I can count. I've been kicked and bit and bucked with and I am too damn old to keep hitting the ground. I had my first really serious fall when I was 13 and my last really serious fall in 2006. After the toss in 2006, I spent three years in incredible pain, seeing a chiropractor to fix the damage I had done to my lower back. It was during that time that I told J I was never riding again. And that was my intent. However, that's not how this story has ended.

Not so afraid any more.

I had a pocket full of peppermints I snagged from work. I popped one open and offered it to him. He was so funny. He was trying to eat it but wasn't sure how. He kept dropping it out of his mouth and then asking for another one. He bit one of them and then let the pieces dribble out of his mouth. The entire time he was snorting softly like he couldn't believe how tasty they were. J thought he was trying to suck on the piece of peppermint. He declined to play in the field with T and seemed genuinely concerned he wasn't going to be taken back to his stall. He was very happy when we put him back into his stall. J gave him a decent handfull of carrots, seeing as we got them at Costco, and I left him a couple of more peppermints. He loves carrots, but he also likes peppermints. I just don't think he understands how to eat them. He was just too cute.

What Happens When You Have a Plan

When I got to the stable today, I did what I always do: I called out Ashke's name as I walked down the stable aisle. His stall is toward the end and he can hear my footsteps as well as my voice. He did what he usually does and whinnied loudly at me. It makes me smile. I stopped and gave him a couple of carrots on my way to the grooming stalls. The vet, JD, and Grace were tending to a Friesan/QH mare who injured herself a couple of days ago. JD looks up and says, "that horse sure knows your voice." Made me feel all warm and squishy inside.

That is how I met Cali and became a walking carrot. She had a cut high up on the inside of her left leg, right across the main vein, and had to be stalled inside for a couple of weeks. N thinks it was a front hoof strike from Rhythm. It was also how I first became friends with N.

The thing that got me about last night was his absolute exuberance and joy. Not just about being outside and eating grass, but at being able to run and play with me. Not once did I feel threatened or in danger. He was very careful to be a safe distance away from me when he was acting up. He just felt good and wanted to share his joy. When he first started galloping in big circles, Ashke threw his head up and whinnied. It was his deep-throated, happy whinny he uses when he first hears me in the barn. He wasn't whinnying for another horse, he was sharing his joy with me.

Pride Goeth Before a Fall

Why the hell can't I stay on any longer? I know, age and time and distance. That would have been nothing as a kid. More of a joke than anything else. Maybe that is where the cockiness is coming from - my mind is still eighteen and hasn't recognized my body is almost 50. Damn body. It wasn't even a real hard buck, but it still threw me over his head and onto the ground. I landed flat on my back. Head hit the ground. Thank god for helmet's! Never ride without one. Most of the impact, however, was across the back of my pelvic girdle. I felt like I had been drop kicked.

Endurance
Last night, I had an epiphany. I needed to either make having a horse about the race mentioned above, or I needed to make having a horse about having Ashke. J said to me when I was struggling to put into words my messed up, twisted thoughts, that as long as I could ride him, could do something other than feed and pet him, that she was okay with us not doing a "job". She just didn't want him turning into the world's most expensive pet. I get that. Having a horse you don't ride kind of defeats the purpose (although that sentiment doesn't apply to a trusted companion that is no longer able to perform - end of life issue suck for all creatures). If having a horse is about the race, then I really should sell Ashke and start looking for an animal that can do what I want them to be able to do. One without the baggage, both physical and emotional, that this little grey horse brings with him. 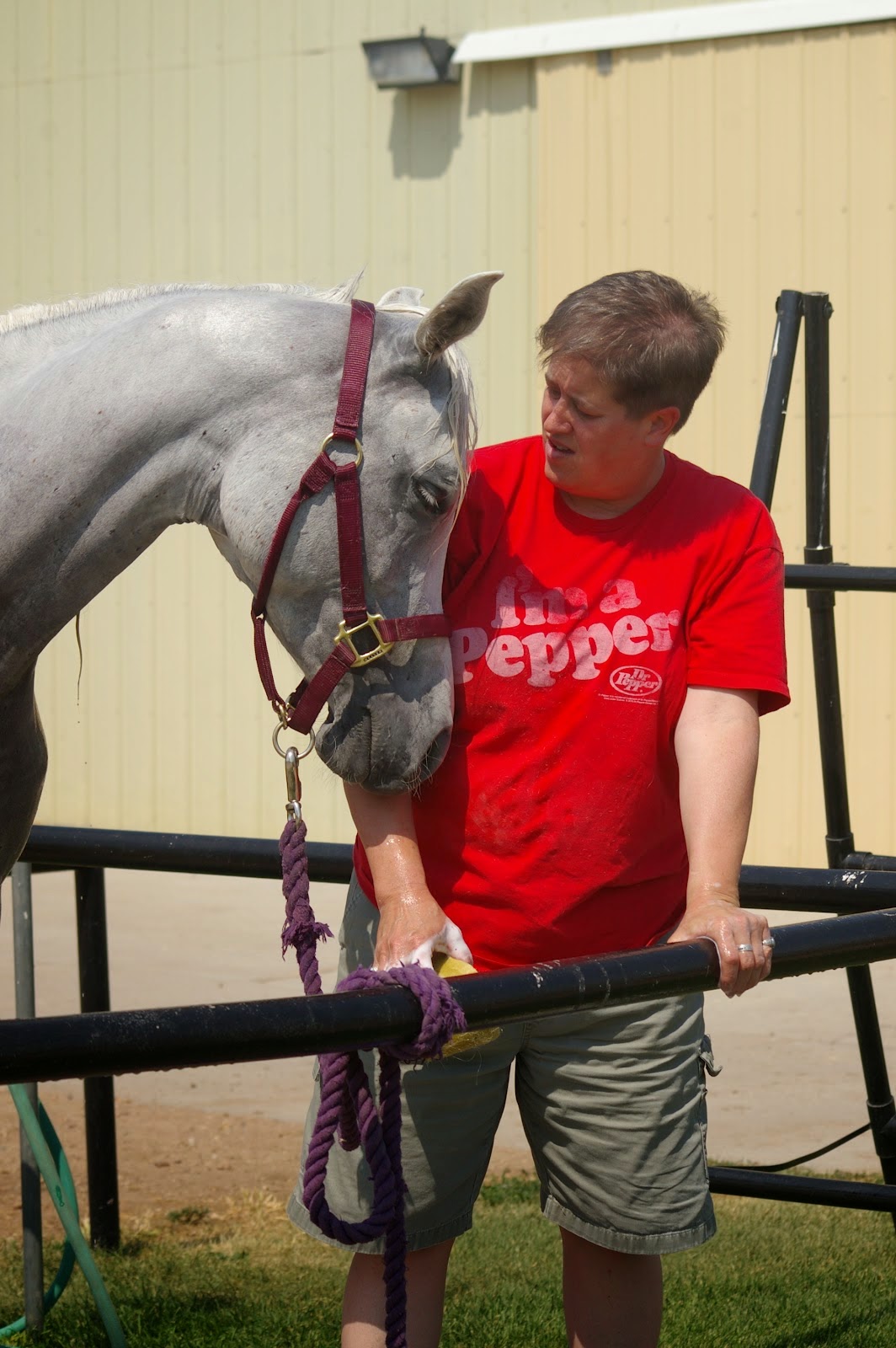 July, 2012
Terrified
The vet left us pain medication and told me to monitor him for increased pain. She said if his bowel twisted it would be downhill pretty quick. We administered a dose at 10:30. When he came out of the pain medication he ate a little bit. By 12:30 the boys were done and J took everyone home. I spent the night in a chair, leaning against the wall where I could see him when I opened my eyes. I gave him a second dose of medicine at 2:00. By 3:30 he was pacing and in constant motion. He pooped a little bit a couple of times during the night, but it wasn't close to his normal amount.  At four, he cast himself in the stall, managing to wedge himself between the door and the waterer on his back. I opened the door and managed to help him move himself enough to get up. He scrapped the skin over his right eye and banged up his back left ankle. But he was up. I moved him to the indoor arena at about 4. He went to the far end of the arena and laid down with his legs straight out and stiff. And then he laid there for the next two hours.

At 5:30 am, I thought he was dying. I called J to tell  her. She woke the boy up and said they would come out. I called the vet and told her what was happening. She agreed it sounded like we needed to put him down. She made arrangements for his body to be picked up. She told me she would be there about 6:30. I texted Grace and asked where she wanted us to put the body and she told me. When the vet got there we went out to get him up and move him. It took some encouraging to get him to his feet, but he finally made it. The vet checked his heart rate. It was 40 bpm. Normal. He walked outside and started to graze. The vet did another rectal and said things still felt displaced but as long as his heart rate was down, we wouldn't take any action.
Such a close call. Although, I do think he was over reacting to the pain. I think it was due to the wormer I treated him with. He had a lot of worms, which hadn't been fully dealt with in April, and their die off could have triggered the incident. Or it could have been sand colic, which I treated him for any way.
August, 2012
We Are Going To Do Up Downs Until Blue is No Longer Tired
I turned him loose in the round pen and he cantered in both directions for 20 minutes or so. There was some bucking. And some head tossing. And a lot of racing around like a mad horse. I walked in the middle of the round pen facing him and let him work it out of his system. I didn't let him stop until he was showing signs of fatigue.

Then we put three poles in the arena off the bottom rung of the pen. This sparked another set of frantic galloping  and spinning and stopping and rearing to avoid having to set over all three poles. We kept that up until he was lathered and streaming sweat. Once he finally trotted over all three poles in both directions we pulled the poles from the arena and I got back on him.
September, 2012
A Forever Home
I know one of the resounding questions I've had in regards to Ashke was whether or not he was going to work as an endurance horse. I think I've had an underlying thought that if he wasn't going to work as an endurance horse, that I would find him a home where he would be loved and worked, just not in endurance. I've flip-flopped back and forth about the keeping him/not keeping him question and have kind of had the "wait and see how he does" mentality.

This weekend resolved any questions about his ability/interest in being ridden as an endurance horse. I now know he has found his forever home.
October, 2012
Murphy's Horse Laws
Murphy's horse laws


November, 2012
A Kind Eye
Yesterday, as I was grooming Ashke, the older woman who owns Katrina (big Saddlebred mare) commented on Ashke's eye. She said, "That horse has a great eye." She wasn't talking to me, but I did overhear the remark and it made me think about eyes and horses.

They say eyes are the window to the soul.

He has his daddy's eyes. And if you look closely enough you can see thousands of years of history with humans flickering somewhere deep inside. Even when he is grabby and nosey and nippy, his incredible presence overwhelms me
This is enough for now. I will pick it up again tomorrow, so you all aren't sitting and reading for two hundred years.﻿
﻿
Posted by Cricket at 9:22 AM