I am achy and sore this week and my body is reminding me that I am not twenty-something any more. Being very busy can do that to a person.

Saturday after I dropped Ashke and the trailer off, I went to Lowe's to gather supplies. I got five foot long pvc 1" pipe to fit into the construction cones to create bending poles, 2x6x8 fir planks (what the fuck happened to cheap ass pine?) to create my own set of numbers, and some 2x4x8 fir planks for my bell hanger. Then I picked up some scrap lumber, which was actually fairly functional, for free and a 4x8' hemlock ply sheet (not mdf) for the bull. I finished my purchases off with 3" wood screws, a couple of magnets and some liquid nail.

Then I got home and carted it all down stairs with minimal help from T (he was primping in the bathroom). By that point I was pretty tired. I drove T to the mall, came home and had ice cream for dinner and did a couple hours worth of ironing. Then I drove back out to get T, came home and had a stiff drink (self-medicating for bed) before seeking my pillows.

Sunday I got up and spent the day making stuff as a gift to myself for Mother's Day. 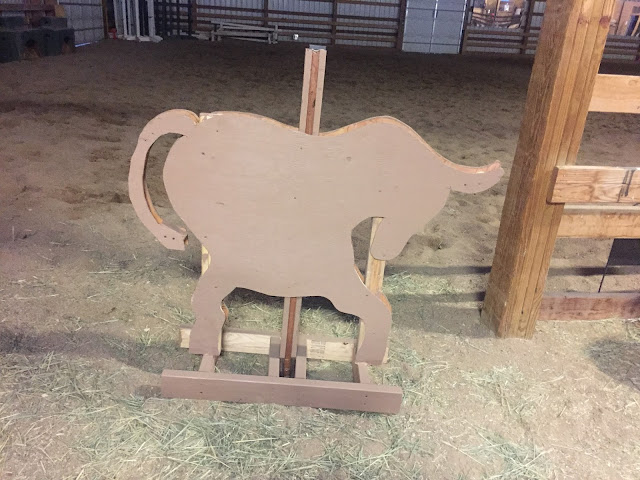 Much more reasonable bull painted with the trim color of paint from our hall.
It's what we had. Light weight and able to be easily moved. Just need to get the ring for the top.
Of course, more burro shaped than bull.

Burro shaped is the best you can hope for with my limited artistic skills, using an image off of the internet as a guide and winging it on the back patio in my pjs. Talented in this area, I am not. But, it is light weight, easy to move and not the size of Paul Bunyan's big blue ox (seriously, what the hell was I thinking?) 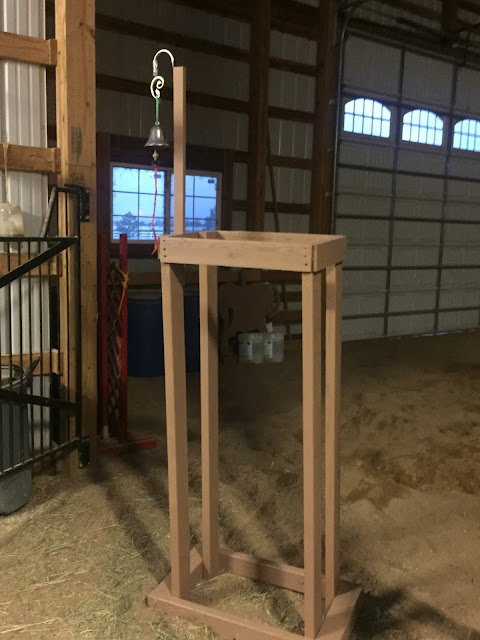 My bell hanger for the corridor with the bell.
Repurposed TP hanger FTW!

Fairly straight forward application of wood and metal to create a bell hanger that will not blow over in the wind. I used two pieces of 4x4 block wood for the ends of the base and am very happy with it. 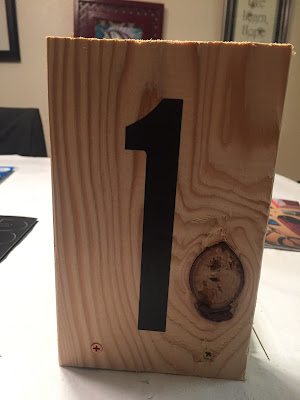 These obstacle numbers were very easy to make and I created 20 of them for about $35
I could paint the wood white first, but I was feeling lazy. I may go back and paint them anyway. 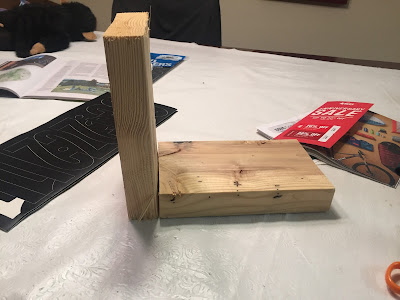 Because the wood is fir, it is fairly light weight.
The base is heavy enough to keep the number from falling down
The black vinyl numbers are 6" tall
I am very pleased.

On Monday morning I could barely move. My hands, forearms and shoulders were exceedingly sore, mostly due to the vibration of using the scroll saw and drill. Surprisingly, my left hamstring was tight, sore and I walked with a limp most of Monday.

Still, I went to the barn and saddled up Ashke.

He was high as a kite and tight as a wire. He was spooking at the shades of sand in the arena. I opted to take him outside and ride the edges of the field. It could have been the weather (we got snow on Weds night through Friday morning - in FUCKING.MAY!!!) or it could have been that he was feeling great after his chiro appointment, but I didn't want to try and contain his exuberance inside.

We did 4.5 miles around the field in about 45 minutes. The first round we spooked at everything. I just worked to keep him at a trot, with some contact between him and I. He spooked at all of the ant hills (nine), the on-again-off-again oil drill (four times), each and every trailer parked next to our trail (seven) and dark patches of grass (four). Our second round, we cantered the quarter mile along the back fence from the far north corner to the piles of manure, then trotted past the manure and cantered to the far south edge of the trail. He didn't try to bolt or fight me, and came back into my hand when I asked, but he really wanted to go. We ended up doing a third round and by the time we were on our way to the gate, he was doing crisp leg yields, a few steps of half pass (easier when we have impulsion) and turns off my legs and seat. He still felt great, just not as up as he had.

Tuesday was my lesson. Ashke was a great and willing partner. His canter is no longer difficult to attain and we do a lot of transition work during all of our rides. He is becoming very handy and I really am excited to ride him around a set course this weekend. The barn is doing a potluck and EOH intro for the boarders who are  interested.

Any way. We finished the lesson starting our schooling for the half pass. It is so hard. Partly because I still am confused a bit about the direction we should be moving. I'm sure Amanda is tired of saying, "uh, no, that's a shoulder in." Although, Ashke tries very hard to figure out which pretzel shape I am trying to make at any given time. He really is a saint.

For your amusement, video: