I'm sure Amanda feels like the lessons have been going on forever. Luckily, she seems to like both of us and is willing to go above and beyond to try and pound some dressage sense into our heads.

Can you tell I wasn't feeling very competent last night? It is possible to lose muscle tone and memory in a freaking week.

This is what met me at the door when I arrived to work last night: 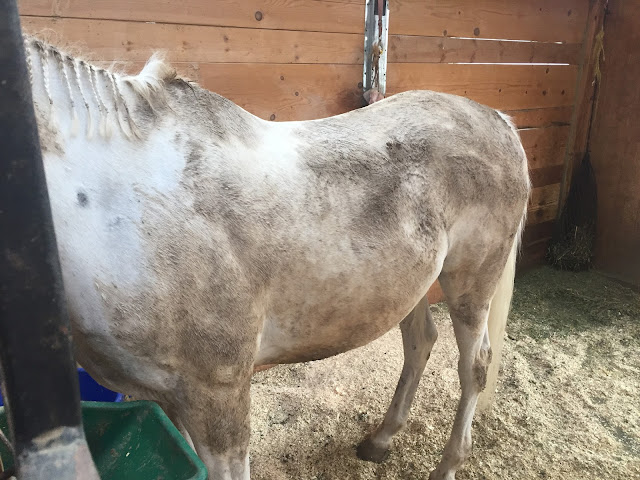 The storms that crashed through our city on Monday night left a giant mud puddle for my boy to play in. It also left golf ball sized hail and a shattered windowshield. 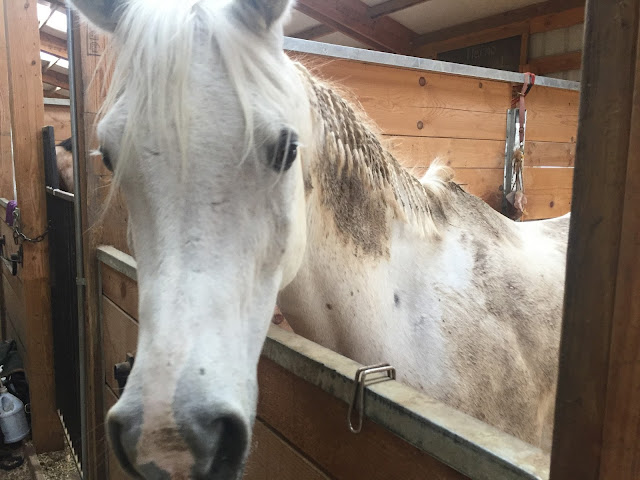 He doesn't do anything half way.

I had expected to find a mudball, so I arrived early enough to be able to rinse him off. Then I covered him with a fleece cooler until it was time to tack up. He stood and watched the lesson before ours while I got him ready.

He felt normal under saddle, although there were a couple of moments when he twitched, but it wasn't enough to call it unsound. Once he felt fairly warm and loose, we moved to the trot and canter. I felt remarkably off kilter and unable to ride. 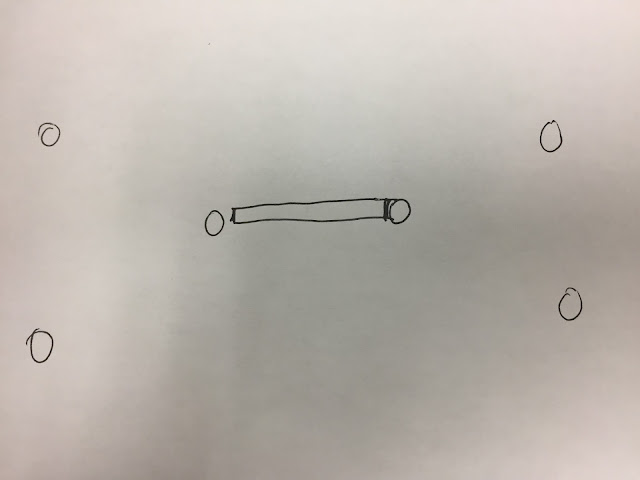 Circles are cones and the bar is a ground pole

Ashke and I did a figure eight circle around the outside of the cones, coming into the center to and changing leads through the trot over the ground pole. It worked very well as a visual cue for the transition and a couple of times, I got my timing good enough to pop up into the canter going over the ground pole. Mostly though, I was off on my timing and cues. It was a great exercise for us and helped Ashke find his balance and rhythm without pulling.

The fourth or fifth time we went through I pulled up in frustration, almost in tears, feeling like I had lost everything we had gained over the long months since last October. Amanda, who is very kind, checked to make sure I wasn't having an asthma attack, then suggested we do some other exercises to get me back into focus.

We did our leg yield exercise from the rail to centerline and back to the rail. Ashke did awesome. Moving from the right to the left has always been more difficult for him and last night he felt stronger than the last time we worked on the leg yields. That settled me and got me using my body better, even though my legs felt weak. I just can't believe that a week off of practice could affect me so strongly. We then did leg yields at the trot, with some shoulder in at the end.

Ashke was a bit spooky at the scary end of the arena. Instead of getting angry or frustrated, I just brought him down to a walk, walked him past the area, then picked up the gait we were working in prior. A couple of times of that and he completely ignored that end, focusing on what we were working on instead. It is a much better strategy.

We worked on shoulder in at trot, then haunches in at the trot. We did okay on our strong side, but I had to slow to a walk to get a good haunches in the other direction.

In between exercises, Ashke got to walk on a loose rein. One of the times we did a really nice stretchy trot along the rail with Ashke actively reaching down for contact.

Our final exercise was pretty cool. We walked with haunches in along the pole, turned on our haunches maintaining our haunches in, then walked out straight. It was really hard work and Ashke did it really well. We ended on that note.