When I got to the barn on Sunday, Ashke was in the big turnout in the front (he has been banished because all he does is fight and play with the geldings in their runs during his turn out) tearing around like a wild man. There was no indication in how he was moving that he was unsound. There was bucking and kicking and being chased by the mare, but no stumpy steps and no hesitation at throwing himself around. It confirms my belief that I will not talk about shows going forward.

We trailered out to Chatfield to do a ride with my friend, B, J and A. B trailered out her own horse and met us at the parking lot. The sky was overcast and the temps were right at 70ish, so I was pretty happy. J and A were both hoping for more direct sun worshipping, but it would have been really hot had that actually happened.


B and her mare, Dazee, were paying their entry into the State Park when we whizzed through the line. I tell you, that park pass is the best money we spend all year. We waited and had her follow us to the parking lot, where we got the horses suited up and ready to go.

We stayed on the east side of the river and headed south toward the Highline canal. 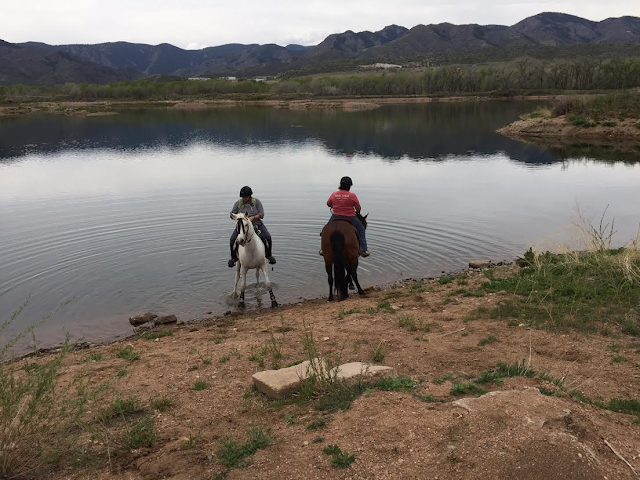 Dead Horse Lake
Ashke thought he might like to try his hand at swimming, but I said no 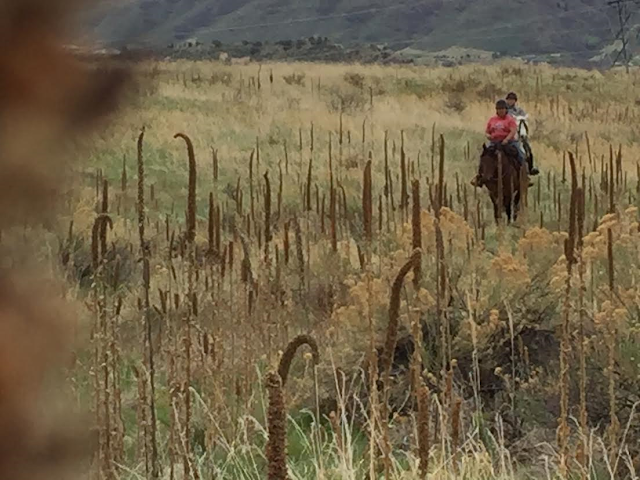 Coming through the mullien 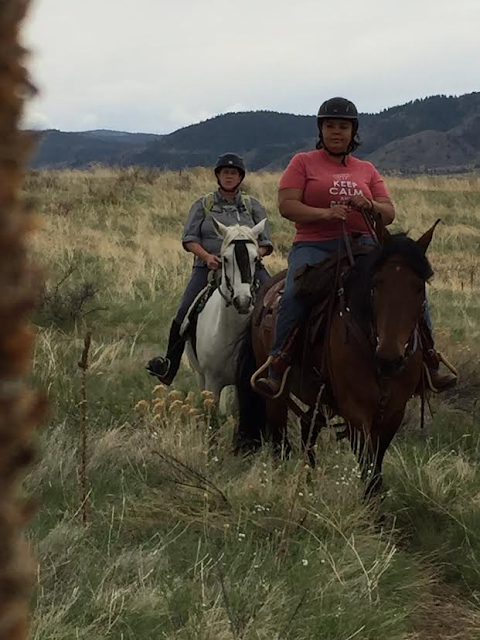 Not sure why neither of us is smiling 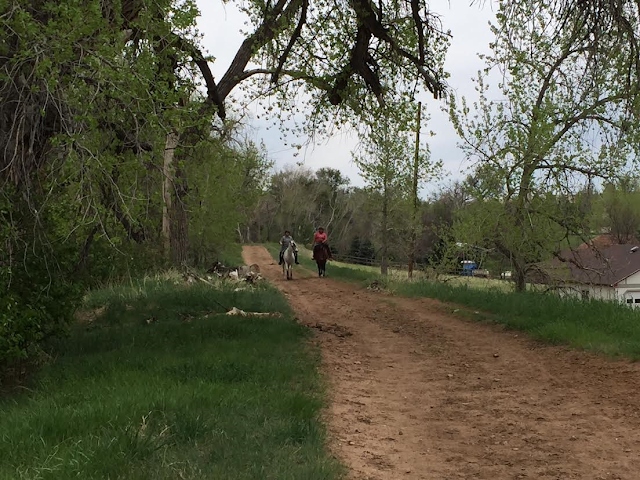 We walked, trotted and cantered at various moments along the canal 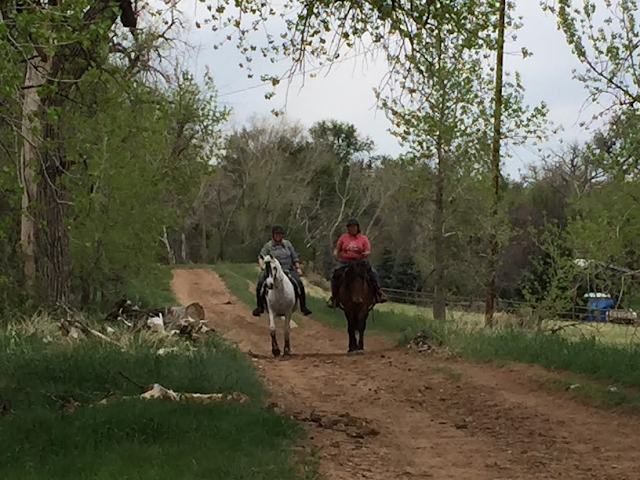 This was largely Ashke's reaction to all of the downed trees along the canal.

There was one point where we were cantering side by side and Ashke was taking turns spooking at the canal, then away from Dazee (cuz mare - although she didn't do anything), and then canal. I slowed him down and told B to continue on if she wanted. She cantered out of sight and Ashke remained mostly calm and responsive to my request to go slower. We were coming around the corner of the canal and I thought, I should make sure to warn B about the wrought iron bench by the eventing field. The trees parted and I saw B standing next to Dazee on the edge of the canal. Ooopps. They were starting to slow down from an active canter when Dazee went backwards and sideways. B was up in the stirrups and leaning forward when Dazee backpeddled. We were all thankful that B was wearing a helmet. She was bruised but not broken.

It took me fifteen minutes to get Ashke to touch the bench. I have no idea why in the world that bench is so terrifying, but it is. 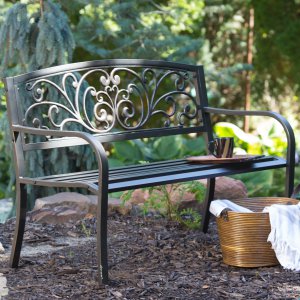 This was the bench.

It was painted green and set at the bottom of a slight incline, off the trail about twenty feet. Most terrifying thing to ever exist on any trail ride. It took me fifteen minutes to get Ashke close enough to touch it with his nose. There was fire-breathing dragon snorts and mini-rearing, plus lots of sideways movements to try and avoid the damn thing. Seriously. What could possibly be so dangerous about a bench. Dazee let B remount from the darn thing. 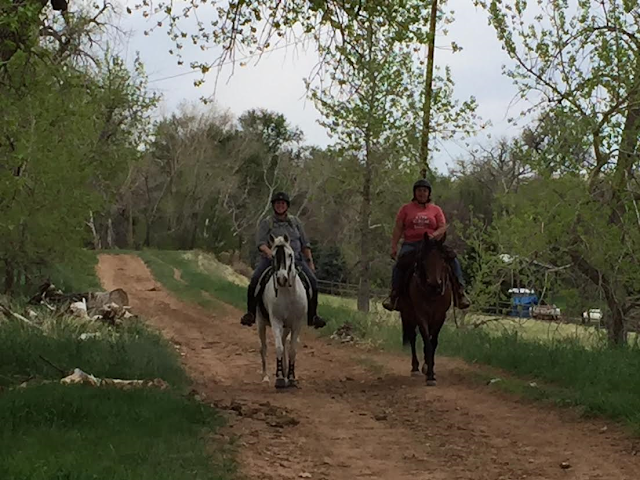 One of my favs. 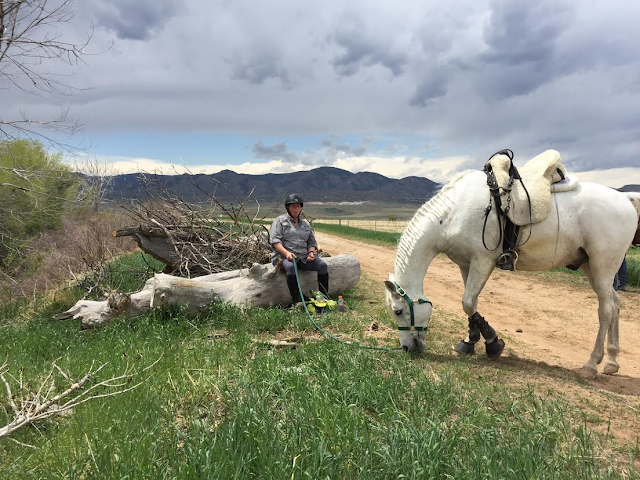 Break to fix a tire. See the sun?

The tire was temporarily fixed and then went flat again. As we stopped a second time (hadn't really left this spot yet), we heard thunder. I was shocked to see the huge black thunderhead that had sprung up to our south, because it hadn't been there a few moments before. It was dark and angry looking, but mostly moving south and east. J suggested the riders get going, since honestly we are the slow spoke in this wheel. It did not take much prompting, since I knew J and A would be able to ride very fast on the paved road, while B and I were going to have to ride the fence line back to the trailer.

It started to rain and then pelt mushy hail down on us, still from a clear blue sky. We were long trotting through the wet grass when Dazee decided she was done. B needed only a moment to straighten her out, but we really couldn't blame her. The rain and smushy hail was not comfortable and the wind was freaking cold. I said to B "people used to die in storms like this". She laughed and we continued on. We were both soaked long before we made it back. B was in the front and we were taking a walk break when there was a horrendous snap of lightning through the air. You know it's close when you can hear the water droplets frying in the electricity.

I got off and B got off too. We didn't want to be the tallest thing on that prairie top. There was no where to hide and I haven't taught Ashke to lay down yet (although that is on my list of things) so we tried to make ourselves small and walked toward the trailer. The rain and hail stopped two strides after we got off and there was only one more lightning strike, far away and less immediate, to the storm. Five minutes later, we got back on and pushed for the trailer. 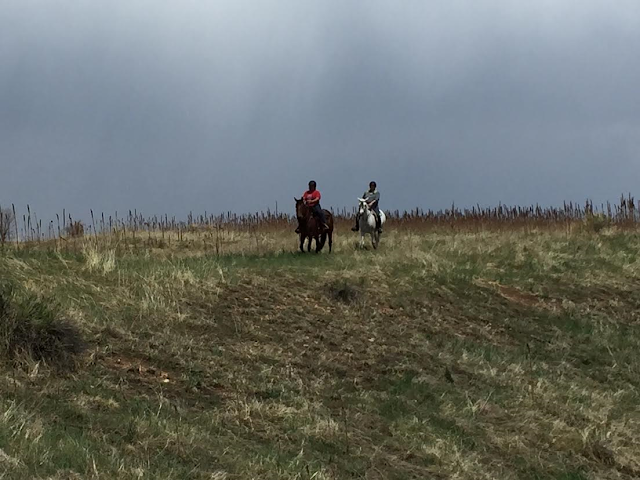 The hill above where we park the trailer 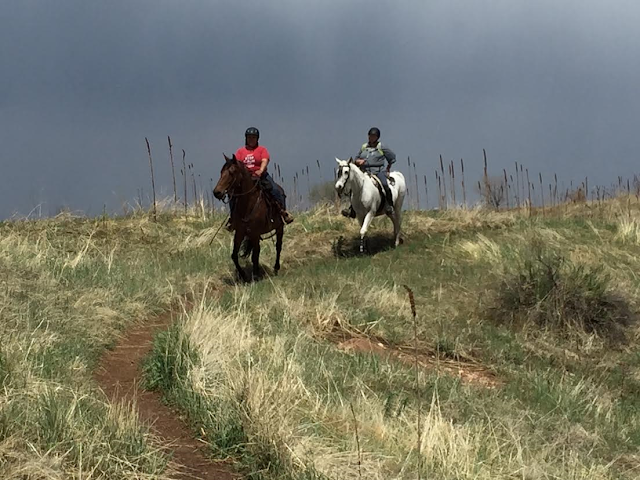 You can see the dark storm clouds in the distance behind us.

At the trailer, we dried off and got a snack to eat. The horses were eating and we were chatting when the next storm came boiling over the mountains. We drove home in horrible weather and Ashke was shaking and trembling when we reached the barn. I don't blame him. The wind was pushing us sideways, there was raining crashing the sides of the trailer like waves and there was not much we could do. Ashke seemed relieved when he stepped off the trailer at home.

The crack I made about people dying in storms like the one we were caught in on Sunday was more accurate than I knew. Eight miles or so south of us, a woman and her horse were killed by lightning in that storm. A teenaged girl is still in the hospital. The weather report had said it was to be upper 70's to low 80's with no rain on Sunday. There was no way to really predict the storm or its sudden appearance. All we could do is deal when it suddenly showed up. There wasn't much else we could do except get off and try to get to lower ground. I was not going to leave Ashke. I am thankful that we got back safely.
Posted by Cricket at 1:56 PM