One of the things J and I have tried to do with our son is to provide experiences that either expose him to new things or things that are fun. For example, the summer he was six (between K and 1st grade) I got us both passes to our local water park and we spent the summer riding rides, splashing in the pool and eating funnel cake before leaving for home. It was one of the most magical summers of my life and one I will remember forever. We've taken him to Disneyland, Disney World, Seaworld, numerous zoos, the Pacific Ocean, the Grande Canyon, the Little Bighorn Battlefield, Seattle, Boston, P-town, and the Black Hills. He's gone camping, gone fishing, hiked, biked, whale-watched, cave spelunked, rollerbladed and rock climbed. We've taken him to Rockies games, Nuggets games and Broncos games. We exposed him to everything we had the opportunity to expose him to.

We've also pushed him to expand his boundries and to this end we forced him to take a voice class last year. He said we were ruining his high school life, but Honeybadger-momma doesn't care. A couple of weeks into the class it was his favorite class in school. The voice class is a year of semi-private voice lessons with a very talented instructor. As part of the curriculum T was exposed to a bunch of different types of music. Imagine our surprise to find that his absolute favorite singer of all time was Andrea Bocelli. T loves opera, actually is able to sing with vibrato and sounds very operatic. And loves Bocelli.

J suggested back in May that we should see about getting T to his concert. I was kind of hesitant, since I wasn't sure he would still be a fan six months later. There was a concert in Phoenix in December that was in the middle of the week. That was the only show close to us that we could really consider. In August, we revisited the concert idea. I asked T if he like Andrea Bocelli still and he said yes. He thought Andrea was the best male vocalist of all time and when I asked if he would want to see him in concert, he responded with a resounding yes. So J and I looked at the concert again.

And holy crap tickets are expensive. The prime seats were $750 each. The mid-arena seats were $300. The back upper deck balcony seats were $140. I asked J if she would want to go (trying to work out how we could drive down and back in three days) and she said we should fly while she stayed home with the dogs. With that set in place, I went on Southwest and searched for flights. I could get a round trip ticket for the same price as the concert tickets. I went ahead and secured the airline tickets and picked what looked like the best seats available in the price bracket we could afford. And then we waited.

At parent teacher conferences we let his teachers know he was going to be out for those two days. His voice teacher was almost beside herself looking forward to his excitement. I was originally going to take two days off, but then I needed to move barns, so I ended up taking Tuesday off as well. After moving Ashke (more on that tomorrow), we picked up T from school and brought him home. J and I had packed bags prior to leaving the house that morning and loaded them in the trunk of the car. When we got home J said she was going to take a shower. While she was in the shower I asked T to change his clothes so he could come with me. He asked where we were going and I said to K's house. He said no, he didn't want to change his clothes and he didn't want to come with me. I told him he needed to change his clothes so Mom could wash them. He stomped his way upstairs and changed, but was still bitching about going with me. I told him if he would come I would buy him sweetarts.

I am not above bribery.

Then he balked again and asked me what we were really going to do. I told him we were going shopping to find J a Xmas present at Best Buy. He wanted to get Krispy Kreme and I finally agreed knowing we weren't getting donuts but wanted him to come with me out of the house.

J and I managed to sneak all of his important electronics into my bag while he was walking the dogs, then kissed her goodbye and got in the car.

We headed for the airport. A quick stop for Sweetarts and back on the road to the airport. T fell asleep in the car on the way, then woke up as we got close. I kept waiting for him to ask why we were at the airport, but we got closer and closer and he didn't say anything. Finally, as we were driving up to the terminal, he got a bit belligerent and wanted to know who we were picking up at the airport. He wanted to know if it was Jay and when I laughed and said no, he called her and demanded to know if she was flying in. She said no and so he called Grammie.

Grammie knew what was happening, since we were staying with her. She prevaricated as best as she could, but that was about the time I was parking the car. T got out of the car and walked to the trunk where he saw the suitcases. His eyes went wide and he asked where we were going. I told him we were going to Phoenix and he said goodbye to Gma. He asked me when J was going to drive out (for Xmas) and I laughed. I told him we were only going for two days and would fly back on Thursday.

He asked why. I told him this was part of his xmas gift. He stared off into the distance for about five seconds, then turned to me and said "We are going to see Andrea Bocelli, aren't we?"

I had to laugh, but didn't answer. He pulled out his phone and looked it up, found the concert and knew. He was so excited.

The flight out was uneventful, as was our night at mom's. On Weds, we didn't have enough time to really do anything, so we hung out with Gma, had an early dinner (or late lunch) and then got ready for our concert. 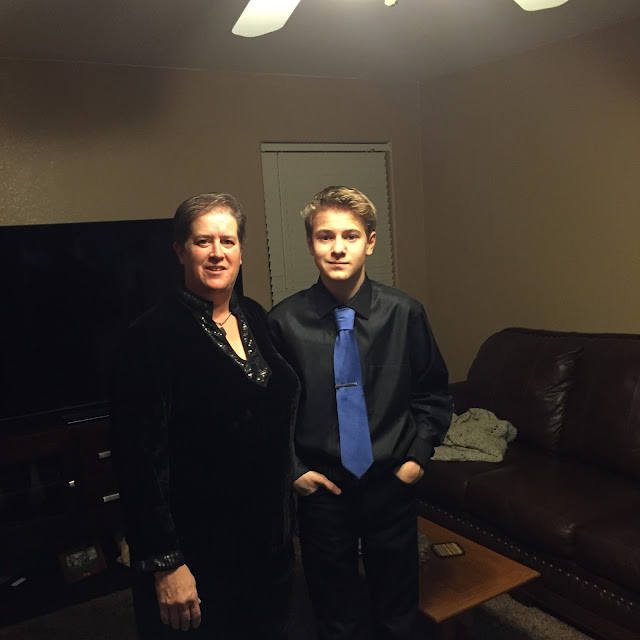 We do clean up pretty good. 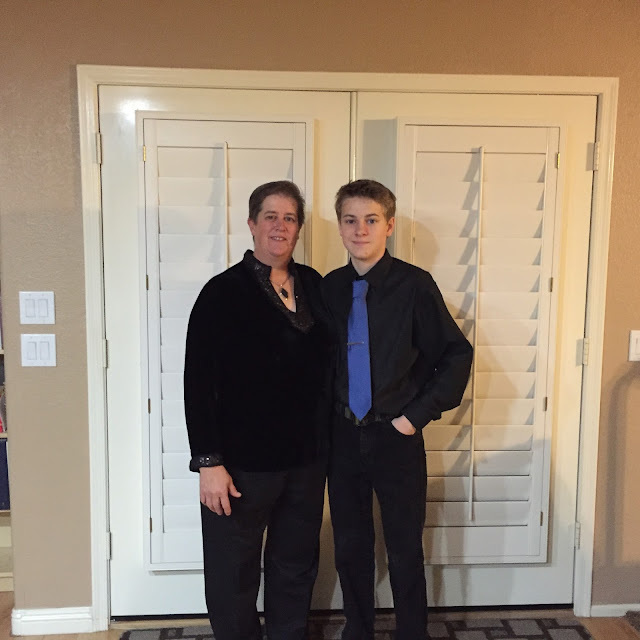 We drove downtown in Mom's car, parking at a park n' ride 40 blocks from the event. My mapquest app drove me right past the PnR and we drove another eight blocks before I twigged to the mistake and turned around. The lot we parked in is used for a huge swap meet and we ended up parking in the very back, under a light. We were walking back to catch the lightrail when the train went past. It was 6:45 and the concert didn't start til 7:30, so I wasn't worried. I was a lot less worried at 7:10 when the trail finally showed up. It dumped us at Talking Stick Arena, where the Suns play, at 7:23 but we had two blocks to walk to the entrance. Security at the concert was intense but we were vetted through and sent upstairs at 7:32. Thankfully, the music didn't start until 7:45. 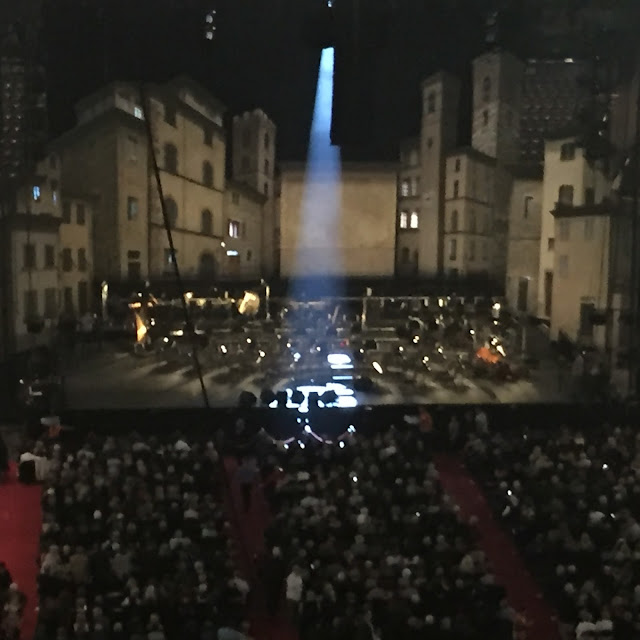 A quick shot prior to the concert starting, since we were told no photos of Andrea.
We abided by the rules, although the woman sitting next to me did not.

At 7:45 the concert started and for two hours we were transported by this man's voice. T held my hand the entire concert, except when we applauded. I was amazed at the music, most of which was opera and in Italian, and even more so by the soft singing T did on the songs he knew. On the second encore, Andrea performed Time to Say Goodbye, which is T's favorite and was icing on the cake. I was amazed by the singer and by my son. Such an incredible experience.

After the concert, we went to the Hard Rock Cafe next to the arena and got dinner. We were both really hungry. After we had eaten we headed back to the light rail. By this time it was almost 11:30, the streets were deserted and I was feeling somewhat vulnerable. I was alone with my son in Phoenix at a lightrail stop waiting for the train. Luckily, I had cast a circle around us before we had gotten out of the car, and no one bothered us.

There was a fairly sketchy guy wandering up and down the lightrail stop talking to himself. I was keeping an eye on him and keeping myself between T and him. He stopped and took his sweatshirt off and laid his bag down on a concrete barrier. He then headed over to interact with a young woman who had just walked up. I was keeping an eye on them (ready to call the police if he got too close or touched her) and joking with T while we waited. As we were surreptitiously watching their interaction I noticed an older black man riding up on his bike. He stopped further down the stop and talked to the young man there, then came on toward us.

As he drew up next to the other man's bag he had left laying there I heard him say,

Then he stopped and gave the blue bag a wickedly funny look, like he was contemplating picking it up. Then, very loudly, he shouted "No, Ricky! No!"

Then he pushed his bike forward toward the other end of the lightrail stop, leaving the blue bag where it lay.

T and I lost it. We were giggling and repeating the sequence of comments. It kept us entertained until we got home safely. I'm laughing just thinking about it. We did kind of take it further:

Anyway, it was a wonderful three days with my boy. We flew back on Thursday and landed safely. I think he had an incredible time and seemed to really enjoy the concert.  J was happy to see us and said she had really missed us. The dogs and cats were all happy we were home.

Tomorrow I go out to see my other boy.