At least I am hoping this is it for a while.

So, to back up, we were at a temp barn for a month, and I have never been so thankful to move my horse in my entire life. I am so glad I knew I was moving, because otherwise I would have been scrambling to find Ashke a place to live.

One of the issues with boarding at a barn that is a private facility, not a commercial endeavor, is that the boarders cater to the owner, not the barn being set up to support the boarders. What do I mean? In a commercial facility, if I wanted extra shavings or my stall stripped or a feed change, I would communicate that to the BM and it would get taken care of. In a private facility that has boarders but is structured around the BO, that isn't always the case. 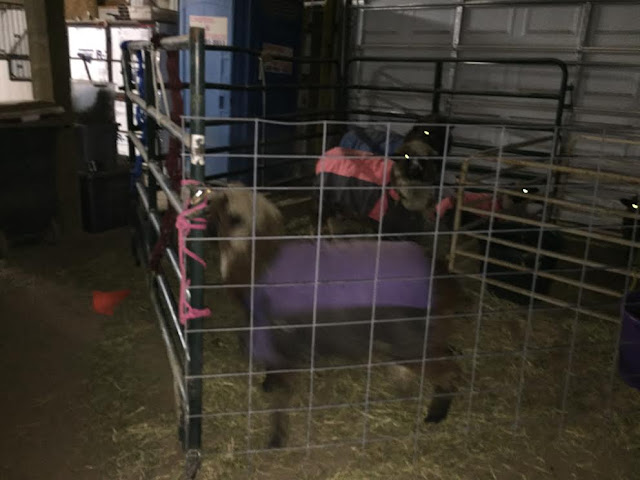 Five ewes and one ram housed in pens in the indoor when the weather was cold enough to freeze their water supply.

Do you know it is not really possible to do anything other than stand at the other end of the arena and snort when there are sheep in there with you? The world according to Ashke stipulates that no work need be done when there are sheep. Just knowing they exist is enough. And then, as if that was not enough, there was this: 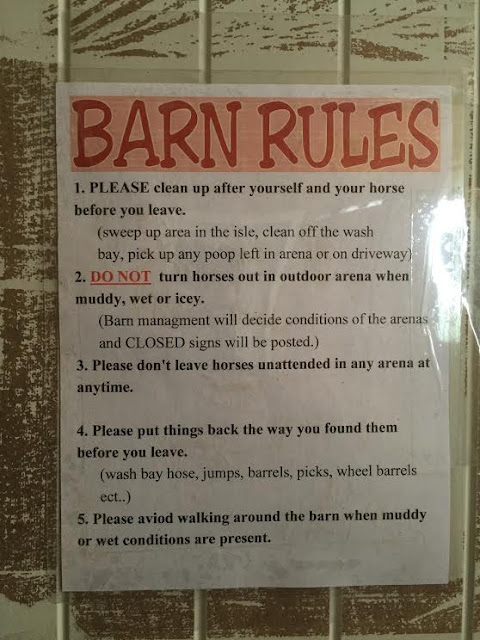 Posted a week before I moved out.

Number one is pretty standard as is number three and four. No complaints there. However, I do not need someone telling me when I can or can not turn my horse out. They don't offer turn out so the horse is either stuck in the stall or ridden in the indoor. With the sheep. They posted closed signs on the arenas and round pen. I have never experienced that before. I think it has more to do with the arena and round pen footing than it does with it being a safety thing. It goes back to the mud issue from using the trailer. Especially when you consider number five. Seriously?!! Avoid walking around the barn when muddy or wet conditions are present. I didn't ask if they meant outside or inside, since I only had five days to go until I moved when this was posted.

The move took five minutes. Literally. I think Ashke was surprised at how short the ride was. Before we moved him, J and I went to Agfinity to buy shavings (10 bales) so we had plenty to bed his stall when we got there. I dumped two bales into his stall and then we let him wander around in the indoor for fifteen minutes before introducing him to his stall mates.

He has a mare on one side and a pushy gelding on the other. The stall is pretty good sized but the run is about the same size, so on the small side. It doesn't matter though, since he gets turn out with other horses for two hours a day. And when he is inside he looks onto the indoor arena, which gives him plenty of stuff to look. Kind of like arena TV. 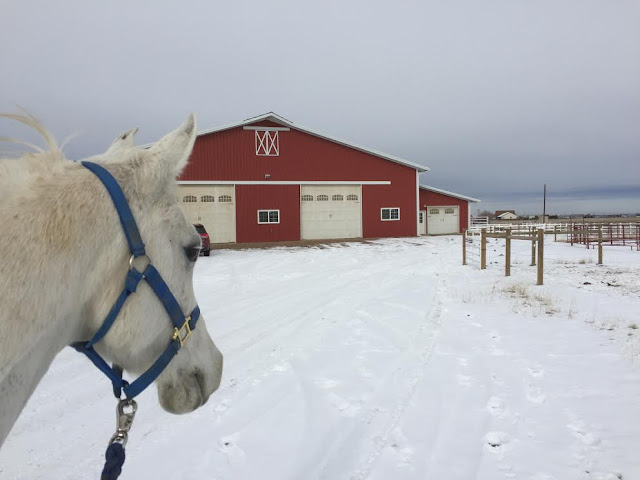 Just stepped off the trailer. 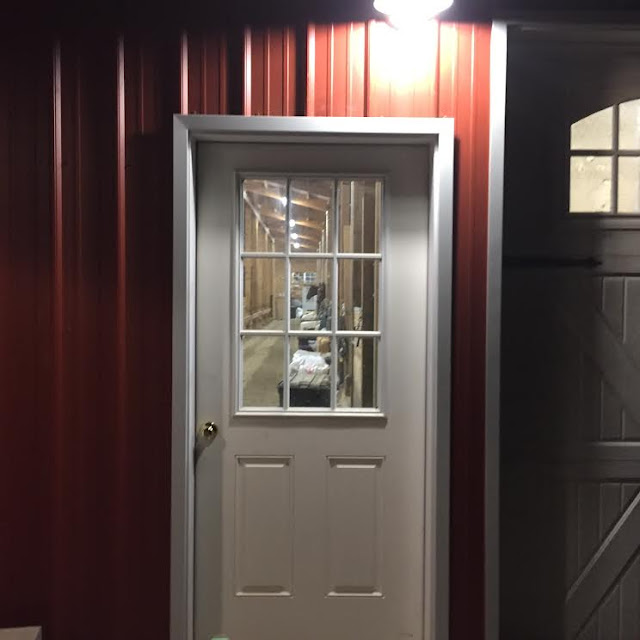 So cheerful and well lit. 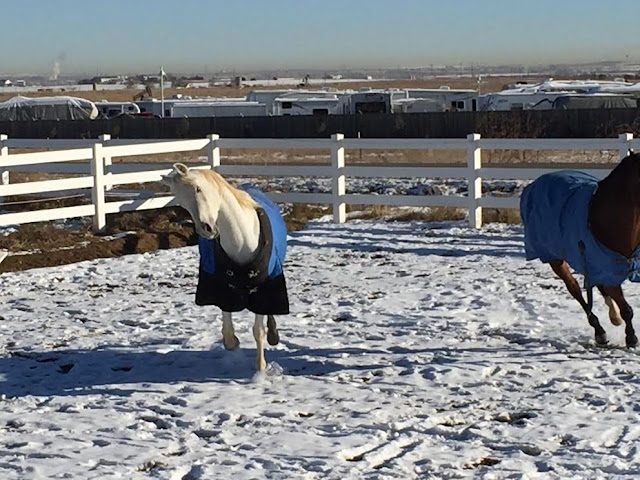 In turn out the first day with Rocko. 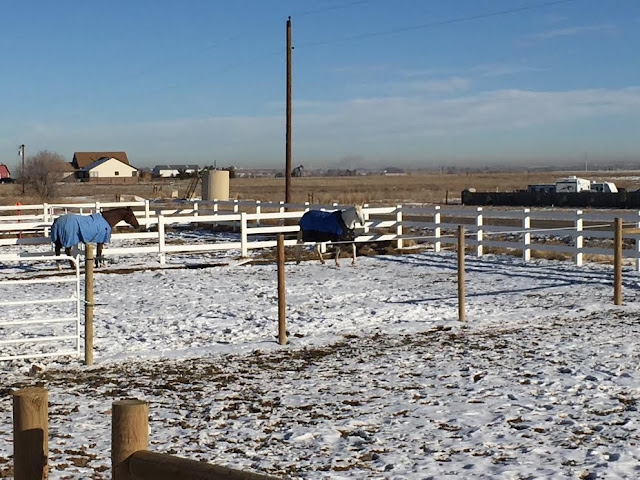 One of the smaller turn outs. Testing Ashke's personality and behavior on a small scale. 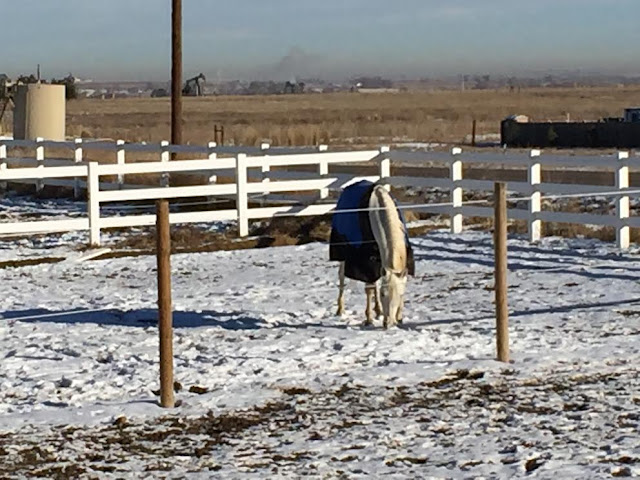 This was the morning after our move in. 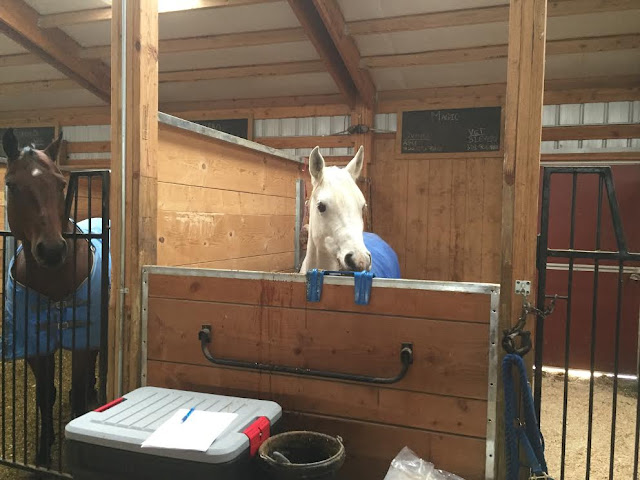 Enjoying his first mash in his new stall.

I went out last night to ride for the first time in the arena. I had no real expectations. My goal was to be relaxed at the walk and trot. I didn't think I would even try a canter, since he reacted so negatively to doing so at SQA. Ashke was a little spooky when I was getting him ready but he settled pretty quickly once I was on him. He stretched down and really stepped out at the walk and was able to relax at the trot. We took a lot of breaks, during which I reconnected with a woman I knew at Christiansens. There were other women riding and Ashke felt very relaxed with the other horses in the arena. 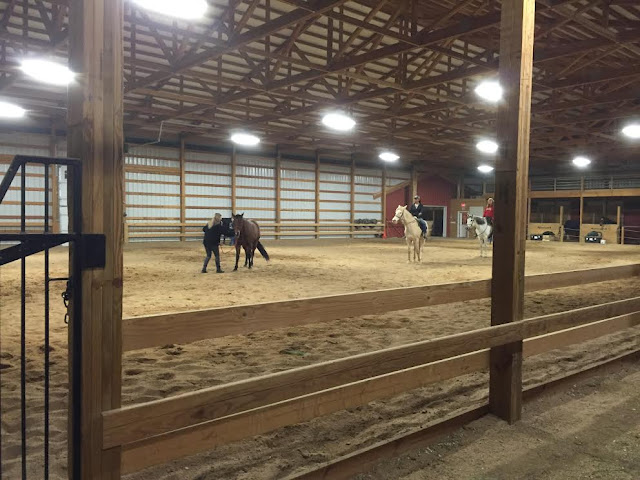 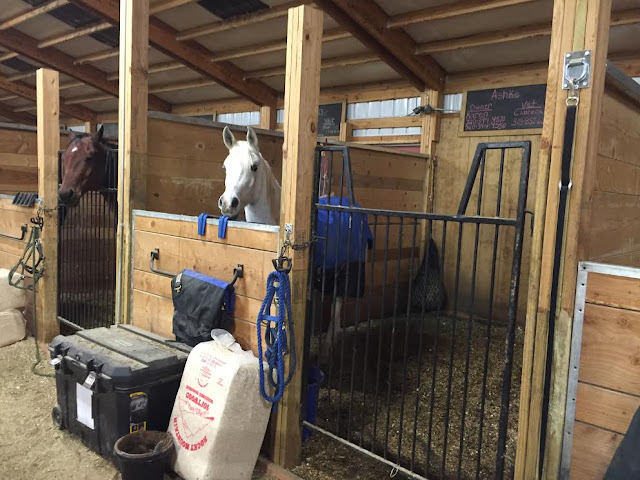 Ashke enjoying his after ride snack while watching TV.

The atmosphere in this stable is so comfortable and he has settled in very quickly. The BM says that he has gone out with five or six different horses and has been great with all of them. She has no hesitation in putting him out with any of the horses on the property. He is sweet and kind to the workers, eats his hay (which he loves), and has felt more relaxed than he has since we left TMR. The energy here is warm and soothing. The BO is relaxed and willing to work with us. It is a comfortable place for him to be and he really seems to like it here.

Best indoor ride we have had since we left TMR.
Posted by Cricket at 2:26 PM