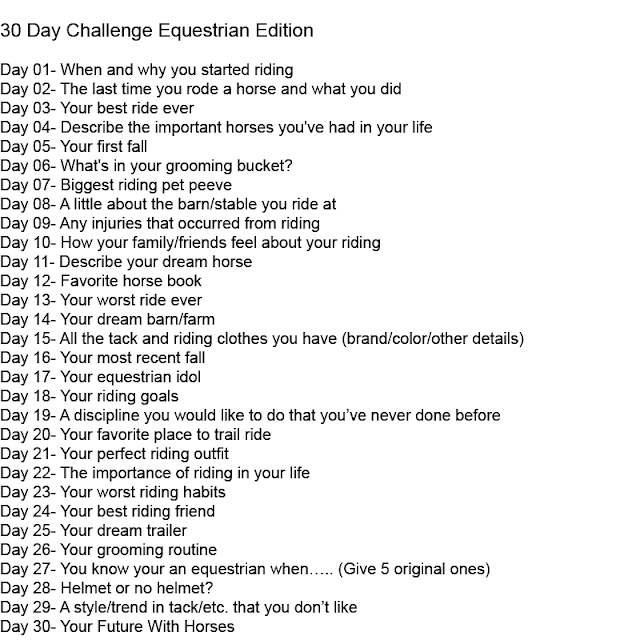 I've decided to do the 30 day challenge, but probably not 30 days in a row. On the days I have a ride to write about, I will do that instead. That way you all aren't expected to read more than a post a day. Because otherwise, how would you get anything done?

Last night, N and I met to ride in the outdoor arena. I hadn't ridden since Tuesday night but N had taken a lesson from Dolly Hannon on Wednesday. I guess Dolly is Cassandra's mentor/coach/trainer and a pretty big name in dressage circles (yes, and now you know I know nothing about dressage but what I am absorbing through discussion and blog posts). I guess Dolly didn't point out anything that Cassandra hadn't seen in N's riding, although I guess she was a little more harsh in her communication style. N wanted to work on some of her stuff, so we measured out a twenty meter circle so N and Cali could work on cantering in a 20m circle. For the record, 20m is just over 65 feet.

Ashke and I worked on warming up slow, although his hip seemed to be fine. We did several circuits of the arena at a long, fast walk, where he is working to stretch and flex, rather than taking short strides. This is the walk that Cali can't keep up with unless she is trotting. After he was warm and loose, we moved to working on the trot. My western roots are showing, because I want his trot to be slow and collected. We have worked a little on extending it, but I'm not sure I am doing it correctly. That will be one of the questions I have for Cassandra on Tuesday when I take a lesson with her.

After the trot work, we did some cantering. We did three or so circuits to the left without stopping, then trotted and then cantered again. Ashke's canter to the left is amazing for about 3/4 of the arena and then he gets rough. I think he cross-canters to take the stress off his right hip. I gathered him up and made him continue and he smoothed out. We worked in that direction until we were both puffing with exertion. Then I walked him until he had cooled and we turned to the right. I forced both of us to go around for three circuits, even though it was tough. I have such a difficult time riding him to that direction and he is so much rougher, but we stuck it out. The only way we are going to get better is if we continue to try.

After that, I was out of breath and soaked in sweat. I don't ever remember it being this hard when I was a kid. We walked it out and then stopped and watched horse trailers driving in to train with Cassandra. N was working Cali in the twenty meter circle at a canter and Ashke was fine with just standing.

At one point N was working the rail, asking Cali to move off her leg so Ashke and I decided to play with the cones we were using to mark out the circle. I rode him in a figure eight around the cones at a trot, using my heel to help him bend around the cone a little more quickly. I'm doing this while neck reining, rather than direct reining him. He caught onto the pattern pretty quick, so I asked him to canter. We blew past the cone the first time, heading for distance pastures. I pulled him around and we worked the figure eight again at a trot. Then we tried to do it at a canter. We made the first turn and I slowed him to a trot, then cued for the other lead. He picked it right up and circled the second cone fairly tightly.  Good boy! We ended on that note and just spent the rest of our time walking out.

Today we get to trail ride with J and T and N and Cali for the first time in what seems like months.